North Carolina Courage and Chicago Red Stars took to the pitch in an exciting rematch of the 2019 NWSL final. Although this match scenario was far removed from the championship match many months ago, the tension between the two teams was palpable. North Carolina surprised no one by applying intense and aggressive tactics when out of possession and in the transition to attack. Through analysis, we see that Chicago aimed to meet the hostility head-on through proactive use of their fullbacks in attack. This tactical analysis will look into exactly how it all played out.

North Carolina engaged in a typical high and aggressive press throughout the match. The Courage pressed in a player to player-oriented fashion with a priority of maintaining central compactness to force play to the flanks.

An aim of North Carolina, when out of possession, was to force play away from Casey Short, the Red Stars left-back and instead towards the Chicago right flank. This was done by closely marking all players on the Red Stars’ left flank and initially allowing space around Red Stars right-back Bianca St. Georges and central midfielder Danielle Colaprico (who would drop into the defensive line to release St. Georges).

This out of possession approach was done with the intent to win the ball on the left flank of the attacking half of the pitch while positioning players centrally for a quick and incisive attacking transition.

Below we can see an example of Courage’s initial set up when Chicago was building out of the back with through a goal kick. The players on Courage’s right side of the pitch were tightly marked even before receiving the ball. We can see that Colaprico and St. Georges are given a large amount of space to entice Chicago to move the ball into that area. We will discuss in the next section, why Chicago continued to play to their left flank despite immediate pressure in the area. 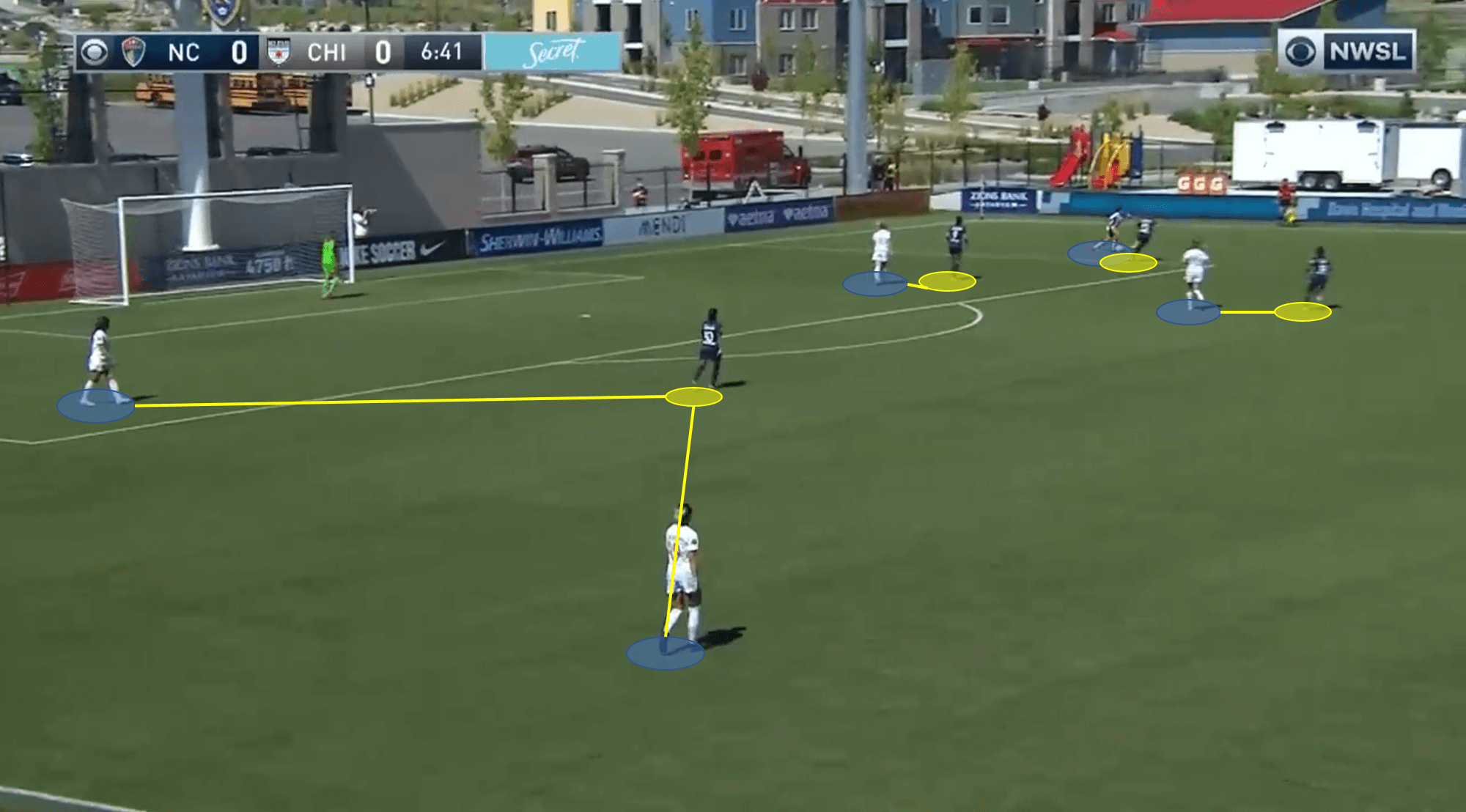 A few seconds after Chicago have initiated possession on their left flank, all nearby players have been immediately pressured. This forces the ball carrier into a sloppy pass forward to the feet of dropping attacker Kealia Watt. As Watt receives the ball she is already surrounded by four Courage players and has no clear passing outlets for escape. Courage win the ball and initiate a phase of possession. 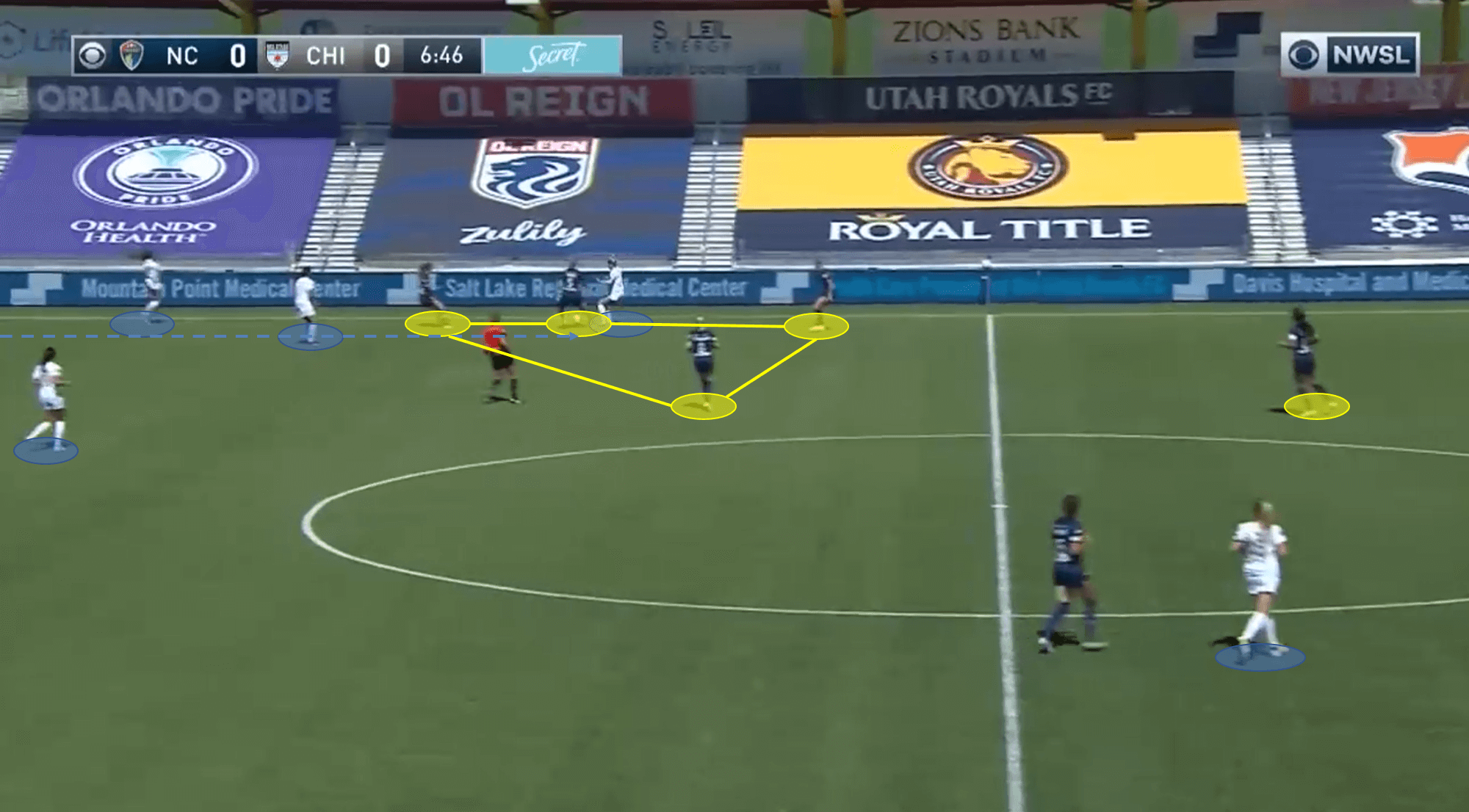 North Carolina primarily wanted to direct play to the Chicago right flank and the images below give us a glimpse of why. In this moment the ball has been played to the current pivot player Vanessa DiBernardo. By design, the DiBernardo is immediately pressured from multiple directions and is forced into a haphazard pass to St. Georges on the flank. St. Georges is unable to cleanly receive the ball and the ball drifts a few metres away. 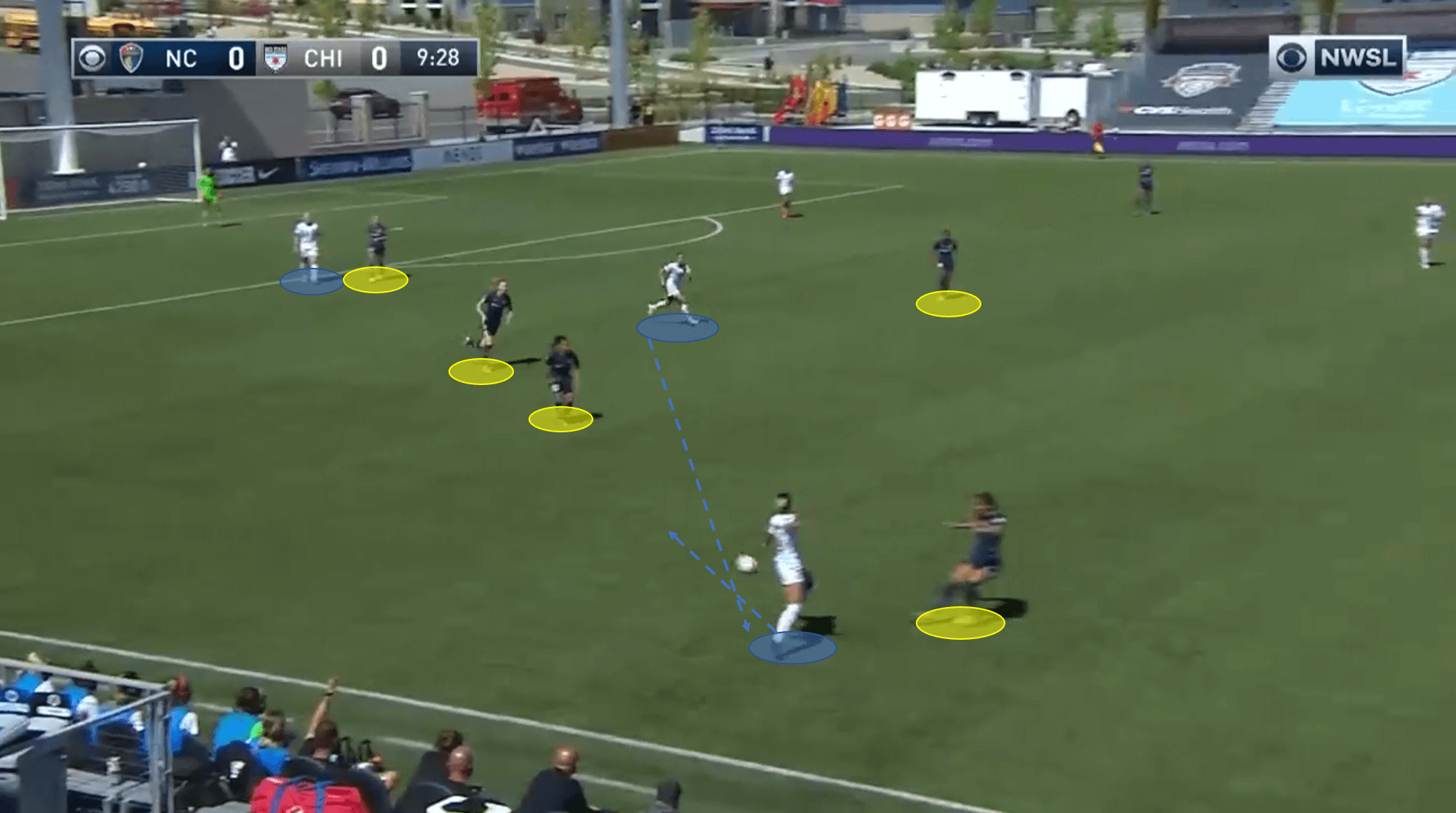 Due to Courage’s central positioning, the players are in an ideal position to recover the ball and immediately begin an attack. As we can see in the image below, within four seconds, Courage have the ball to Crystal Dunn in the central channel directly in front of the Red Stars defensive line.

Courage forwards Kristen Hamilton and Lynn Williams are positioned high in both the left and right halfspaces. This positioning pins back the Red Stars centre-backs while also each creating potential attacking platforms to score. 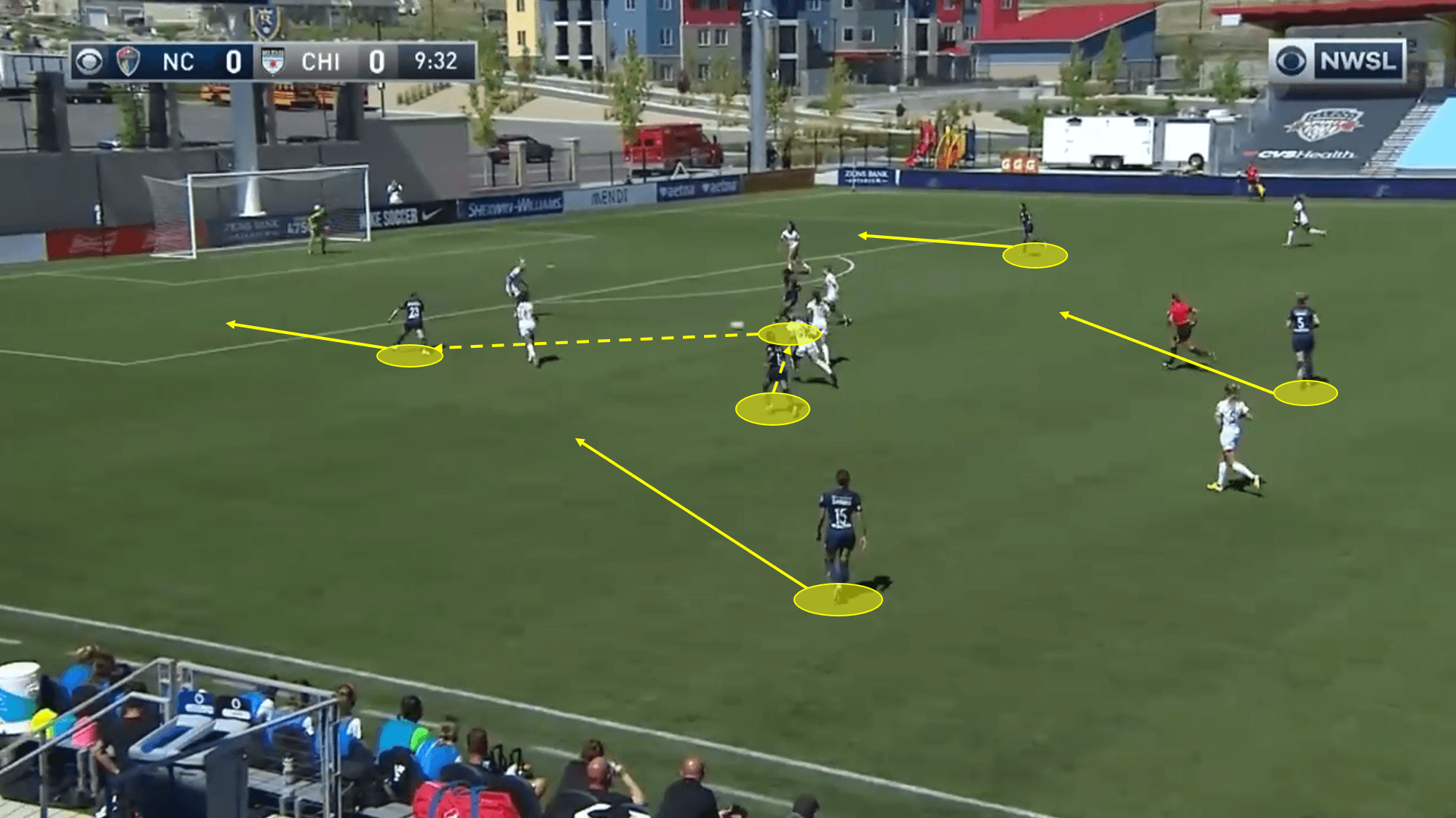 Dunn releases the ball forward into space for Hamilton to run onto and create a chance on goal. Unfortunately for Hamilton, former U.S. Soccer Female Player of the Year, Julie Ertz, is able to track the ball and snuff out the attack.

Chicago: Building up the left flank

As soon as the press had been bypassed, Chicago intended to switch the point of attack to the right side of the pitch where right-back St. Georges had pushed high up into dangerous attacking space.

Chicago utilized left-back Short throughout the progression and encouraged her not to remain stationary, but consistently offer passing options and off-the-ball movements.

Below we can see a moment in which, as previously mentioned, North Carolina aggressively restrict space available to Red Stars players on the left flank. As all nearby players are marked, Short progresses up the pitch to offer an outlet for forward progression. 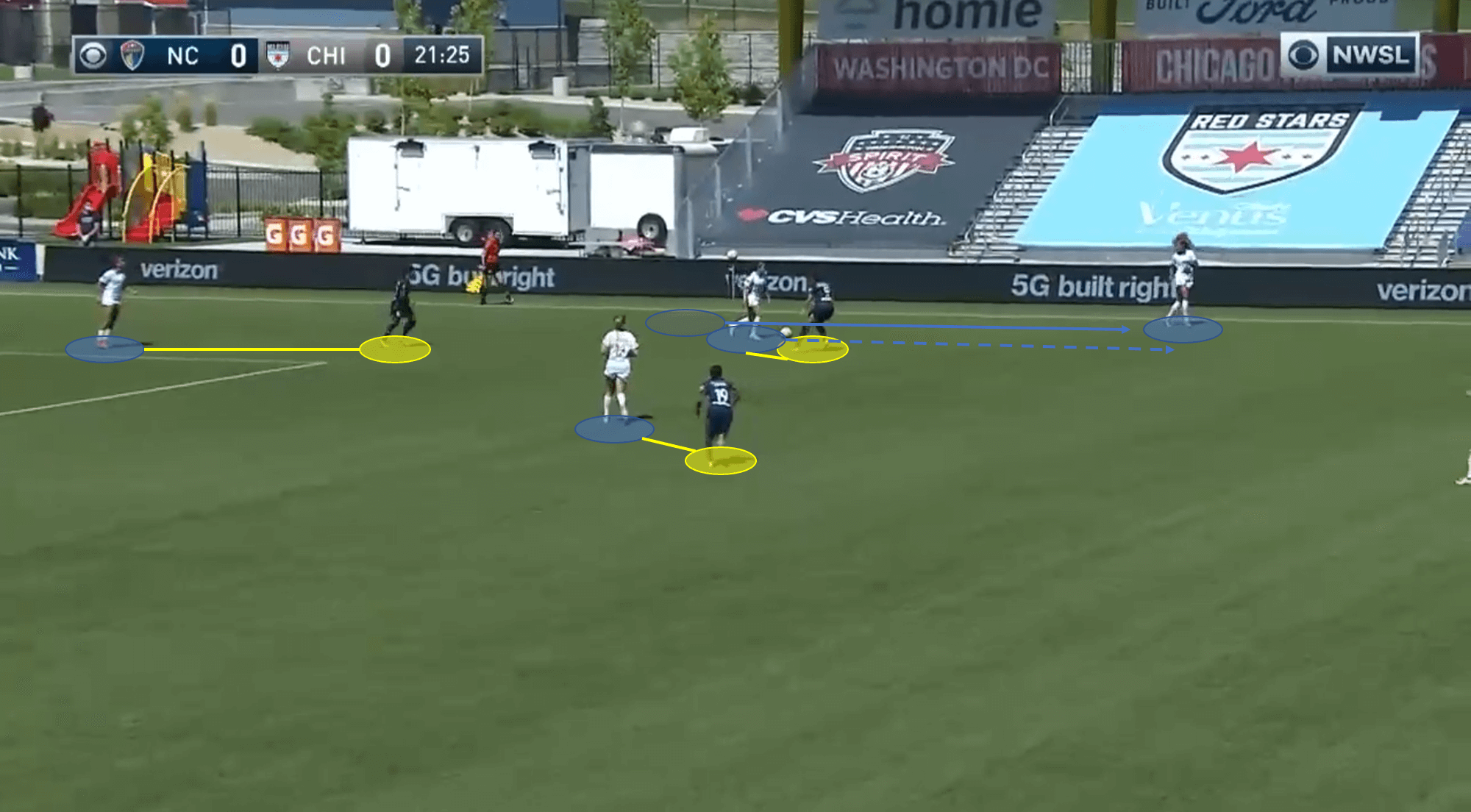 The ball is played to the feet of Short, who is quickly pressured from the front. Short releases a diagonal ball to a deeply dropping Yūki Nagasato and immediately pushes forward into the space left behind her direct pressuring opponent. 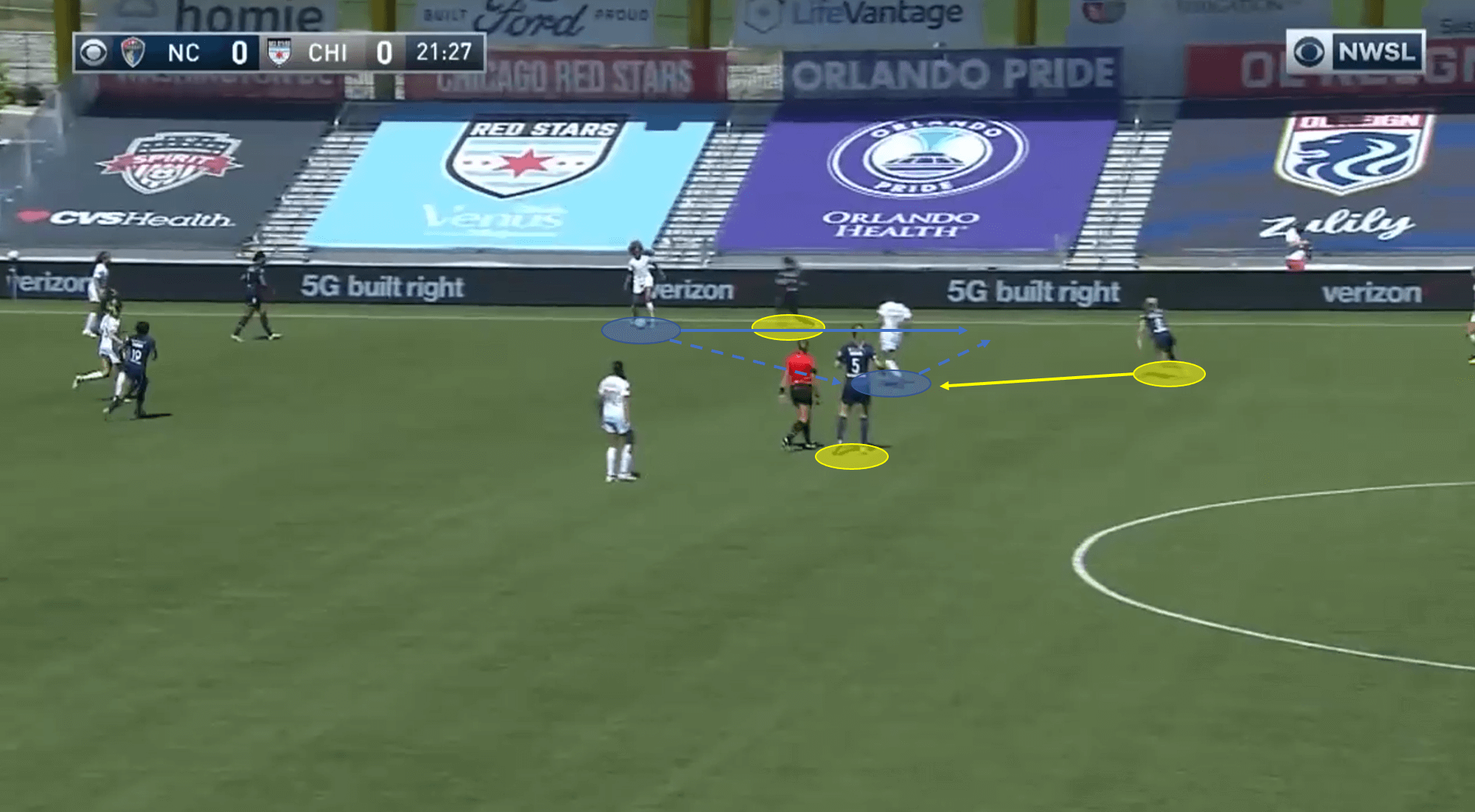 Short then receives a one-touch ball from Nagasato and has plenty of space for forward progression. In the moment below we can see that Short now has at least three attacking passing options as well as the ability to carry the ball forward into space in front of her. 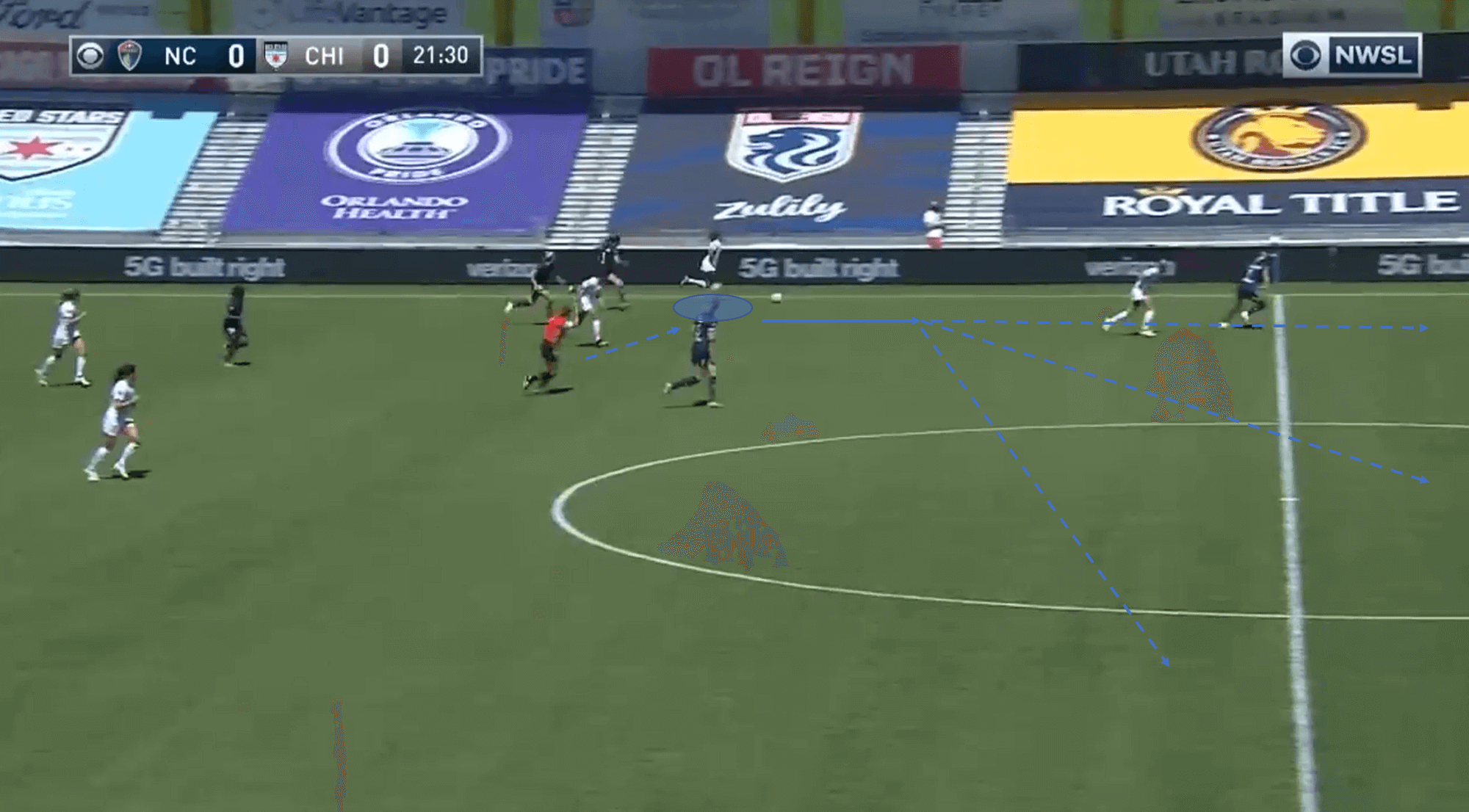 The eventual desire after progressing through the inevitable Courage press was to then switch the point of attack to a now open right flank. As Short would aid in forward progression, St. George would push forward on the blindside of most of the Courage defensive unit.

As the ball entered the Red Stars’ attacking third the ball would be played into space behind Courage left-back Ryan Williams. As we can see below, a 2 vs 2 situation had been created and a rare Chicago chance on goal was created. 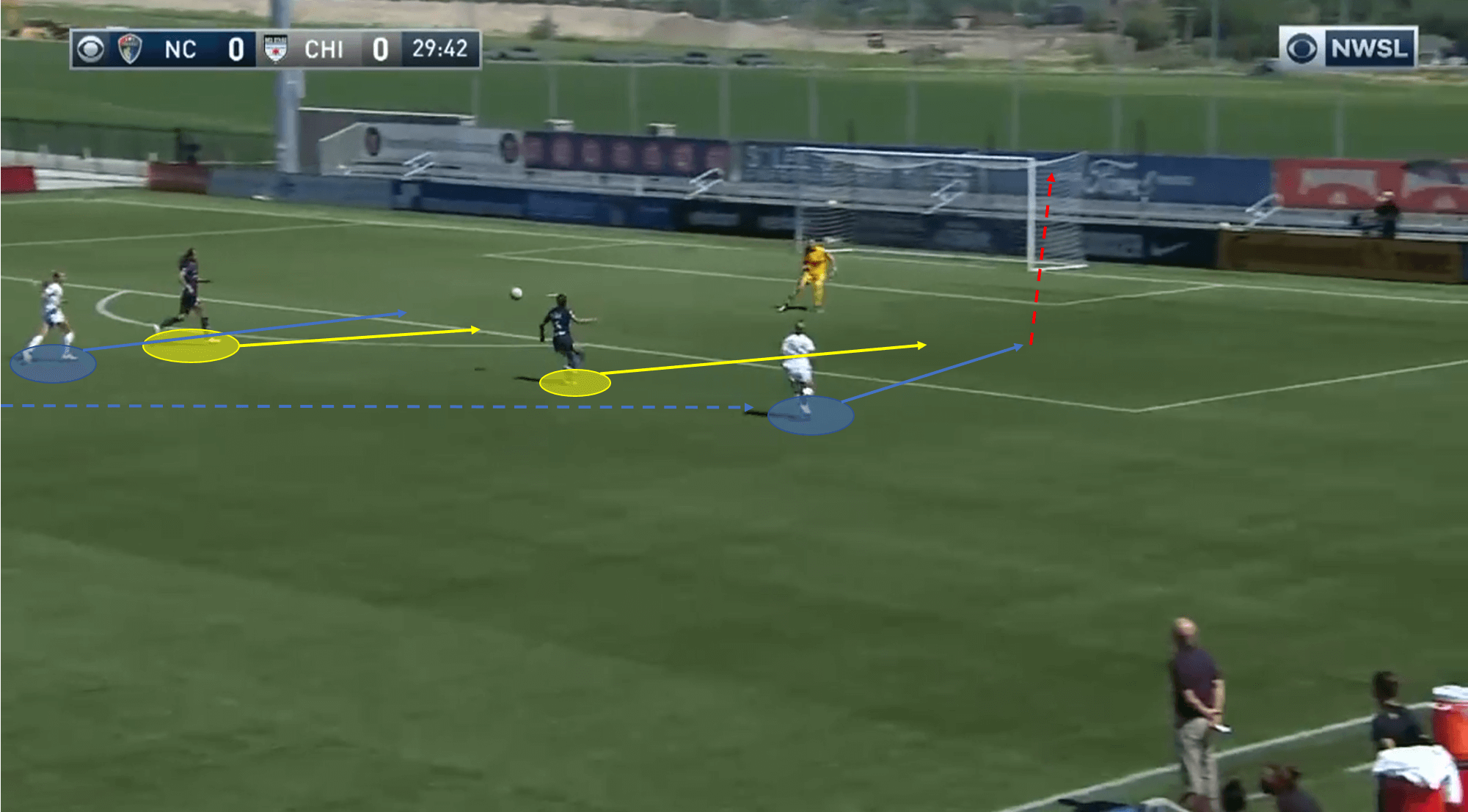 Chicago engaged in this building through the left flank tactic for a majority of the match. It wasn’t until the second half that we saw either team begin to adjust their approaches.

As previously stated, North Carolina’s game model revolves around creating high levels of pressure in the attacking third. This is done with the intention of winning the ball in dangerous areas and subsequently creating an opportunity to quickly attack the goal while the opponents are receding into a compact defensive shape.

Courage’s aggressive pressing not only helps to create attacking situations near the opponent’s goal but also helps to keep the ball as far away as possible from their own goal. This, in turn, also helps to reduce overall goals conceded while simultaneously applying high levels of pressure to the opponent

Using the 2019 season as a reference point, we can see this conveyed in a few statistics. Below is an image of North Carolina’s zones of recovery. A dark shade in the attacking and middle thirds conveys that North Carolina recovered the ball in these areas at a much higher rate than other teams in the league. 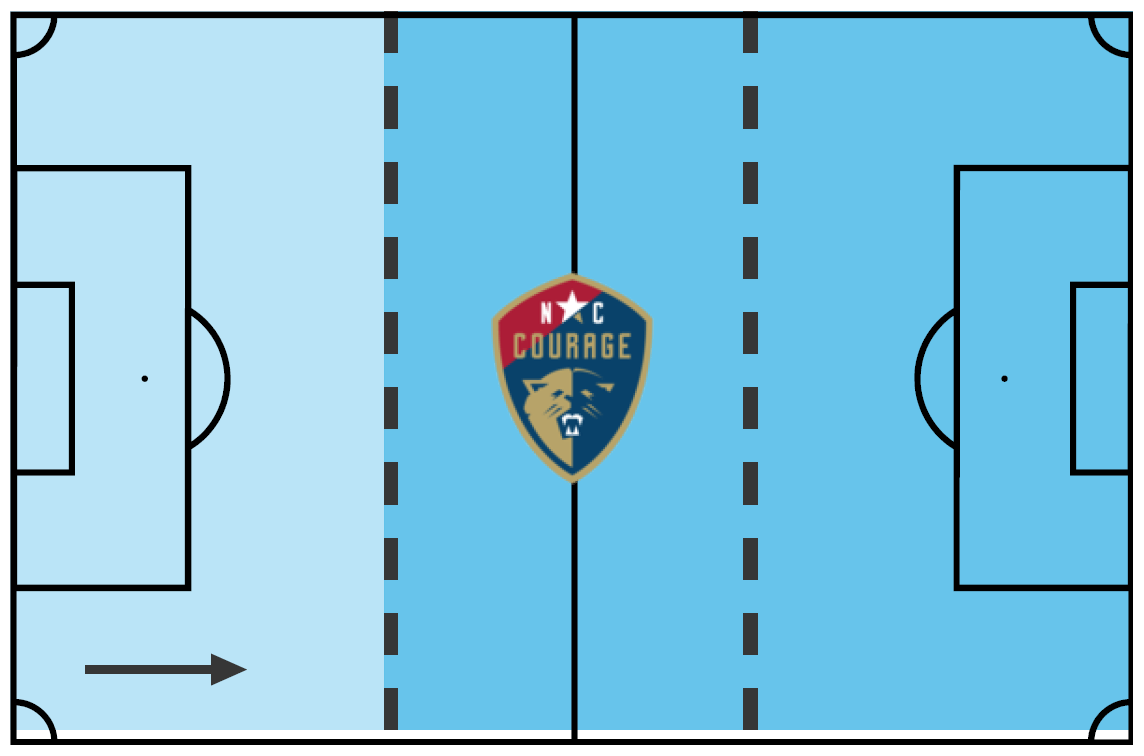 This is further backed up by the fact that Courage’s PPDA (Passes per defensive action) was 6.99. For a reference point, Liverpool’s PPDA heading into the COVID-19 break was 9.1 and La Liga, the highest pressing league of the top 5 leagues has an average PPDA of 9.94 (the lower the PPDA, the more intense the press). Subsequently, North Carolina were the only team in the 2019 NWSL season to give up less than a goal a game on average. The main point being: Courage’s pressing and counter-pressing is at the core of their game model and can be argued to have created the entire foundation for their success.

The reason we summarize the Courage game model is that a chink in it began to develop in the second half of this match. Courage manager Paul Riley’s tactical substitutions in the seventieth minute reduced the disturbance in the game model and eventually led to the sole goal of the match.

For context: the NWSL restart had given teams a little over two weeks to prepare for their first match, which is not nearly enough time for players to return to an appropriate match fitness level. This, paired with playing in Utah on a 34.4-degree Celsius day, meant that shortly after half time, Courage began to lose their intensity when out of possession.

Without this intensity and high level of pressure, Chicago began to more easily find vertical passes upfield through the faltering Courage counterpress. Below we see a moment in which Ertz has won the ball and is given enough time to direct her vision up the pitch. 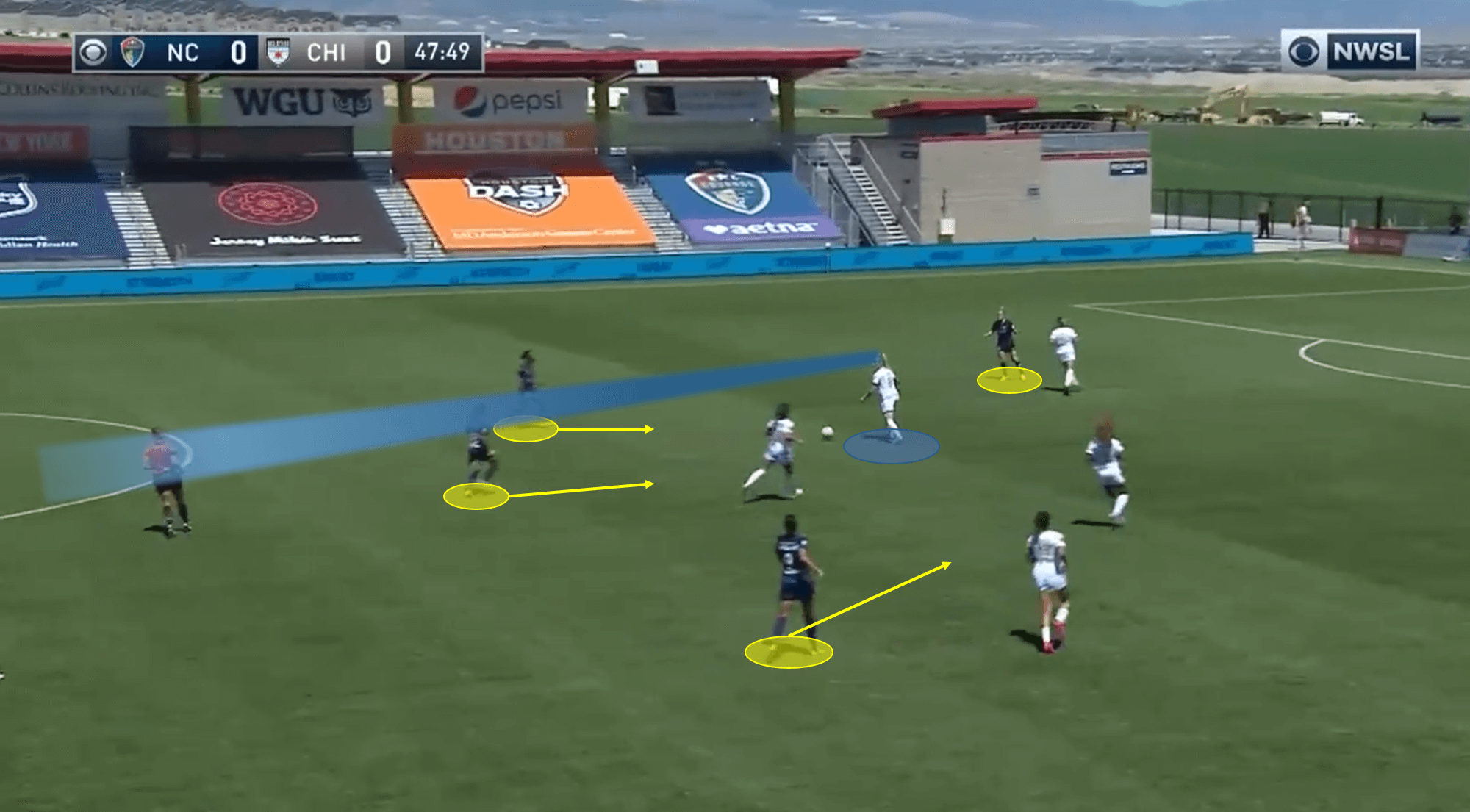 Without immediate pressure, Ertz is easily able to find an open teammate beyond the first line of the Courage press. In the image below we can see that Chicago are able to quickly and effectively move the ball vertically through the middle of the pitch. 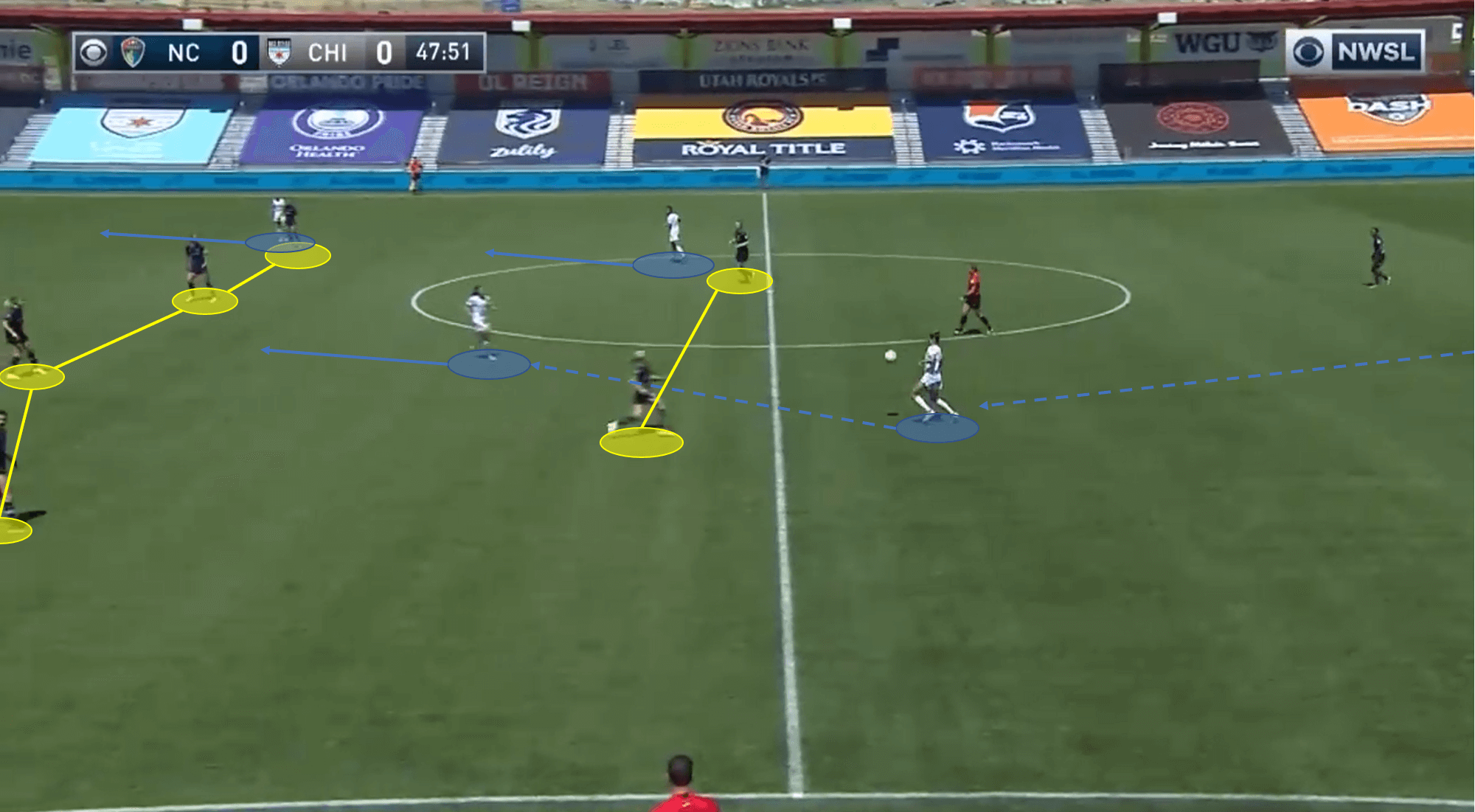 This situation occurred far too many times in the first fifteen minutes after half time for Riley’s liking. In the seventieth minute North Carolina introduced substitutes Lauren Millet and Hailie Mace as a central midfielder and forward respectively.

Their tactical movements and priorities were not drastically different from the players that they replaced. But their fresh legs and intensity when out of possession helped to reintroduce energy into the Courage press and transitional attack.

We can see in the xG dynamic graph below that Courage (black) saw an immediate uptick in expected goals as soon as the substitutes were introduced.

From the seventieth minute on, North Carolina were able to keep Chicago locked in their own half and under constant pressing and attacking pressure. This eventually led to the sole goal of the match and three points for the Courage

This match offered a great example of two teams who stuck to their game plan despite knowing the opposition was directly countering it. This resulted in an evenly matched battle up until the players began to lose the energy required to execute the tactical plans. North Carolina took initiative through substitutions and kept the team performing at a high level. Player energy management will almost assuredly be a deciding factor in multiple NWSL matches in the near future as well.