San Diego Wave met Angel City for the NWSL Challenge Cup’s fourth fixture and the match saw the locals beat their opponent with a 4-2 final score. First of all, it should be said that the 2022 season is going to be the first-ever NWSL season for both teams. Actually, Angel City are holding the 4th spot in a group containing San Diego Wave, OL Reign and Portland Thorns. They only got 1 point in 4 matches and that’s a worrying overall result. Yet, the players and the coaching staff shouldn’t feel bad about this as it is only the start of the season. They should consider the NWSL Challenge Cup as a pre-season preparation for the NWSL since these games can show everyone’s weaknesses and give the head coach a concrete idea of what to fix and what to focus on in the near future. On the other side, San Diego Wave are third in the group with 4 points in 3 games and a match left to play. Therefore, if they win their next game, they will be able to hold the second spot alongside Portland Thorns.

In this tactical analysis, we will focus on San Diego Wave’s attacking and defensive performance while spotting what needs to be improved and what should be consolidated. The analysis will also explore the reasons that led to Angel City’s loss despite being able to score two goals. 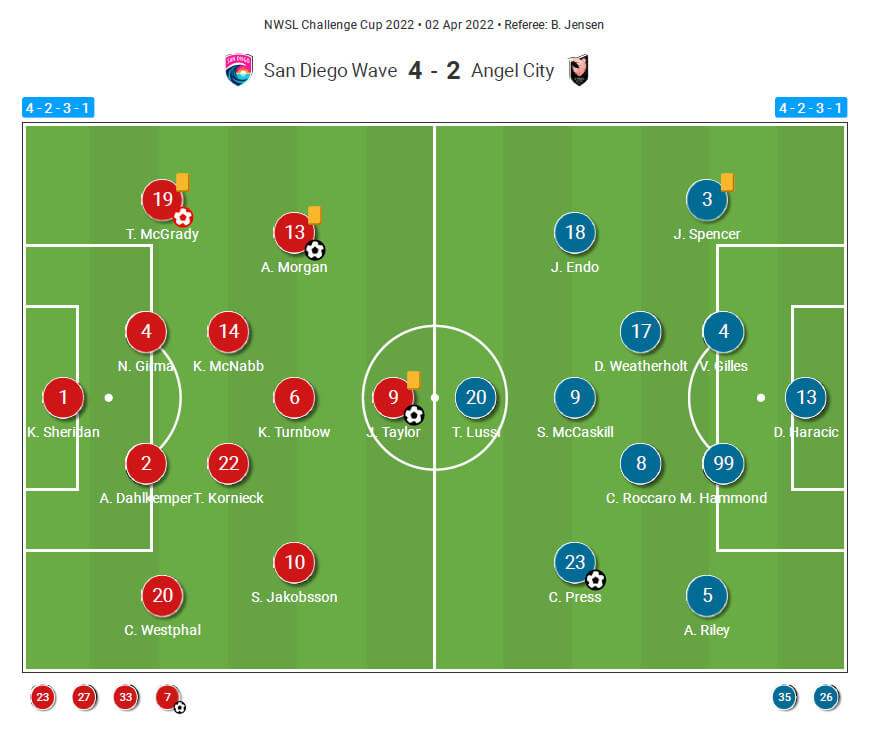 San Diego Wave had a very good start of the match since they were the first to attack, exploiting the fact that they were playing at home in order to put extra pressure on their opponent in their own half. That was clearly noticeable in the first 20 minutes in which they succeeded in creating a couple of chances before scoring the first goal of the match. It was an action that started from the left wing in an attempt to serve Morgan who was waiting inside the box before deciding to ask for the ball and move to her left at the last second in order to escape from marking. That intelligent movement enabled her to anticipate the defender’s clearance attempt and collect the ball successfully. At the same time, she saw Taylor and Jakobsson asking for a cross on the far post and therefore she quickly opted for a cross instead of going for a shot, since she was also surrounded with opposing players. Taylor then knew how to deal with the cross accurately after a first saved attempt, scoring San Diego Wave’s first goal and exploiting a marking error from Angel City. 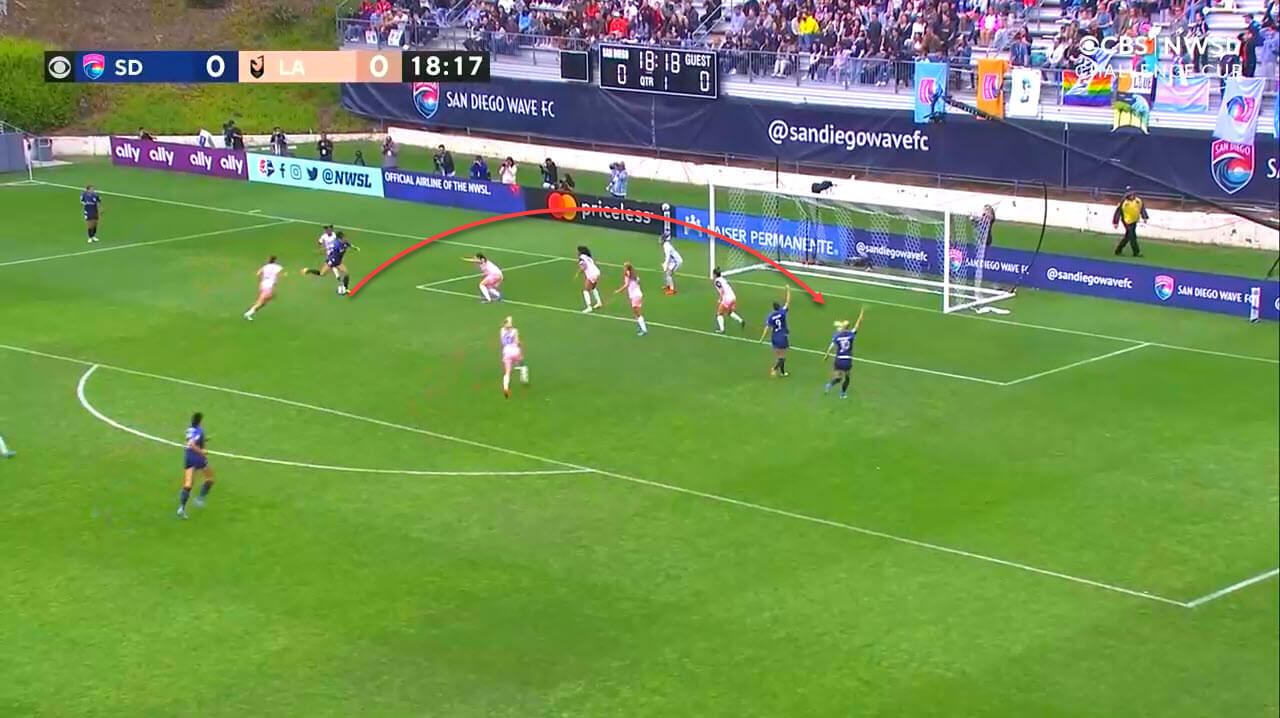 Following the goal, San Diego Wave didn’t retreat and played with the right mentality given that they continued their attacking attempts relying mainly on shots from distance by Kornieck and Jakobsson while trying to serve Taylor whenever possible with the help of both full-backs who advanced so often to support the attack by crossing and providing extra passing options on the wings. Nevertheless, San Diego Wave scored an own goal due to a very bad mistake from both McGrady and Sheridan when the first gave a backward pass to the latter but both players had a misunderstanding about the intended direction of the pass. Sheridan wanted a pass that follows her movement outside of goal while McGrady didn’t really notice Sheridan’s movement and gave her a slightly distant pass, which resulted in a goal for Angel City. Such errors need to be addressed immediately to not be repeated during the NWSL season because such chemistry mistakes can cause a lot of problems for the team going forward as it can also affect their level of confidence especially in tough matches. 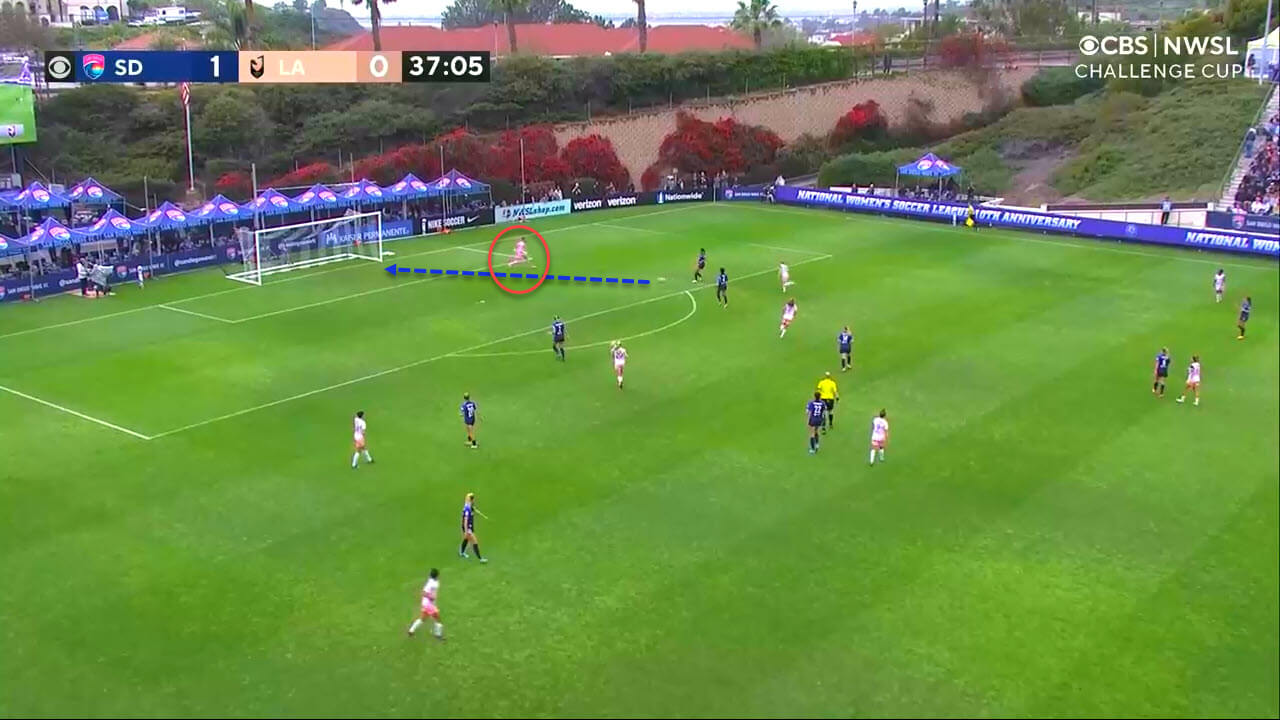 What counts for San Diego Wave though is that they didn’t give up after conceding this goal. They continued their attacking attempts and strived for the second goal more than their opponents. And at the last minute of the first half, Morgan used her finishing expertise to exploit a bad control from Angel City’s defender inside the penalty box and anticipate her second touch by going for a powerful shot and putting her body in the right direction to prevent her opponent from touching the ball before her. It was really an intelligent decision from Morgan given that the whole action seemed in control of the Angel City defender at first. Deciding to anticipate the second touch of the ball and calculating the distance between herself and the ball and accelerating to reach it before her opponent proves the importance of having an attacking player with finishing experience and solid striker decision-making. 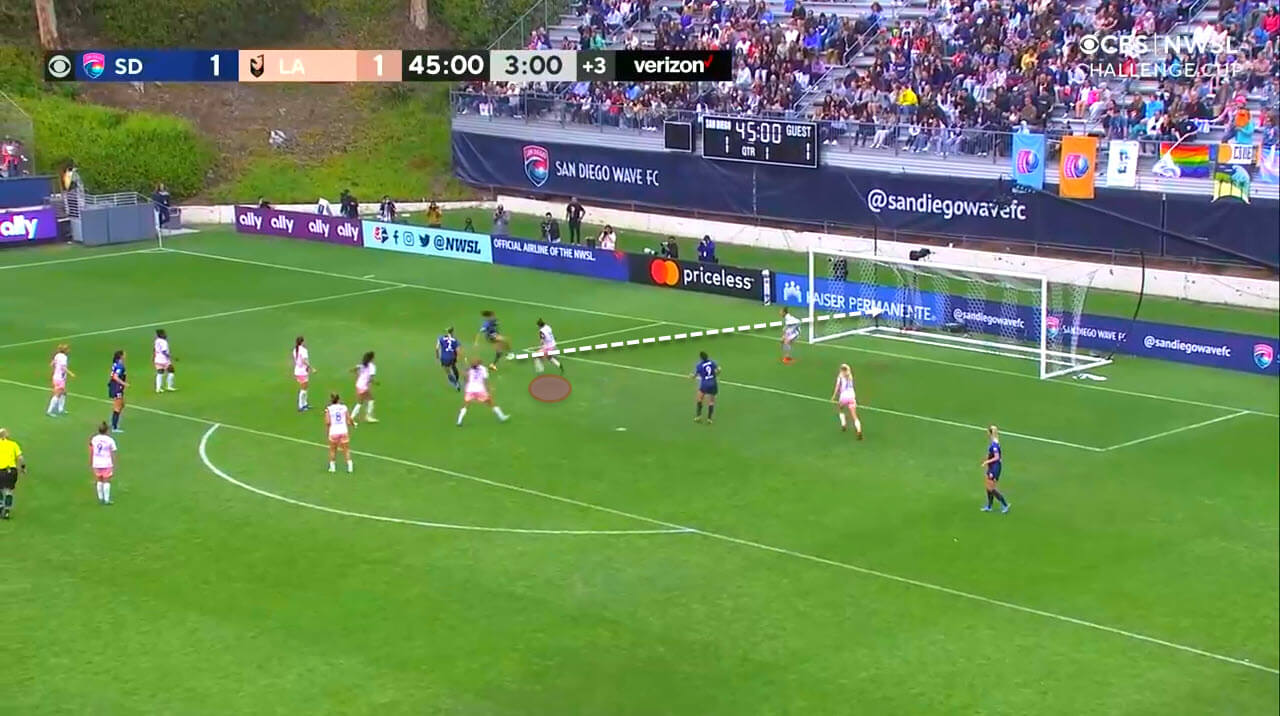 In the second half, San Diego Wave conceded a second Angel City goal but were able to bounce back once again and take the lead thanks to excellent work from the talented Kornieck who attracted two players to her before providing her teammate with a beautiful back-heel pass into space, creating a great attacking situation out of a complicated action. Such plays prove the quality of a player like Kornieck even though she used to play as a striker or as a winger previously at Orlando Pride. Yet, she is now proving that she can be a very useful midfielder as well. 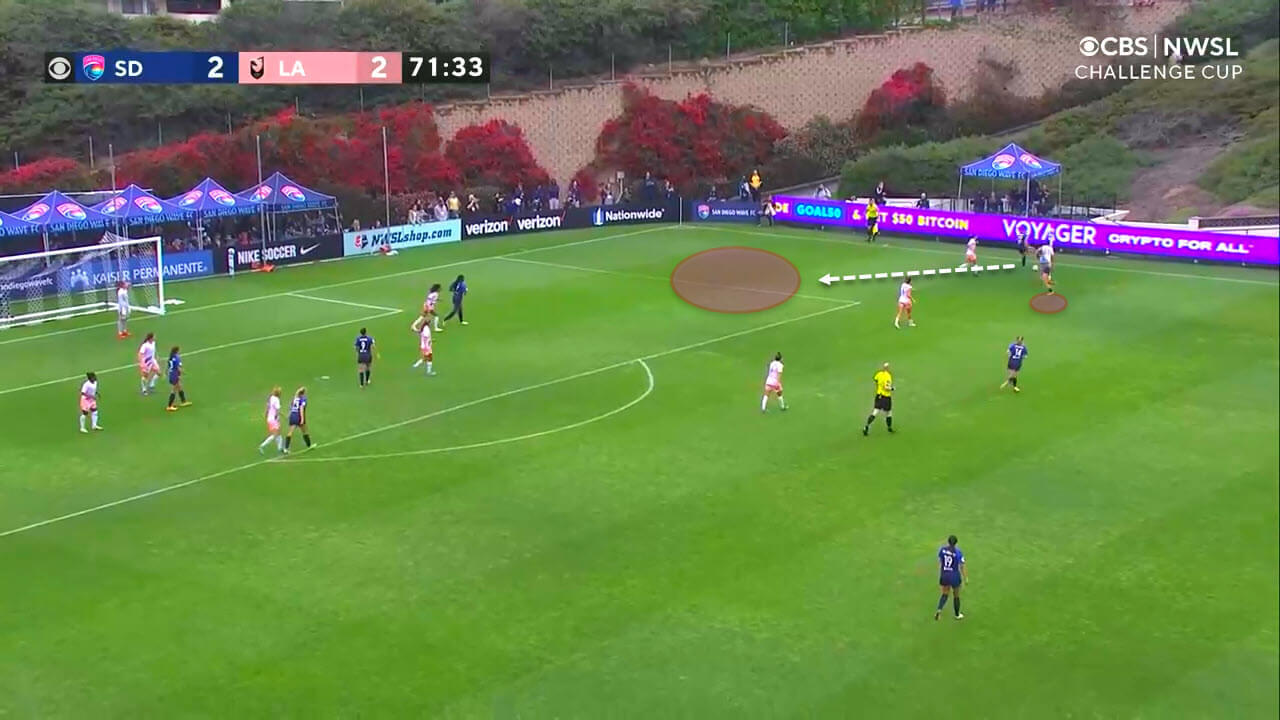 Following that back-heel pass, Westphal penetrated into that empty space and crossed the ball towards the box where Morgan was well-positioned and therefore she scored a powerful volley. It should be mentioned though that Taylor’s movement inside the box attracted two of Angel City defenders and made the mission easier for Morgan, leaving her unmarked during the cross since everyone thought that the ball would go to Taylor who was closer to the near post. 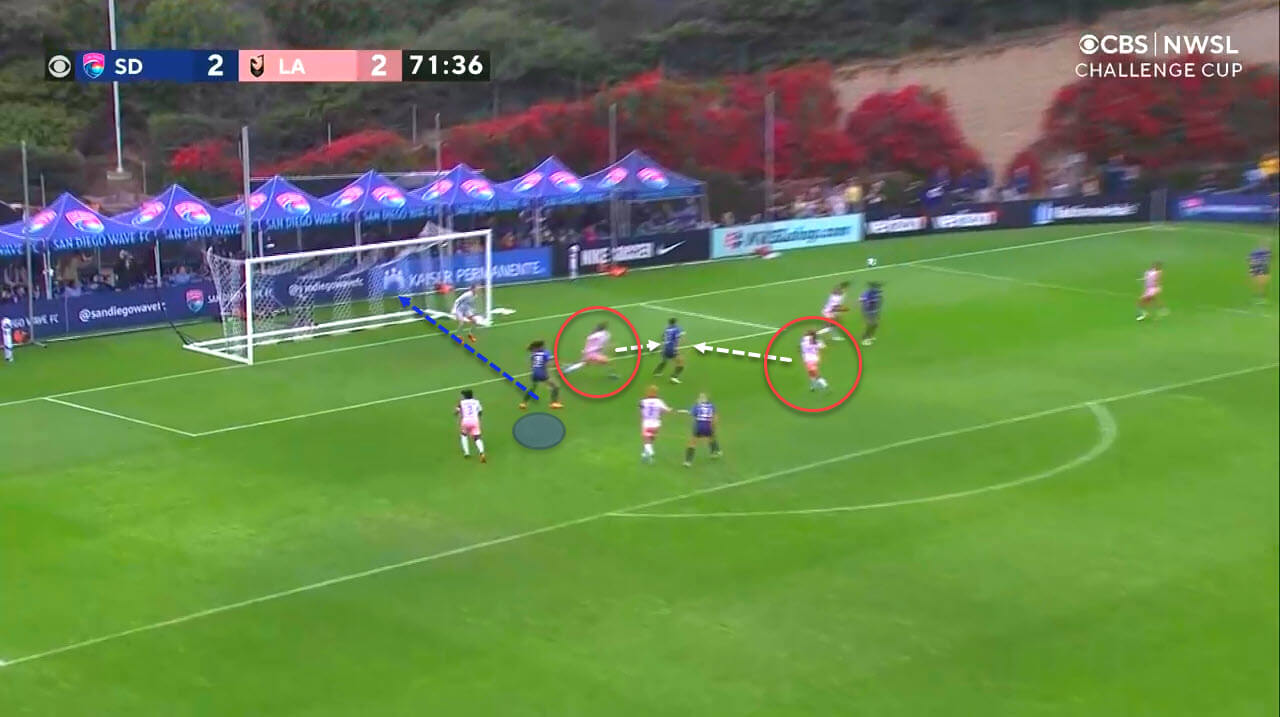 Angel City didn’t start the match very well since they conceded a lot of chances, especially during the first half. They were however given the chance to get back in the game after the own-goal but the players didn’t really show that they are determined to make a concrete reaction. The team conceded 11 shots on target and were not really dangerous up front as they were not able to reach the final third easily. Angel City had five shots on target during this match and these included their second goal which was a good one. After circulating the ball for a moment, Spencer tried to cut inside from the right wing and saw Press waiting inside the box and provided her with an accurate cross. The latter was able to put the ball down despite being marked by two players before hitting it with power, scoring an excellent half-volley to equalise at the 58th minute. 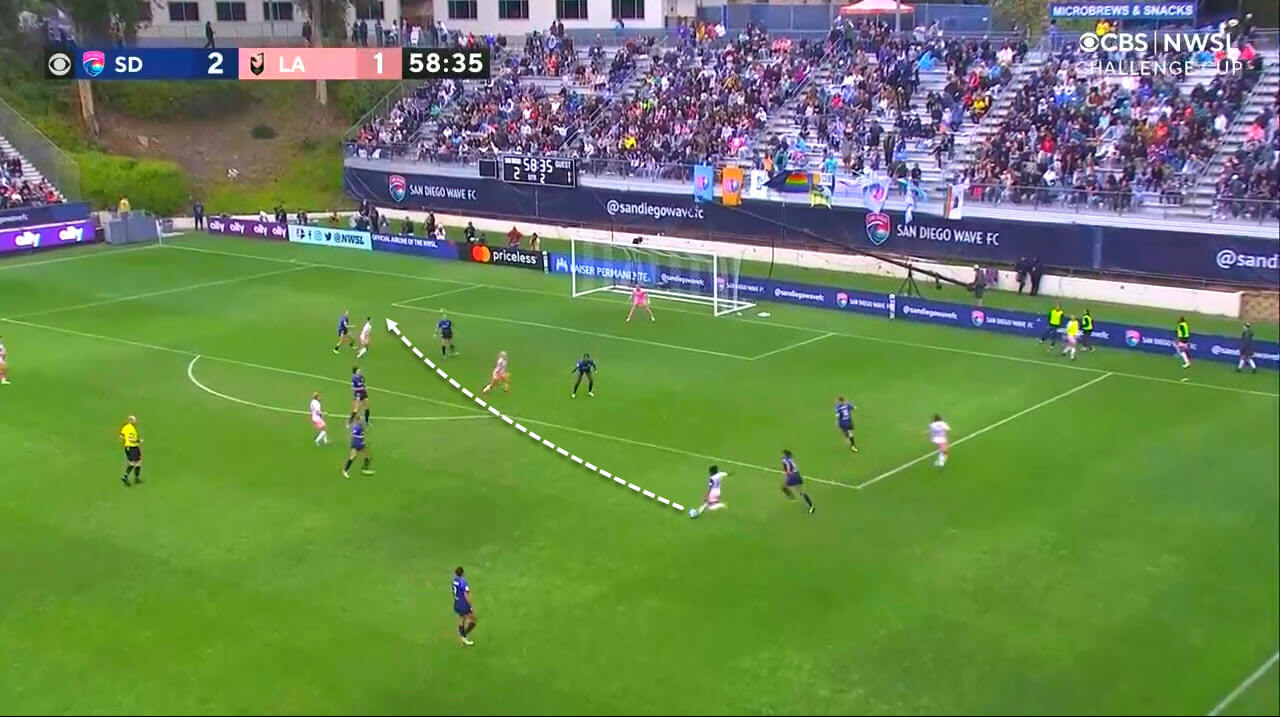 But despite scoring the equalising goal, Angel City attacking players’ decision-making was poor inside the final third. The team found some spaces at different moments of the match but they failed to make adequate passing or shooting decisions in most of these actions. Moreover, the attacking players of the team should be more decisive in front of goal and improve their finishing abilities in order to exploit such opportunities in the future and be able to turn the table on their opponents. As an example, McCaskill had plenty of time to make her decision in this action but in the end, she made the less suitable one by preferring to go centrally instead of serving Endo who was completely free on the right-wing. 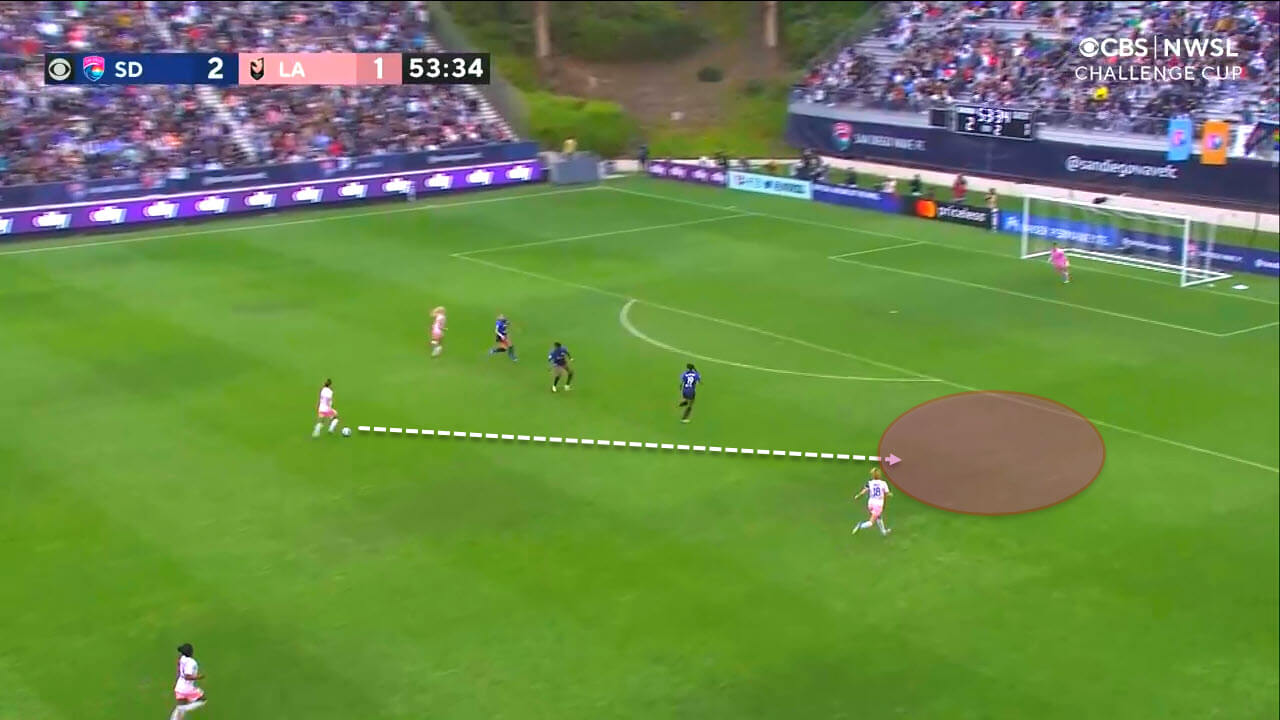 Furthermore, Angel City had a few goalscoring chances in this match and were not able to exploit these chances due to poor finishing despite reaching the box with some excellent passes. Here, McCaskill spotted Press’ movement at the back of the defensive line and gave her a very accurate long pass, however, Press failed to shoot on target despite being in front of goal. 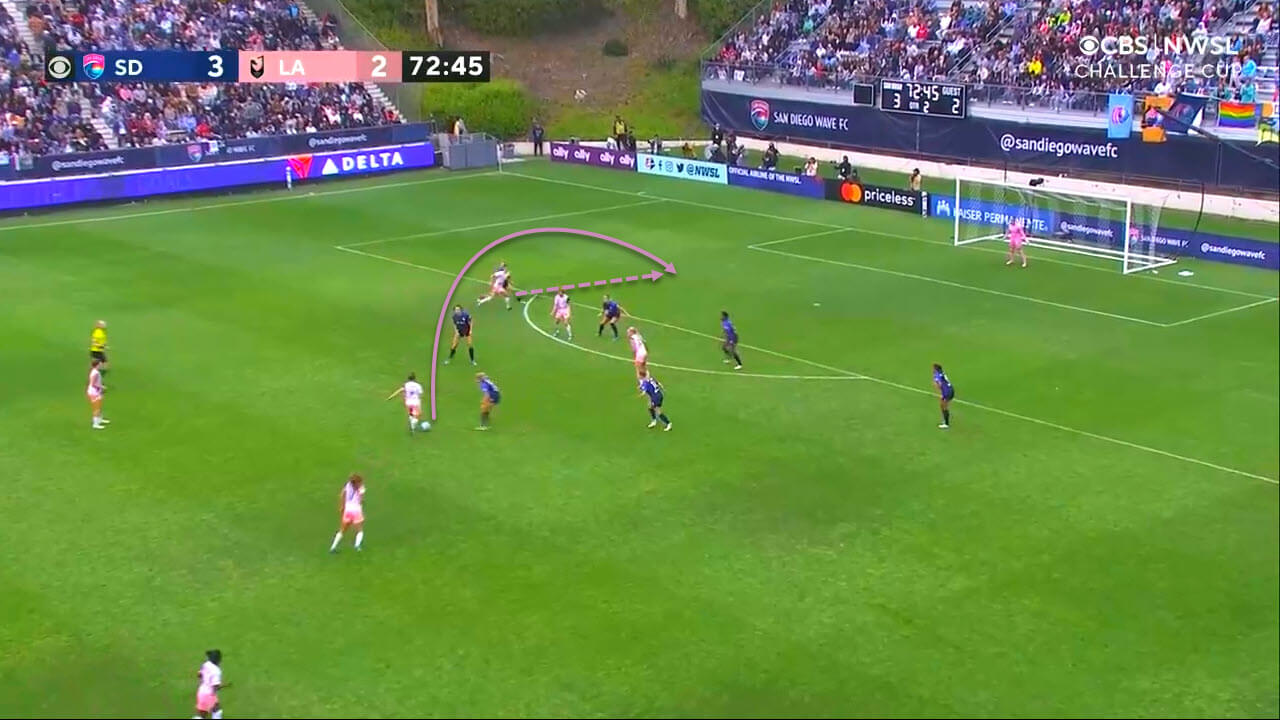 San Diego Wave consolidated their solid start of the NWSL Challenge Cup with a deserved win and they now look forward to their upcoming games in order to battle for the top 2 spots and prepare for the NWSL in the best of ways.

On the other hand, Angel City will need to keep on working to improve their mistakes and most of all, build chemistry between the players and be more decisive from an attacking perspective.