Arianna Caruso is one of Juventus and Italy’s best midfield talents who is getting closer to her peak in this period after starting her career at Roma and remaining there from 2014 to 2017 before taking a big step and moving to Juventus Women in 2017. Caruso missed the 2019 FIFA Women’s World Cup and was called up to join the Italian national team at the start of the UEFA Women’s Euro 2021 qualifying cycle.

Therefore, Caruso is yet to play in a big international competition and has competed only in Serie A Women and in UEFA Women’s Champions League. Her role in Juventus’ four Scudetto wins so far was very important, as she was usually a reliable option whenever she was used and contributed generously both in the attacking and the defensive phase.

In this tactical analysis article, the focus will be on Caruso’s tactical flexibility and her physical abilities, as well as identifying her responsibilities on the pitch within Juventus’ tactics. This will help in getting to know this Italian midfielder from a new perspective that looks exclusively at the player’s profile from a critical, tactical point of view.

Firstly, Caruso is a player who’s mastered playing football with both feet and she’s shown on several occasions how she can exploit this characteristic by crossing, passing and shooting accurately with either foot. This advantage can and is already helping Caruso a lot, especially in terms of playmaking and scoring goals, as it facilitates her mission whether she is on the left or the right flank.

Moreover, the start of the 2021-2022 season has been excellent for Caruso as she was able to attract the attention of women’s football viewers thanks to her regular and solid performances in Serie A and especially in UEFA Women’s Champions League.

The 21-year-old is mainly a central midfielder who plays as a defensive midfielder sometimes since she has the physical abilities required for such a role. At Juventus, she is usually asked to participate actively in the build-up and especially to serve the two wingers or the players who move inside the final third and near the box. Her responsibilities include following the action after providing the pass and giving some passing options by advancing towards the penalty box. In addition to that, some other specific tasks are required from her during set-pieces and especially when the team is out of possession to help in defending and pressing.

In addition to playing as a central and sometimes defensive midfielder, Caruso can also play as an advanced playmaker, as she is good at finishing and knows how to position herself well inside the box whenever she advances. As you can see in this heatmap, Caruso plays more in her opponents’ half than her team’s half, which proves that she is relied upon in attack more than when defending. 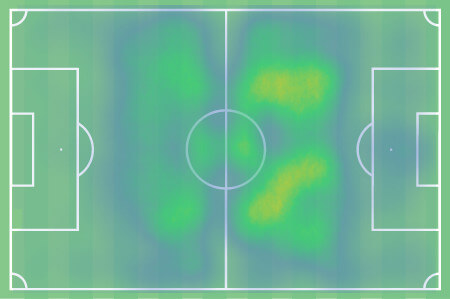 Caruso is becoming more useful to her team year after year in terms of playmaking and goalscoring as she was able to develop a lot in terms of numbers compared to last season. For instance, she scored seven goals and made two assists in 14 matches in 2021-2022, while last season, she scored nine and gave an assist in 31 matches.

Caruso’s impact in Juventus’ first few UWCL games this season was crucial as she proved her attacking abilities once more, only this time, by acting as a striker and moving off the ball inside the box. Juventus were able to open the score against Servette thanks to Caruso’s excellent positioning before she asked for the ball, received an excellent cross and finished the action with a beautiful volley that surprised the opposing goalkeeper. This just shows not only Caruso’s goalscoring skills but also her efficiency as a player who comes from the back to support the team’s forward players and create confusion. 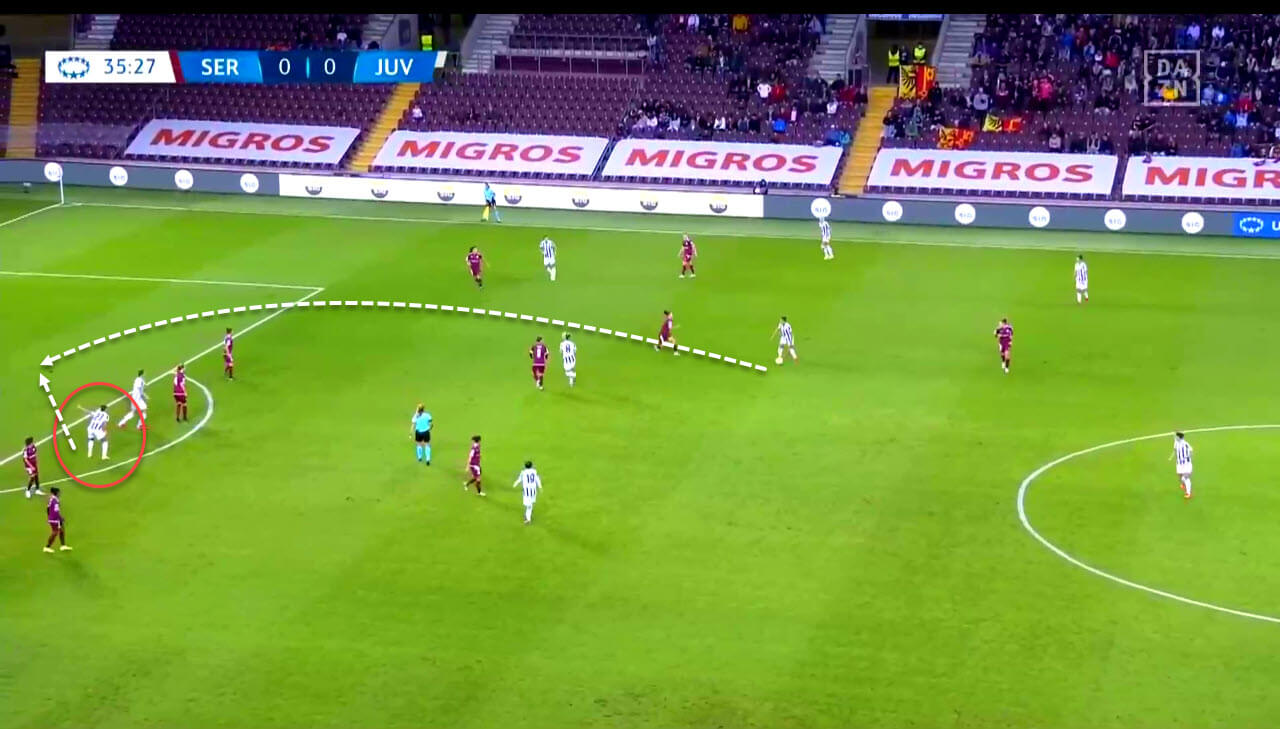 Whenever she finds herself on the left-wing, Caruso does not find issues with providing assists or crosses with her left foot as it’s natural for her to do it. This helps Caruso a lot, as it gives her the possibility of being dangerous from each spot of the final third. Here is an example from another UEFA Women’s Champions League match that shows how she was able to provide an assist to Cristiana Girelli as soon as she saw her positioned in a suitable place for shooting. 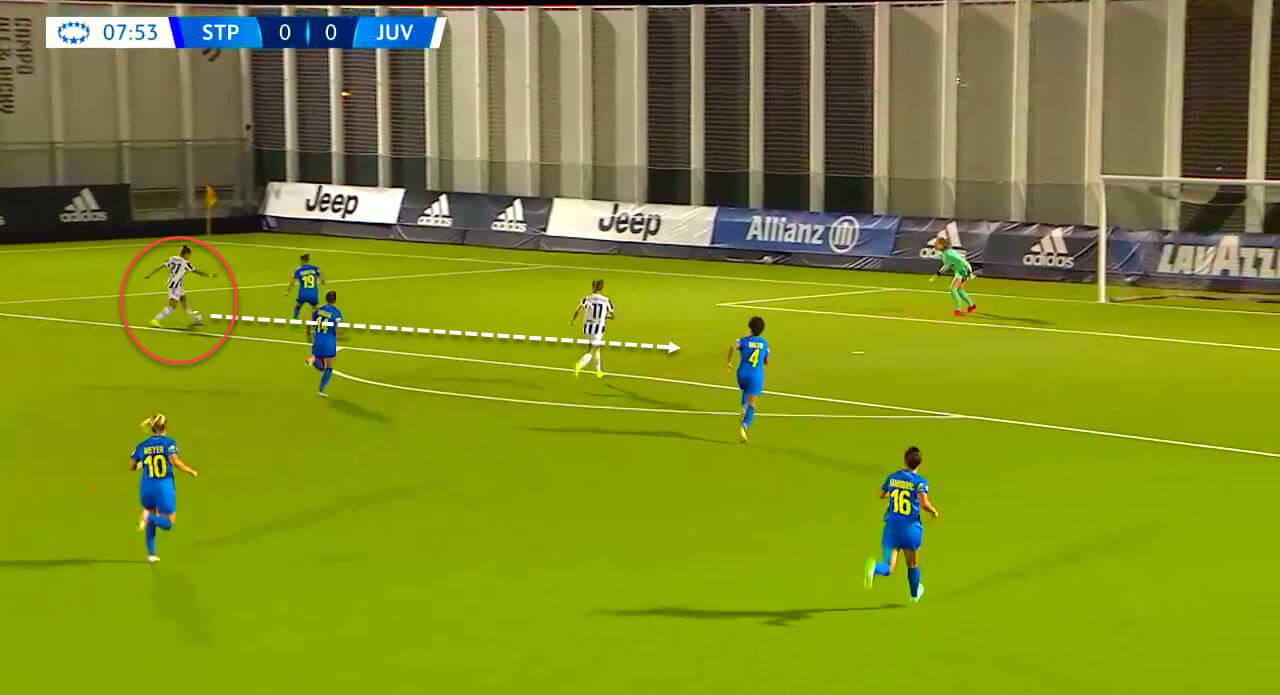 Another useful characteristic that highlights Caruso’s tactical maturity is her ability to identify the right timing for accelerations to not fall into the offside trap. She was able to escape from this defensive trap several times and put the opposing defenders in trouble by scoring unexpected goals such as the one shown below. Caruso made sure that she is on the same line with the defenders when the ball was about to be played and then she found herself unmarked and alone in front of the goalkeeper since the defenders were waiting for the referee to signal an offside foul. 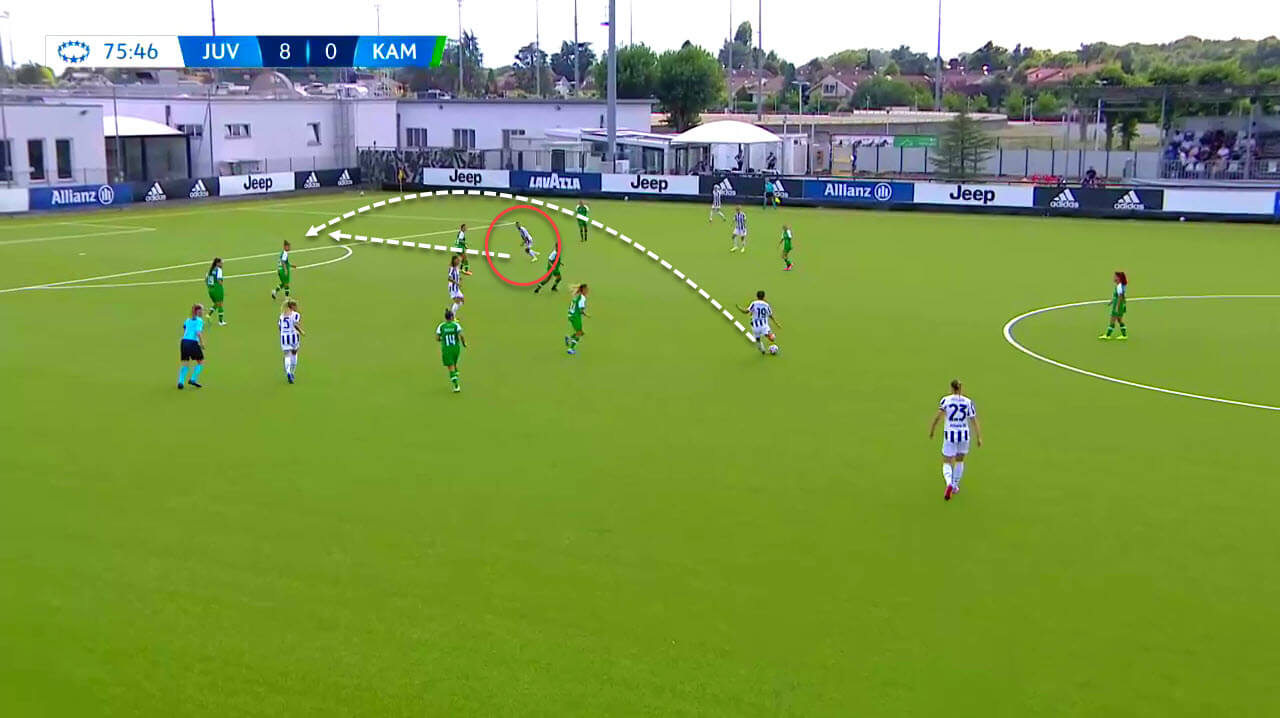 Caruso was able to score numerous goals according to this same pattern by positioning herself inside the box and choosing the right timing to ask for the ball and finish the action. Whether with Italy or Juventus, she was usually successful in executing such opportunities even though she shoots 2.09 times per match according to her latest statistics. Some of these shots are from long range and not just when she finds herself in front of goal. For instance, she was successful in scoring a beautiful goal from long range last season against Inter using her left foot to surprise both defenders and goalkeeper. 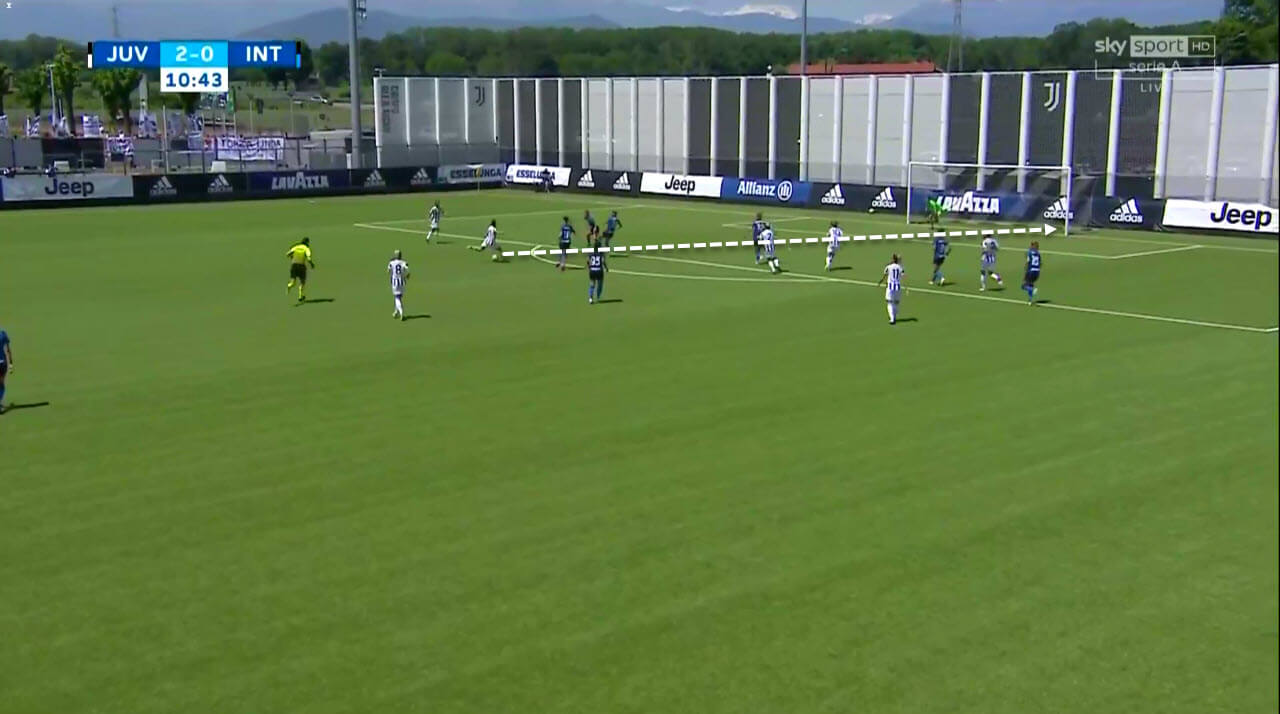 Apart from goalscoring, one of Caruso’s main responsibilities in midfield is to provide her attacking teammates with accurate and key through passes whenever possible. In terms of accuracy, she has 79.7% in terms of passing accuracy and 65.3% of accurate passes towards the final third. These numbers are reflected on the pitch if we consider her performances. Having the required vision that allows her to predict the movements of her teammates and the opponents guarantees an even greater passing accuracy and that’s what Caruso aims to achieve, even though she already has excellent accuracy rates.

She was able to create a goalscoring chance with a single through pass in the following chance, providing her teammate with a golden opportunity by excluding two defenders from the action. 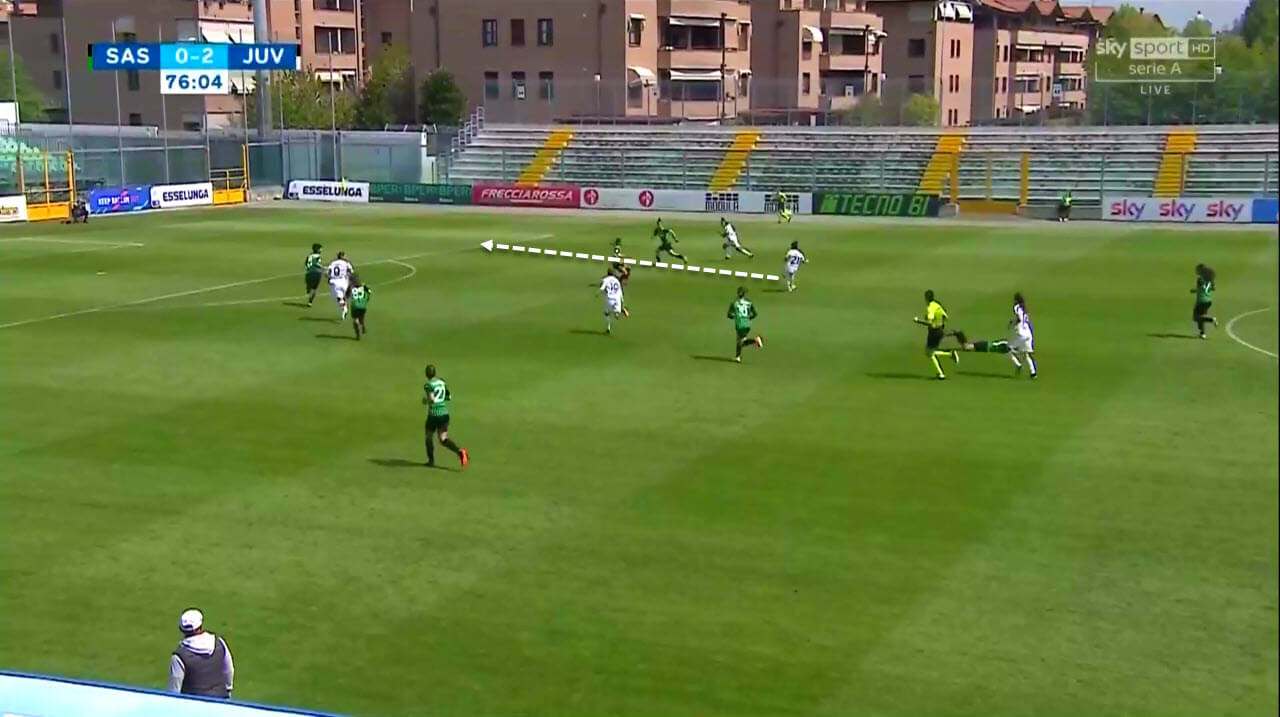 Also, Caruso’s playmaking skills can be noticed when the team is in the build-up phase. She is responsible for spotting the unmarked players, especially on the wings, and crossing the ball towards their direction quickly to exploit the free space in front of them. These types of long passes require a lot of precision and concentration but as you can see, Caruso usually executes these crosses successfully. 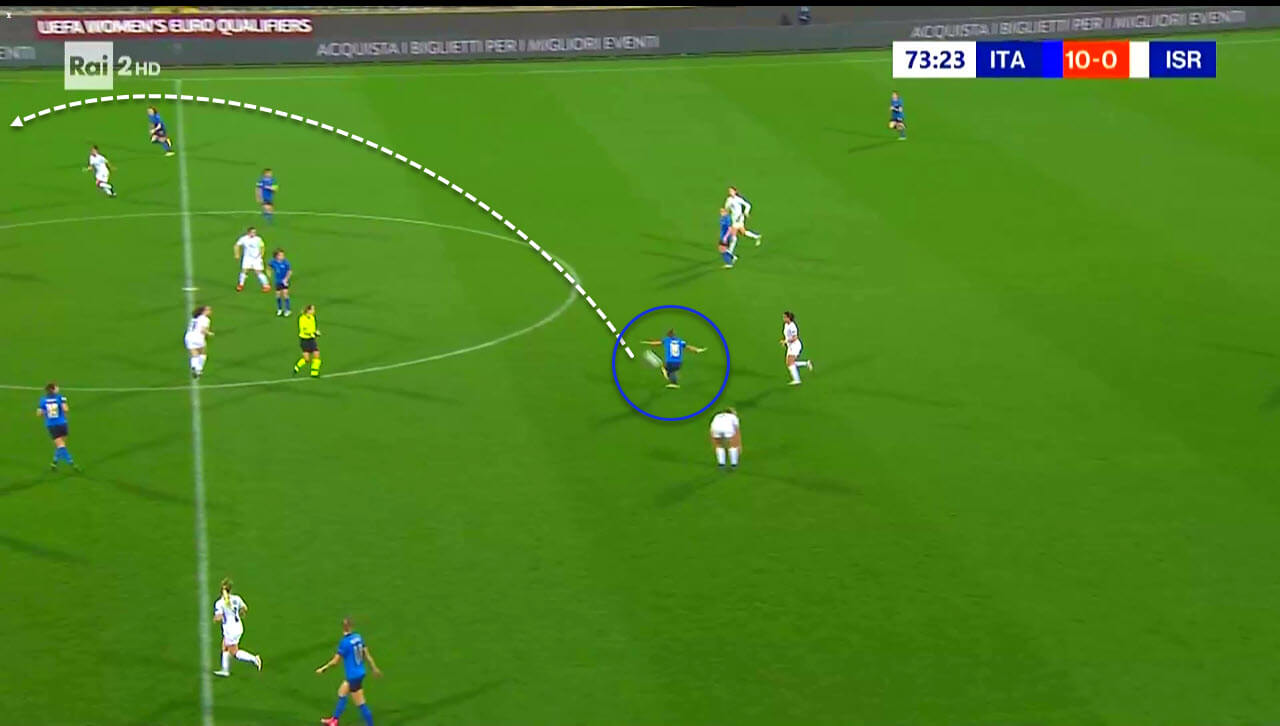 In terms of defensive abilities, Caruso has strong physical abilities that allow her to win defensive duels more often. She has 61.7% defensive duels won and makes 3.43 interceptions per match. Although she can work on increasing the number of interceptions per match, her defensive contribution, as well as her positioning when out of possession, are usually excellent. Moreover, she doesn’t give the ball away easily and relies on her strong body to win in duels, whether offensive or defensive ones.

In the following example, Caruso was able to intercept the ball from Roma’s player and started running despite being disturbed by the same player. Nevertheless, she kept on running with the ball and resisted her opponent’s pushing until she won a deserved foul. 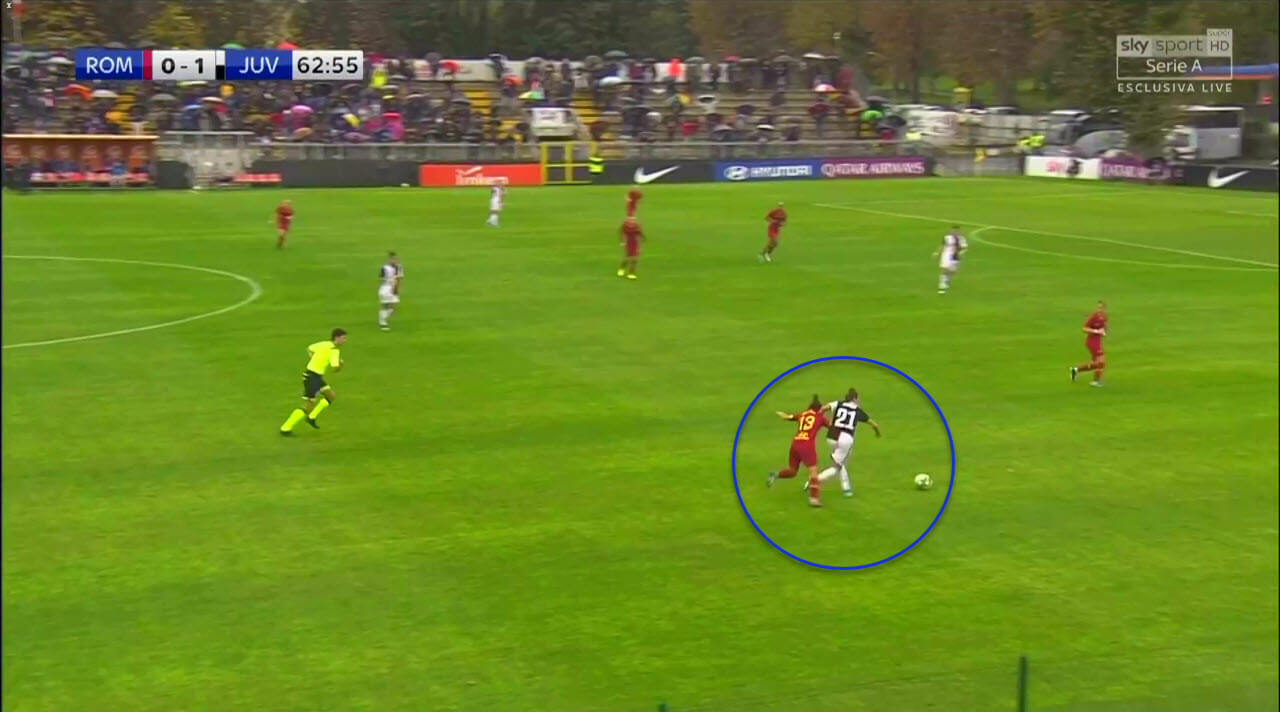 Caruso is also fundamental when the team is pressing high as she helps a lot in this phase by winning a lot of duels. Her tactical awareness allows her to spot possible passes and therefore anticipate them as she did in the following picture. 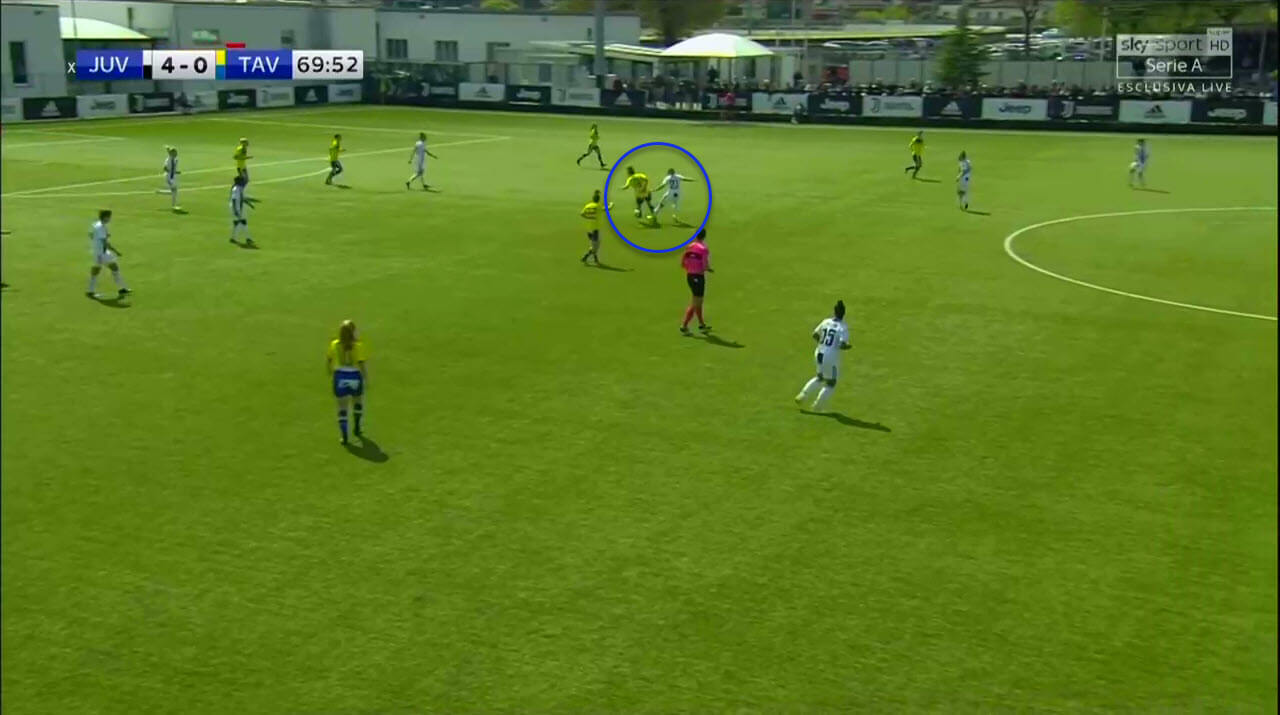 Such intelligent interceptions are useful to any team and any head coach since these actions can lead to instant counter-attacks if well exploited. What makes Caruso a key midfielder as well, is her ability to get out of difficult situations in her team’s half, especially when her team is being pressed. She often knows how to dribble past players to avoid losing the ball without exaggerating or making unnecessary dribbles.

In this example, we wanted to show how she got rid of the first marker while at the same time seeing the player with the red arrow coming towards her and doing her best to escape from her as well in a very short period of time. Being able to keep the ball at her feet in such dangerous positions is fundamental and allows the whole team to be more confident. 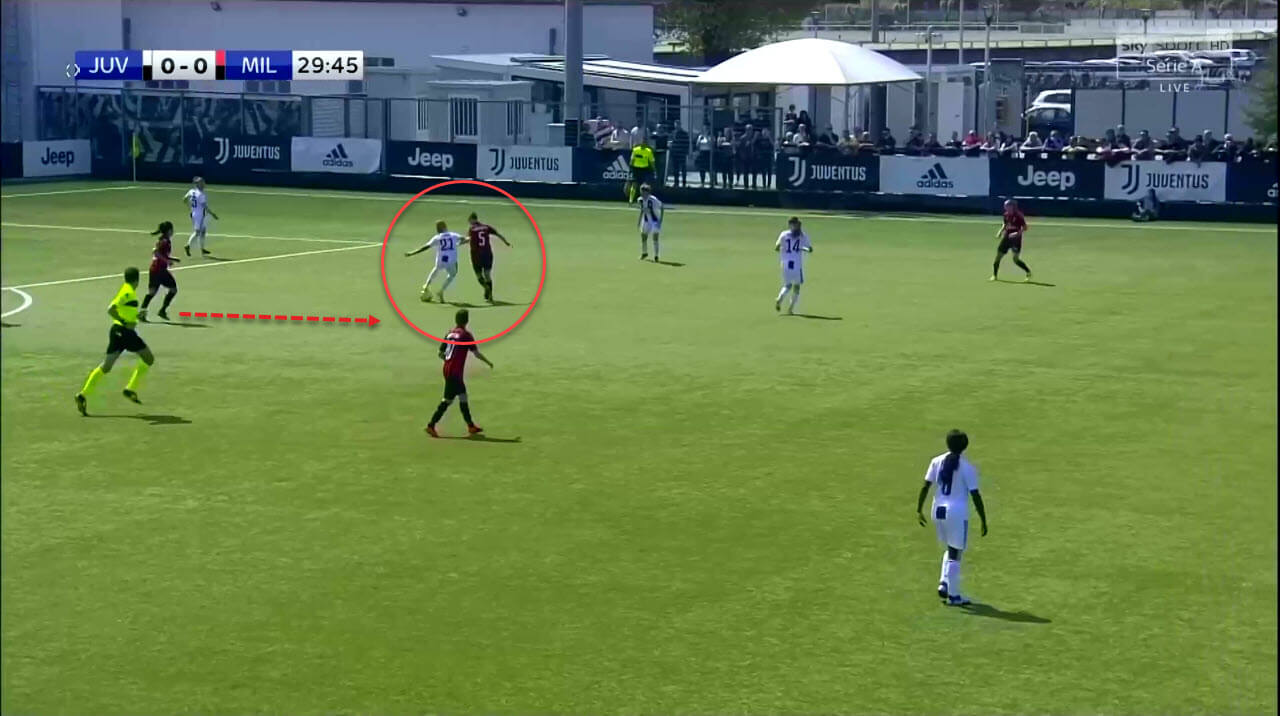 Arianna Caruso is a rising star in Serie A Women who can develop even further and become one of Italy’s best midfielders of all time if she keeps improving and maintains the same level of performances at Juventus and with the Azzurre as well, especially in the upcoming international competitions. Also, the goal for her and her team Juventus for the upcoming seasons is to maintain the domination of Serie A despite the big challenge from teams like Milan, Roma, Sassuolo, Fiorentina and Inter.