Racing Louisville hosted Orlando Pride for the 23rd fixture of NWSL and the locals were able to win 3-1 and improve their position in the standings even though they are still distant from the eighth position. Orlando Pride however did not exploit the opportunity of bridging the gap with Houston Dash and North Carolina Courage who are ahead of Orlando Pride in the standing and who both lost their games during this fixture. Nevertheless, Orlando Pride will need to bounce back as soon as possible if they’d like to guarantee a playoff position.

In this tactical analysis article, we will focus on Orlando Pride’s tactical issues that prevented them from winning while looking at Racing Louisville’s tactics and how they were able to dominate the game and be efficient from an attacking perspective.

Racing Louisville started the game using the 4-2-3-1 formation relying on Katie Lund as a goalkeeper, Julia Ashley, Nealy Martin, Kaleigh Riehl and Emily Fox in defence, Taylor Otto and Lauren Milliet as central midfielders with both Katie McClure and Yūki Nagasato as wingers and Cece Kizer as an advanced playmaker just behind the team’s striker, Ebony Salmon.

On the other side, Orlando Pride were lined-up according to the 3-4-1-2 formation with Erin McLeod in goal,         Ali Riley, former FAWSL and Manchester United’s Amy Turner and Ali Krieger as centre-backs, Marisa Viggiano and Gunnhildur Jónsdóttir as central midfielders, Sydney Leroux and Courtney Petersen as wingers with Marta playing as an advanced playmaker just behind the two strikers: former Arsenal’s Jodie Taylor and former Tottenham’s Alex Morgan. 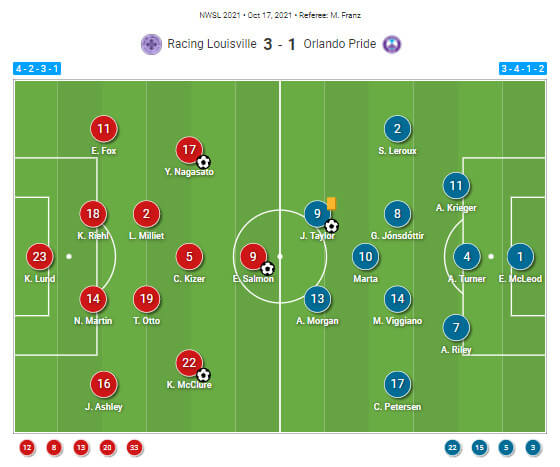 Orlando Pride started the match in the best possible ways by scoring a goal since the second minute thanks to a quick counter-attack concretised thanks to the efforts of the team’s attacking duo. It all started with Morgan who received the ball after a defensive clearance, ran with it and spotted Jodie Taylor’s acceleration between three defenders and chose the adequate timing to provide her with an accurate through pass, excluding all Racing Louisville’s defenders and putting Taylor in a perfect scoring position. Then, Taylor’s off the ball movement was excellent as she didn’t give up until she received the pass and ended the action perfectly with excellent finishing. 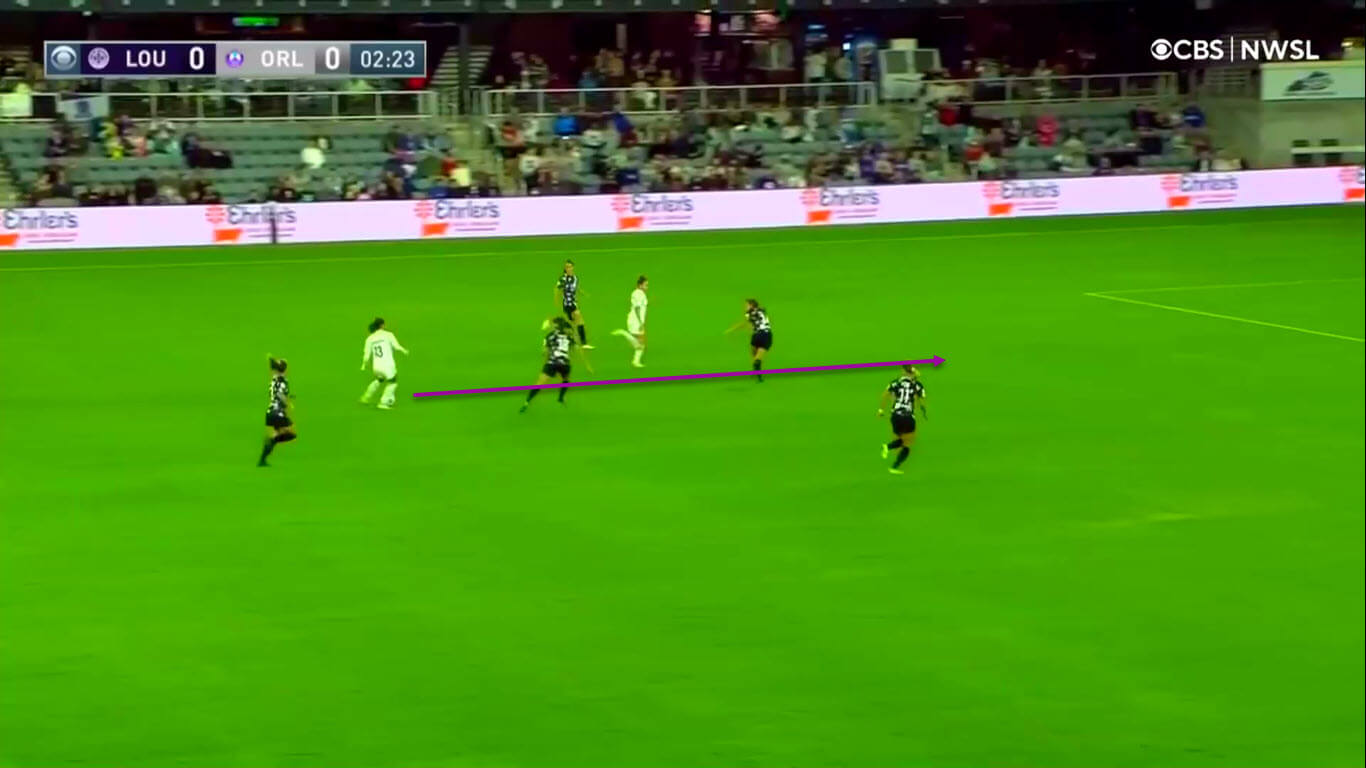 Although Orlando Pride’s attacks were not numerous following their first goal, the team was dangerous each team the attacking players reached Racing Louisville’s final third. However, their attacks lacked finishing precision and that’s what prevented them from getting a larger advantage despite having the opportunities to do so. For instance, in this action you can see how Morgan received a pass from Marta and decided to shoot from distance despite being marked by three opponents. And although her shot went a bit away from goal, it was powerful and well shot. It could have confused Lund if it was just a bit more precise.

Orlando Pride were not able to reach the penalty box easily since Racing Louisville organised their defence in a compact way for the rest of the match. And despite having some excellent attacking players, Orlando Pride were not successful in creating dangerous goalscoring chances. All that was tried is Peterson’s crosses or individual efforts from one of the attacking players, like you can see in this example where Leroux penetrated inside the box and was able to dribble past her marker, however her shot went away from goal. 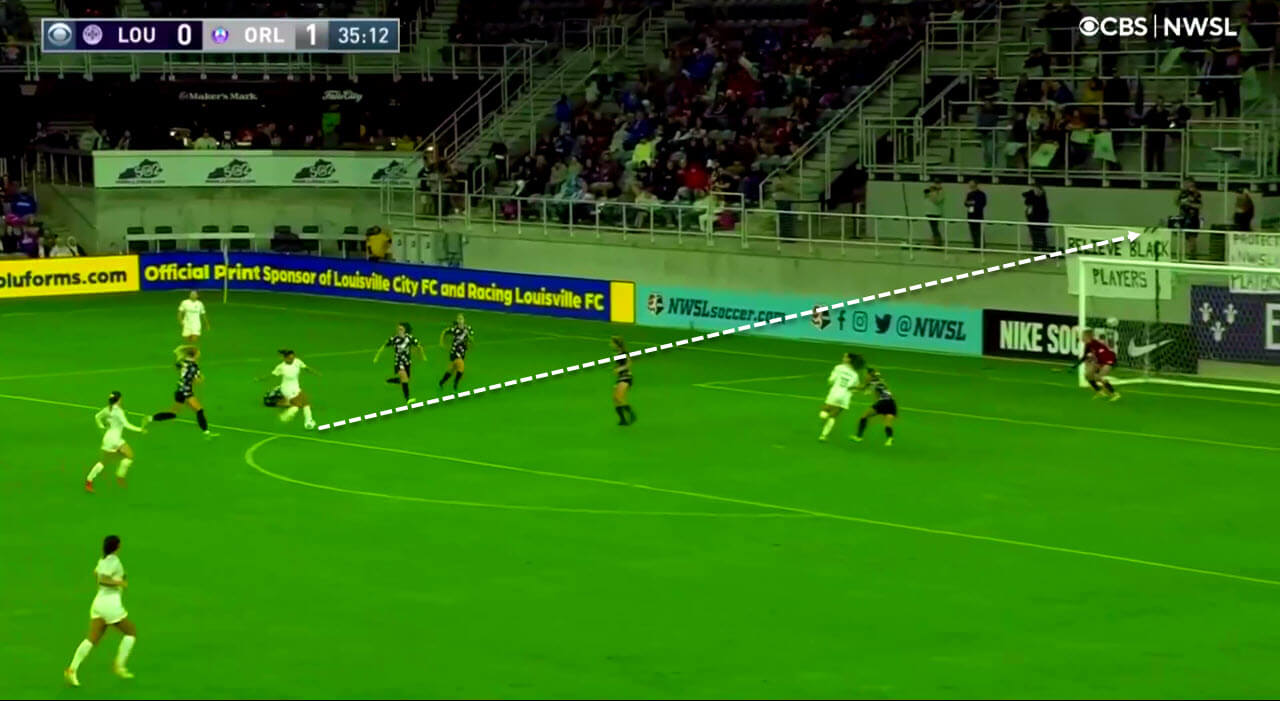 Orlando Pride’s defensive performance had two facets: the defence was excellent during the first half since the team did not allow any big opportunity for their opponents and made sure that McLeod don’t get tested, yet all this was useless because after conceding the first Racing Louisville goal at the last seconds of the first half, the match completely changed and Orlando Pride’s defensive compactness and confidence went away, allowing their opponent to add two other goals and win the match after they were behind in score.

Salmon was the source of this comeback since she was the player behind the first goal for her team with a well-curved and powerful shot that confused the goalkeeper and went inside the net. What helped Salmon even further in this action was Turner’s passive reaction when Salmon was thinking about shooting. She could have had anticipated the action and closed her down but she preferred to wait and the result was a conceded goal.

The distance left between Turner and Salmon gave the latte room for executing her shot accurately and exactly like she wanted, without much disturbance. 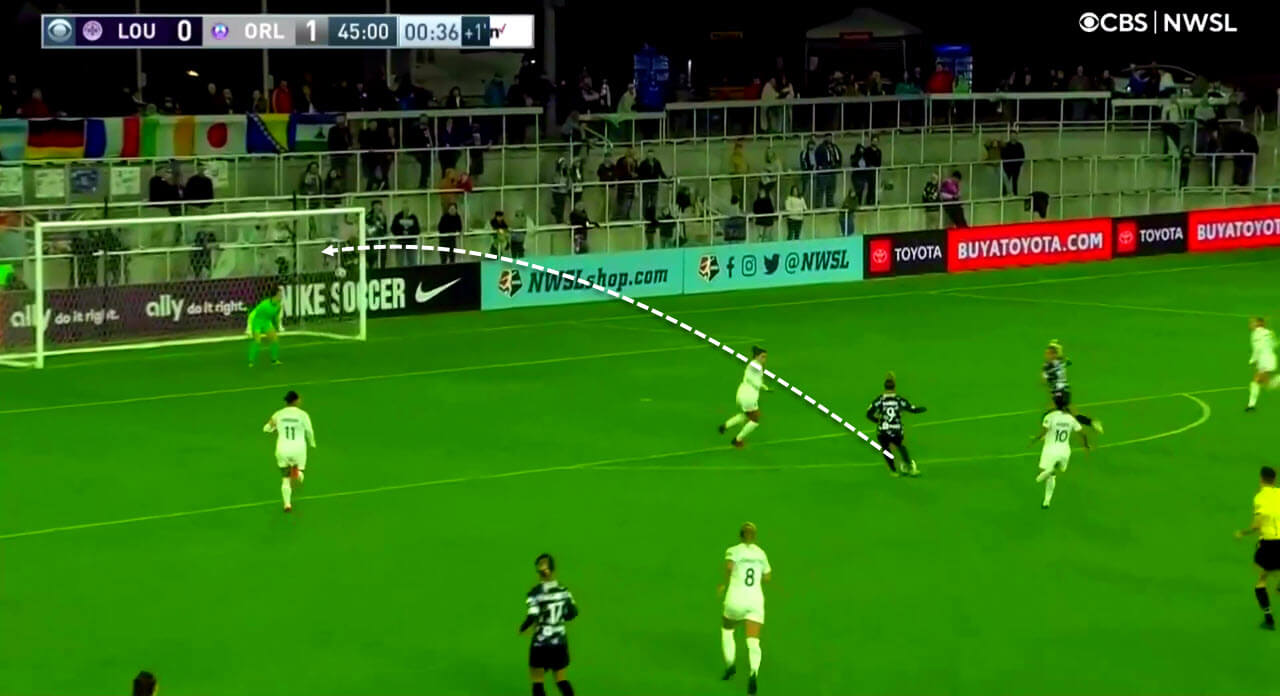 Then, the second goal came thanks to a beautiful and intelligent back-heel pass by Salmon that excluded the whole defensive line and gave the opportunity for McClure to be in front of the goalkeeper and have sufficient time for shooting, even though the angle wasn’t simple to score from. And once again, Orlando Pride’s defence could have done more here to prevent the shot with a sliding tackle. 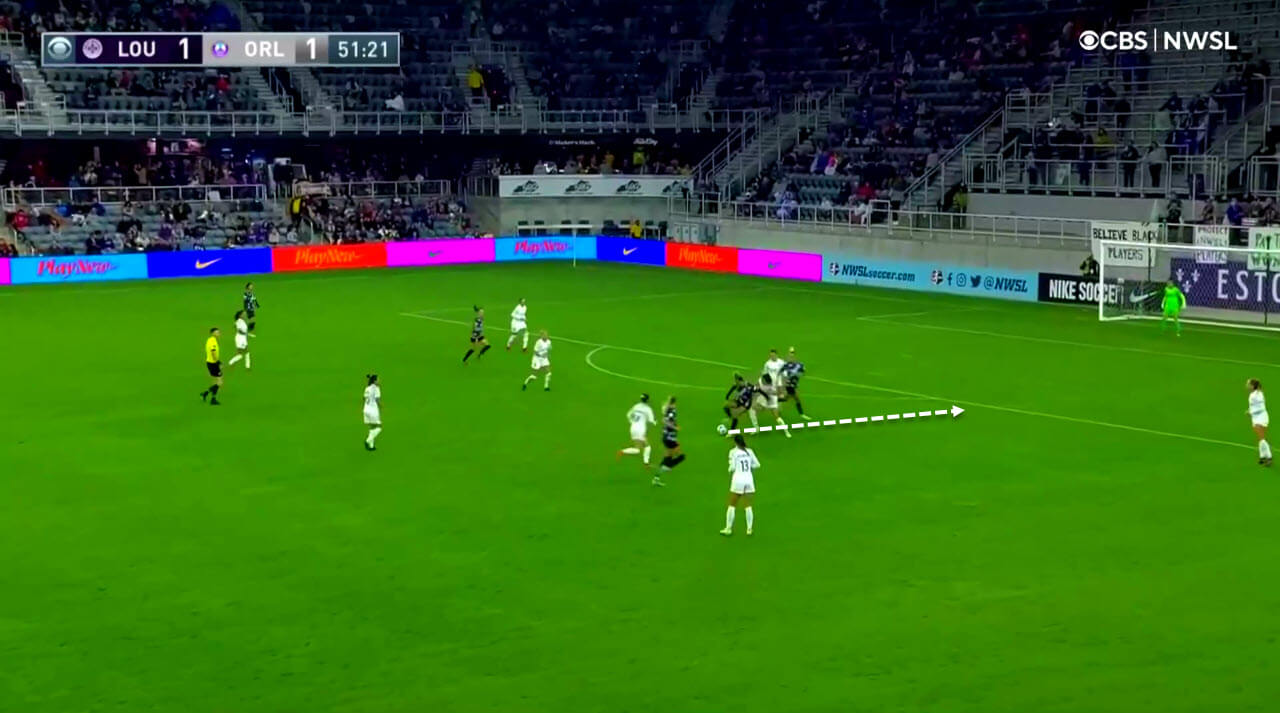 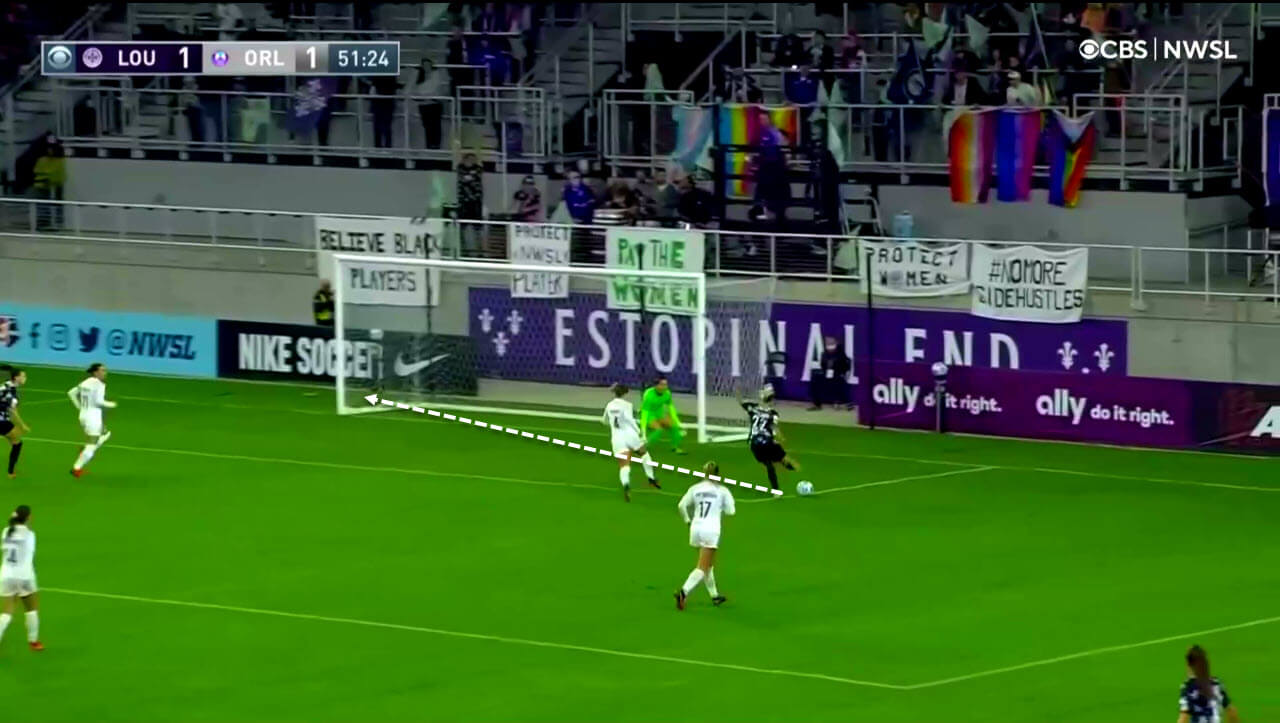 This second goal gave Racing Louisville players a much-needed confidence boost that allowed them to start circulating the ball without problems and alleviate Orlando Pride’s danger until they scored the third goal. But before that, Peterson and Morgan missed two big opportunities and the Kornieck—Morgan chemistry appeared once again in this match when Kornieck was subbed on and saw Morgan’s movement without the ball and gave her an accurate cross between the two centre-backs. However, Morgan’s finishing needed a bit more accuracy as she lacked concentration at the moment of shooting. Otherwise, the result of the match would have been different. 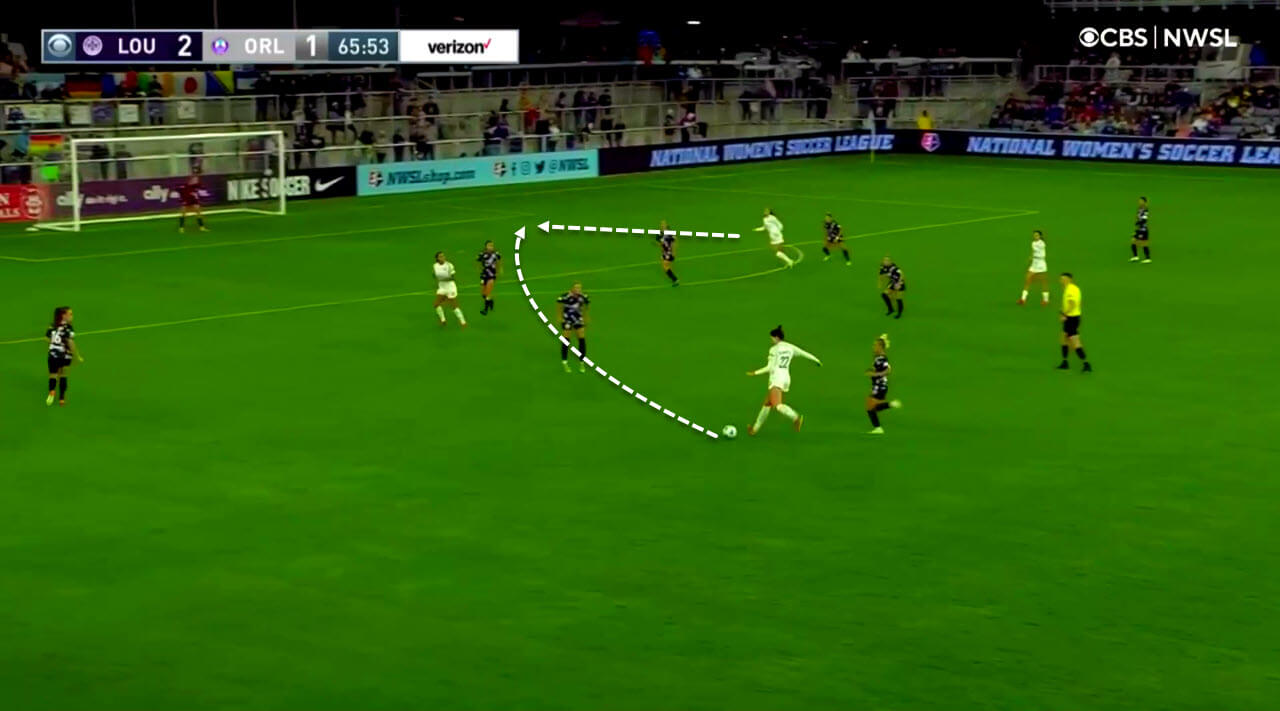 Racing Louisville however exploited this finishing issue and were able to add a third goal thanks to a well-played counter-attack led by Salmon who gave an excellent through pass to Nagasato, and the result was a goal that confirmed Racing Louisville’s win. And it was clear that Salmon’s contribution in this match was more than great since she has contributed massively in all of her team’s three goals. 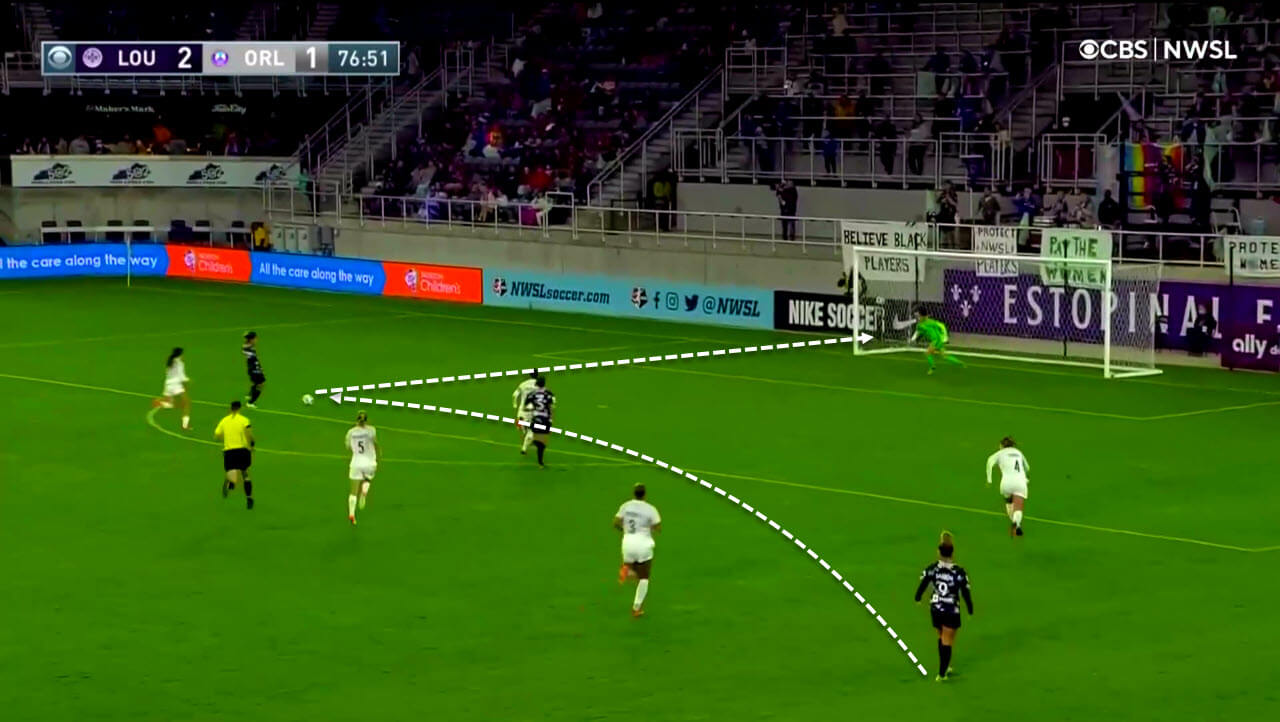 Orlando Pride has got all that is needed to win games yet they are lacking a bit more confidence and shooting accuracy in attack. They were dangerous throughout the first half of this match but they were only able to score a goal, and this led to having confidence issues and therefore doubting their ability to score a second goal despite having some of the best attacking players in terms of individual talents in the NWSL. Moreover, the team needs to be more solid in defence if they still plan on qualifying to the play-offs.

On the other hand, Racing Louisville proved in this match that they have a strong team personality and determination as they were able to get out of a difficult situation thanks to correcting their defensive mistakes after Orlando’s goal and doing their best from an attacking perspective. And in this regard, Salmon made the difference for her team.