Bundesliga 2021/22: How Hoffenheim’s pragmatism lead to a 5-0 victory vs FC Koln – tactical analysis

Coming into the 2021/22 Bundesliga season, both sets of fans for Hoffenheim and FC Koln were hoping for better a showing as both teams flattered to deceive. Last season, Hoffenheim finished 12th, which is far from their desired destination of European football, while Koln finished in 16th and remained in the league through a relegation playoff. With more quality littered around the squad, most would think Hoffenheim have the minerals to escape mid-table mediocrity and start a resurgence with brand new manager Sebastian Hoeneß.

The same sentiment can be echoed for Koln as they also have a brand-new coach with Steffen Baumgart leading the pack. So far, Hoffenheim’s luck has not changed as they currently sat in 9th place coming into this match. By contrast, Koln has been fit and firing coming into the new season as they were positioned 7th in the table, with their only loss coming to Bayern Munich.

This tactical analysis looks into the in-game changes that Hoffenheim manager Sebastian Hoeneß utilised to nullify the opposition while exploring Koln’s impressive intensity they showcased during the first half and how their great start fell away in the second. Lastly, I will be looking into Hoffenheim’s pressing traps that were used to minimise the threat of key Koln players, which lead to an inevitable goal-fest.

A 3-4-1-2 was Hoffenheim’s formation of choice for the majority of the game with club captain Oliver Baumann in goal, Kevin Akpoguma and Stefan Posch positioned at centre-back as well as David Raum and Pavel Kadeřábek at full-back. In midfield, Florian Grillitsch, Diadie Samassekou, Dennis Geiger and Christoph Baumgartner with Ihlas Bebou and ex-Premier league attacker Andrej Kramarić up-front.

For the away side, FC Koln made use of a 4-1-3-2 formation with Timo Horn in goal. In the back 4, Benno Schmitz, Jorge Meré, Rafael Czichos and Kingsley Ehizibue. Within FC Koln’s midfield was Salih Özcan as a lone defensive midfielder and to accompany him, Florian Kainz, Mark Uth and Jan Thielmann in more advanced positions. In attack was a striker partnership of Sebastian Andersson and former Ligue 1 striker Anthony Modeste. 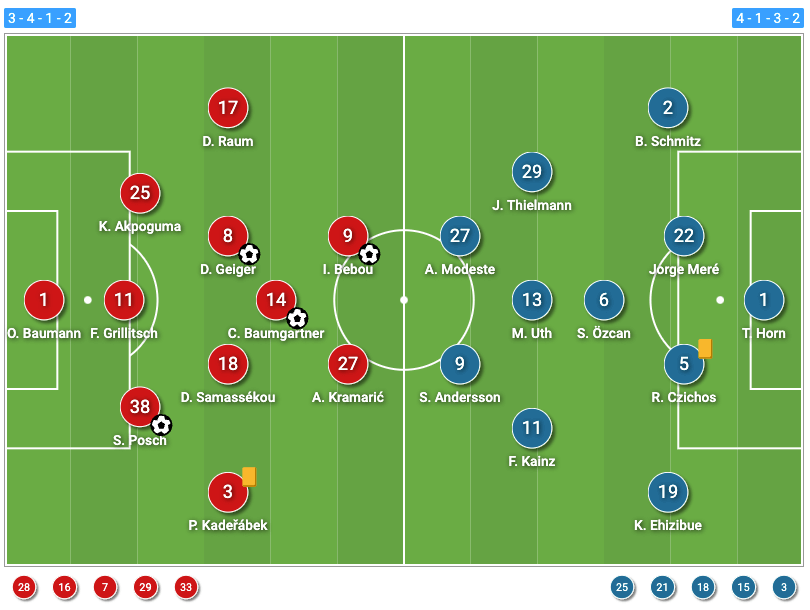 During the opening stages of this game, Hoffenheim originally employed a 4-2-2-2 formation in possession and a 4-4-2 diamond out of possession with Christoph Baumgartner playing as a number 10, man-marking Koln’s Salih Özcan in midfield. Within this tactical blueprint, Hoffenheim were not able to maintain control and sustain possession due to the frantic nature of the opening exchanges between both teams. Another issue that remained was dealing with the oppositions positional play when they were in possession.

FC Koln did well to progress the ball using the wide areas of the field. Koln was able to do this due to Hoffenheim’s man-marking scheme, with Hoffenheim’s goal, to deny Koln’s vertical passing game and this was done by matching their four midfielders with their opponents.

This type of defending had a knock-on effect as now both Koln’s fullbacks were granted space to receive and progress play due to Hoffenheim’s midfielders being occupied. During these types of situations, both Hoffenheim full-backs Kevin Akpoguma and Pavel Kadeřábek would have to press Koln’s fullbacks; the problem this created is the space left in behind that Koln did well to take advantage of. 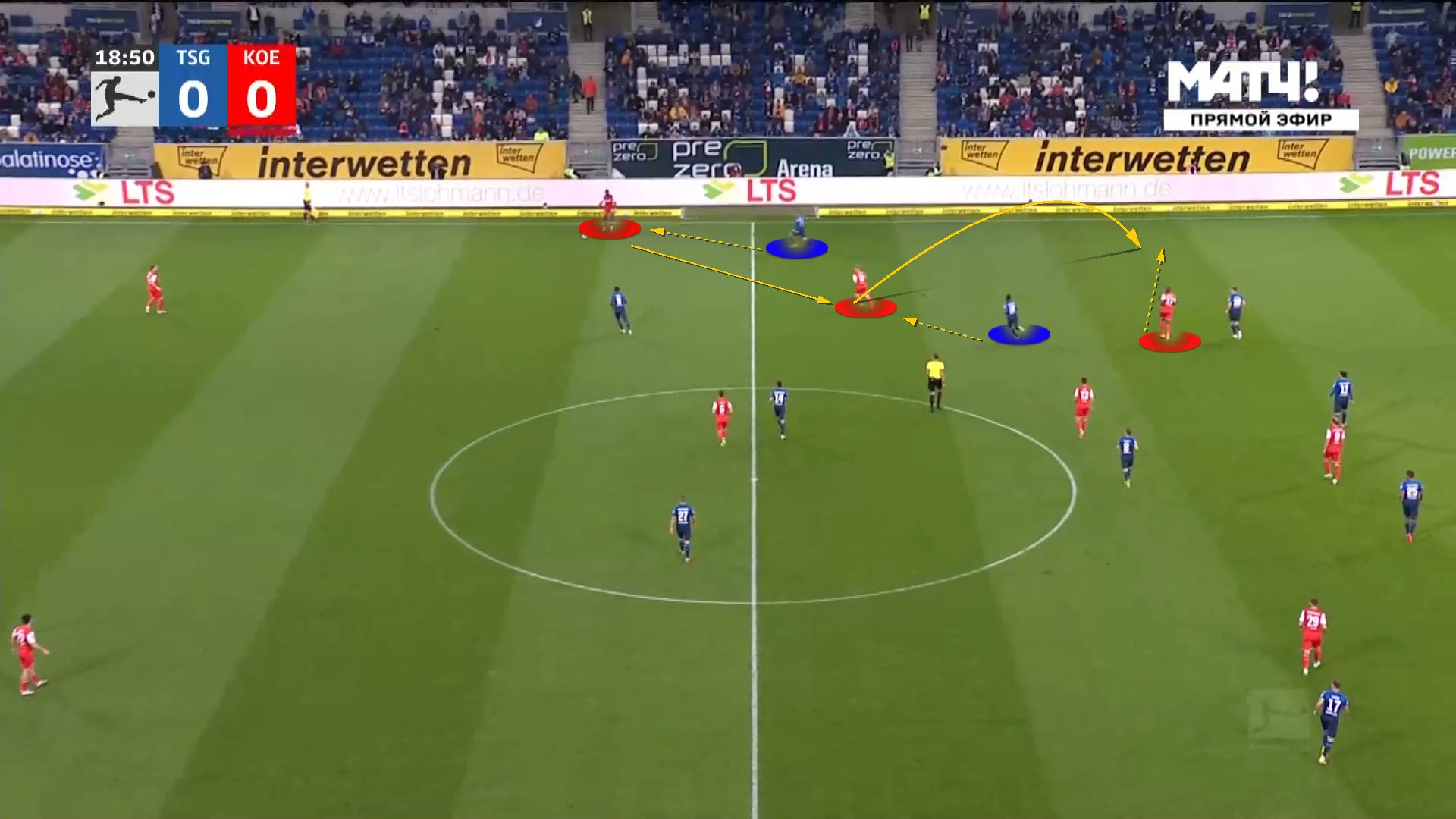 To combat Koln’s ability to stretch the opposition and move the ball forward down wide channels, Hoffenheim decided to switch to a 3-4-1-2 formation in-game with Florian Grillitch vacating midfield and operating as a central centre-back in a back three. This tactical tweak changed the course of the game for multiple reasons. Hoffenheim’s newly formed 3-4-1-2 granted more width out of possession, with the three centre-backs spreading out, Kevin Akpoguma and Pavel Kadeřábek now having the freedom to press Koln’s fullback when they had possession of the ball. Furthermore, the 3-4-1-2 was not only beneficial out of possession, as in possession, but Hoffenheim was also able to dominate against FC Koln.

Hoffenheim were able to play through the thirds more effectively due to their new build-up structure as they utilised a 3-2 shape within the first phase. Additionally, Hoffenheim’s double-pivot would stack, with one dropping deep to receive and the other stepping back and dragging away a marker to relieve pressure. This midfield rotation was also useful as it created progressive passing options. 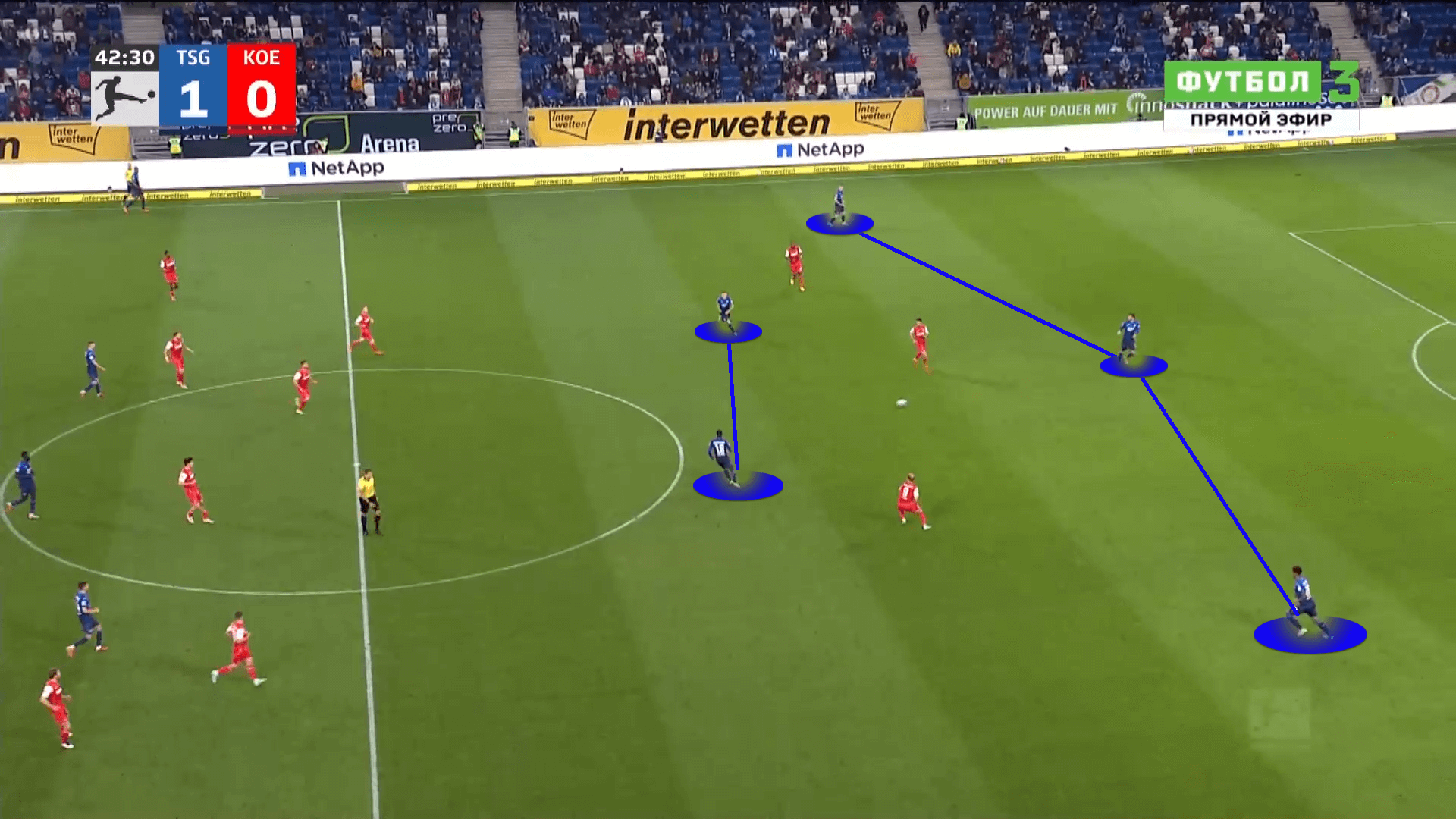 Here is an example of Hoffenhiems midfield rotations to ease build-up with the first phase of play. The back three is commonplace in Hoffenheim’s 3-2 structure, the difference now being, Diadie Samassekou is pulling away from play and in doing using his gravity to drag away a marker from play. Dennis Geiger is now dropping in and creating a 4v3 situation against Koln’s press. 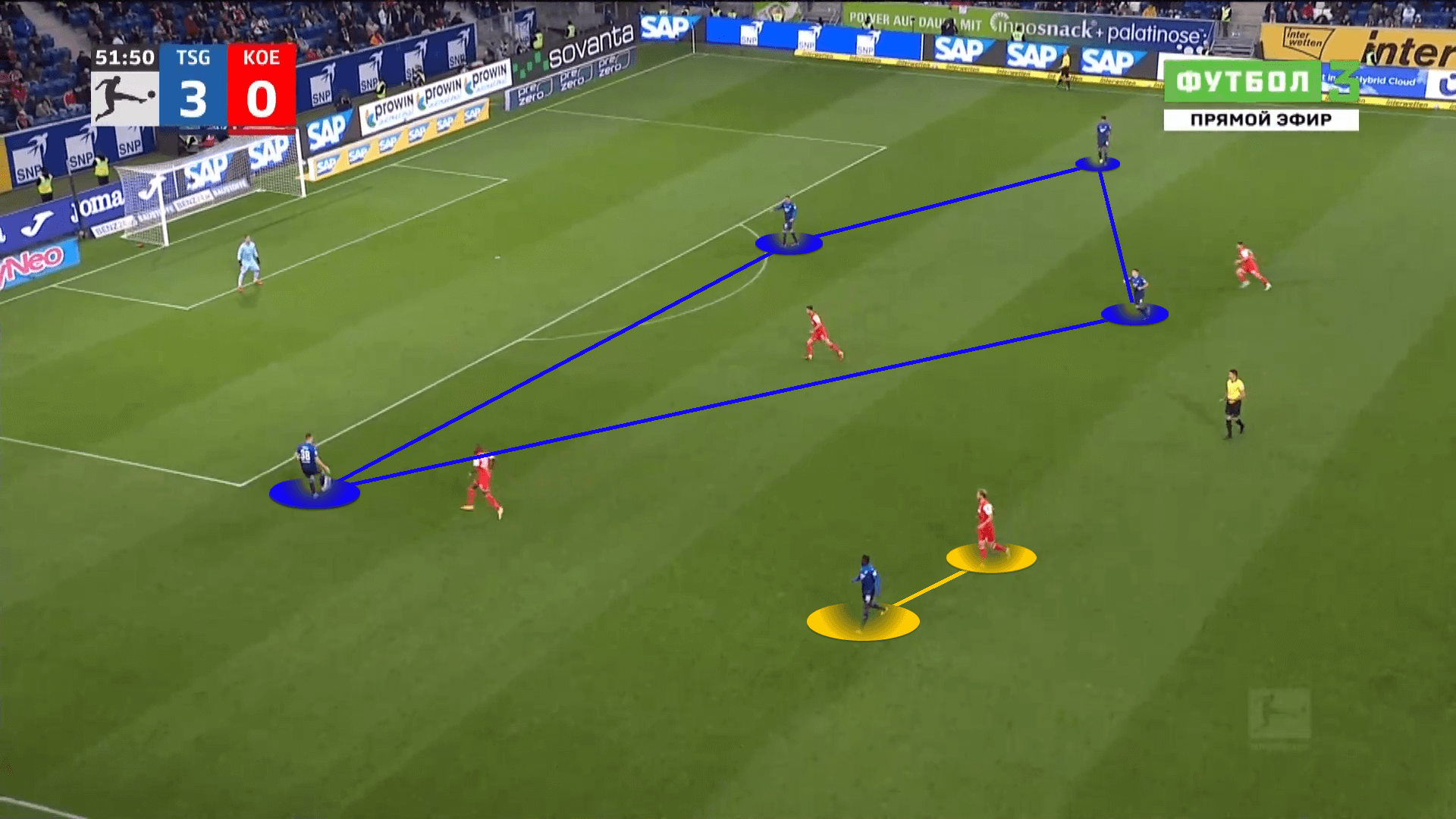 For Koln, Florian Kainz and Jan Thielmann caused Hoffenheim problems frequently due to their positioning. Both were stationed as free eights on either side of Mark Uth with their responsibility to drop deep to facilitate play, create passing connections with teammates and exploit space created by others. Hoffenheim recognised their importance to the functionality of Koln’s team and made alterations coming into the second half. Within their 3-4-1-2 formation, Hoffenheim ‘boxed’ in Florian Kainz and Jan Thielmann, forcing Koln to progress the ball using other avenues.

As demonstrated, Hoffenheim did well to control valuable space while being able to maintain their press. Georginio Rutter who came on as a substitute in the second half is seen pressing the player on the ball for FC Koln. While Rutter is pressing, the shape is still sustained and the FC Koln player highlighted is isolated. 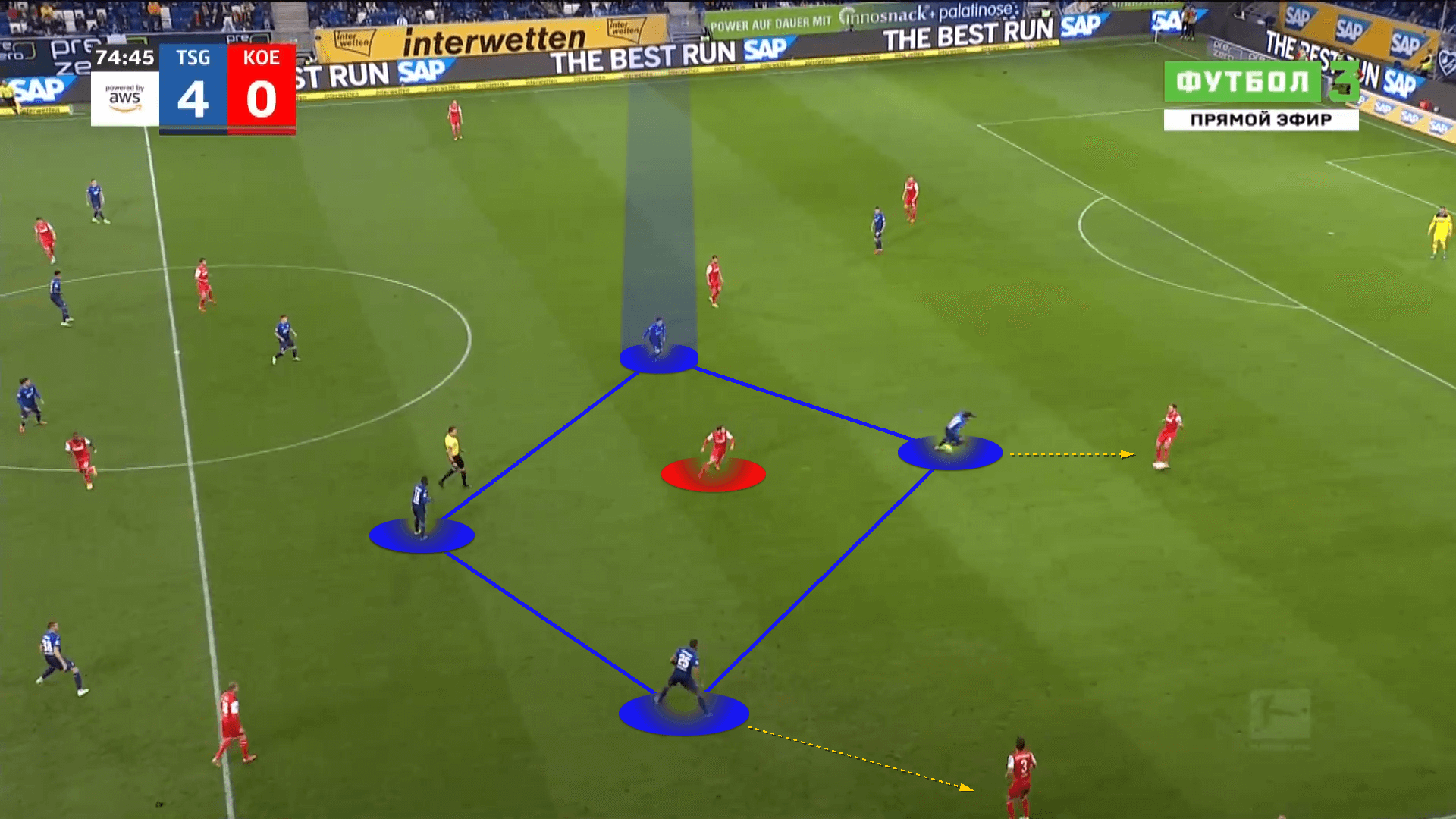 A tale of two halves for FC Koln

When observing previous results, FC Koln came into this game with a great deal of confidence and throughout the first half, it certainly showed. Koln’s positional play and creating space in behind Hoffenheim’s defence was on full display. Another aspect of their game that was most impressive was how Koln pressurised Hoffenheim when they were on the ball. Koln was able to create this pressure in a multitude of ways, for example when a loss of possession occurred, their intensity and tenacity to retrieve the ball back were immense.

Also, Koln on numerous occasions was able to condense spaces within the middle third of the pitch and were able to keep Hoffenheim camped within their side of the field and stop them from advancing by deploying such a high defensive line. Also, Koln’s use of the distance between their midfield line and attacking line was most effective as opposition midfielders Diadie Samassekou and Dennis Geiger were not viable as passing options. 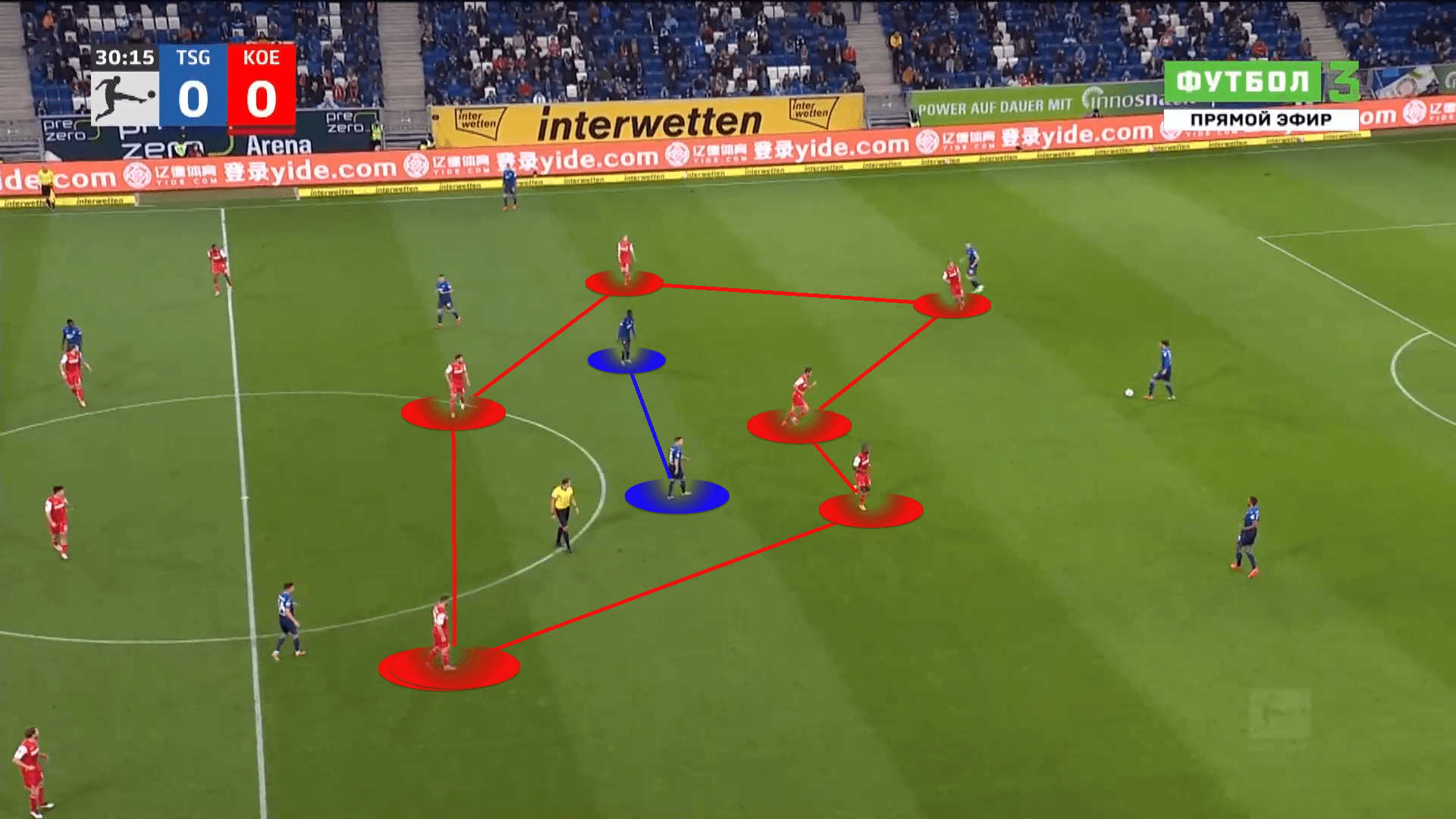 As the second half began, FC Koln’s impressive display did not continue. With Hoffenheim’s newly formed pressing tactics, Koln was unable to find players within the half-space to combine and find openings in behind. One major concern regarding Koln’s second-half collapse was the lack of reaction and change from a tactical or managerial point of view. As the game progressed, Koln’s intensity gradually faded away; they did not utilise any variations when their opponents were starting to find openings and create numerical advantages in midfield. Regardless of the game-state, Koln did not change in any way.

With a team littered with young talent and poised veterans, Hoffenheim is yet to get going since the departure of now Bayern Munich manager, Julian Nagelsmann. The same cannot be said for FC Koln who are loving life after a miserable Bundesliga display last season. Going into this game, some may have been considered Koln favourites due to their good form entering this game. Regardless of the positions of both teams in the league table, Hoffenheim came out on top due to the ability to change approach and be flexible, two concepts FC Koln failed to show.