FAWSL 2021/22: How City and United cancelled each other out in the Manchester derby – tactical analysis

Manchester United Women hosted one of FAWSL’s most historic and entertaining games, the Manchester Derby, at Leigh Sports Village and the game ended with a 2-2 draw that doesn’t serve any of the two teams and especially Manchester City Women who are going through a difficult start of the season in terms of results and performances.  The draw doesn’t help the Citizens at all as they are actually holding the ninth spot while Manchester United are five points away from the team which is at the top of the standings, Arsenal.

This tactical analysis article will explore extensively what happened in this match while shedding some extra light on Manchester City’s defensive issues and their good but not sufficient attacking reaction while considering Manchester United’s overall performance and what lacked their tactics to exploit their numerical superiority effectively following Stanway’s exclusion.

For Manchester City, Gareth Taylor opted for the usual 4-3-3 formation while having injury issues especially for the defensive players. The team started the match with Karima Benameur Taieb as a goalkeeper, Georgia Stanway as a right-back due to the absence of Lucy Bronze, Jill Scott and Alex Greenwood as centre-backs, and Demi Stokes as a left-back. The midfield was composed of Keira Walsh, Caroline Weir and Filippa Angeldal as central midfielders with Lauren Hemp and Janine Beckie as wingers and Khadija Shaw as a striker. 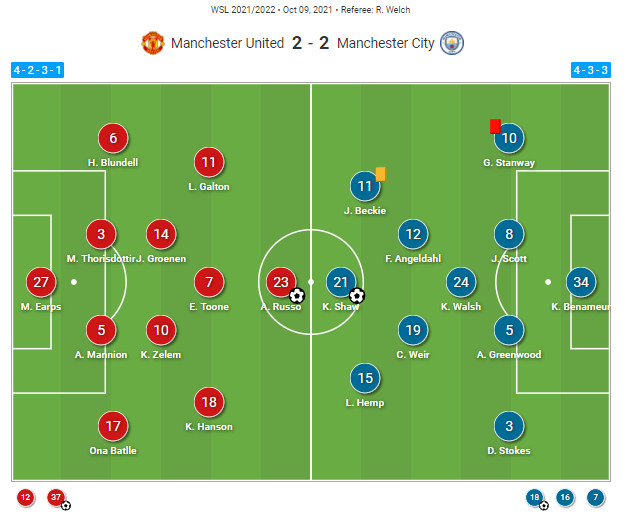 The game did not start in the way Manchester City wanted as they were not able to hold the ball too much or dictate the game. Manchester United were brave enough to ensure that their opponents don’t get a lot of possession periods since they were aware of the danger that it might create for their defence. Manchester City therefore tried to exploit their possession phases but their build-up and playmaking was a bit too slow in a way that made Manchester United players have no problems nor delays in marking their direct opponents inside the final third.

In fact, Manchester United had more possession than their opponents with 51,95% against 48,05% for Manchester City. And of course, Stanway’s red card played a big role in having these percentages.

Manchester City made some attacks but most of their actions didn’t seem to be planned or well-prepared. Most of these opportunities were created thanks to Hemp’s solo efforts and penetrations with some attempts from Shaw too.

By cutting inside so often, Hemp was able to dribble past her markers and aim at shooting whenever she can, but this alone without support was not enough for Manchester City to score.

Like you can see in this example, she was able to get past three defenders and still shoot on goal but Earps was attentive enough to save her shot. 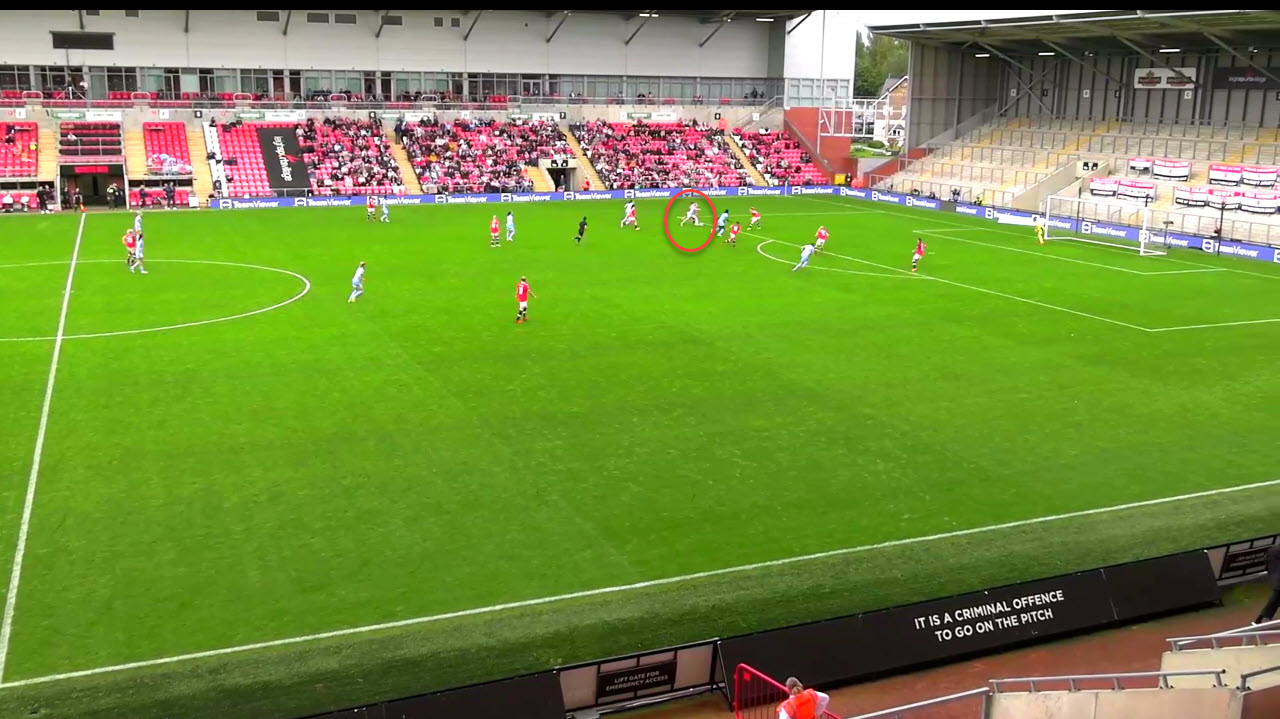 Manchester City were only able to score when they played collectively and relied on Shaw’s finishing skills. In reality, it was Stokes who was the main source of this first goal as she saw Shaw’s movement inside the box and sent her an accurate cross while advancing. And despite the red card, Manchester City could have scored more than two goals if they used their players in the best possible way as they have players with great vision like Weir, Greenwood, Stokes, Hemp and others. And this goal just showed how the team can score beautiful goals without necessarily complicating the action. 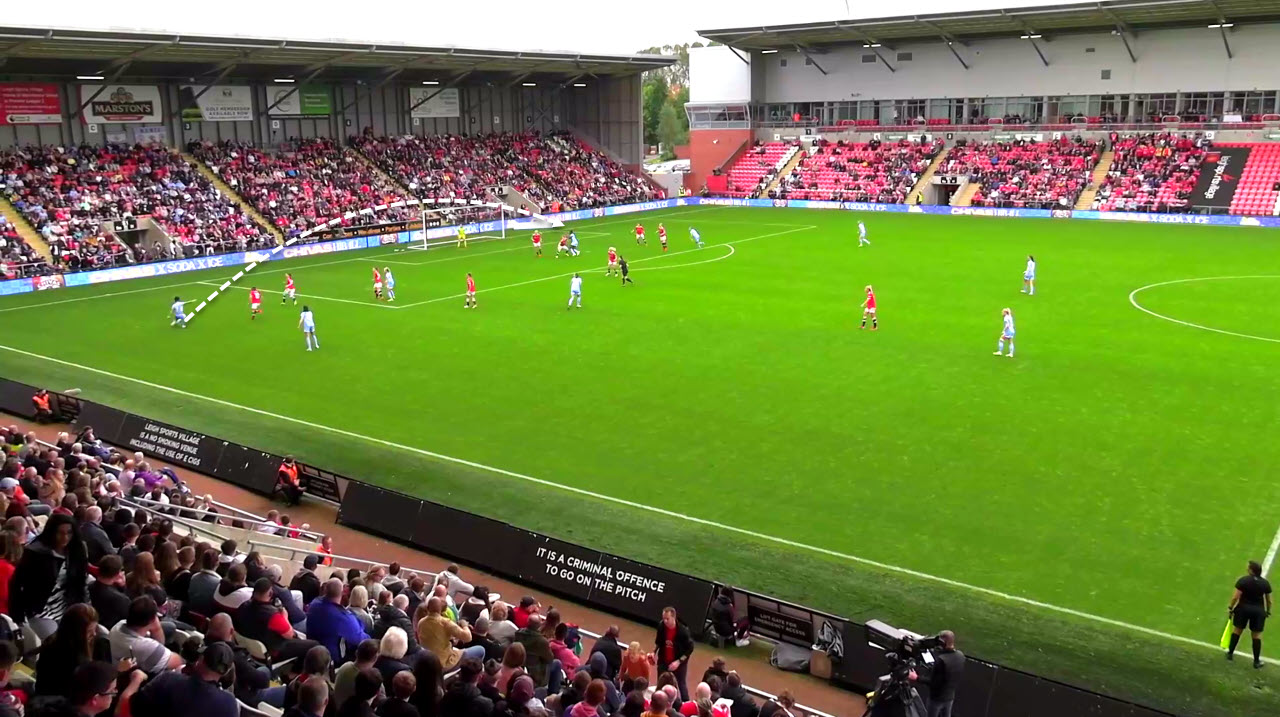 And as opposed to Manchester United, Manchester City didn’t really press high continuously and even when they did so, the execution was not well organised to disturb the defenders or lead to mistakes. But despite that, they were able to exploit the few goalscoring chances that they had to get a draw after Manchester United made a comeback.

More importantly, what made Manchester City’s match even more complicated was Stanway’s unexpected and avoidable red card in the first half. Although Stanway’s mistake was unnecessary and made her team suffer in the rest of the match, she should not be blamed a lot given that she was playing out of position and that could have increased her stress.  Such a scenario obliged Gareth Taylor to change the team’s playing style and be more cautious at the back since he knows that a defence made up of Greenwood, Scott and Stokes can lead to problems against a team like Manchester United.

Even though Manchester City’s defensive mission was somehow successful, two marking mistakes led to conceding two goals from their opponents: the first was due to a wrong marking to Staniforth which allowed the latter to surprise Benameur and score with a back-heel shot, and the second goal was conceded after three Manchester City players were not able to stop Russo or prevent her from shooting by just blocking the shot. These two mistakes were well exploited by Manchester United’s attacking players who showed in this match that they gained some more experience and that they can challenge any of the big FAWSL teams this season despite all the pre-season issues. 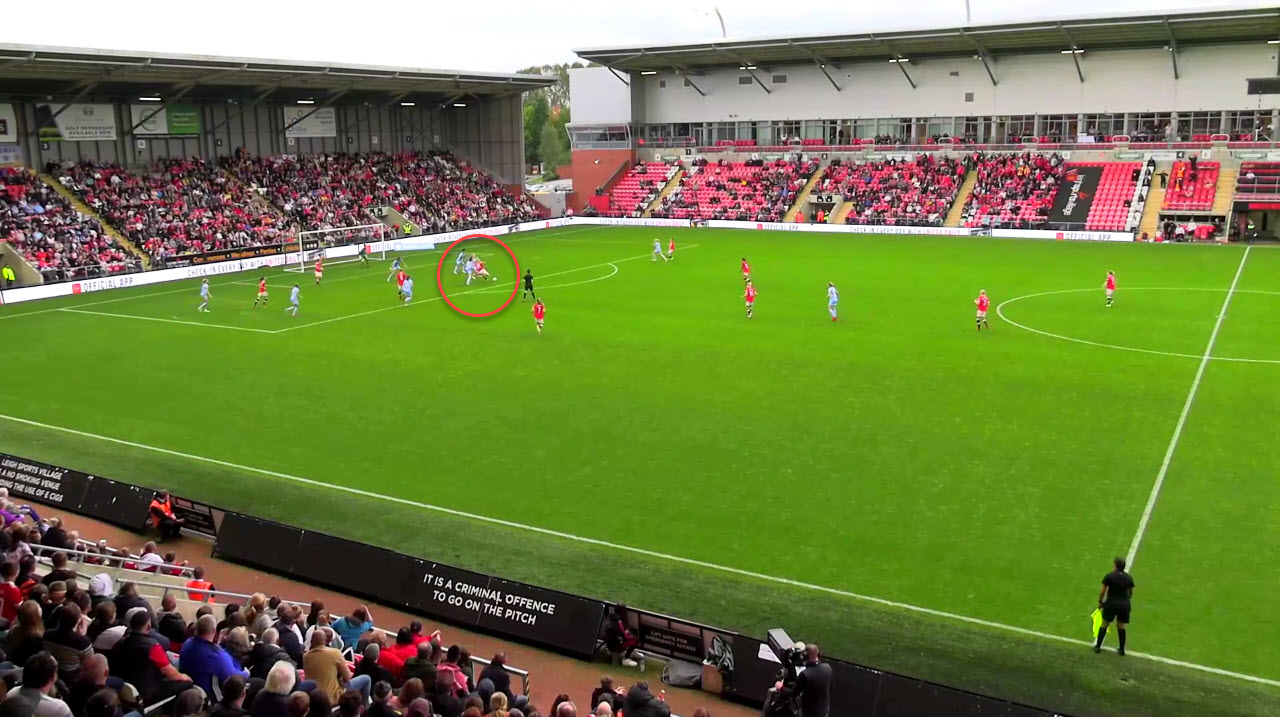 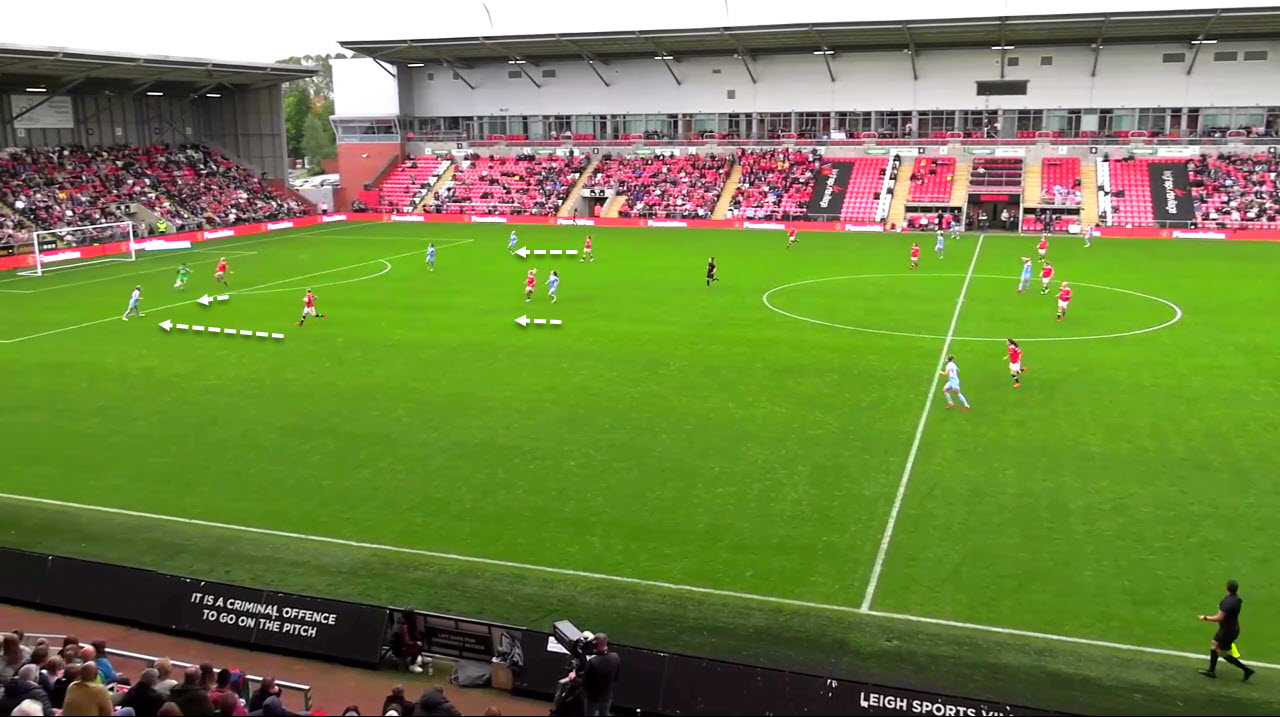 Although Manchester United’s pressing and finishing were effective and useful, the team could have done more in delicate moments of the match and especially when they had the opportunity to get a third goal. As you can see in this action, Manchester United’s player found herself along in front of Benameur following a big defensive mistake and a giveaway from Manchester City’s defence. But unfortunately for the Red Devils, the finishing was not on point and the team lost a golden opportunity to win the match. 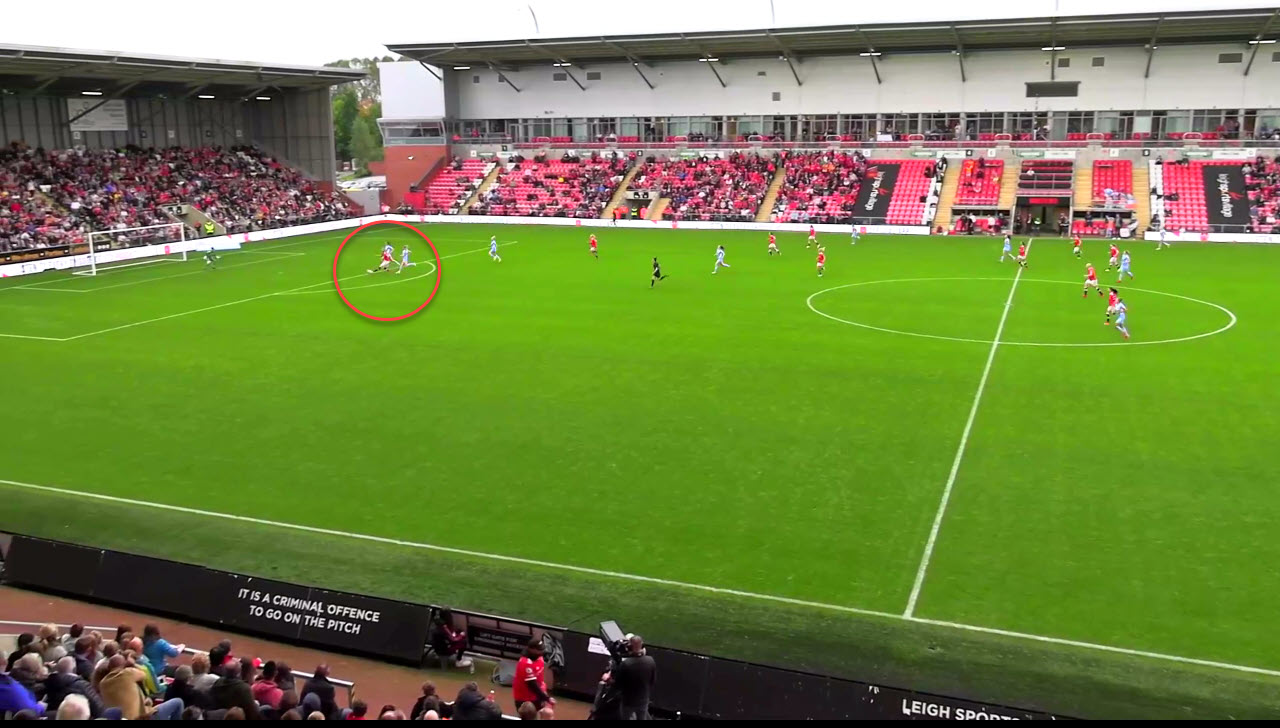 Manchester United played better overall while Manchester City resisted and did their best to keep their advantage despite the red card, and this leads to understanding that both teams deserved winning. Therefore, the draw can be considered as a fair result for both teams even though it doesn’t serve a lot in terms of points especially for Manchester City who are still struggling to reach the top of the standings.

Much more organisation is needed for the team in order to play with more confidence and be aware of their abilities. This will need some more time but the team should know how to exploit half-chances in the future and use their experience to secure their advantage. With the return of players like Bronze, the team’s performances will possibly be more balanced too as the experimentation was not fruitful in this match and Stanway’s performance as a right-back was not encouraging.

On the other hand, Manchester United are now closer to the top three teams and should continue in making consistent good performances to remain at the top because continuity can be the team’s worst enemy this season.