While France had a disappointing Euros where they massively underperformed expectations and crashed out early into the knockout stages against Switzerland, Spain on the other hand, exceeded a lot of expectations with their young squad and made it to the semi-finals only to lose to the eventual tournament winners Italy. They exacted their revenge by beating them last time around in the semi-finals of the Nations League.

France, on the other hand, beat Belgium after a splendid second-half performance that saw them come from 2-0 behind to beat them 3-2.

This tactical analysis features the tactics deployed by both the managers and how France managed to beat Spain to clinch their first Nations League title. Let’s begin the analysis.

Deschamps made two changes to the lineup that Belgium in the semi-finals. Monaco man Tchouameni came in place of Rabiot and PSG star Kimpembe replaced Bayern Munich’s Lucas Hernandez. 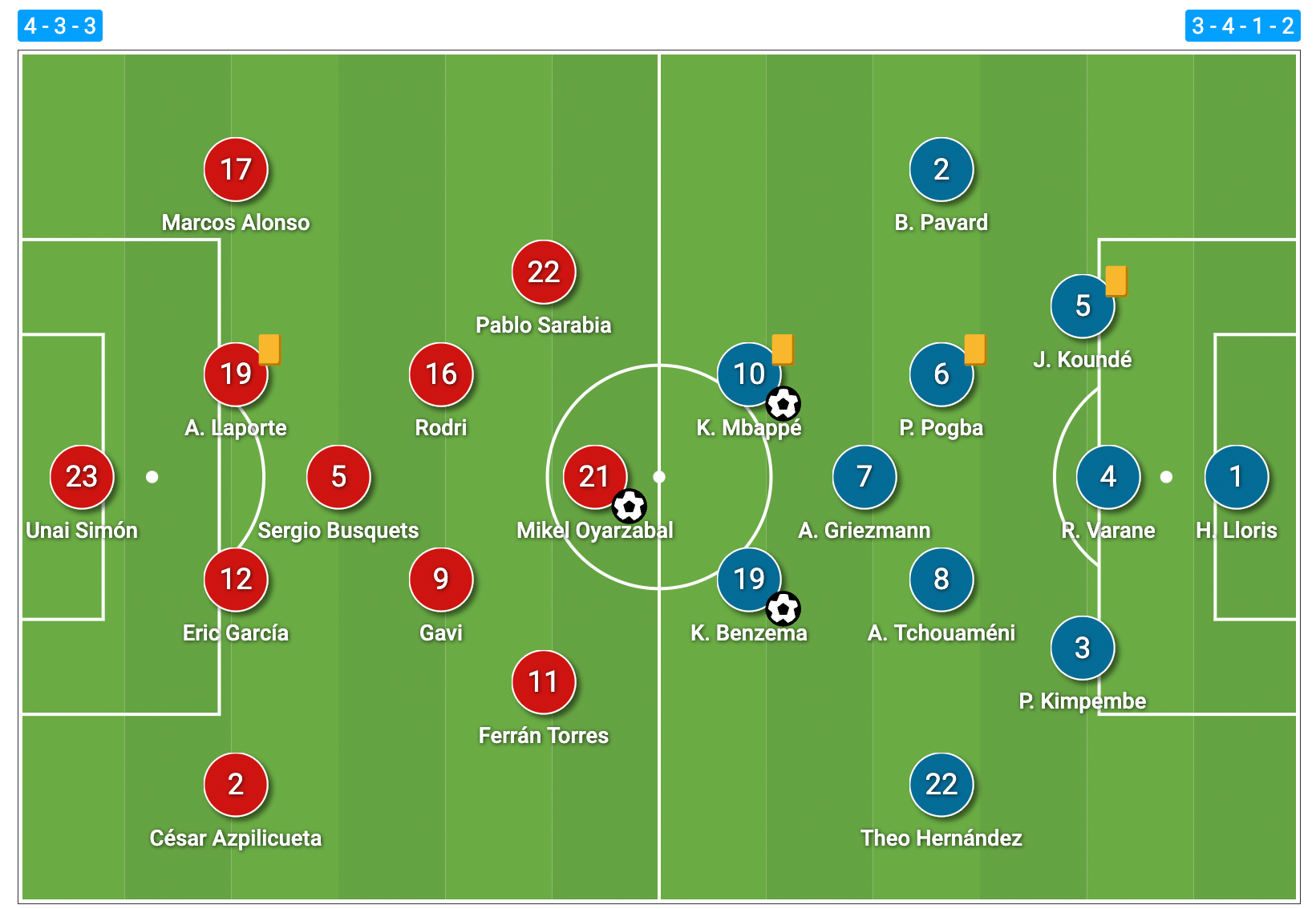 Luis Enrique, on the other hand, also made two changes to the lineup that beat the reigning European champions as Pau Torres made way for Eric Garcia while Manchester City’s Rodri was drafted in to replace Koke.

Spain’s plan for the game

It was assumed with the changes that he made to the lineup that Enrique might go with a 4-2-3-1 system with a Rodri-Busquets double pivot. The move also made sense from a perspective where the presence of Griezemann dropping into the wings means a pivot should be present to mark him while the other would covering the space centrally.

But Enrique went with a 4-3-3 where Rodri was used as a CM in their system while Busquets played as the lone DM. But Rodri’s positioning was oriented a little deeper than usual and was not conventionally a CM like one. 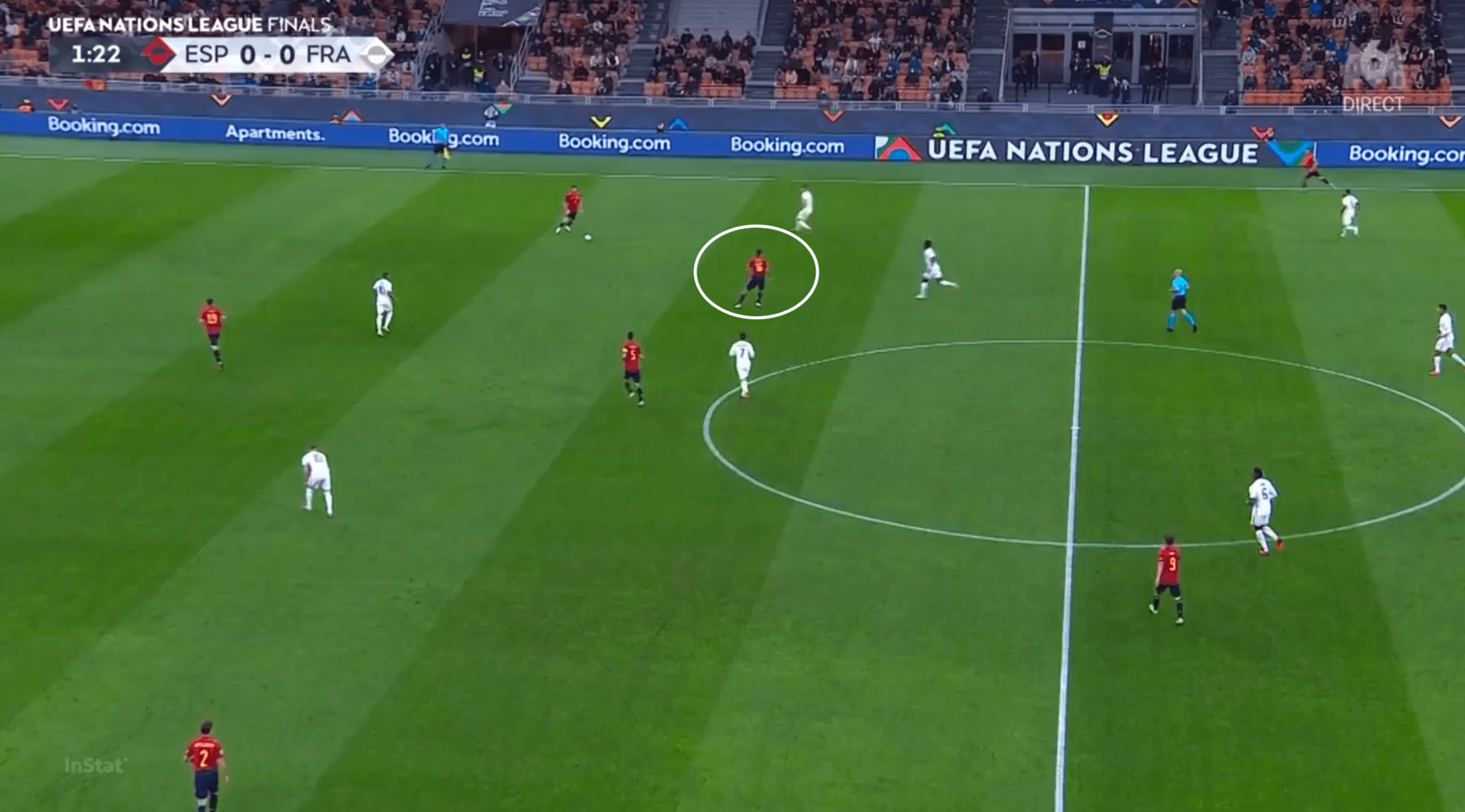 We can see his positioning in the image above as he has been dropping deeper when compared to the positioning of Gavi who is very higher up the pitch on the other side. Obviously, Rodri was in the ball near the side, but throughout the game, this was more of the case as Spain decided to use him slightly deeper when compared to Rodri. This would often keep Spain a little too unbalanced and straightforward in their approach as Rodri would fail to make runs into the half-spaces preferring to stay deep.

Also, the angles in which he showed for the passes were often wrong as they did not give him the proper touch to play in the half-spaces. It was later in the second half that Enrique decided or probably asked him to make more runs into the channels and attack the line. We can see an example of that in the image below. 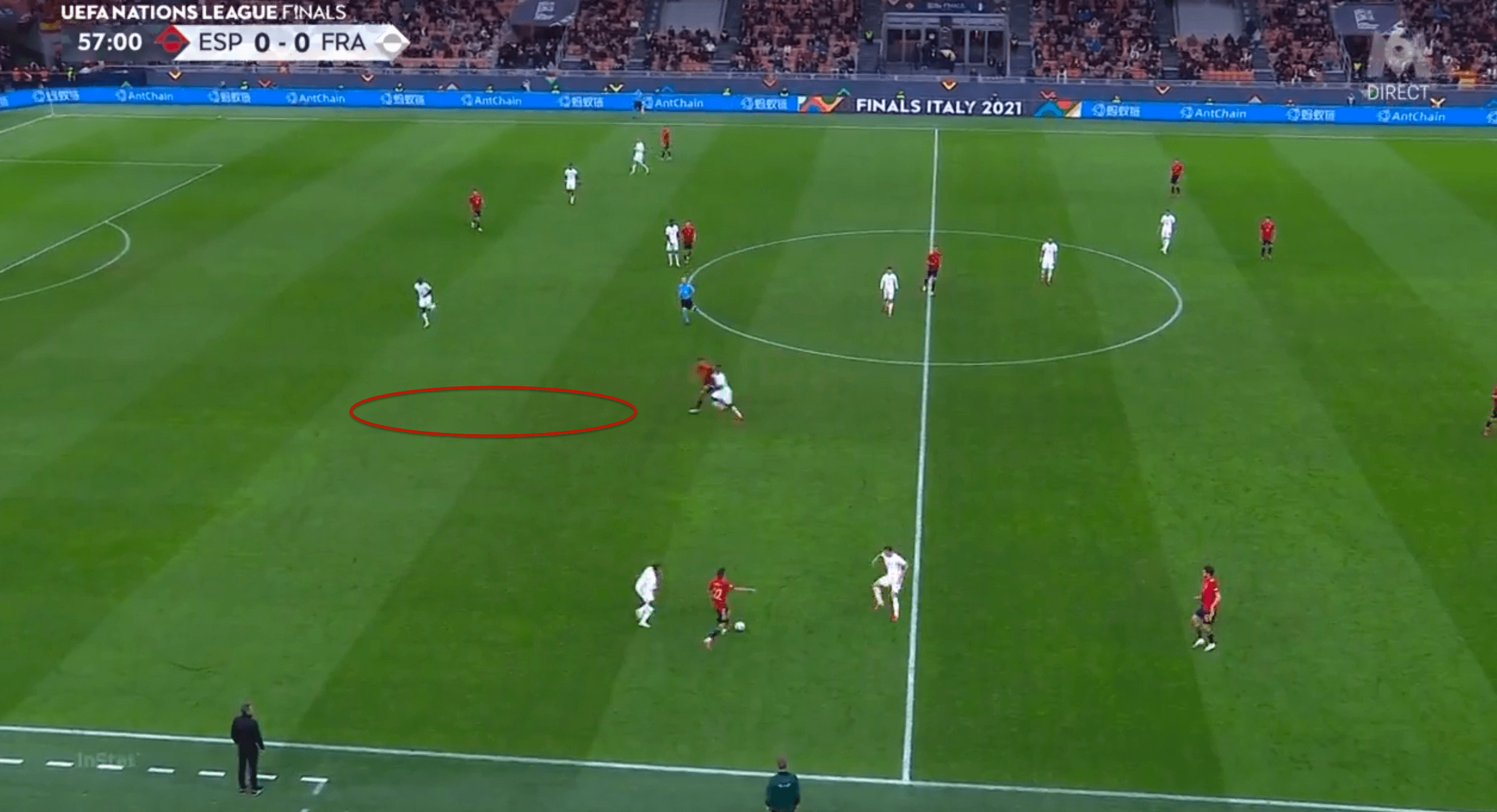 Gavi on the other side was more used for the rotations and combinations with Torres and constantly occupied either the wings or the half-spaces. Torres would start very wide to stretch the French defence horizontally and that would allow Gavi to make runs into the channels. If the marker would follow him behind it would allow Torres the space to cut inside and exploit the space. 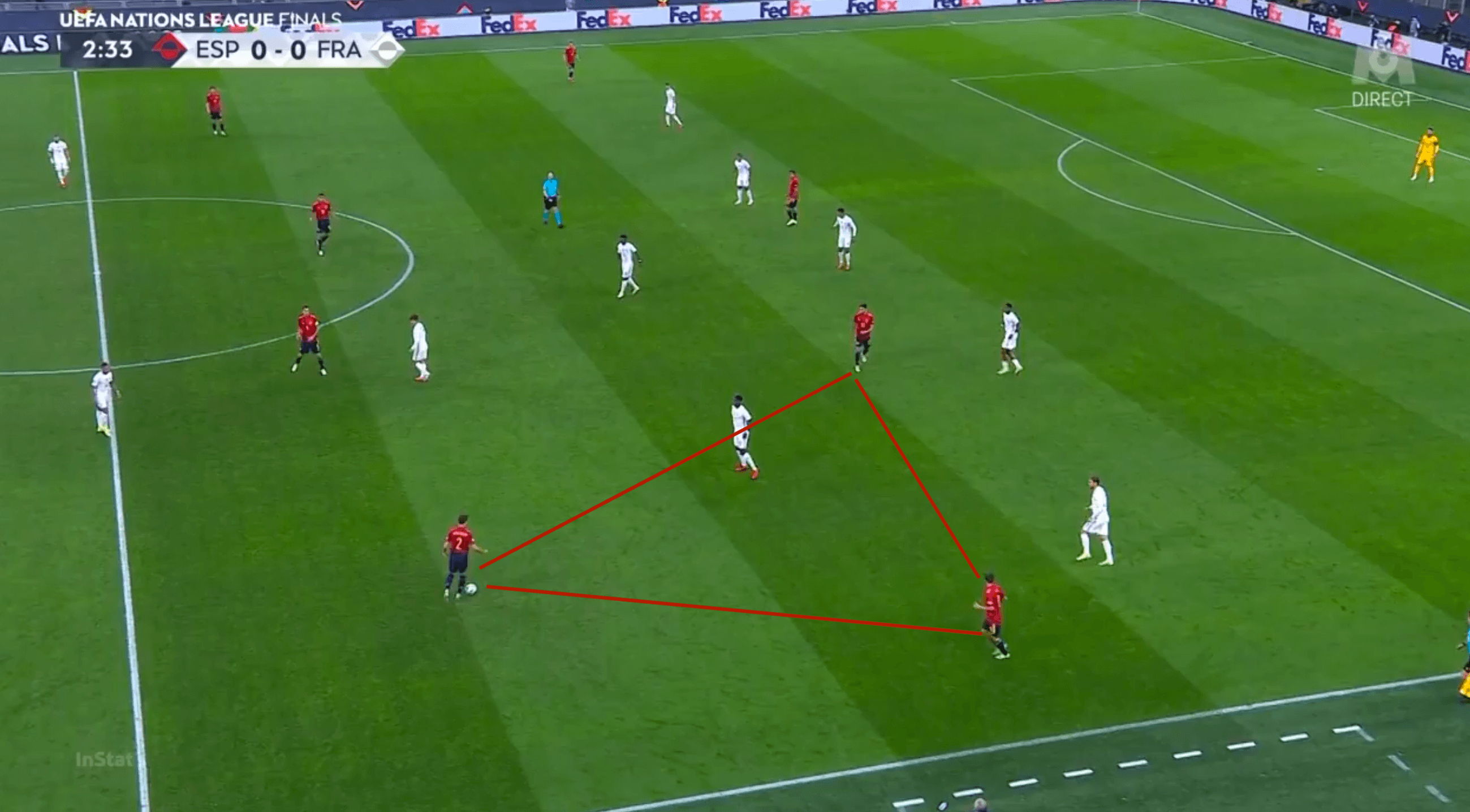 Another interesting thing that Spain did when they had possession was their strategy to play out from the back. France went with a 3-4-1-2 system which on paper was exactly a man-man opposite to Spain’s 4-3-3. So the press if executed perfectly would mean that Spain would have a very tough time bringing the ball out from the back. So Enrique decided to drop his FBs very deeper while build-up. The forwards Benzema and Mbappe were fixated on the CBs while Griezemann covered Busquets.

The French WBs could not press very high as that would expose space in behind the defence and leave the CBs dealing with the winger in 1v1 situations if a simple long ball is played. So the WBs decided to stay deeper that would give a simple passing option for Unai Simon to play the ball to either Azpilicueta or Alonso and they would then carry the ball forward. We can see the space that Azpilicueta has when he receives the ball. 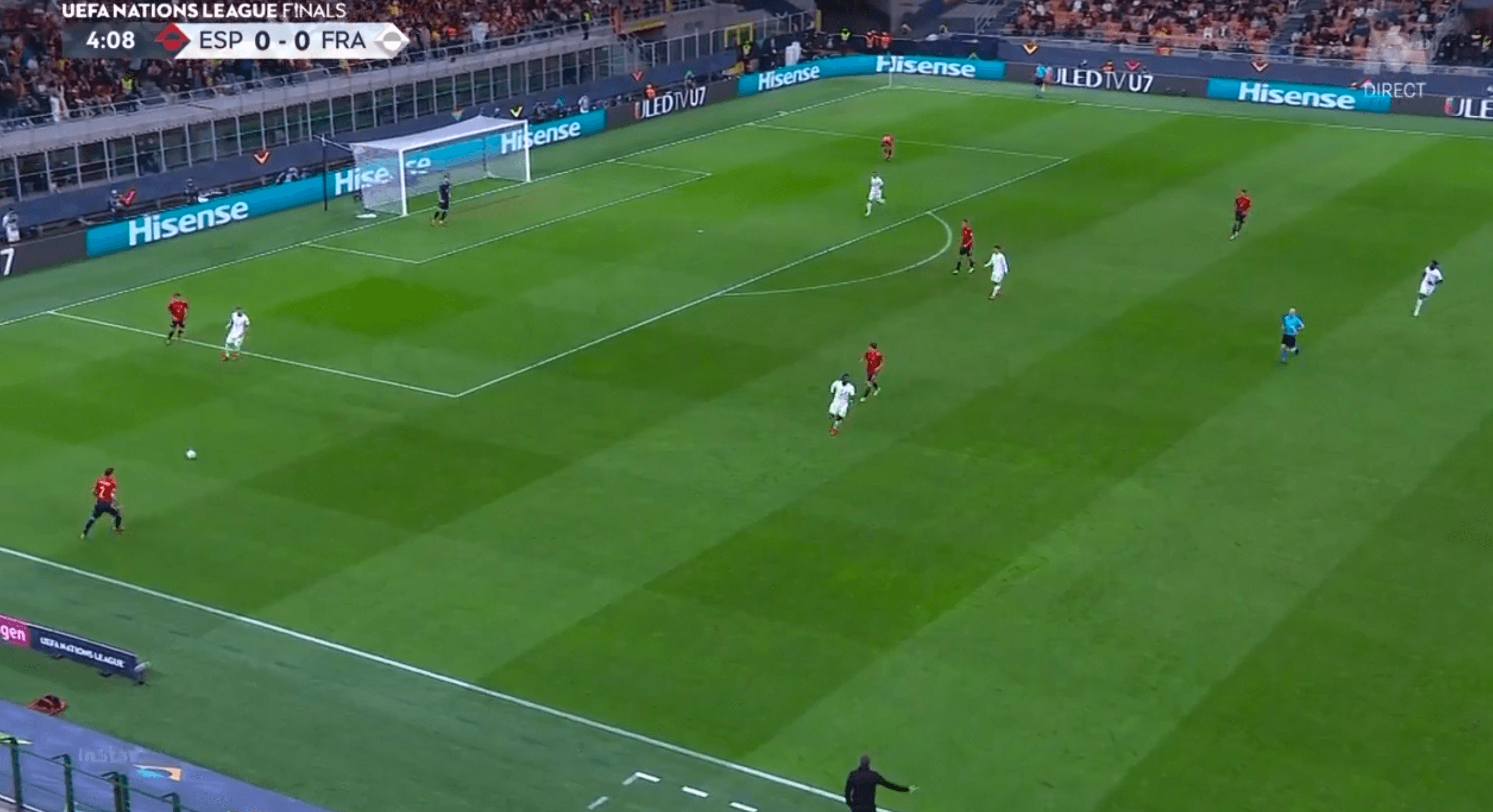 This was something that Spain would often look to do that is to give spaces for their full-backs to carry the ball forward. Even with this setup in the buildup, it was very important for Spain to get their passes right as the France WBs would be making their way higher up the pitch to press. So if Spain delay their process France would slowly gain the upper hand and would look to turn the ball over higher up the pitch with their WBs now reaching the Spain FBs and marking them closely. They were a couple of instances where this happened as a back pass would delay the build-up that would give time for the French players to adjust their positioning accordingly.

With the double pivot, the France midfield of Pogba and Tchouameni was exposed laterally as they weren’t effective to cover the space beside them. The likes of Gavi and Rodri manipulated their positioning and that gave spaces for the FBs to run into. We can see an example of that in the image below. 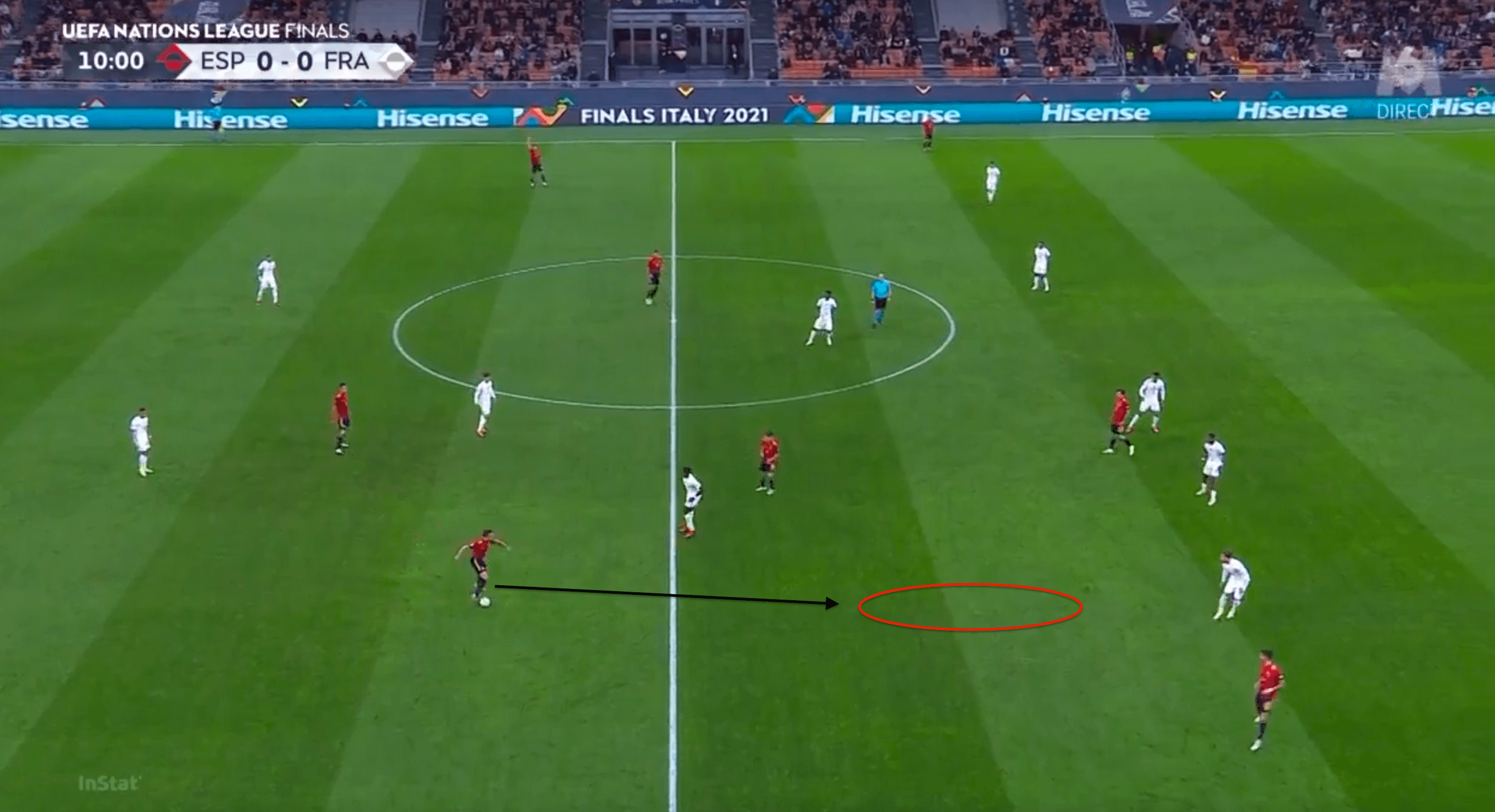 With Ferran Torres positioned very wide, it was obvious that Enrique wanted to do something like how Pep does it with his team at Man City. He used Ferran on the right side which did make sense but the issue was France went 5 on 5 against Spain frontline. So the markers were fixated on their players. Also, we can see an instance below where Torres wasn’t able to play a first-time pass to the runner behind. These are the situations where a left-footed winger could have been an advantage.

In the first half, Enrique went with a unique off the ball system where unlike the 4-3-3 formation he decided to press France in a 3-5-2 with Ferran Torress very deep like a WB. The plan was to keep double tabs over Mbappe on that side and aid Azpilicueta so that the Chelsea veteran won’t be exposed to the French youngster. We can see that in the image below where Torres is positioned very deep. 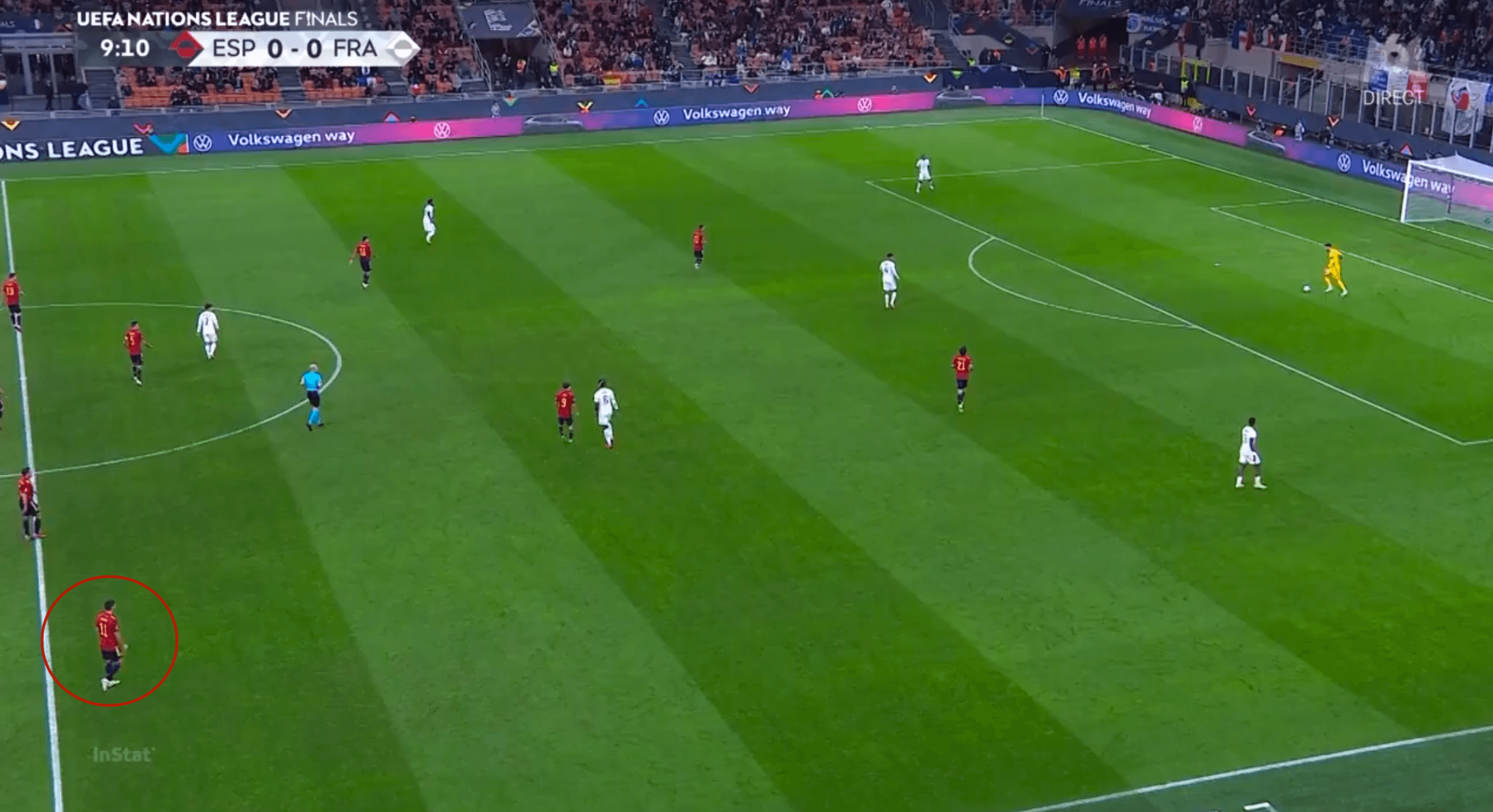 This eventually led to another problem where now the front two had to press the entire French backline that had 3 defenders. Though they found it well when the CBs weren’t positioned well or very close to each other, but if they stretched the pressing task would be very daunting for the likes of Oyarzabal and Sarabia.

Oyarzabal has been Enrique’s striker in the absence of his regular Alvaro Morata. Despite being a left forward, Enrique has got the best out of him by using him in the CF position while Oyarzabal has himself offered a lot to the current Spain setup with his abilities. Spain prefer a front-three that is very fluid with their play where the forwards would constantly exchange their positions with each other and are comfortable from playing across the pitch.

Oyarzabal in particular displayed great movements throughout the game and was constantly looking to threaten the French defence. He would often drop deep dragging the central CB with him and also managed to hold the ball well for large parts of the game. We can see him dropping deep and dragging one of the French CBs with him. But the below situations came very deep and wasn’t an ideal situation where the wingers could exploit the space behind. 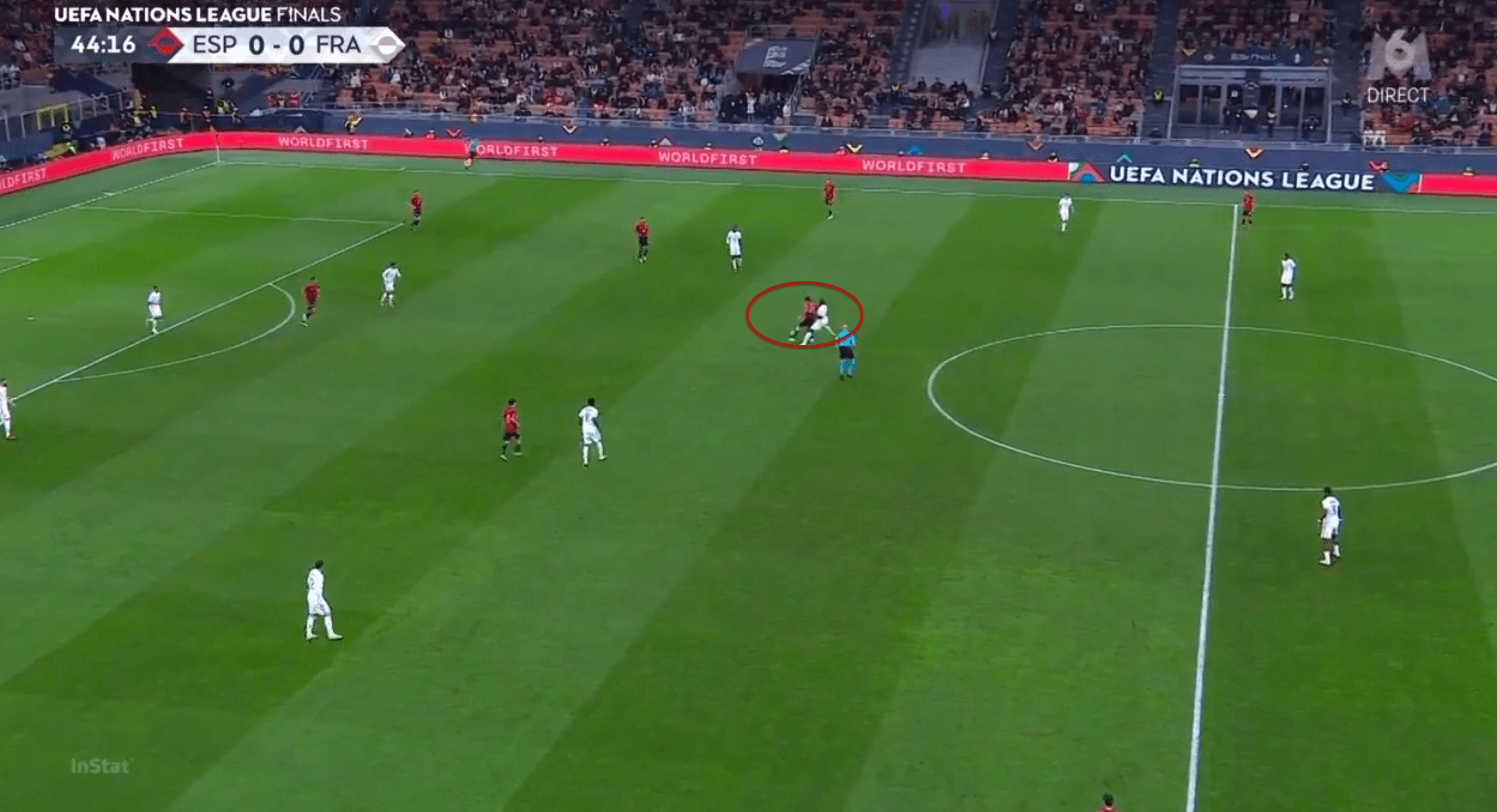 His goal was an exemplary instance that showcased his movements where he made a brilliant double movement to trick Upamecano and stay offside to reach into a long pass from Busquets. We can see that in the image below where he initially drops dragging Upamecano with him. Then he suddenly changes his direction by quickly making an opposite run and was found by a pass from Busquets which he completed to score a goal. 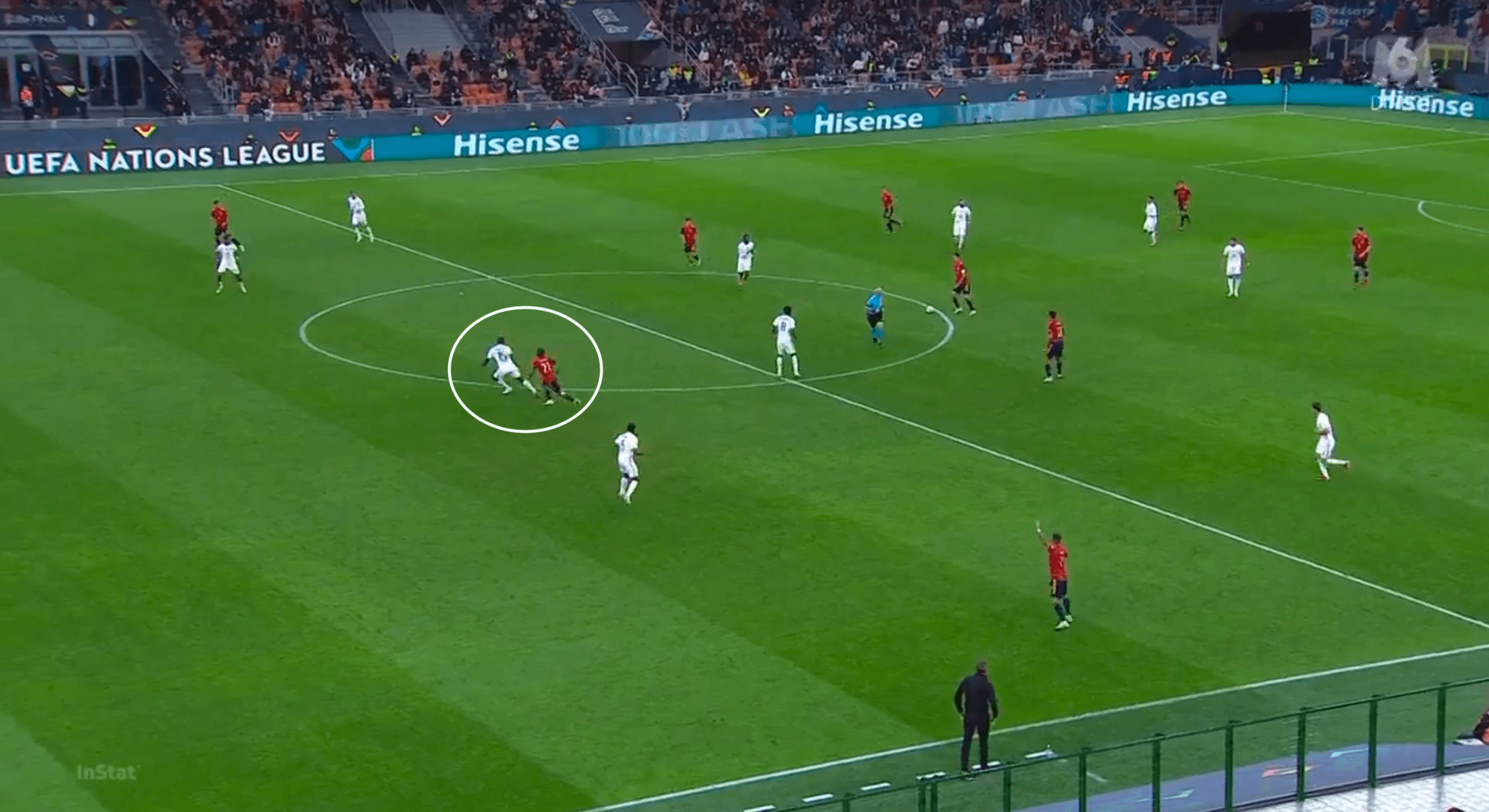 France’s quality makes up for their issues

France, despite possessing much better quality players than their opponent, were more imbalanced and unstructured than them. More importantly, they do not look to maintain possession and are more of counter-attacking side in nature despite the abundance in technical quality they have. They just had 25% of possession over the entire game and only started to look threatening once Spain scored their goal.

We can see an example of their structural imbalance and improper staggering where the players are occupying close positions with respect to each other which makes it very difficult for the ball carrier to play a pass. Also, Spain can easily close the lanes committing their players closer to these players too and we can see that they have a huge space that they have left that isn’t occupied by any of the France players too. 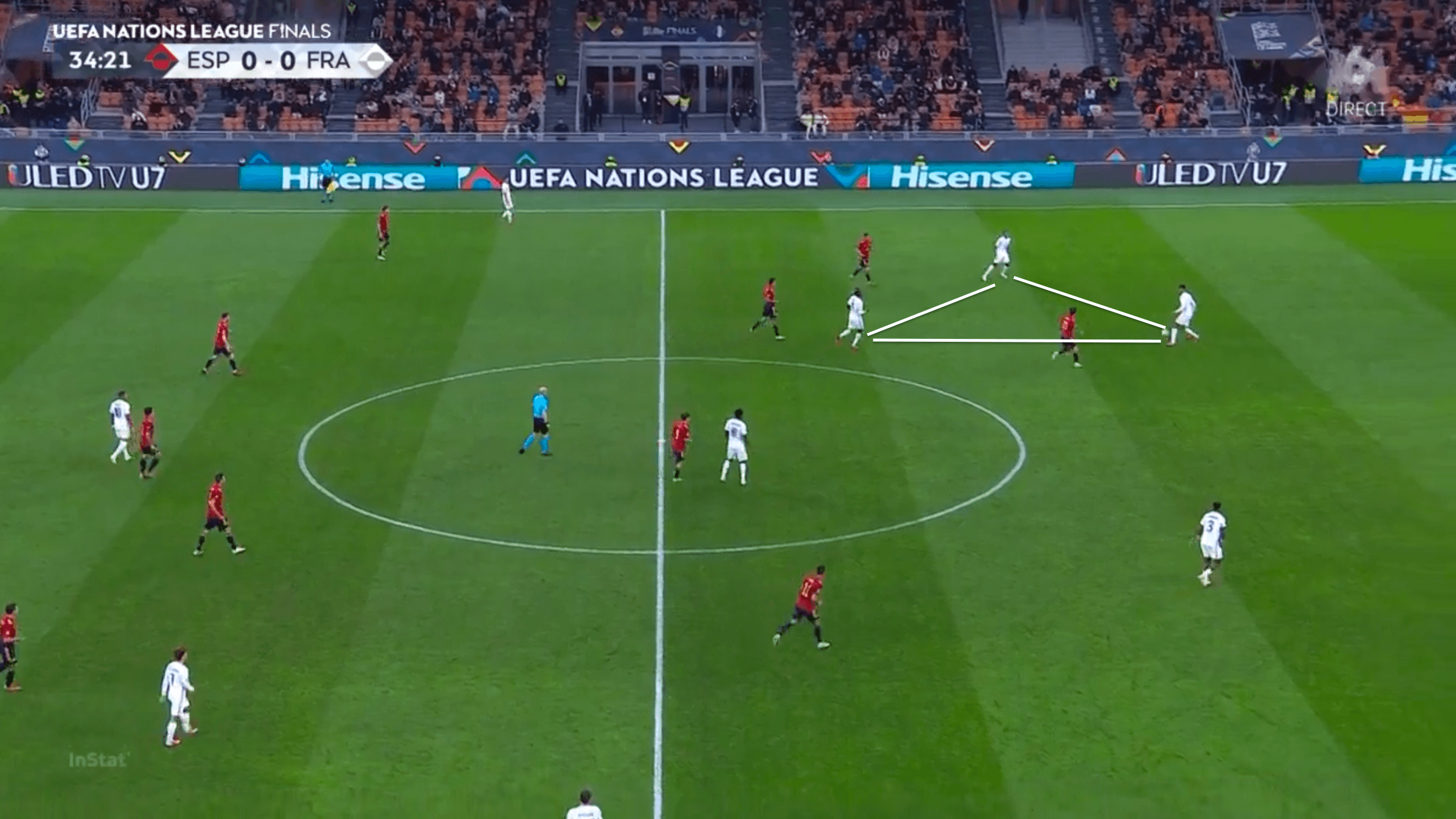 Deschamps also went with a change in the positioning of Griezmann where the French superstar always looked to position himself on the right of the pitch. This meant that one of Busquets or Rodri had to move to the wings or even both would have to leave so much space centrally. Receiving there also meant that he would get time and space on the ball and would look to play balls over the top of the defence. 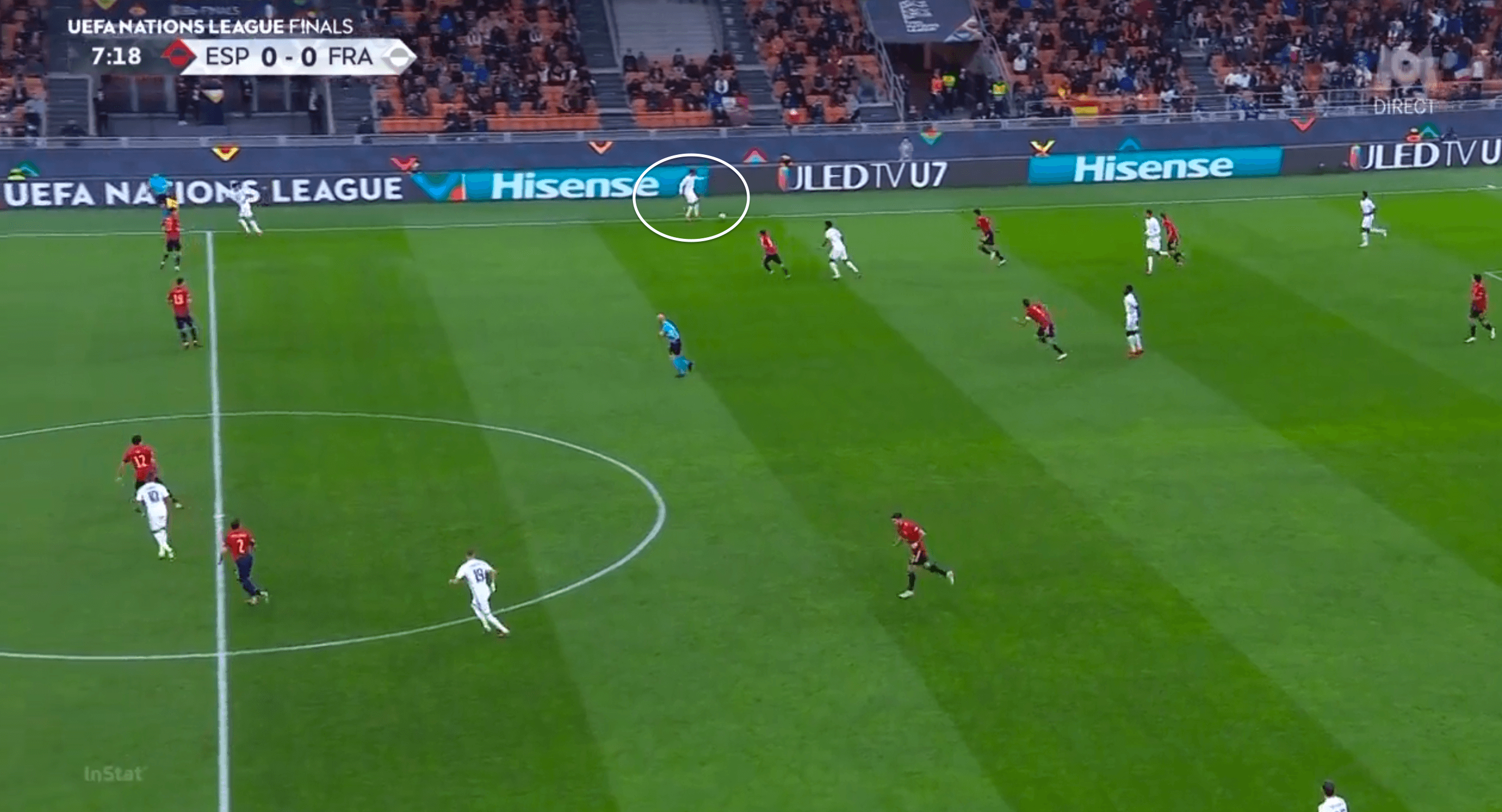 We can see an example of Griezmann dropping wide and in the right half-space and Busquets and Rodri are also dragged away from their position meaning that there is a huge central hole in between. This directly lead to their first goal where Pogba was able to make a run into the space and play the ball to Benzema who scored to equalize the scoreline. 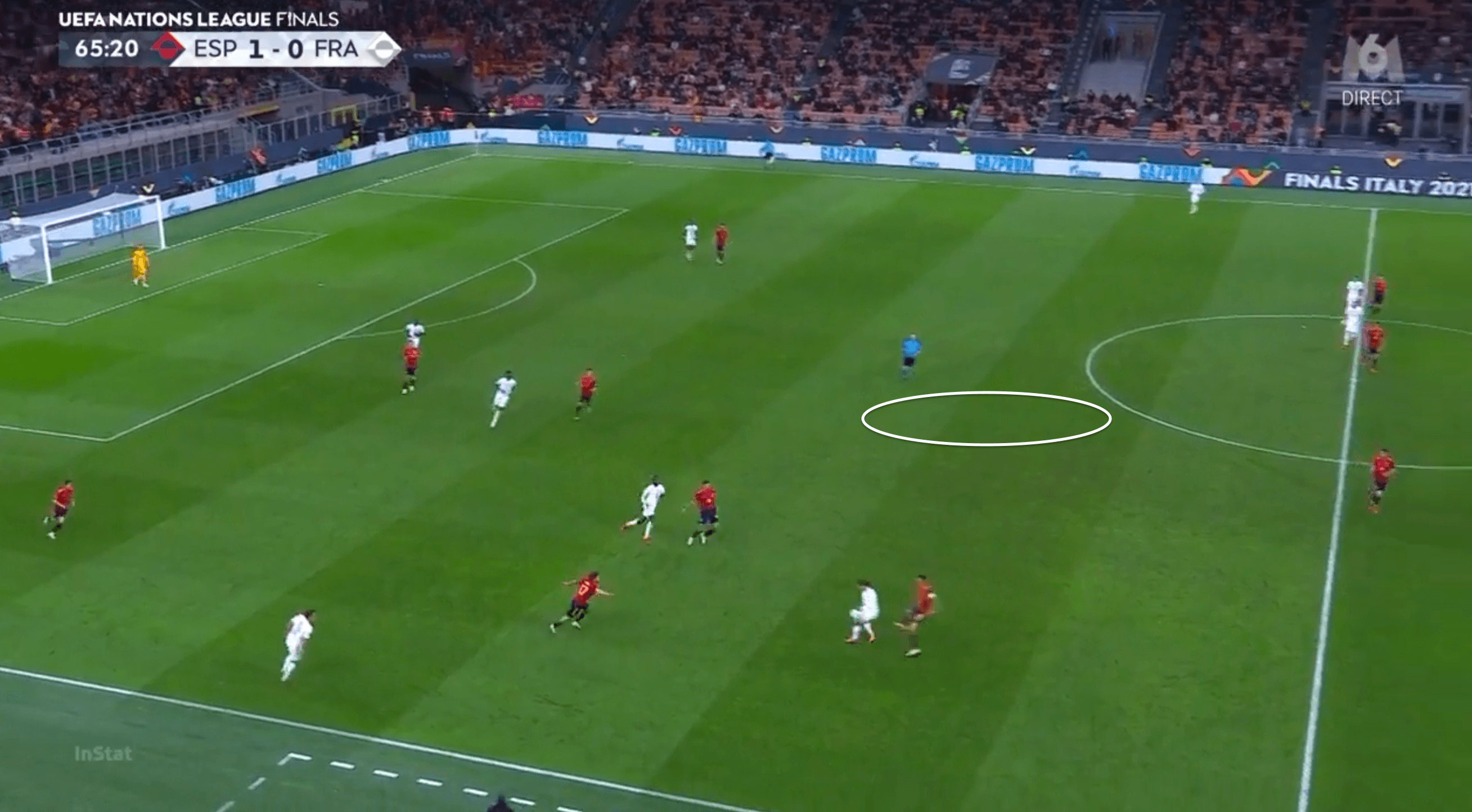 France eventually clinched their winning goal with over 12 minutes to go which also looked controversial with respect to Mbappe positioning himself in the offside. Despite being never under control throughout the game, the quality of Benzema, Mbappe and etc were enough for the defending world champions to go and clinch their maiden Nations League trophy after a disappointing Euros campaign. 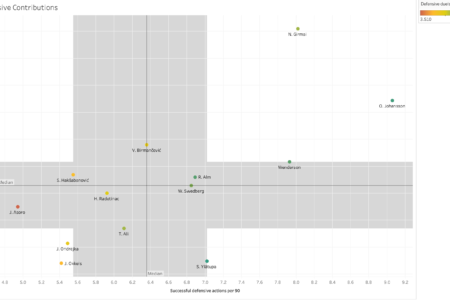