FIFA World Cup Qualifier 2021: Why Uruguay should be pleased with their performance vs Colombia – tactical analysis

The international break is upon us, and it has started with a bang in South America as national team powerhouses Colombia and Uruguay faced off in a crucial World Cup qualifier. Colombia went into the game, with a great deal of confidence, with them defeating Chile at home 3-1 in their last outing. Additionally, Colombia placed 3rd in last summer’s Copa America, eventually falling to the outright winners of the competition, Argentina, who beat them on penalties.

As for Uruguay, they sit 3rd in the World Cup qualifying table and won their last two games in the process. Both nations involved have shown over the years that they have the quality in players to play exciting football as well as going far in tournaments, taking the previous World Cups and Copa America as case and point.

This tactical analysis will centre around Uruguay’s first-half dominance and the alterations of their build-up play in possession. Furthermore, we will be looking at half-time alterations made by both teams and lastly, Colombia’s problem with the ball.

Versus Colombia, Uruguay used a different shape compared to their last game, switching from a 4-4-2 diamond to a 4-3-3 shape. Fernando Muslera started in goal with Nahitan Nández, former and current Atletico Madrid centre-backs Diego Godin and Jose Maria Gimenez, and Roma’s Matias Vina as the back four. In their midfield there was Rodrigo Bentancur, Federico Valverde and Matías Vecino. Lastly, Uruguay’s attacking trident up front during this match was composed of Giorgian de Arrascaeta, Brian Rodríguez and former Barcelona and reigning La Liga champion Luis Suárez.

For the away side, Colombia remained in their standard 4-4-2 shape with national team captain, David Ospina. The defence was made up of Yerry Mina, Stefan Medina, Carlos Cuesta and Johan Mojica. In midfield, Juventus’ Juan Cuadrado, Wílmar Barrios, Mateus Uribe, Luis Díaz. Up-front, Radamel Falcao and Rafael Santos Borré leading the line for Los Cafeteros. 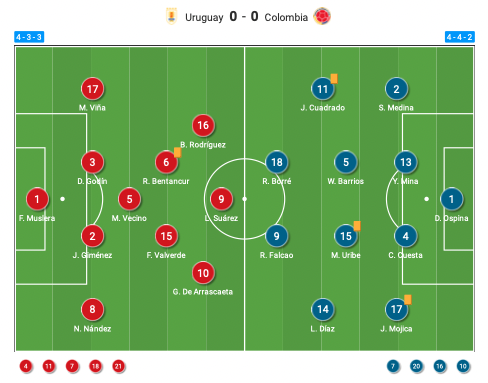 When Uruguay had possession of the ball, they made good use of it as they were able to pile on the pressure during the beginning stages of this match. As mentioned prior, Uruguay lined up in a 4-3-3 formation and during the build phase of play, Uruguay pushed their fullbacks high and wide and positioned themselves on the midfield line in the middle third.

Uruguay’s build-up patterns varied throughout the match, as at times they would begin to play with a back three made up of Jose Maria Gimenez and Diego Godin with the addition of Rodrigo Bentancur. To accompany them would be a single-pivot which in most cases would be Matías Vecino. 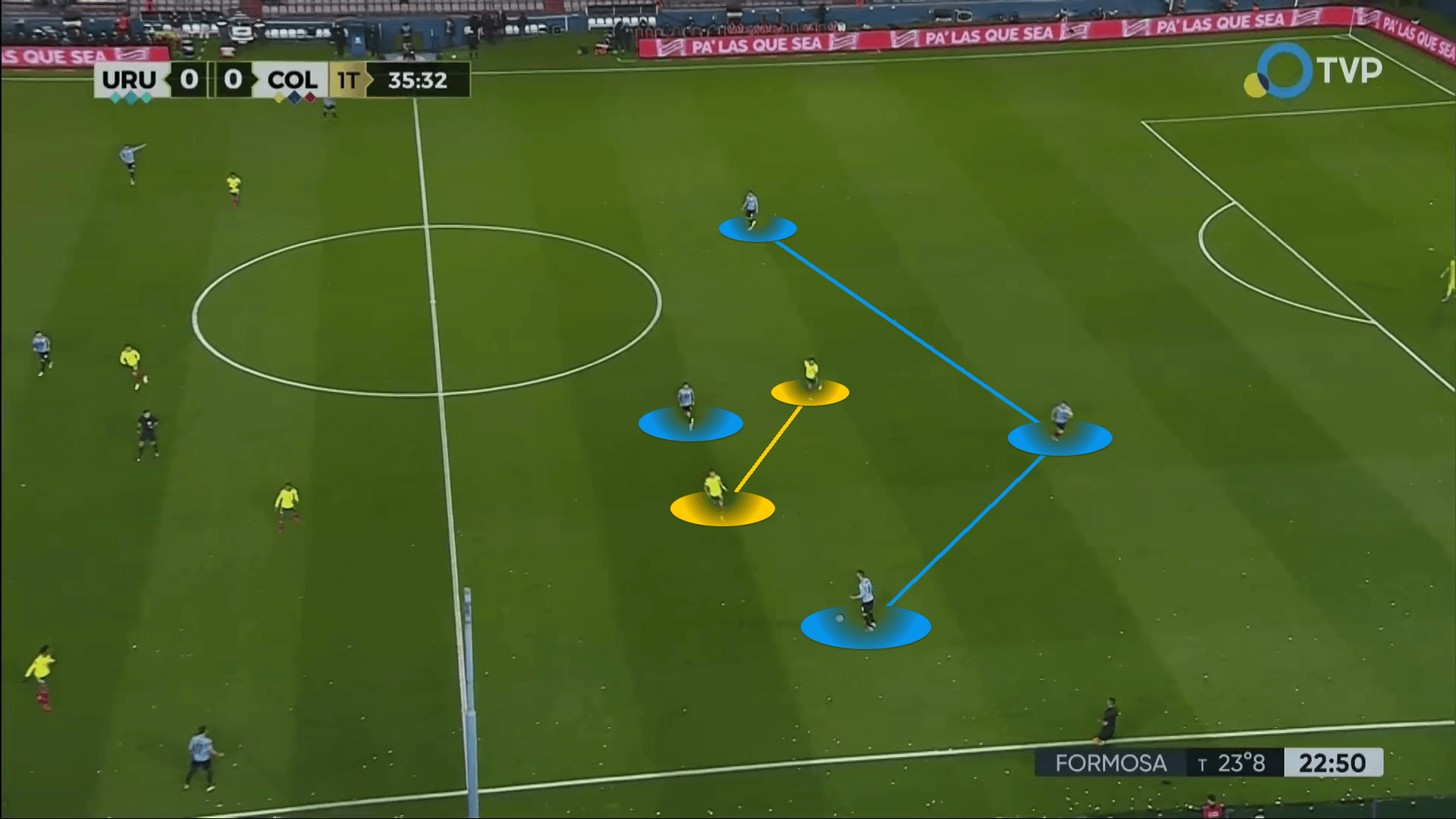 Another variation Uruguay utilised within this phase was a 2-2 vertical box shape which consisted of Gimenez and Godin on one line and Bentancur and Vecino ahead of them. Both of these shapes were effective thanks to the numerical inferiority they created. Colombia set up in a 4-4-2 block with their front two ordered to press and during these types of scenarios, a 4v2 situation was occurring in Uruguay’s favour which allowed them to progress the ball forward. 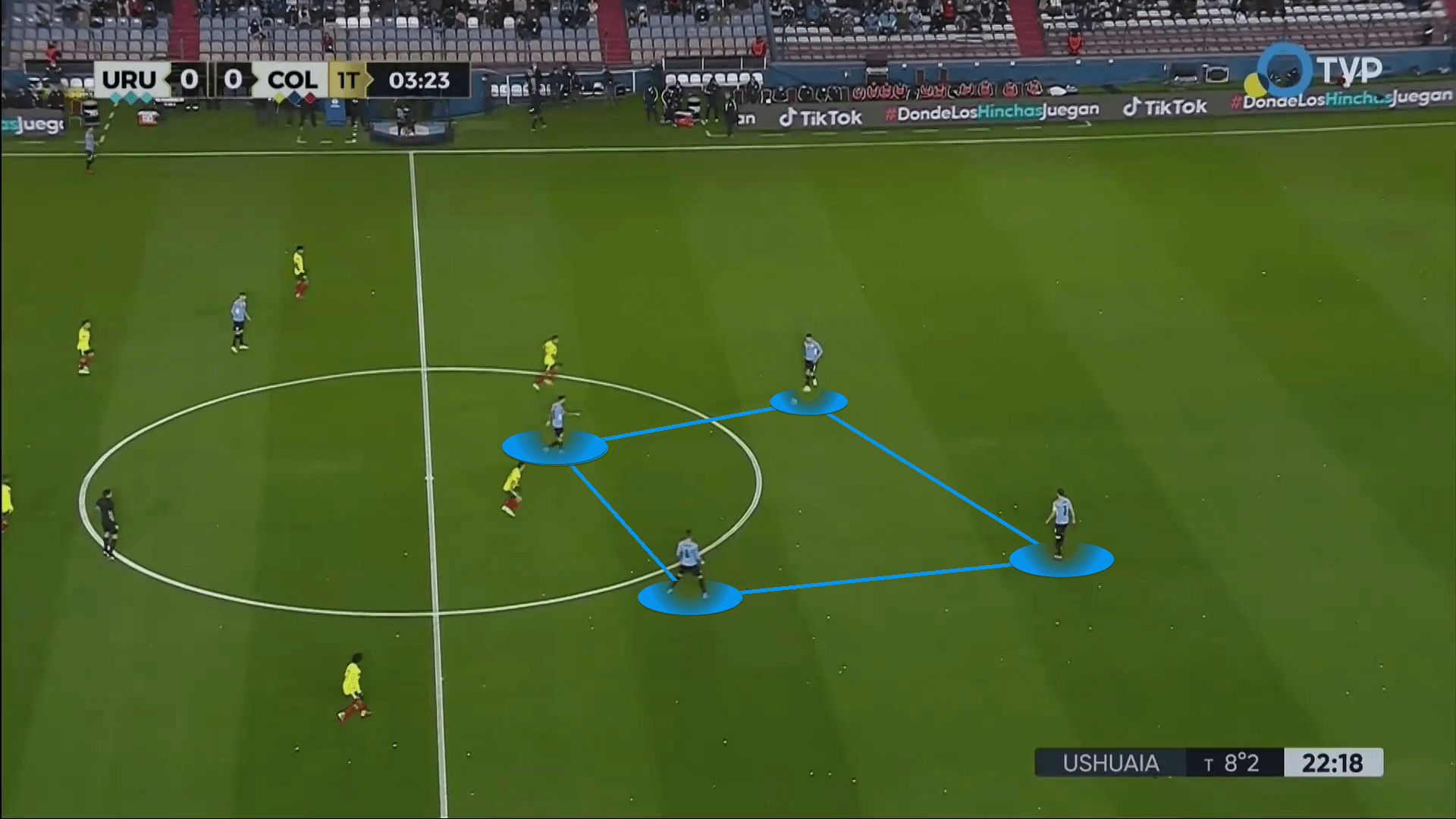 Another aspect that contributed to Uruguay’s dominance in the first half was their passages of play in wide areas. Uruguay were prone to creating wide overloads, especially on the left-hand side where Matias Vina, Rodrigo Bentancur and Brian Rodríguez were positioned. At times, De Arrascaeta and Federico Valverde would vacate the right side of the field and join the players on the opposite side to contribute to the play when the ball was in that area.

This wide overload shifted Colombia’s low-block and as a result of this, created space on the far side, a space that Uruguay took advantage of. Uruguay did well regarding their interplay in tight areas down the wing and then suddenly switching the ball laterally to the opposing flank where right-fullback Nahitan Nández was granted space to create within the final third. This type of play was a common sequence for Uruguay that was quite successful. 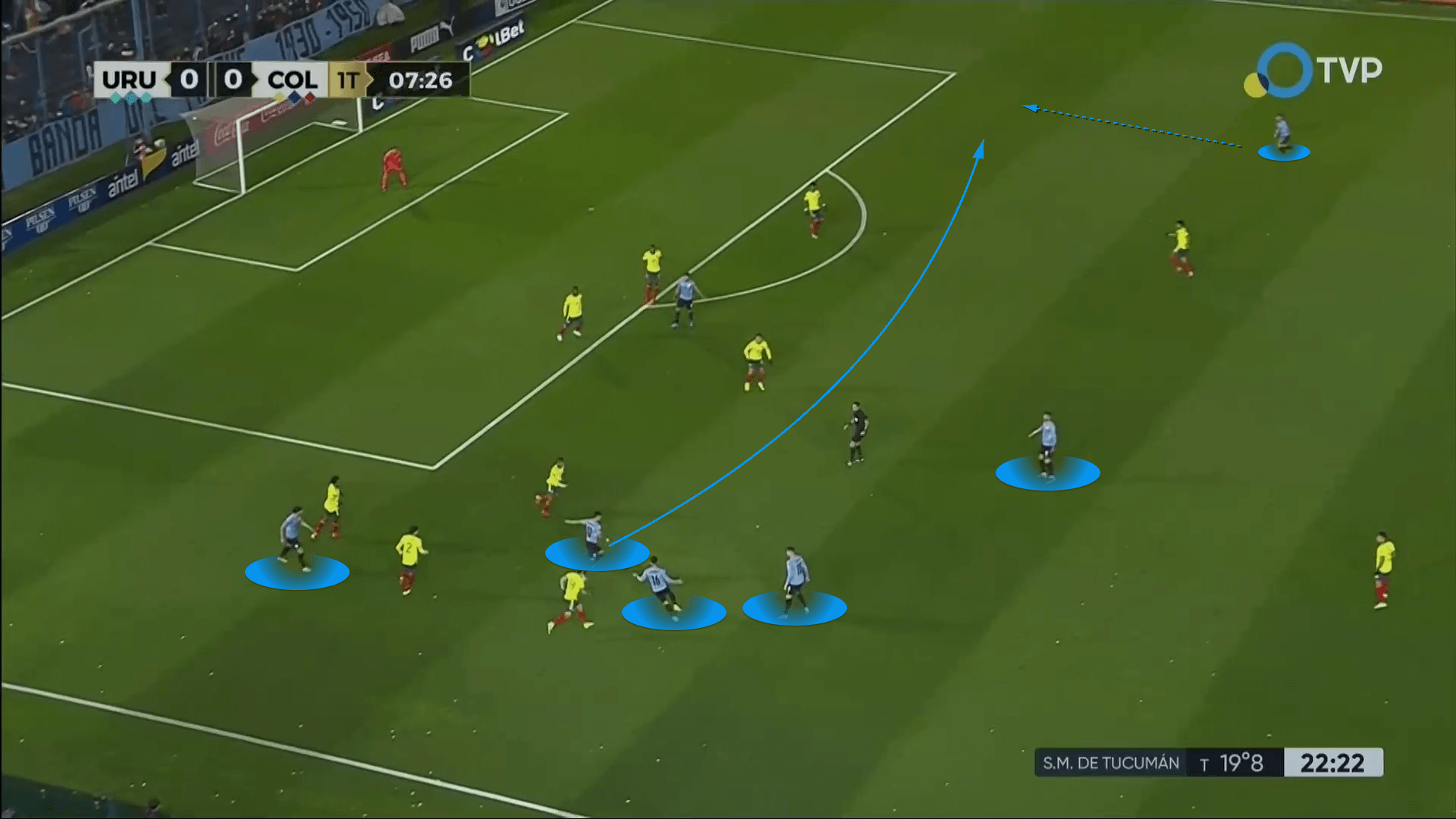 Uruguay will look back fondly on the first half as they asserted their supremacy. On the other hand, Colombia will be disappointed as they failed to offer anything within this period and it was clear to distinguish that their building-up was at the forefront of their issues. Uruguay operated in a 4-3-3 high press with a narrow front three.

These three players were tasked to block central passages into Colombia’s central midfielders and in doing so, Colombia would either play long-balls to their forward line or move the ball wide and progress the ball down those avenues. It is clear to see that Uruguay went into this match with a clear structure regarding how they were going to play during certain passages of play, but the same cannot be said about Colombia.

When trying to progress the ball forward, Colombia was stuck within the first phase and resorted to long passes, the issue within their possession scheme was the lack of dynamic movement off the ball and understanding of space to receive in between the line. Uruguay’s pressing lines were compact and narrow which created space within the half-spaces. These areas were not targeted by Colombia.

Here is a perfect example of the lack of support showcased by Colombia. Johan Mojica was positioned in central midfield and played a pass out wide to Luiz Diaz. As the ball travels towards Diaz, simultaneously he was being simultaneously pressured by two Uruguay players with no supporting players around him to play out. 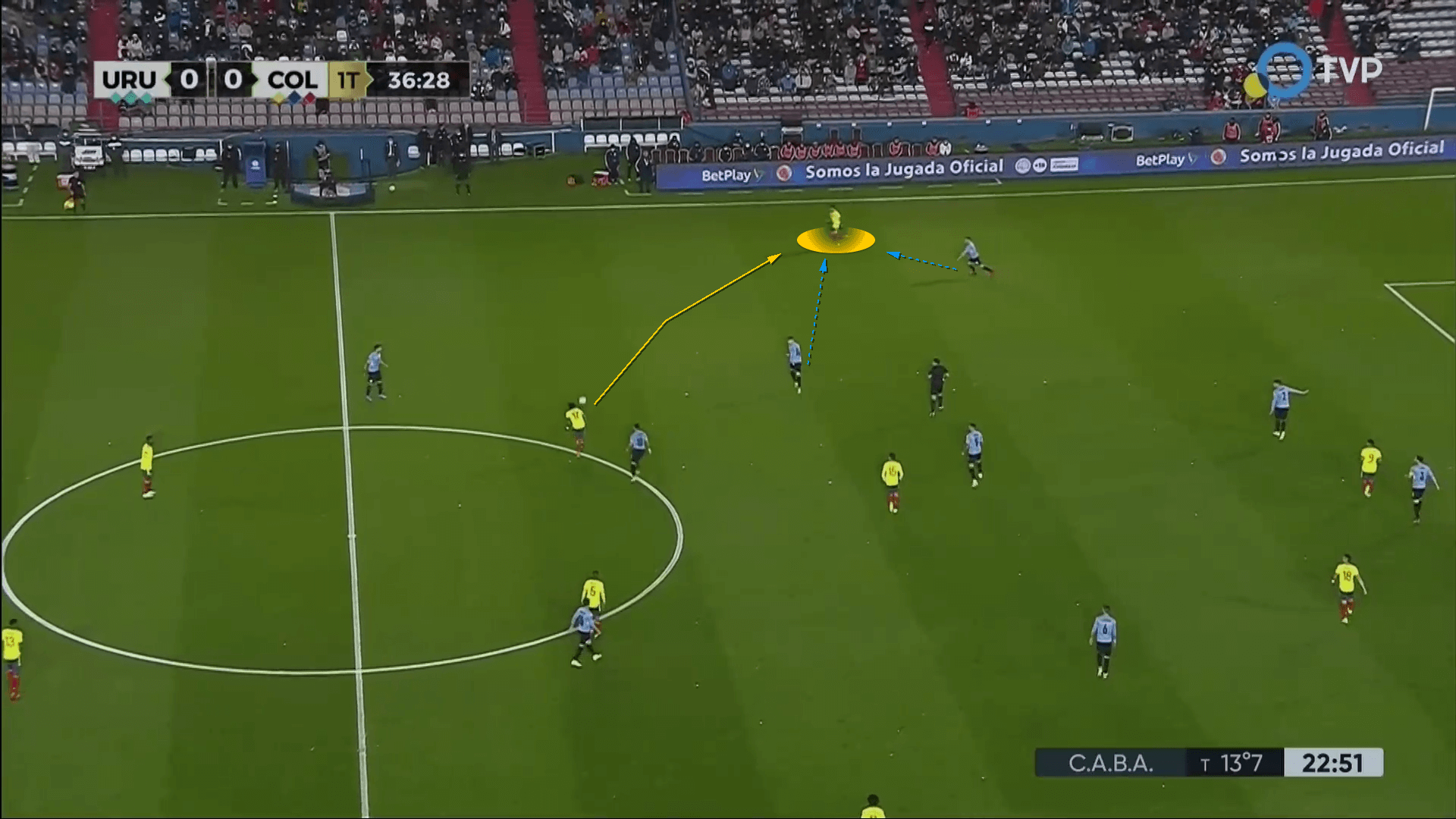 The first half of this match ended 0-0 and Uruguay was most reactive as they made two substitutions at the beginning of the second half. Off came Luis Suarez, De Arrascaeta and Brian Rodriguez and on came, Edinson Cavani, Nicolás de la Cruz and Darwin Núñez. With personal changes came changes that impacted Uruguay’s tactics; their 4-3-3 structure was altered.

During the second half, Edinson Cavani was the main out-and-out striker, playing down the centre and giving the Colombian centre-backs something to think about. Cavani’s positioning allowed Darwin Núñez to drift and pick up position on the left channel. The 4-3-3 shape remained but through Uruguay’s alterations, the formation was quite asymmetric as Nicolás de la Cruz in the half-space and Vina and Valverde offered width on the right-hand side.

Another consequence of the asymmetrical front three was the space created in certain areas. For example, we can see Uruguay’s team shape, with their standard back four and midfield three. What we can also notice is Nicolás de la Cruz’s position as he was much more inverted compared to Darwin Núñez on the opposite side. As Nicolás de la Cruz made this movement inside, the opposition fullback Johan Mojica should have tracked him so De La Cruz does not become a free vertical passing option. This movement also had a knock-on effect as Edinson Cavani was given the opportunity to run into the right side of the pitch. 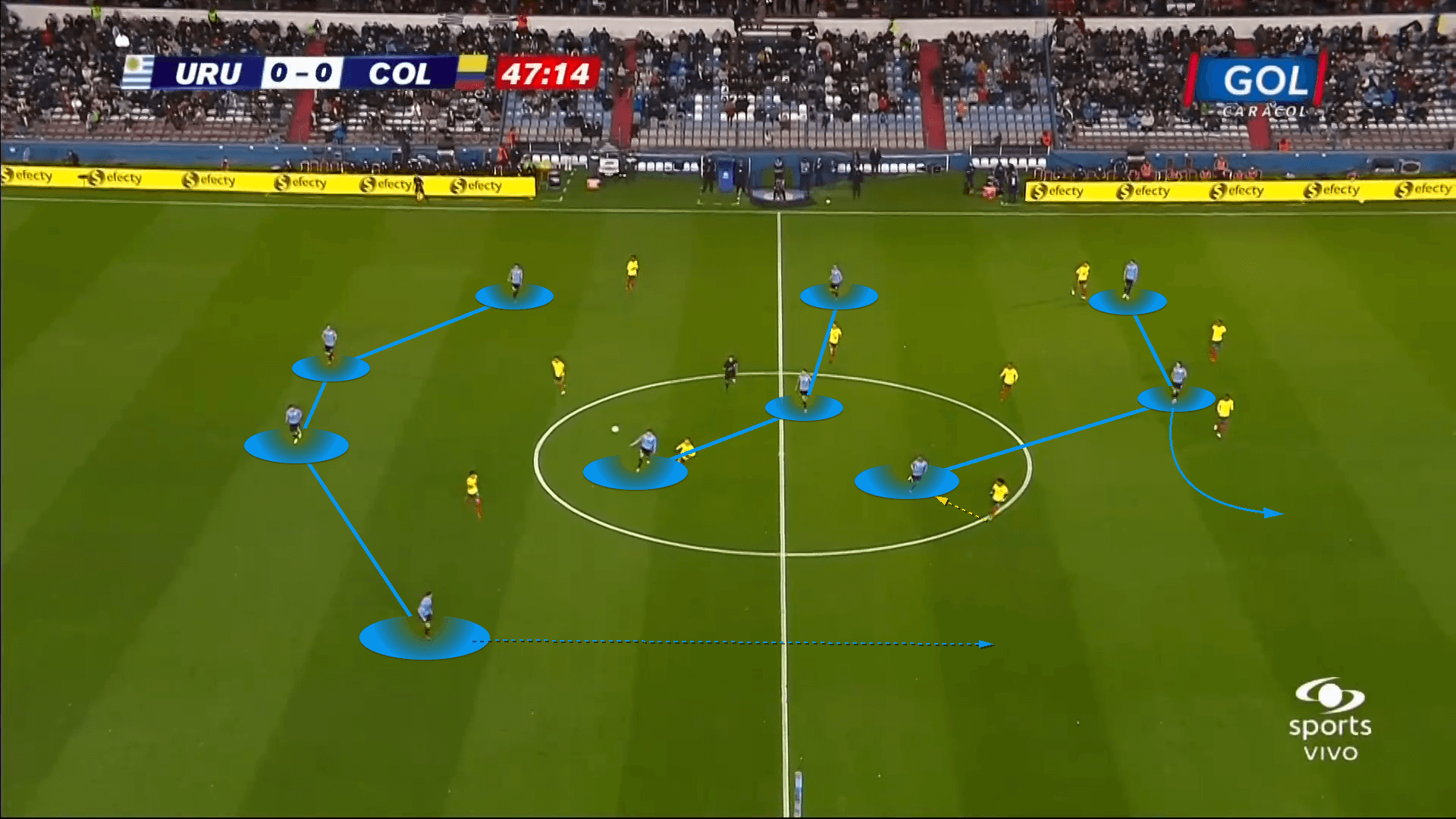 With a game featuring two South American footballing giants, who have been successful in previous competitions across the world and around the continent, most people would have expected a close game. The score-line reflects this sentiment but the events that took place do not match up.

Uruguay were certainly the better outfit as they did well when advancing the ball forward in the build-up and creating favourable situations in wide areas. The only thing missing was the goal which on another day, could have come from both Luis Suárez’s missed opportunities: the first being a top-corner curler that went wide and the second being a marginal offside.

Colombia on the other hand did not impress as their utilised system was quite problematic. The biggest issue was their lack of movement off the ball. One positive that they can take away was that they took a point away from home from tough opponents and live to fight another day. 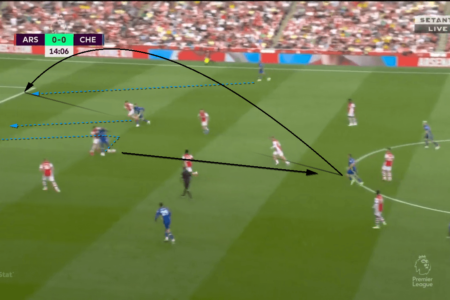 The signing of a £97.5 million striker was supposed to turn Chelsea into a potential Premier League winning side. A […] 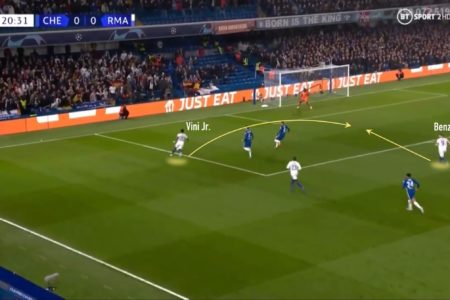 Is there a higher peak in football than scoring the winning goal in a Champions League final? For Vinícius Júnior, it […] 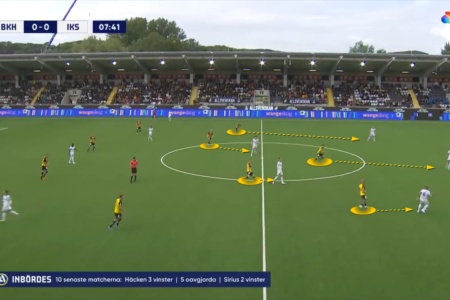