Orlando Pride hosted Portland Thorns in a NWSL fixture last Wednesday and the game ended with an important 2-1 Orlando Pride win that showed the latter’s ability to be harmful upfront even against one of the best performing teams of the NWSL currently. This win will certainly give a boost to Orlando Pride and enable them to approach the next games with more confidence and in the appropriate way to get as more points as possible. While for the visitors, they will have to look at what went wrong for them and fix it quickly to not lose more points in the future and get back to their winning ways.

In this tactical analysis article, we will provide an extensive analysis of both teams’ attacking tactics to explore how Orlando Pride were more effective in this regard and why Portland Thorns were not able to equalise or turn the table on their opponents, while looking at some individual performances that stood out in this match.

Orlando Pride started the game with the 4-2-3-1 formation with Ashlyn Harris as a goalkeeper, Ali Riley, Ali Krieger, Phoebe McClernon and Courtney Petersen in defence, Gunnhildur Jónsdóttir and Meggie Dougherty as central midfielders with Marta and Sydney Leroux as wingers and Taylor Kornieck as a second striker behind Alex Morgan, the team’s striker. 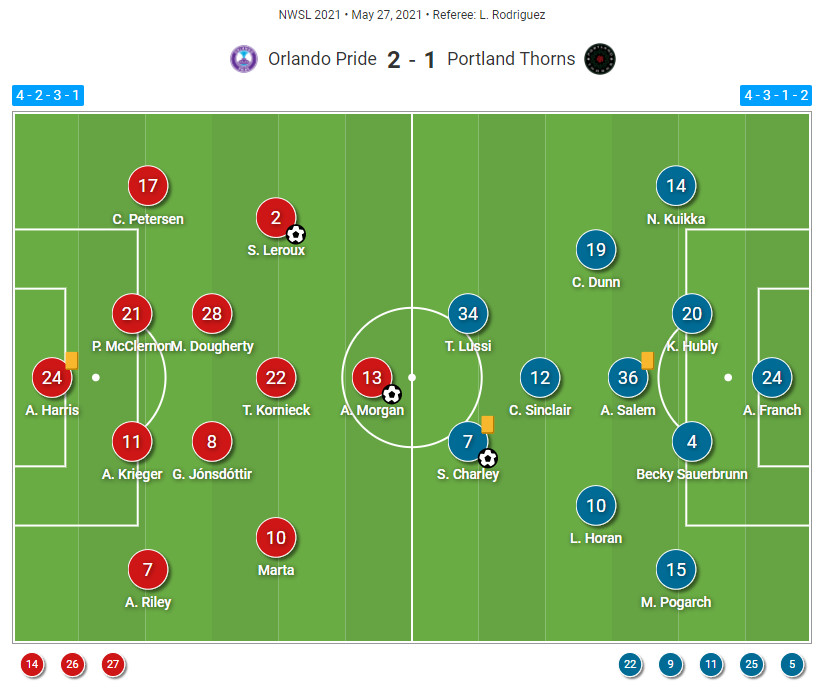 Portland Thorns were dominant team in the first part of the match and were more dangerous upfront by relying on high pressing and attacking with numbers as soon as get possession. They also tried to alternate between crosses from both wings at times, short passes towards the box and specifically from Sinclair to one of Charley and Lussi while in some other instances Portland Thorns’ midfielders aimed at surprising Orlando’s defensive line by launching long-passes at the back of defence to one of the strikers. These chances were well-executed however the finishing touch lacked Portland Thorns in most of these cases and that’s what gave Orlando the chance to believe in their chances after they were conceding a considerable number of chances. 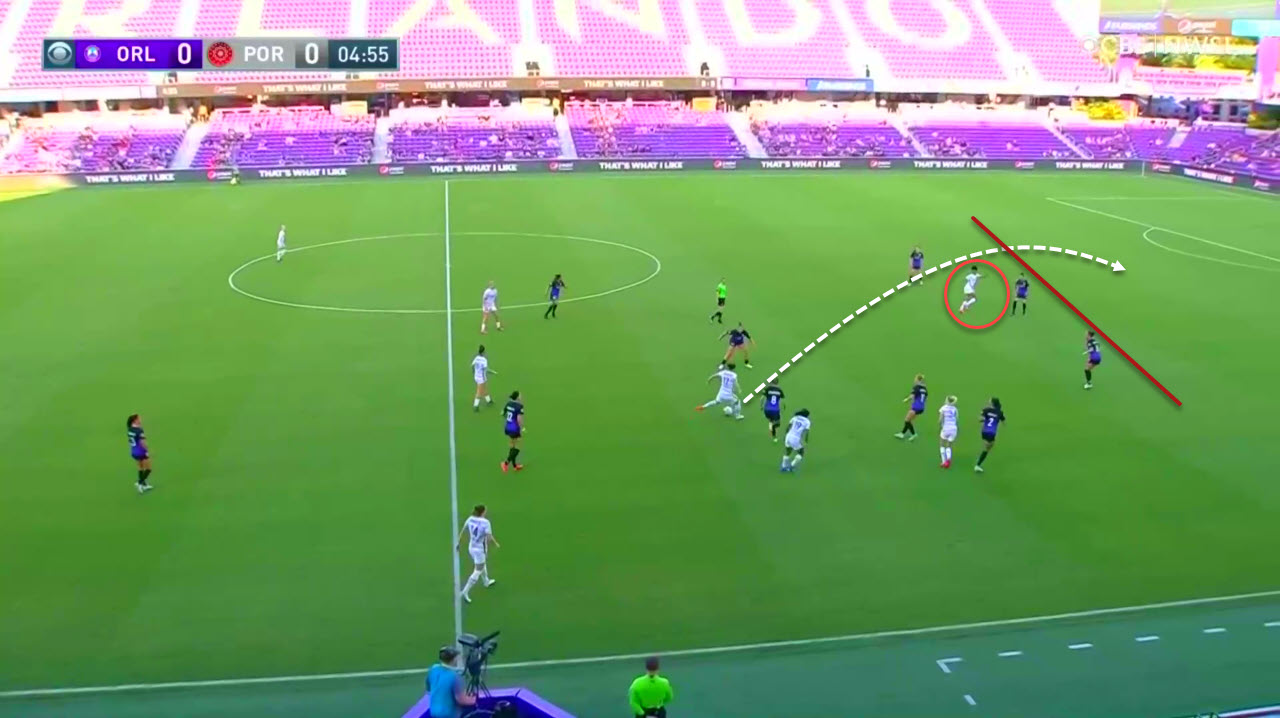 As you can see above, such long passes towards strikers were very dangerous and could have resulted in goals if the players focused more on this type of attacking actions. Yet, Portland Thorns relied more on exchanging passes in the final third and waiting to find individual solutions against a compact defence which is already attentive to all Portland’s attacking movements. And this made Portland’s mission a bit complicated since Orlando’s marking was usually on time to avoid dangerous penetrations and not allow shooting opportunities.

As a result, Portland players resorted to shots from distance since they knew that it was difficult to break the defence easily so they opted for long range attempts as Sinclair did in this picture. However, her shooting attempt was not as accurate as needed. 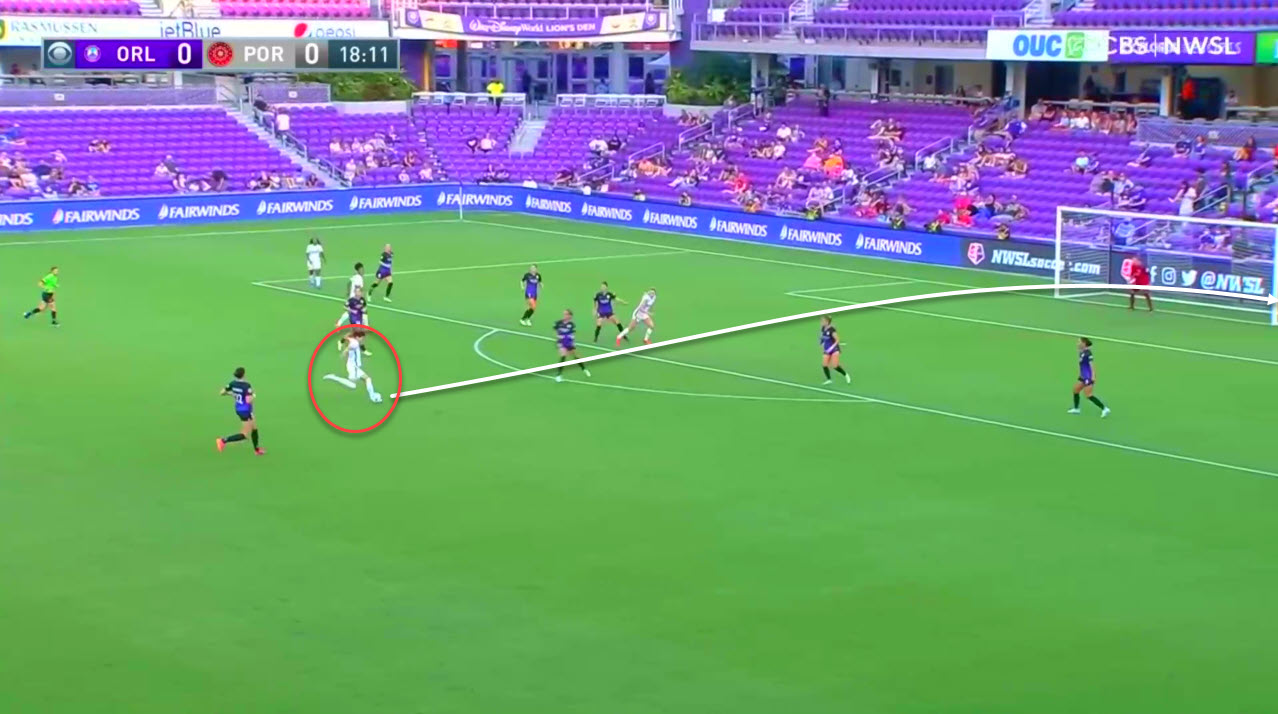 Nevertheless, relying on crosses from both wings was fruitful for Portland in one occasion even though most of the other crosses were intercepted by Orlando’s defence. But at the 42th minute, Kuikka’s cross towards the box was well-executed and Charley’s header was well-timed to put the ball inside the net while beating her direct opponent, Riley. 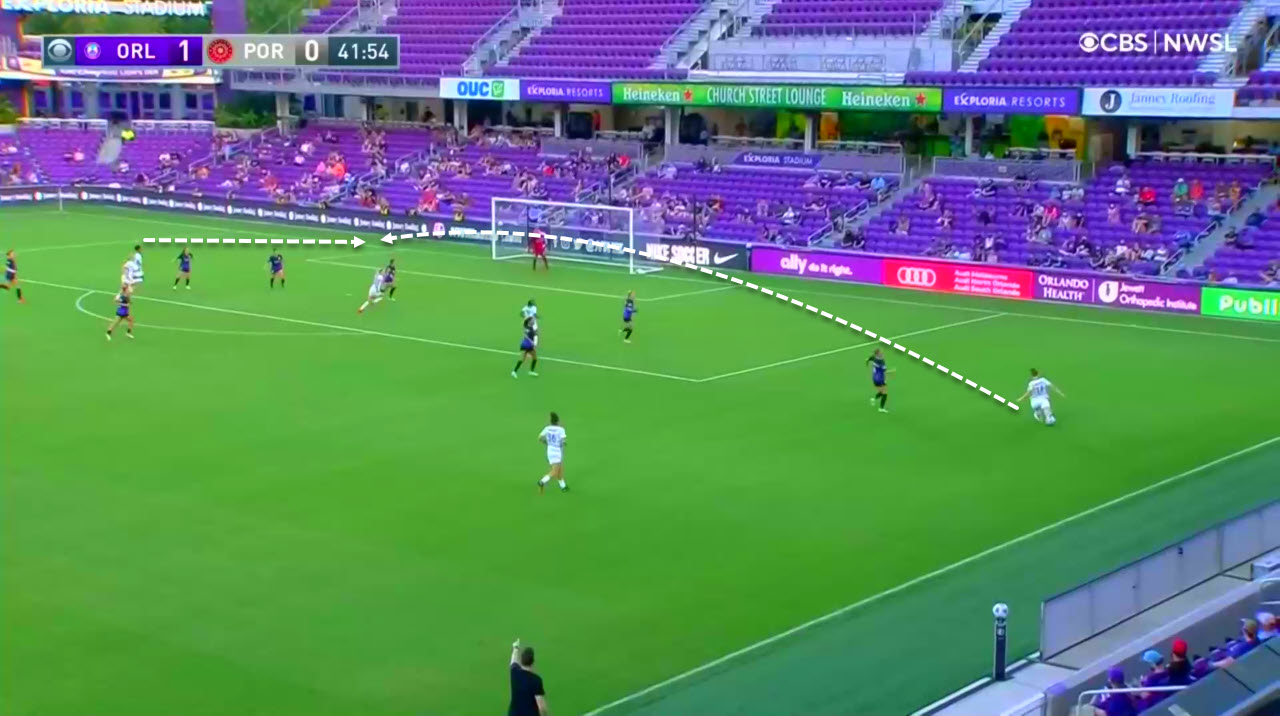 The goal however wasn’t enough for Portland Thorns as Orlando Pride added a second goal and Portland were not able to find space behind Orlando’s organised defence and they ran out of effective attacking ideas to break that defence.

Even though Orlando Pride conceded a lot of chances in the first part of the first-half, they soon countered their opponent’s attempts with a goal and numerous chances that followed. They relied on keeping Portland’s defence wide by keeping Marta and Leroux on the wings to create danger mainly through crosses.

And at the same time, both Kornieck and Morgan had the freedom to lean towards the right and the left to receive and make some passing combinations with one of Marta and Leroux. This off the ball movement creativity allowed Orlando to create space out of nowhere and confuse Portland’s defence several times since Morgan was not playing as a classic nine who just waits inside the box and Kornieck was also very dynamic and exchanged positions with Morgan especially during crosses to exploit her physical abilities, like you can see in this example. 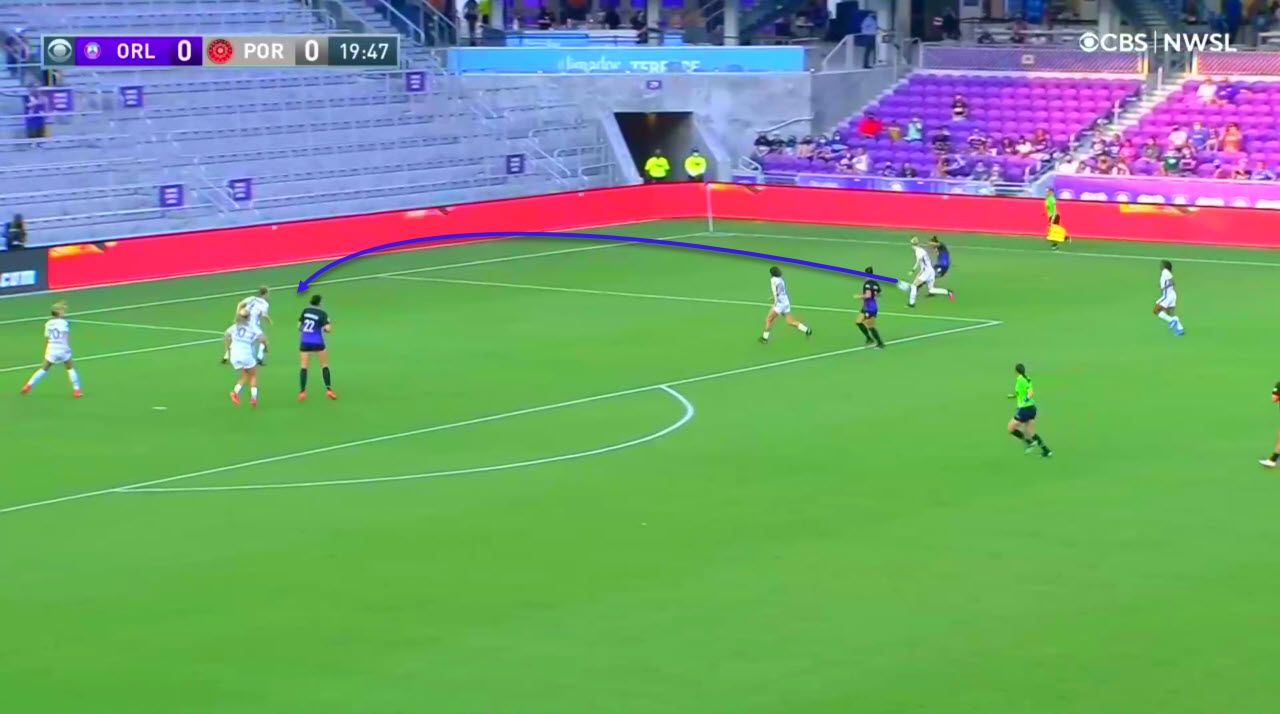 Moreover, Morgan’s movements and chemistry especially with Kornieck added a lot to Orlando’s attacks and made the mission more difficult for Portland’s defence since it was complicated for them to predict both players’ movements, intentions and passes. This was clear during Orlando’s first goal action when Kornieck saw Morgan’s movement and immediately gave her an accurate long-pass to gain some seconds over the defenders. Then, Morgan’s experience played a big role since she covered the ball with her body and let it bounce before kicking it accurately towards the far post to score a beautiful goal. 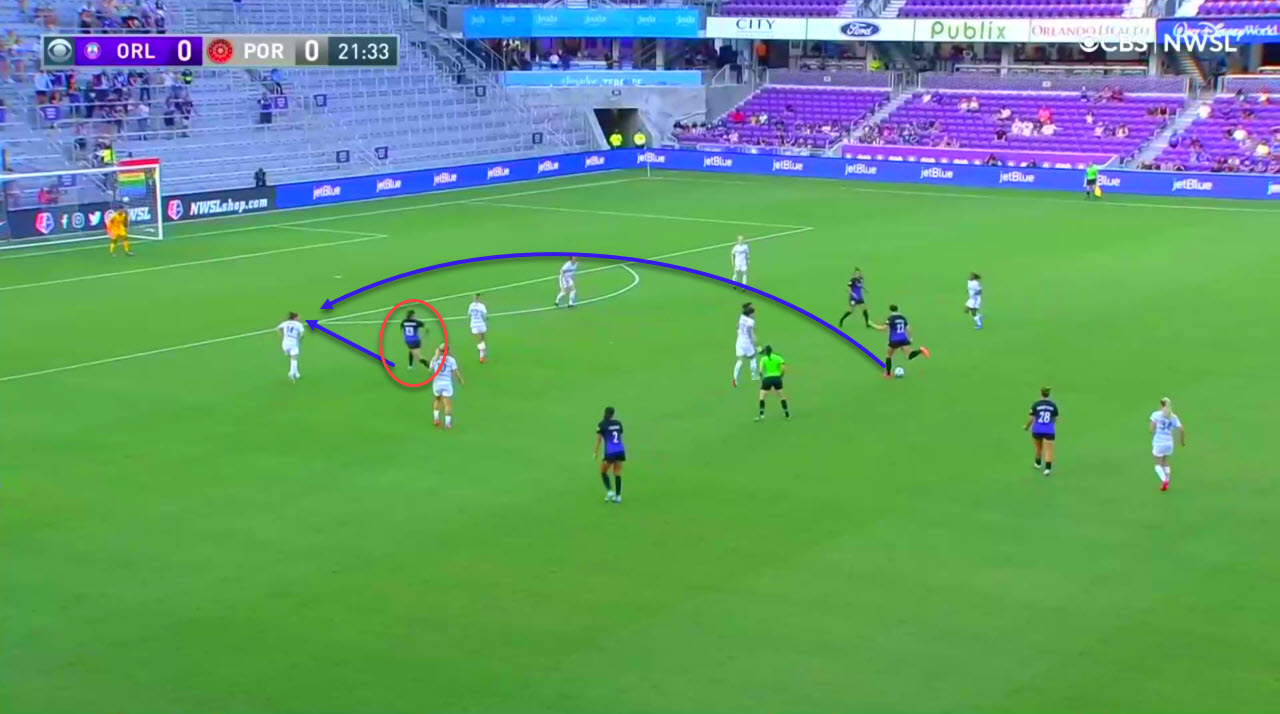 Leroux’s goalscoring instinct and effective pressing played a big role in adding the second goal for her team at the start of the second-half by exploiting Portland’s huge defensive mistake and indecision and stealing the ball from Hubly with a sliding tackle to put her team ahead on the scoresheet. 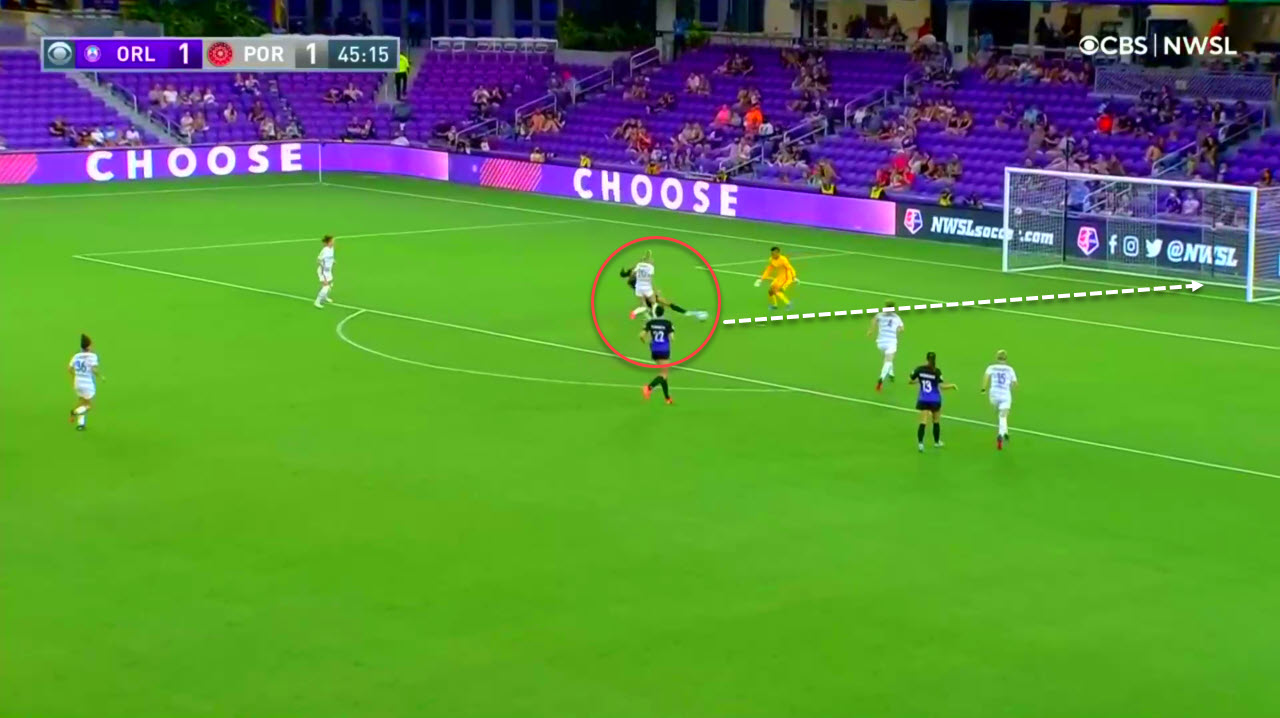 Following this goal, Orlando Pride preferred to retreat and avoid conceeding goals while at the same they tried to keep hold of the ball and advance as more as possible to prevent Portland from having possession and threatening to score. Orlando were successful in their plan and they were able to finish the game 2-1 thanks to their defensive compactness and more importantly thanks to their excellent and tangible attacking actions.

Alex Morgan’s experience in the NWSL and in the FAWSL, even though she did not play for teams who played UWCL like Chelsea, Arsenal or Manchester City, played a big role in improving Orlando Pride’s attacking efficiency and the existence of some other talented players like Kornieck and Leroux as well as the experience of Marta enabled Orlando to be confident in their abilities to score against any NWSL team. This was clear in this match against Portland Thorns however, much more work is needed for them to be more clinical upfront and to create more chances in the future.

For Portland Thorns however, they started the game in a good way but as soon as they failed to find clear intervals, they gave up and resorted only to crosses and had some desperate attempts from time to time. Therefore, much more work is needed to find attacking alternatives when they face teams who defend well like Orlando Pride and to know how to break such defences and score goals despite the tight marking.