The 2020-21 EFL Championship playoffs final saw Brentford play against Swansea City at Wembley as both teams were aiming to get themselves promoted. This was Brentford’s second successive appearance in a playoff final after losing out to local rivals Fulham in the extra time last year. Swansea on the other hand, despite starting the season well and in a good position to earn direct promotion, faltered after the turn of the year and slipped to the 4th position in the league. Both the teams will be looking to get back to the top-level especially Brentford whose last appearance came 74 years ago and will be looking to be the latest club from London to play in the Premier League era after the likes of Crystal Palace, West Ham, Fulham, Chelsea, etc.

This tactical analysis will discuss the tactics of both the teams and how Brentford managed to notch up a win to earn a promotion. Let’s begin the analysis.

Brentford went with the same lineup that beat Bournemouth 3-1 last weekend despite some rumours that Norgaard would make his return into the lineup. Eventually, Thomas Frank decided to go with the same team and ensure the momentum is not broken. 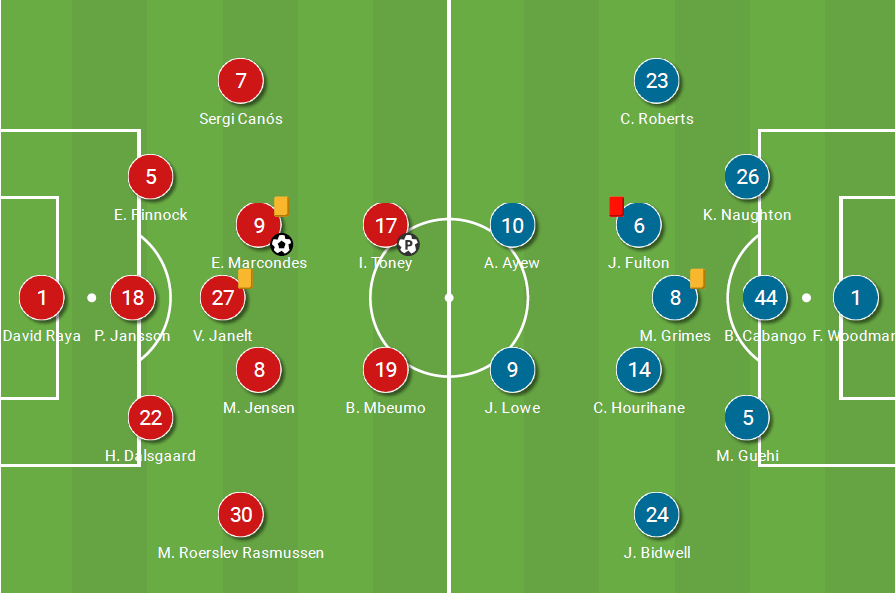 Brentford benefited from their intense start

Right from the beginning, it was clear that Brentford were much more determined and had a hunger for promotion. Thomas Frank’s side have been one of the best pressing units in the Championship and they continued with the same trend. Setting up in their 3-5-2 similar to Conte’s Inter Milan, Brentford had a clear plan and pressing triggers that they wanted to implement to win the ball high up the pitch. Even though Swansea surprised with a change of system and went with a three-man defence, Brentford were flexible to implement their press. Their forwards would initially look to block the passing lanes to the midfield and not jump right out to press since Swansea held a 3v2 advantage. When one of the wide centre-backs carried the ball or passed it to the wing-backs, the triggers would start and Brentford would align themselves in a man-man approach to win the ball back immediately. We can see an example of their intense pressing in the flanks where they have created a 4v4 situation against the Swansea players and have compressed the options for the ball carrier.

Usually, when Swansea’s captain Grimes dropped, Marcondes followed him up top and their formation would become a 3-4-1-2 higher up the pitch. It was very flexible and immediately shifted to a 3-5-2 when they went with a mid-low block defending. The marking out Grimes in the initial 20 minutes proved to be very vital for Brentford as his absence on the ball meant, Swansea were struggling to find some sort of progression. We can see how Brentford have man-marked both the Swansea midfielders who have dropped in the image below. 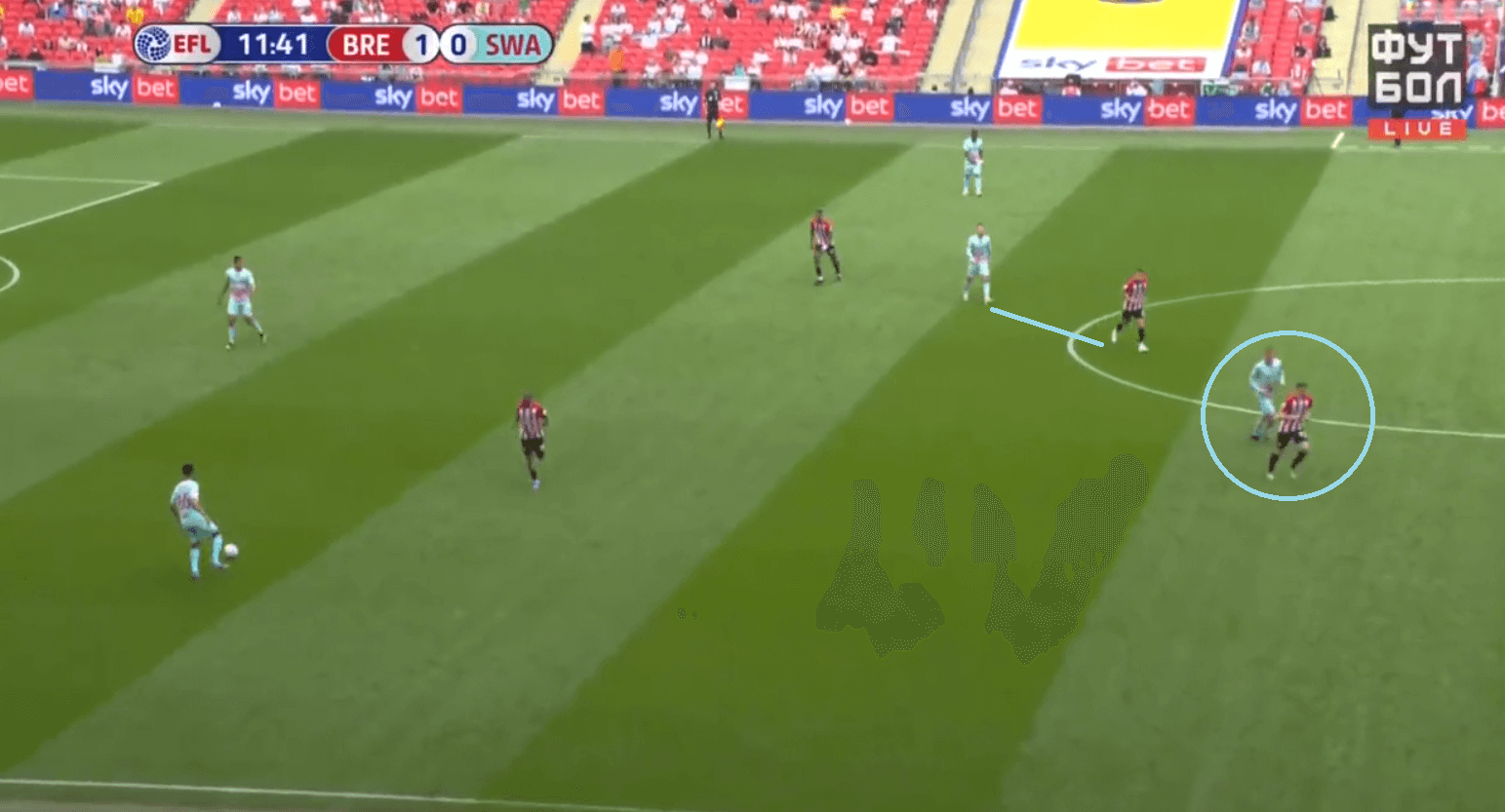 Even in their mid-block, Brentford got their positioning and angles right and made it very difficult for Swansea to play a pass. We can see Grimes having the ball but his options are limited to pass forward as Swansea haven’t staggered well in between the lines and also the only viable options to him is out wide. But we can see Mbeumo’s positioning in a right angle as he blocks a proper pass to one of the players out there. Grimes eventually loses the ball with a misplaced pass. 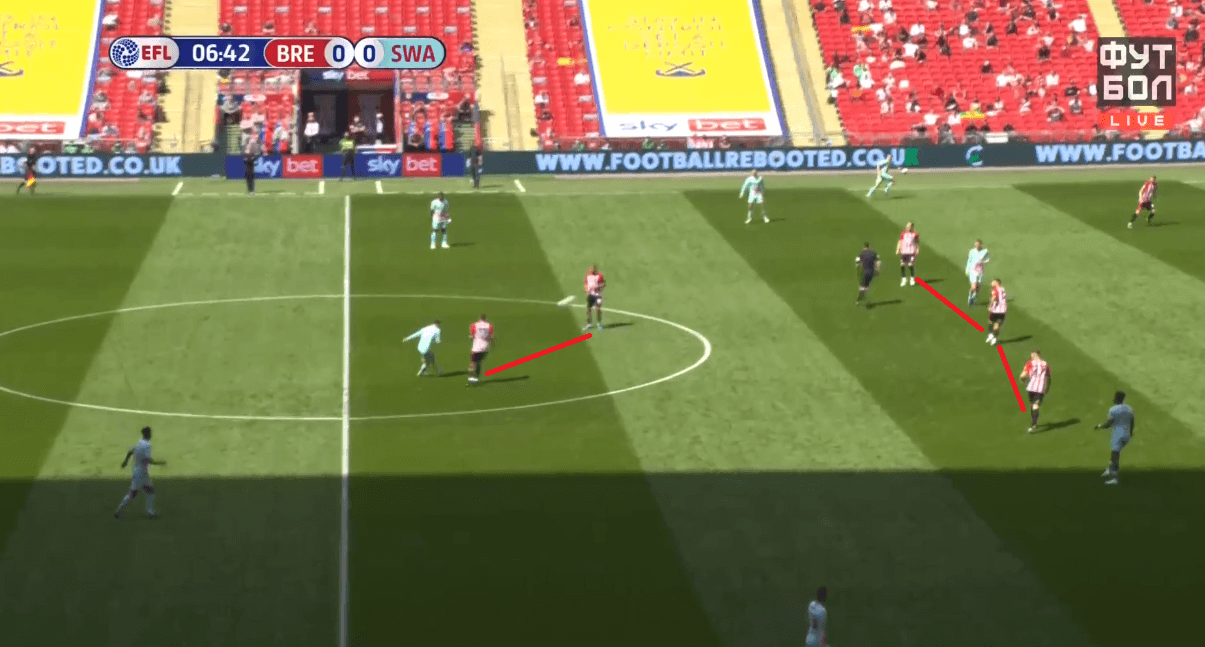 Their attacking tactics were much more brilliant than their defensive tactics as they tore apart Brentford in the first 20 minutes. Their three centre-backs stretched themselves very wide to make it very difficult for the Swansea forwards to press and be close to each other if they were to win the ball back. We can see in the image below where Brentford’s centre-backs are spread in large distances from each other and the two Swansea forwards find it difficult to press them while also blocking the passing lanes forward. 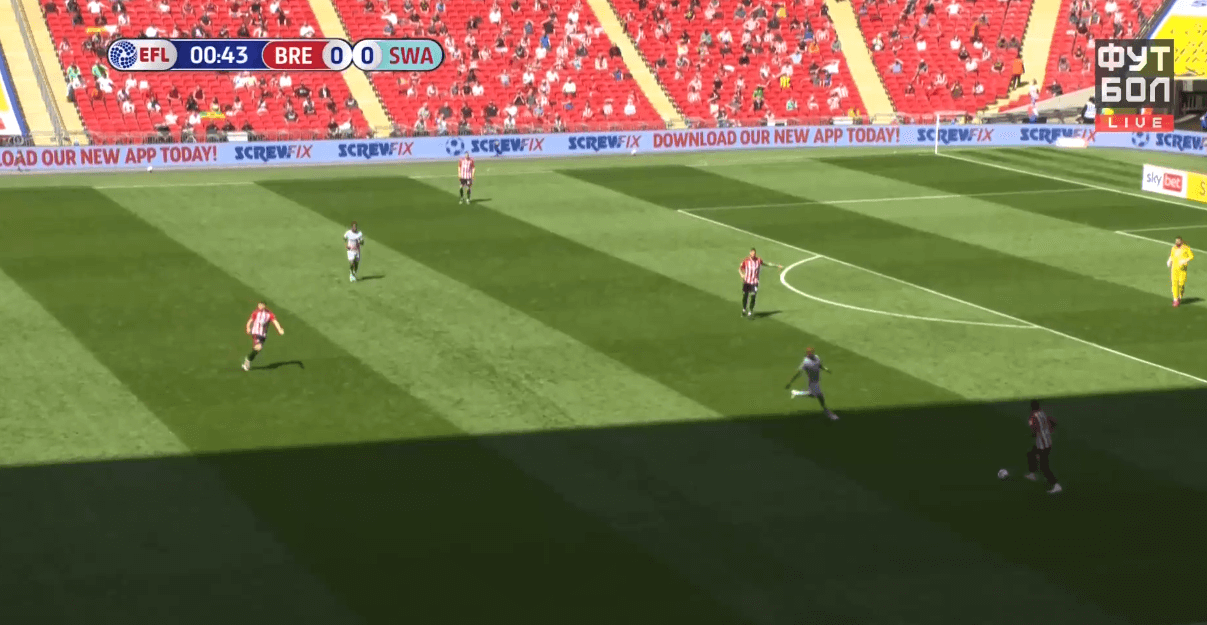 Their main strategy on the day was to drag their midfielders out of their position by manipulating them with neat movements off the ball. They specifically targeted Grimes, who was their deepest midfielder and him being out of position meant that the CBs were exposed with spaces in front of them for Brentford to attack. We can see an example of that in the image below where Grimes has been dragged out of position and that has opened the space for Marcondes to make a run into. 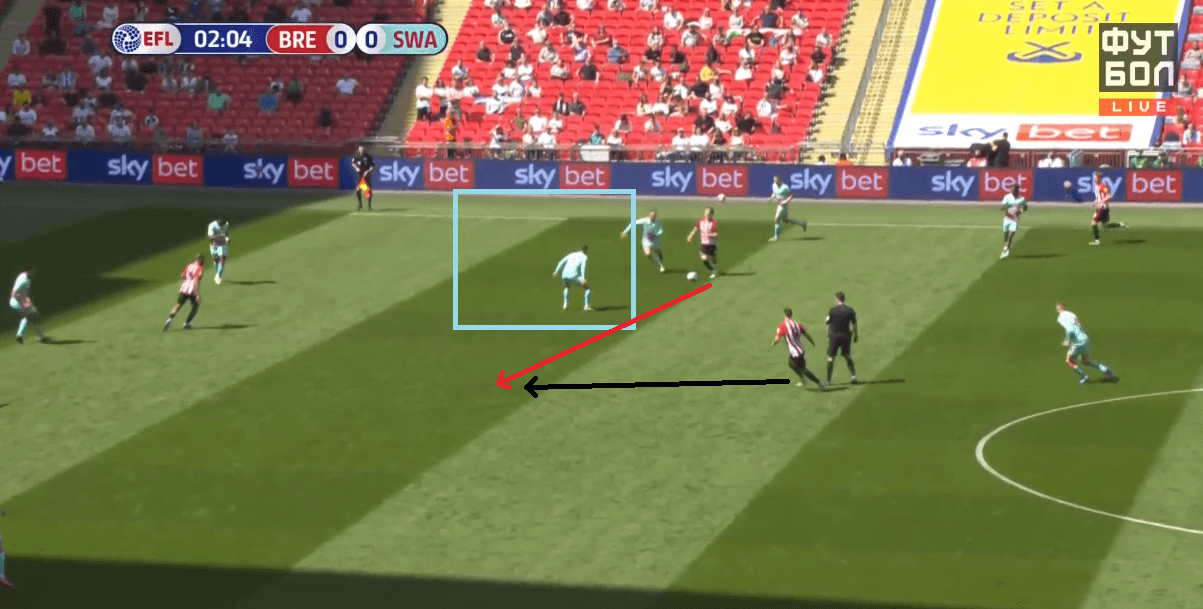 In fact, their opening goal came from a similar fashion where the Brentford midfielders dragged their Swansea counterparts around to open gaps in the midfield. In the example below, Janelt first drags Fulton higher up the pitch. Then Jensen on the far-side dropped as a quarterback to drag Hourihane with him. This left Marcondes in acres of space on the left half-space. And with the Swansea wing-backs already pinned by the Brentford wing-backs, Grimes had to leave his position, from the centre, to follow Marcondes. The latter then played the ball to Canos who drifted inside to occupy the central space and thread a through-ball to Mbeumo, who won the penalty. 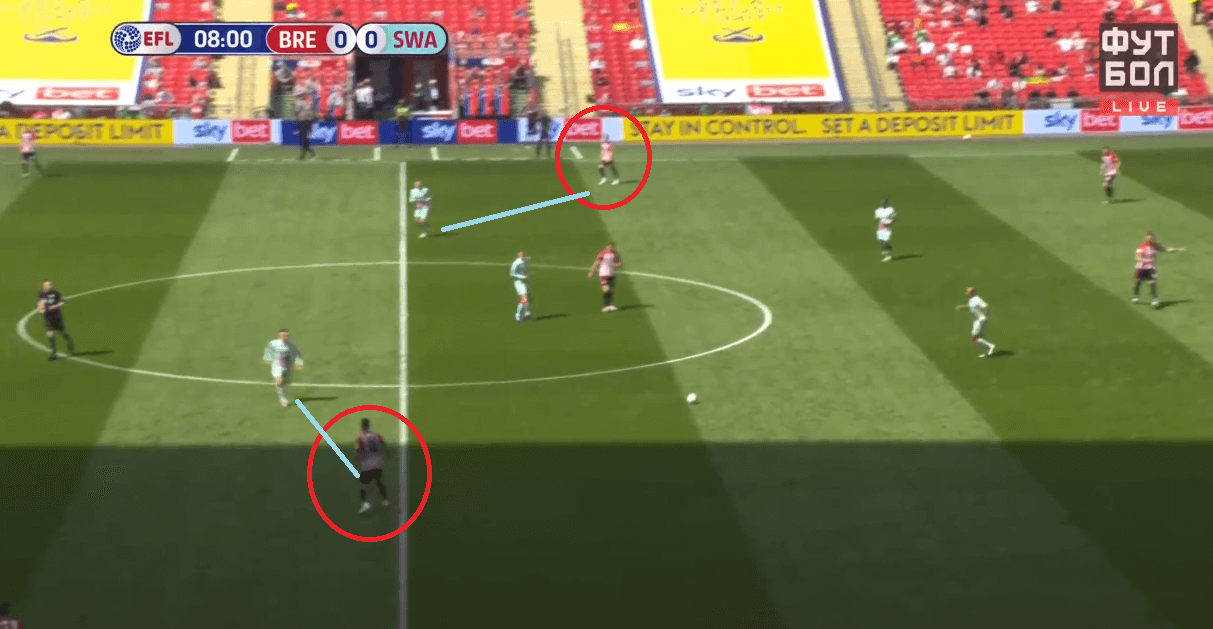 Brentford were also not afraid to go long and vertical when the opportunity arose. Their CBs would step forward often since they were given the freedom to push forward due to their 3v2 advantage over Swansea’s frontline. Then the CBs would launch a long ball to one of the forwards as they looked to stretch the Swansea backline vertically by opening up spaces in front of them. An example of such a scenario can be seen in the image below. 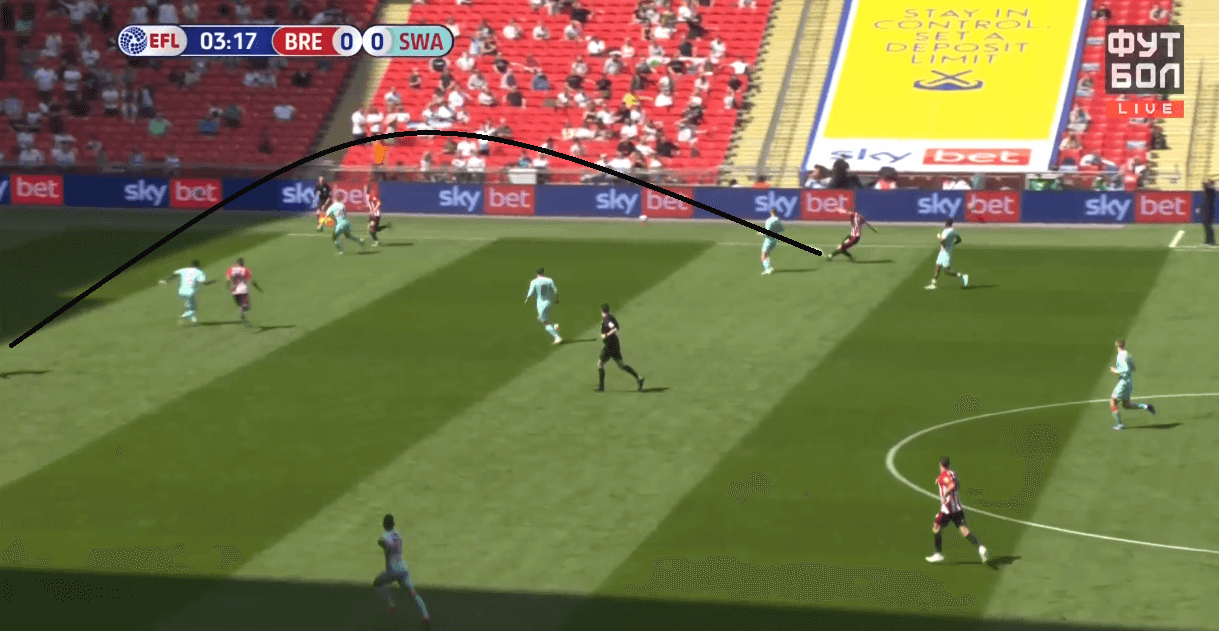 Another reason why they were insistent on going long was because of the gap that Swansea left in between their defensive and midfield line. With the presence of Toney and Mbeumo, they didn’t want to play a very high line against them. When the midfield line pushed forward and was baited to press, the backline didn’t follow them to ensure they remain deep and protect the spaces behind them. But this obviously opened gaps in front of them and one of Mbeumo or Toney dropped into that space to collect the second ball after the long ball. An example of this can be seen in the image below. 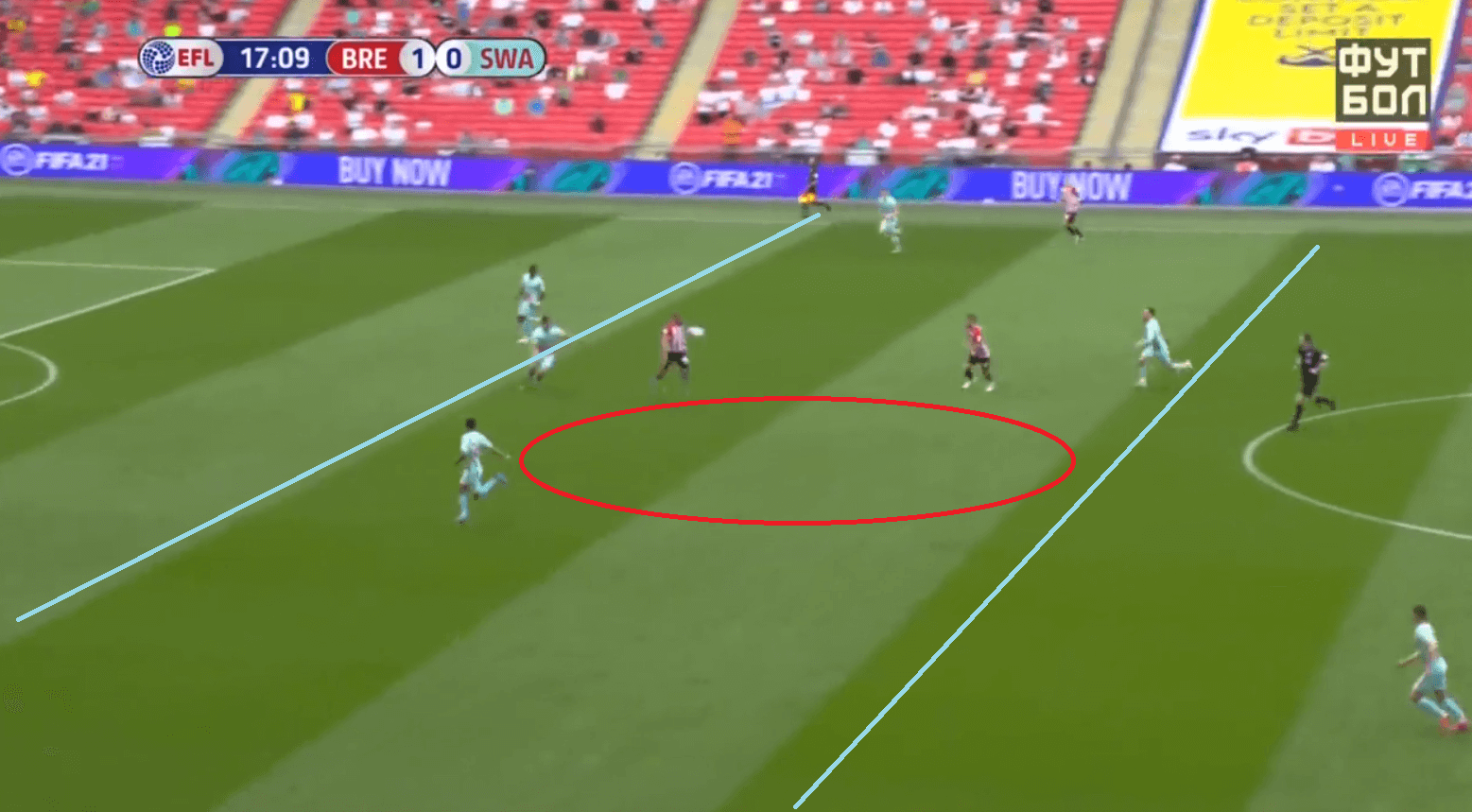 Steve Cooper strung a surprise at the start of the game with his change in tactics for the game. Swansea, having used the 4-3-3 / 4-3-1-2 recently, went with a three-man backline with Naughton starting as a 3rd CB in possession and Roberts playing as a wing-back on the right side. Unlike their opponents, Swansea didn’t follow some important principles that are required to make the system function well. The first one was their positioning of the CBs. Either they were positioned very close with respect to each other or they were very flat with their positioning that made the angles of passing very constrained for each player like in the image below. 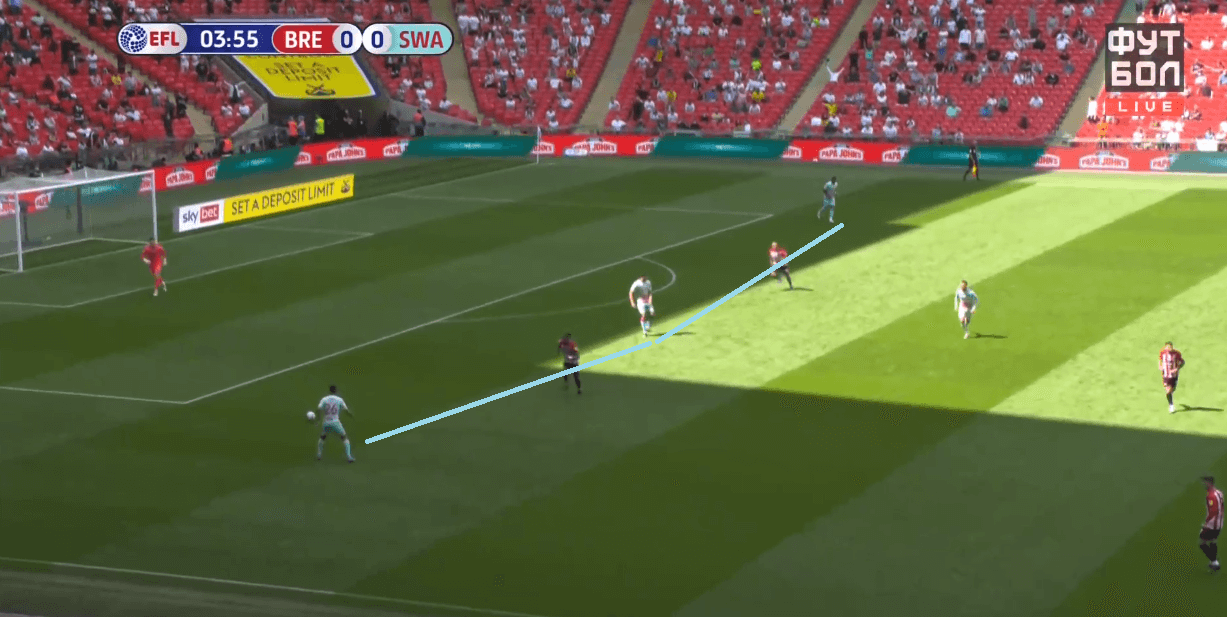 With a 3-4-1-2 shape, they weren’t able to form adequate triangles in the pitch with their players and it formed issues as they weren’t able to find the right players. We can see that issue here in the image below where they have overloaded 5 players vs Brentford’s 4 on the right flank but the ball carrier is not able to access any one of them due to Brentford covering the passing lanes well while the Swansea players themselves are not staggered well and are very close to each other. 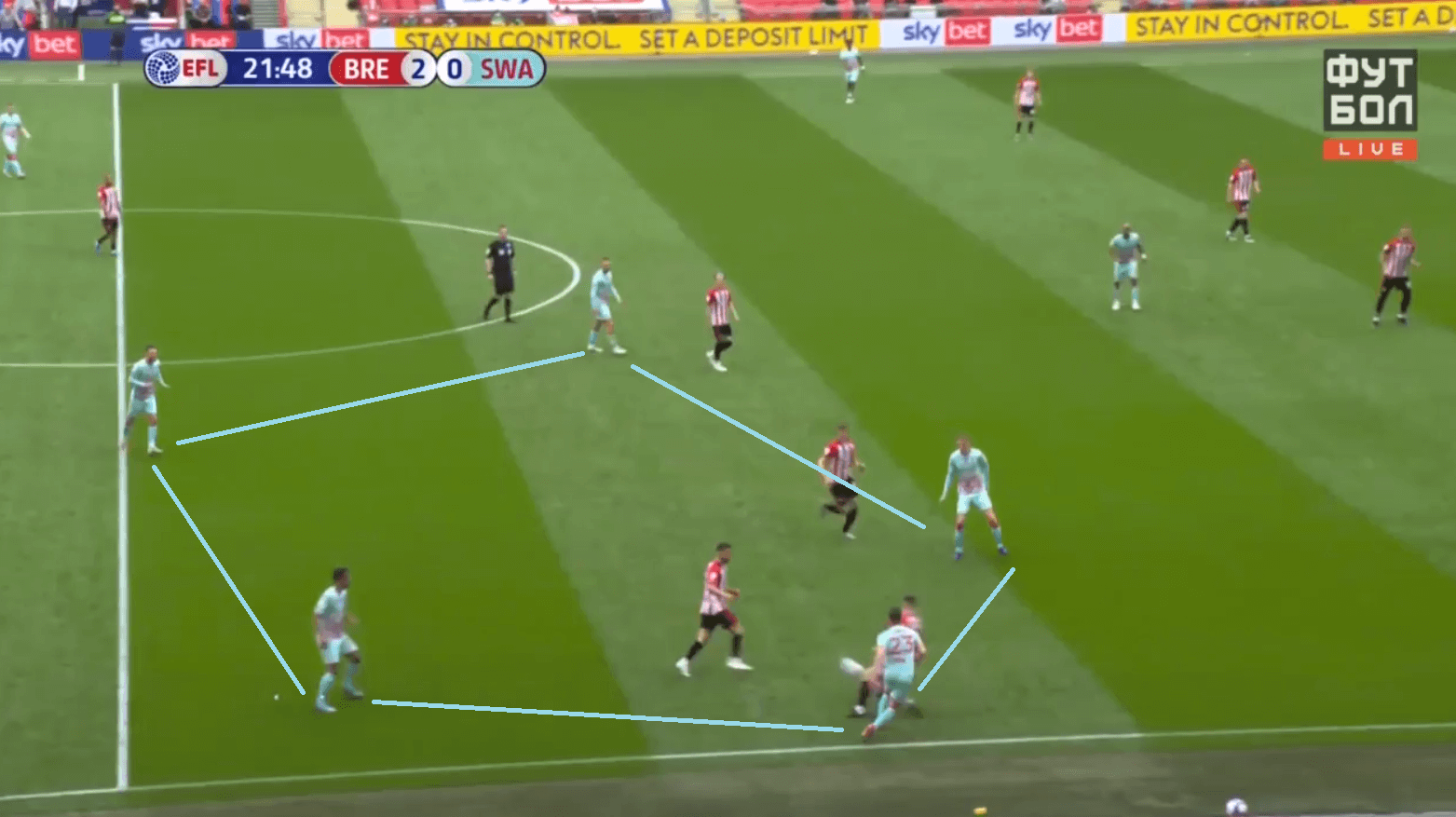 The wing-backs on either side looked isolated and weren’t able to get much involved in the initial 20 minutes in which Swansea didn’t manage to even take a shot whereas Brentford were able to have 2 goals from 4 shots. Even without possession their structure was fallible and had issues. The lack of intensity from the players also meant that Brentford were easily able to shift the ball around and play out comfortably. In the example, we can see Lowe and Ayew looking to press the CBs but their positioning is wrong when they are pressing. Ayew should have been closing down the central CB while pressing the wide centre-back having the ball while Lowe should be showing much more intensity. Only Fulton is at the right position marking Janelt while Marcondes has also dropped with none of the Swansea players marking him or covering him. The passing lane to him is easily accessible and Brentford can go forward. 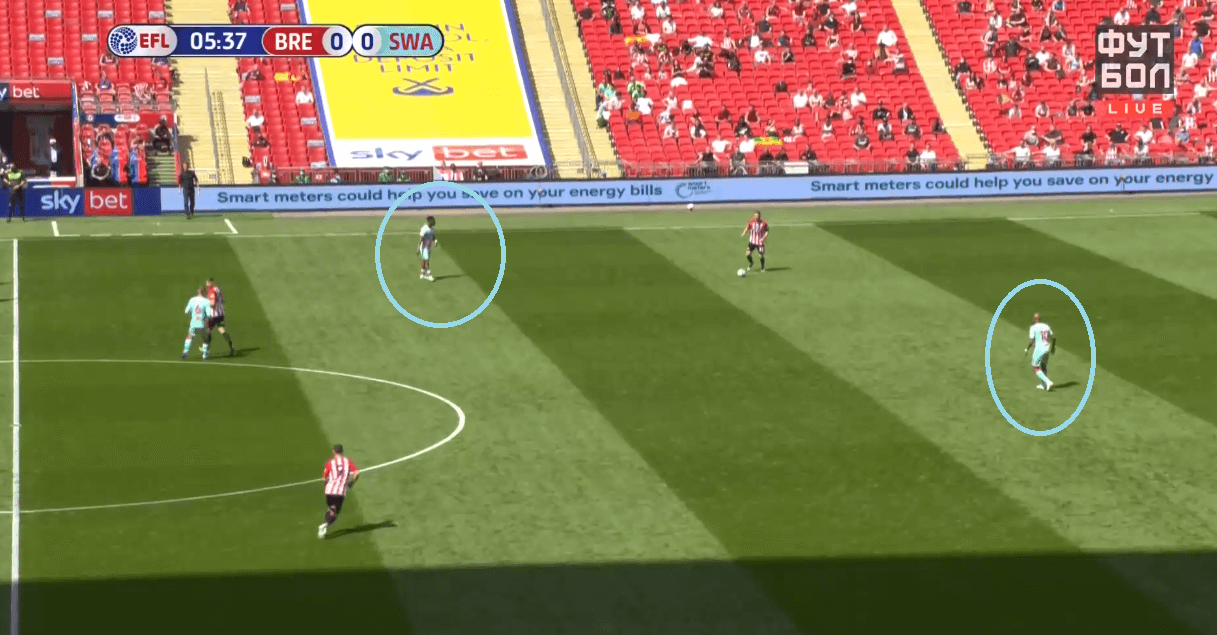 After the 2nd goal in which their lack of structure again was torn apart by Brentford on the counter, Cooper decided to change the shape from 3-4-3 to a 4-2-3-1 system by pushing Naughton to the right-back position and Roberts as a wide-midfield. The four defenders were enough to handle 2 Brentford forwards while the presence of an extra player in the wide midfield gave them good central coverage. We can see their shape in the image below. 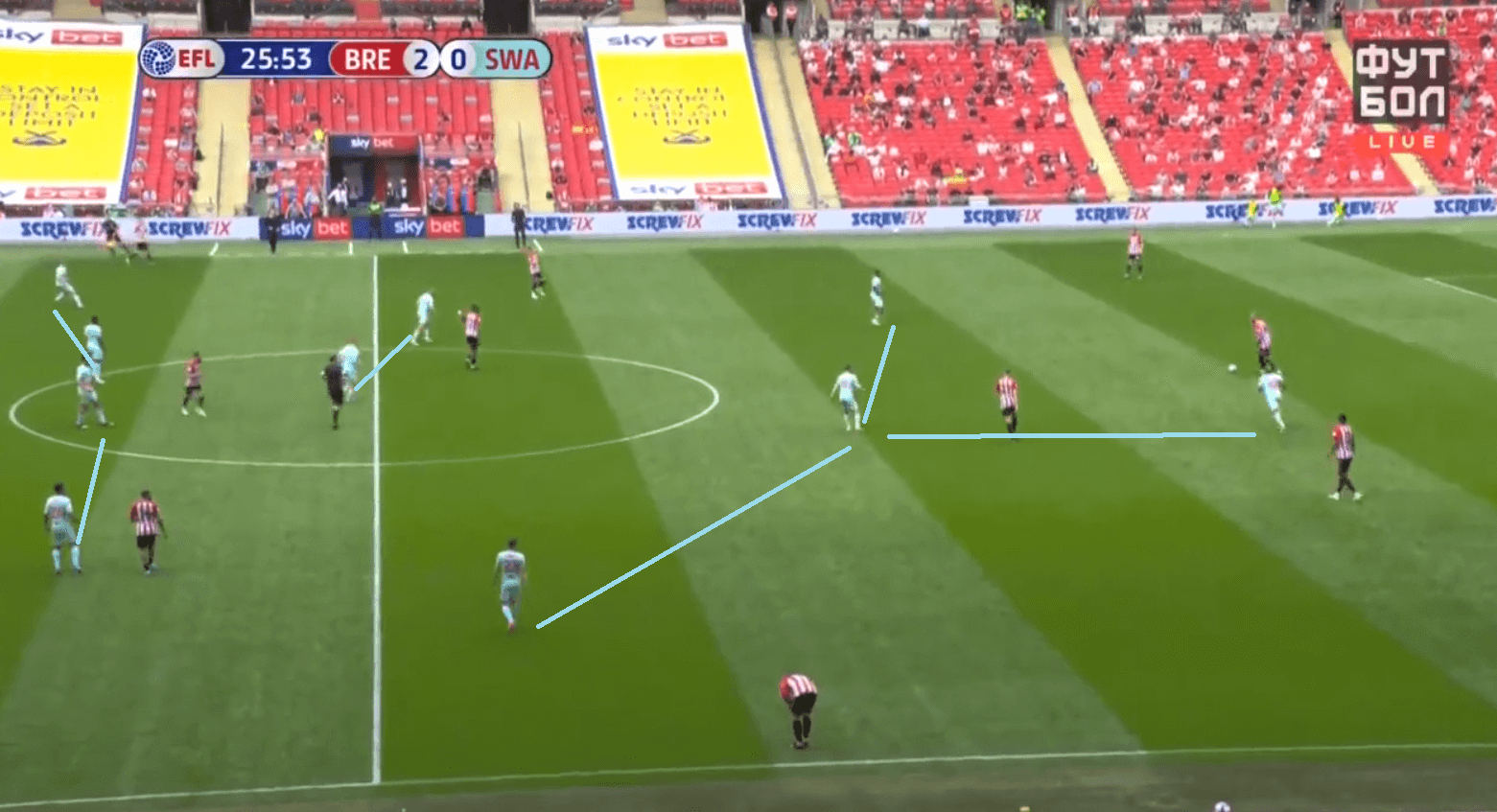 This led to some nice moments that could have been used well by them. The presence of Roberts (blue circled)  higher up the pitch due to Naughton (red circled) playing as a right-back prompted Brentford’s defence to spread and get dragged. This opened gaps in the line like in the image below where a 3rd man run could have been effective in getting the ball into the box. 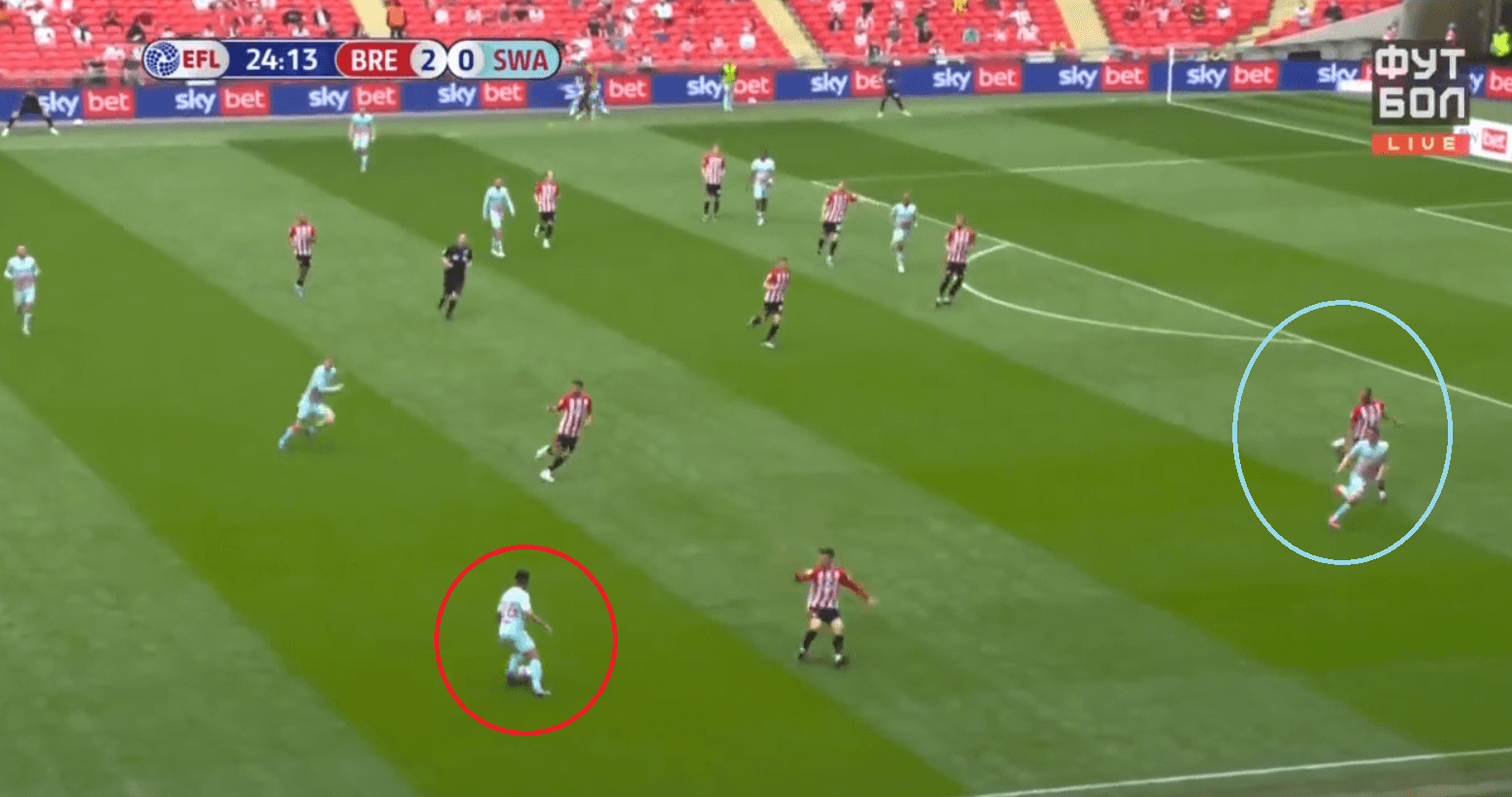 They did use the runs to good effect sometimes as we can see in the below image we can see Bidwell making a run and his run meant that the Brentford’s wing-back cannot go wide to press Roberts. Now a pass to Roberts who has time and space on the ball to provide a cross. He produced a shot-assist for Ayew who couldn’t meet it well. 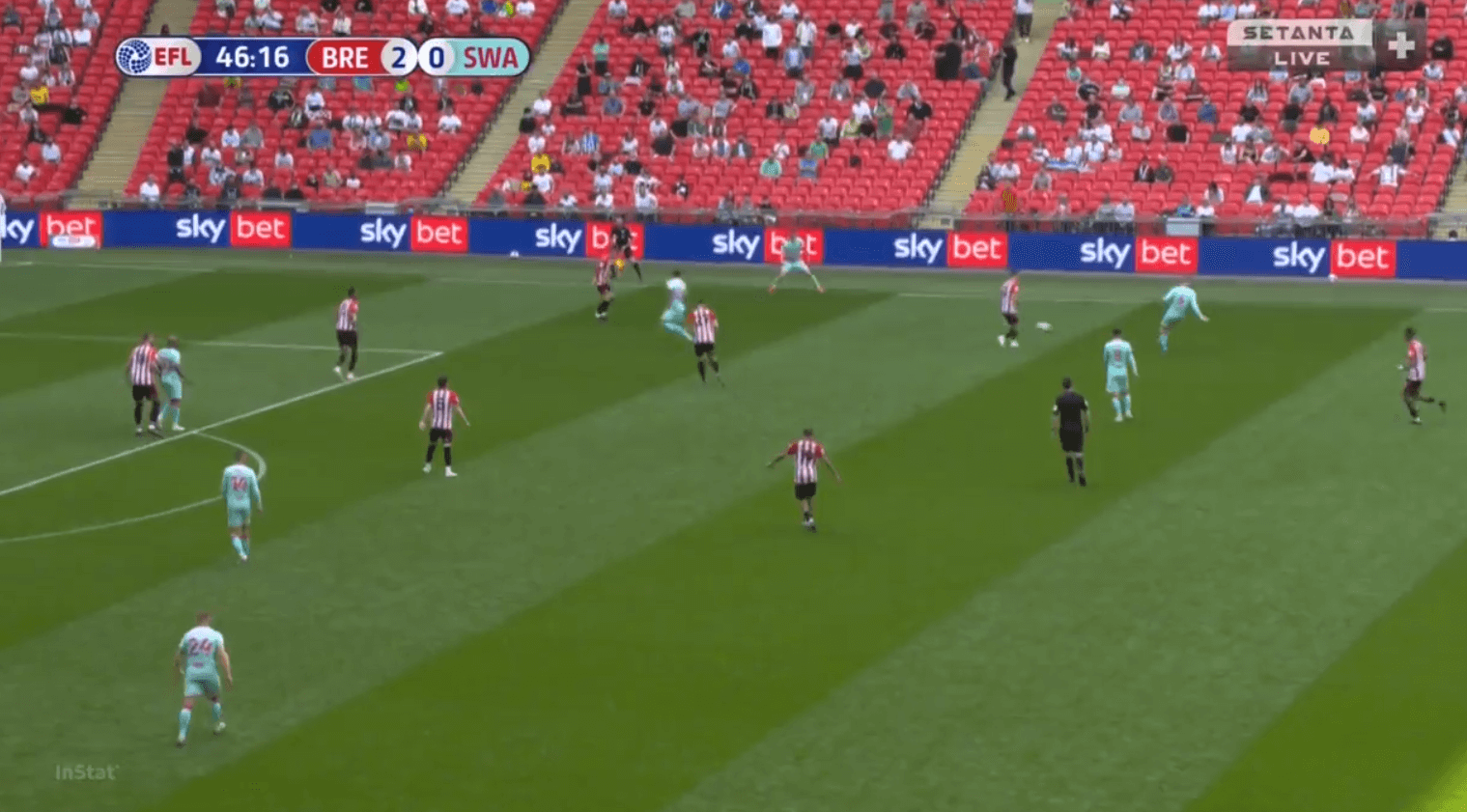 Another important change that was made to the system was to keep the forwards wide (Lowe on the left side and Roberts on the right). This along with the midfielders positioning on the half-spaces meant that the staggering was decent enough to trouble the Brentford players. We can see Lowe wide and has pinned the wing-back in the image below. A pass from the Swansea left-back to him and also an overlap meant the wing-back now had to deal with a 2v1 situation. Also beside him, we can see Hourihane positioned with huge space ahead of him and also in a good position to receive a pass from Lowe. 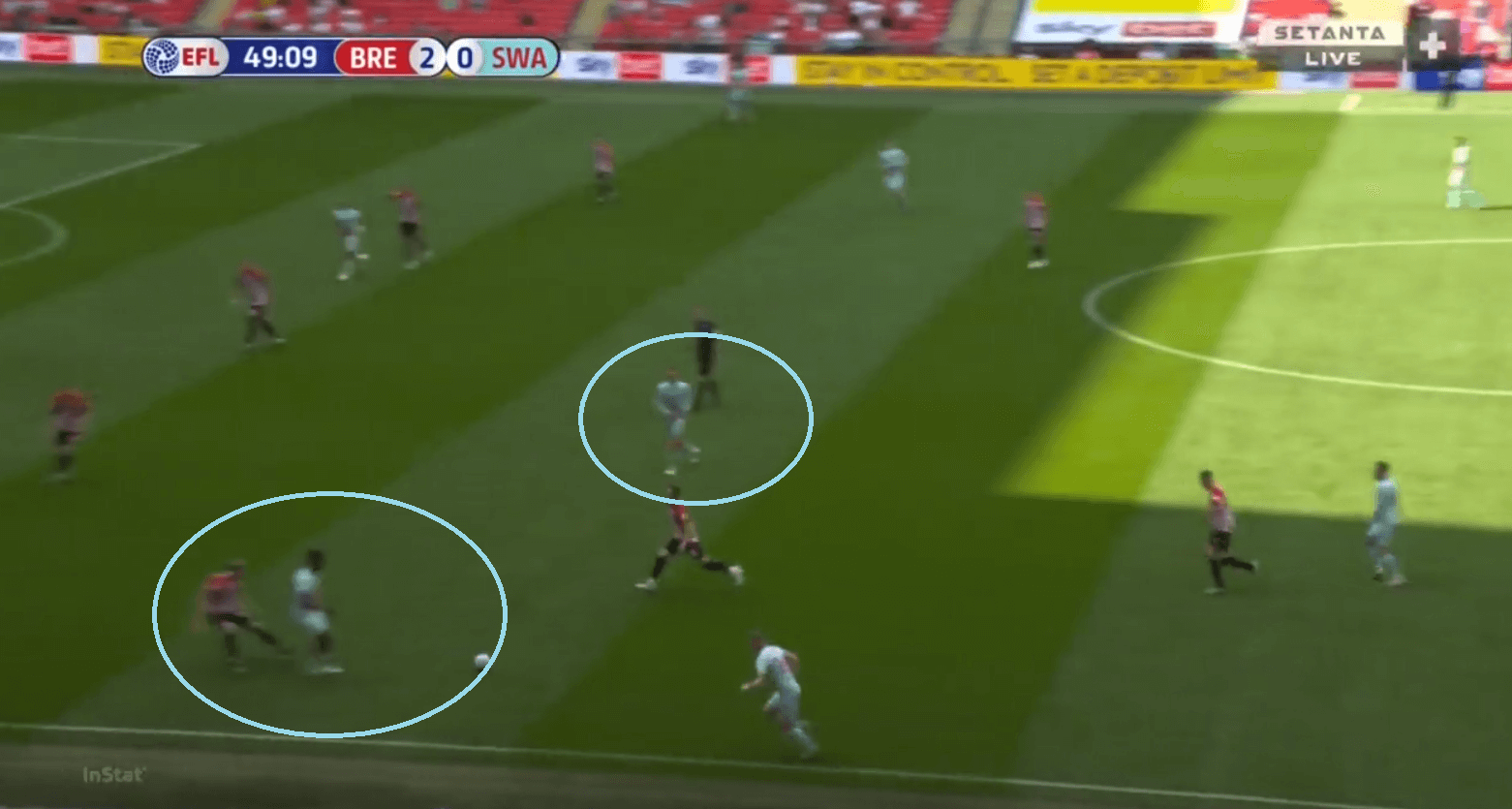 These small changes did lead to an improvement and Swansea started the second half in a much better fashion compared to the first. A red card to Fulton put an end to their fight and coming back from two goals down was no longer under their sight.

Brentford deservingly won the game and a promotion to the top-flight that had eluded them for 74 years. Their approach at the start of the game paid dividends as they rattled Swansea City to a 2 goal lead which was later defended comfortably.