Since the Qatar group purchased Paris Saint-Germain in 2011, only Montpellier and Monaco were able to take the Ligue 1 crown off PSG in the last decade. The club from the capital had won seven of the last nine Ligue 1 titles, including three consecutive titles under Unai Emery and then Thomas Tuchel. However, a new, young, and fresh force flourished in France this season and became the best in Ligue 1 to dethrone PSG – Christophe Galtier’s team.

When Galtier took over Lille in December 2017, the club was in the relegation zone. However, things quickly reversed as the former Saint-Etienne head coach brought them back to the UEFA Champions League. Lille’s triumph this season was their first title win in 10 years, with the last one coming just before QSI’s purchase of PSG changed the playing field in France.

This tactical analysis will introduce three of the key concepts of Galtier’s Lille that brought them success.

Galtier largely used a 4-4-2 formation and rarely changed to a different system. According to Wyscout, 92% of Lille’s game time this season saw them play in a 4-4-2, which shows the head coach’s belief in his methods. However, within this shape, Galtier was often quite flexible, changing roles and duties based on the opposition as well as the characteristics of the players in the XI.

Their shape in possession would often be a 3-2-5, with the right-back, Zeki Çelik, tucking infield to become the third centre-back, and the left-back Reinildo pushing high to join the attacking line. This was done to create numerical superiority against an opposition back four (5v4), with a pair of central midfielders in front of the defence to guard against defensive transitions. Boubakary Soumaré, who is rumoured to be joining Leicester City in the summer, had a strong season here, with the midfielders not having a particularly big role in the team’s build-up play. 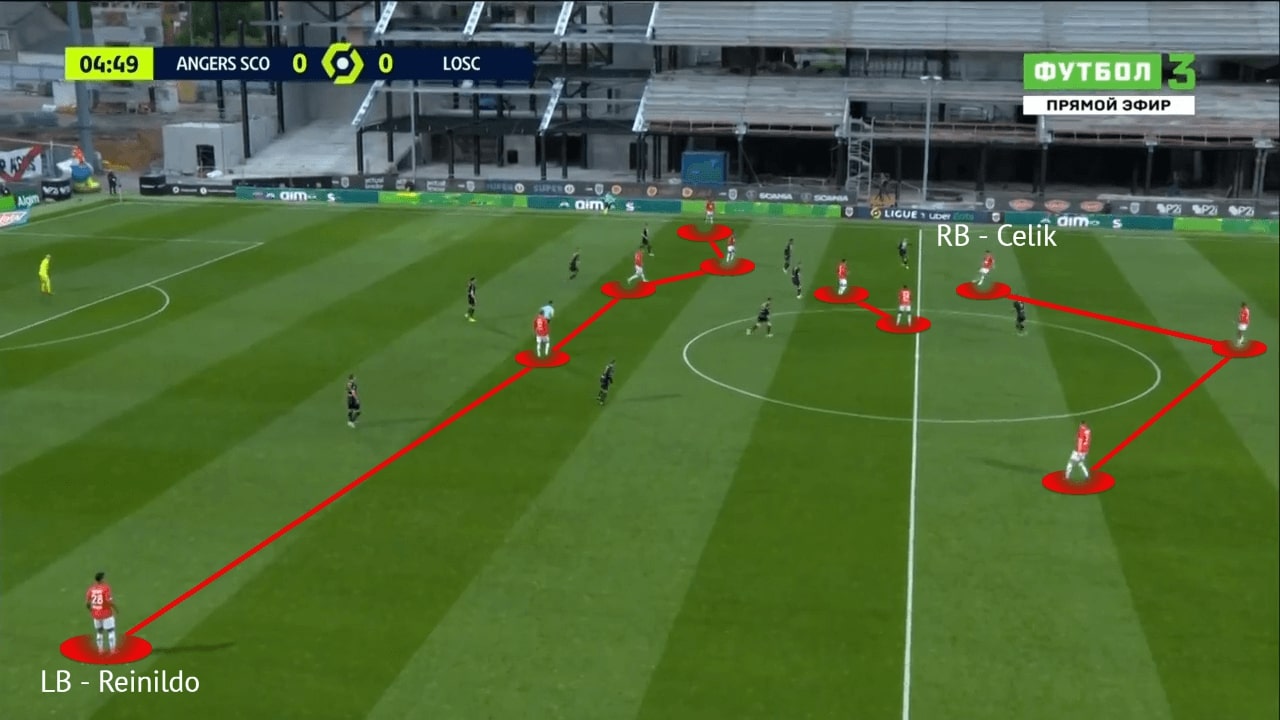 The back three shape allowed the wide centre-backs to advance into the half-spaces and bring the ball forward, as they would usually have numerical superiority over the opposition’s attacking line. Veteran José Fonte was therefore used as the central player in this back three, and he would stay back, with Çelik and Sven Botman as the two to bring the ball out. Both players are young, comfortable on the ball, and have the recovery pace to get back if caught higher upfield. We can see Çelik on the ball in an advanced position in the next image.

The front five would provide offensive depth through runs in behind, with the pace of Jonathan Bamba, Timothy Weah, and Jonathan Ikoné being a key part of this tactic. Çelik’s compatriot Burak Yilmaz would also try and run in behind, as seen in the image, but he could also drop deep to receive possession between the lines and play passes to his forward-running teammates.

With a strike pair used, this job would often alternate between the two forwards, and in this example, it is Jonathan David who drops deep to offer a vertical passing option for Çelik. Renato Sanches holds the width on the right, and thus this creates problems for the defensive line with regard to their decisions to follow players or stay in their own shape. Lille were therefore usually able to have several passing options in their second phase.

This was the usual and slightly conservative approach adopted by Galtier – however, they could also change to a more aggressive system, where their shape would be a 4-2-4 on the ball. Here, the two wingers would stay narrow in the half-spaces and close to the strikers, which would keep the opposition’s defensive line narrow, and open up the wide areas for the full-backs to advance into.

Having a pair of wingers playing on their ‘wrong’ sides also meant that diagonal passes across the half-spaces would be easier, allowing Lille to switch play from one vertical half to the other very easily. We can see all of this in the next image, where Çelik has a lot of space down the right to run into, while Ikoné offers a shorter diagonal option for Sanches as well. 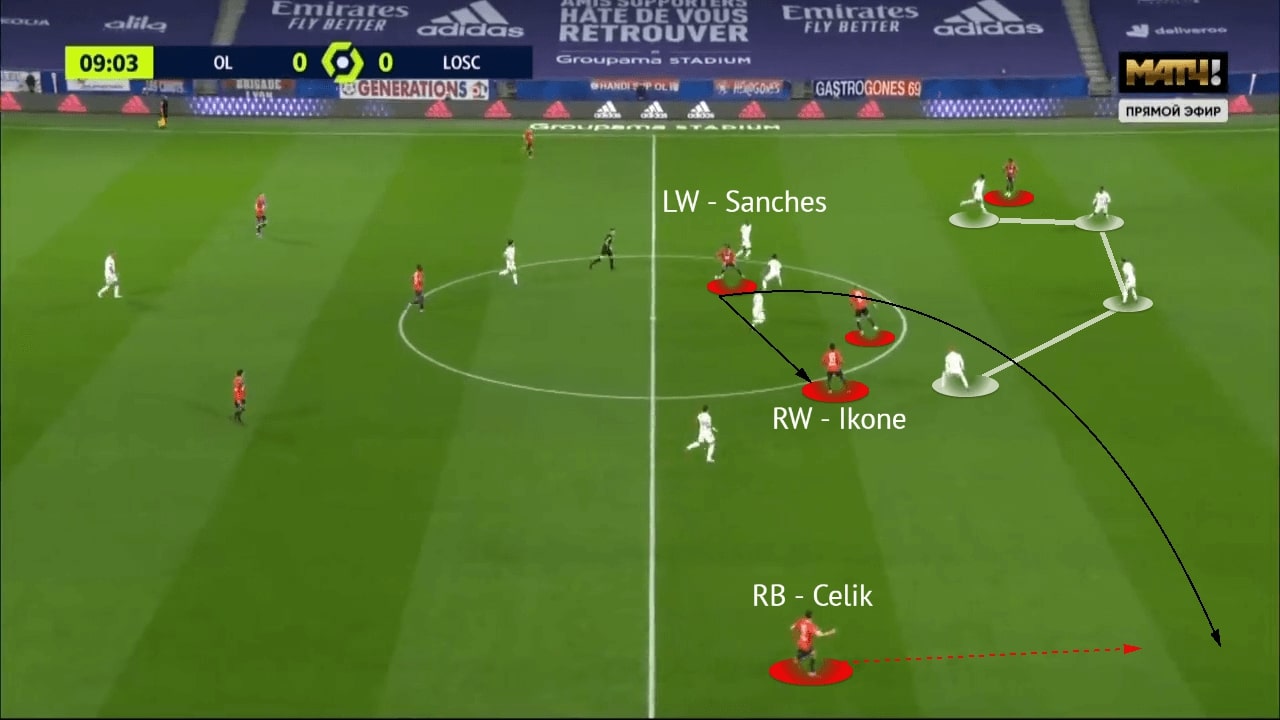 This approach would also see the attacking line attack in a very direct manner, trying to disorganize the opposition’s defensive line and thereby create space for each other.

The next example shows the benefit of this tactic, culminating in a crucial goal in their match against PSG. Bamba’s movement was the key here, as despite being the left winger, he came central and attacked the box, which drew the PSG backline deeper and created the space in front of the penalty area for David, who was able to finish off the cut-back from the right flank. 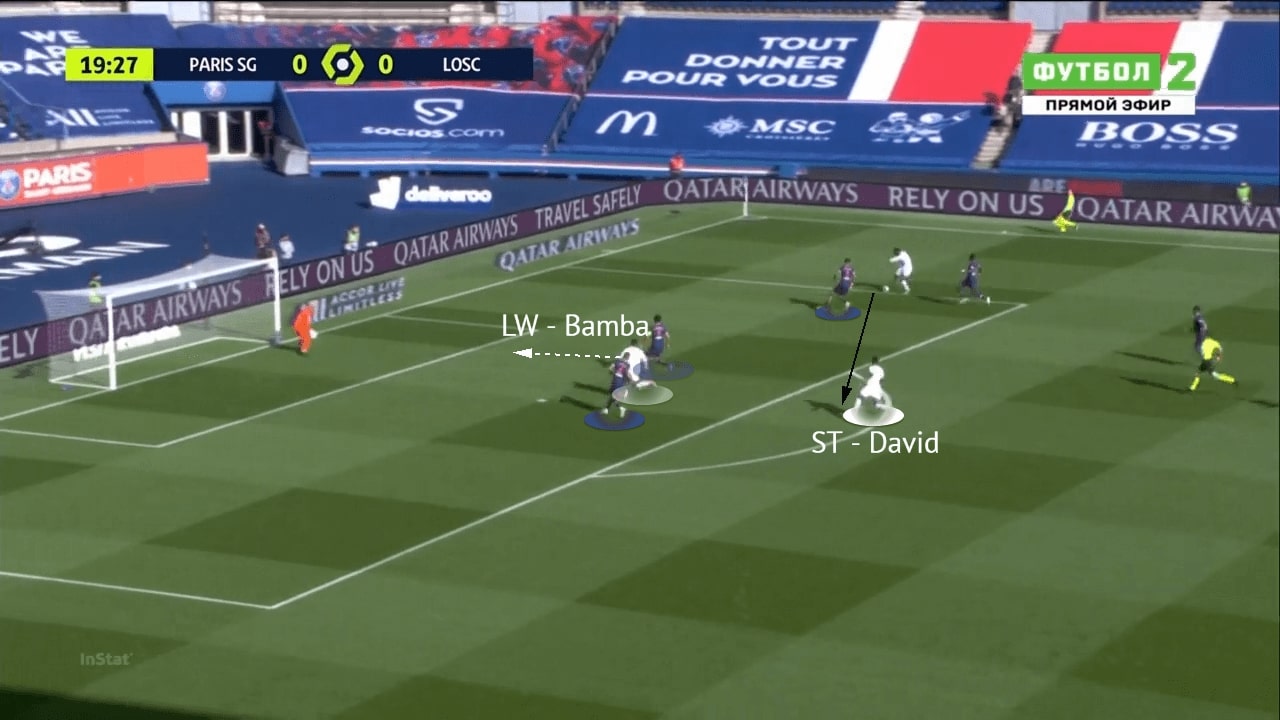 Lille did outperform their xG significantly – they scored 64 goals against an xG of 51.2, and this was only the 11th highest xG ranking in the league. Yilmaz, the former Galatasaray striker was key in this regard, scoring 18 goals against an xG total of just 10.81.

Lille under Galtier have not been an aggresive pressing unit, with their average PPDA for the season at 12.38, which is eighth in all of Ligue 1. They preferred to defend in a solid, compact mid-block, and allowing the opposition to come onto them.

They would drop into a 4-4-2 shape when the opposition centre-backs had the ball, and we can see in the next image how they allowed opponents to advance up to and even beyond the halfway line quite easily. The strikers would not press the centre-backs, but stay central and try to cover the midfield through their cover shadow, which, in turn, allowed the Lille central midfielders to stay deeper as well. The wingers also tucked in and further compressed the central space, forcing opponents wide where Lille could then press more aggressively to try and win the ball back. 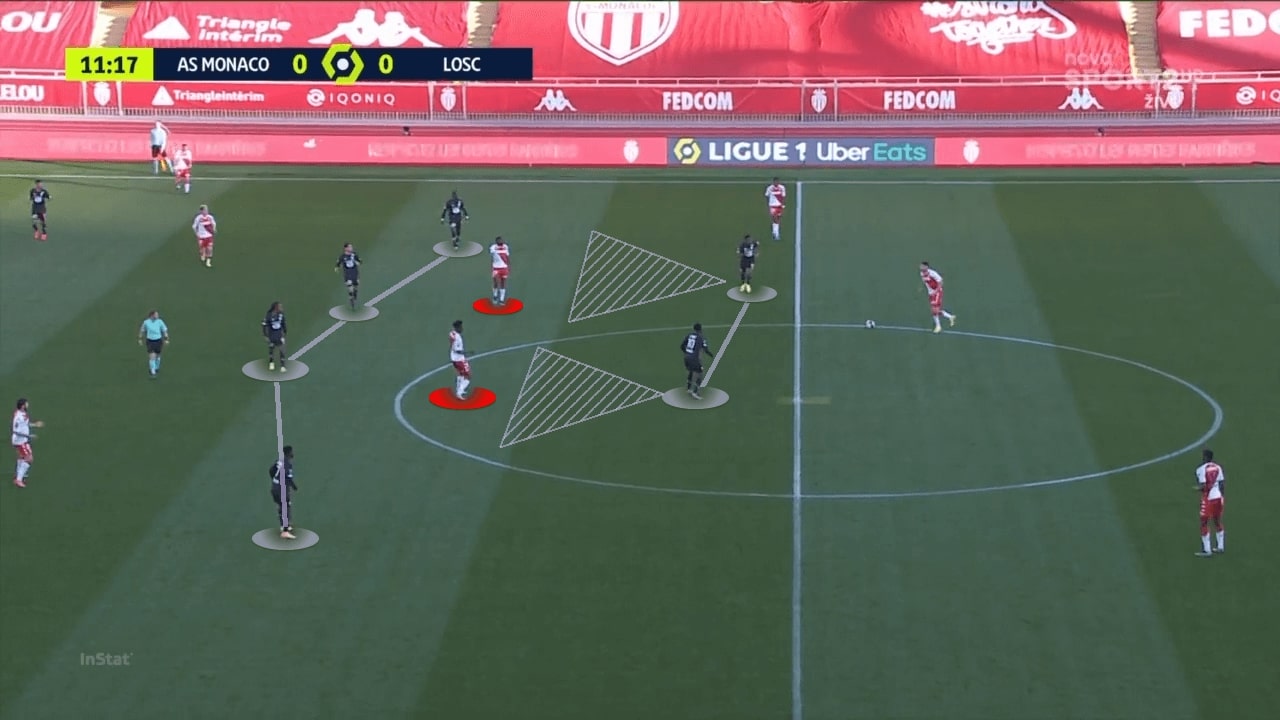 Lille’s commitment to defending the central spaces can be seen in the next image as well. Sometimes one of the midfielders would move higher to join the first line of the press, and in these cases one of the wingers would immediately drop in to maintain numbers centrally.

Lille were very committed to defending spaces at the centre. Sometimes they put higher midfielders to support the strikers in the press, the distancing of these two groups of players must be tight. Then, the far-side winger would come inside to defend spaces at the centre narrowly as an additional midfielder. This shows Galtier’s team would prioritize the coverage at the central zone instead of going out to press.

The image shows the positive impact of such a move. When the Lille midfielders moved wider to defend on the ball-side, the far-side half-spaces were opened and occupied by a Nice player. Meanwhile, there was also another Nice player at the touchline, and without the winger tucking inside, Çelik was overloaded in a 1v2.

However, with asymmetrical wingers, Lille guarded this zone to reach numerical equality. It limited the threat of the switches at the expense of stopping the ball circulation. Some teams might use the winger higher to press the far-side centre-back, and leave the right-back in a 1v2 but that was not what Galtier wanted. 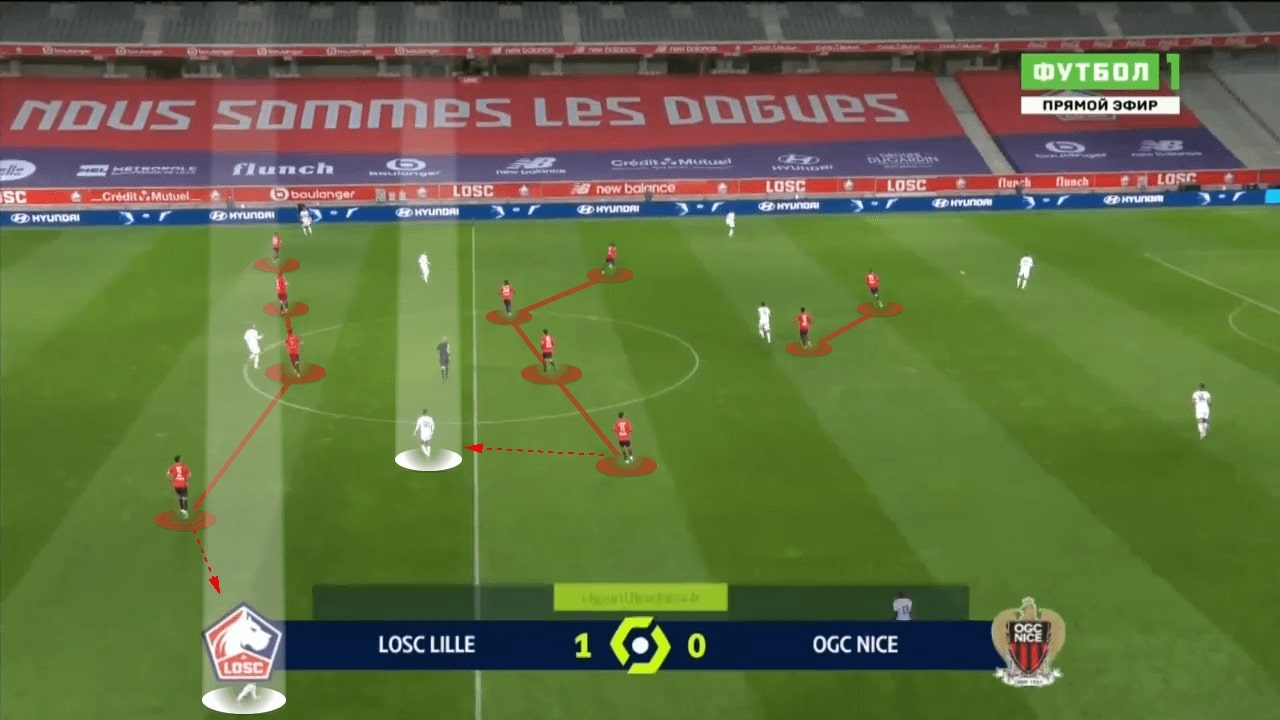 Lille used similar concepts when defending goal-kicks, as we can see below. They usually committed five players to the press, with one player positioned centrally and deeper behind this unit to cover the central space and protect the centre-backs – in this case it was Soumaré. Their shape was more like a 4-1-3-2 with the wingers staying asymmetrical to provide balance.

The presence of Soumaré is extremely important, as opponents would easily be able to break through the lines and get behind Lille’s midfield, which would force the Lille centre-backs to step up and therefore expose Fonte, in particular, who at the age of 37 does not have a lot of mobility and pace. 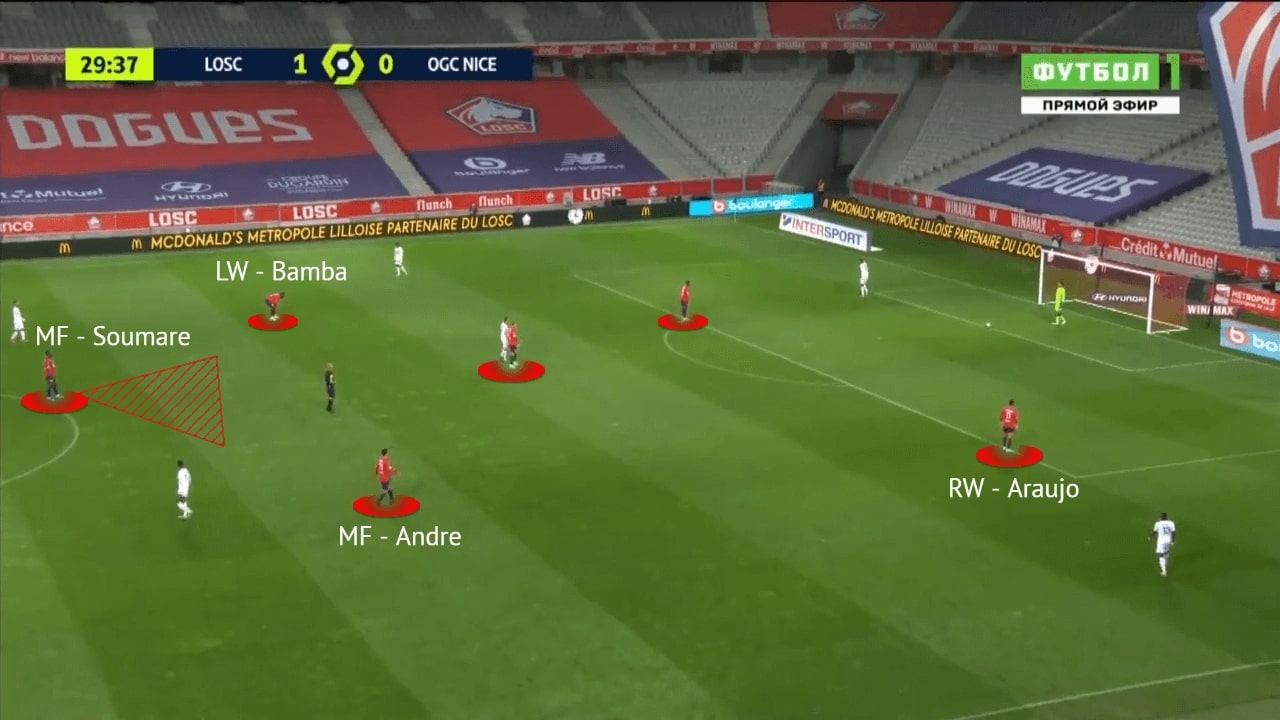 As mentioned in the above analysis, Lille have been good at inviting the opposition to play down the flanks, allowing them to press in those areas. Galtier’s team are good at using wide pressing traps to win the ball back and start counter-attacks.

The next image shows Lille’s wide defending – they are still in a 4-4-2 shape, but are crowding the ball-side to squeeze space. The full-backs usually stepped up very early to press the wingers on their back foot, and this aggressive marking was coordinated with the centre-backs, as they also need a player to cover space behind. The rest of the team would try and get as close to the ball side as possible to overload this area, and this helped them in offensive transitions as well, as they had a number of players in close proximity making a variety of runs to offer passing options to the man on the ball.

The second image here also demonstrates similar concepts, although Lille are defending in a deeper block here. They are very good at pressing on the flanks to recover possession via numerical superiority – as we can see here, Lille have a 4v3 in the highlighted zone, with players moving to close down spaces. 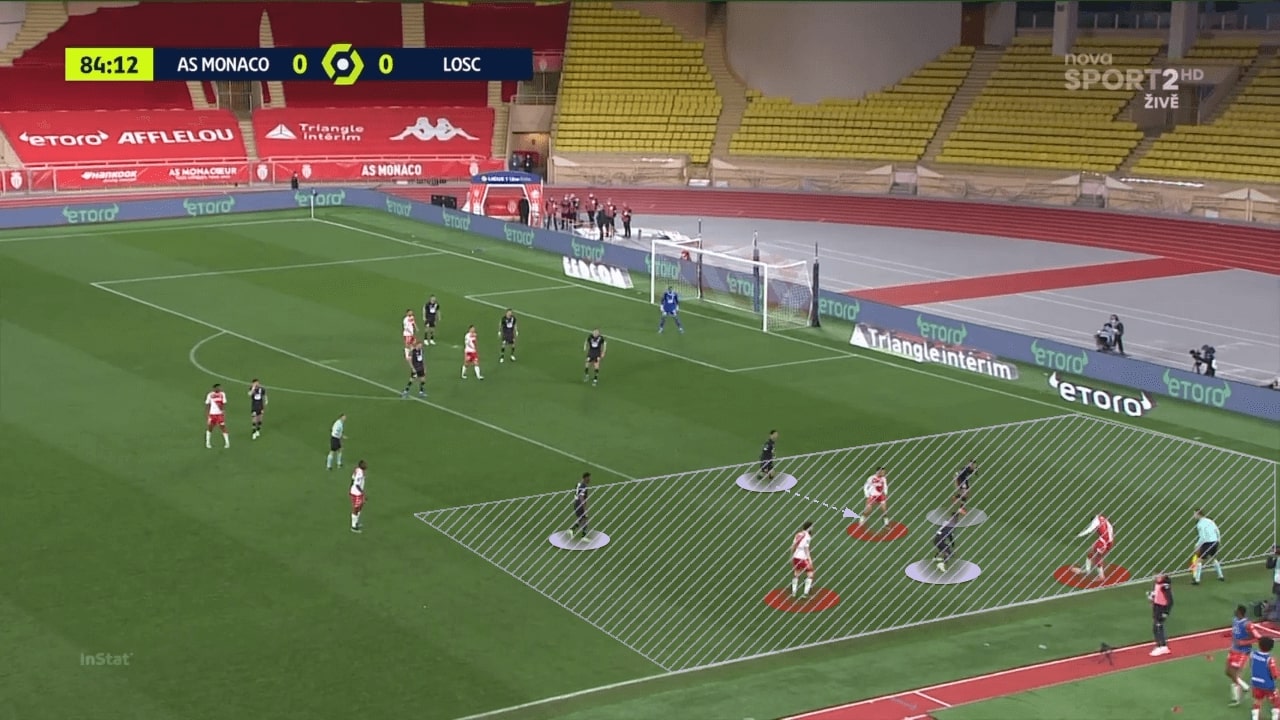 When defending in their penalty area, Lille were excellent at protecting the six-yard box. In the next image, we can see how they have managed to have six players defending this zone, which allows each player to defend smaller spaces. Although this approach did leave space open at the edge of the area, it was always better to protect the six-yard box, given the high probability of scoring from chances in that zone. 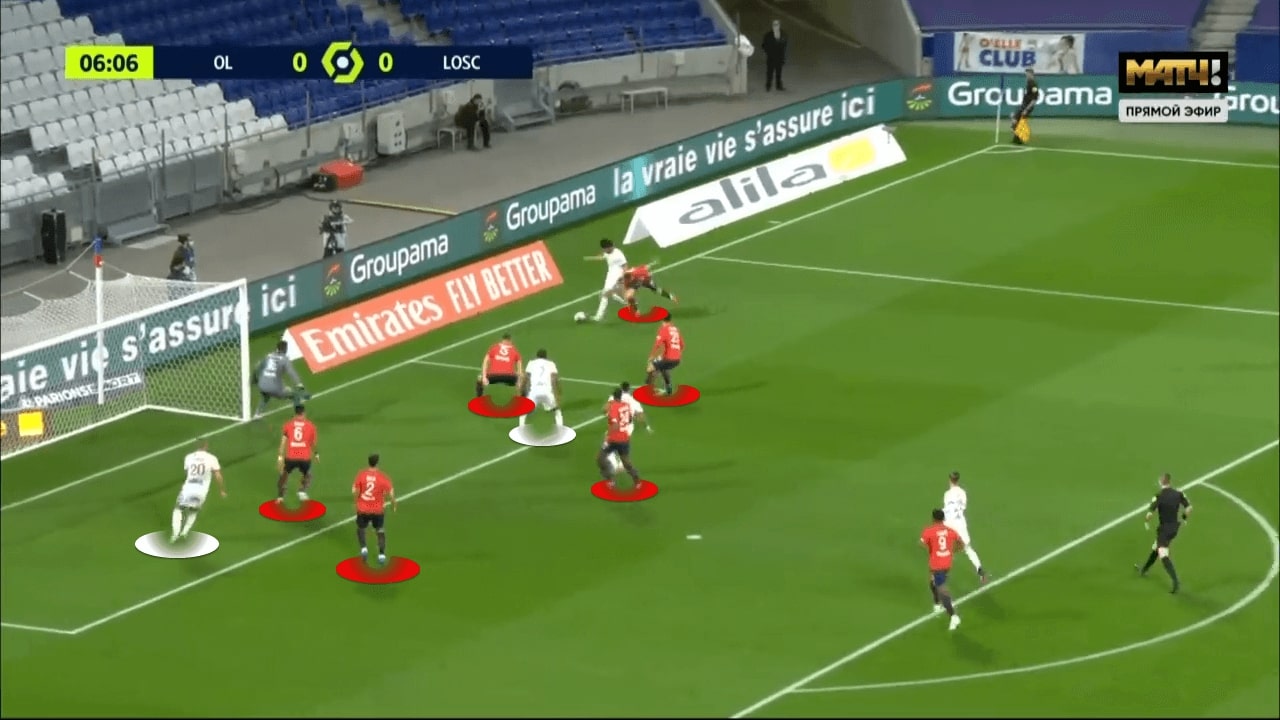 A special mention must be made of the Lille goalkeeper, Mike Maignan. The 25-year-old, who has just joined AC Milan, had a post-shot xG of 32.35 this season, but conceded only 23 goals, which is a testament to his quality.

This season has been nothing short of miraculous for Lille, with massive credit to former sporting director Luis Campos as well, who had a huge hand in building this side, along with Galtier and the rest of the coaching staff. As we have shown in this analysis, the team attacked smartly and defended in a collective manner, and their flexibility and persistence helped to make them the best team in France this season. Of course, given the reality of modern football, this team is now likely to be broken up, with Maignan being just the first of several expected departures. Nevertheless, this title win will be a special moment in Lille’s history forever, and this has also helped cement Galtier’s reputation as one of the best coaches in France.