Moussa Diaby 2021/22: Thriving and in the best of his form career – scout report

This season has been a breakthrough season for Bayer Leverkusen’s Moussa Diaby. The 22-year-old has scored twelve non-penalty goals and, has sixteen assists in all competitions. He is second to Patrick Schick for goals in Bayer Leverkusen’s squad and second to Florian Wirtz for assists.

The young French star has been a major beneficiary of Gerardo Seoane taking over from Peter Bosz at the end of last season. The style of play that Gerardo Seoane has implemented at Bayer Leverkusen has allowed Moussa Diaby to prosper in what has been a more vertically attacking approach.

In this scout report, we will provide a tactical and statistical analysis which focuses on Moussa Diaby’s key attacking traits and how they have led to him having the best season of his career so far.

Although he is left-footed Moussa Diaby has featured primarily as a right-winger this season and is often used on the right side of a 4-2-3-1 formation.

Due to the nature of Bayer Leverkusen’s attacking play under Gerardo Seoane, the 23-year-old can be seen rotating his position throughout a match. Even when positioned on the right, Diaby will pop up through the centre and on the left-hand side as Gerardo Seoane likes the front four players to rotate positions in the attacking third.

This heat map shows the average area of the pitch that Moussa Diaby picks up for Bayer Leverkusen this season. 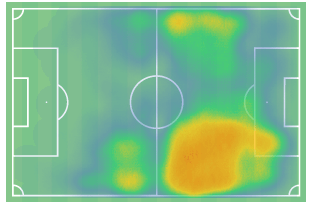 Positionally you can see his movement and the spaces he looks to occupy. You can see how he features heavily on the right-hand side but not just in the one zone. He moves between playing on the outside and playing on inside and controlling the half-space.

This allows Bayer Leverkusen greater fluidity in attack. This type of movement from Moussa Diaby creates space for other players to attack and the unpredictability of the movement can often disrupt an opponent’s defensive structure.

The rotational movement that Gerardo Seoane has instructed from his attacking players has proven to be an essential part in Moussa Diaby’s strong attacking output this season.

When compared to last season under Peter Bosz you can see how Moussa Diaby‘s position differs. This heat map shows Diaby being positioned in the left and right channels but remaining on the outside. There is little movement and time spent in either of the half-spaces and central part of the pitch. 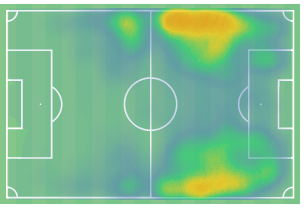 Peter Bosz looked to utilise Moussa Diaby as a player who maintained the team’s attacking width and be an outlet for the dutchman’s possession-based approach. He wanted Diaby to operate solely as a provider.

Logically this meant Moussa Diaby being positioned further away from the opposition’s goal. Last season he made thirty-two appearances scoring four (non-penalty) goals and assisting eleven goals in all competitions.

You can see immediately from his goal-scoring stats the impact that Gerardo Seoane’s tactics have had on his game. He has already scored twelve (non-penalty) goals and has sixteen assists in all competitions, with seven games still to play.

When compiling the data analysis, I decided to focus on the statistics that have stood out for Diaby this season. These are goals and assists.

German football places huge importance on transition play. The approach taken by many of the coaches within the Bundesliga is to win the game during transition. Like Bayer Leverkusen’s approach this season under Seoane, they allow and want their attack to rotate and move freely in the attacking third.

Therefore, when I was gathering the data for the statistical analysis below, I decided not to just compare Moussa Diaby to the rest of the right-wingers in the league. I have included the wide players that play on the left along with the attacking midfielders that play centrally behind their teams’ central striker. 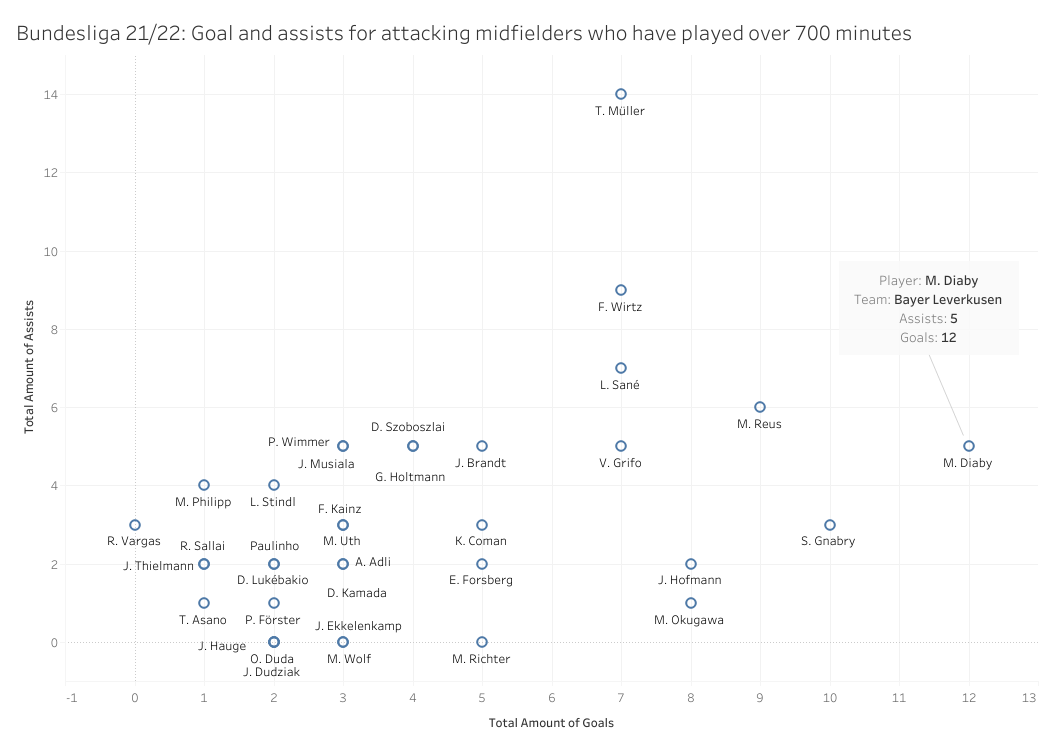 Moussa Diaby is the highest goal-scoring attacking midfielder in the Bundesliga. He is joint 4th for assists. The three players above him play for Dortmund and Bayern, and Florian Wirtz who is also having a standout season is his teammate.

This shows how effective and dangerous Bayer Leverkusen are during the attacking phase. They have two attacking players other than their main striker that produces goals and assists.

The next statistical analysis compares Moussa Diaby with the players who are twenty-three and under and have played 900 minutes across Europe’s top five leagues. 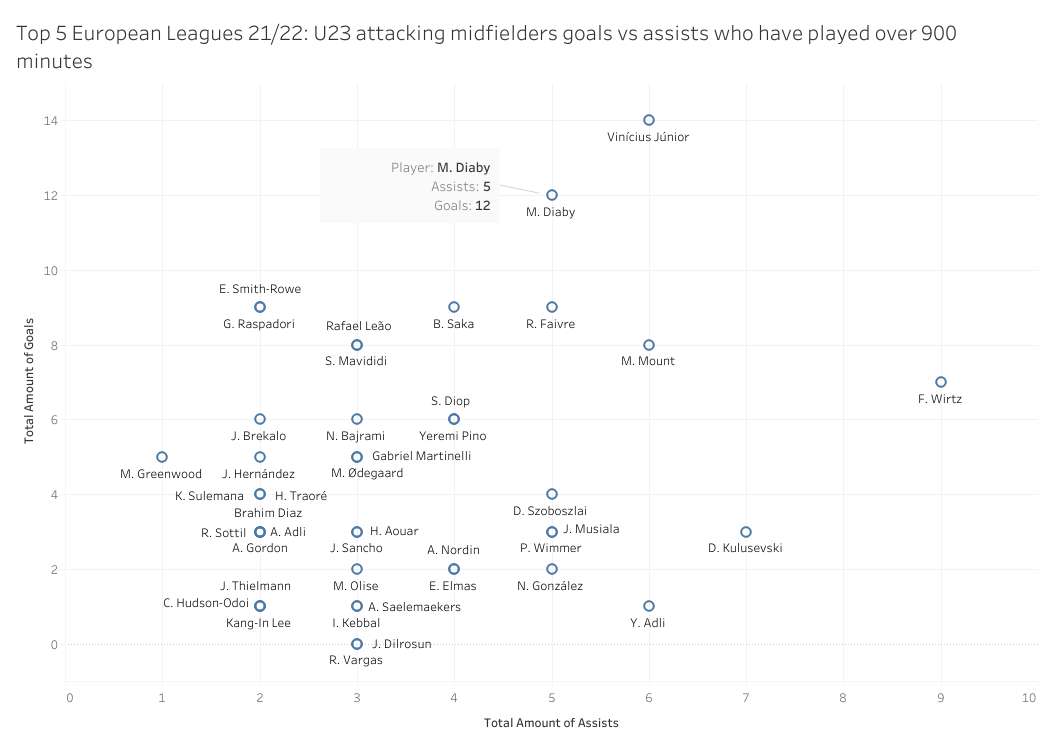 As you can his attacking output still features high when compared to players across Europe. He is second to only Vinicius Junior for the number of goals scored and still performing above the average for assists.

Moussa Diaby movement within the attacking third is a key component to both his individual game and Bayer Leverkusen’s attack.

I confirmed earlier in this analysis that movement and rotation from the attacking players play a vital part in how Leverkusen attack. Moussa Diaby is central to this.

His ability to create and attack space with and without the ball makes it very difficult to be marked. It proves to be very effective at disrupting the opposition’s defence and creating space for his teammates.

Here Moussa Diaby is positioned in the half-space on the right-hand side, in this scenario he drops to receive the ball. This is because the left full-back of Arminia Bielefeld is sitting narrow. The full-back can’t follow him due to the possibility of a forward run down the right flank from Jeremie Frimpong.

As Diaby receives the ball the half-space between Arminia Bielefeld’s left-back and left centre back has increased.  This is the space the twenty-two Frenchman now looks to attack.

As the arrows show, he plays a one-two with Florian Wirtz and drives forward through the half-space and scores to put Bayer Leverkusen two-nil up in this match.

It’s his ability to attack space that has seen him produce his best goal tally. This is another example showing his ability to see the space and anticipate the play. Which results in a goal

Florian Wirtz plays a chipped ball over the FC Augsburg defence and into Amine Adli’s path. Moussa Diaby doesn’t run towards the ball or wait to see what happens next. He attacks the space on the opposite side to where the ball has been played. Once again, he scores during this passage of play.

When Bayer Leverkusen win the ball back, they look to transition to attack very quickly. Moussa Diaby plays a pivotal part in that transition. He is often the outlet.

During the defensive transition, Diaby often remains in attack. This part of a strategy used that enables Bayer Leverkusen to transition effectively with Diaby’s pace and movement in behind. The run will stretch the opposition’s defence.

This example highlights how quick Leverkusen look to transition and how Diaby’s run in behind is operated.

He cuts across from the right-hand side and when Patrick Schick comes towards the ball Diaby attacks the space in behind the defence with a run between the two centre backs. This attack takes only three passes.

Another example in the recent Europa League tie with Atalanta. Leverkusen win the second ball and after two passes Moussa Diaby is penetrating Atalanta’s defensive third with a run in behind.

When Leverkusen are out of possession, Diaby’s defensive play can be questioned

He is only completing 2.84 successful defensive actions per 90minutes. Along with that he only completes 4 defensive duels per 90 minutes with has a success rate of 45%. When compared to the other attacking players this is low and could cause issues when Bayer Leverkusen press high up the pitch.

We’ve highlighted how well Moussa Diaby anticipates, creates and attacks space. Whilst he remains in Germany this will continue. Given that a high percentage of teams in the Bundesliga look to play on the front foot and will often leave space.

However, if Moussa Diaby comes across teams playing a low block and that space becomes limited his stats suggest he wouldn’t as effective.

If the opposition closes the space then Moussa Diaby would need to become more decisive with his distribution.

Moussa Diaby is enjoying the best form of his career. He has thrived since Gerardo Seoane took over at Bayer Leverkusen. The tactics the Swiss manager has implemented clearly suit the young Frenchman.

In this scout report, we provide data analysis and tactical analysis to identify key components within Moussa Diaby’s performance. The positional change, the attacking trends and the weaknesses within his game have all been detailed.