For the first time in La Liga history, neither Real Madrid nor Barcelona walked out in their traditional strips for El Clásico. Madrid donned their fresh black kit to commemorate the club’s 120th anniversary while Barça were in their yellow kit carrying the colors of Senyera, the flag of the Catalan region.

Also something fans are not accustomed to is for an El Clásico showdown in mid-March to not be regarded as a potential title decider, as Barça started the day 15 points behind the league leaders Madrid, albeit with a game in hand. Barça continued their remarkable resurgence under Xavi with a resounding 4-0 victory over their rivals, ending a five-game losing streak against the Los Blancos.

This tactical analysis will break down some of the key tactics we saw in Sunday’s match at the Bernabéu.

Real Madrid lined up in an unorthodox 4-3-3 false 9 system with Karim Benzema ruled out with a leg injury. Thibaut Courtois started between the sticks. Dani Carvajal, Éder Militão, David Alaba and Nacho Fernández formed the back four. Casemiro started with Toni Kroos and Federico Valverde in midfield. Up front, Vinícius Júnior and Rodrygo played on the flanks with Luka Modrić occupying the false nine position.

The Blaugrana set-up in their traditional 4-3-3 formation. Ronald Araújo, Gerard Piqué, Eric Garcia and Jordi Alba formed the back four in front of Marc-André Ter Stegen. Sergio Busquets played in the pivot with Frenkie De Jong and Pedri as the two 8’s. Ferrán Torres, Ousmane Dembélé and Pierre-Emerick Aubameyang lead the line for Xavi’s side. 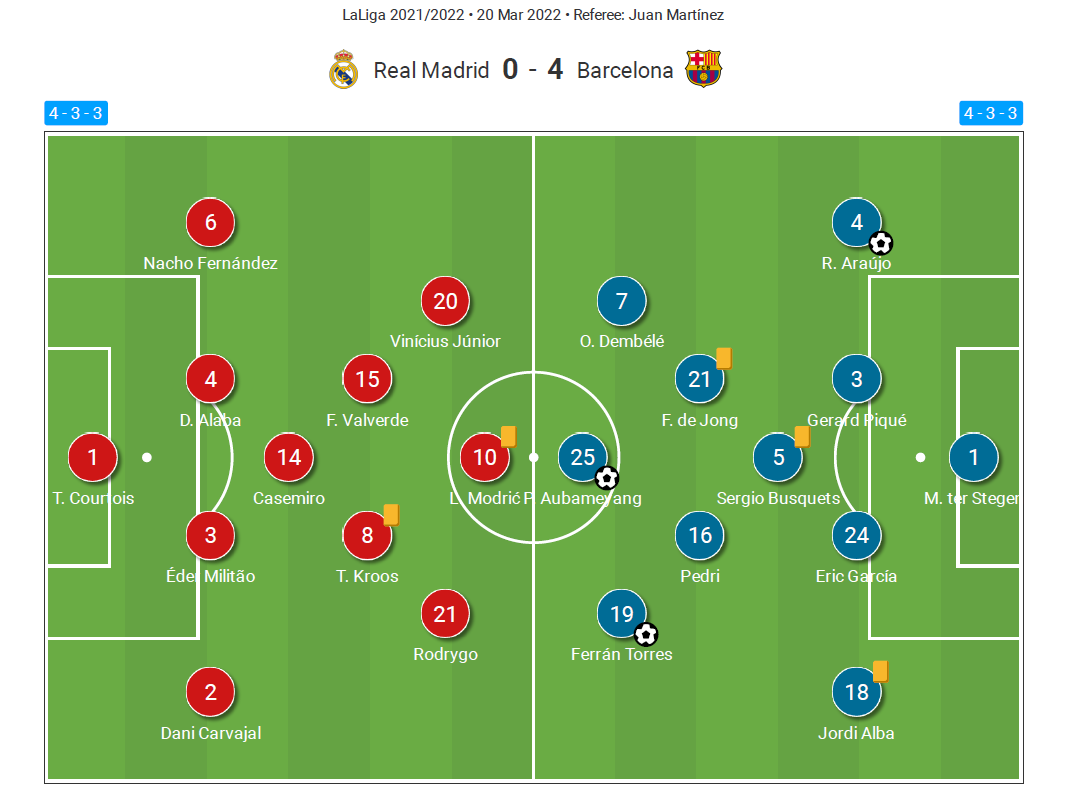 Ancelotti started off with an unorthodox system which alternated between a 4-4-2/4-3-3 on the ball and a 4-4-2 off the ball to try and stop Barcelona playing through the lines. From the start, Madrid found it tough playing without a recognized center forward and their best player in Benzema.

Los Blancos set up with a box midfield during build-up, with either Valverde or Kroos joining Modrić up top. Vinícius maintained as much width as possible looking to receive the ball and cut inside. Rodrygo would frequently drift centrally towards the two 10s to add an extra body in the middle. 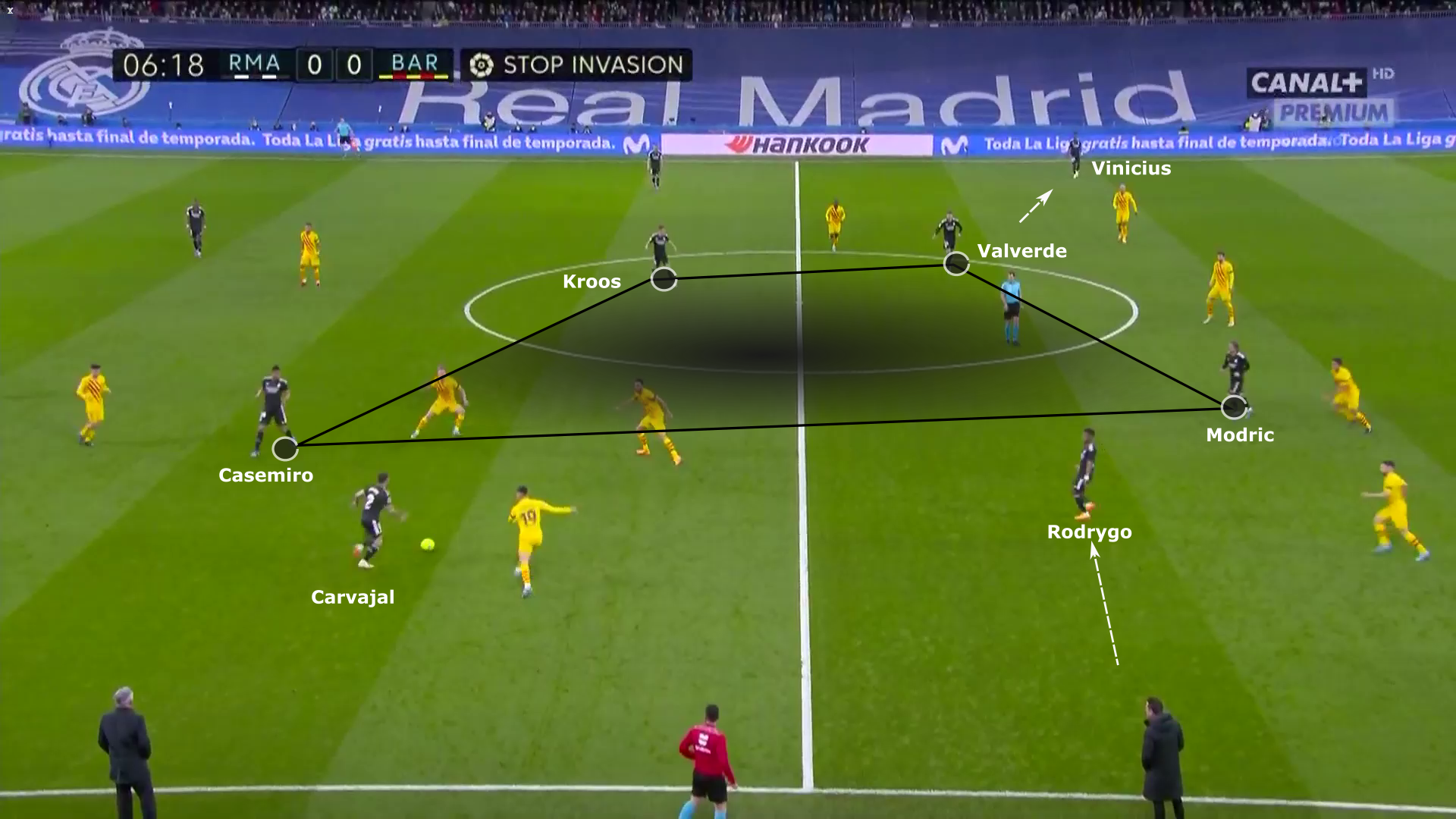 The home side found it difficult to build and break down an organized Barca defense, so they converted the set-up midway through the first half. Rodrygo moved even narrower with Madrid lacking bodies up front and Carvajal pushed forward to provide width meaning the team can now build with a back three. Nacho maintained a reserved position at left-back giving freedom to Vinícius to try and take on Araújo 1v1 and peg him back. Madrid were able to feed balls to Carvajal around Barcelona’s block. From there, not many options were available as Rodrygo found himself under pressure and Vinícius too often isolated on the opposite side. The midfield quartet interchanged positions throughout the half trying to force Barca’s central players out of shape. More often than not they could not find their number 10s between the lines; thus play was repeatedly forced wide. 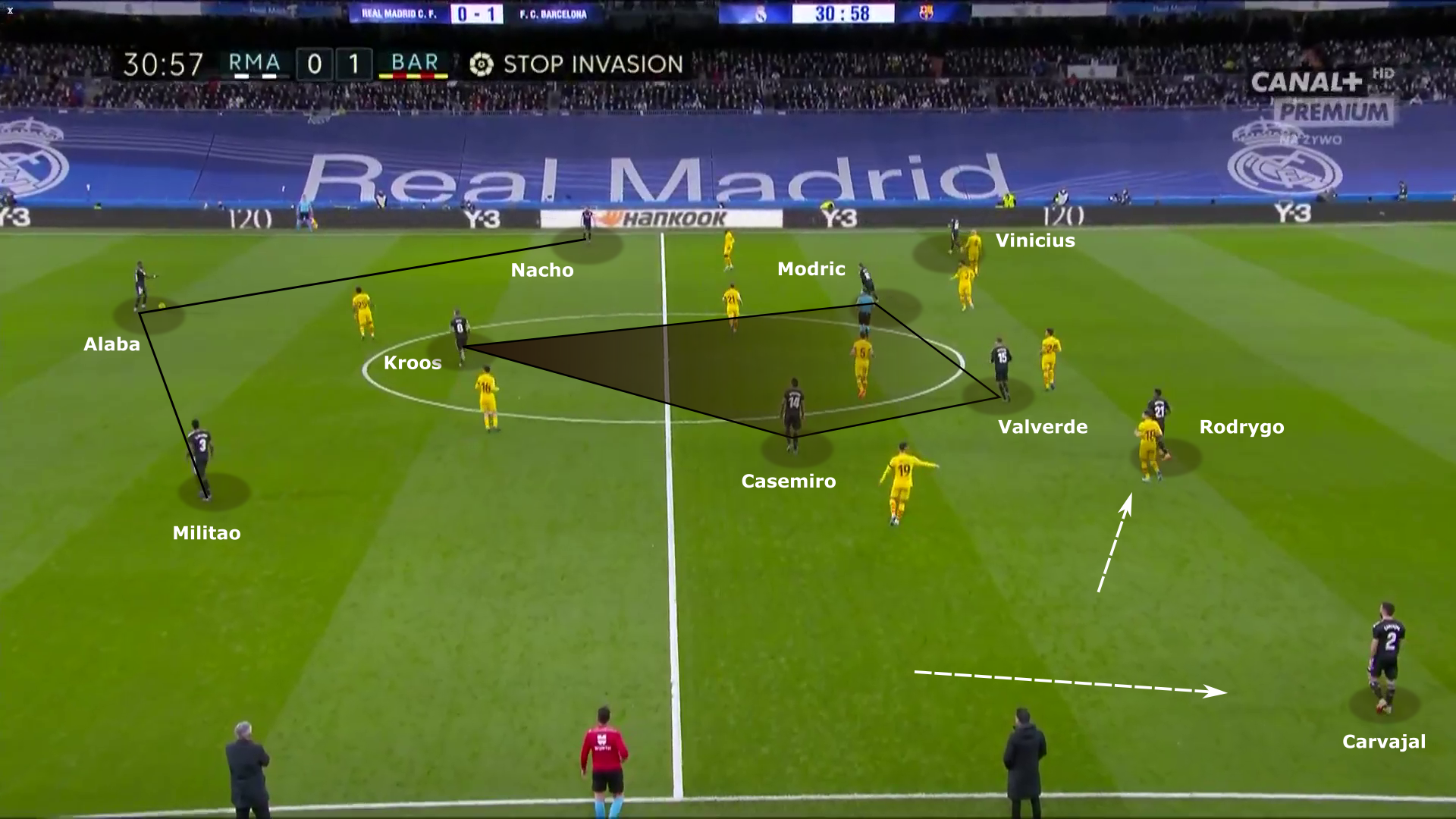 Finding his team 2-0 down at half time, Ancelotti tweaked with the structure and personnel. Mariano Díaz and Eduardo Camavinga replaced Kroos and Carvajal. The 62-year-old switched to a back three to enable his team to be more offensive and on the front foot, but it went horribly wrong. Twenty seconds after the restart, Torres was totally through on goal but his curled shot narrowly missed the target. Madrid’s new back three, Nacho, Militão and Alaba were stretched wide apart as the Barca forwards attacked them man to man. This left massive gaps in behind which the Barca forwards exploited by making vertical runs, moving the ball directly and with vigor from back to front. 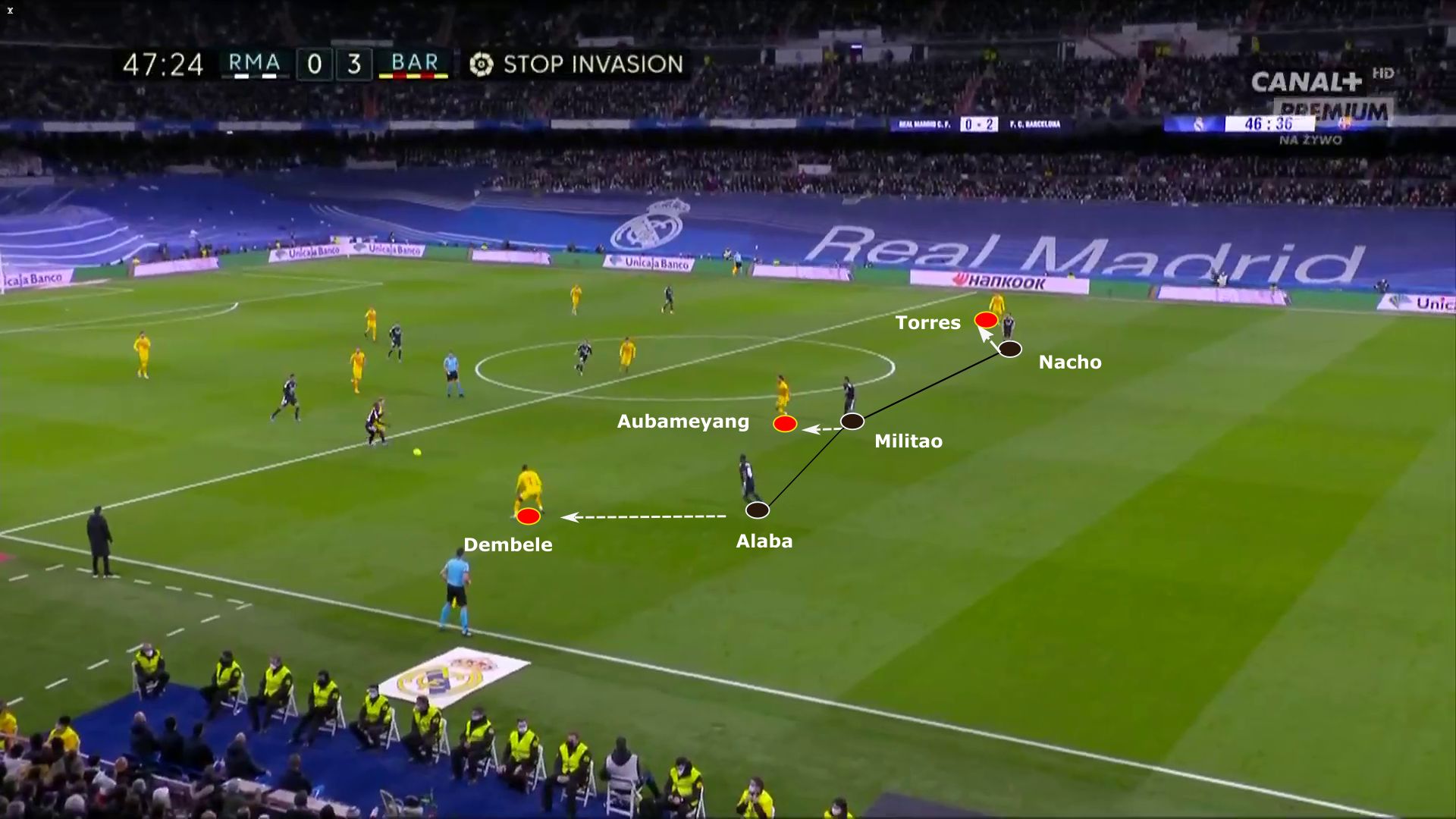 Minutes after the Torres chance, Barca found themselves through on goal yet again. De Jong playing as a free eight intercepts Alaba’s cross and drives forward. He then dinks the ball to Auba and Madrid can sense the trouble heading their way as their defenders are back-peddling. Barca now have the numerical advantage in the opposition box, leading to a 2v1 at the back post and Torres scoring the 3rd goal. 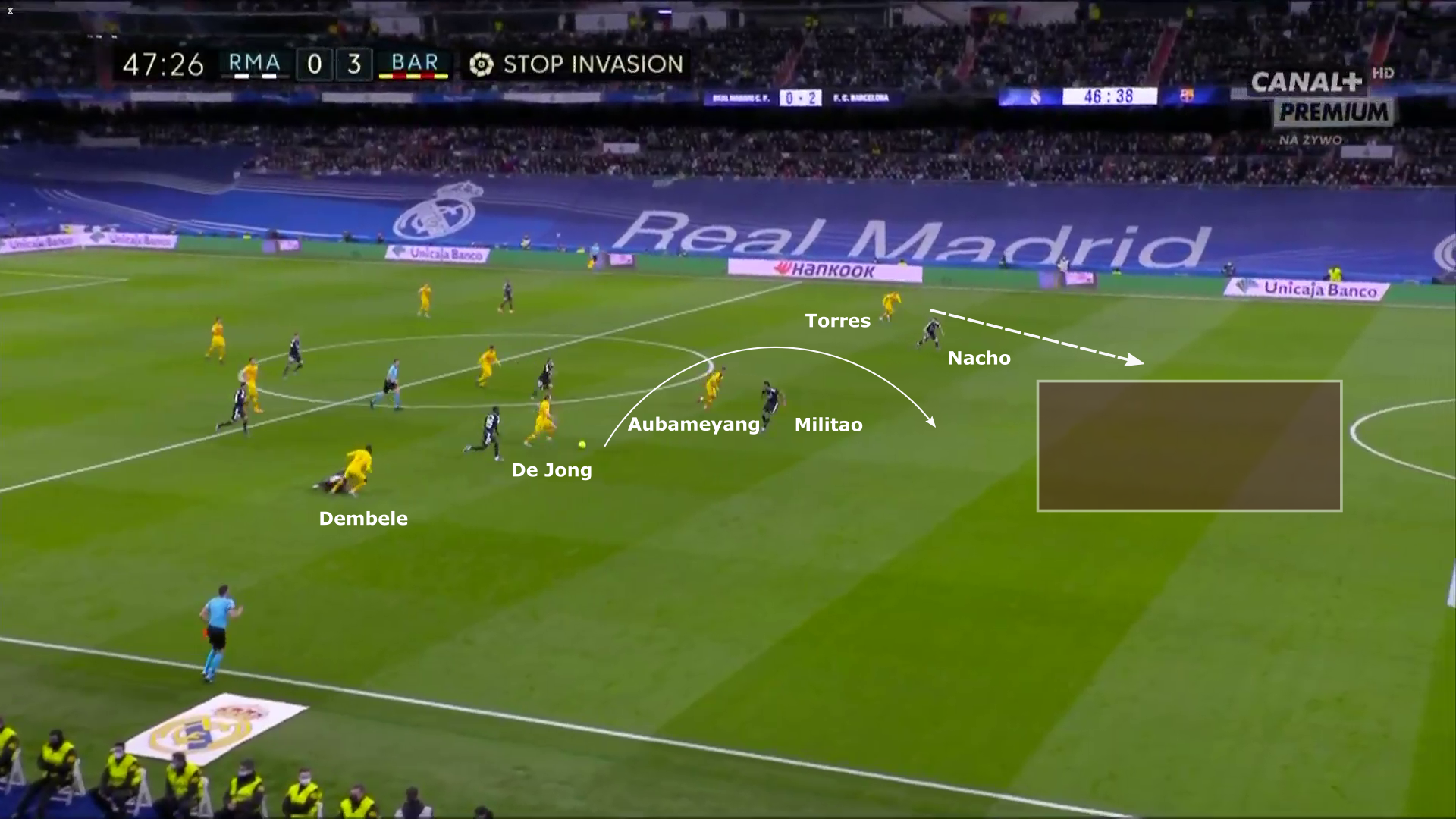 As a reaction to going further behind, Ancelotti moved from a shaky back three to a shaky back four. Nacho at right-back, Alaba at left-back and either Casemiro or Camavinga dropping at center-back. However, the problems persisted with Barca scoring the 4th goal to kill the game in the 51st minute. (analysis in next section)

Real Madrid had no answer to Barcelona’s style of football, both offensively and defensively.

Barcelona set up in a 4-3-3 in possession, coming up against a Madrid team in a 4-4-2 defensive block. Torres moved more centrally to link up with Auba freeing up space for the advancing Alba from the left. On the right-hand side, Araújo was deployed as a more conservative right back, wary of Vinícius’s pace on the counter-attack which was Madrid’s most dangerous form of attacking threat. Busquets was deployed as the pivot ahead of the two center-backs with Pedri and De Jong supporting through the channels. 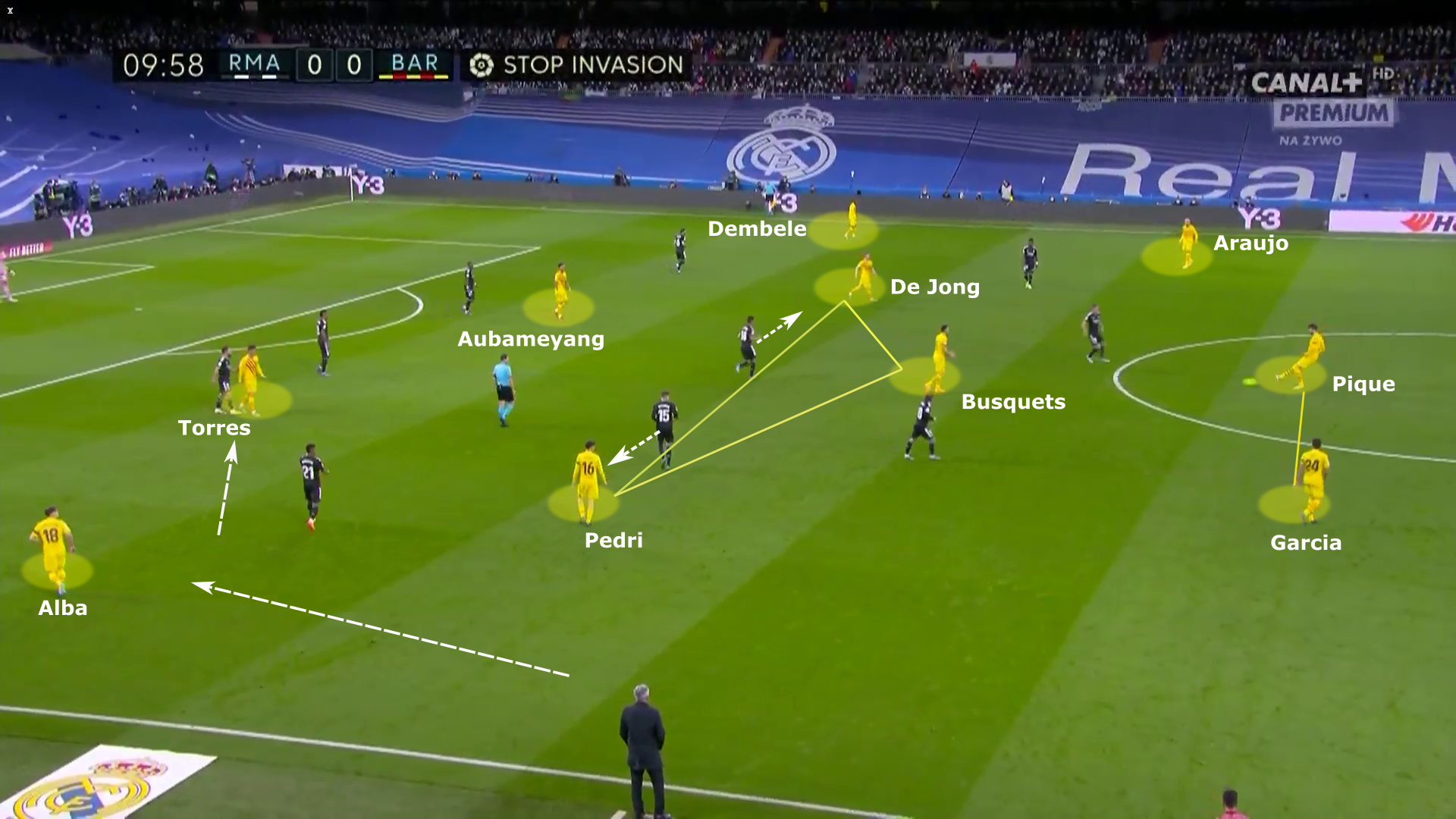 During the course of the game, we saw many inverted positions and rotations between the winger, the eight and the fullback, most prominent on the left side. The main target for Barca was to drag opponents out of position and cause misalignment in Madrid’s defensive shape. Pedri would invert positions with the winger and drop off to draw out Carvajal, creating a huge space for Torres or Alba in behind.

As we can see above, Modrić and Kroos are covering the pivot instead of pressing high but Piqué has no issues to make the pass through to Busquets. When this is successful, Barca find themselves with a numerical advantage while Casemiro and Valverde try and cover the men in the half-spaces. This enabled Barca to create a 5v4 situation in attack. If the ball was received by a player in the half-space, Madrid’s fullbacks were drawn towards him, leaving the wide winger isolated. Dembélé receives it on the right drawing Nacho into a 1v1, an area Xavi’s men detected as a weak link in Madrid’s backline. This led to a Dembélé sprint and cross which was scored for 1-0.

On other occasions, Barca would build from the left and stretch the defenders to that side. Auba would position himself between the CB and LB. Nacho is drawn towards Auba leaving Dembélé with a big space to receive Alba’s cross and drive forward. (below) 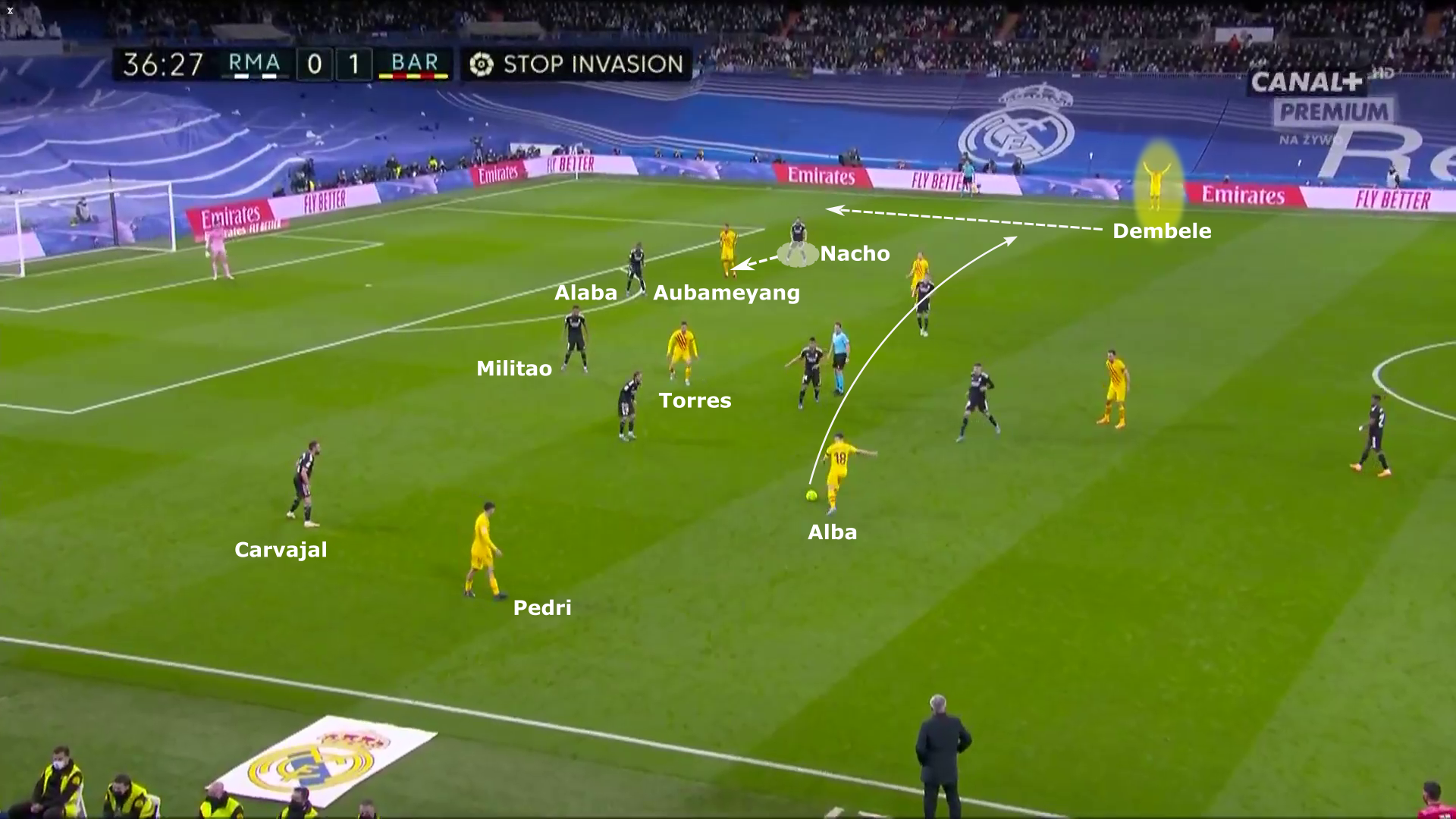 With Madrid deploying a 4-3-3 without the ball for the majority of the second half, Barcelona could no longer benefit from the central midfield overload. Aubameyang was closely followed by the two CBs and could not enjoy as much service as he did in the opening 45 minutes, forcing him to drop deep to receive the ball on several occasions. The positioning of the wingers; high and wide at the touchline, created big gaps in behind with Alaba now at LB and Nacho at RB forced to mark Dembélé and Torres tightly. Torres found joy running in behind Nacho, breaking free twice in the first five minutes of the second half alone. Piqué’s long ball reaching its target and the two new January signings linked up for Auba to tuck away the visitor’s 4th goal of the night. 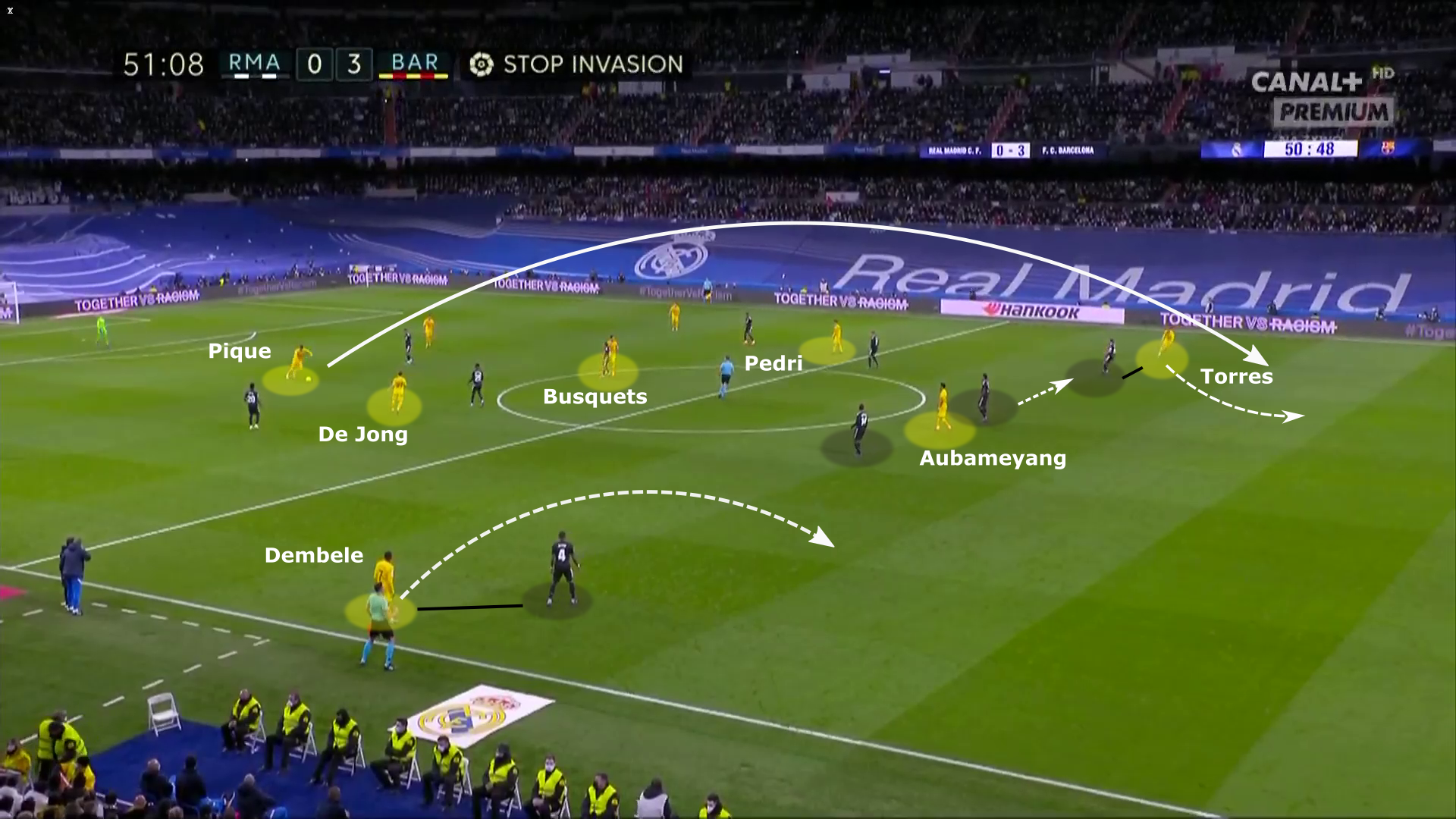 On the other hand, Barca set up in a 4-4-2 formation out of possession. With Madrid playing without a recognized striker and sometimes two false 9s, it allowed Barca to control spaces and drop-offs. Dembélé and Torres pushed out when the fullback gained possession. Pedri jumped forward to partner Auba in the first defensive line. The idea was to force Modrić/Kroos/Valverde to drop deep to receive the ball as Casemiro was closely marked. This led to Piqué and Garcia being comfortable in their respective positions with no target man to dismantle them or stretch them back to their own goal. With Vinícius having a quiet game and Araújo maintaining his defensive balance and discipline, Barca found it relatively straightforward to deal with Madrid’s attacks. The role of Busquets

Barca implemented a 2-2 structure when pressing high in the final third, with Pedri and De Jong strongly involved. In most cases, Busquets initiated the pressing phase by marching up the pitch to close passing lanes to Valverde. De Jong man marks Casemiro, Pedri and Auba make diagonal runs in Courtois’ direction while also putting pressure on the CBs. 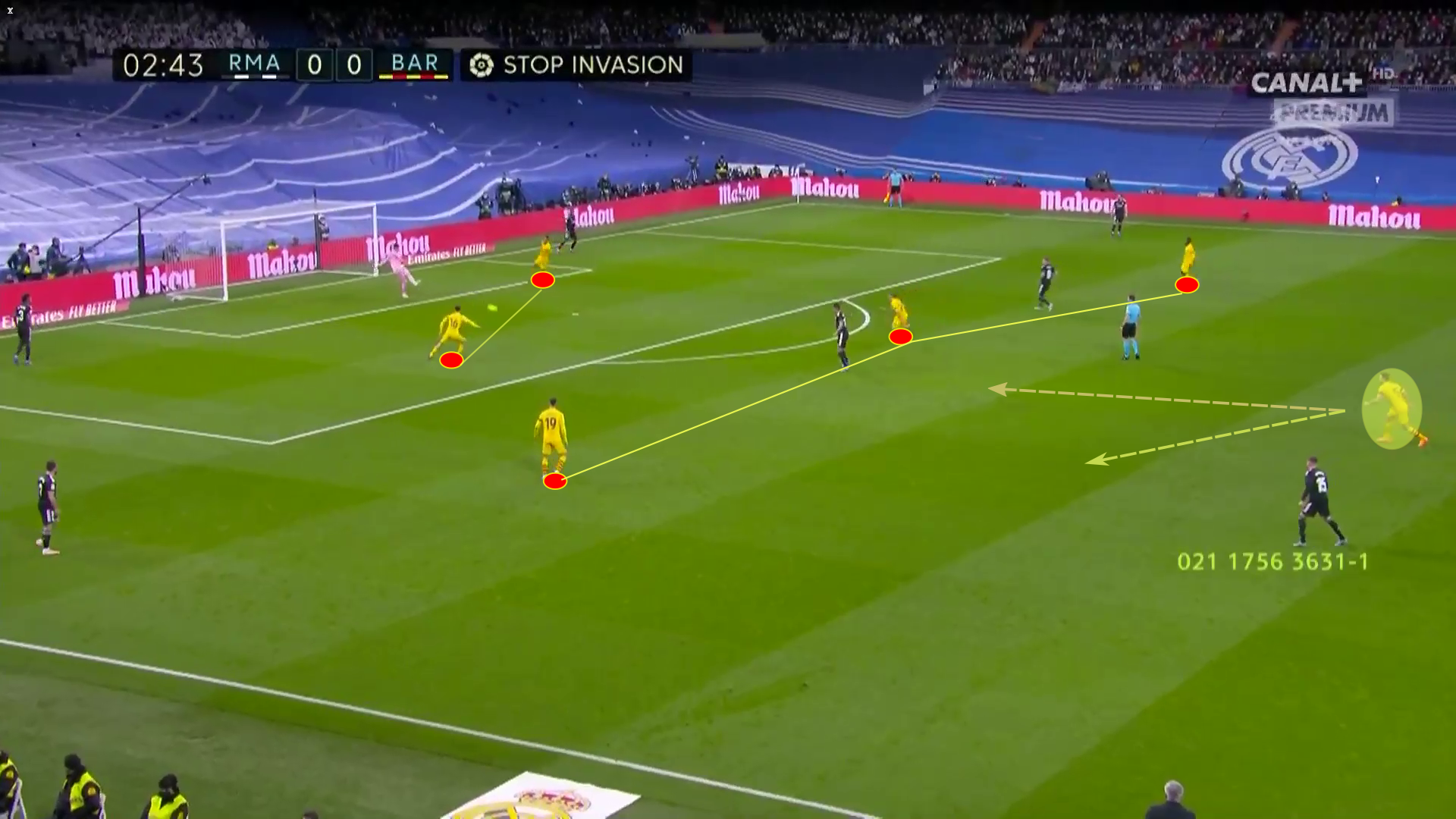 This structure proved to be very efficient in nullifying the passing angles of the ball carrier of Madrid – Carvajal in this case – forcing him to pass the ball to Modrić who is under pressure inside the Barca press. 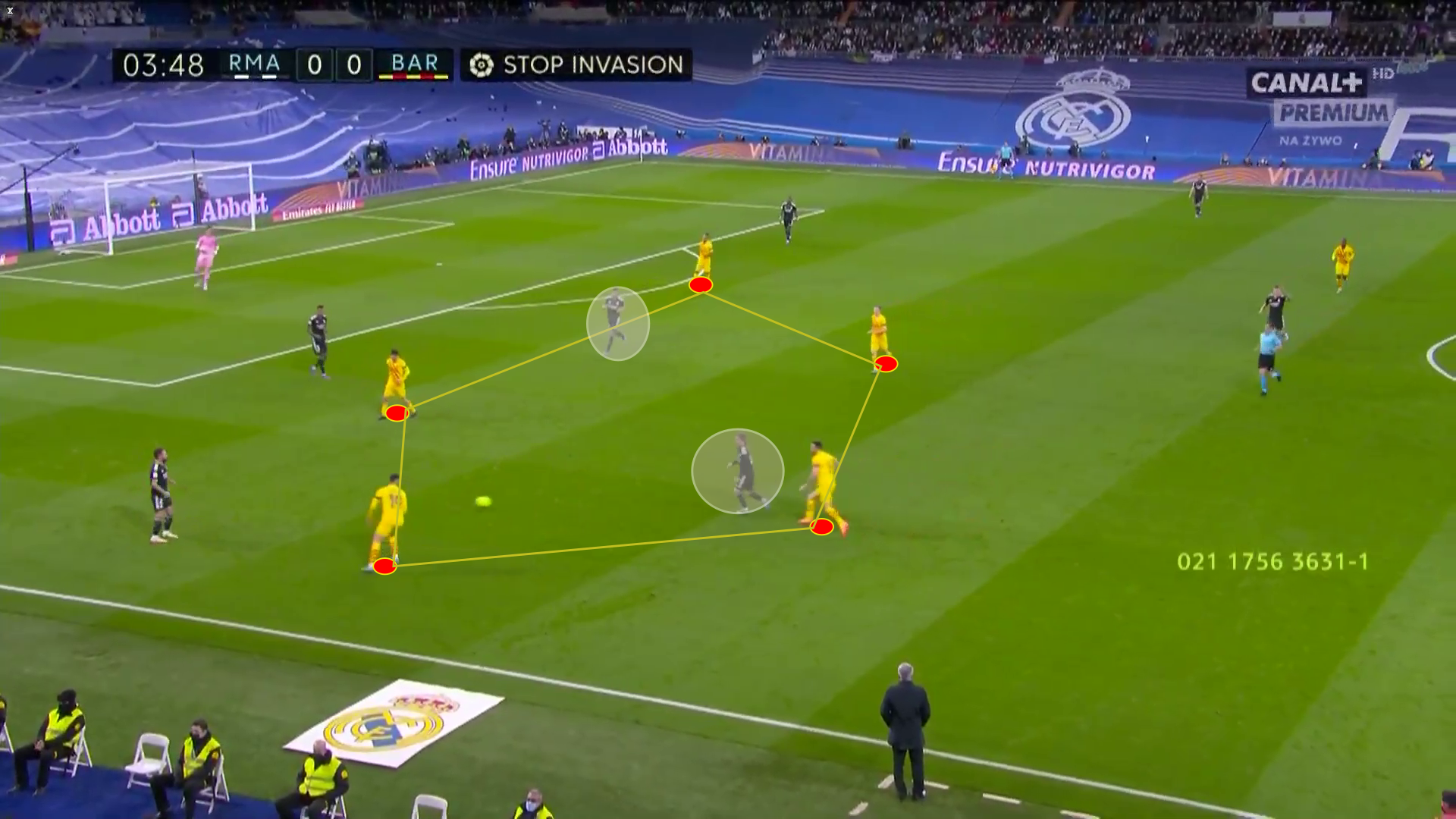 Also, Busquets helped Barca to control possession and move the ball forwards smartly. He always seems to be in the right place at the right time and never under too much pressure. During the game, Busquets was totally in control of the distance between himself and his opponents, particularly Casemiro, facilitating Barca’s build-up play. Moreover, his positioning and movements always had a purpose, mostly to try and free up De Jong further up the field as shown below. As he receives the ball from Piqué, a triangle could be created between Araújo, Dembélé and De Jong with the latter being in acres of space to collect the ball. 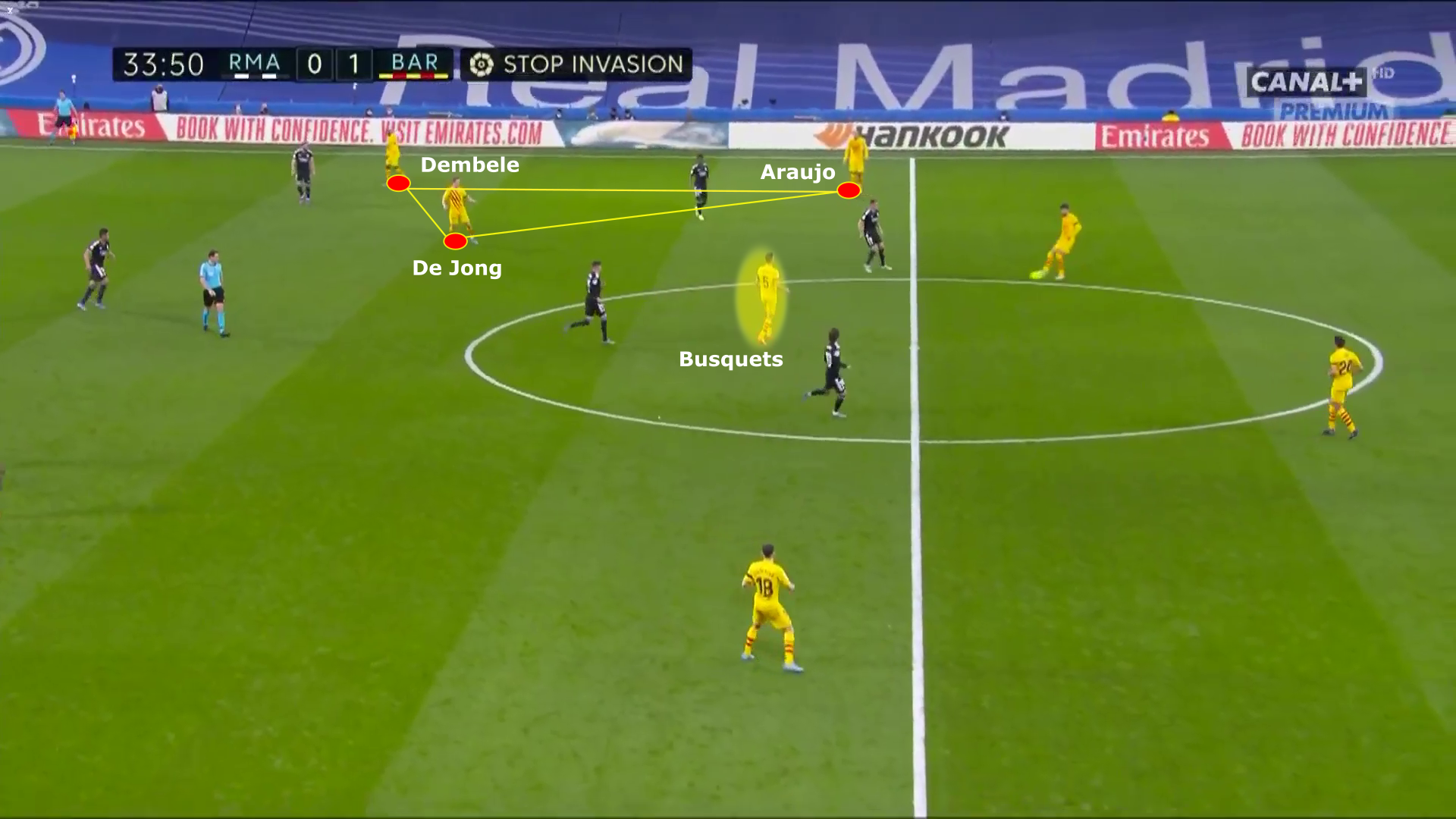 As the first half developed, Barca realized they can start playing through the center of the pitch without depending on the wide build-up play. With Madrid defending in a 4-4-2, Barca had a three vs two overload in midfield. As can be seen in the below image, Busquets draws Casemiro in while Pedri drifts wider to drag Valverde out, creating another huge gap for De Jong to exploit. The hosts found it difficult to cope defensively, with the fullbacks marking their direct opponent and Aubameyang’s movement towards the left channel stopping Alaba from pulling out to press De Jong. Busquets managed to take advantage of Pedri’s and De Jong’s movements in the half-spaces, liberating the passing lanes from the fullbacks to himself. He consistently adapted his positioning based on Madrid’s pressing structure to end up in the ideal situation to receive the ball and break the opponent’s line of pressure. 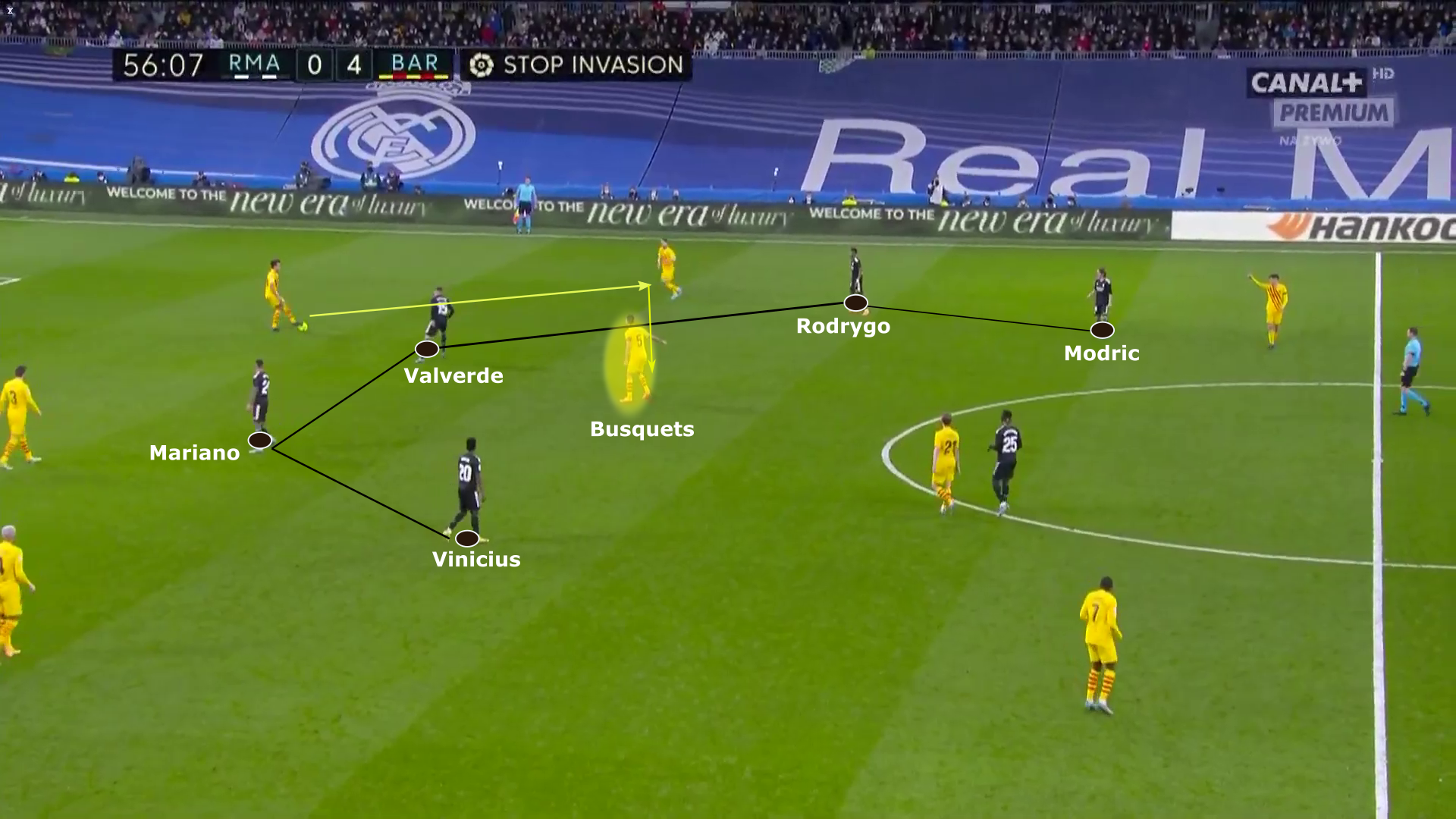 Barcelona demonstrated an emphatic display to emerge as 4-0 winners in their rival’s backyard, and some might argue the scoreline could have been worse for Madrid had it not been for some Courtois heroics. With a 12-point gap between the two teams in La Liga (Barca have a game in hand) and nine games of the season remaining, a title push is unlikely baring a Madrid collapse in the final two months. There is no debating the difference Xavi has made since his arrival, with this win definitely being the most impressive and complete performance of the season.

Barca have laid down a marker that they are on the way back to their best, with the utter domination of the league leaders being the first true sign of the post-Messi era finally kicking off.