In the eighth gameweek of the 2020-21 Premier League season, Chelsea hosted Sheffield United at Stamford Bridge. Chelsea is on the back three successive wins both in the Champions League and the league. A win would put Frank Lampard’s men within a point of the top of the table.

Sheffield United, meanwhile are without a win in 10 league games and are yet to register a win in the league this season. Chris Wilder’s men will be looking to put in a great performance after some impressive displays against Liverpool and Manchester City despite the losses. This tactical analysis focuses on the tactics deployed by both the teams. Let’s begin the analysis.

Chelsea lined up in a 4-3-3 formation that they have been using with success recently. The only change Frank Lampard made to the 3-0 win against Burnley was a forceful one with Mateo Kovacic coming in place of Kai Havertz as the German youngster missed out after being tested positive for COVID-19. 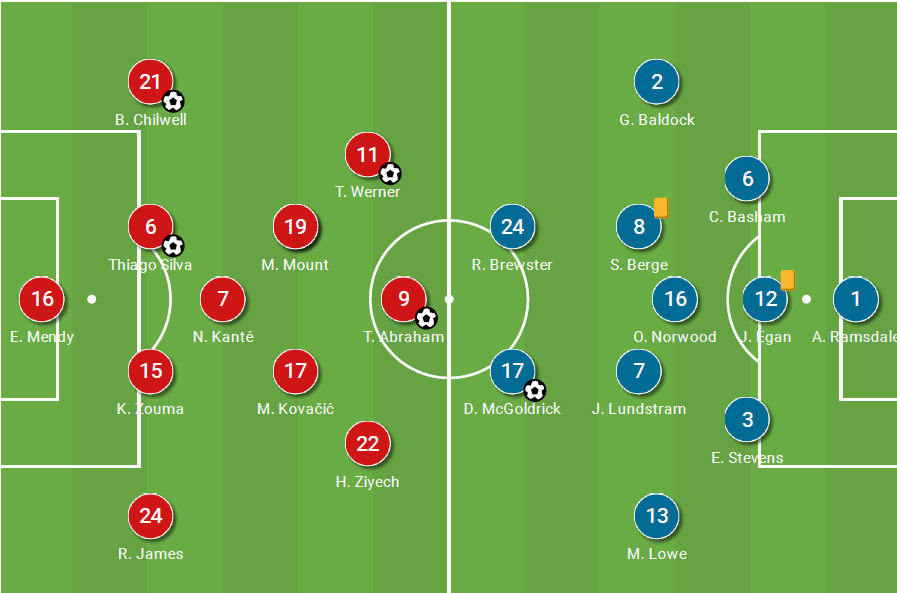 Sheffield United meanwhile made 3 changes to the lineup that lost 1-0 at home to Manchester City. David McGoldrick, Oliver Norwood, and John Lundstram were drafted into the lineup as Chris Wilder aimed to get his first league win of the season and a first PL win in 10 games.

Sheffield went with a direct form of play as they looked to not take a risk by playing out from the back against Chelsea’s press. Usually, a long ball from Aaron Ramsdale would be played to an area of the pitch where Sheffield United would have already crowded the place with their players. 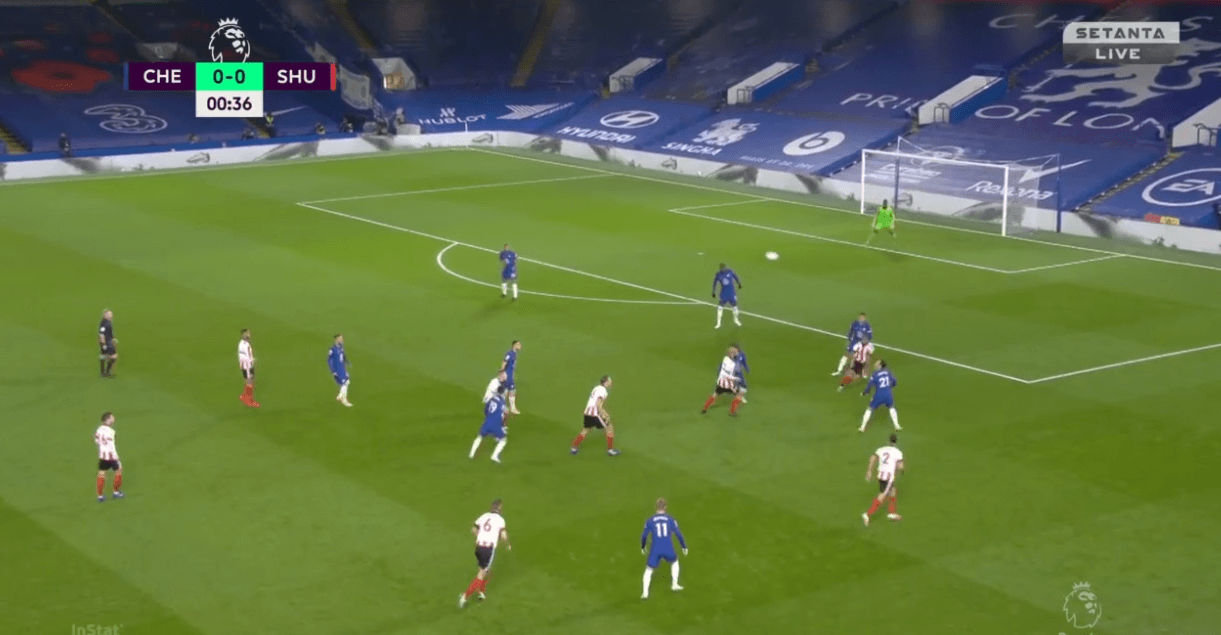 In the above image, we can see them having around 5-6 players in their right flank where the long ball from Ramsdale has been launched. From these positions, they would try to win the second balls and would immediately attack going into the final third. The interesting aspect of their play in the final third is their wide overloads and overlapping centre-backs. 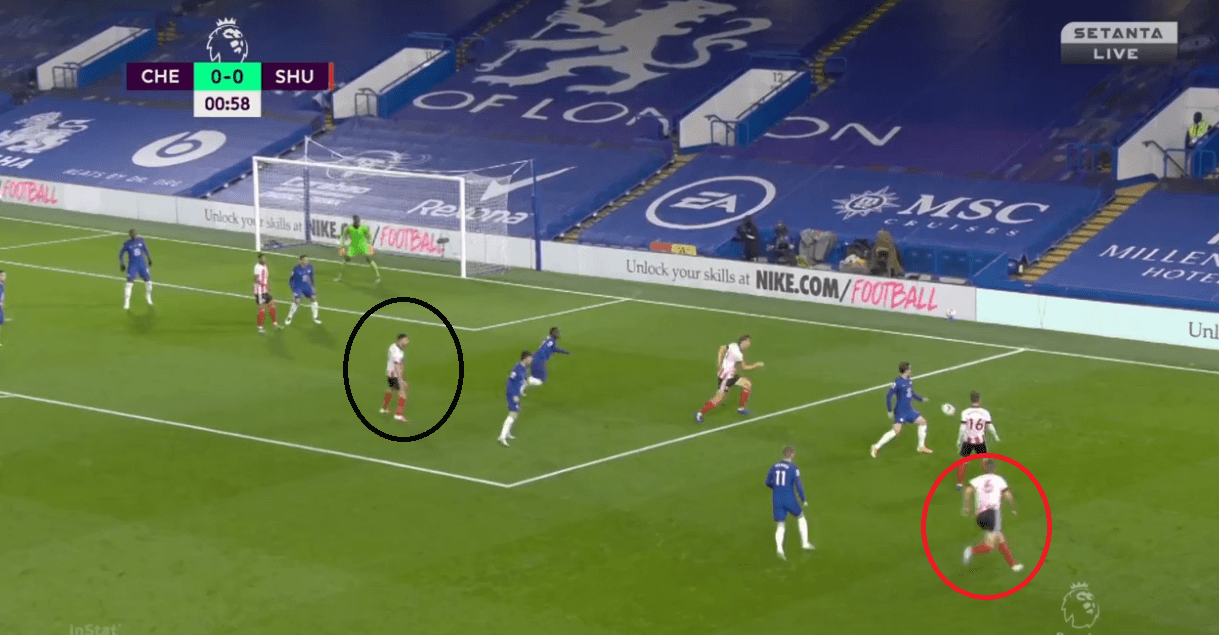 In the image above we can see Chris Basham (red circle), a right centre-back, making an overlapping run and while George Baldock (black circle), a wing-back, has underlapped and is in the penalty area. This ensures that Sheffield creates a 4 v 4 situation and despite each player being marked, it made it difficult for Chelsea due to their positional interchanges. This wide overload and the constant interchanging of position caused Chelsea huge problems in both of their matches against Sheffield last season, especially the 3-0 defeat at Bramall Lane.

Chelsea pressed high up the pitch and looked to win the ball back as every possession dominant team would do. Their off-the-ball system was also a 4-3-3 with the midfield maintaining their shape to ensure that Sheffield United do not overload that area where they themselves have a 3 man midfield. Their shape is given in the image below. 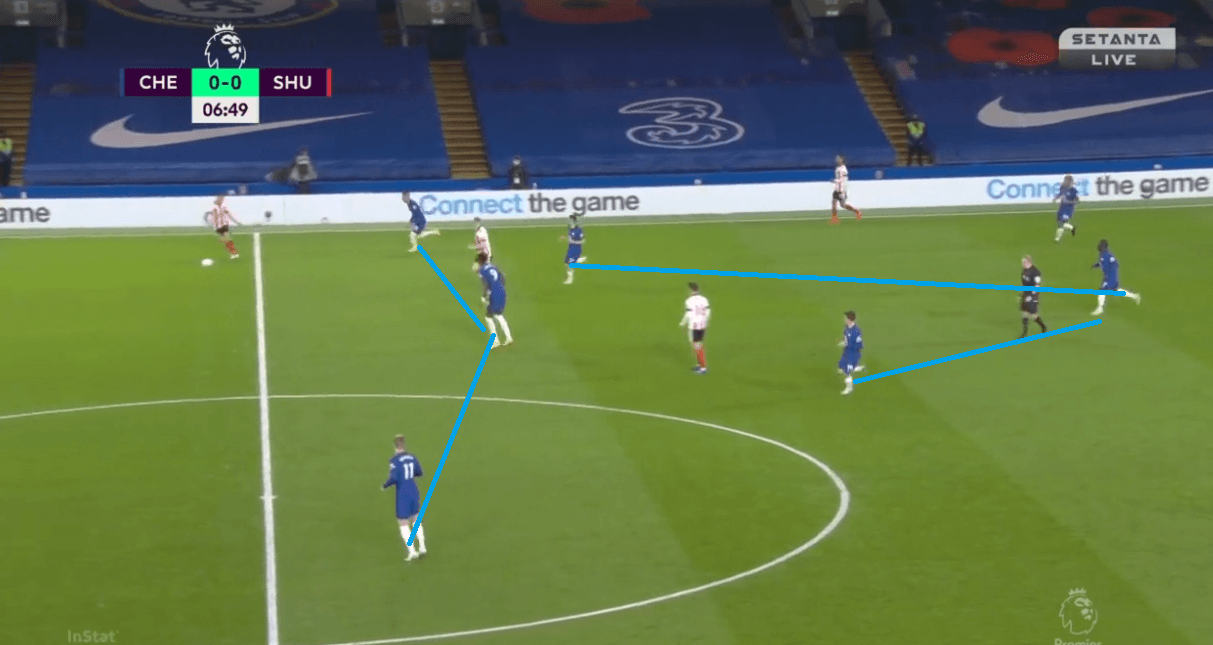 They had some issues defensively, especially in maintaining the offside line for the Sheffield players and communicating with each other. There were numerous times in the match where Sheffield players were able to stay onside as Chelsea defence were poor in setting the offside trap. In the example below, we can see the short corner that leads to the Sheffield goal. Baldock passes the ball to Norwood and both Ziyech and Kante press him while totally leaving Baldock free. Norwood returns the ball back to Baldock who is played onside by the Chelsea defence inside the box as they are very slow in reacting to the quick corner. 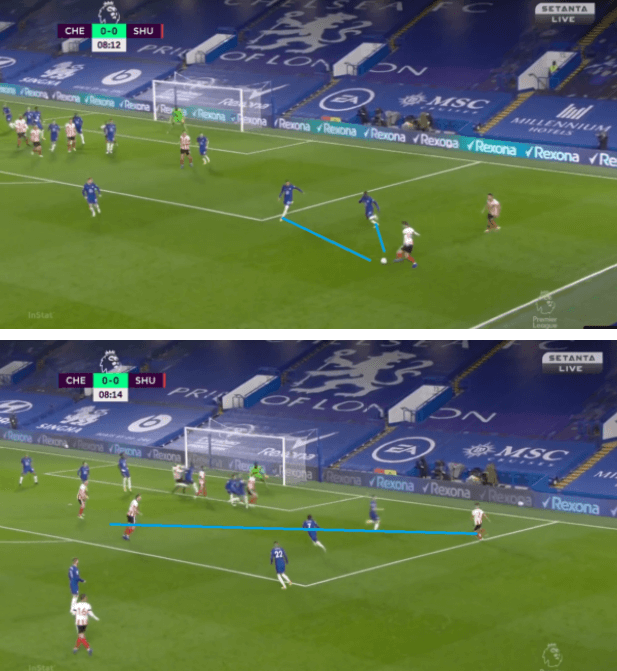 Chelsea lined up in a 4-3-3 formation as we mentioned before. They have been preferring this formation of late with Kante lying as a central defensive midfielder and with Kovacic and Mason Mount playing ahead of him as the two central midfielders. Chelsea struggled to get going in the first 10 minutes of the game. Most of that was due to their inability to swiftly progress the ball from their defence to the midfield. The prime reason for this was Kante not recognising the need to drop into the defence as the third centre-back. Despite him getting marked, Kante did not drop a lot to escape from his marker and this forced Thiago Silva and Zouma to go to the wings as the only way to move forward. 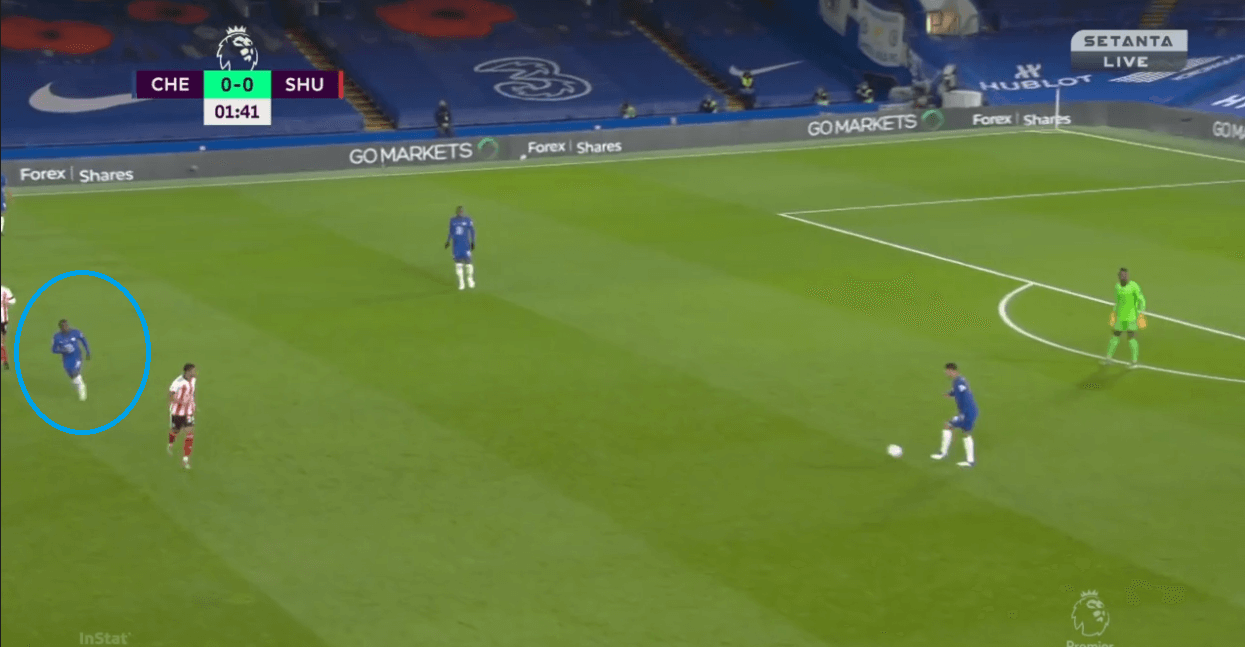 In the image above we can see Kante (blue circle) still playing ahead and a passing option to him as well as the other midfielders are halted as he fails to drop deep. Due to this, Mason Mount had to drop deep sometimes and the same happened with Kovacic at the other end to help Chelsea push forward. Therefore, Chelsea now missed the presence of those two higher up the pitch. 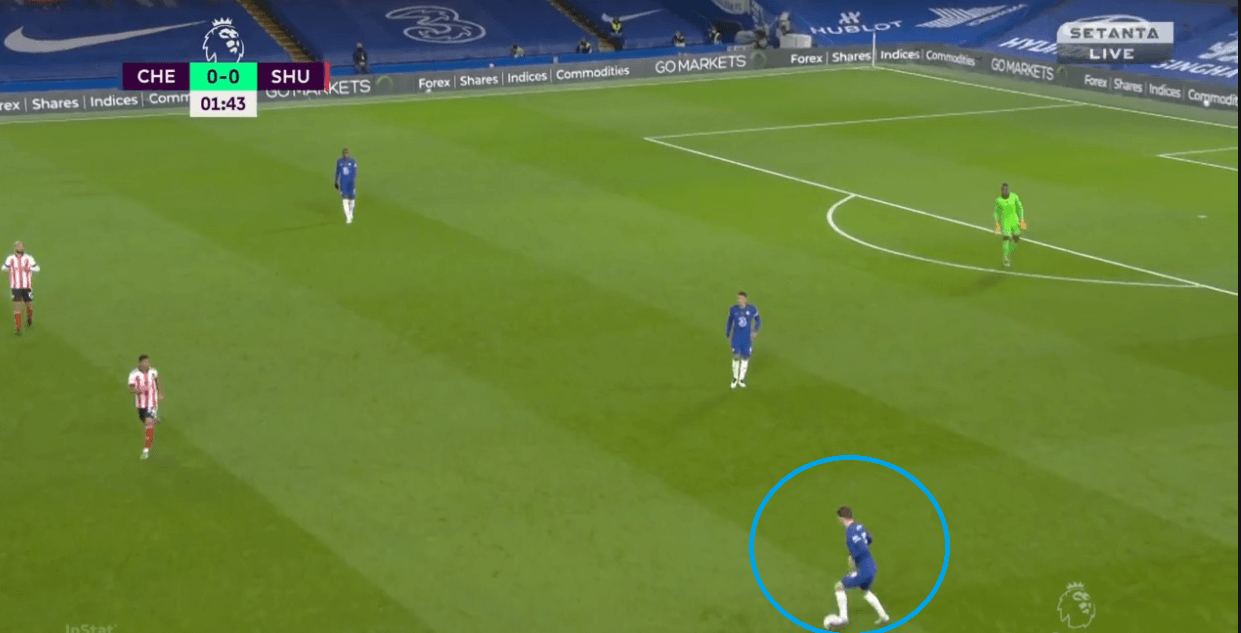 But with quality all over the pitch, Chelsea easily grew into the game and used Sheffield’s tactic of pushing them to the wings into their favour by using rotations and triangles in positional play. When they attacked and went forward, they had as many as 7 players entering into the final third of the pitch with quality. 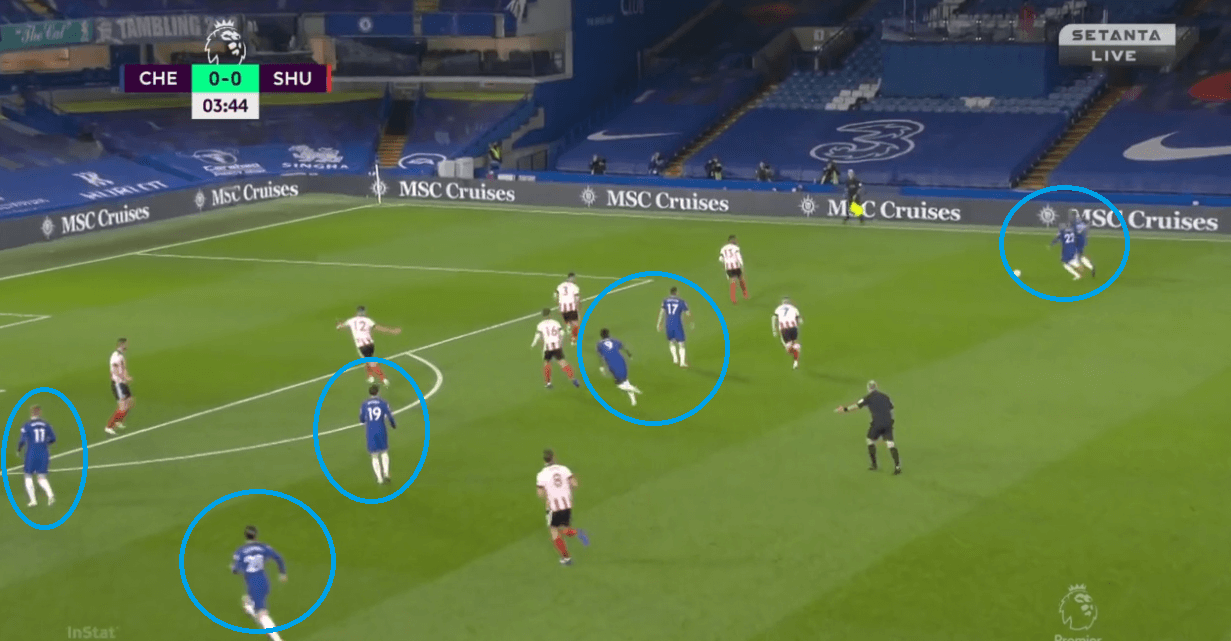 The progression for Chelsea improved when Reece James inverted to play in the midfield. He and Chilwell kept coming into the inner corridors to ensure that the two number 8s pushed higher up the pitch and made runs in between. This system is what Manchester City used in its historic 100-point season. 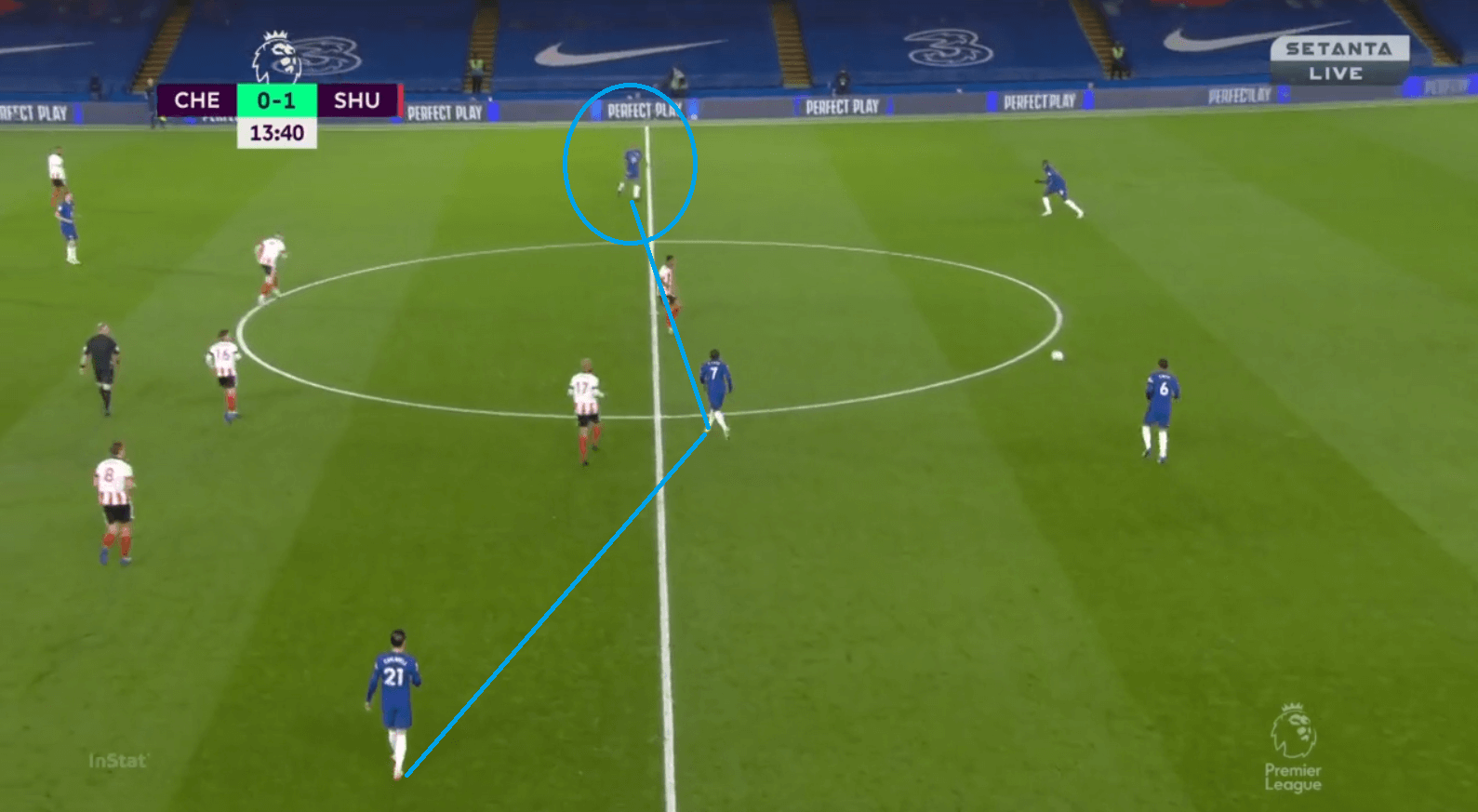 This eventually led to their equalising goal as first Reece James (black circle) invented into the midfield. Ziyech (blue circle) started out in the right wing, stayed extremely wide and stretched the defence. This is because of his ability to play pinpoint passes even from deep positions. Kovacic then made a run into the channel and Ziyech’s pass met him. Kovacic then cuts it back to Abraham who scores the goal to make it 1-1. 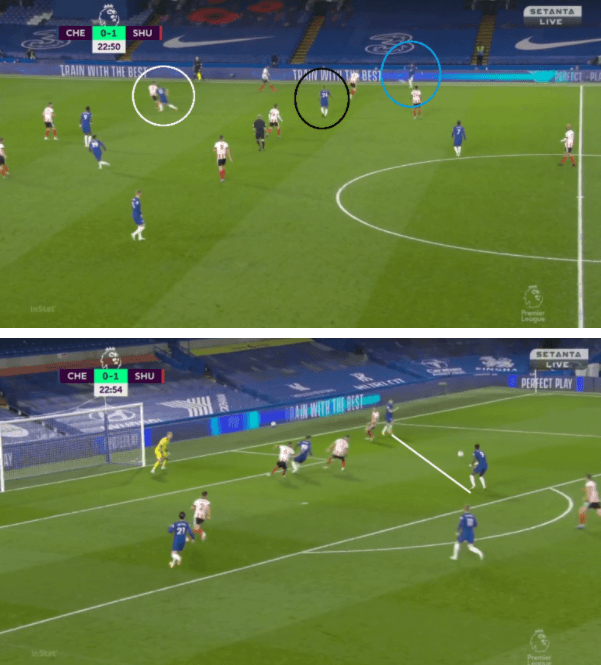 The constant interchanging of positions was too much for Sheffield to handle and Chelsea mostly created issues from their right wing with Ziyech being the chief creator. The image below shows the triangle created by Ziyech, James, and Kovacic. Here, James is currently in the wide space and Ziyech has moved to the half-space. 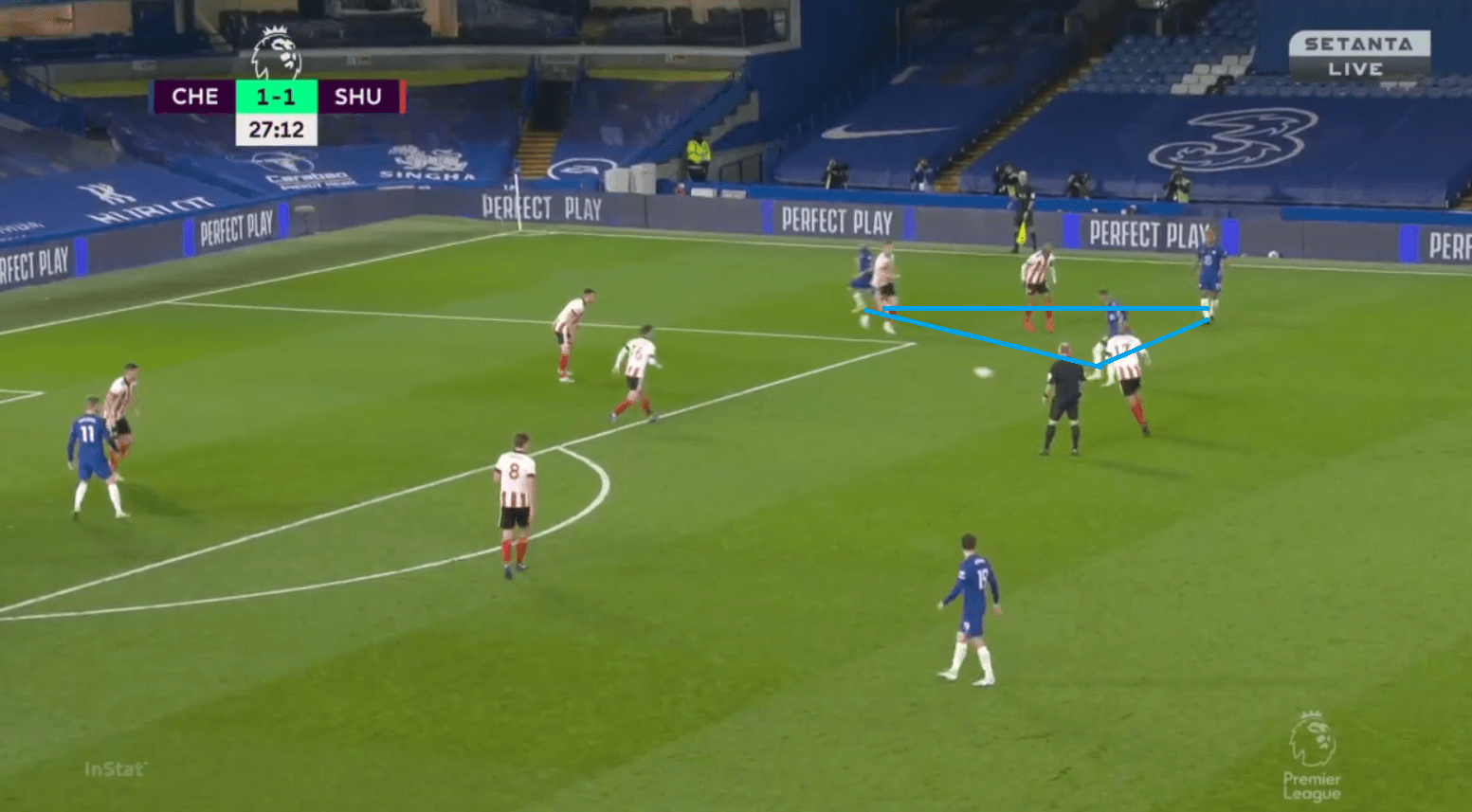 Ziyech would also switch to the opposite wings to either Chilwell (making an overlapping run) or to Werner who likes to cut inside and score goals. Sheffield eventually succumbed to this quality progression all over the pitch as the game went on.

Sheffield without possession initially sat in a mid-block and looked to cut off the passing lanes to the Chelsea midfielders. This was majorly before the first goal was scored as Sheffield looked to achieve two things: cut off passing lanes to the Chelsea midfielders and initiate pressing triggers when the ball went out to the wings. Usually, one of their centre-forwards would press the nearest centre-back while the other would closely mark Kante, Chelsea’s deepest midfielder. 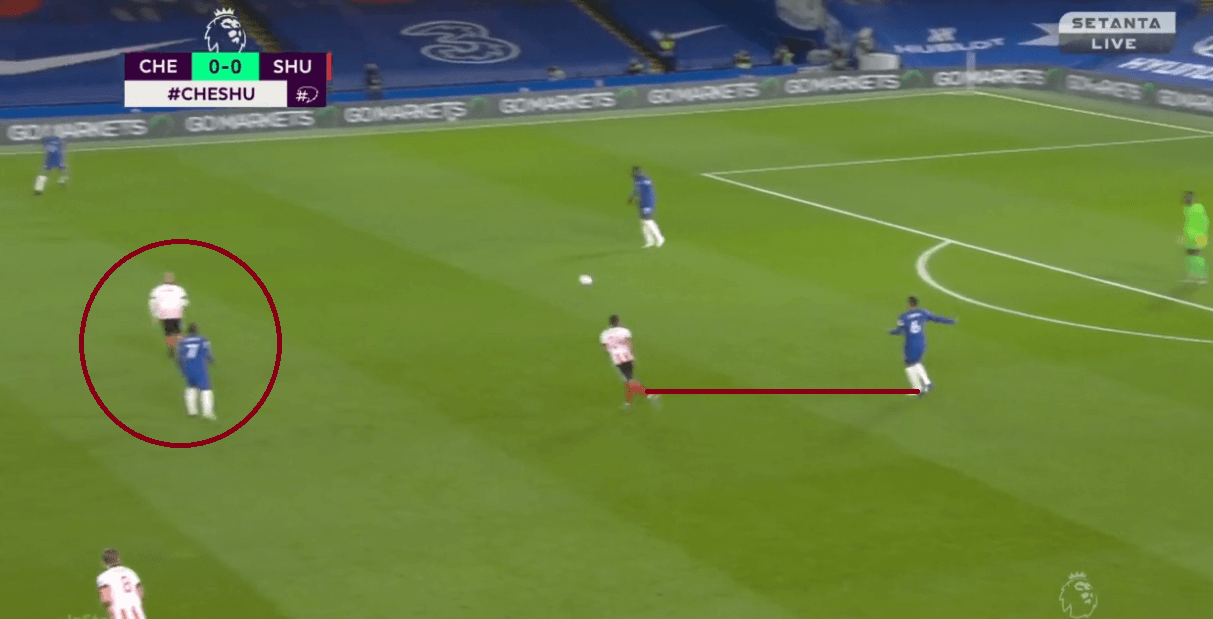 This made it difficult for Chelsea to progress the ball efficiently until Sheffield United scored their goal after which they sat back. They sat in a 5-3-2 / 5-4-1 formation after the goal. This was done to close out spaces in behind the defence that could be exploited by the likes of Werner or Tammy Abraham. So they sat deep like in the image below in a 5-3-2 formation. 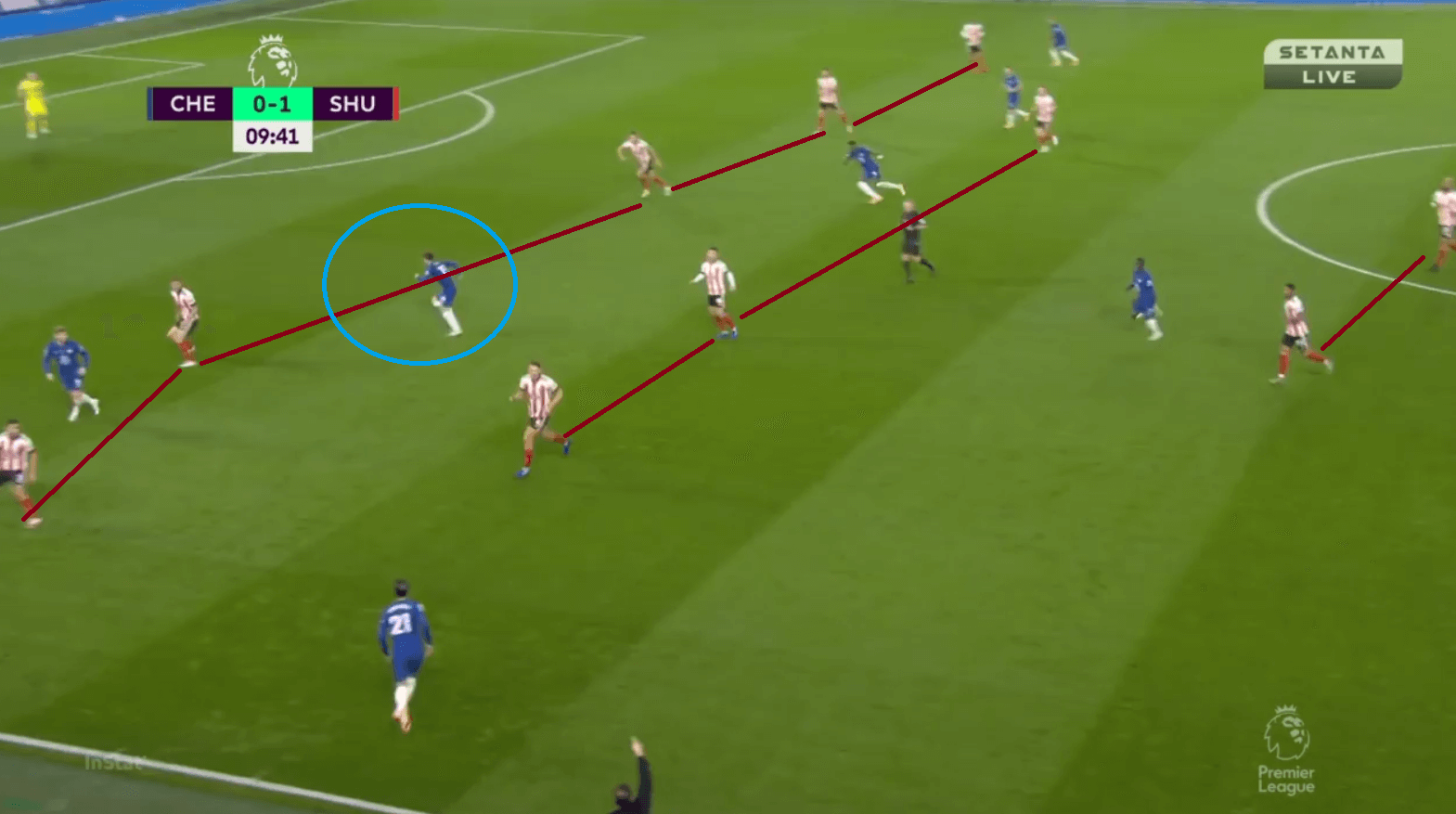 Even though they sat deep, Sheffield’s defence was stretched very easily by the Chelsea players as the game progressed. This is because of the fact that now the Chelsea players have much more time on the ball and were able to work patterns and run circles around Sheffield United. In the image above we can see that since Werner moves wide he drags Basham with him and this opens space for Mason Mount’s run into the channel which is very wide due to Basham getting dragged.

Their usual defensive setup during set-piece wasn’t visible throughout the game as Chelsea caused huge problems in this aspect. In the image below we can see at the far post, Chilwell and Werner have created a 2 v 1 overload against McGoldrick. 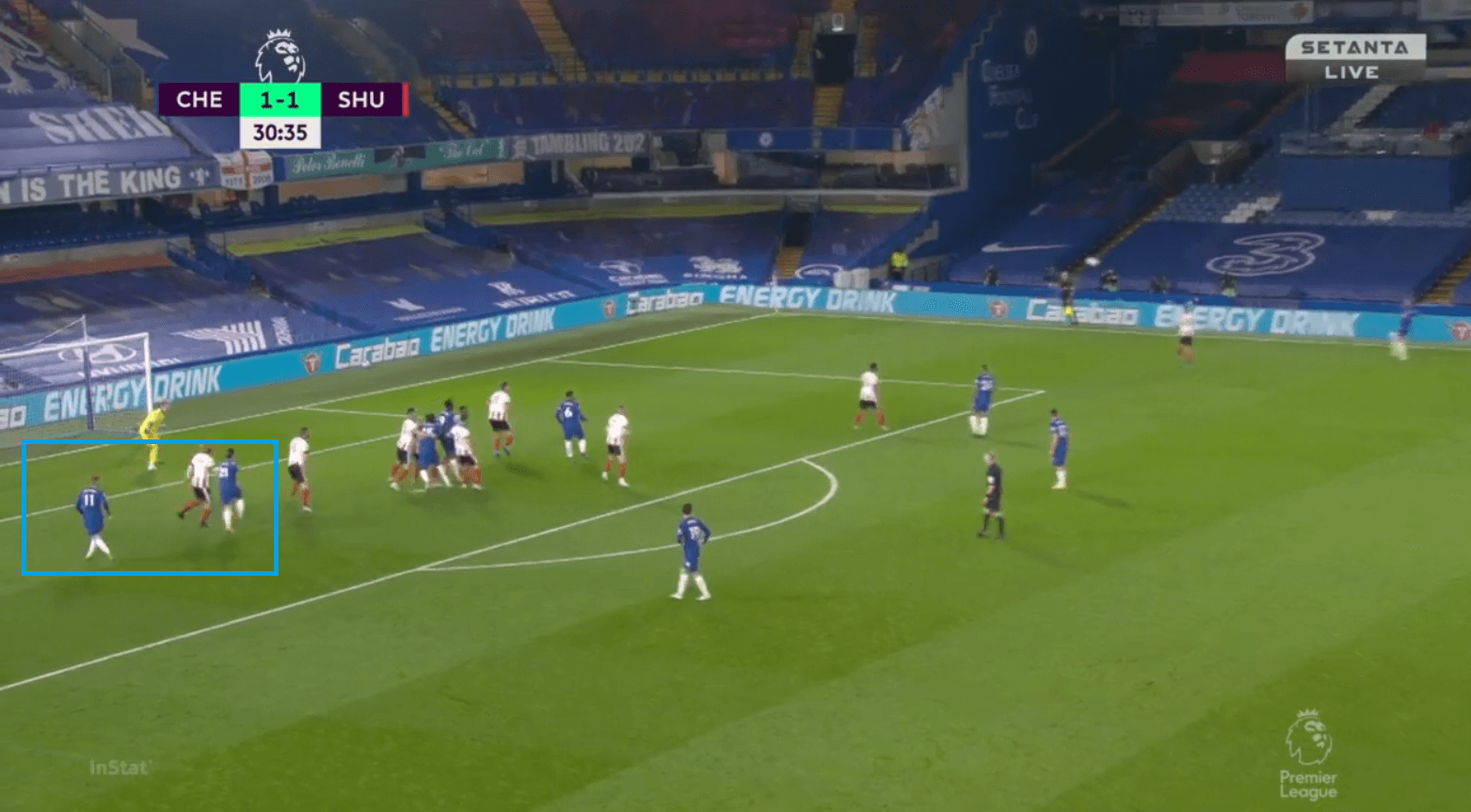 In the end, Chelsea came out as convincing winners with a scoreline of 4-1. Despite Sheffield’s great start, they were no match to Chelsea’s intensity and quality all over the pitch. The win means that Chelsea is within a point of Southampton and Liverpool (they have played a game less) at 15 points while the loss continues the winless start that Sheffield has started with this season and with just 1 point in 8 games.