Nottingham Forest went into the weekend fixture against Swansea City in high spirits. In their last fixture, they made up ground on second-placed Bournemouth with a shock 1-0 away win against soon to be champions Fulham.

Swansea went to the City Ground unbeaten in nine league games. However, the last four games of that unbeaten run all ended in draws – with Russell Martin’s team throwing away a three-goal lead in each of their previous two games.

In what was being anticipated to be a close match beforehand, it was Forest who ran riot in this match producing a stunning 5-1 victory.

This tactical analysis will focus on the key tactics set by Steve Cooper and how they helped shape the result and performance of Nottingham Forest. 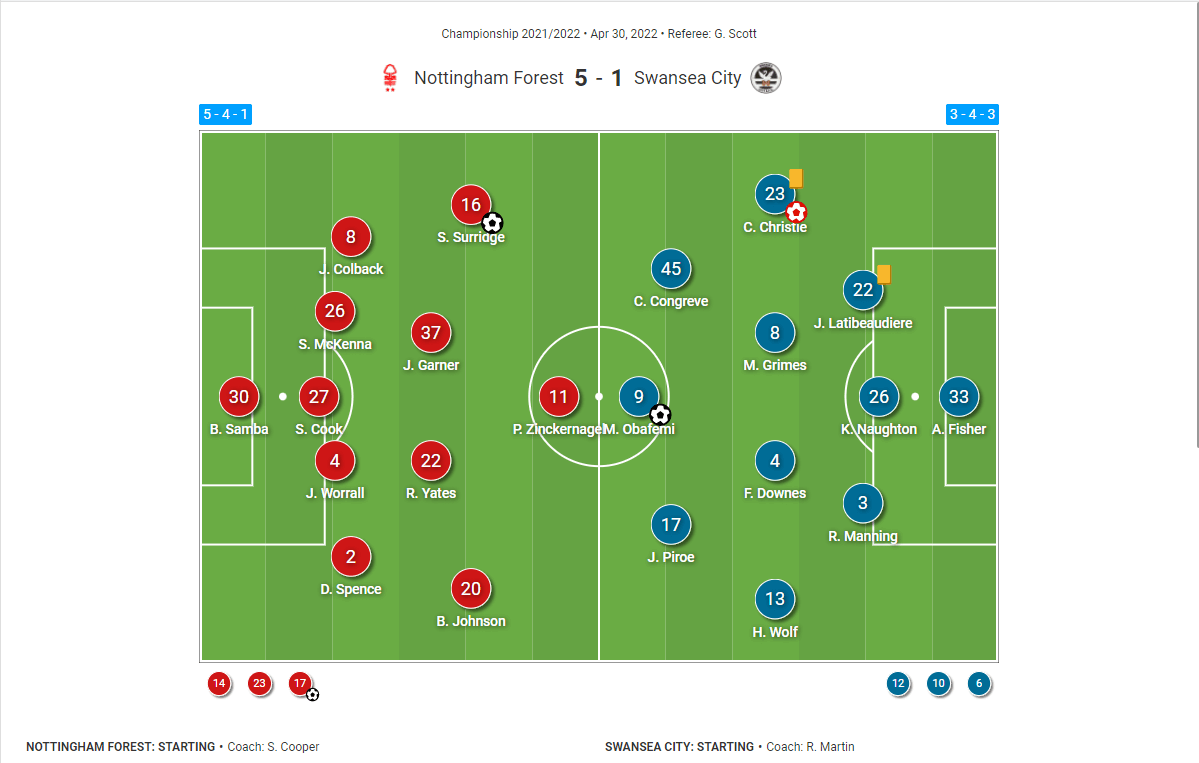 In what was a must-win game for Forest. Steve Cooper opted for the same starting eleven as he did against Fulham. With Lewis Grabban, Keinan Davis and Max Lowe all remaining out injured.

Swansea City were forced into making one change after Ben Cabango suffered an injury against Bournemouth. His absence saw Ryan Manning drop into the back three with Korey Smith dropping to the substitutions bench.

Swansea switched back to the 3-4-2-1 formation they have used for most of this season. In their last game against Bournemouth, Russel Martin used a 4-2-3-1. Given how easy Bournemouth played through Swansea in the second half of that game, it is clear that Swansea are far more comfortable and more difficult to beat when playing a 3-4-2-1 system

Right from the start of the match, Nottingham Forest was able to implement a solid defensive structure through each third of the pitch. Their 5-2-3 block enabled them to press high with five players when needed. Whilst also enabling them to keep a narrow compact shape behind the ball. With five players blocking the centre of the pitch.

This is how Forest looked to position themselves against the ball in each third of the pitch. 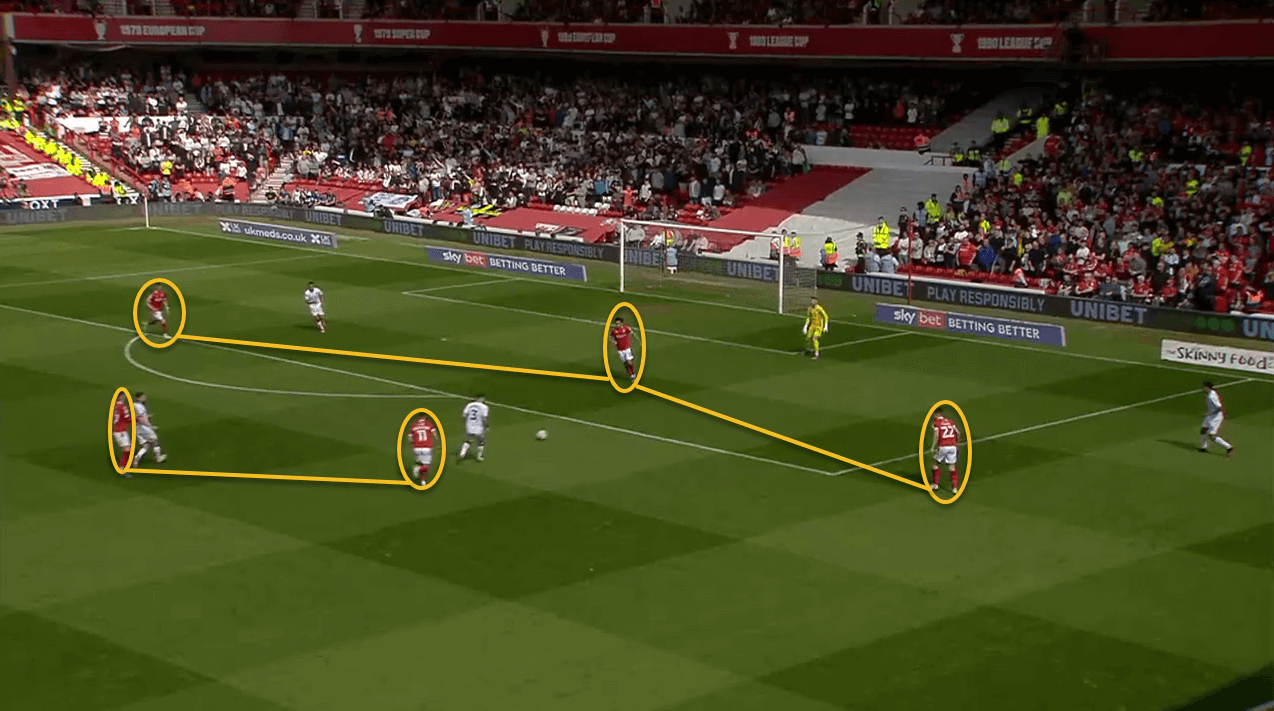 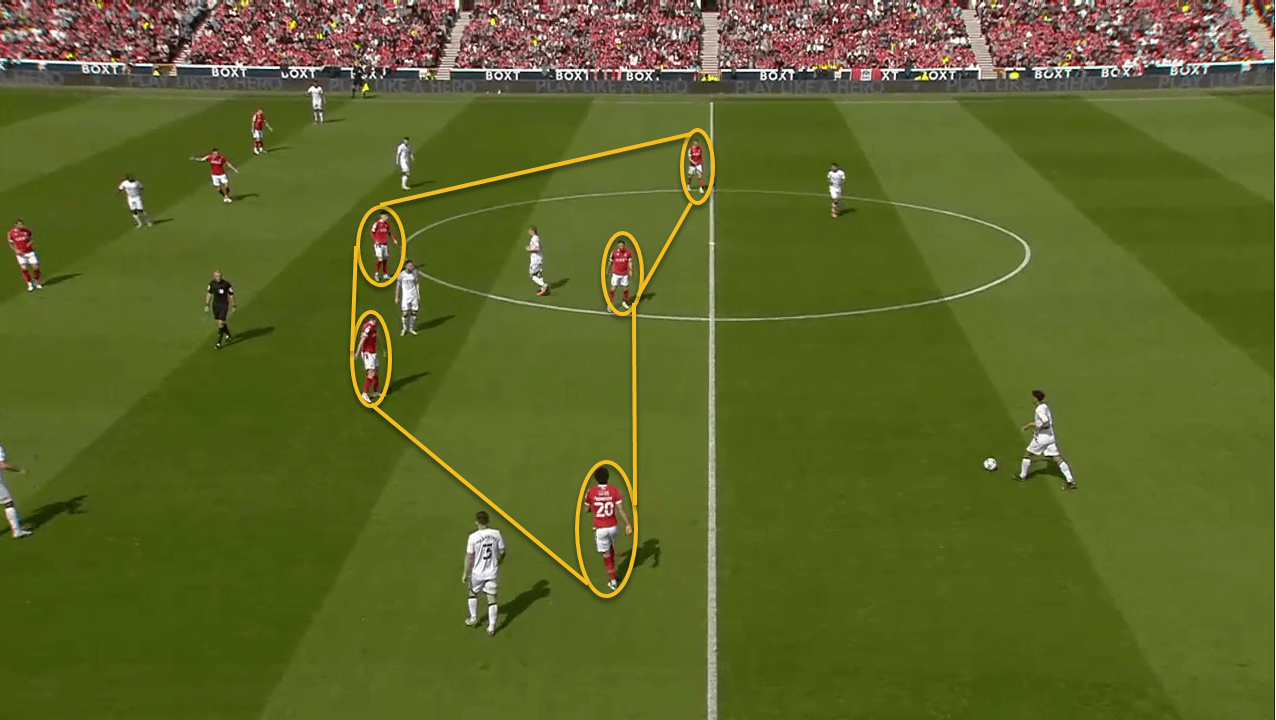 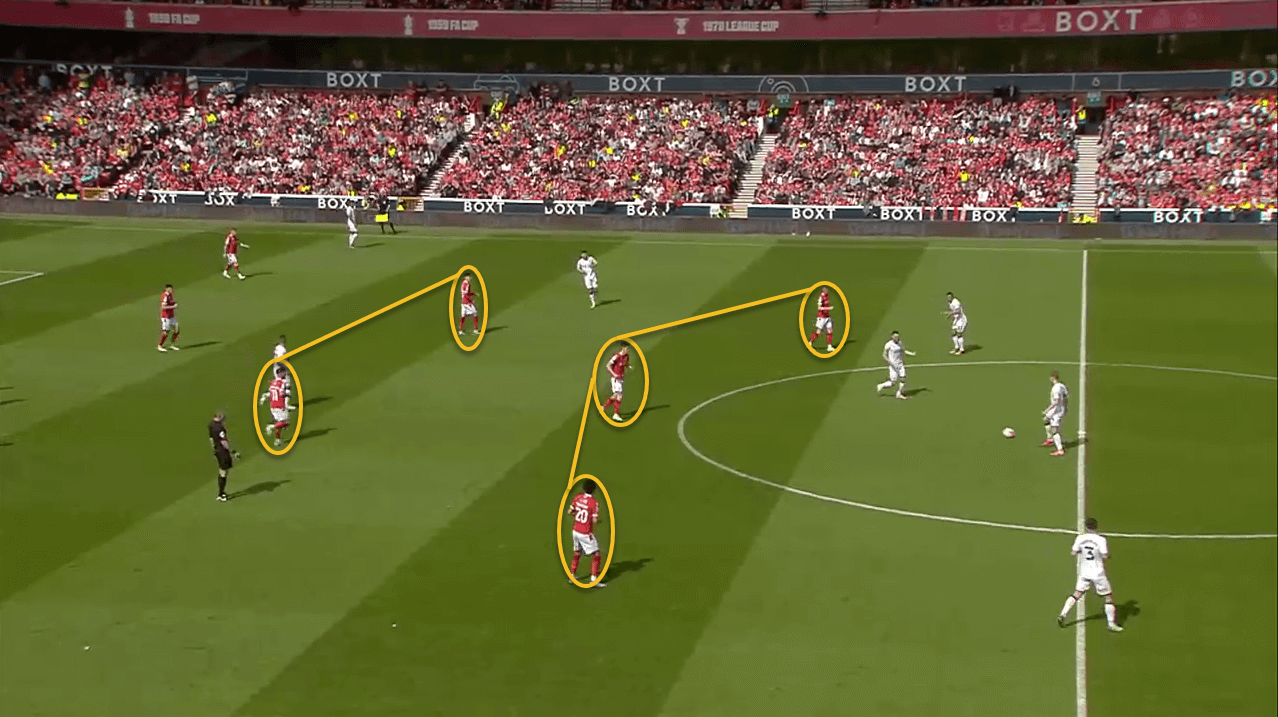 This held Swansea throughout the game. It stopped them from building through their defence and playing through each third of the pitch. Inevitably it forced them into longs balls.

During their build-up phase, Swansea look to build up through their double pivot. In this game, it was Matt Grimes and Flynn Downes, but Forest pressing in a 2-3 structure disrupted this.

To counter this structure Swansea’s front players Joël Piroe and Cameron Congreve started to drop deeper and come looking for the ball. The idea behind this was for Swansea to start creating overloads. However, when this happened Forest would switch their 5-2-3 block to 5-3-2 block and matched them numerically. 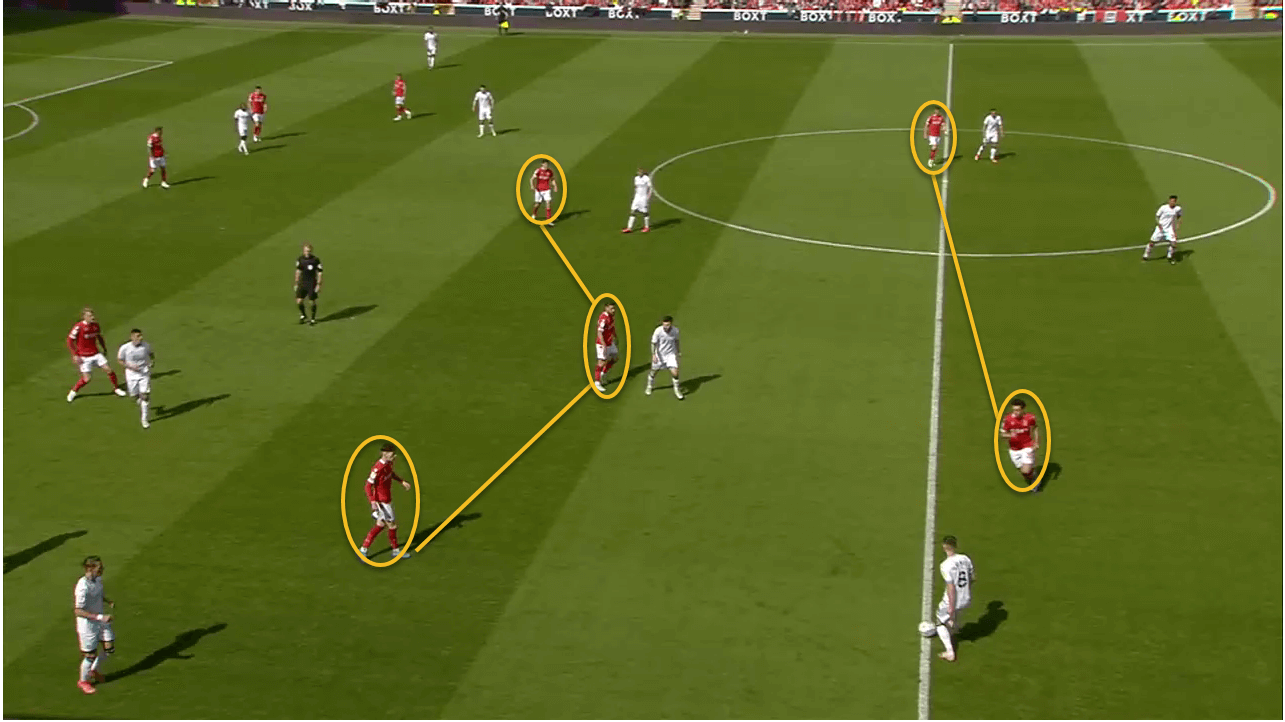 Forest’s ability to draw Swansea onto them and force them into specific areas, and then counterattack is what changed the game in the second half.

As you can see in this image. This passage of play starts with Swansea holding possession on the left-hand side of Forest’s penalty area. Once Forest win the ball back, James Garner breaks putting Forest in a 3v3 counter-attack. 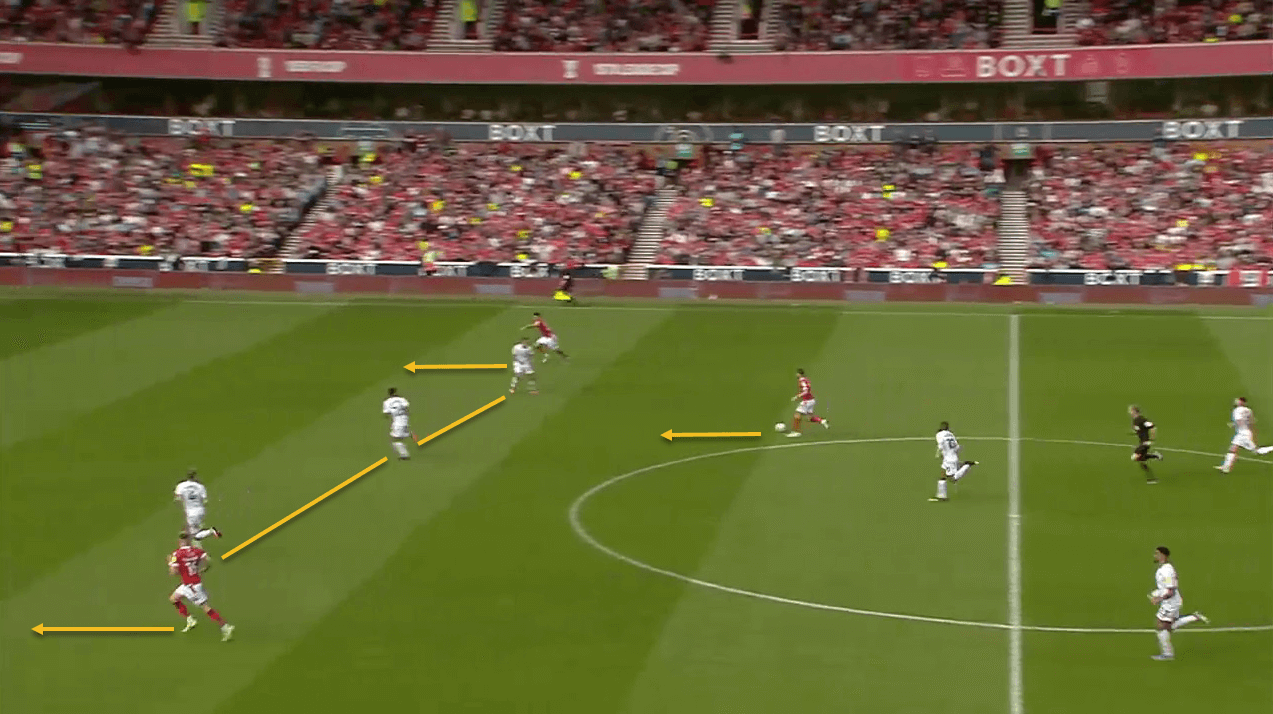 Swansea are a team that likes to keep possession. They have averaged the highest amount of possession in the Championship this season with 64%. What caught Swansea off guard in this match was, how much of the ball Forest allowed them to keep.

Swansea finished the game with 70% possession and Forest had 30%. This fitted how Steve Cooper wanted to approach the game tactically.

Although Swansea held more possession, it was Forest who controlled the game by dictating the areas and space that Swansea was able to play through. The tactics worked perfectly because Swansea kept committing players forward.

Look at this example below. Swansea has eight players committed in the Forest half of the pitch, with their full-back Cyrus Christie being out of position. When Forest regain possession in this area they immediately attack the space highlighted behind Sam Surridge. 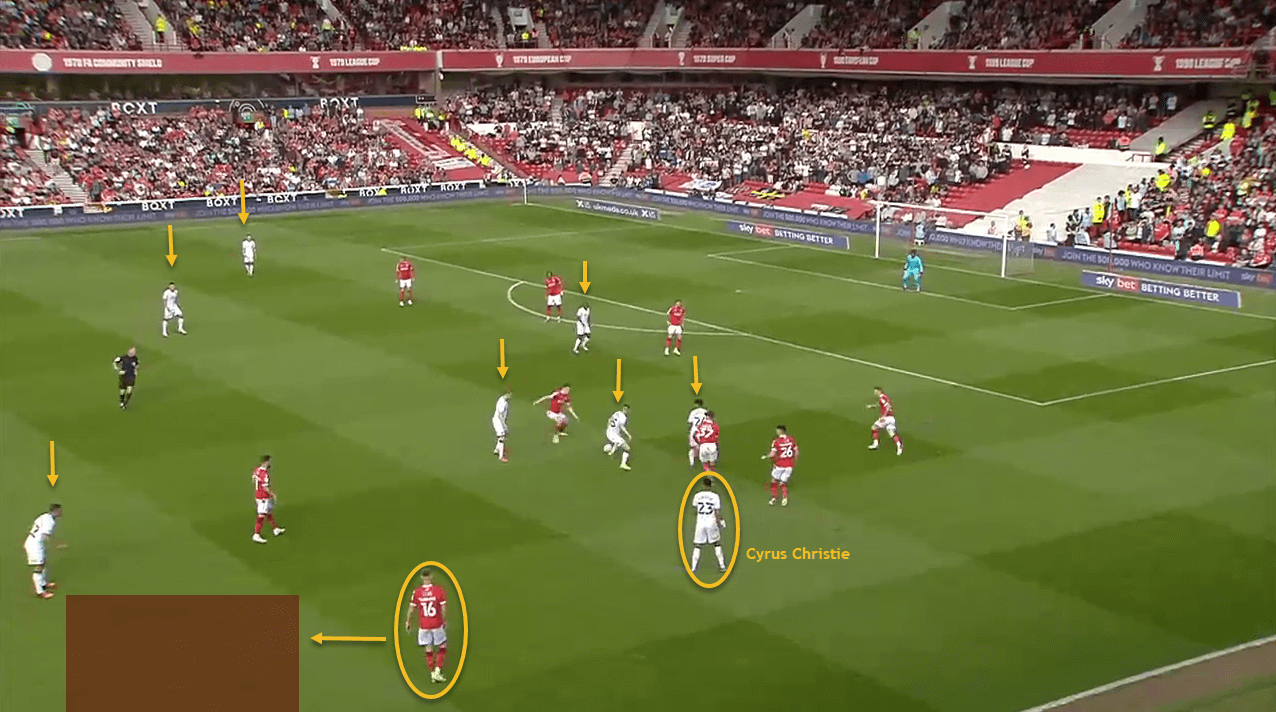 At every opportunity, Forest kept attacking the space in the wide areas and in behind Swansea’s midfield.

If a team attacks with no real attacking shape or pattern like Swansea did. It makes a transition from attack to defence more difficult. This was certainly the case with Swansea in the second half and Forest took full advantage.

Here is Sam Surridge’s second goal and Forest’s third. Swansea had just switched their formation to a 4-2-3-1. The purpose of this was to get more support in the wide areas from the full-backs.

However, when Forest won the ball back on the edge of the penalty area, they are able to counter-attack with a 4v2 against Swansea’s centre backs. 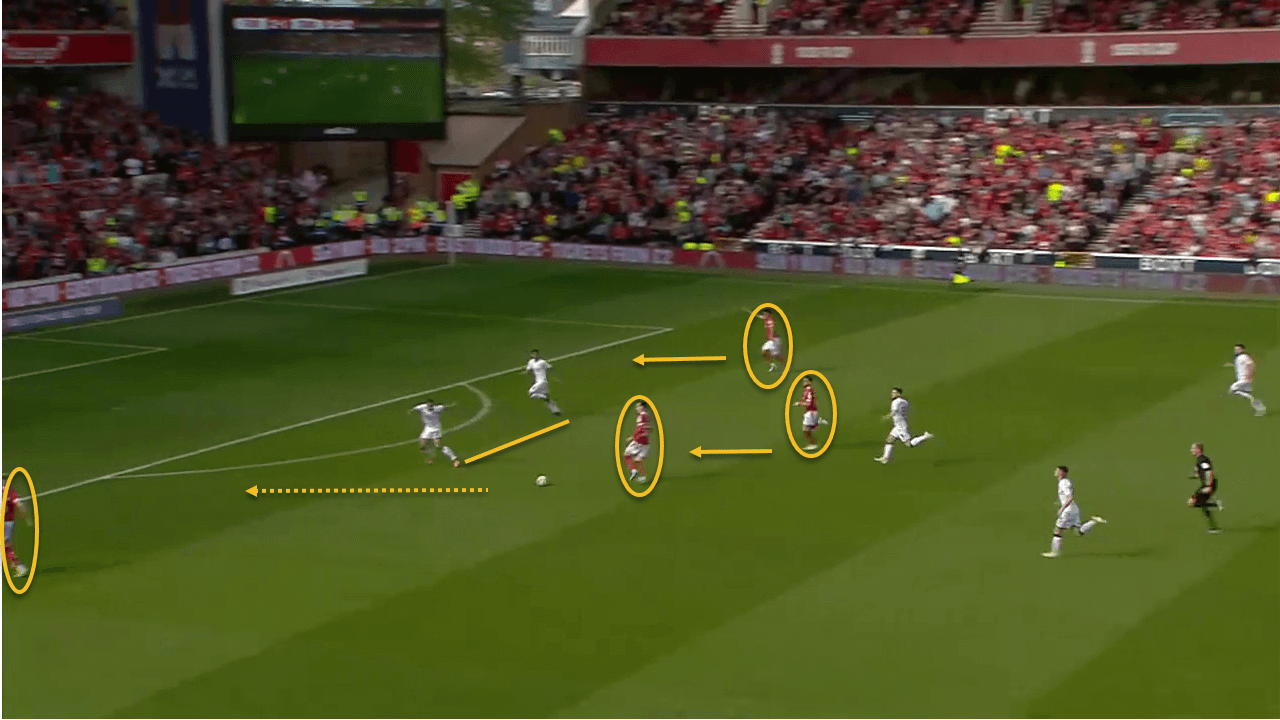 It was Forest’s movement and build-up play through the wide areas that caused Swansea problems after their formation switch.

The positions that Djed Spence and Jack Colback were taking up were particularly good at providing Forest with width. Even if they weren’t brought into the play, the positions they held stretched Swansea and created more space centrally.

You can see the areas of space that Djed Spence is looking to attack. His run during this attack acts as a decoy, creating more space for Philip Zinckernagel who is carrying the ball. 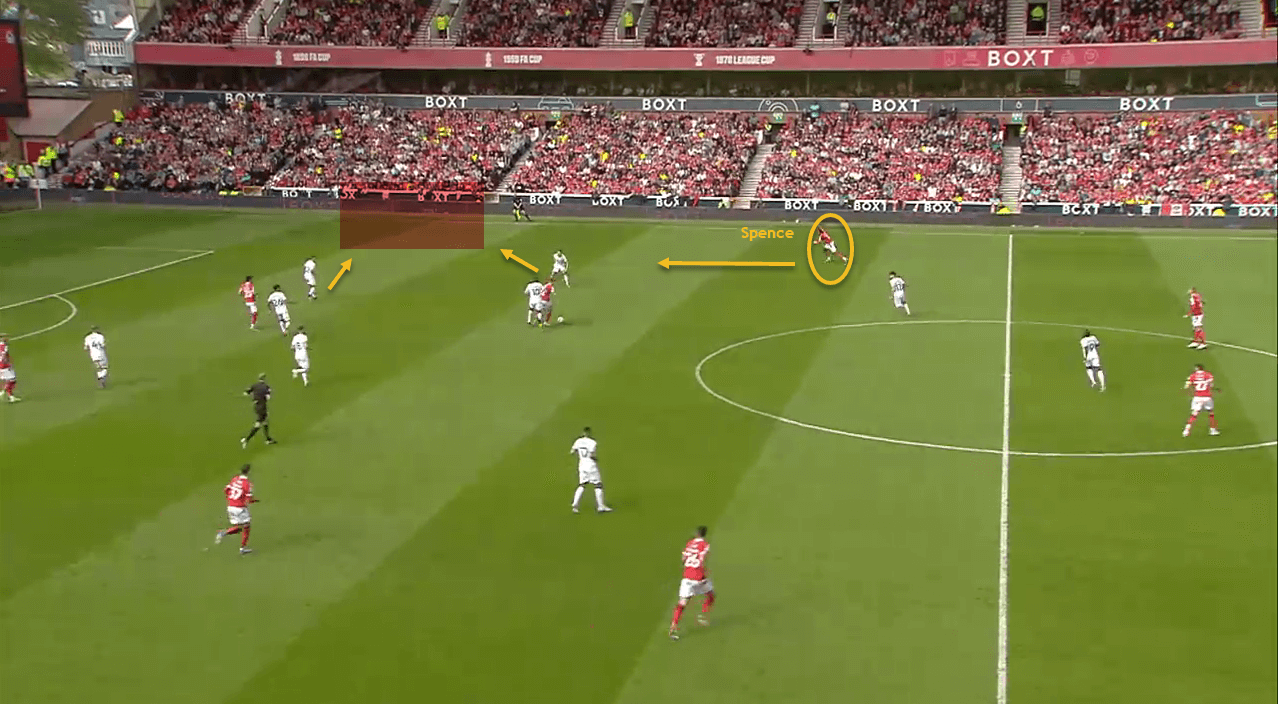 Look at this example here. When Sam Surridge crosses the ball to the back post, the pass isn’t intended for Djed Spence but the position he takes up overloads that area of the pitch. It causes the Swansea left-winger is not in the image to come and play deeper. 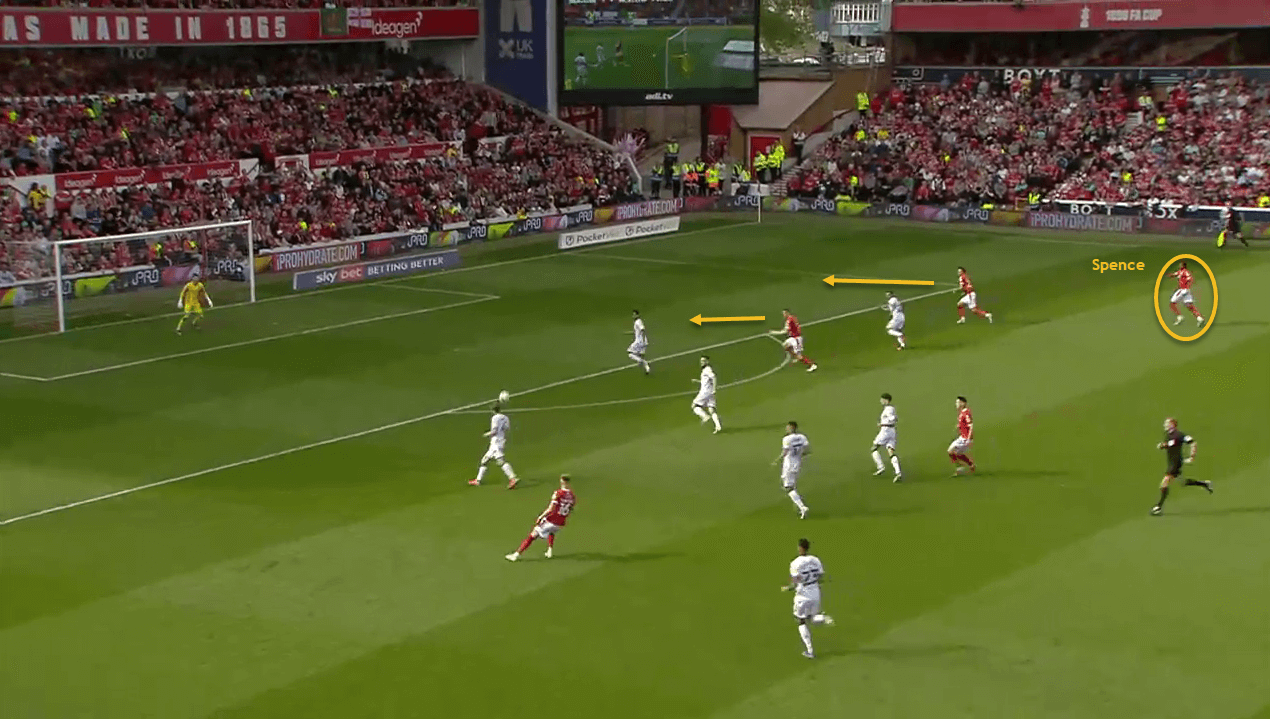 When Swansea managed to get players back into position, their lack of defensive structure still allowed Forest to exploit space. Forest took full advantage of this with the movement they offered down each channel.

The space between Cyrus Christie and Joël Latibeaudière in this image demonstrates how much trouble Forest were proving from the wide areas. 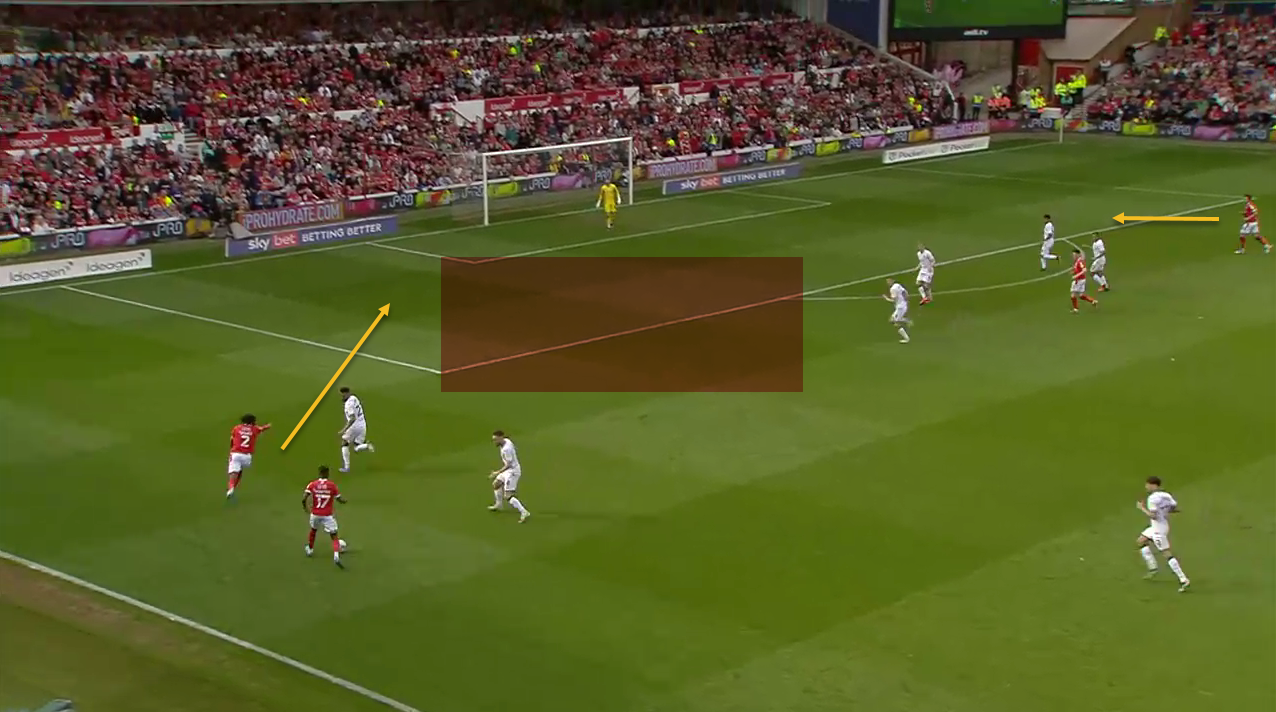 There is no overload in this passage of play. It was created from Forest pressing aggressively as a team in their defensive third. This was a case of a team being proactive with their offensive and defensive tactics.

Unfortunately for Djed Spence, he was only able to win a corner from this point but we have highlighted the areas of attacking threat that Forest’s wing play was continually causing throughout the second half.

Nottingham Forest have had an extremely good season. They are playing an exciting brand of football and they have made huge progress since Steve Copper took control of the team

Their next game is against Bournemouth in what is likely to be the automatic promotion decider. This performance will give Steve Cooper real confidence that his team can win that game, not only because of the scoreline but how the team implemented and performed the tactics he planned for this match.

Swansea under Russell Martin are still a work in progress. Their possession-based approach produces good attractive football but when a team holds 70% possession of the ball but then concedes twenty-eight attempts on their own goal something within their approach will need to change quickly.

This analysis provides an overview of the tactics that Nottingham Forest implemented in this victory. Their defensive structure against the ball worked well with their ability to counter-attack and play a quick progressive style of football.