Under Christian Streich, SC Freiburg developed to a sustainable football club with a clear club and transfer strategy. Over and over again, they need to replace their best players with young, hungry players within their budget. But not only their transfer policy works out every year. Also, the team performs at a very high level throughout the seasons. However, this campaign was probably the most successful. The club still has the chance to qualify for UEFA Champions League and can win their first DFB-Pokal in their club history. Set-pieces are a big part of the Bundesliga club’s strategy: 18 goals were scored after set-pieces. This makes 35% of all goals scored by SC Freiburg this season!

In this tactical analysis, we will discover the secret behind this success. Also in this analysis, we will take a look at the set-pieces of SC Freiburg and how they can be key in the last decisive matches during the rest of the season.

In the first situation, three players are positioned on the back-post, one player is positioned on the first post. This method stretches the opposition players and creates a lot of space in the central penalty area. Nico Schlotterbeck, who is linked with a potential move to Borussia Dortmund, uses this space to run into. 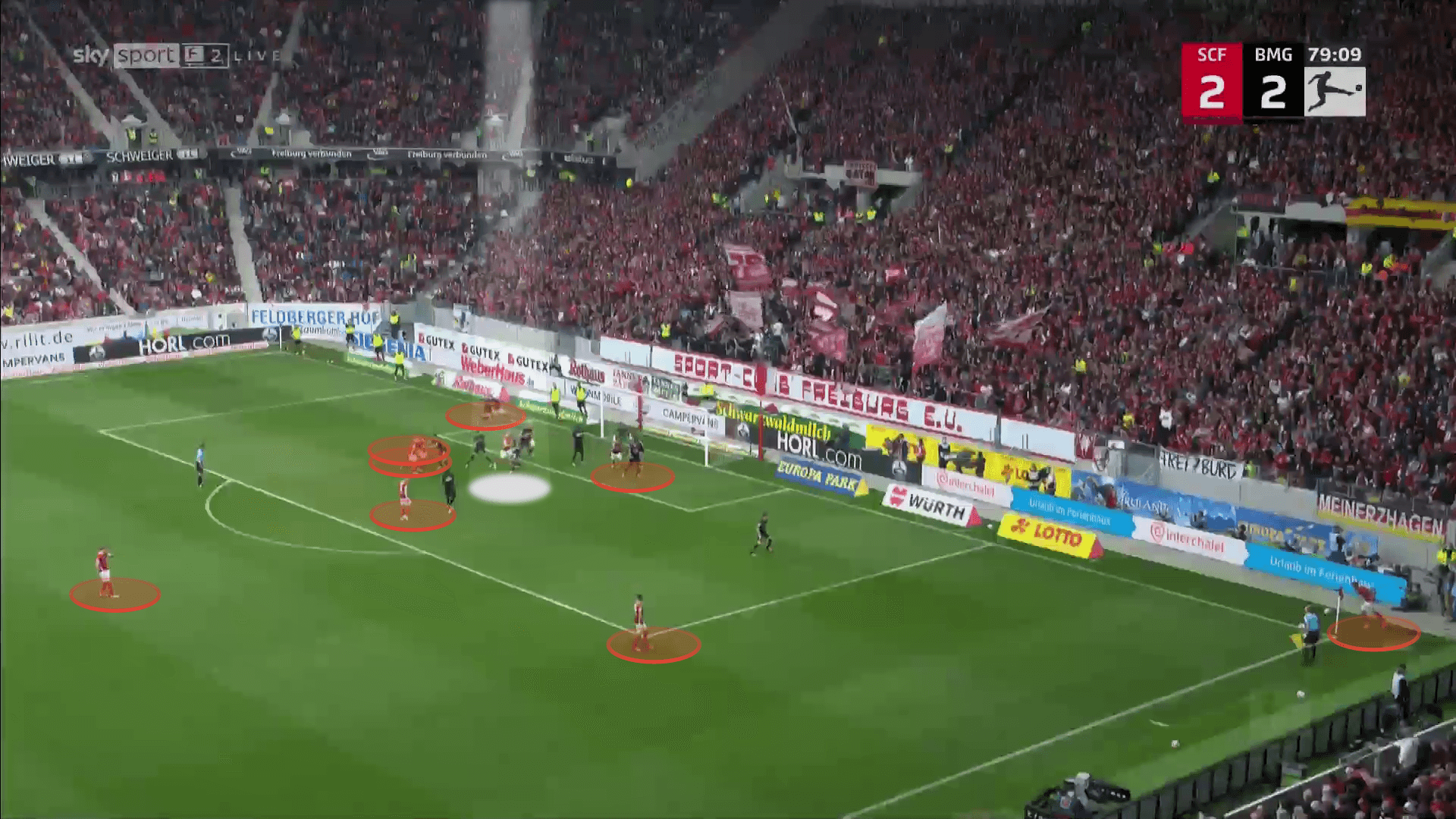 By doing this, he fills the central area and is part of a row with 5 players in the opposition 5-meter-box. Together with the oppositional players, the box is crowded and it is a difficult task for the goalkeeper to decide whether to come out or stay on the line. 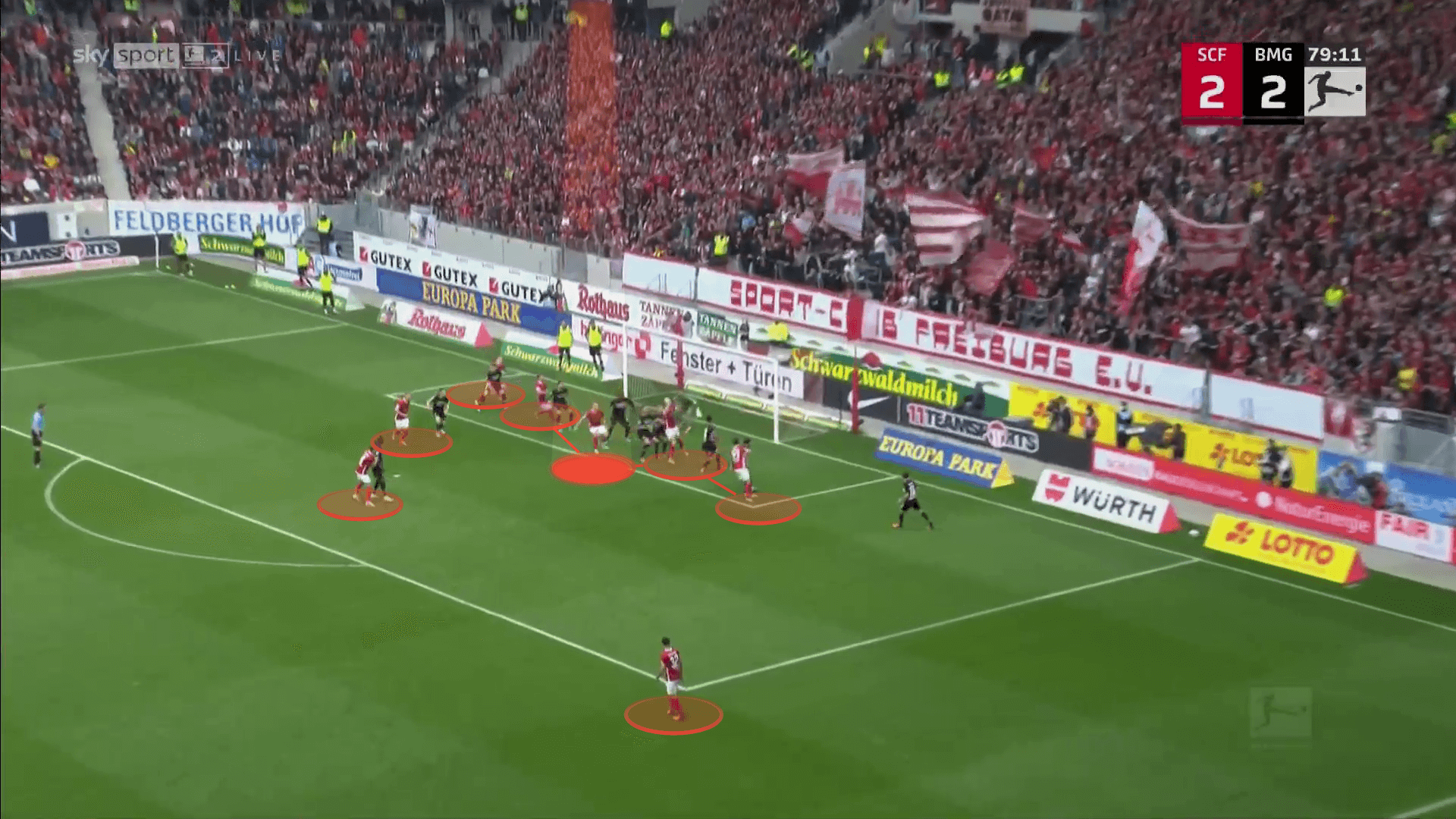 In the following image, we can see the corner from another perspective. The movements of Freiburg’s players is good to be seen in this example. 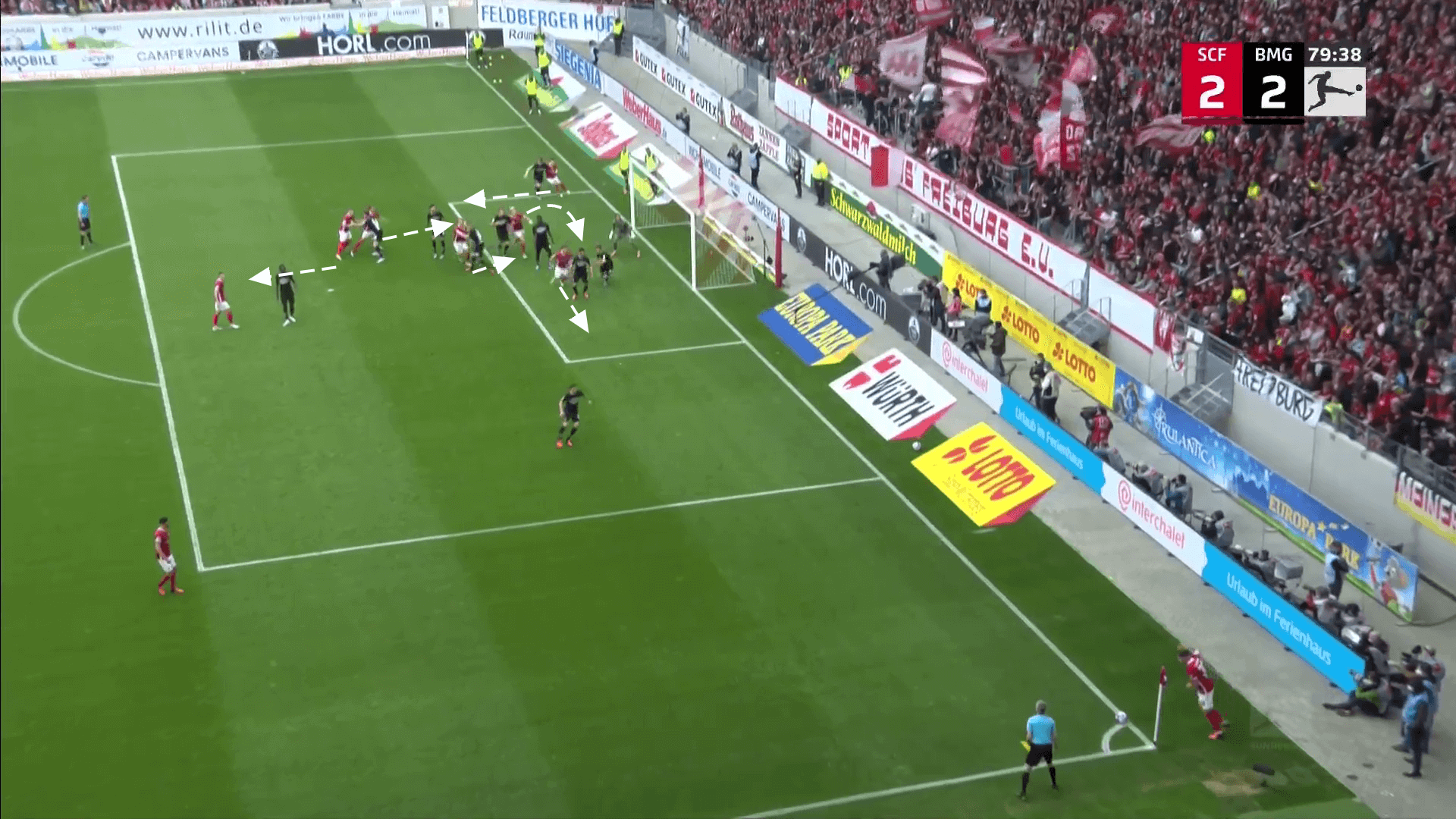 In the next situation against Hertha BSC, we see another example of this row with 5 players positioned near to the goal. One player is positioned in the penalty area, while three players cover the backroom. This means that all 10 field players are in or around the opposition’s box. They try to press directly instead of covering space in midfield. A very risky but yet successful method. 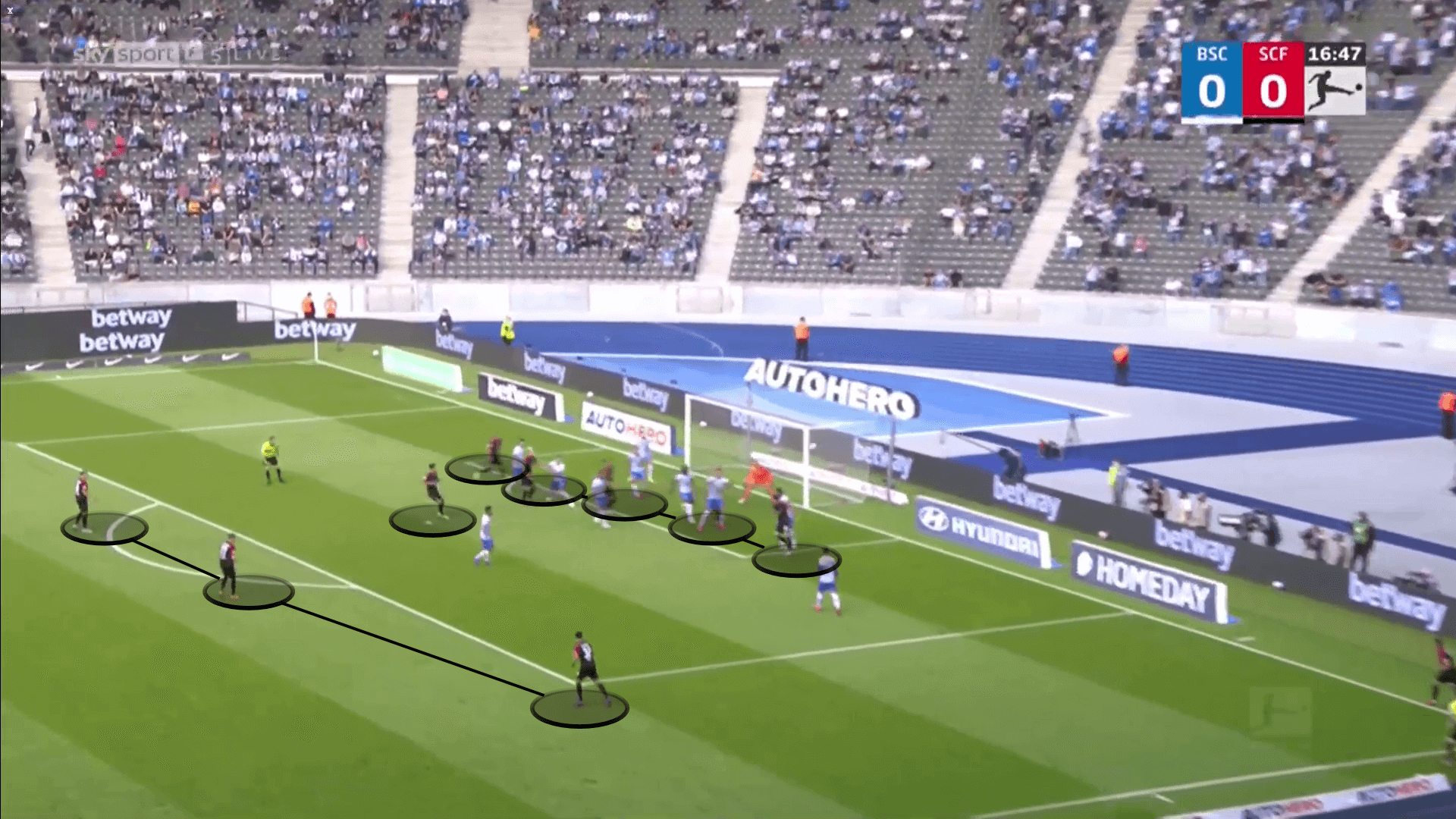 Here, we can see similar movements of the players. 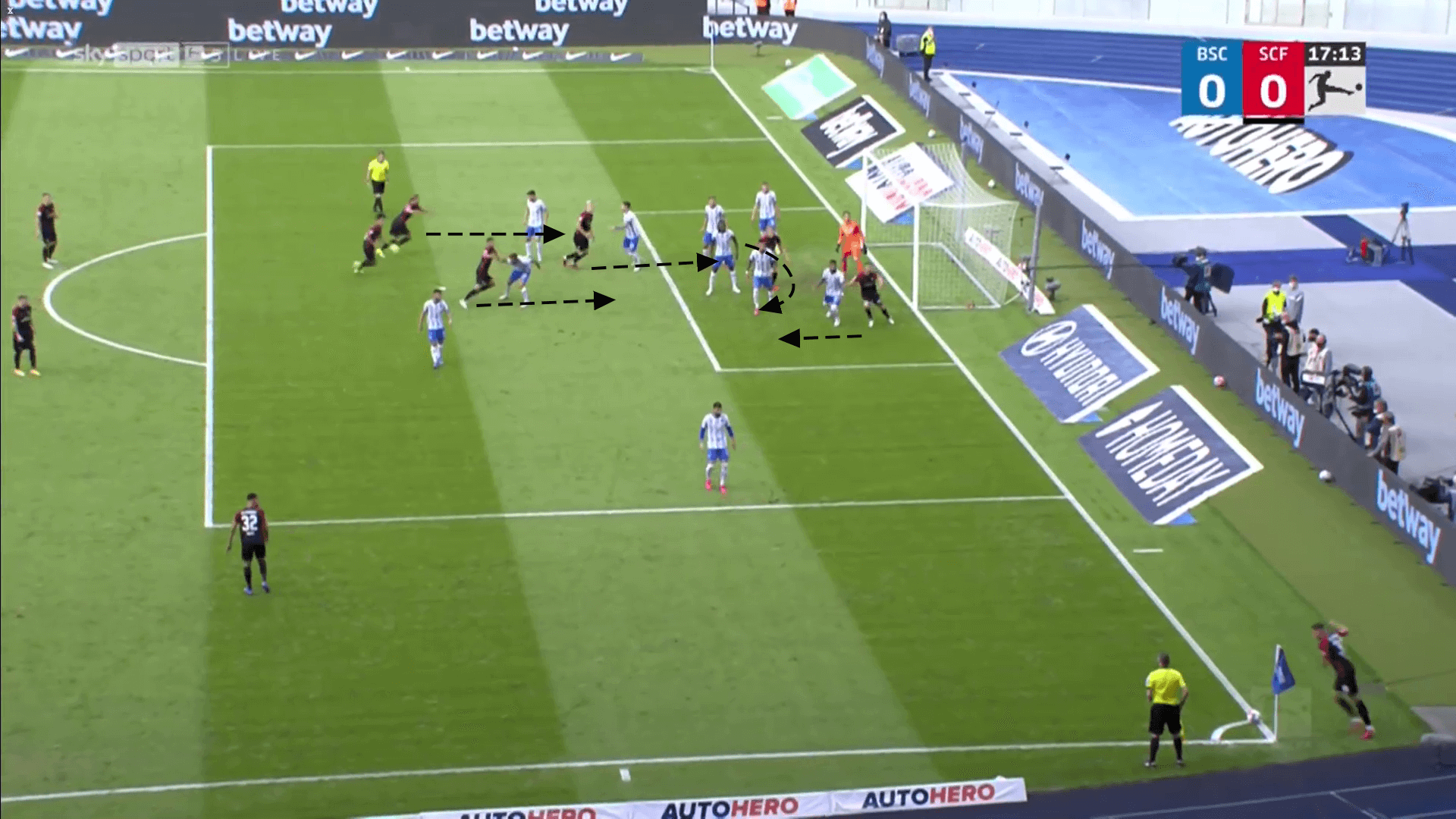 Freiburg is not only outstanding in taking corners but also in freekicks. With the likes of Vincenzo Grifo and Christian Günter, they have two specialists for set-pieces. In the next situation, we see Grifo and Günter as potential freekick-takers. Günter then surprisingly runs down the wing and receives a flat pass from Grifo. 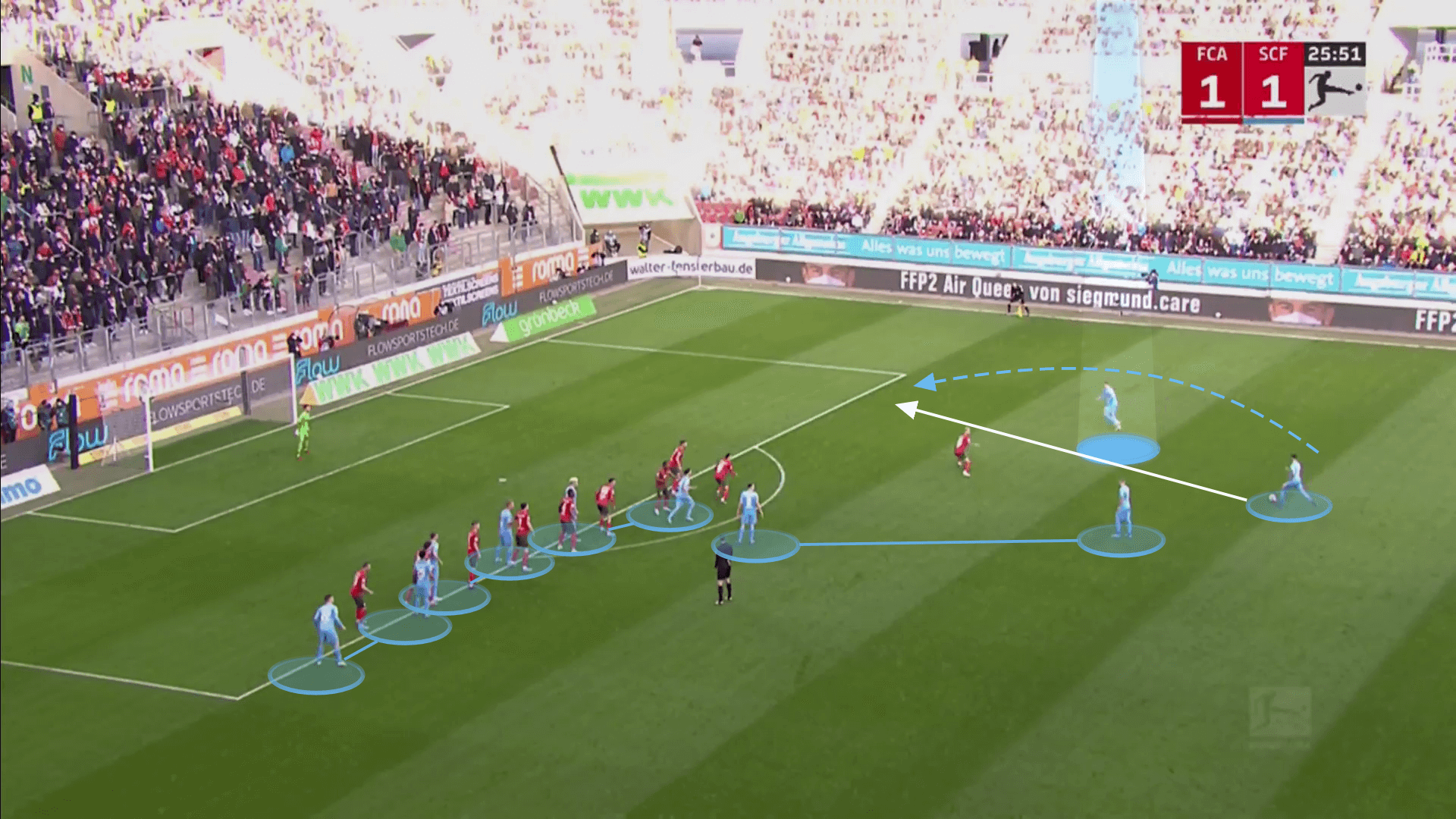 After dribbling towards the goalline, Günter plays the ball to the first post. 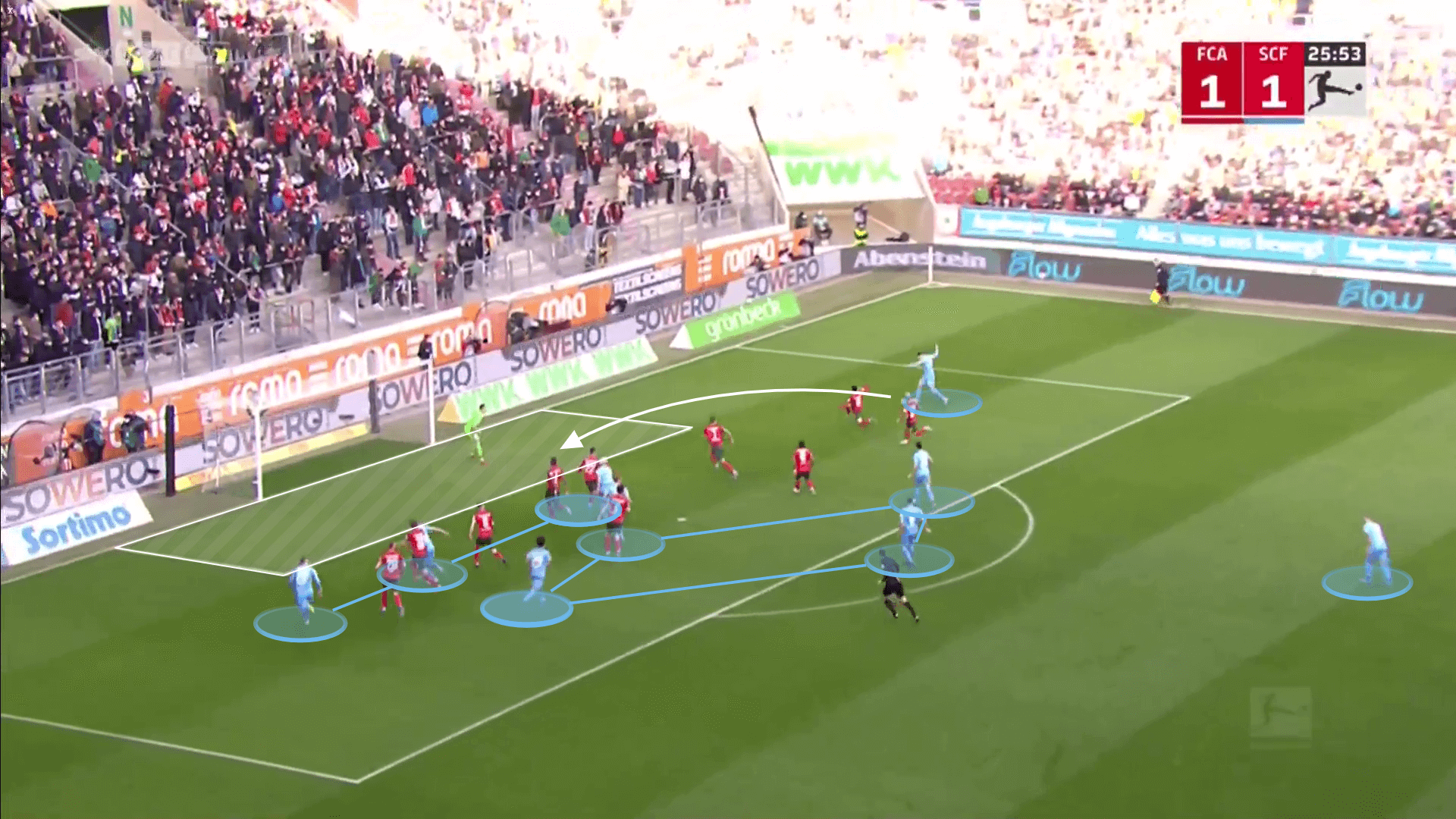 Playing the ball to the first post is another key element in Freiburg’s set-pieces. Most of their corners and freekicks are played to the area of the first post. Another example can be seen in the match against Gladbach in which they scored multiple (!) goals after set-pieces. Here, you can see that Schlotterbeck and Philipp Lienhart are the target men in set-pieces. They are both positioned on the first post and permanently run into the goalkeeper box. 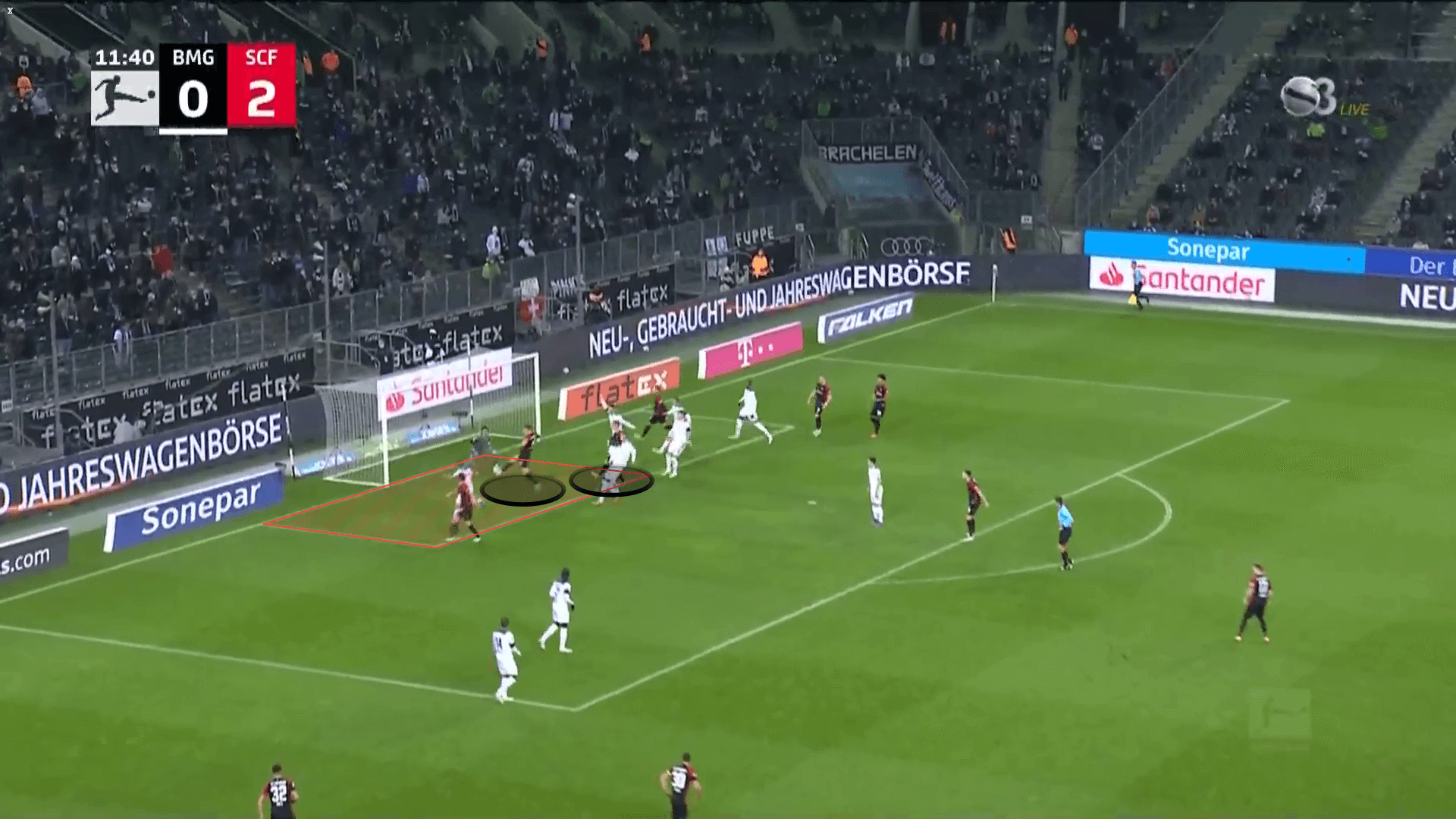 Another example from the match against Gladbach – this time from the other side of the pitch: Again, Schlotterbeck and Lienhart are positioned in the area of the first post. 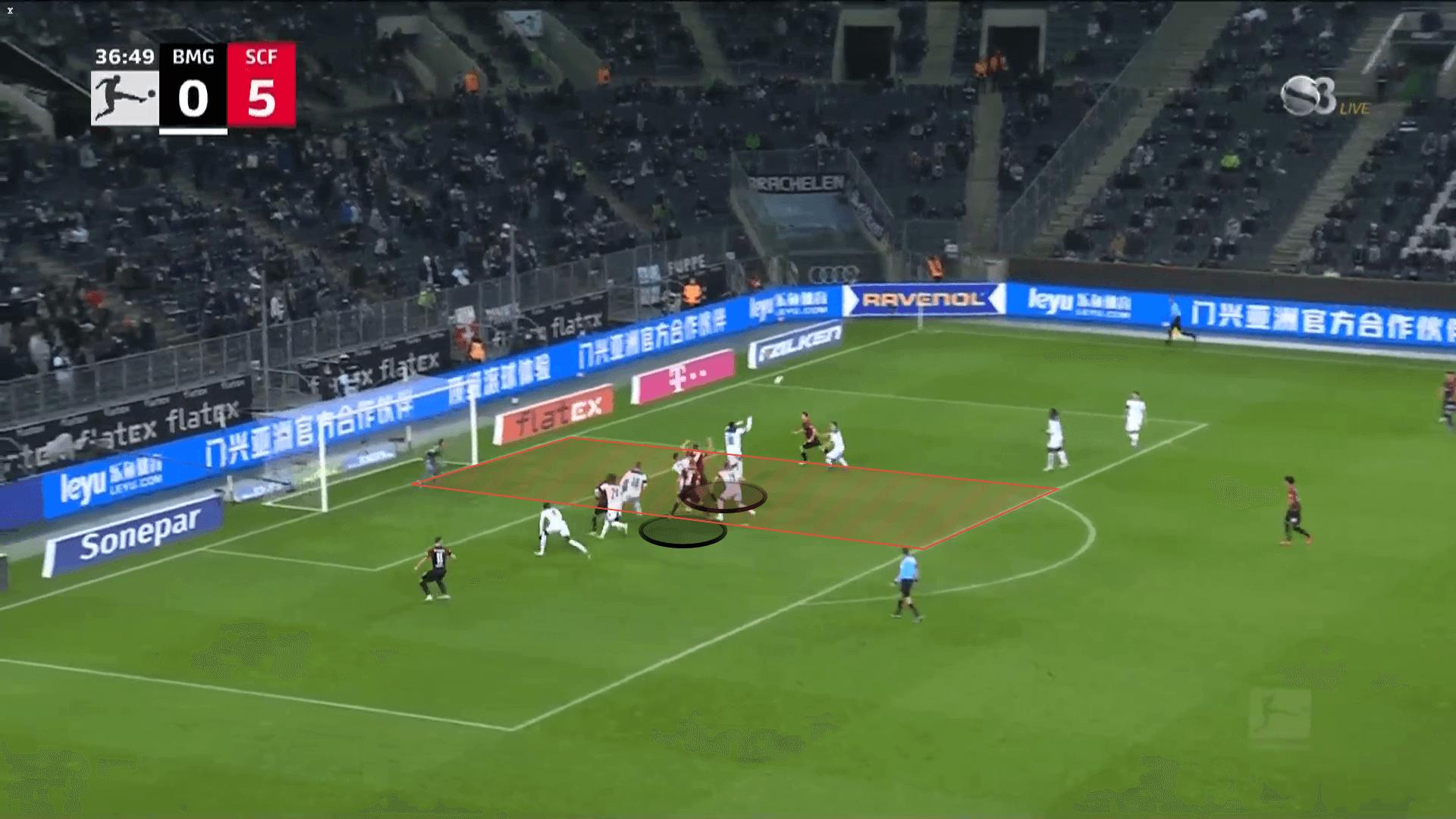 During corners, Freiburg uses the method of playing the ball to the first post as well. However, they are doing it by building a diamond structure of 4 players at the first post. Two players are covering the back-post in case of a slip through-ball and to bind the opposition players. 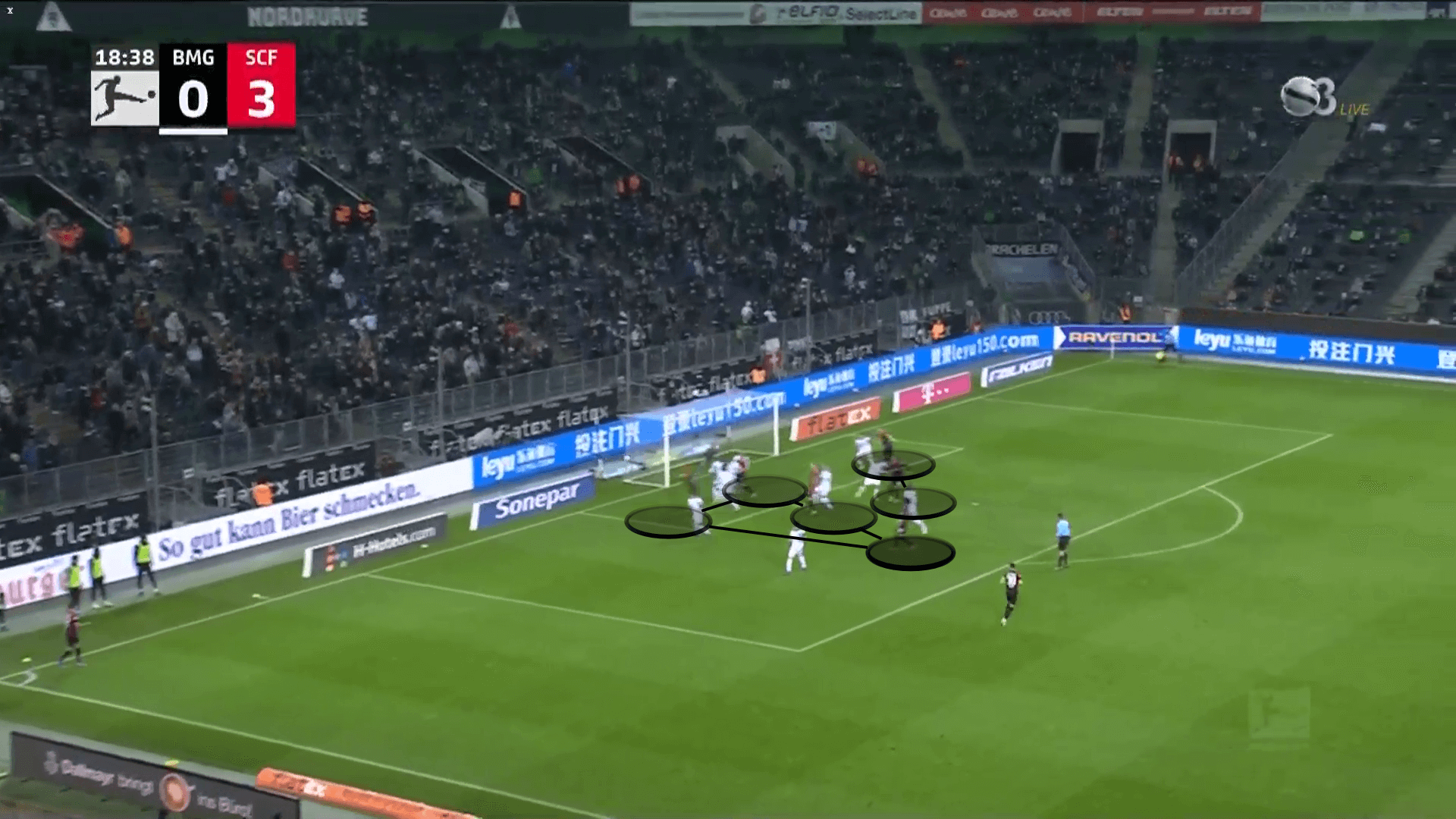 Below, we can see another example from the DFB-Pokal semi-final against Hamburger SV. Again, 4 players build a diamond at the first post while two players cover the back-post. 9 out of 10 field players are positions in or around the opposition’s penalty box. 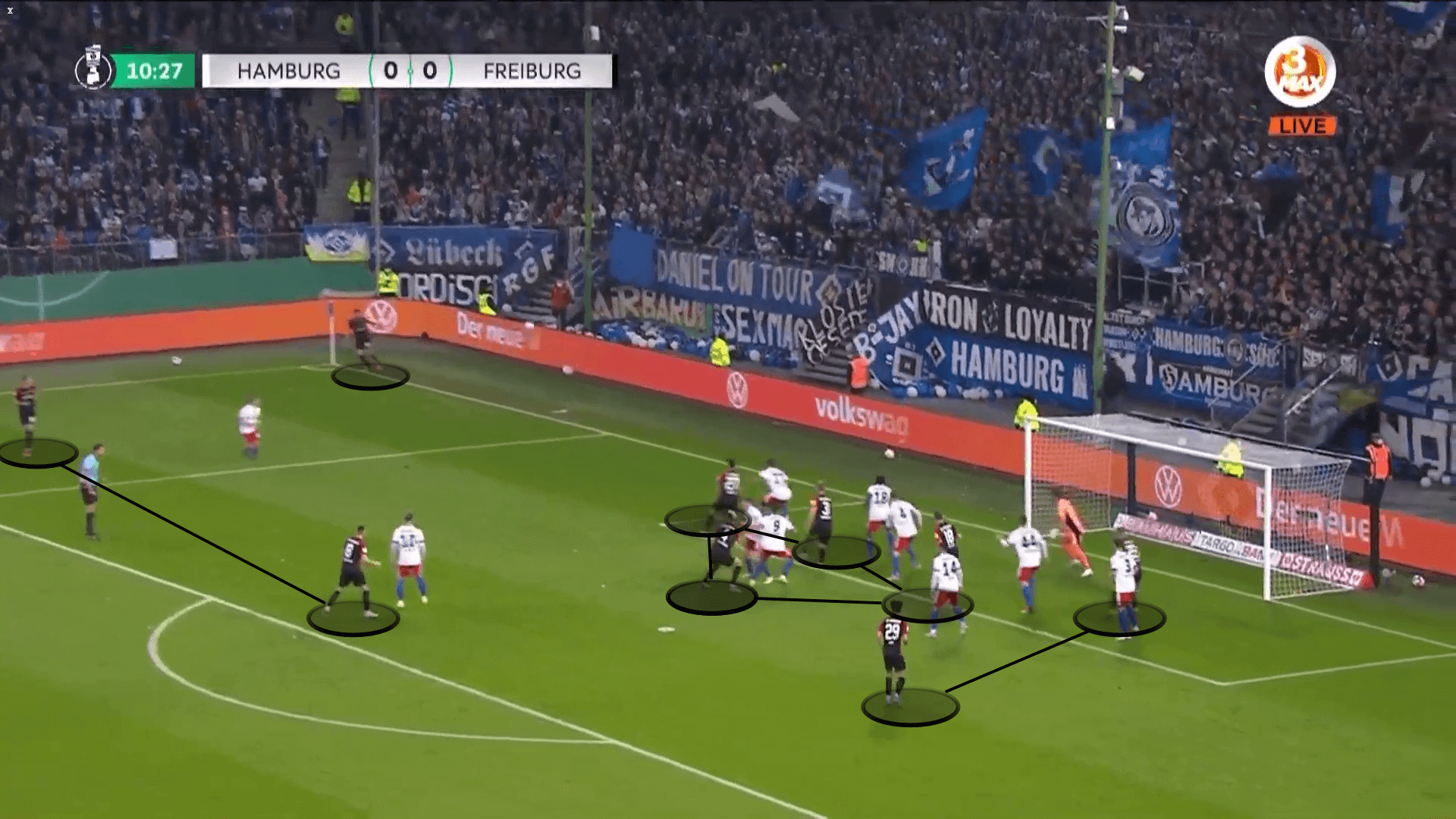 This method can be seen during freekicks as well – especially during freekicks from a rather acute angle similar to a corner. The example below is from the match against VfL Wolfsburg where Lienhart was able to score after a sharp cross from Grifo. 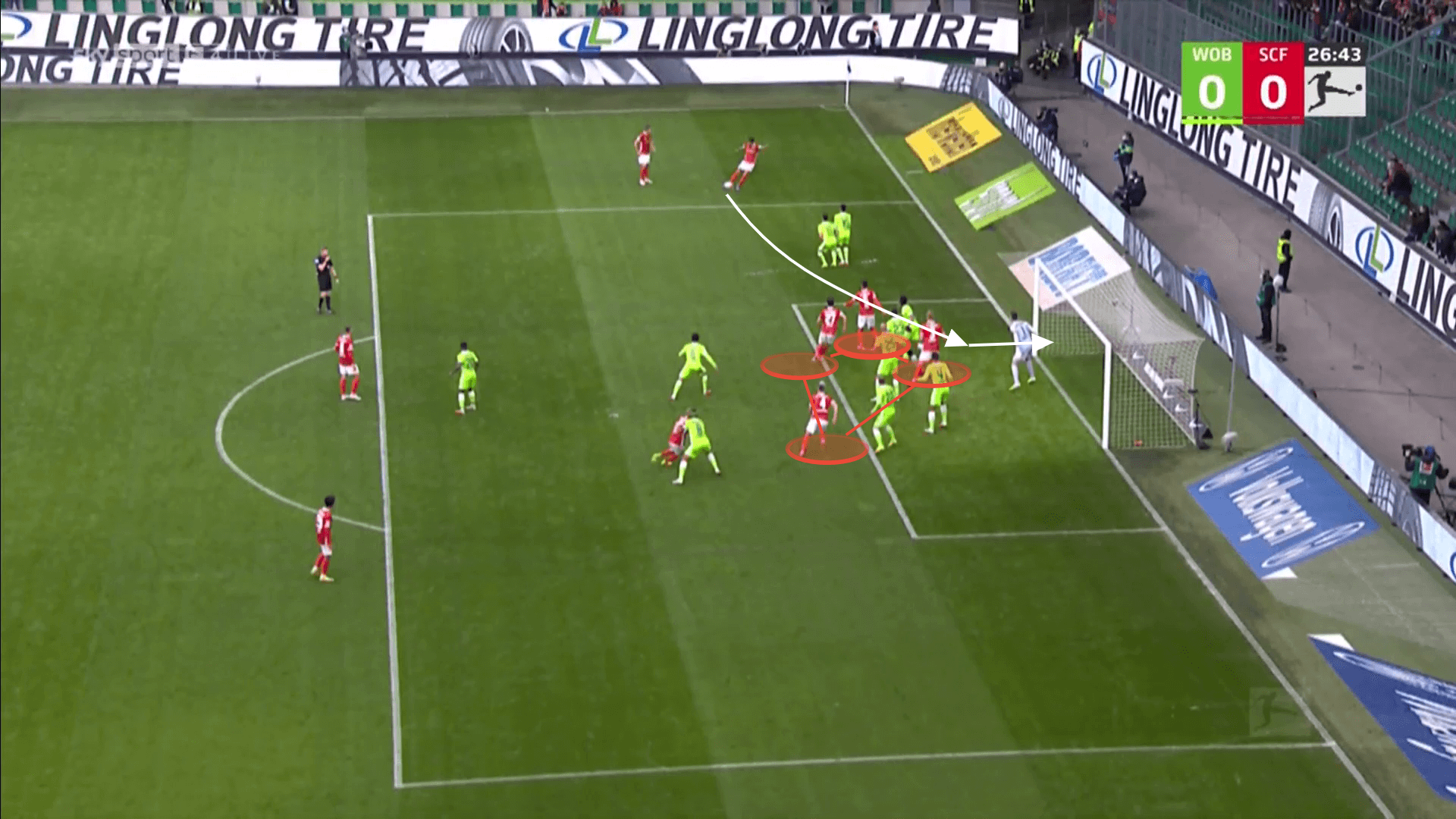 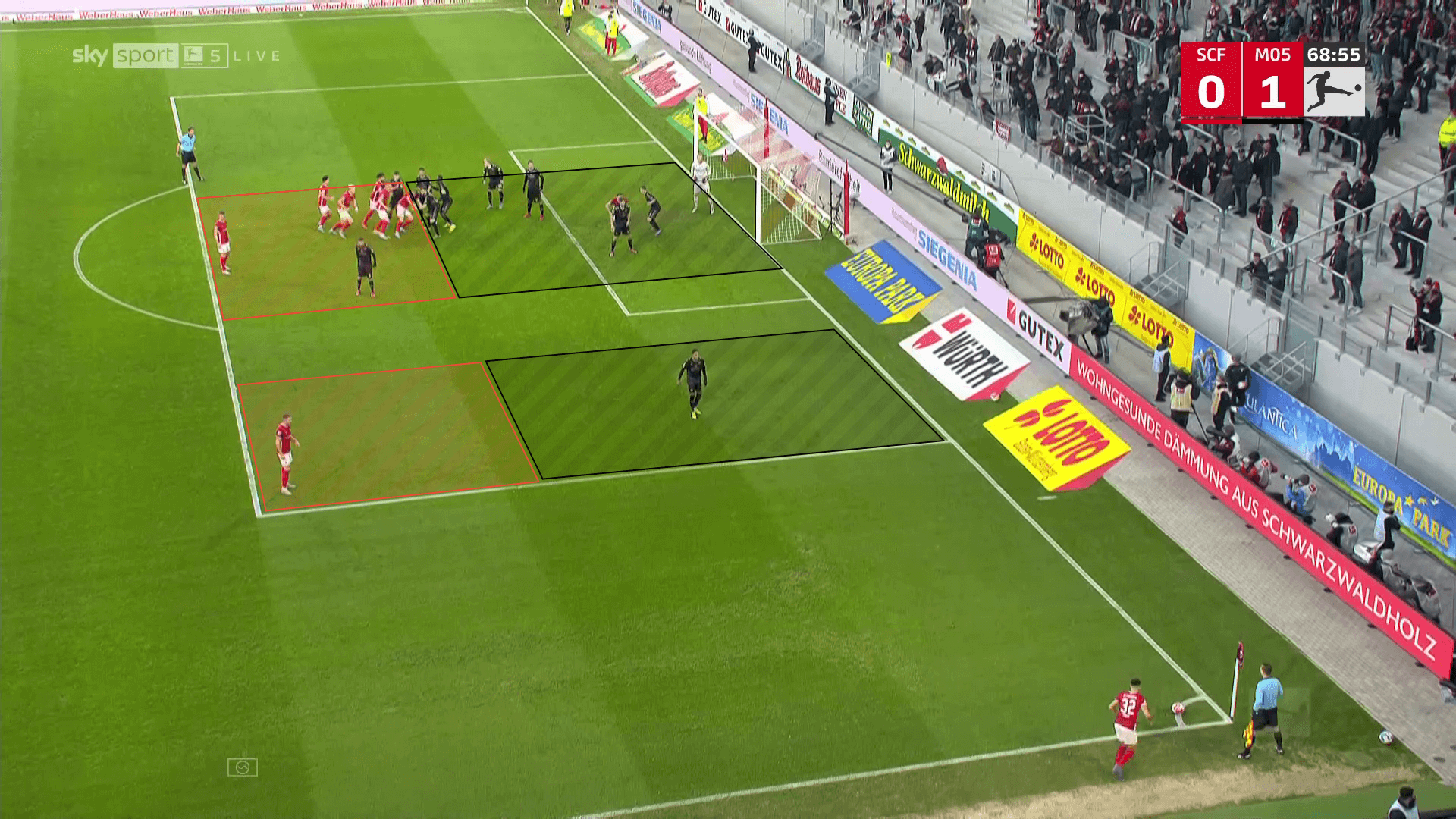 As you can see, Freiburg has 4 players to form the diamond structure and 2 players covering the back-post again. 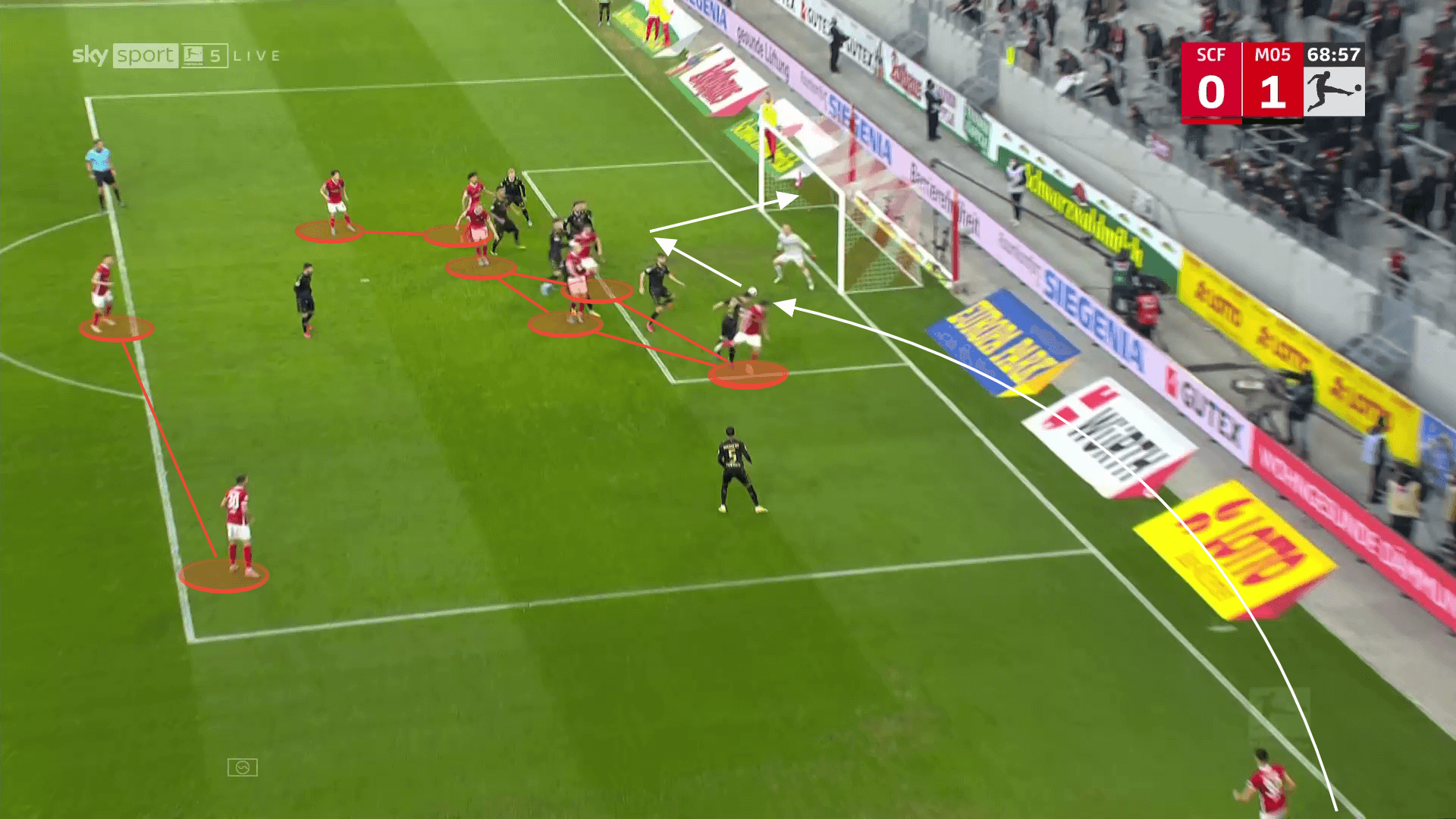 Against Bielefeld, Roland Sallai was able to score with a beautiful volley. In this situation, Freiburg formed the diamond structure again. Sallai was covering the backroom and did some steps back from his original position. In this way, he was able to get rid of his opponent and then could shoot the ball without pressure from any opponent player. 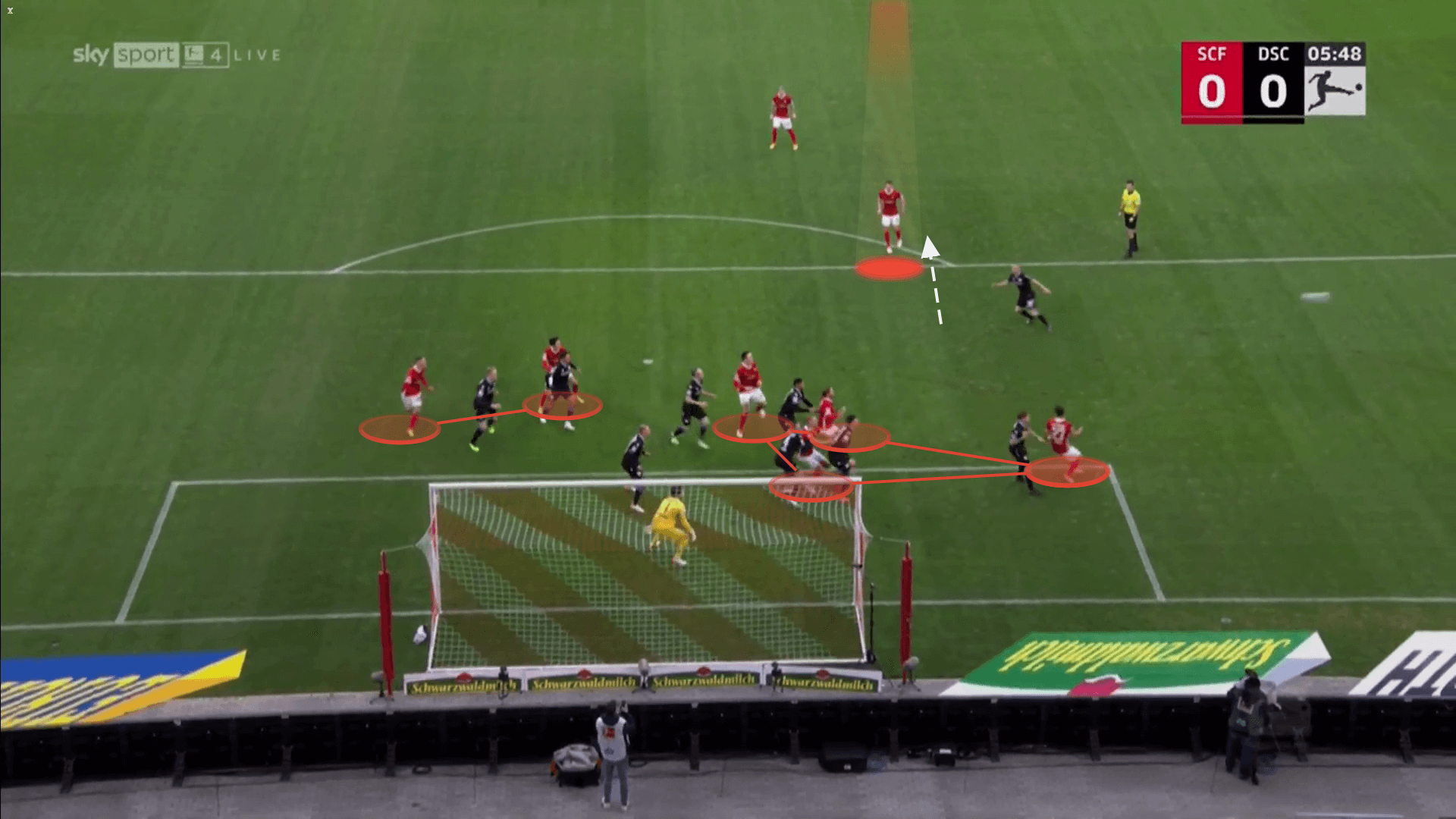 SC Freiburg are playing an outstanding season. They are in the fight for the UEFA Champions League spot in Bundesliga and still have the chance to win the DFB-Pokal for the first time in their club history. In these decisive matches, set-pieces can be key. Freiburg showed that they can use them to score and be successful. Now, it will be interesting to see how they will perform them in the last matches of the season and whether they can bring their secret to success to the UEFA Champions League next season.