A two-year loan to Borussia Dortmund as done wonders for Achraf Hakimi. Once a prodigy with an immensely high ceiling, the Moroccan international struggled for playing time with his parent club, Real Madrid, and was shipped out to Die Schwarzgelben.

While the 21-year-old was a strong performer in the 2018/19 campaign, he’s become one of the Bundesliga’s elite players. His WhoScored ranking sees him tied with fellow Dortmund full-back Raphaël Guerreiro for the 11th highest rating in the league.

With his loan ending in the coming months, will we see Hakimi return to Real Madrid or take his talents elsewhere? In this two-part series, we’ll first provide an analysis of the player, then move to the big picture topic: Hakimi’s fit with Real Madrid.

In this scout report, an analysis of Hakimi’s attacking and defending abilities are the first items on the itinerary. With an understanding of his skillsets we will connect his strengths to how he’s utilised at Dortmund through a tactical analysis.

As you watch Hakimi in action, one thing you’ll gradually notice is that he’s not the most active dribbler. Among full-backs contracted to teams in the UEFA’s top five leagues, Hakimi ranks 219th in 1v1 success with 53.44%. In total, he only wins 46.37% of his attacking duels, leaving him 198th at his position among the top five leagues. It’s common to see him turn down the dribble and play backward rather than engage 1v1. Dissecting his dribbling attempts, it does stay relatively upright, which negatively impacts his quickness and keeps him from consistently beating defenders.

So how does he beat teams? After all, he does have nine assists this season, leaving him second to Trent Alexander-Arnold among full-backs.

Hakimi tends to get past his opponents by working off his teammates and using clever movements off the ball. We’ll touch on the latter point in more detail later in the analysis. Returning to the first point, it’s worth noting that Hakimi is very active in the short passing game. He makes just over 65 passes per game and completes 84% of them. Watch the right-footer play and you’ll see that he’s very comfortable playing the right pass at the right time. His ability to pin defenders and provide a quality pass to his teammates is a real strength, allowing both players to experience consistently high-levels of success.

The young Moroccan is an excellent distributor in short and intermediate situations, but his 55% long pass and 30% crossing accuracy need improvement. Again, an in-depth analysis of his fit at Real Madrid is upcoming, but Hakimi must acknowledge that crosses are an important part of Los Blancos playing style and an area in which he must improve upon if he hopes to unseat either of the incumbents. 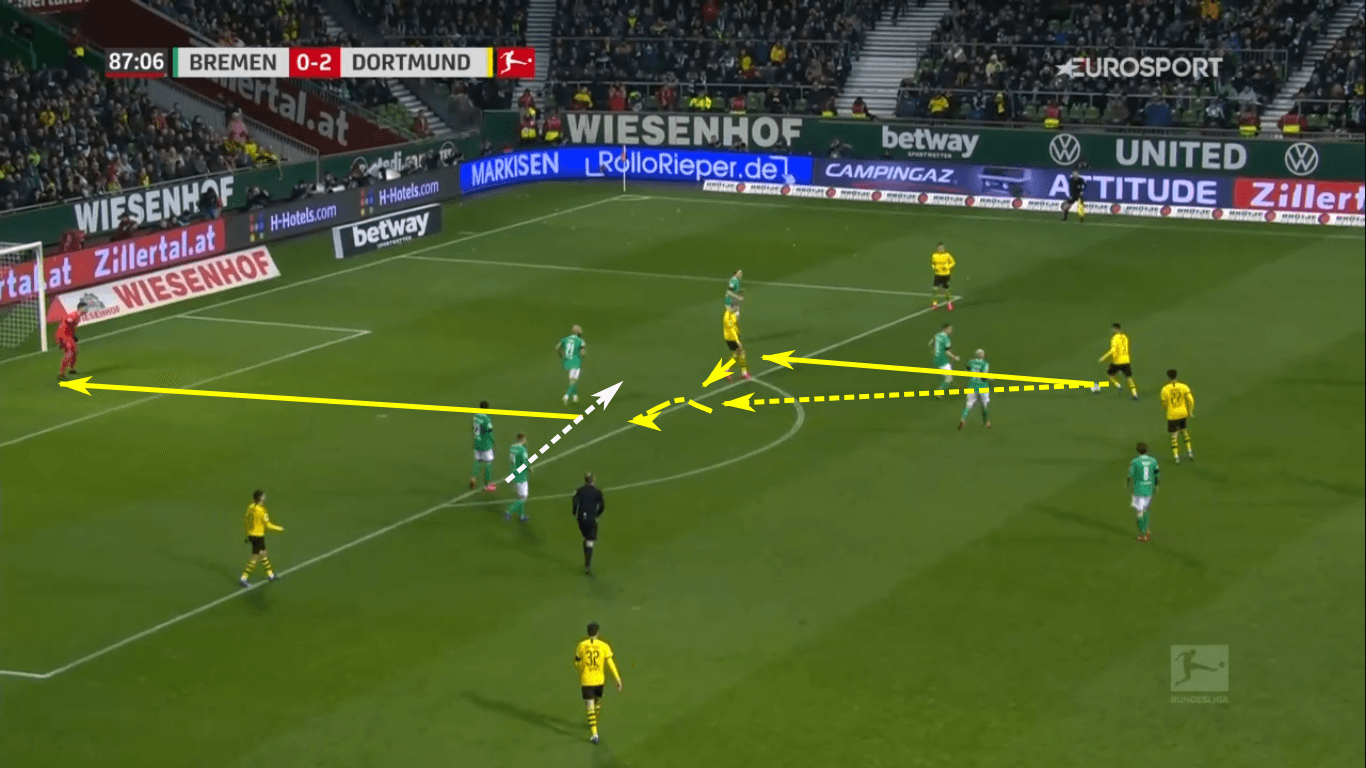 In February’s Bundesliga win against Werder Bremen, Hakimi showcased his ability to attack from both wide and central areas of the pitch. Here we see him claim the ball in a central area, pass to Erling Braut Håland and continue his run between the defence. Håland returned the ball to Hakimi who shook off his defender and unleashed a shot on target. Earlier in that match, Hakimi played a pass to Jadon Sancho on the wing, then, as you see with his head positioning, he waits for the defence to pressure the Englishman. Once the defence moved towards Sancho, Hakimi took off into the half space. Sancho played it into his path, allowing his teammate to cut inward. 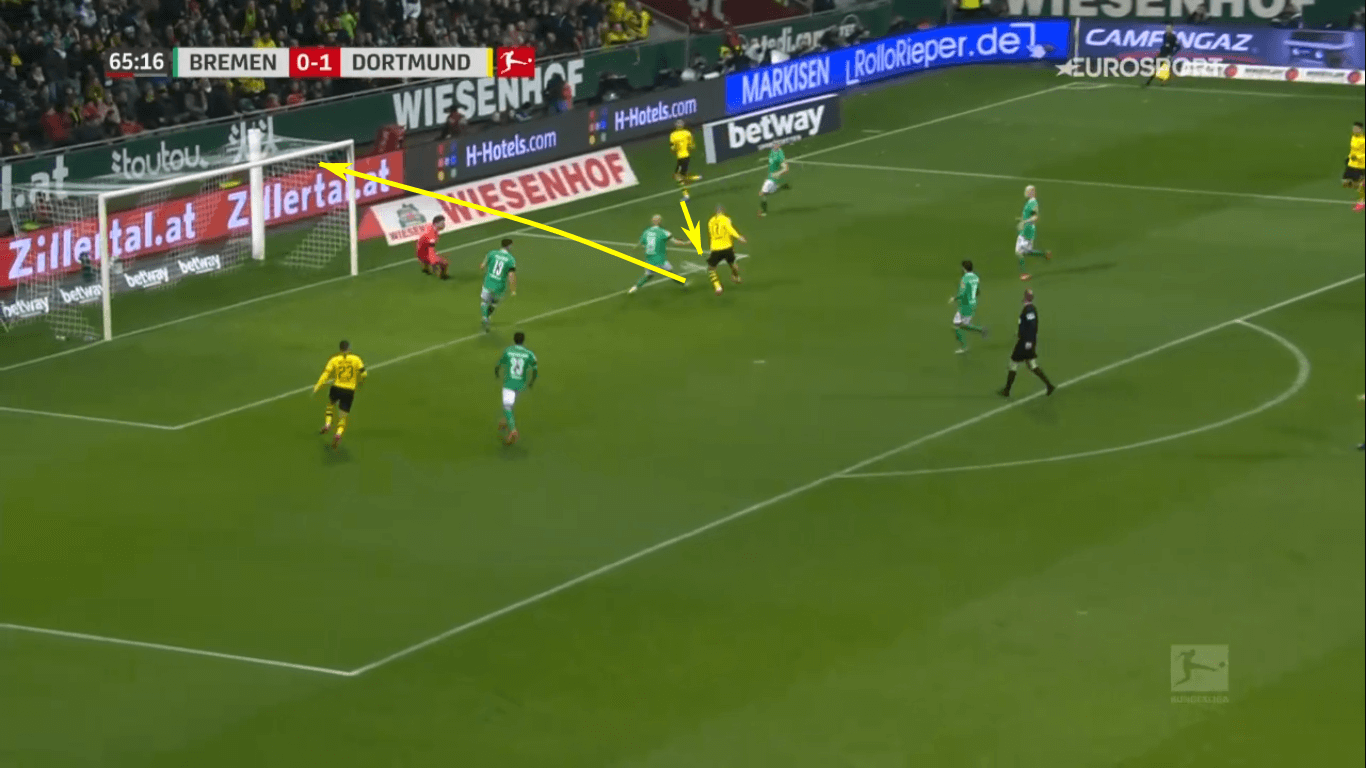 Hakimi turned the corner on the defender and played a negative cross to Håland, which the Norwegian smashed into the roof of the net to seal the victory. Hakimi’s commitment to the attack and utilisation of passing ability perfectly set up Håland, who ran straight to his teammate in celebration.

Look through Hakimi’s defensive stats and the first thought that will come to mind is “ehh”. His 58.6 defensive duels won ranks 222nd among full-backs contracted to clubs in the top five leagues, plus he only intercepts 3.15 passes per game. That latter statistic is good for 362nd among full-backs.

While those stats look rather negative, there are a few important items to consider. First, he plays for a team that has more of the ball, meaning there are fewer opportunities for recoveries. Second, when he does engage, a high percentage of those duels come in transitional moments. Those are very difficult to defend. Plus, not every duel needs to end in a first defender tackle. Funnelling the attacker into the covering defender or to the endline are highly effective defending strategies that result in a personal loss but, in general, a positive tactical gain for the defending team.

Digging into an analysis of his defensive ability and contributions, his tackling could certainly improve, but he’s no slouch. His first contact is usually high and he doesn’t mind contact.

The two things that really impressed me were his positioning and anticipation. For a winger who is so heavily involved in the attack, Hakimi is a committed defender, hustling back and connecting with his backline after a turnover. Even with all the talent PSG has on its left-side, they struggled to produce meaningful opportunities against Hakimi. Again, it’s not that he was destroying every play that went to his side, but it seemed like he was always in the right position and didn’t make careless mistakes.

Given his strong sense of positioning, as a wide midfielder for Borussia Dortmund in a 3-4-3 or a right-back in a 4-2-3-1, Hakimi’s vantage point allows him to contest passes and win entries into his zone. His eyes are active and he reads the play well, spotting the intent of the opponent and cutting out the move.

As his side transitions to defence, he usually hustles to the backline to deny space. Since he experiences a high degree of success in attack, most of his recovery runs occur after the loss of a cross or away from his wing. When he or a teammate does lose possession on the right side of the pitch, he’s willing to counterpress and work for a recovery. 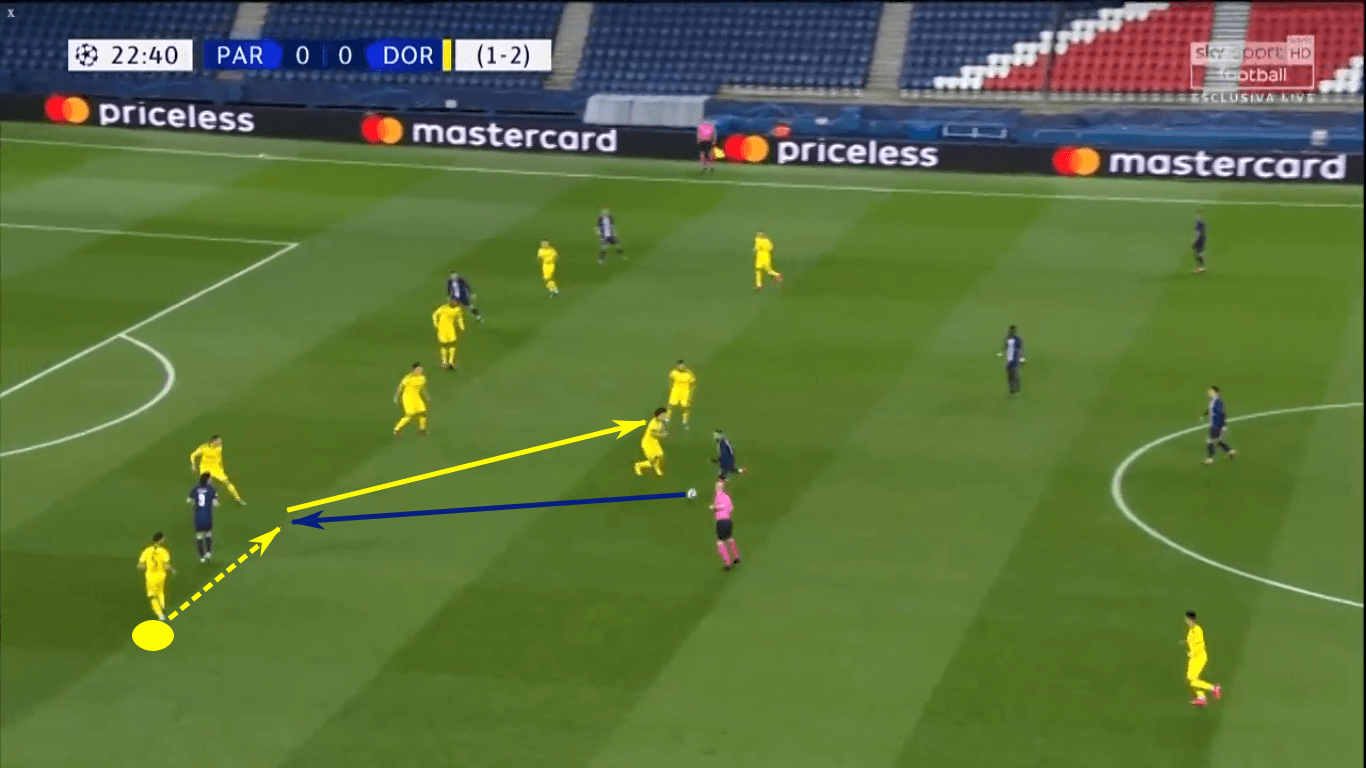 In the second leg of the UEFA Champions League tie against PSG, Hakimi’s defensive positioning and anticipation were on display. Neymar Jr. tore through the central-channel and looked to play in Edinson Cavani. The pass travelled on the intended path, but Hakimi’s positioning and read of the play allowed him to intercept the pass and restart the attack. 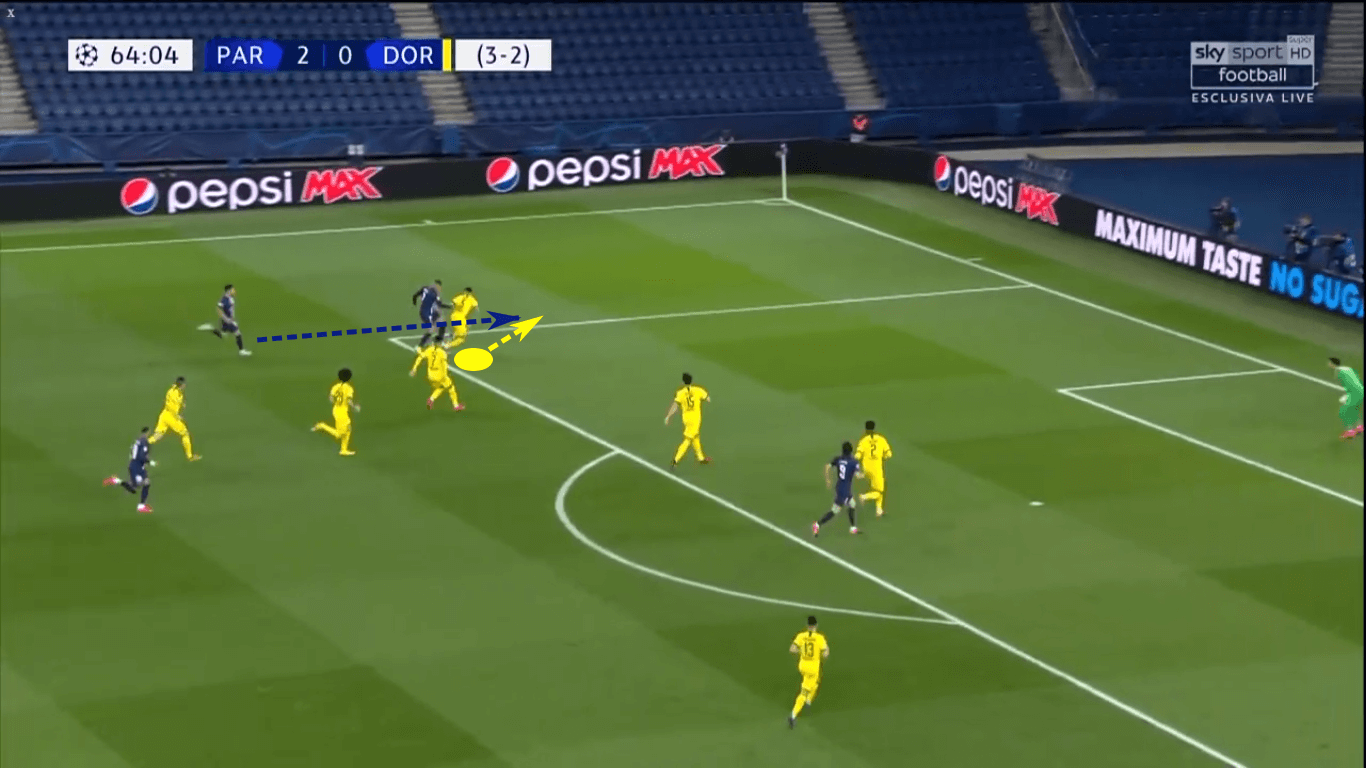 Later in the match, he had the opportunity to defend Neymar 1v1. The Brazilian made his move, but a clever tackle from Hakimi led to a block tackle. Both players fell to the floor, allowing Pablo Sarabia to run towards the ball. As he was about to take the ball past Hakimi, the Moroccan international managed to get up and kick the ball against Sarabia’s foot, earning Dortmund a throw-in and escaping trouble.

As all modern full-backs should, Hakimi has a great motor, which suits Borussia Dortmund’s tactics. Watching him run the length of the pitch as often as he does will leave you short of breath. Stamina and speed are significant strengths. His 36.2 km/h sprint against Leipzig set the record for the fastest sprint in the Bundesliga. From a psychological perspective, he’s very willing to sacrifice for his team and make the extra run for them. His consistency is greatly improved compared to his time with Real Madrid, which will surely please the parent club. This loan spell has seen him mature and show greater focus to the finer tactical details, allowing him to have a greater impact on the match.

As noted in the attacking section, he’s not the most aggressive or highest quality dribbler, so Dortmund use him a bit differently than they would a standard winger.

The two tactical strengths that really stand out are his work off the ball and combination play. He’s very comfortable playing in the spacious wings or moving into the tighter, central area. Until he’s ready to fully commit to the assault on goal, you’ll notice he’s very aware of his attacking opportunities and his side’s defensive vulnerabilities. Until the run of play requires his direct action, you’ll find him balancing out his defensive and attacking responsibilities with intelligent movement off the ball.

When it does arrive at his feet, if there’s little or no space to run in behind the defender, you will see him play back. His 13.13 back passes are 12th highest among full-backs affiliated with teams in the top five leagues. Hakimi is very much an opportunistic attacking, patiently awaiting the right pocket of space to run into. Until that space appears, he’s willing to keep possession and continue working towards the freeing of the running room.

Once the space is available, watch him get behind the defender with a give-and-go. He does such a brilliant job of committing the defender to either the threat of the dribble or the path of the pass that he nearly always has a spatial advantage over his mark. The variability of his runs further enhances this strength as he’s comfortable moving wide or more centrally and using either foot when passing or receiving. 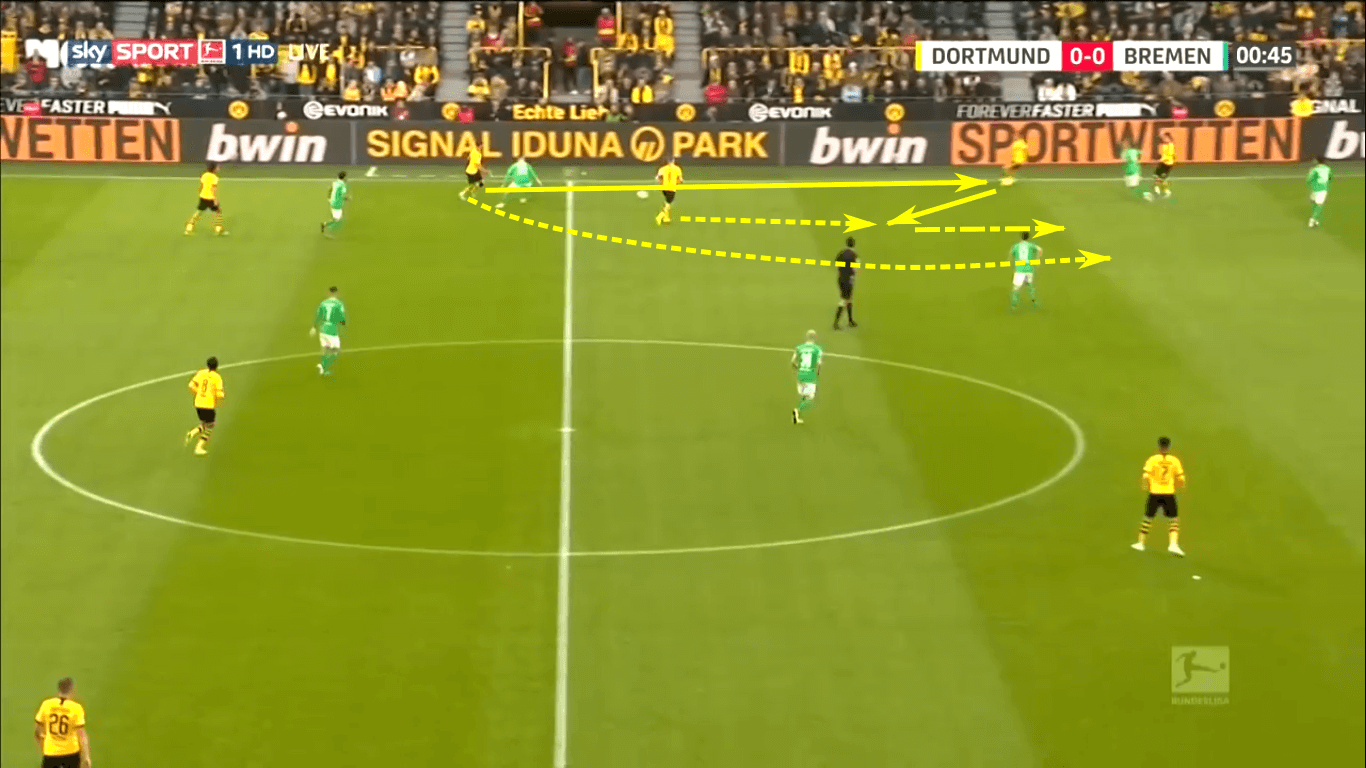 To showcase Hakimi’s versatility, we turn to the first Dortmund vs Werder Bremen match of the season that took place in late September. Earning the start at left-back, Hakimi opened up the game in spectacular fashion. After receiving the ball on the left-wing, he played down the line to Thorgan Hazard, who then set back to Marco Reus. The captain carried the ball forward while Hakimi continued his run in the left-half space. 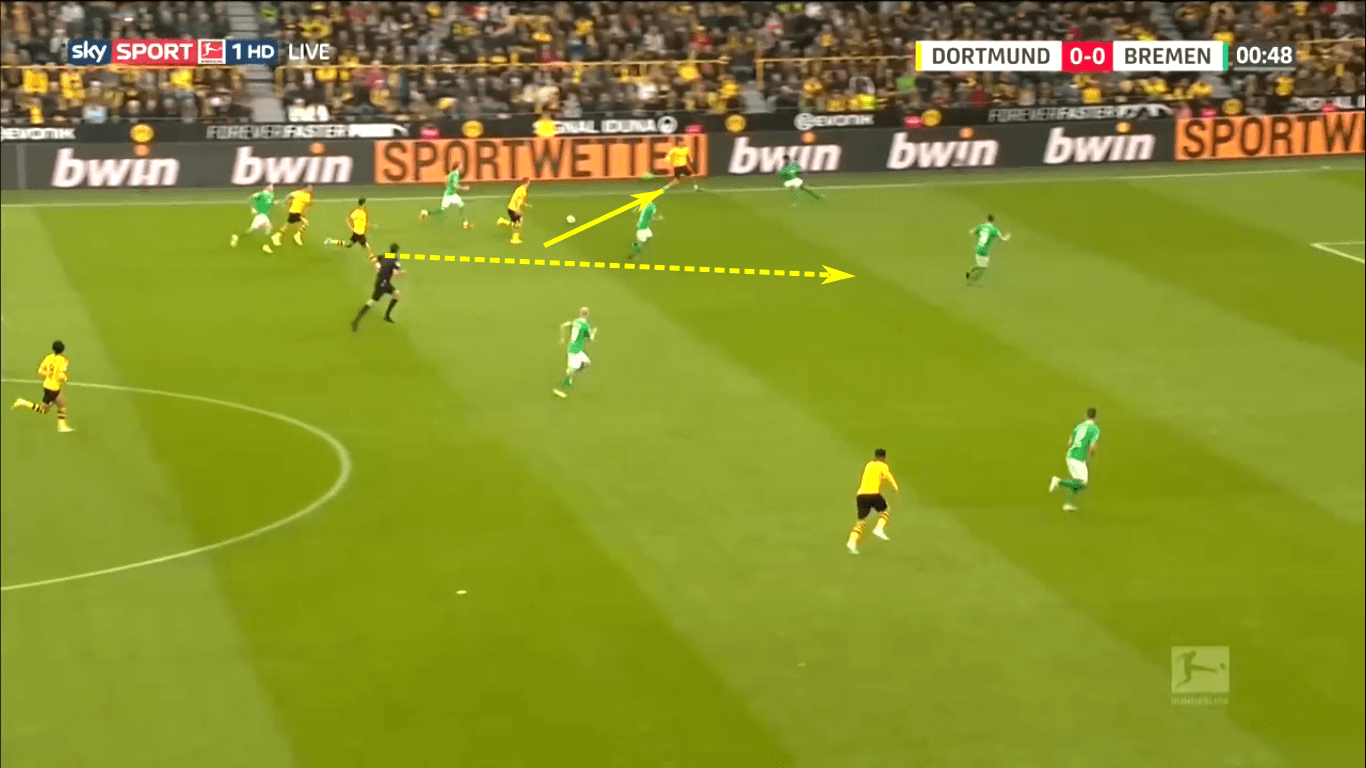 Reus played wide to Mario Götze, then continued his run deep into the wing. Meanwhile, Hakimi ran alone through the half-space. Once Reus cleared the lane to Hakimi, Götze played the left-back’s run. With Sancho making a hard run into the left-half space, Hakimi bent a beautiful pass behind his teammate and Bremen left-back Marco Friedl. Mahmoud Dahoud streaked into the box and opted for a shot with his first touch. The shot was blocked and fell to Götze who suffered the same fate. Still, it’s the central penetration and final pass from Hakimi that produced the opportunity.

Hakimi’s development has gone according to plan, leaving Real Madrid with some difficult decisions on their hands. Hakimi is a right-footed player who features on the right-wing for Dortmund. That also happens to be the position of Dani Carvajal, Real Madrid’s most consistent full-back. Production from the wings has got to be one of Los Blancos’ priorities this summer, but has Hakimi done enough to earn regular playing time in Madrid?

That’s a question for another article. Let’s get back to that next week. Until then, I hope you’ve enjoyed this opportunity to learn about Dortmund’s dynamic right-back. His skillset differs from your 1v1 loving winger, but maybe it’s that lack of a one-track mind that sets him above the competition and has propelled him to the top tier of the position.

If you enjoyed this scout report, be sure to come back next week for the follow-up. We’ll take a data-driven look at the La Liga side to see 1) if Hakimi fits into their plans and 2) where they can utilise his abilities.