Paris Saint-Germain managed to overturn their first-leg deficit and will progress into the quarter-final of the Champions League following their 2-0 victory over Borussia Dortmund. The Ligue 1 titans finally delivered on the big stage, eliminating their Bundesliga rivals in the process.

This tactical analysis will delve deeper into both teams’ tactics and will use analysis to determine just how Thomas Tuchel got the better of Lucien Favre.

For the home side, there were five changes in total in regards to their first clash in Germany a couple of weeks ago. Tuchel had to improvise with Marco Verratti, Thomas Meunier and Thiago Silva suspended while Kylian Mbappé was only fit enough to make the bench.

Pablo Sarabia was chosen instead of the young Frenchman up top while Thilo Kerher and Marquinhos formed the backline alongside another newcomer into the lineup, Juan Bernat, and Presnel Kimpembe. Finally, Leandro Paredes accompanied Idrissa Gueye in midfield that closed a trademark 4-4-2 formation. 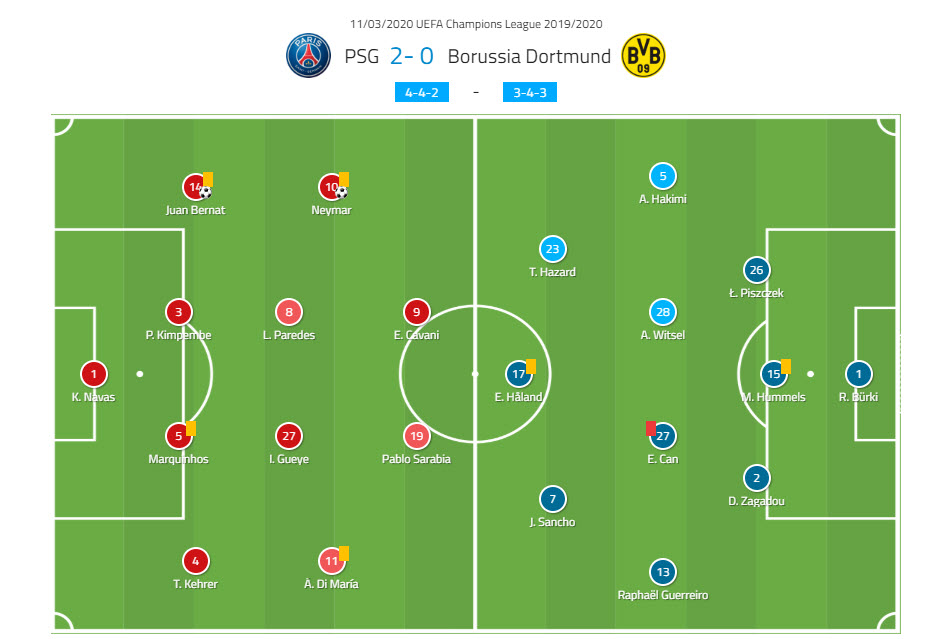 On the other side of the pitch, Favre had much less to do in terms of his players as Borussia Dortmund were deployed in an identical formation as the one they used in Germany a couple of weeks back.

They lined up in a 3-4-3 system that mirrored the one used at Signal Iduna Park when they managed to snatch a 2-1 victory over their guests. This time around, however, those same tactics didn’t really work out that well, which we’ll now further explain in this tactical analysis.

Back to the roots for Paris Saint-Germain

The biggest change for Paris Saint-Germain that happened between the second and the first game was the change in formation. The French giants decided to go back to what they know works and were deployed in a 4-4-2 system that transformed into a 4-2-2-2 or even 3-4-3 when progressing the ball across the pitch.

But this fixed a lot of issues from the first game mainly because of the functionality of the forward line. With Edinson Cavani and Sarabia constantly pinning the centre-backs and forcing them towards their own goal, Neymar and Ángel Di María would often find space between the lines to receive the ball in dangerous zones, as can be seen in the image below.

And this was practically the main theme of the whole first half as Paris Saint-Germain dominated the ball and mostly dominated the proceedings on the pitch. Of course, with the wingers constantly cutting inside and positioning themselves cleverly behind the midfield line, the hosts could easily find their targets.

But a couple of things played right into their hands. Firstly, Borussia Dortmund’s 5-4-1 defensive system was too flat and left huge gaps to be exploited vertically. You can see in the image below how without a staggering line, the defensive shape doesn’t really offer that much cover and PSG can easily position their players in advantageous zones.

The idea from Favre was to box in Paris Saint-Germain’s double-pivot, forcing the Parisiens to go out wide and then collapse on them when they were pinned against the side of the pitch. But with those structural issues, they still allowed their opposition to penetrate them centrally.

The second thing that was constantly lacking in their approach – as opposed to the first game in which this was utilised much better – was the ineffective pressing tactics. Borussia Dortmund pressed high up the pitch if the ball was recycled all the way backwards and PSG were being forced into their first third.

But as you can see from the sequence below, they would often leave gaps which allowed Paris Saint-Germain to easily bypass the pressing squad and progress the ball all the way from the back.

If, however, Dortmund managed to box the midfield in and tighten up their lines, one of the pivots would regularly drop into the backline to form a back three with two of the centre-backs and he would help advance the ball up the pitch, usually sending it out wide before making a darting run from the deep himself.

PSG were consistently getting into the final third with no major setbacks and their first-half dominance was rewarded with two goals that ultimately sealed the deal. But it was also their ability to defend well that ensured they would keep the clean sheet.

During the defensive phase, Paris Saint-Germain swapped between various different systems in order to minimise the damage that could be done by the opposition. Mostly, they operated in a 4-5-1 mid-block that focused on successfully shutting down all the passing lanes leading into the middle third.

If the ball was recycled between the centre-backs and the full-backs were successfully forced back to assist the build-up, PSG would often switch to a 4-3-3 when engaging into the press and then deployed a rather aggressive pressing approach that saw them collapse on the opposition and hunt for the ball.

This, in turn, led to them engaging into duels higher up the pitch, which was often the case in the first-half when 12/34 recoveries happened in the opposition’s half and Borussia Dortmund registered 30 own half losses in that period as well.

You can see the guests’ losses on the night in the graphic below and note how a large percentage of those first-half losses happened in Borussia Dortmund’s own half. It doesn’t surprise that PSG ended the half with a PPDA (passes allowed per defensive action) value of just 7.4, highlighting their aggressive approach.

Borussia Dortmund, however, did have a couple of tricks up their sleeve that they tried utilising from time to time. The most prominent one was movement manipulation. Their forwards would regularly drop deeper in order to receive the ball and pull a defensive player out of his shape in the process as well.

That would then leave the flanks open for a penetrating through ball to be deployed. You can see an example of that below as Hakimi can be sent into space with PSG’s defender pulled out of their defensive line. 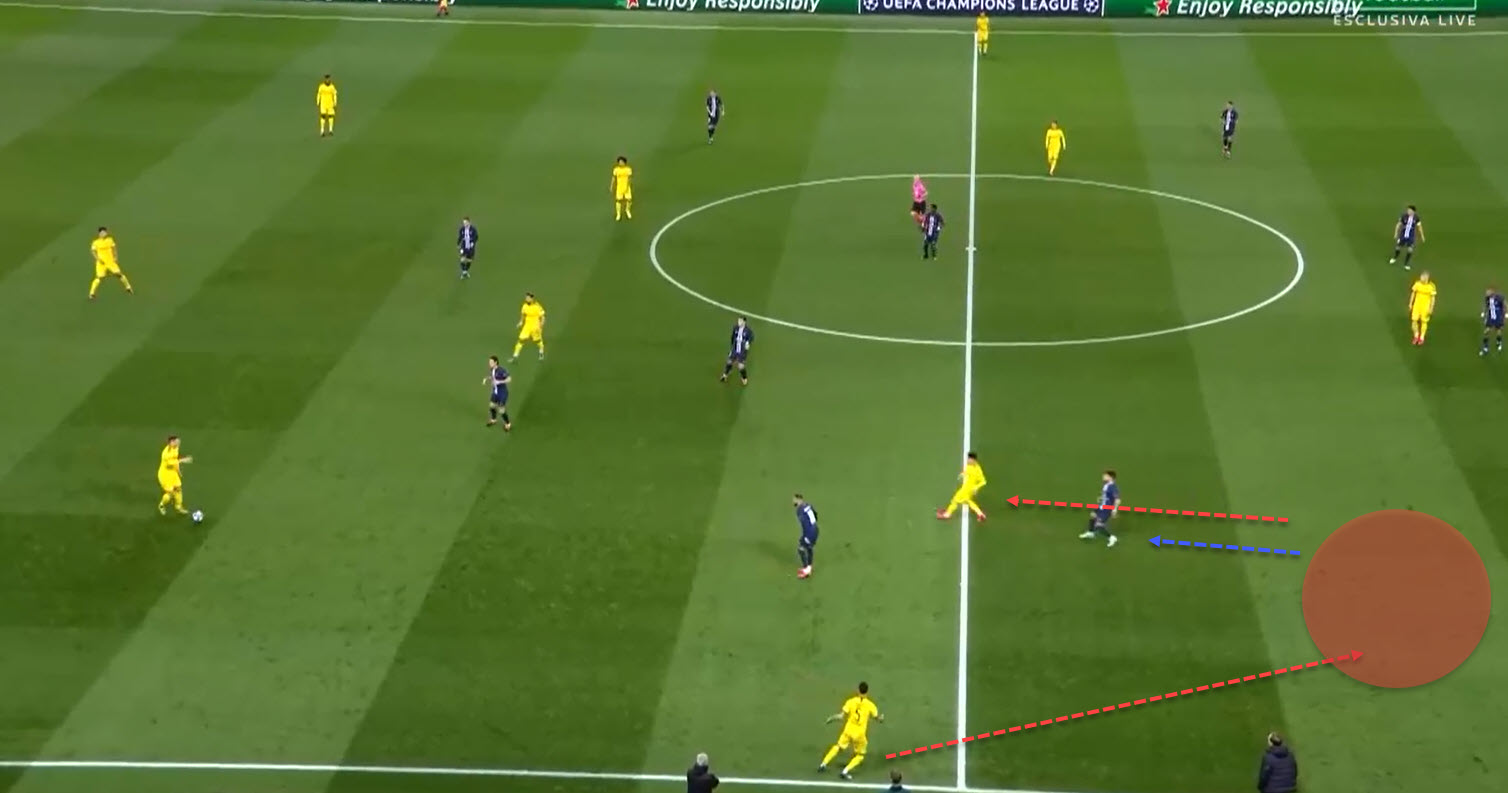 Similarly, Erling Braut Haaland was also one of the targets on the night and Favre’s tactics were also to find the Norwegian prodigy with long balls and use his strength to win the first ball, lay it off and then sprint back into space that was created by his movement.

Observe such a sequence of play in the image below. Haaland drops, pulls one of the defenders and that creates space. Meanwhile, one of his teammates bursts right into that area and can then receive the ball from another player since Haaland could successfully lay it off after winning the duel.

But Borussia Dortmund had some serious problems in penetrating Paris Saint-Germain’s solid defensive tactics. The reason behind that was something that actually plagued the French titans in the first leg of the clash – their striker was constantly isolated and they couldn’t find him often enough throughout the night.

Thorgan Hazard and Jadon Sancho would either drift wide in order to stretch the defensive line or would drop deeper to receive the ball but that made it easy for PSG to just double-down on Haaland and keep him boxed in-between the centre-backs almost throughout the whole game. 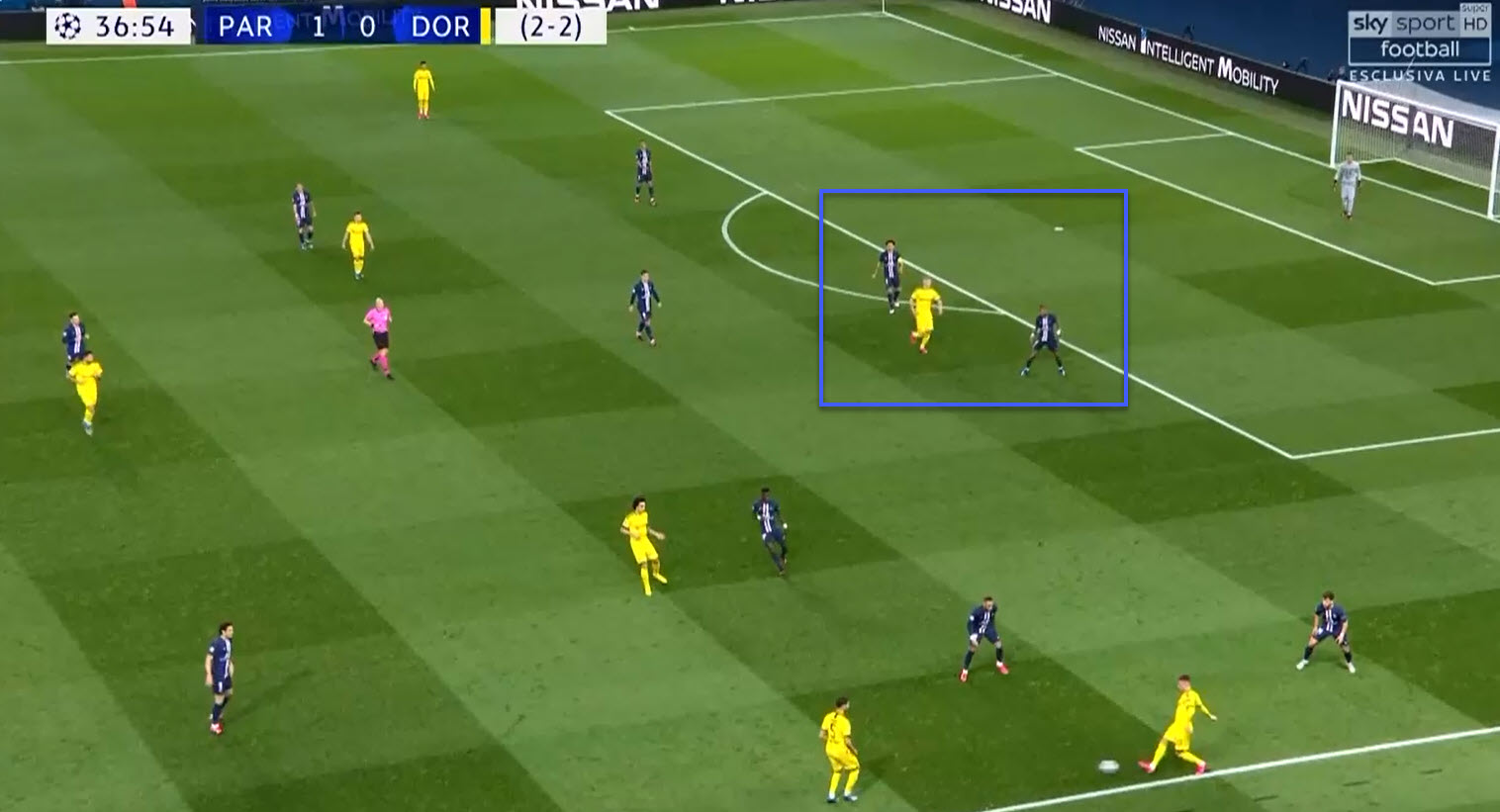 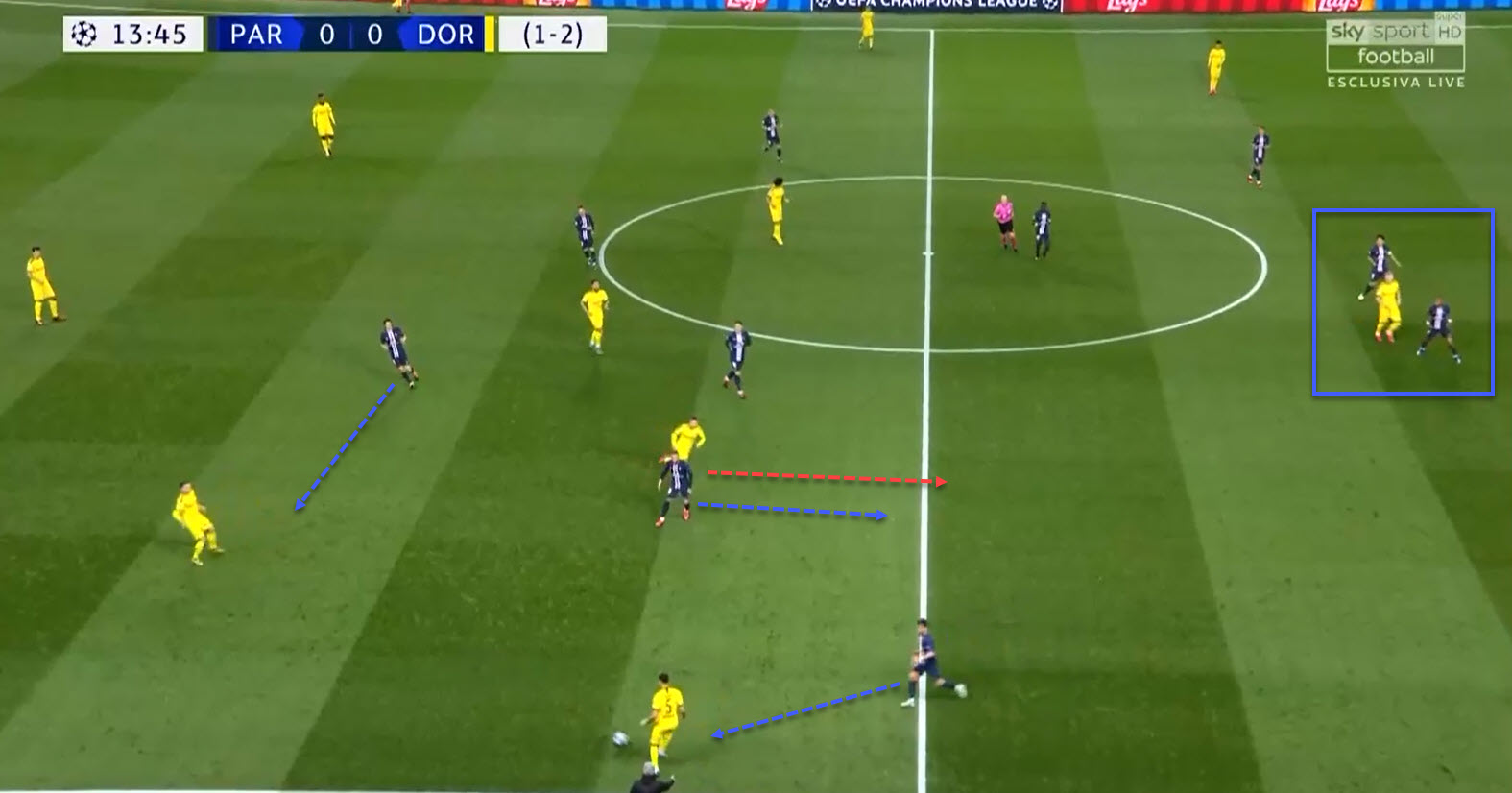 The idea behind their tactics, however, was a simple one on paper – when one of the forwards drop into their half-space to collect the ball, they can turn and create an overload along with their respective full-back on the opposition’s defender.

In theory, that would look something like the graphic below but due to Paris Saint-Germain’s aggressive pressing tactics and compact defending, this was much easier said than done. 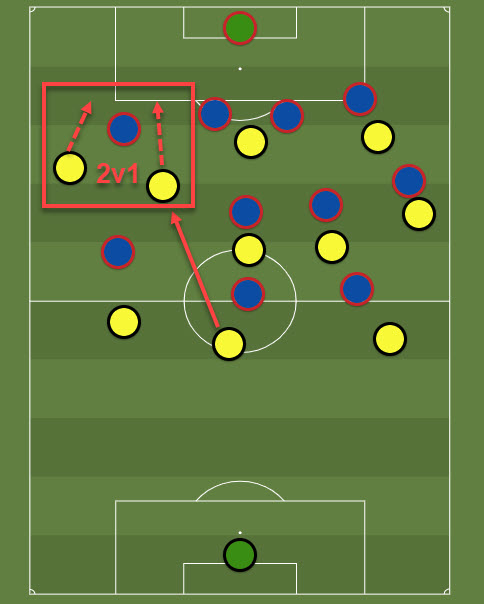 Dortmund were at their most potent when they could switch play quickly and strike with their pace on the transitions but for the vast majority of the game, that was simply not possible to execute successfully.

For the visitors, this was definitely a game of two halves and the second one finally saw the emergence of the team we know is somewhere out there. Unfortunately, this couldn’t last and Paris Saint-Germain were visibly trying to deflate their opposition and calm the proceedings.

The difference in the tempo and the shifting of the tides is best visible from both the possession stats and the attack frequency throughout the clash, both of which can be seen in the graphic below.

Notice the difference in domination and aggressiveness between the two halves as Borussia Dortmund had the upper hand coming into the second part of the clash. The ideas behind their attacks were mostly the same but with a couple of factors now playing a role in the outcome.

Firstly, PSG’s PPDA values increased from 7.4 to 12.0 while Borussia Dortmund’s drastically dipped from 25.3 to 6.2, meaning that the hosts weren’t as aggressive in their intercepting anymore so the Germans had a much calmer build-up phase to get the ball into the final third.

Once there, the ideas remained the same – create overloads and get into dangerous positions out wide where the ball can either be cut back or sent into the box. To get there, they used the third-man principle combined with the overload idea we presented earlier in this tactical analysis.

Notice below how that would occasionally wok for Borussia Dortmund’s attacking tactics. One of the forwards drops deeper into his half-space, dragging and occupying the markers only to play a quick one-two that ejects the full-back into newfound space.

The second factor that also visibly enhanced their activity was the introduction of Julian Brandt who was consistently supporting the attacks in the final third with his movement. As soon as the forwards sprinted into the box, he would move into their vacant spot, creating overloads on the flanks.

You can see an example of how the Germans used this same principle to eject their forward into space as they create a numerical superiority that gives them the security to recycle the ball in case PSG cover their gaps successfully.

In this instance, Brandt didn’t even touch the ball but his presence gave his team an additional option if the ball was to be recycled backwards. Often, he would receive the ball in that zone and then he was free enough to either distribute it further or have a shot on goal himself.

Interestingly enough, they seemed to favour the right side quite a bit as a total of 21/40 attacks were built through that flank with the highest xG value of 0.15.

Ultimately, however, Paris Saint-Germain were disciplined enough to control Borussia Dortmund’s second-half resurgence and once Emre Can saw red in the final minutes of the game, there was simply no coming back anymore.

At the end of the day, with an xG total of 0.98 compared to their opposition’s 0.31, Paris Saint-Germain are deserved victors and will be heading into the quarter-finals of the Champions League with their head held high.

Of course, it still remains to be seen whether we’ll get to enjoy the rest of this fascinating campaign or not since the coronavirus could very well cancel the whole tournament. Let’s hope for the best.