For what has been dubbed by many across social media as a farmers league in recent months, the Bundesliga sides in both the Champions League and the Europa League have performed exceptionally well, hopefully putting that ridiculous jibe to bed. All three teams left in the Champions League won their first legs, and the sides playing in the Europa League all proceeded to the next knockout stage.

Borussia Dortmund’s fixture against Paris Saint-Germain hangs perfectly in the balance. The Germans won the first game 2-1, with PSG scoring the important away goal. It couldn’t be closer, and although I doubt anyone thought this tie would be anything different, you could be excused for being disappointed the first game ended just 2-1, with both sides being incredibly goal friendly this season, whilst both have had their defensive issues. Perhaps we may see an explosion of goals as the second leg progresses, for PSG will have to score and will, therefore, have to take a few risks, but at the same time, the first game highlighted that both sides can play with the discipline required from such an occasion.

This tactical analysis will give an in-depth analysis of the tactics we may see in Wednesday night’s game.

It seems likely Dortmund will continue with a 3-4-3 with no changes from the lineup that beat PSG 2-1 two weeks ago. Haaland has now gone two games without a goal so PSG will certainly have a task on their hands to extend that goalless streak, and Jadon Sancho continues to show why he is widely considered to be a truly generational talent, notching his 15th league assist this weekend as Dortmund got a vital victory over Borussia Mönchengladbach. The front three will most likely be completed by Julian Brandt.

In midfield, Emre Can will continue alongside Axel Witsel where he has impressed so much since his January transfer, adding some much-needed steel and discipline to Dortmund’s midfield. Achraf Hakimi and Raphaël Guerreiro have both been outstanding, particularly going forward, this season and will occupy the wing-back positions, creating a midfield four, or even a front five, in attack, whilst dropping into the defence when out of possession to create a 5-4-1 formation, with Sancho and Brandt doing likewise and dropping into the midfield.

It’s difficult to say what PSG will do with their formation, as I will go into more detail of in the next section, however, there are a couple of changes that will be made. Firstly Marco Verratti is out of the tie following his booking in the first leg. This is a huge loss for PSG as he displayed his importance to the side in the first tie with an excellent performance in midfield and Can and Witsel will undoubtedly be licking their lips at the prospect of a Verratti-less PSG midfield. In his absence, Leandro Paredes may well get the nod, or perhaps Marquinhos will be brought into the midfield. This would mean Presnel Kimpembe or Thilo Kehrer would line-up alongside Thiago Silva at centre-back, or perhaps it’ll be all three if they go with three at the back again. Juan Bernat and Kehrer have played at full-back in the two league games since the Dortmund defeat, however, it wouldn’t be surprising to see Laywin Kurzawa or Thomas Meunier start as they did in the first leg. Below we can see the lineups from the first game.

Should they field a 4-2-2-2 it is likely they will start Mauro Icardi up front with Mbappé, whilst Neymar and Di Maria play as attacking midfielders. 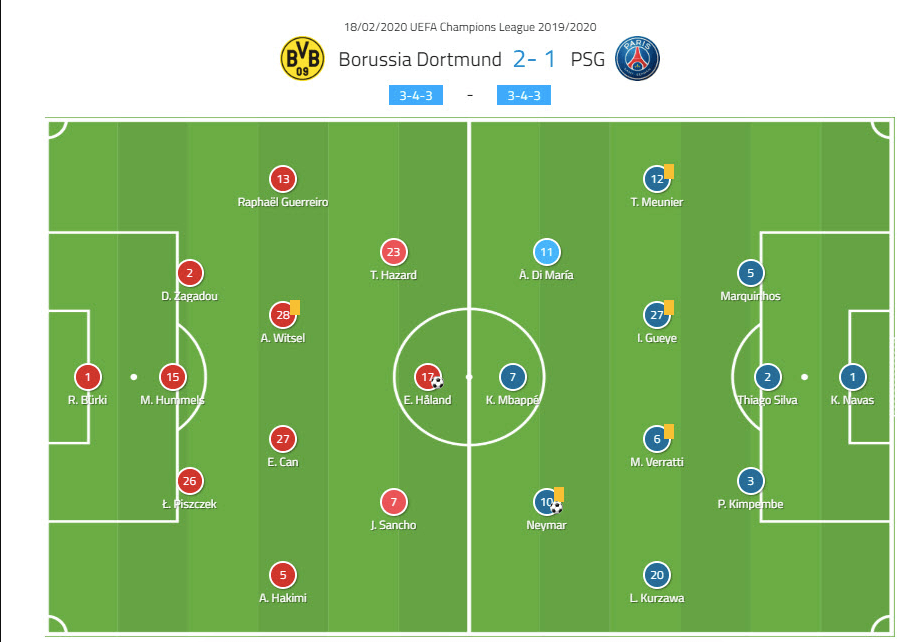 In the first game, Thomas Tuchel made the unexpected decision to mirror Lucien Favre’s 3-4-3 formation in an attempt to nullify the threat created by Dortmund potentially overrunning them in midfield, whilst meaning Łukasz Piszczek, Mats Hummels, and Dan-Axel Zagadou, Dortmund’s back three, would spend large portions of the game having to deal with Neymar, Kylian Mbappe and Angel Di Maria. Due to the obvious threat posed by this front three, Tuchel was no doubt planning to use this front three as a way to ensure Dortmund’s wing-backs, Raphaël Guerreiro and Hakimi would have to play with more discipline than normal and would, therefore, be slightly restricted in their attacking influence, due to making sure Dortmund’s back three weren’t isolated in a 3 v 3 situation. If PSG could catch Dortmund in such a situation then there would be plenty of opportunities for the front three to manoeuvre and find space.

Both Neymar and Di Maria were instructed to operate in the half-spaces in the first leg and receive the ball in between the lines. From these areas, it meant they could turn and face the opposition and not have to play with their back to the defence, whilst it opened up opportunities for Mbappé to make runs in behind.

It didn’t quite work out in this way, as Neymar and Di Maria were often seen dropping deep into midfield to receive the ball, which was further away from goal than I’m sure Tuchel would have liked, and subsequently, Mbappé was often left isolated up front. This meant Dortmund’s back three were able to mark the singular forward at times, often having one of the back three man-mark him. As soon as he received the ball they were aggressive in pushing him backwards towards his own goal. We can see how deep Neymar was at times compared to Mbappé in the image below. 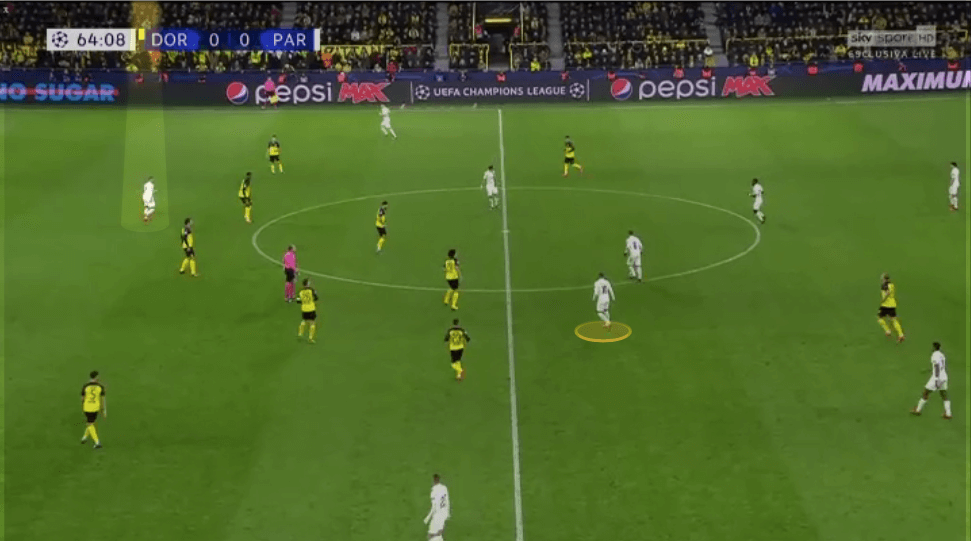 PSG have certainly rediscovered their mojo following the week where they drew 4-4 with Amiens, lost 2-1 to Dortmund and scraped a 4-3 win over Bordeaux the following weekend. This was the first time they had conceded nine goals in three games under the ownership of Qatar Sports Investments.

Since the 3-4-3 vS Dortmund they have stuck to the 4-2-2-2 beating Bordeaux as mentioned above, but subsequently dispatching Dijon 4-0 and Lyon 5-1 in impressive fashion. Over these three games, Mbappé has scored six goals, Pablo Sarabia twice, Neymar twice, and Icardi and Edinson Cavani have notched as well, showing their attacking players arrive at this game well in form. I would, therefore, be surprised to see PSG adapt to Dortmund’s game plan and instead will look to impose themselves on the visitors with the formation and recipe that has worked so well for them so far this year and since the Dortmund loss. Should they need to score they are blessed with goalscoring talent to bring off the bench to seek to impact the game. Below is the formation they used in their last game – a 5-1 win over Lyon. 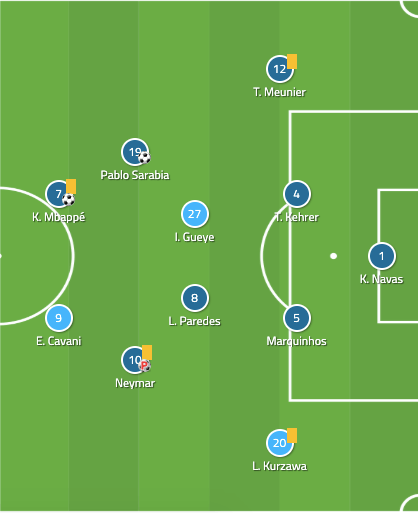 When playing this formation you will sometimes see PSG’s forwards operate in wide areas. This will pin back Dortmund’s wing-backs, and make Dortmund’s back three have to adapt to not playing against a forward all of the time. With two forwards potentially occupying five players, it allows PSG to create overloads in other areas. It also creates two options for through passes to their forward line. Staying out wide they can cut behind or go directly down the line, with the two attacking midfielders able to arrive late into central areas. 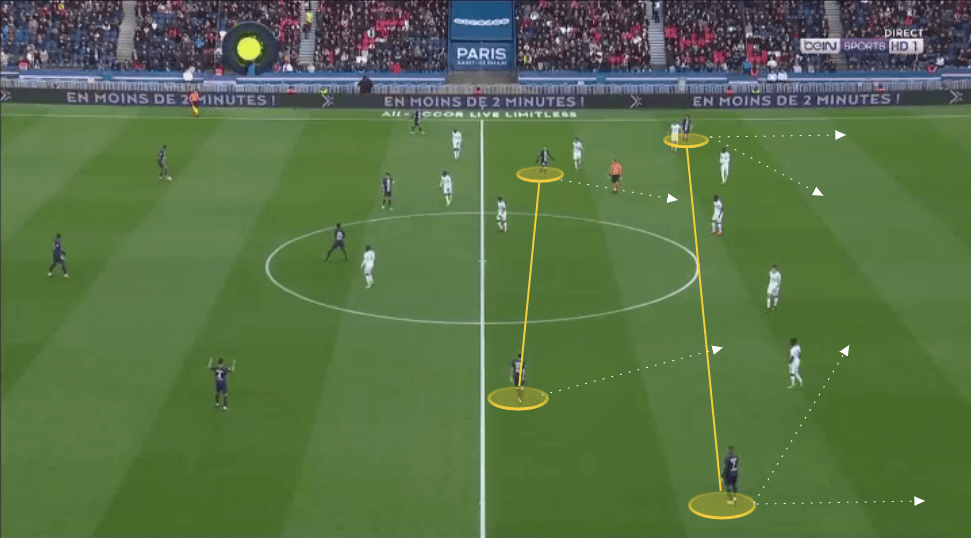 Should one of PSG’s forwards move centrally, you will likely see one of their full-backs push up high to create a front three which means their attacking players are still able to operate in the half-spaces. We can see this happening in the image below. 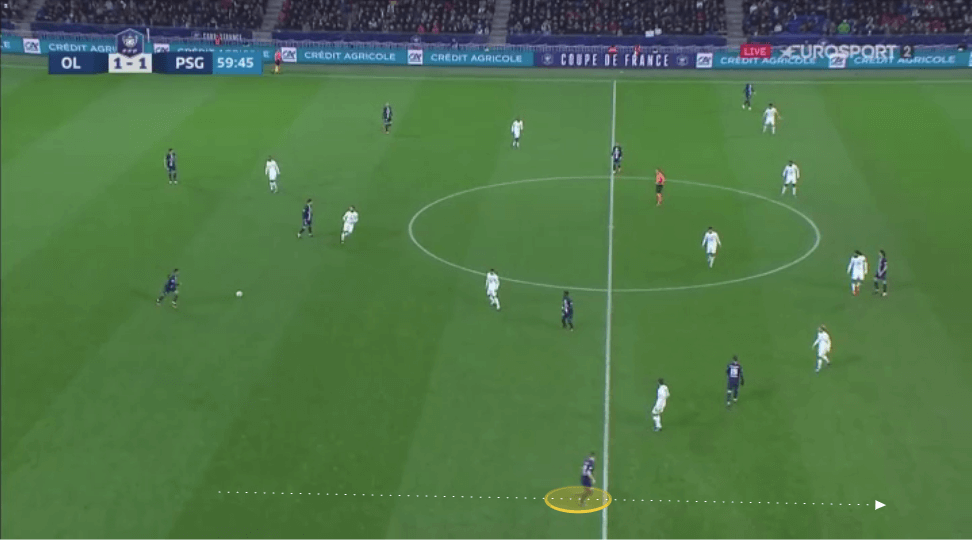 Of course Mbappé’s pace and ability in 1v1 situations is something Dortmund will have to be aware of. They will need to stop him from isolating Dortmund players in these situations and if he has space behind to attack, he could well punish the visitors. 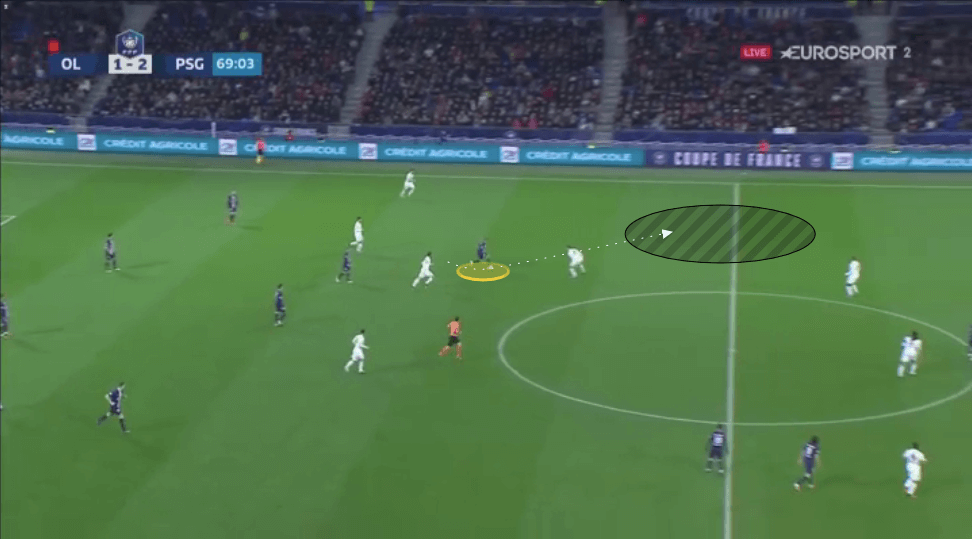 Dortmund’s attacking options and getting the best out of Haaland

If PSG avoid the 3-4-3, then I would expect to see Dortmund look to bypass the midfield when playing out from the back, taking out as many players with one pass as possible. In doing so I think it is likely we will see Haaland drop in to receive these passes and attempt to bring one of PSG’s central defenders with him, creating a 2 v 3 situation behind him for Sancho and Brandt, whilst Haaland can very quickly join the duo himself. 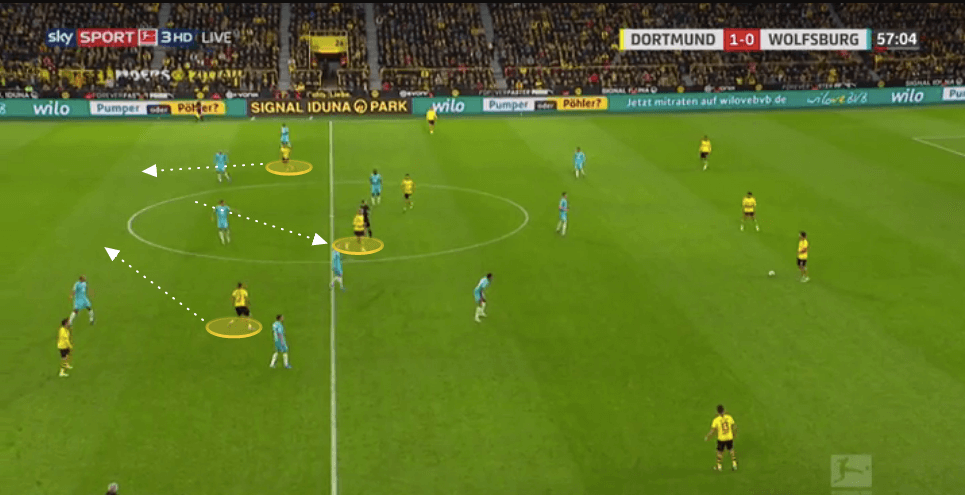 Dortmund will often employ a midfield box created by both of their midfielders dropping deep to create space to facilitate forward passes from the backline into the forward line. The width of the back three also stretches the opposition press and allows them to do this. Should PSG sit compactly and look to prevent this from happening, Favre has the option to use the width of his wing-backs to create angles to play these passes as we can see below. 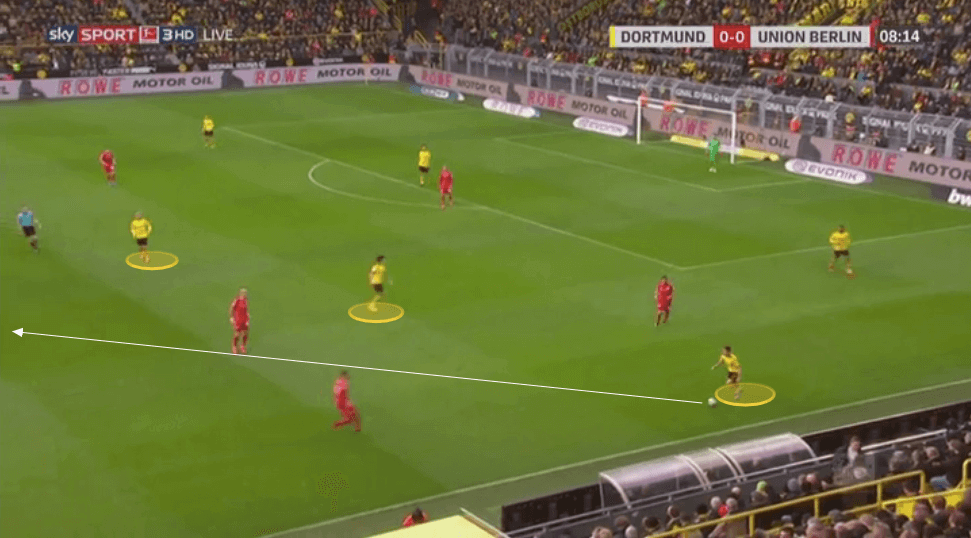 When receiving in these areas he will likely drop the ball back to the central midfielders who will either play the ball into the channels over the top of PSG’s defence, or out wide to the wing-backs who will be in wide areas with plenty of space, or Haaland can skip this part together and play outside straight away himself. Haaland is particularly dangerous with the ball in an advanced wide area while he himself is arriving late into the box looking for the ball to be cut back. 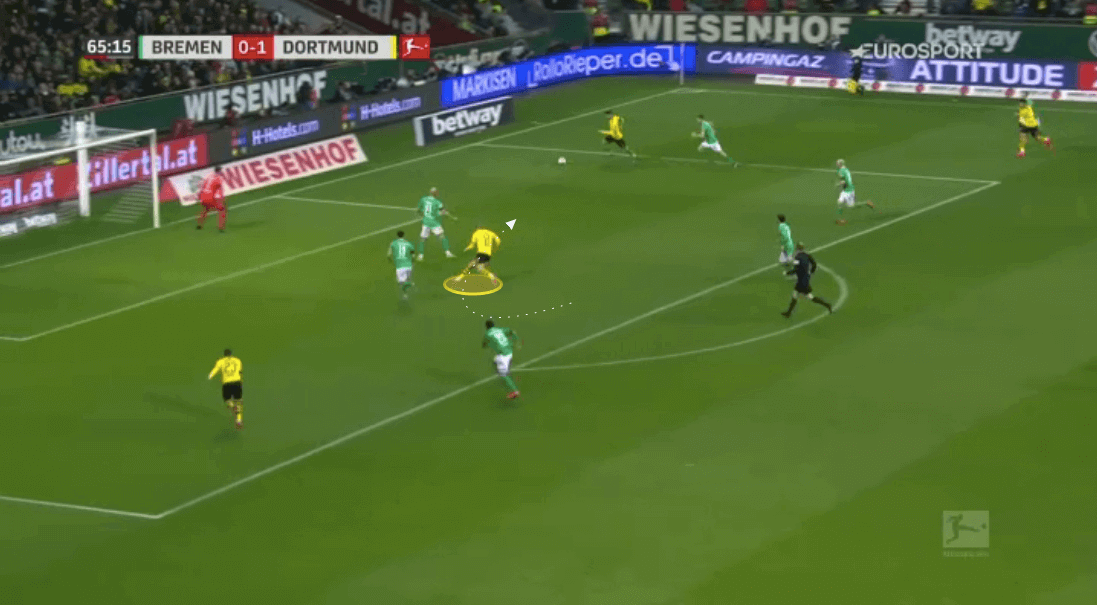 Dortmund will likely have less possession once again and will look to soak up the pressure from the hosts. The German side have players, namely Haaland and Sancho, who are considerably dangerous in counter-attacking situations, with the former thriving on space left behind the opposition defence. 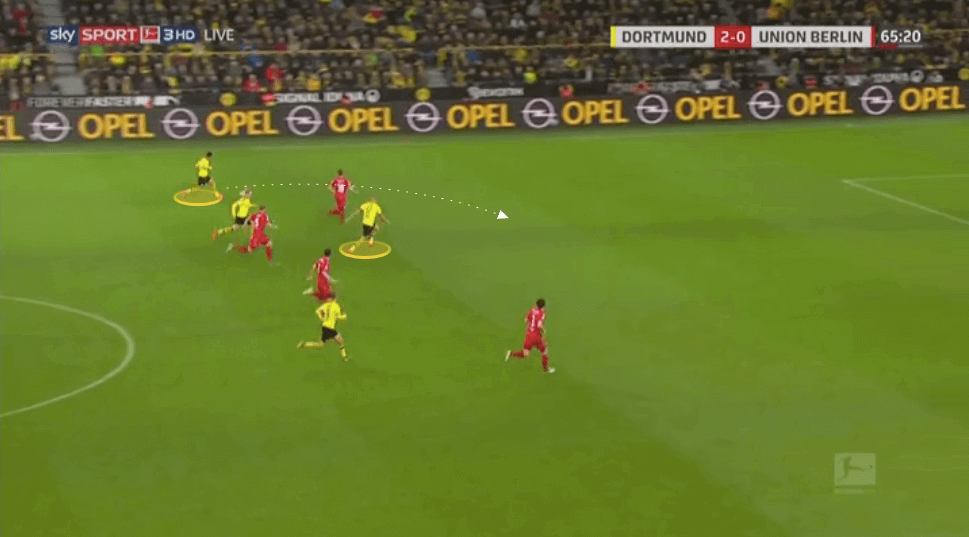 PSG did well to keep counter-attacks to a minimum in the first leg and their defence was compact, dropping into a back five themselves when out of possession. If they stick with the 3-4-3 then I would expect to see them continue to frustrate Dortmund in this way, however, should they switch to their 4-2-2-2 then their defence may well get stretched by Dortmund’s front three and I would expect to see Sancho and Brandt get far more space in wider areas, specifically on the counter.

Dortmund’s back three means they can commit more players forward in attack, and should at any point they need to score to progress or stay in this tie, then they can easily commit numbers forward to do so. In the recent fixture against Augsburg Piszczek was able to arrive late from the back three in an attack, becoming Dortmund’s eighth player committed to the attack, and receive the pass on the edge of the box to score. 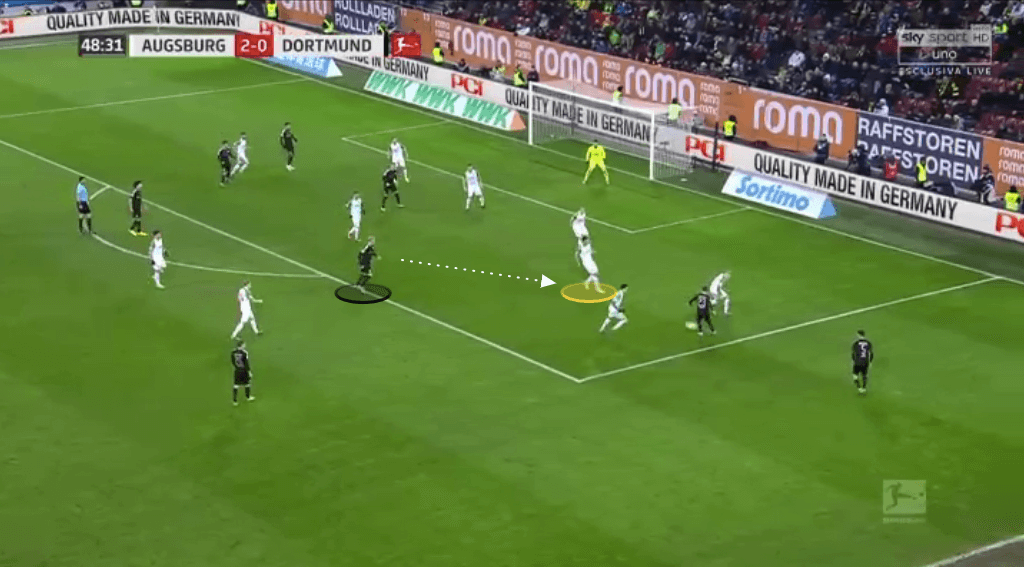 With Bayern Munich beating Chelsea 3-0 away from home in the first leg, and Leipzig getting an excellent 1-0 away victory themselves over last season’s finalists Tottenham Hotspur in their fixture, it is fair to say this tie is regarded to be the most in the balance.

As mentioned PSG have the away goal, so a close and cagey game will suit the hosts the most. But Dortmund have only failed to score on two occasions this season, with 0-0 draws against Barcelona and Schalke, and the most recent of these was all the way back in October. PSG, of course, have individual game-changers in their side, and with the home advantage, it wouldn’t surprise me to see them advance into the quarter-finals. However, I do expect Dortmund to score, so therefore this one could turn into a very open game, with PSG having to chase the tie from the get-go.