Achraf Hakimi and the development of the full-back position

It was slightly surprising to see Borussia Dortmund dominating the Bundesliga in the first half of the season. Under Swiss coach Lucien Favre Dortmund were not only successful but also playing beautiful football, led by stars such as Paco Alcacer, Axel Witsel, Marco Reus and the young Jadon Sancho.

Sancho is still playing to an extremely high level, while Reus is injured and Alcacer has stopped scoring. However, another player who is important to Borussia Dortmund’s success is the full-back, Achraf Hakimi. The Real Madrid loanee had a great half year at Dortmund and looks like another highly talented prospect for the European champions. Similar to the rest of the team he is fighting against a drop in personal form. Nevertheless, it is time to take a look at Hakimi, but not because of his talent.

In this article I want to discuss the role of the full-back. Hakimi is one of the only full-backs who can play on both wings without any problems. Usually, the young Moroccan prefers to play on the right side due to the fact that he is right-footed. However, Lucien Favre has used him as a left-back quite often due to injuries or a lack of quality in that position.

Playing on the left led to different challenges for Hakimi. One of them was the fact that he had to use his weak foot more often in order to dribble down the line. Although this is the classic role of a full-back and we actually saw it quite often, one action of Hakimi made me think: how can we use full-backs differently? Before we discuss Hakimi’s role, I will give you a quick overview of the different full-back roles.

In modern teams the winger moves inside, so the full-back is the only one occupying the wing. Still, he can be dangerous after switches when he is able to deliver the ball perfectly into the box. When the full-back pushes into the forward line, he participates in the build-up more actively and can then move with speed into the open space on the wing while receiving the ball. This movement is a tremendous challenge for defenders because they usually focus on the ball and the players close to them.

Borussia Dortmund under Thomas Tuchel, for instance, used the full-back that way. Ginter and Schmelzer were often able to surprise the defence and attack with speed against a defender who had to accelerate first. This gave them the possibility to get behind the last line fairly easily. Benjamin Mendy has had a similar role for Manchester City this season. 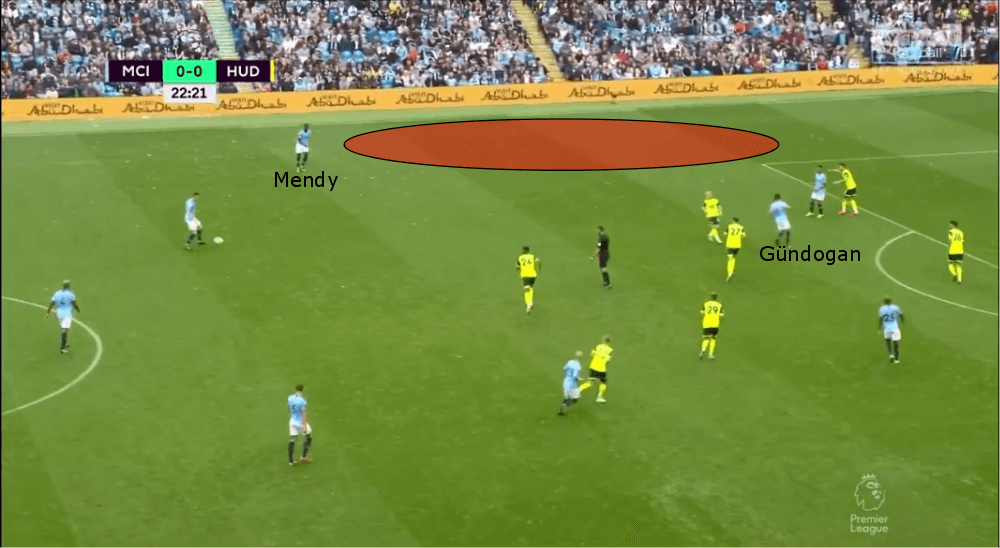 A slightly different role was introduced by current Manchester City boss Pep Guardiola during his time at Bayern Munich. Although he didn’t invent it, Guardiola was the coach who actively tried to use every advantage provided by them.

Again, there are different types. At Manchester City, for instance, the inverted full-backs move in the centre during the first stage of the build-up to create an overload in the centre of the pitch. This happened at Bayern as well. In Germany, Guardiola had stronger one-on-one wingers. 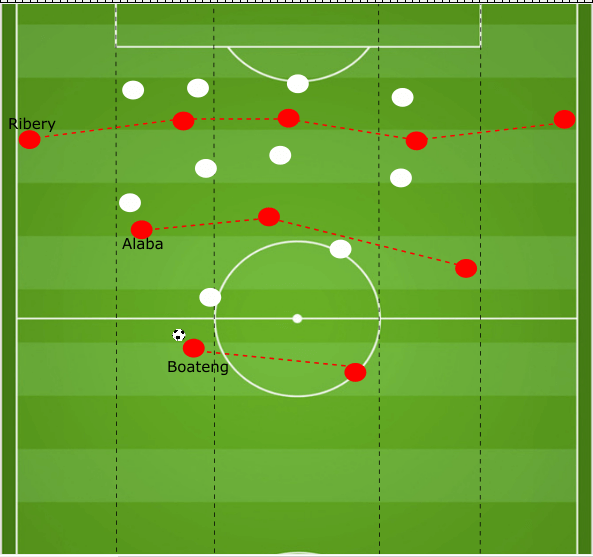 Either his team can play through the centre because of the numerical superiority due to the inverted full-backs, or they can pass the ball to the winger and gain space. It all depends on the reaction of the opposition winger who usually covers the full-back. If he follows the full-back, the diagonal passing option to the winger is open. On the other hand, when the opposition winger stays in his position, the team in possession can exploit their superiority in the middle of the pitch.

Manchester City sometimes uses the full-backs asymmetrically with Walker staying deeper. The other moves into the channel but does not necessarily participate in the build-up. 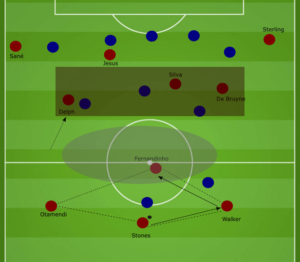 With the full-back moving through the half-space, the team in possession can either play a through-ball or the winger can dribble diagonally towards the centre. 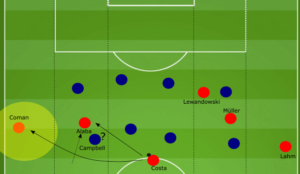 Here, Alaba opens the passing lane to Coman. The French winger has space to accelerate while Alaba continues his run and Bayern have a 2v1 situation against the full-back.

The dynamic role of Achraf Hakimi

The role of Achraf Hakimi is different when he plays as a left-back. His positioning doesn’t change, but it is more about his actions with the ball. Hakimi still hugs the touchline during Dortmund’s build-up. However, Lucien Favre allows him to use his strength in order to support the attack.

Hakimi is a surprisingly strong dribbler for a full-back. Additionally, he is right-footed as I already mentioned. This creates a unique opportunity for Dortmund to use him as an inverted full-back. Because he is similar to a winger, he can dribble diagonally towards the centre. So far, common defensive shapes are not prepared to defend a full-back dribbling towards the centre. Hakimi is skilled enough to actually take on a player with his speed.

The role is so interesting because it could be another useful attacking addition for teams facing a deep block. The difference between the winger and the full-back dribbling diagonally is the starting position and the reaction of the defence. While a winger traditionally starts from a higher position, the full-back can move inwards earlier in the attack.

Furthermore, a winger can be doubled-marked more easily because he only has a passing option backwards. The full-back, however, only faces one player on his way to the half-space.

Assume that the opponent defends in a 4-4-2. The strikers are usually inclined to cover the centre and shift to the side to press. This behaviour opens the space which Hakimi can exploit with his dribbling.

Overplaying the midfield line by dribbling

The main goal in possession for Dortmund is to overplay a defensive line either by passing or dribbling the ball. When Achraf Hakimi wins the one-on-one against the winger, he opens space, can pass the ball between the lines or make the defence collapse because someone has to pick him up.

This is especially true when the opponent is pressing aggressively and forcing the team in possession to the wing. Playing with a left-footed player on the left side has the disadvantage that the defence can immediately force your even more to the sideline. With a right-footed player on the left side, you can dribble quickly against the movement of the defence. This action is hard to defend against because defenders have to change direction.

The full-back position still has room for improvement. A lot of teams just use the full-back in a classic way. But, especially for teams facing deep defensive blocks, the role of Achraf Hakimi could be a useful addition offensively.

This article is just a quick introduction to the topic, to discuss the idea of using the full-back differently. In the future, I will take a closer look at the development of that role and analyse the advantages in detail.