On the 14th February this year the news was released that Atletico Madrid’s Argentine coach Diego Simeone had signed a new contract that would run until 2022. Most betting sites UK had expected Simeone to make the move to the Premier League but this won’t be happening now. There are few sides in top-level European football who have a playing style as closely linked to the head coach as Atletico, Simeone is a famously combative character who places great emphasis on certain intangible personality traits in his playing staff. This Atletico team is a living, breathing symbol of the way that he approaches football.

Their tactical structure is often considered to be defensive and destructive but, in truth, there are many positive aspects that we can take from examining the concepts used by Simeone in the various phases of play in greater detail.

This match came off the back of an impressive European display from Atletico as they beat Juventus 2-0 in the first-leg of their Champions League last 16 tie. Villarreal were interesting opponents, despite their relatively poor league form so far this term, they still provide a threat with their pace in attack and technical ability in midfield. 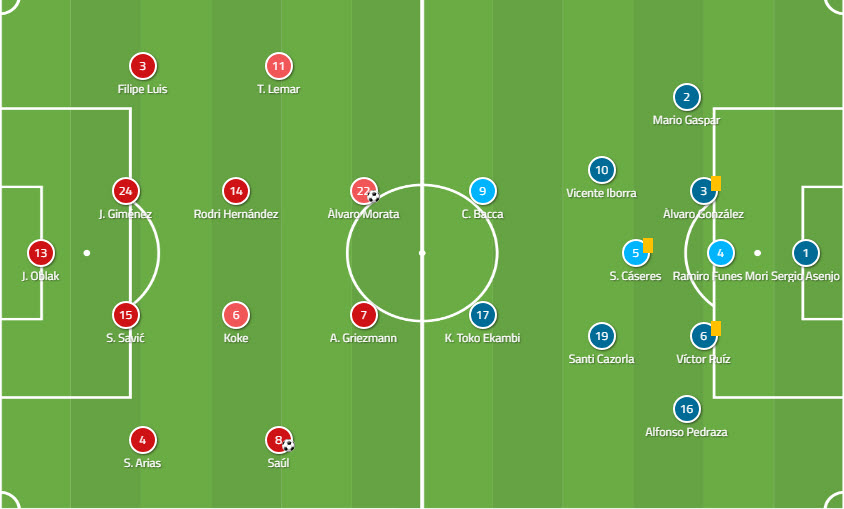 This season has seen something of a transition from Atletico in terms of their playing staff, veterans Gabri, Juanfran and Diego Godin have either had their minutes removed or at least reduced and the likes of Rodri, formerly of Villarreal, and Santiago Arias have seen themselves afforded a more important role.

The 4-4-2 is familiar from a Simeone team with the likes of Saul, on the right, and Thomas Lemar, on the left, being comfortable playing wide or taking up more central positions.

Villarreal on the other hand play in a 5-3-2 structure in their defensive phase with both wingbacks looking to move high when in possession of the ball. In midfield, the former Arsenal midfielder Santi Cazorla has been enjoying a new lease of life since his return to Spain from England.

Whilst it is unfair to consider Atletico to be a purely defensive side it is still important to accept that their defensive structure out of possession is perhaps the most impressive among top European sides. The entire unit works as one in the defensive phase in order to deny the opposition space to play centrally or between the lines, instead the opposing side is forced to attack in wide areas before looking to access the penalty area from the wing, Atletico are secure in their belief that they can repel most crossed balls. 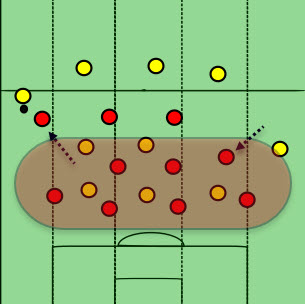 If the opposition look to switch the attack to the other side then it is simple for the midfield rotation to reverse with minimal effort for the Atletico midfielders to adjust their position. Throughout this match, we saw Villarreal struggle to find passing lanes inside the defensive structure despite repeated efforts to switch play and catch Atletico out of position. 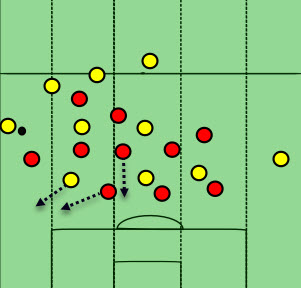 When Villarreal were able to affect the Atletico defensive block we saw interesting rotations that were obviously coached and planned to provide cover. Here Villarreal were in possession of the ball on the right with their right-sided wing-back Mario Gaspar, Filipe Luis, the Atletico left-back, was forced to move out to engage the ball and space was left behind him.

As Villarreal looked to take advantage of that space Jose Gimenez, the central-defender was forced to track the run into the wide area. Here a common result would see the entire defensive line shift across to cover Gimenez as he breaks out of position. This would, in turn, weaken the far side of the defensive structure. Instead, we would see one of the central midfielders quickly drop to cover the position vacated by Gimenez. This prevents the defensive structure as a whole from becoming weakened.

When looking to tactically analyse a match at any level it can be informative to consider the way that the sides look to build up in their attacking phase. There are several different methods that we see from top-flight sides. The likes of Barcelona and Manchester City prefer to attack as a single unit whilst others have a 5-5 structure when constructing their attacks. In this match we saw a clearly defined 6-4 split for Atletico when they attacked, what exactly does this mean though? 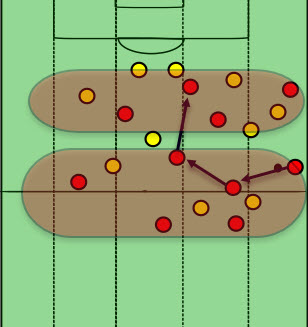 Here, we can see the two units that existed from Atletico in possession of the ball. In the initial stages of the build-up, both full-backs retained a deep line along with the two central midfielders and the two central defenders. This created a solid base of six players in deeper areas. Further forward the two wide midfielders and two forwards were in a group of four.

As the build-up advanced, of course, we would then see movement between the two units with one of the central midfielders and one of the fullbacks advancing to support the attack. This turned the structure into a 6-4 in favour of the attack, but by this point, Atletico had already been able to progress the ball forward securely. 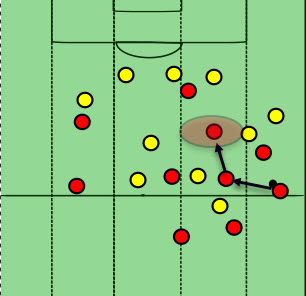 Another feature of the Atletico build-up phase saw the French international Antoine Griezmann occupy positions in the half-space to provide an extra option for Atletico to progress the ball forward. With Alvaro Morata providing the focal point for the attack and keeping the Villarreal defenders pinned in deeper positions we saw Griezmann consistently look to occupy the half-spaces on the ball side of the field.

Interplay to switch the ball

Another interesting aspect of the build-up phase from Atletico saw them utilise overloads on the ball near side of the field before escaping pressure to play to the wide midfielder who was free on the opposite side.

The technical quality of the Atletico players in tight areas speaks to the quality and quantity of technical ball work sessions that they use during training. Simeone is known to be someone who favours the use of various rondo’s to teach his team to be comfortable when receiving the ball under pressure. 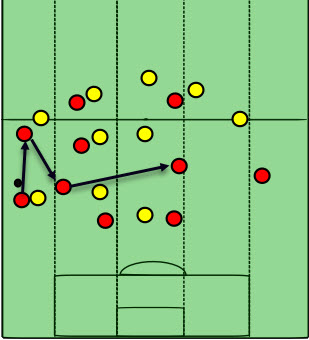 The fullback, wide midfielder and to central midfielders would combine in the wide and half-spaces to circulate the ball quickly past the first lines of pressure from Villarreal. When the passing lane would open the ball would then be switched across to the ball far wide midfielder who would be in space to collect possession and either play forward or continue the switch out to his full-back. 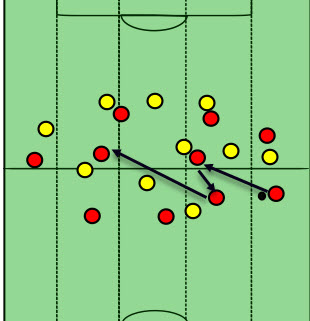 You can see the same mechanism utilised here as the ball is played from the right-side out to the left half-space where Thomas Lemar had the space to play forwards. These mechanisms made it increasingly difficult for Villarreal to effectively pressure the ball as Atletico were able to provide overloads in key areas to enable them to progress the ball.

Movement in the final third

With the signing in the January transfer window of Alvaro Morata, we have seen Atletico give them a second viable option to partner Griezmann in the attack. Diego Costa has been poor this season and appears to have regressed significantly. The early signs are that Morata and Grezmann are developing an impressive partnership. This was especially evident in this match. 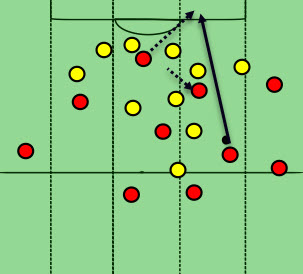 As we have already discussed we would see Girezmann look to drop off into the half-spaces in order to support the progression of the ball. These deep movements would attract the attention of the Villarreal defenders closest to the French attacker and make them vulnerable to diagonal runs from Morata in behind.

As Morata made these diagonal runs to turn the Villarreal defenders the ball would be played into the channels for him to attack. 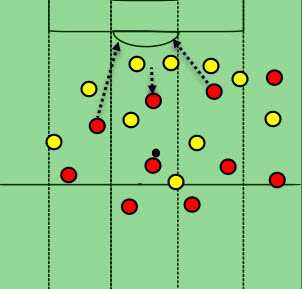 Morata played very much as the fixed central striker who provided a focal point for the Atletico attack. The Villarreal defenders struggled to cope with his movement both in behind them and closer to the ball when he dropped off the line. When Morata dropped in to receive the ball to feet he would give the likes of Griezmann and Lemar the space that they needed to move forward to attack the channels in between the defensive players.

In the end, this match was relatively close, with Atletico coming out 2-0 winners. In truth, however, they were comfortable throughout with their defensive solidity once again proving too difficult for the opposition to break through.

With the likes of Thomas Lemar and Antoine Griemann offering movement to an already exceptional technical midfield, we will see Atletico continue to impress. I would not be surprised to see them challenge deep into the Champions League this season.