Slow and predictive: Why Arteta’s approach failed to turn the tides against Villarreal – tactical analysis

With a 0-0 draw on the night at the Emirates, Villarreal have secured themselves their first-ever UEFA Europa League final in the club’s storied history. And with that, Unai Emery reached his fifth final of the competition in only eight years, winning three of those. Now, with Mikel Arteta and Arsenal out of the way, he will have to face another Premier League titan for the title – Manchester United.

The Red Devils have beaten their Serie A counterparts and could pose a serious threat to the Yellow Submarine. But how exactly did Villarreal secure their place in the grand final? This tactical analysis will aim to demonstrate both teams’ tactics to answer that question.

Starting the analysis with the lineups, we can already see that there were some changes in both teams. Arsenal lined up in a 4-1-4-1 system that saw both full-backs replaced as Héctor Bellerín and Kieran Tierney joined the starting XI. With Dani Ceballos out of the picture due to suspension, we saw Thomas Partey as the lone pivot.

Bukayo Saka and Nicolas Pépé were the wide men again while Martin Ødegaard and Emile Smith-Rowe had more central roles. The biggest change from last week, however, was the return of Pierre-Emerick Aubameyang who was finally fit to start the game and lead the lines in attack. 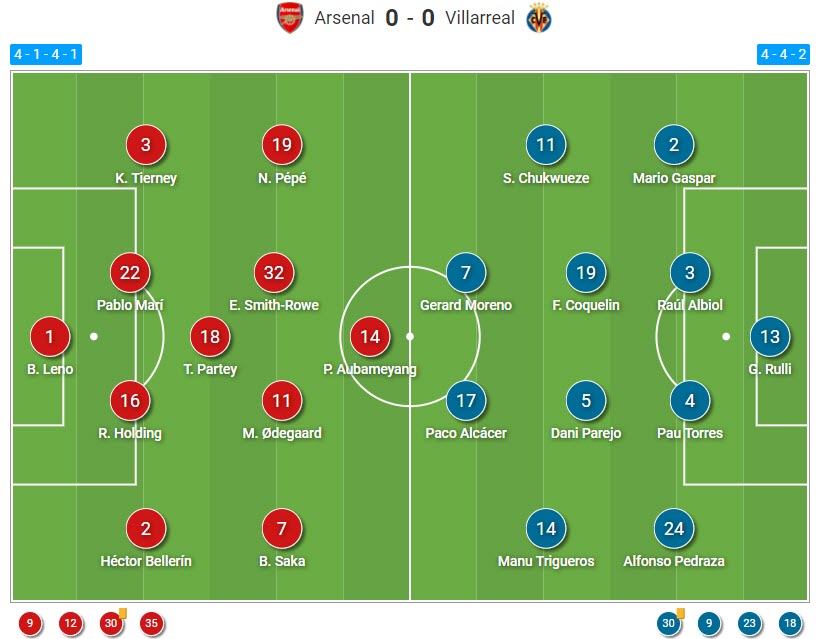 Villarreal, on the other hand, retained their standard 4-4-2 structure with only two changes from last week. With the injury of Juan Foyth, Mario Gaspar was given a nod and with the absence of Étienne Capoue, Emery opted for Francis Coquelin right from the get-go.

The rest of the lineup was unchanged as it served the Yellow Submarine well in Spain and they were hoping for a repeat in England. Even though they were put under a lot of pressure, the defence held on for a well-deserved trip to the final.

Even though Villarreal were excellent in the defensive phase of the game, Arsenal didn’t help themselves with rather methodical and slow build-up tactics. The Gunners enjoyed more of the ball throughout the clash but couldn’t create enough to ultimately threaten the opposition’s goalie.

The home side’s best chances arrived through the wide areas with both Pépé and Saka once again taking the spotlight. Arsenal aimed to create triangles on the flanks to try and either isolate their wingers with the full-backs or thread balls for runners from the deep.

The build-up sequence would usually start with either two or three players in the back as Tierney served as an LCB in possession and more of an LB out of it. This gave Arsenal a 3v2 numerical superiority against Villarreal’s 4-4-2 defensive shape and enabled them to progress up the flanks. 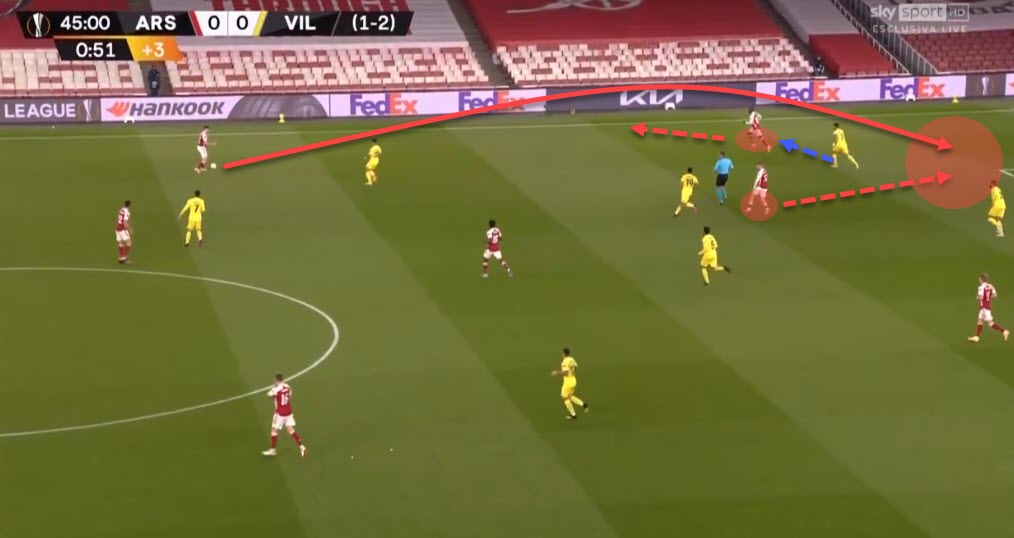 It’s there that they aimed to use triangles to bypass the compact block. Tierney would usually push up with the ball due to that 3v2 superiority and then combine with Pépé (or Saka, since they interchanged positions) and Smith-Rowe. You can see such an example in the image above.

Notice how the movement out wide drags the Villarreal defender and creates a pocket of space for Smith-Rowe to exploit with a run from the deep. Tierney sees the run and attempts a lofted ball towards the box. This was something Arsenal were trying to accomplish throughout the game.

Let’s take a look at another example that shows us a very similar situation. Again, 3v2 (or even 4v2) in the first phase of build-up, Tierney pushes higher, the defender is dragged away and Smith-Rowe charges into space to be met by a ball from the deep.

And it was their left side that enjoyed far more success in that regard. Arsenal were constantly getting the better of Villarreal defenders on that side, winning offensive duels and getting into positions to send the ball into the box. However, as much as we saw them insist on the left side, most of their attempts were in vain.

Below is a graphical representation of those offensive duels (left) and the subsequent crosses (right) that seemed to be a major part of their attacking tactics on the night. With the introduction of Aubameyang, Arsenal were deploying far more balls into the box in an attempt to find their lethal finisher.

However, as we can see, the majority of their crosses from the left were unsuccessful.

Intriguingly, the right side was far more productive even though Arsenal couldn’t win as many duels there. This is also a testament to Villarreal’s defensive solidity, which we will explore more in the next section of our tactical analysis. But due to a rather slow tempo in the first half, Arsenal couldn’t recycle possession quick enough to effectively dismantle the defensive block.

That meant that once again, just as was the case in the first leg, they were forced backwards and sideways, all the time inviting pressure from Villarreal. The more they struggled to bypass the defence, the higher the opponent pushed. With the repetitive sequences and predictive tactics, Arsenal couldn’t create much in the opening 45 minutes of the clash.

Villarreal set up their defensive block in a regular 4-4-2 structure that would then expand as they transitioned into a high press. Generally, it was a tale of two halves for them as they pressed aggressively in the first and then progressively dropped off in the second. This did pose an issue for them, especially with Samuel Chukwueze’s substitution, as they lacked a clear outlet to escape Arsenal’s pressing and counter-pressing.

Defensively, however, they were extremely disciplined and used smart rotations to shut down Arsenal’s main connections out wide. Let’s look at an example of that down below. We can see they are initially in their 4-4-2 structure with each player having a clear assignment in a man-marking system.

Paco Alcácer and Gerard Moreno are in the first line with one always keeping Partey in his cover-shadow and following the ball-carrier at the same time. Coquelin and Parejo are sticking to the no.8s while the wide ‘midfielders’ track the wingers who aim to drop to combine.

As the ball is inevitably recycled towards the flanks, as we’ve already mentioned at the beginning of this tactical analysis, Villarreal rotate their defensive block. Both Ødegaard and Smith-Rowe would attempt runs from the deep or out wide but were tightly followed by one of the defenders while the full-backs then pushed higher to contest the ball. 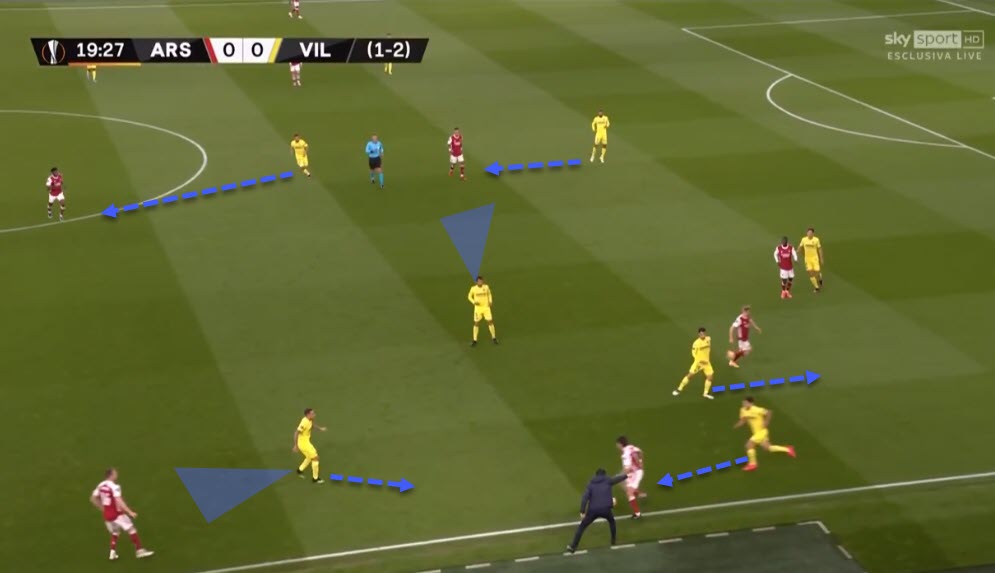 Note in the next image above how that sequence plays out and with Alcacer dropping, Villarreal attempt a collapse near the touchline. Generally, Arsenal still managed to outplay the block on some occasions but couldn’t create enough due to that lack of speed we talked about. The system itself seemed like a good foundation but it’s difficult to escape the fact that their issues were rooted in individual mistakes.

As the game went on, Villarreal dropped deeper and applied less and less pressure on the ball. However, the home side still managed to misplace passes or just give away the ball rather cheaply in the middle and the final thirds of the pitch. These lacking final balls or just blind attempts at crosses meant that despite having the tools to do so, Arsenal couldn’t create much.

If we take a look at their attempts at goal (left) and expected goals on the night (right), we can see that more clearly.

The solitary shot on target was accompanied by overall low xG values from all other attempts. Even though they registered many shots inside the box, most were from wide and far from ideal positions, through a crowd or just not precise enough to score a goal. Similarly, Villarreal also didn’t create much and they didn’t have a clear enough chance to score either.

However, there was a dose of control present in their attacking tactics that kept Arsenal at bay. The idea was to achieve superiorities in the central channels and then distribute the ball wide, similarly to how Arsenal operated as well. The Gunners’ press was improved from the last time the two teams met but it couldn’t yield them much.

Villarreal set up their build-up sequence with two centre-backs and two pivots, often tasking Pau Torres to do the progression from the backline. One of the forwards would also drop to create an overload on Arsenal’s defenders and advance that way. 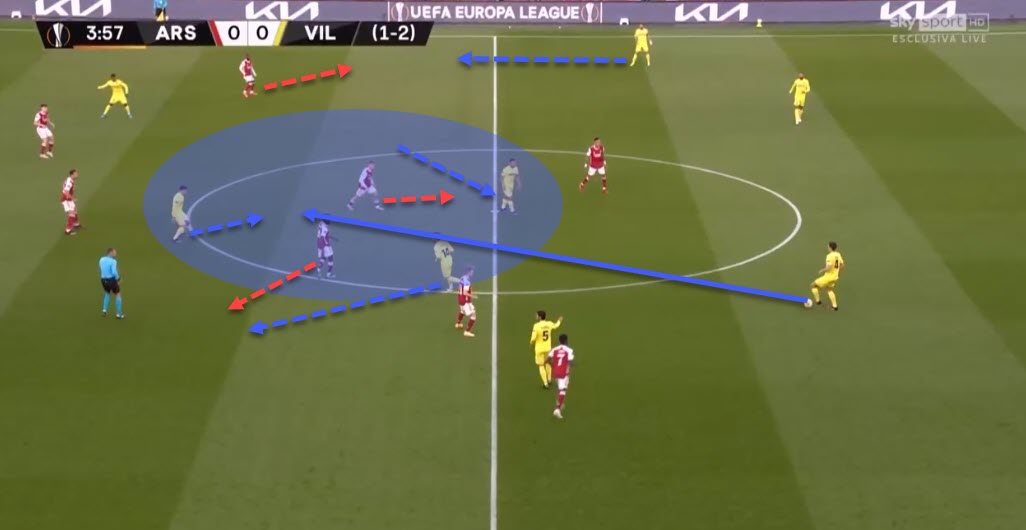 Note how the pivots then manipulate their counterparts to open a channel for a line-breaking pass. This was the setup that lead to a great chance for Villarreal early on in the game. The connections between Gaspar and Chukwueze is also very important here as the Yellow Submarine also aimed to create overloads on the flanks.

Once Torres threads the ball through the middle and Arsenal’s defensive structure, players like Moreno and Alcacer can be used to lay the ball off to the wings. This is exactly what happens in this instance and the ball is then switched from a congested left side to the free right side where an overload is in the making. 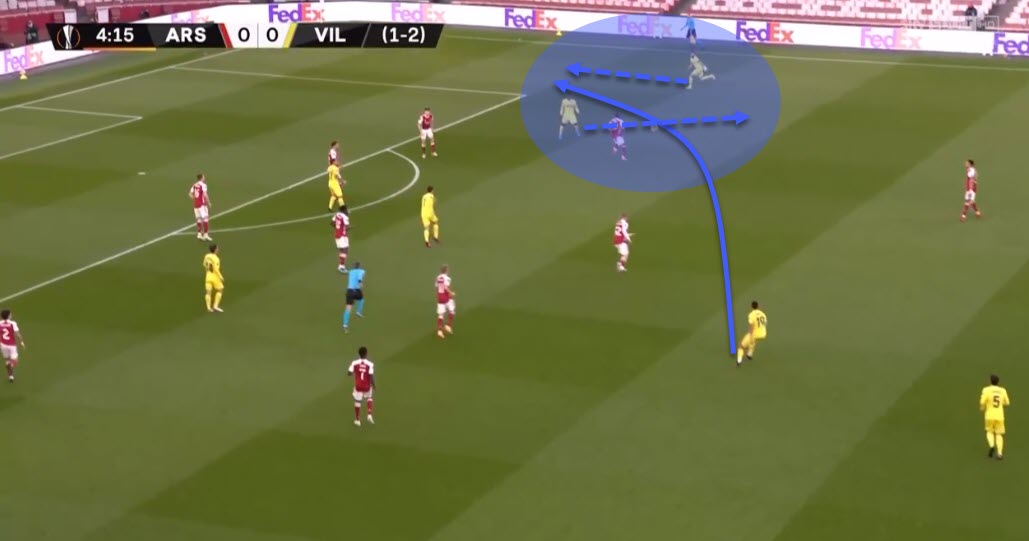 That sequence of dropping a player to overload the midfielders and then do a lay off is a very common pattern we often see in Villarreal’s tactics. As mentioned, it is used to overload but also to drag defenders out of position, opening space in other areas of the pitch. Let’s explore two examples of how that worked in the game.

In the first image, we can see Bellerin pulled out of position in an attempt to stop Villarreal’s central progression but that leaves Alfonso Pedraza open for a quick lay off. The away team can quickly advance up the pitch through the wide areas soon after that. 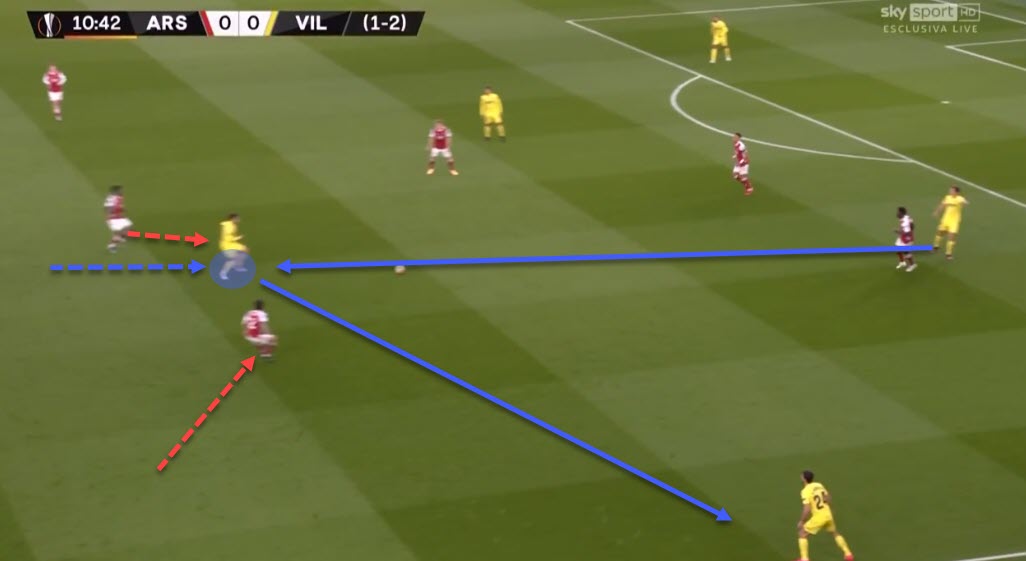 Similarly, on the other side, we see Arsenal’s midfield overloaded again as the same sequence unfolds rather quickly to achieve progression. A dropping player from the higher areas receives from the backline and immediately lays it off first time to the full-back who’s starting to sprint into space beyond his marker.

And while the onus certainly wasn’t on dominating the opposition but rather on defensive solidity, Villarreal did enough to fend off Arsenal’s pressing and keep their goal safe.

After a hard-fought victory, Emery is in yet another Europa League final, this time with ‘debutants’ Villarreal. Arsenal had the tools to advance but couldn’t create enough to mount a comeback at the Emirates.

Credit has to be given to La Liga representatives who fully deserve this win. Can they beat Manchester United in the final? That’s a question that will soon be answered too.