In a potential La Liga title decider, Barcelona weren’t able to topple Atletico Madrid at the Camp Nou to jump over their direct rivals in the table. Diego Simeone’s defensive tactics got the better of Ronald Koeman but inadvertently gave Real Madrid a huge advantage too.

This tactical analysis will take a deeper look into both teams’ tactics and tell you how exactly the two Spanish giants shared the points last Saturday.

Koeman didn’t experiment too much with his lineup and we saw Barcelona in one of their strongest XI iterations. In a 3-5-2 system, we saw Marc-André ter Stegen in goal and a trio of Gerard Piqué, Óscar Mingueza and Clément Lenglet in front of him. The midfield was comprised of Sergio Busquets, Frenkie de Jong and Pedri while Sergiño Dest and Jordi Alba manned the wingback roles.

Lionel Messi and Antoine Griezmann completed the lineup up front. Koeman didn’t make too many changes until later on in the game apart from a forced substitution that saw Ilaix Moriba replace Busquets after around half an hour of play. 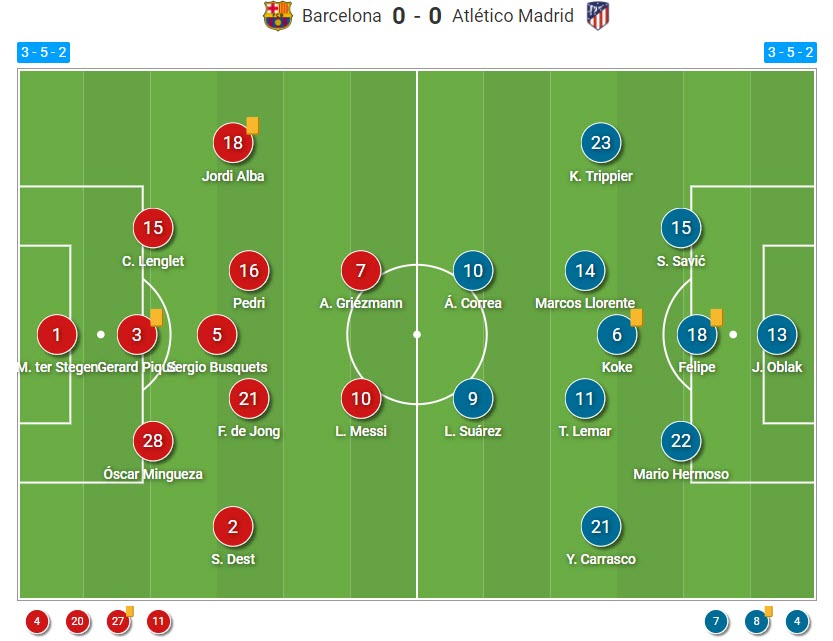 Interestingly, Atletico Madrid were also deployed in a 3-5-2 formation and it mimicked Barcelona’s own 3-5-2. Jan Oblak was in goal while the backline was comprised of Mario Hermoso, Felipe and Stefan Savić. Kieran Trippier and Yannick Carrasco manned the wings with Koke, Thomas Lemar and Marcos Llorente in midfield.

Former Barcelona star Luis Suárez and Ángel Correa completed the lineup in the forward line. Simeone was also forced to take off Lemar early due to an injury, replacing him with Saúl Ñíguez in the first half.

It doesn’t surprise that Atlético Madrid’s defensive tactics were the highlight of the game. Simeone opted to give Barcelona the control of the ball while he focused more on preventing central progression and forcing the Catalans out wide. Off the ball, Atlético Madrid were deployed in a 5-3-2 structure, staying very compact and narrow.

We can see that lineup in the image down below. Barcelona’s key targets are all within Atlético Madrid’s defensive structure and the Rojiblancos are trying to divert the Catalans’ possession out wide. Notice how both Alba and Dest are essentially the only advanced options that are accessible for Barcelona in this frame. 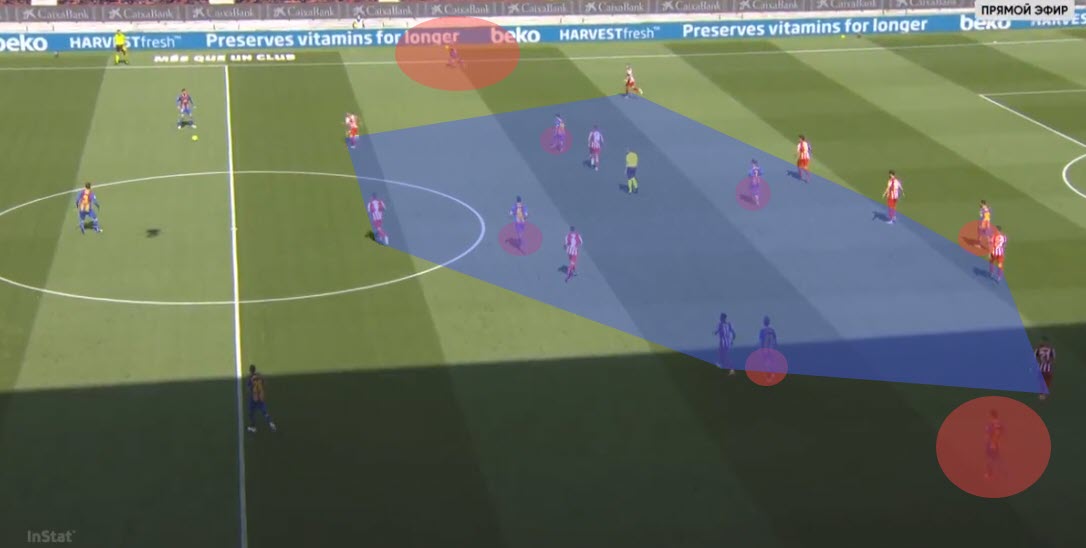 And that’s essentially the story of the first 70  minutes of the game where Barcelona were devoid of any ideas on how to successfully dismantle the opposition’s block. However, there were pockets of space the Blaugranas could exploit but were largely unable to.

Atlético Madrid were compact and narrow but there were spaces left between their first two lines of defence. Occupying those spaces between the lines was the best way for Barcelona to threaten their opponent. Finding Messi, Griezmann or Pedri there was sometimes used to quickly advance up the pitch. The best way to access that space was to draw Atlético Madrid out of their compact shape and then play through it. 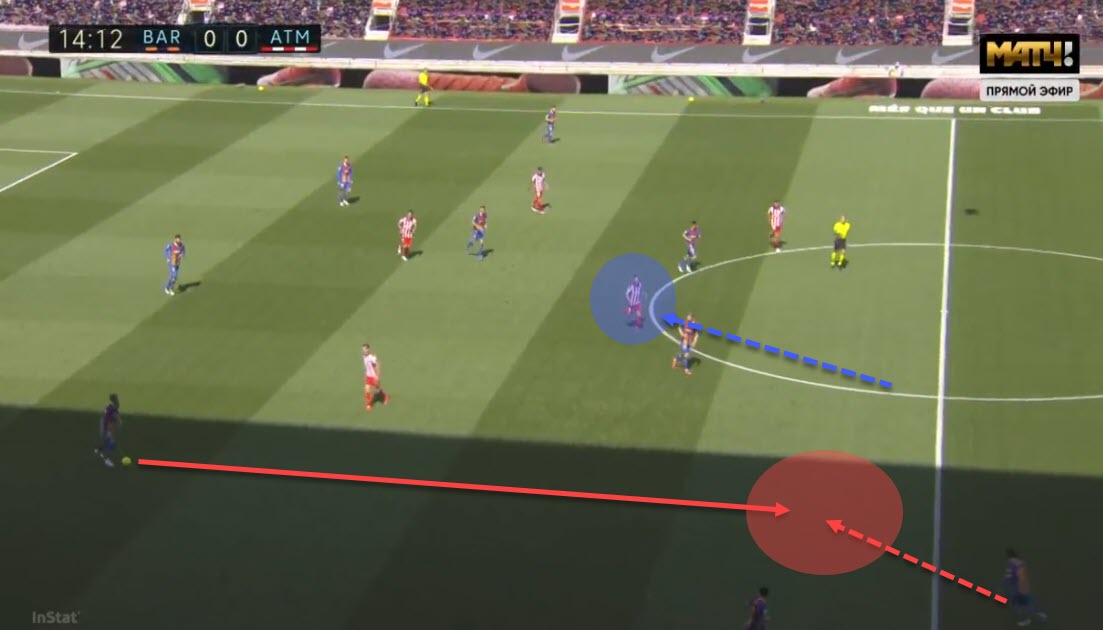 You can see a similar situation in the image above. Atlético Madrid have been drawn out and are engaging in a high press. The main player to highlight here is Koke as his jump opens the space between the lines that can be exploited by Messi. By quickly recycling the ball across the backline, Barcelona progress through Mingueza and find the Argentine free.

Unfortunately for the hosts, there were not too many scenarios in which they were able to do that and Messi was mostly forced to drop far too deep and receive just ahead of the halfway line. Intriguingly, that was also how one of Barcelona’s biggest chances came to fruition but that was entirely down to Messi’s magic and not due to the Catalans’ impressive tactics.

Down below is an example of such deep positioning from the Argentine, caused by the compact and disciplined Atlético Madrid defensive block.

Notice how once again there are no easy and accessible routes down the middle as Atlético Madrid have successfully shut down all chances for central progression. Similarly, while Griezmann is pinning the centre-backs, he is effectively isolated and marked out of the attack.

The only viable path forward is once again through the wings since the half-spaces are also well controlled by Simeone’s men. This forced Barcelona to recycle possession and look towards their wingbacks to offer them an outlet.

However, that brings us to a glaring weakness in their structure and the next section of our tactical analysis.

Koeman’s 3-5-2 system has brought many positives to a largely struggling team in 2020/21. However, with a two-man ‘striker’ partnership up top, it makes their attacks overreliant on the wingbacks for any sort of width. In games where Alba and Dest/Sergi Roberto are comfortable and can outplay their counterparts, Barcelona can still thrive.

But once they’re nullified in 1v1 duels, the Catalans lose their only presence in the wings. Let’s start from the shape itself, which can immediately offer us some answers. Below is Barcelona’s pass map on the night and it also includes their players’ average positions. 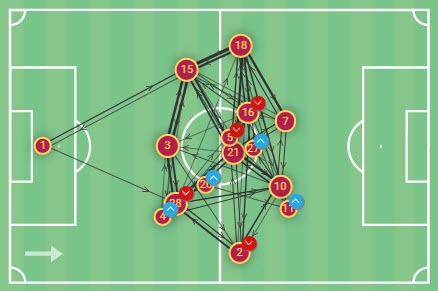 Immediately, we can see how indeed Alba and Dest were Barcelona’s only wide outlets. However, they also seem to have been acting more as ‘laterals’ or wide midfielders than ‘extremes’. Their positioning is somewhere between the two options, neither staying high enough to pin the backline nor deep enough to invite and drag the full-backs out of position.

This meant that Atlético Madrid could also maintain a balanced line that neither offered Barcelona enough space behind their backs nor too much space higher up. And then we have to consider the fact that these two teams have essentially mimicked each other’s shapes. In such scenarios, the team that can accomplish superiorities and/or has a qualitative advantage in certain positions comes out on top.

Barcelona could accomplish neither against Atlético Madrid on Saturday. Below is an image that shows us how the result of similar shapes are 1v1 duels across the pitch. The exception here is once again Griezmann, who’s isolated and overloaded down the middle, removing him as an option in most attacking sequences.

We have to analyse the qualitative superiority we mentioned as one of Barcelona’s ways to exploit the 1v1s duels. Since central progression was mostly blocked, the Catalans had to advance through the flanks, namely Alba and Dest. However, apart from Messi, no one on the team could successfully win offensive duels and dribbles to create an advantage in those scenarios.

We’ll finish this section of our tactical analysis by taking a look at Barcelona’s offensive duels on the night, especially focusing on the wide areas of the pitch. We can see that there is not enough success out wide with only Messi’s successful attempts alongside a couple of Dest’s visible here. On the right, we can see their positional attacks and we can conclude they preferred to attack down the left but couldn’t win many duels there, limiting their efforts immensely.

Diving deeper into the numbers, the data seems to support this thesis. The Catalans only managed to complete 12/21 dribbles on the night (57%) and most of that comes from Messi’s nine attempts (five successful). Dest attempted four (two successful) while Alba was on zero (zero). Usually, we would see De Jong attempt some as well but due to Busquets’ early substitution, the Dutchman had to assume a much deeper and defensive role.

This also limited the runs Barcelona had from the deeper areas and meant that they were lacking clear outlets. Unfortunately, this is also not an isolated incident either. The best way to shut this Barcelona team down is to force them wide and then ensure the 1v1s duels are won.

Denying them central progression and sitting deep with a five-man backline is the bane of Koeman’s system and Simeone exploited it perfectly. The introduction of Ousmane Dembélé later on gave them a new outlet and immediately lifted the tempo and the directness of their attacks. However, as ever, it was too little too late and the Frenchman didn’t help himself with some individual mistakes on the night.

Even though it were their defensive tactics that largely limited Barcelona to minimal threat, Atlético Madrid felt like the more likely team to score for the majority of the game. In the first half, Barcelona had three shots (three on target) to Atlético Madrid’s nine (six) and it was not until late in the second half that the Catalans woke up.

There were a couple of reasons for this ‘collapse’. We have to stress that the injury of Busquets played a huge role in turning the tides as it not only left Barcelona extremely vulnerable in defensive transitions but also lost them control of the game. But their inability to defend the half-spaces was a major weakness in their defensive tactics.

Let’s explore three examples of how Atlético Madrid’s exploited that throughout the game. 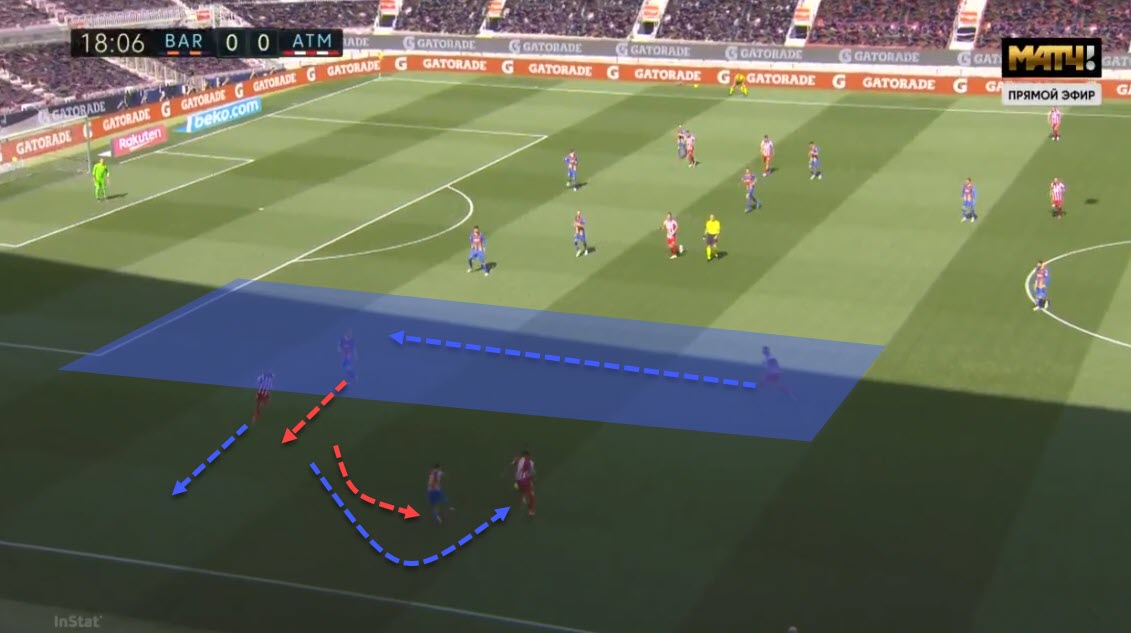 The common denominator in all of these sequences is movement manipulation and runs from the deep. Atlético Madrid were especially successful on their left side where the combinations between Saul and Carrasco worked wonders to dismantle Barcelona’s shaky defensive shape. Notice in the image above how an excellent rotation opens a channel towards the box and a great chance for the visitors.

De Jong is in the backline to compensate for Dest being dragged higher by an excellent curved movement from the opposition. But again, more manipulation forced the Dutchman wide and opened a channel for a run from the deep.

Similarly, opposite movements were used for the same effect. One player would drop deeper, dragging his marker with him, while the other would move higher, exploiting the newfound space behind the defence’s back. 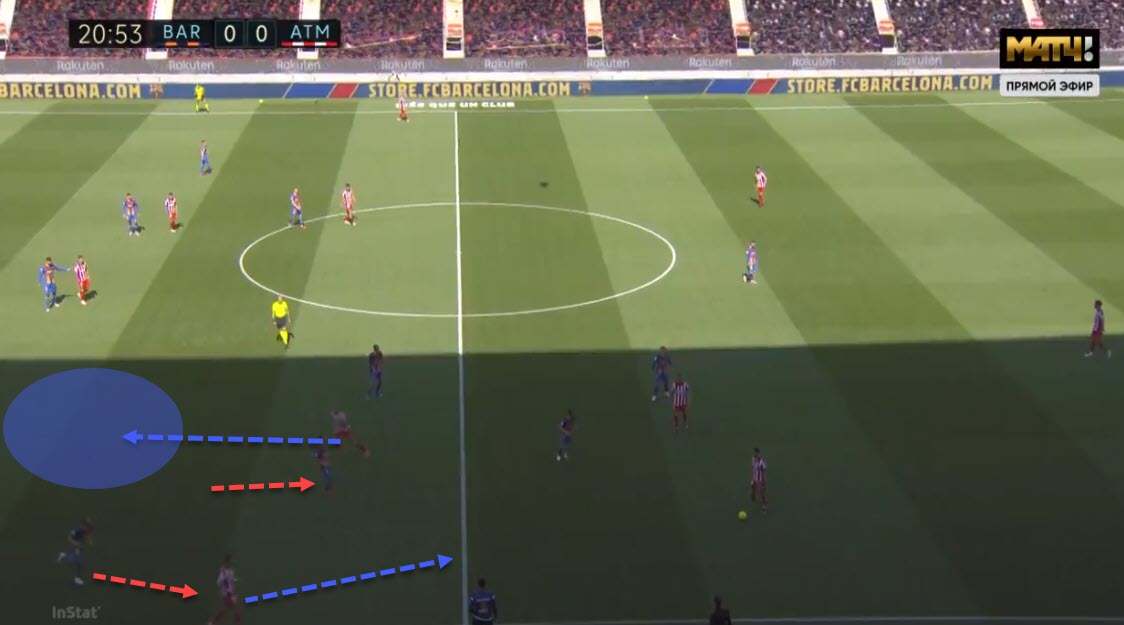 Finally, note the last example showing that same movement again. One player drops, drags the defender, and the other immediately makes a darting run into the pocket that’s created as a consequence of that movement manipulation. 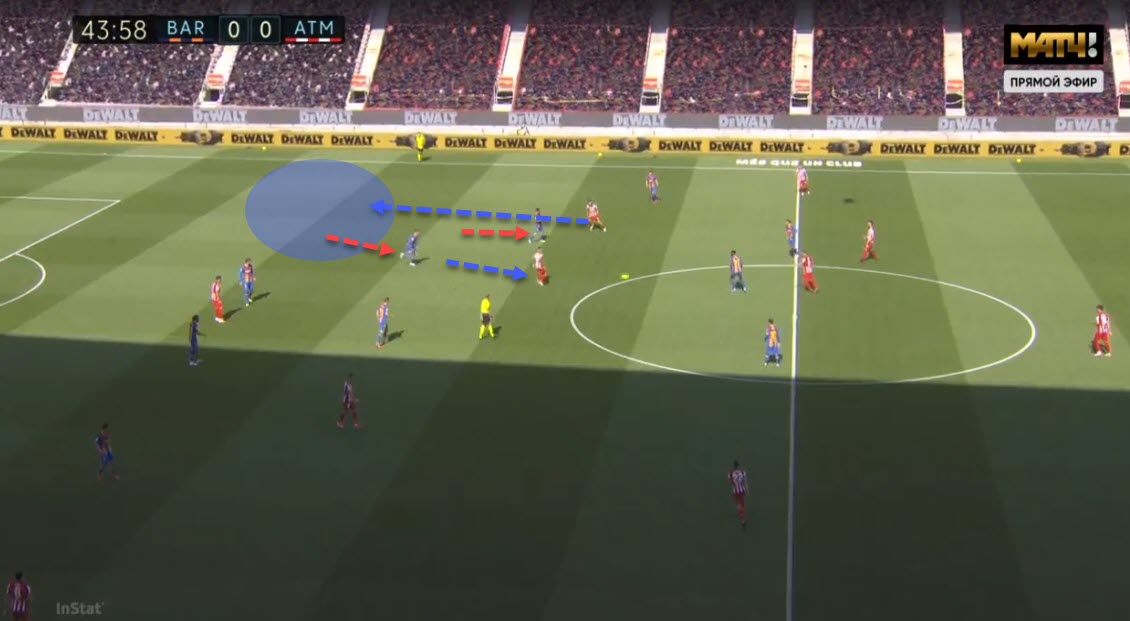 Unfortunately for Atlético Madrid, they couldn’t score their chances and some credit has to go to Ter Stegen for his saves as well. But for a big part of the game, they felt like the more likely team to take the lead and ultimately all three points.

There is more drama to be had in LaLiga, as it seems. This draw has once again complicated the situation in the table and it remains to be seen who can ultimately take advantage and claim the title. Can Atlético hold onto their slim lead or will Barcelona, Real Madrid or even Sevilla come out on top?

The race hasn’t been this exciting over in Spain for years. Let’s enjoy it while it lasts!