The Champions League semi-finals saw both Manchester City and Chelsea come through comfortably to make it an all-English final at the end of the month in the premier European club competition. This, in turn, raised the spotlight on the following weekend’s league game between these two sides, which was now being seen as a dress rehearsal for the final in three weeks. There were other subplots in play too – Manchester City could clinch the Premier League title with a win, while Chelsea would strengthen their chances of making the top four with a win of their own as well.

This tactical analysis piece will look at how both sides approached this match, and also explain what may seem to have been some odd tactics by Pep Guardiola in particular. 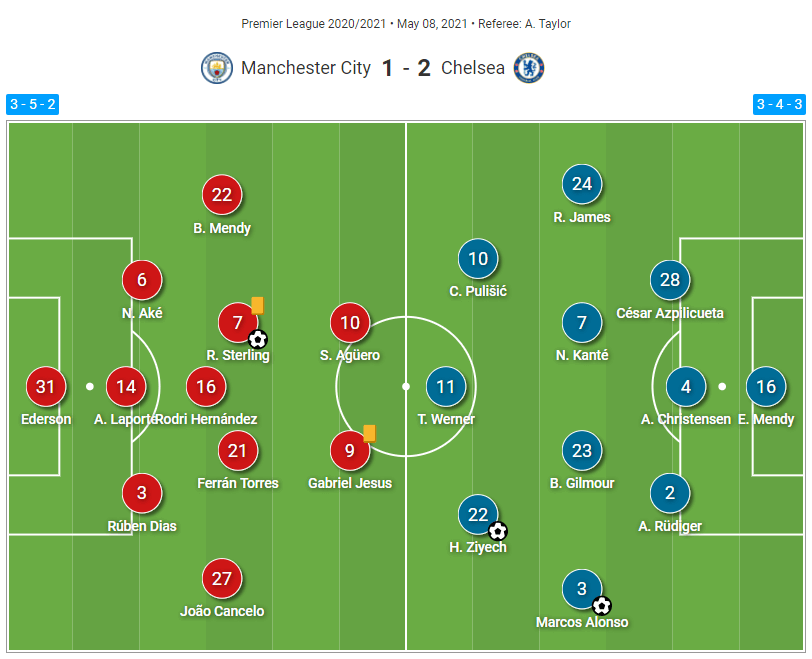 Guardiola made a whole host of changes from the side that defeated Paris Saint-Germain in midweek, with a change in formation as well, which effectively meant that this lineup was quite different to the one he is expected to put out in the Champions League final. City switched to a back three, with Aymeric Laporte and Nathan Ake coming in alongside Ruben Dias, while Benjamin Mendy and Joao Cancelo were the wing-backs. Rodri was the sole recognized midfielder in this XI, with Raheem Sterling, Ferran Torres, Gabriel Jesus and Sergio Aguero all coming into the side, leaving fans guessing as to what the shape of the team would be prior to kick-off.

There were no surprises of this sort from Thomas Tuchel – Chelsea lined up in their usual 3-4-3. The only personnel changes of note included Thiago Silva sitting out after his midweek exertions, while Billy Gilmour made his second consecutive league start in midfield alongside N’Golo Kante. Christian Pulisic and Hakim Ziyech flanked Timo Werner.

The City lineup prompted a lot of discussion online as well as in the TV studios as to what the team’s shape would be. It is odd to see a Pep Guardiola side with just one central midfielder, given his penchant for control of possession. However, it was evident once the match kicked off that he was simply using Sterling and Torres as ‘free eights’, so this was more a case of using players in unfamiliar roles, rather than creating a new system. 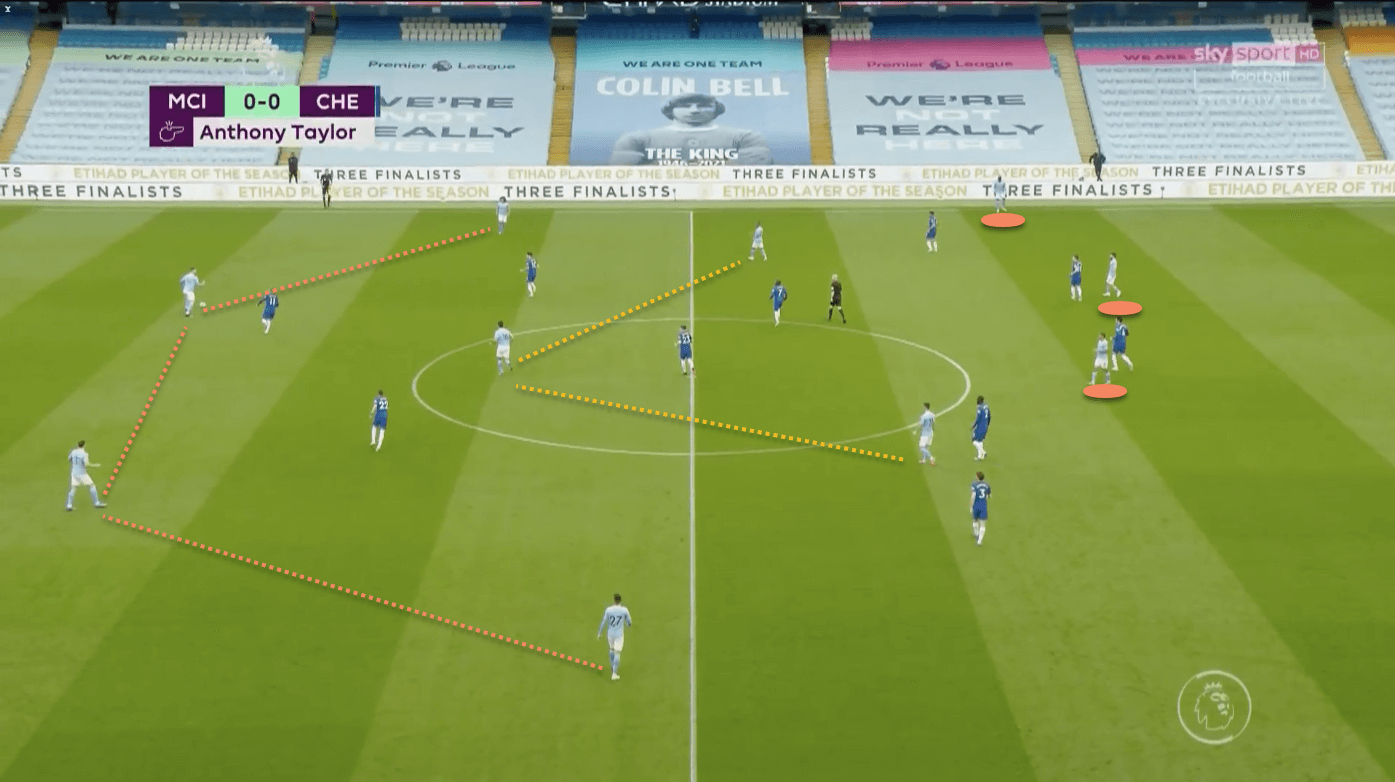 City’s shape, on paper, was a 3-5-2. However, as we can see in the above image, this was usually a 4-3-3 of sorts when City had possession. Ake, Laporte, Dias and Cancelo formed a back four, with Mendy pushed high up the field, almost akin to an old-fashioned left winger. Rodri had Sterling and Torres playing as advanced midfielders on either side, while Jesus and Aguero formed a narrow front two to occupy at least two of the three Chelsea centre-backs. Note how close Antonio Rudiger is to Ferran Torres – this would become an important tactical theme in this match, especially in the first half.

This had obvious implications in City’s build-up, and it was clear from the opening minutes that Guardiola’s plan was to try and isolate Kante so that he had too much space to cover. The Frenchman had been impressive in recent weeks for the away side, and Guardiola correctly recognized that he would need to neutralize his ball-winning abilities if City were to progress the ball up the field. 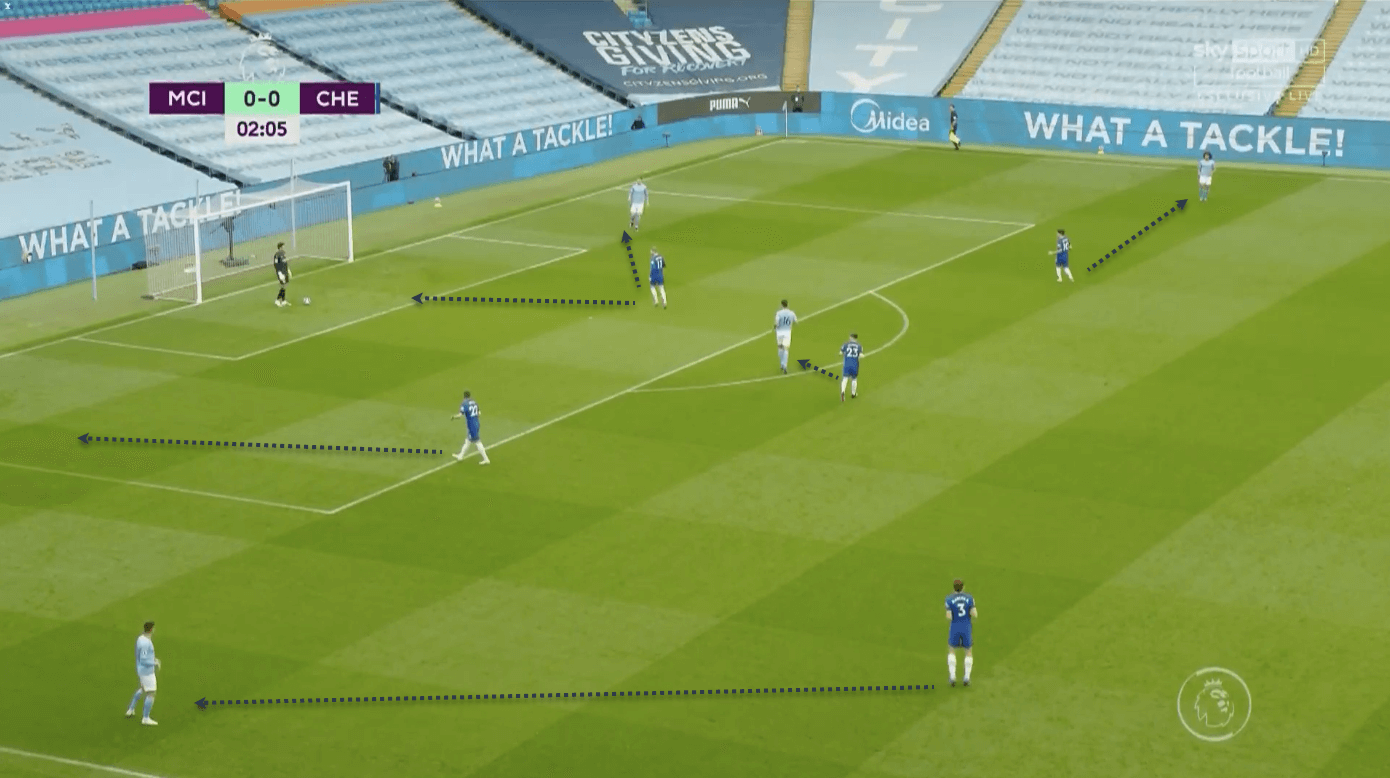 We can see City’s build-up shape here, as well as Chelsea’s pressing approach. Their front three of Werner, Pulisic and Ziyech marked the three City centre-backs, while Gilmour pushed high up the field to pick up Rodri. With the two Chelsea wing-backs also occupied by their City counterparts, this left Kante isolated in midfield, and City took full advantage of this by having either Sterling or Torres drop deep to pick up possession. 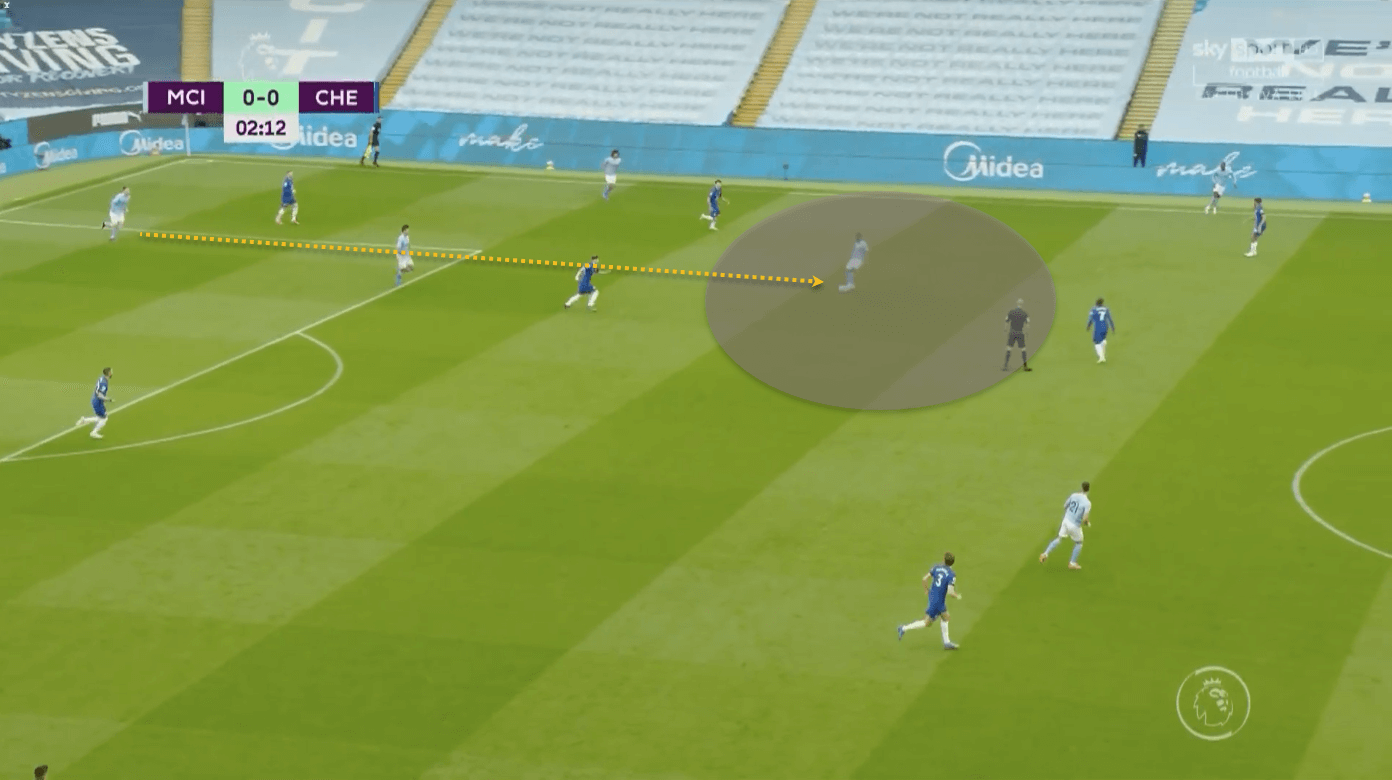 We can see just how much space Sterling has to receive the ball here – he is able to receive possession from Laporte, turn, and drive into space – precisely the sort of situation that Guardiola was hoping to engineer through this tactical change.

City also varied this approach – Jesus would sometimes drop into the midfield space as well, which created another dilemma for Kante and allowed the home side to progress the ball easily again. 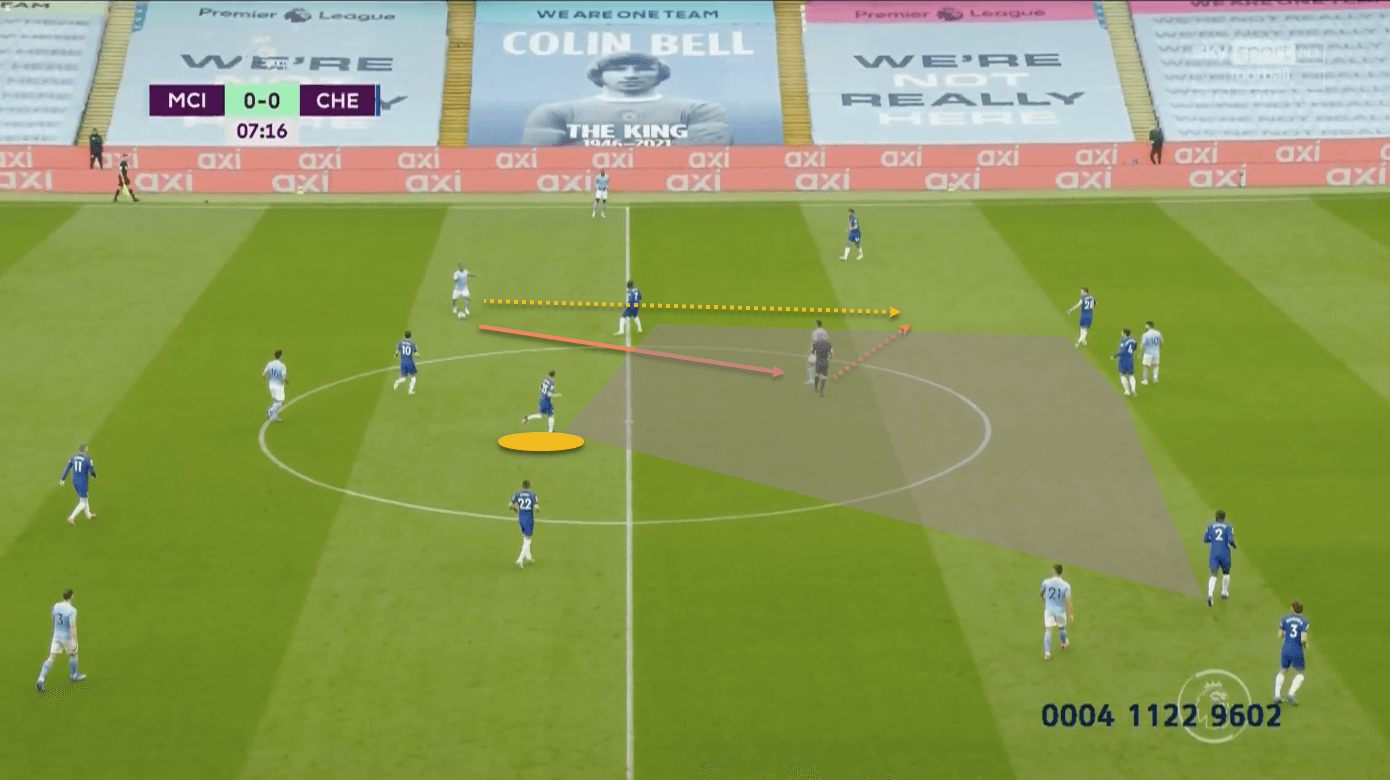 Jesus picks up a position between the lines here – Sterling can play a simple pass to him and make a run into space for Jesus to find him with the return ball, while we can also see Azpilicueta gesturing to Gilmour to pick up the Brazilian.

Torres was doing the same on the opposite side, so Thomas Tuchel made a quick alteration – Rudiger was now told to follow the Spaniard into midfield to try and remove City’s overload in those situations. We can see this play out in the next image – 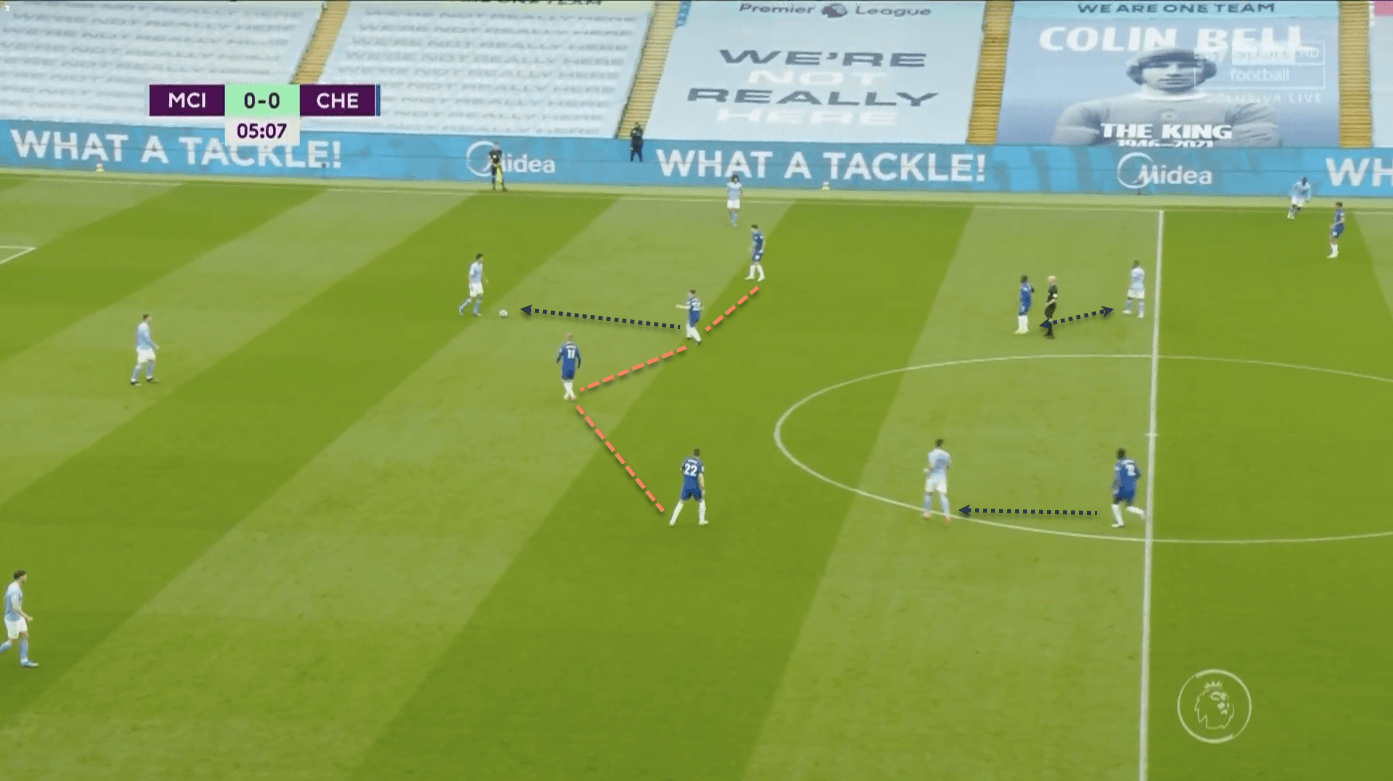 Gilmour continues to press Rodri, with Kante picking up Sterling and Rudiger in charge of Torres.

However, this approach had already led to a chance for City. Rudiger stepping up meant that there was a lot of space behind him if a run could be made in that area, and Torres created an early chance in this manner. 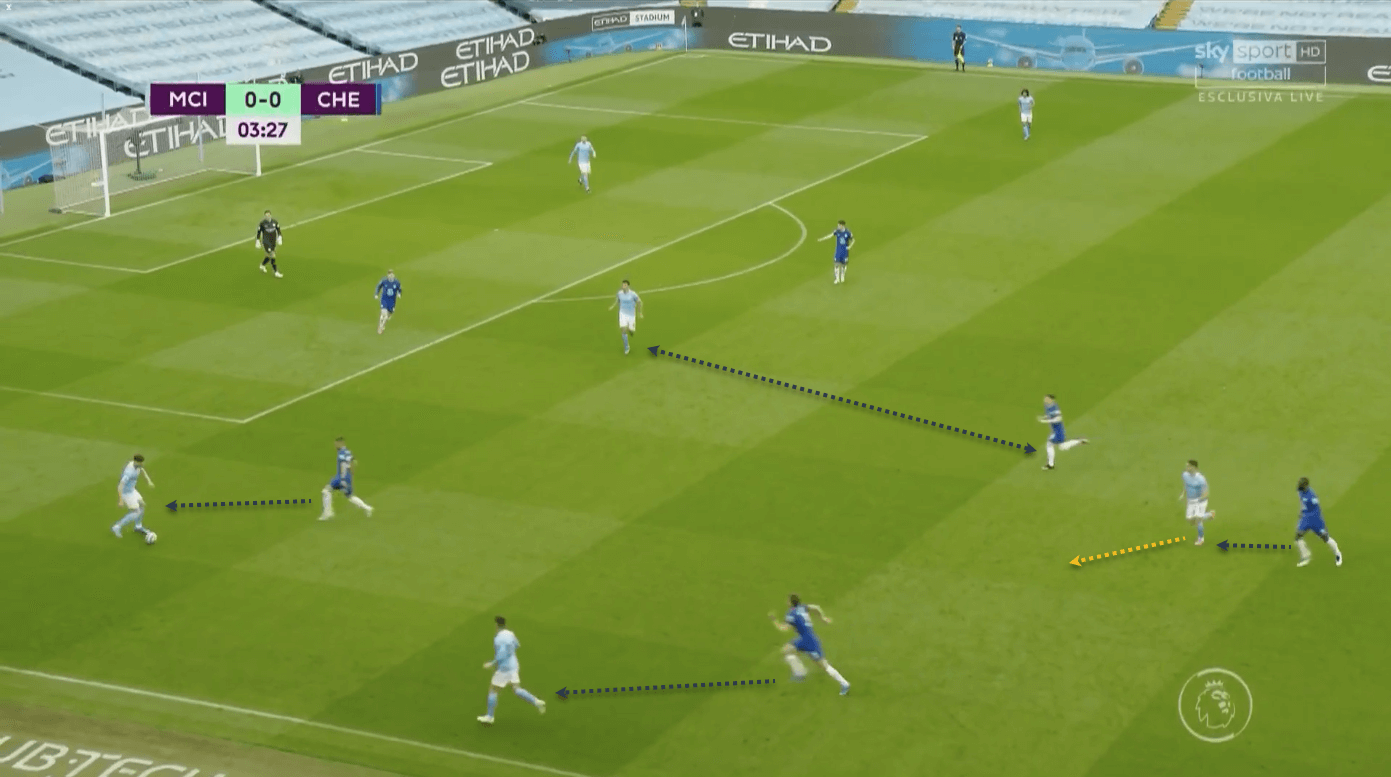 This image shows Chelsea’s shape in build-up, with Rudiger stepping up to mark Torres. 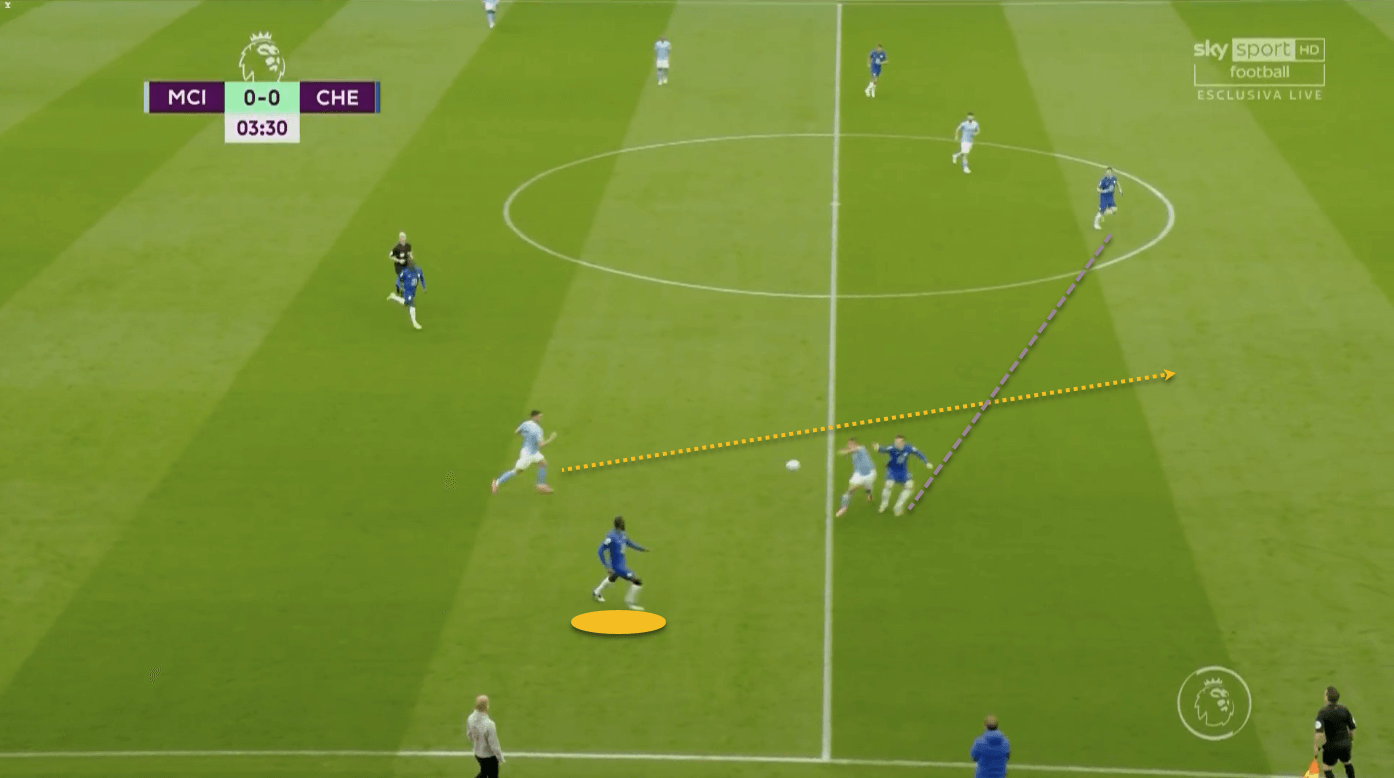 However, this opened space up behind the German centre-back, so when Dias played a long ball over his head to Jesus, who was dropping into that space, Andreas Christensen is forced to come out to cover, and this then creates space for Torres to run into. 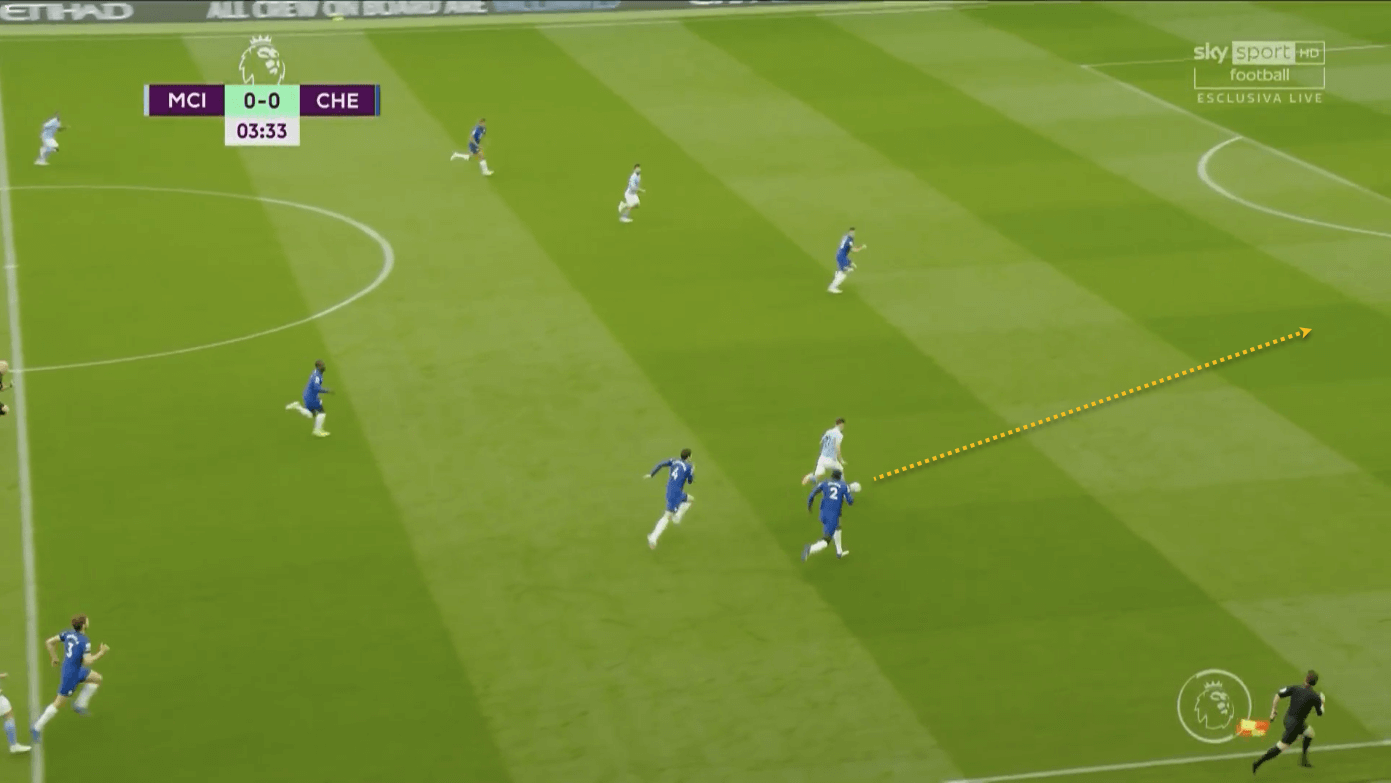 Torres eventually shot wide with the recovering Rudiger able to apply enough pressure to put him off, but this theme would be repeated later in the half for City’s goal as well. 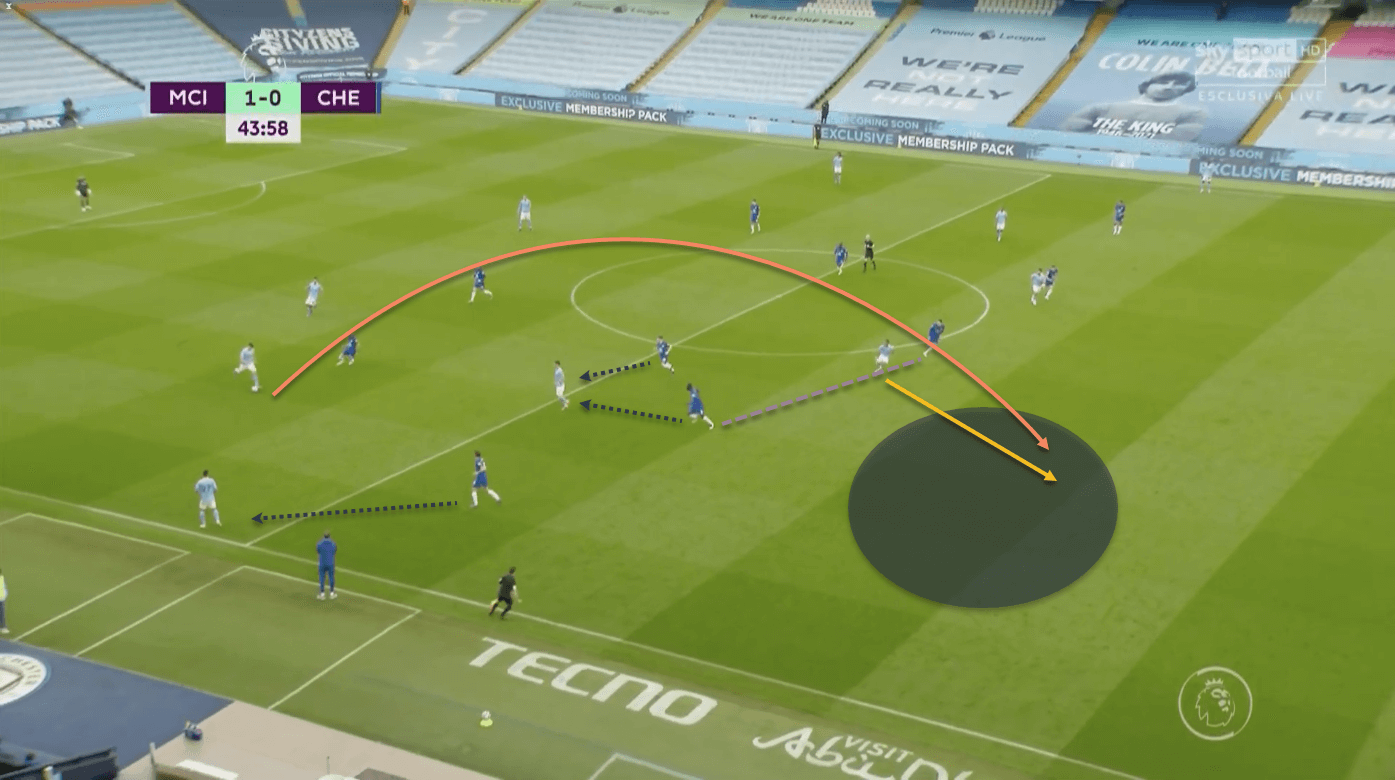 Again, we can see here that Rudiger is drawn to Torres between the lines, with Gilmour also late in picking up the Spaniard. With Alonso concentrating on Cancelo, space is created for Jesus to run onto Dias’ pass in behind, and this eventually leads to Sterling’s goal.

City should have gone into half-time 2-0 up, but Aguero’s missed penalty would come back to haunt them, as Tuchel made a couple of tweaks to ensure that the home side would not be able to play over his midfield so easily.

One immediate change by the Chelsea manager was to instruct Gilmour to stay deep and in the same line as Kante during City’s build-up phase. This meant that Rodri was left unattended at times, while at other times Timo Werner would drop onto him. However, crucially, it ensured that Kante was not left outnumbered in that zone, and City were unable to create too many chances from that sort of situation in the second half. 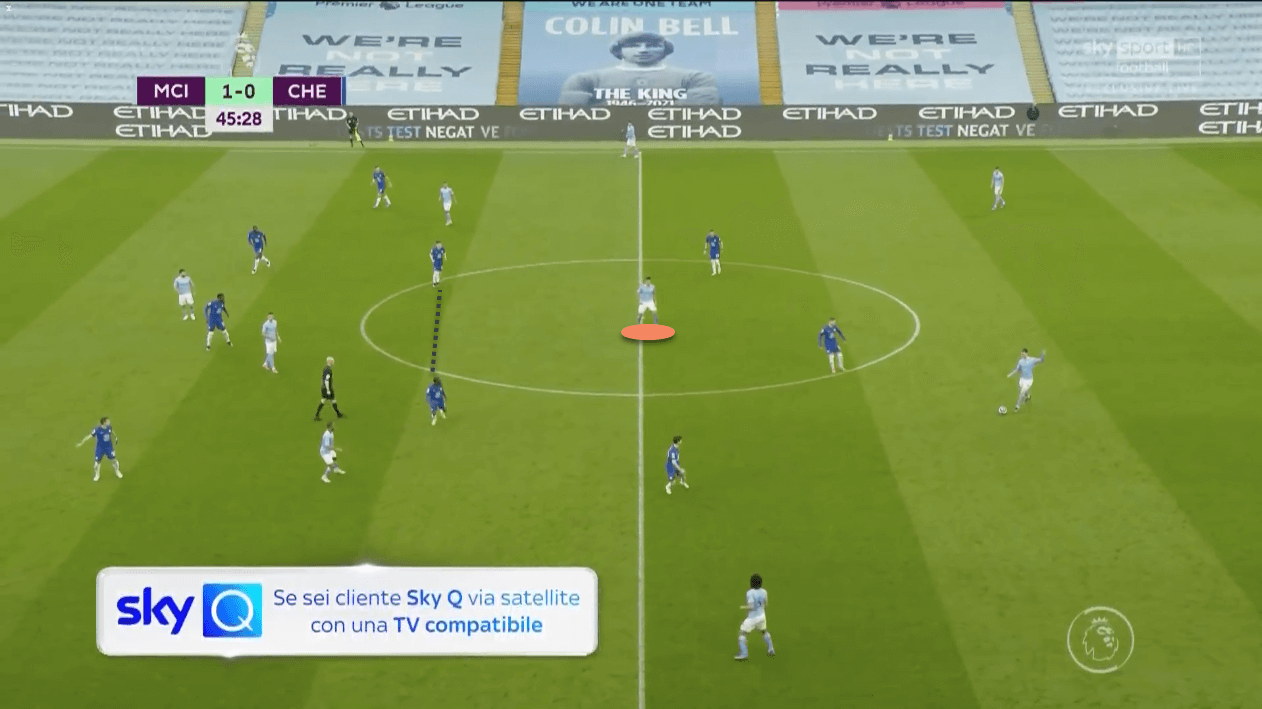 Chelsea also exploited City’s left flank in a big manner in the second period. Reece James was constantly able to beat Mendy in 1v1 duels and then had the space to run deep into the City half, and this helped create a number of chances for the away side. 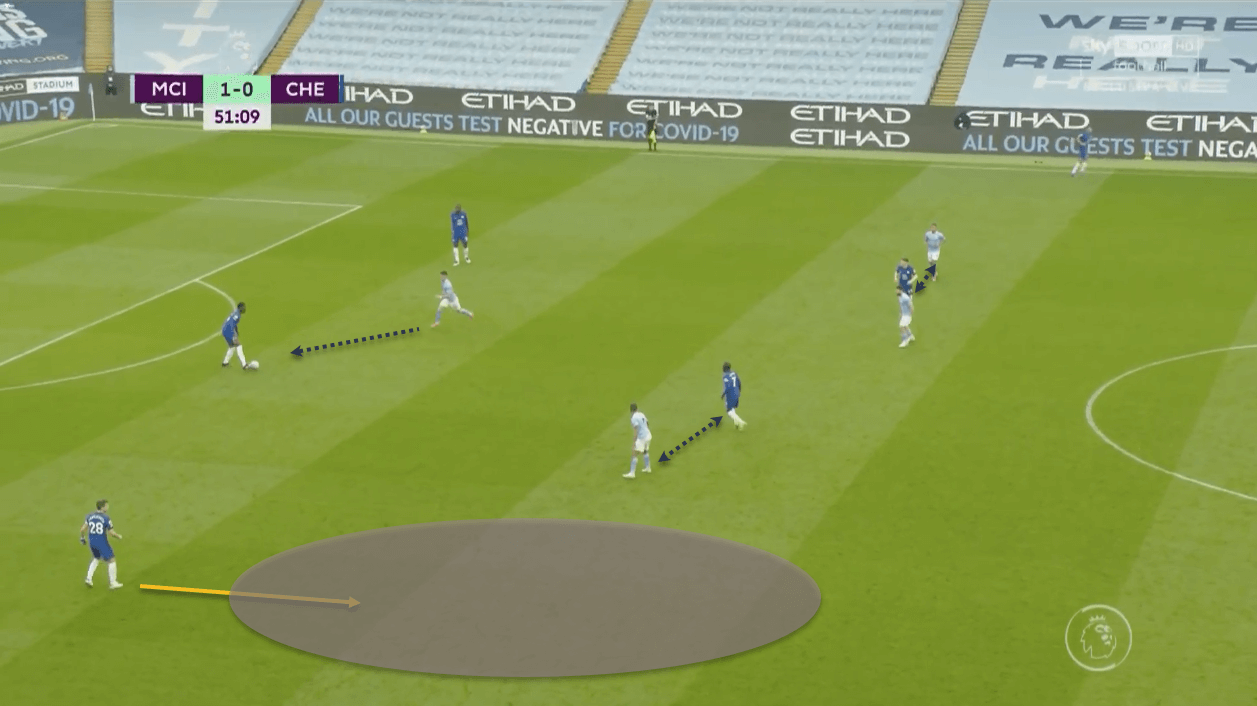 Aguero would drop into the second line of City’s press, with Torres the sole player to press the Chelsea centre-backs. Aguero, Sterling and Jesus would stay quite narrow to try and cut out passes into Kante and Gilmour, but this meant that Chelsea’s outside centre-backs – Cesar Azpilicueta and Rudiger, had space to advance, with the away side using Azpilicueta on multiple occasions in this manner. 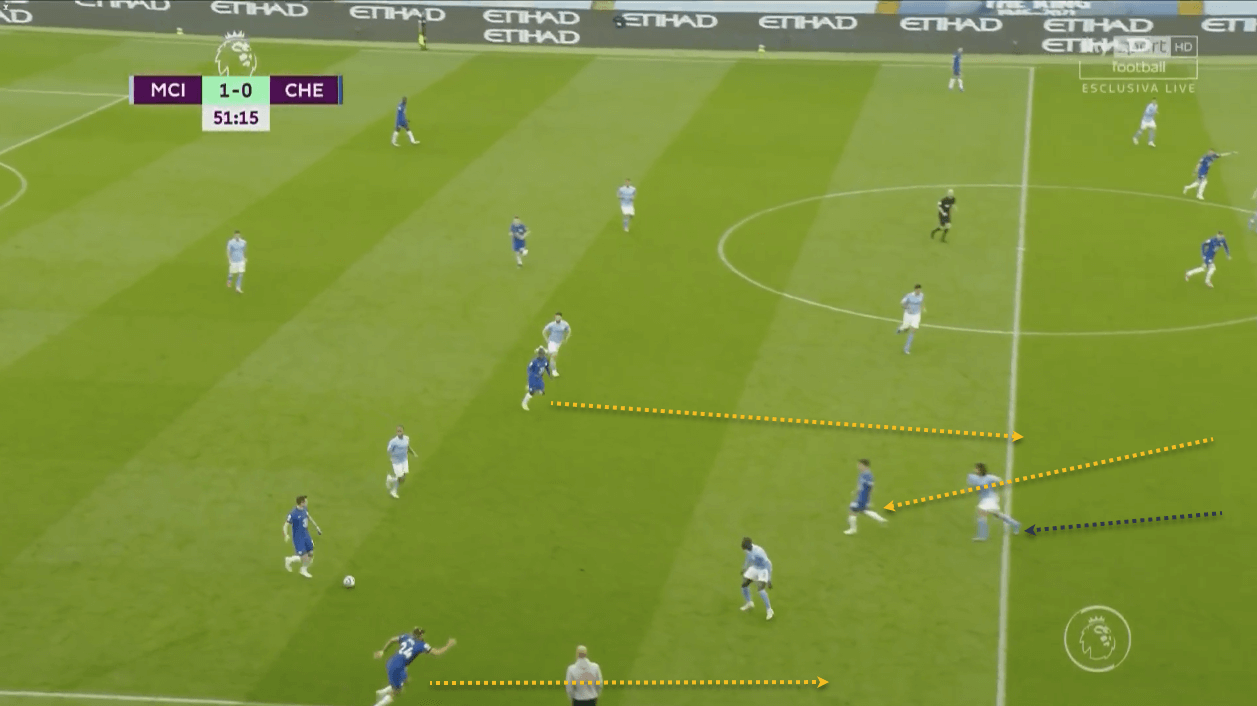 Christian Pulisic’s movement was also crucial here. The American was dropping deep from his forward position, which dragged Ake out to cover him, and thus created space for Kante and James to run into down their right flank. Chelsea tried this move on several occasions, and James’ physicality meant that he was often able to get away from Mendy. Here, we can see how Pulisic’s movement has created the space for Kante to run into, while James is also able to get past Mendy. 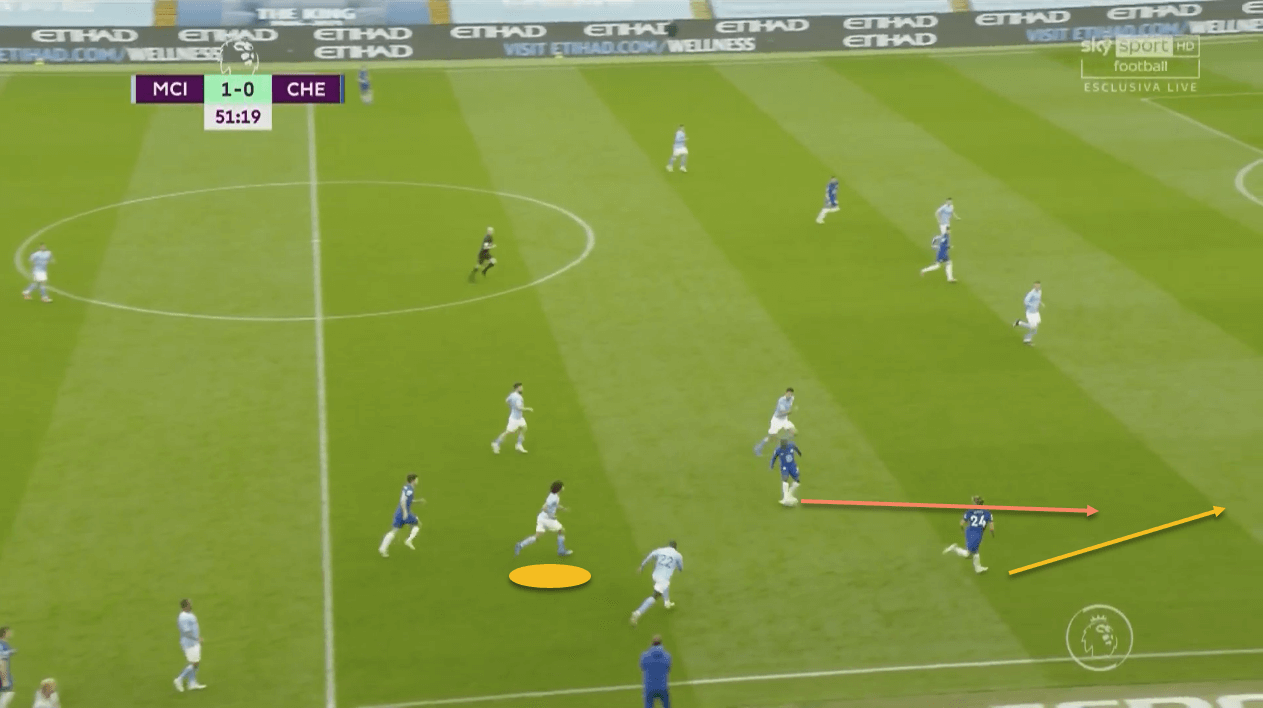 Kante plays a first-time pass to James who then motors forward and eventually passes infield for Hakim Ziyech to take a shot.

This exact move was repeated a few minutes later as well – 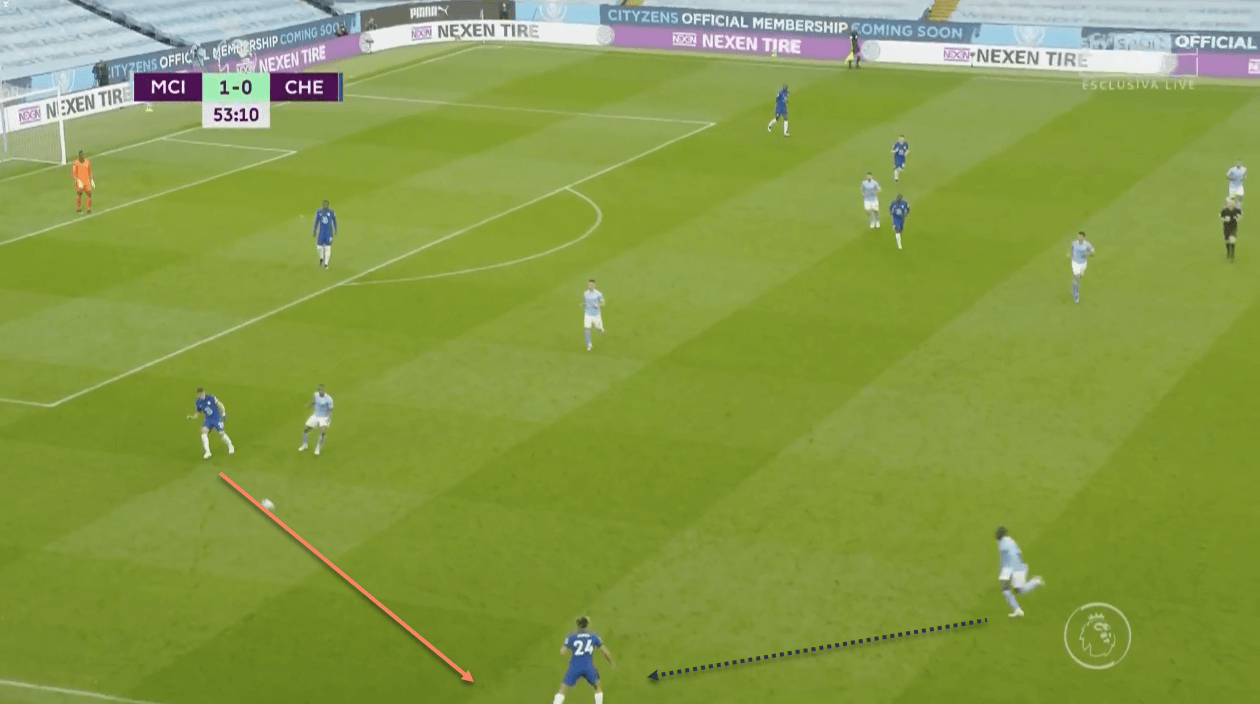 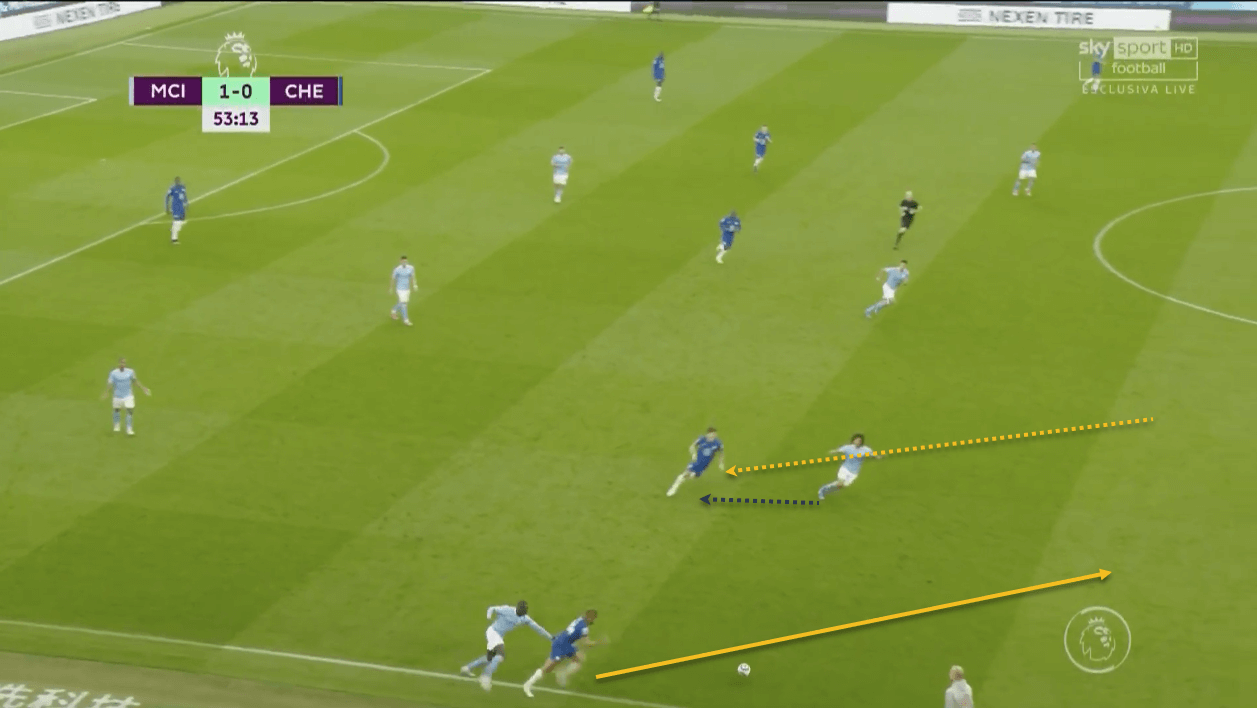 Chelsea were thus able to exploit City’s left flank by using a similar movement to that being used by City themselves in the first half – forward players dropping deep to drag a centre-back out of position.

This was an extremely intriguing tactical battle between perhaps two of the best tactical coaches out there. Guardiola’s lineup seemed more like an attempt to keep his approach for the Champions League final close to his chest, but it was also an experiment to try and see if he could leave Kante isolated and exploit the space around him. Tuchel, on the other hand, will have been pleased by his side’s resurgence in the second half, and especially James’ dominance over Mendy on the right. It is unlikely that City will use this approach in the Champions League final, but Guardiola may use certain aspects of his side’s tactics here in that marquee encounter, which promises to be another fascinating match between these two expert tacticians.