The second leg of the UEFA Europa League semifinals will be played on Thursday night. The first leg matches did not disappoint, as we were treated to two hugely entertaining ties. Manchester United fans had a night to remember as the Red Devils thrashed AS Roma 6-2 at home to virtually book their place in the final. However, Arsenal are far from comfortable, as they lost 2-1 away to Villarreal, with only the away goal providing them with some hope ahead of the second leg at the Emirates Stadium.

This analysis will try and predict the potential lineups for each side, and also have a short tactical analysis on the Arsenal-Villarreal game, as the result of that tie is still in the balance, as opposed to the other semi-final.

Unai Emery managed to win against his former team at home, but Arsenal managed to nab an away goal through Nicolas Pepe’s penalty, which gives them a solid chance of overturning the first leg result. Both sides won their matches in their respective leagues over the weekend, and this should make for a fascinating encounter at the Emirates. 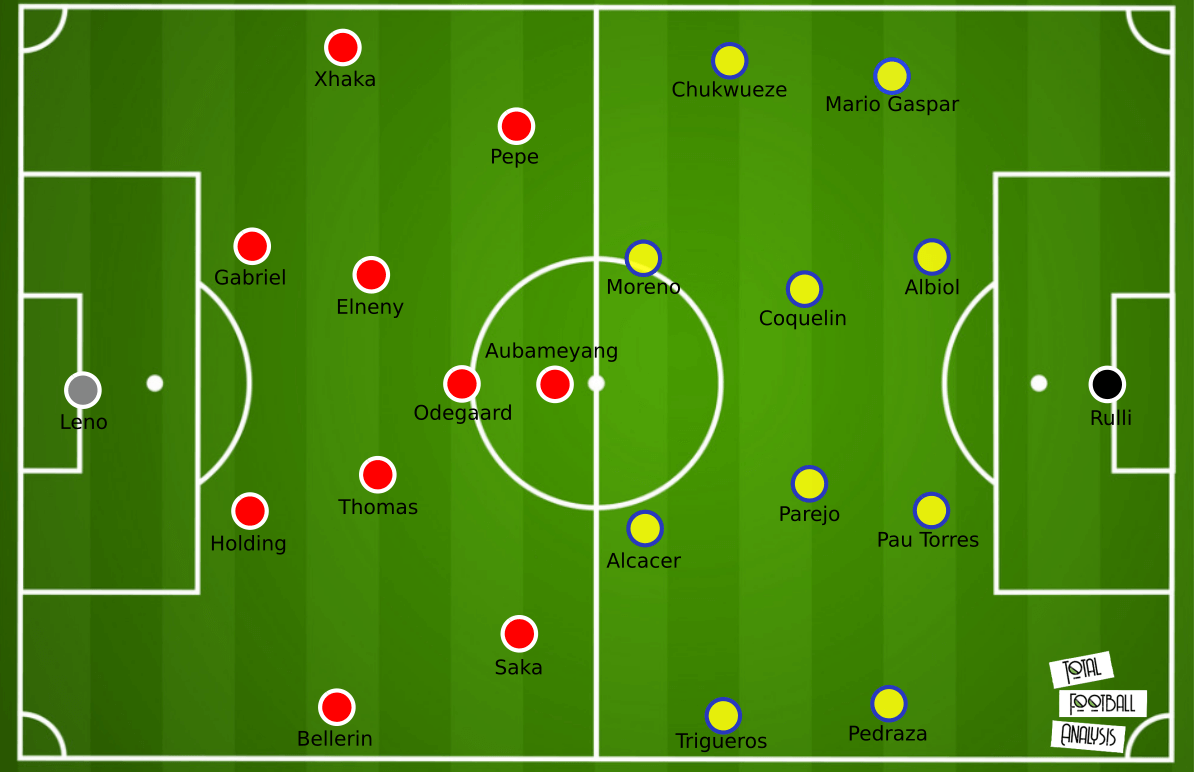 The biggest boost for Arsenal is that their captain Pierre-Emerick Aubameyang will be fit to start, having recovered from a bout of malaria. Aubameyang started at the weekend against Newcastle United, amid a heavily-rotated side from Mikel Arteta, and scored a good volleyed goal, which should be a boost to his confidence as well.

We predict that Arsenal will line up in a 4-2-3-1 formation, with Bernd Leno returning to goalkeeping duties, after Mathew Ryan came into the side for the weekend’s game. David Luiz went off with an injury in that match, which Arteta later confirmed as ‘not good news’, so Rob Holding and Gabriel should resume their partnership at centre-back from the first leg.

Granit Xhaka will continue to deputise for Kieran Tierney at left-back, while we expect Hector Bellerin to start over Calum Chambers on the opposite side. Dani Ceballos was sent off in the first leg, so Mohamed Elneny, who also scored at the weekend, should come into the midfield pivot alongside Thomas Partey, with Martin Ødegaard as the number 10 ahead of them. Alexandre Lacazette’s injury absence will mean that Aubameyang should play as the central striker, with Bukayo Saka and Pepe on the flanks – Arteta will surely not repeat his experiment from the first leg where Emile Smith Rowe was unsuccessfully used as a false nine.

Villarreal are expected to continue in their preferred 4-4-2 shape, which is often akin to a 4-3-3, as we saw in the first leg, with Manu Trigueros moving infield from the flank and Gerard Moreno playing a little wider. Geronimo Rulli will continue in goal, while there will be a change at right-back, where Juan Foyth picked up an injury in the first leg, so Mario Gaspar will come in as his replacement. Alfonso Pedraza will play at left-back, with the regular centre-back duo of Raul Albiol and Pau Torres available as well.

The Yellow Submarines also saw a sending off in the first leg – Etienne Capoue received his marching orders for a challenge on Saka, and so former Arsenal man Francis Coquelin will come into the XI to replace him, alongside Dani Parejo. Trigueros and Samuel Chukwueze will be the wide players, while Paco Alcacer and Moreno will form the strike duo. Like Arteta, Emery also rested some key players at the weekend, and so both teams should come into this match well-rested and in good condition. 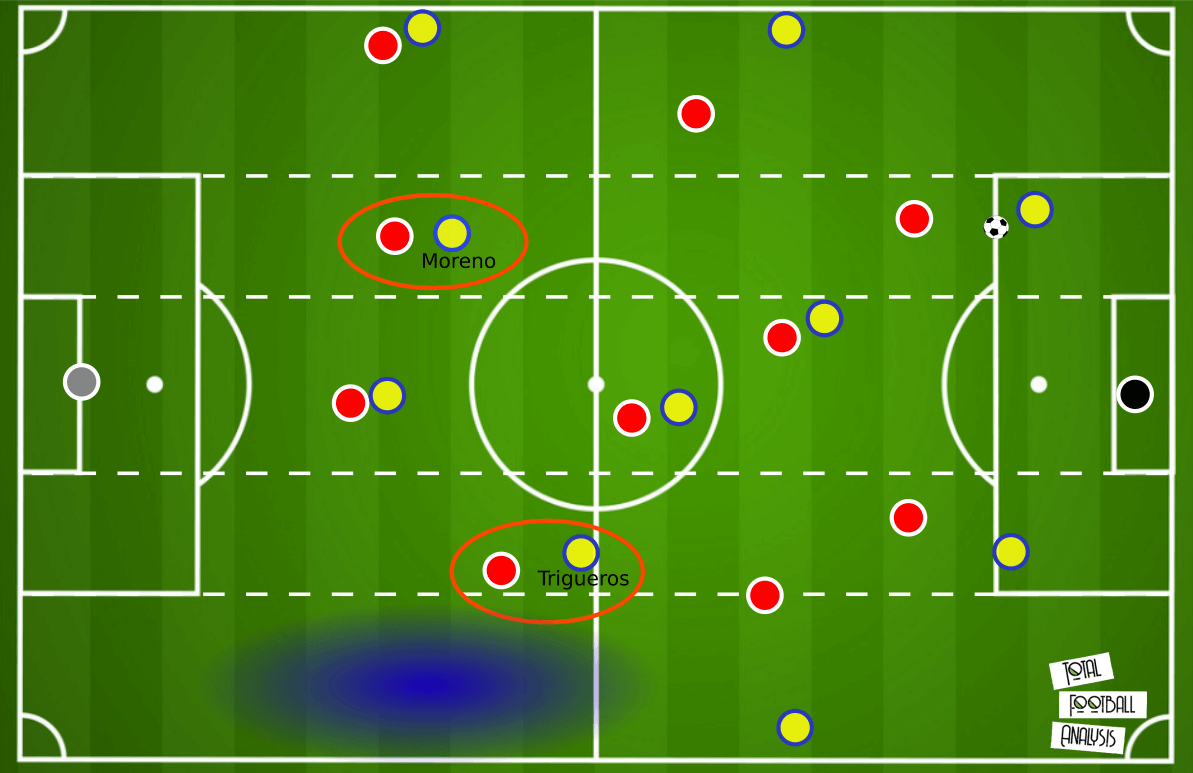 This image shows how Villarreal can hurt Arsenal by drawing them into a high press. We saw how Arsenal engaged Villarreal high up the pitch in the first leg, but this was bypassed on occasion by the home side, and actually led to a goal as well. The key here will be Trigueros and Moreno’s occupation of the half-spaces. We can expect Moreno to drop deep to receive the ball when it is on the right flank, which could draw a centre-back out towards him and create space for Chukwueze to run into from his wide berth. The Nigerian will have a significant pace advantage over Xhaka, and so we expect Villarreal to try and isolate him 1v1 against the makeshift left-back as much as possible.

On the other side, Trigueros will tuck in to become the third central midfielder, and this could open up room for Pedraza on the overlap (blue shaded area). The away side could try and create a 2v1 numerical advantage in this area against Bellerin, who can sometimes be exposed by quick passing and movement around him. 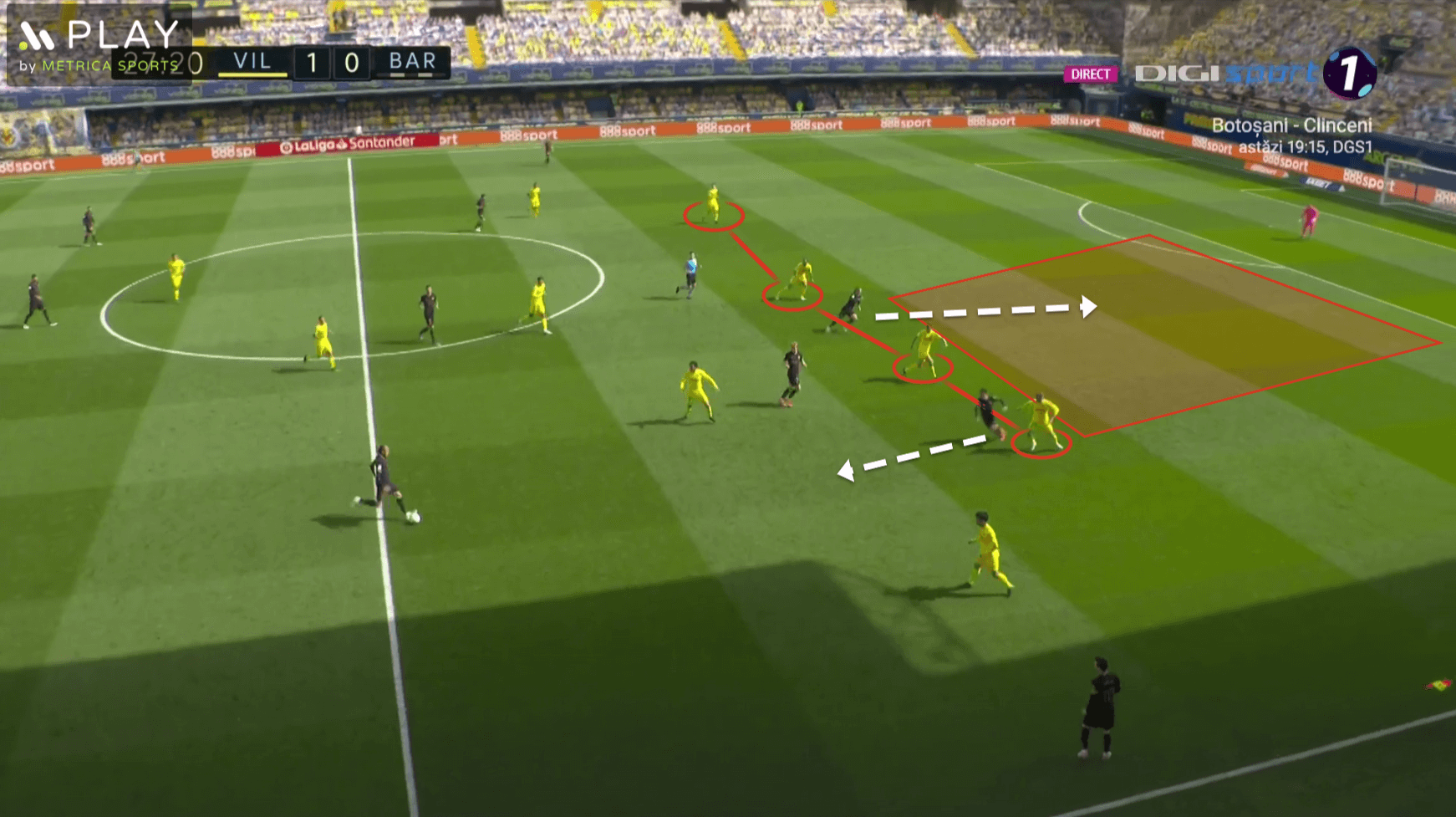 Aubameyang’s return will mean that Arsenal’s central striker will try and run in behind the defence as much as possible. This could be a huge advantage against Villarreal, who have been caught out by this sort of movement several times this season. The above image is an example from the match against Barcelona, where the Villarreal defence was positioned high, which allowed Griezmann to run in behind. We can also see how his teammate is coming short to pull the Villarreal left-back out and further increase the space for Griezmann – Saka could do the same, while a player like Ødegaard is quite capable of finding Aubameyang with these sort of passes.

Manchester United’s 7-1 win over Roma in the second leg of the 2005/06 Champions League quarter-finals is one of the most memorable games in their history, certainly in Europe, and United managed to deliver another result of a similar magnitude in the first leg last week. The Red Devils should rest a number of their key players for this match against a demoralised Roma side who lost to Sampdoria at the weekend to continue their recent run of bad form. 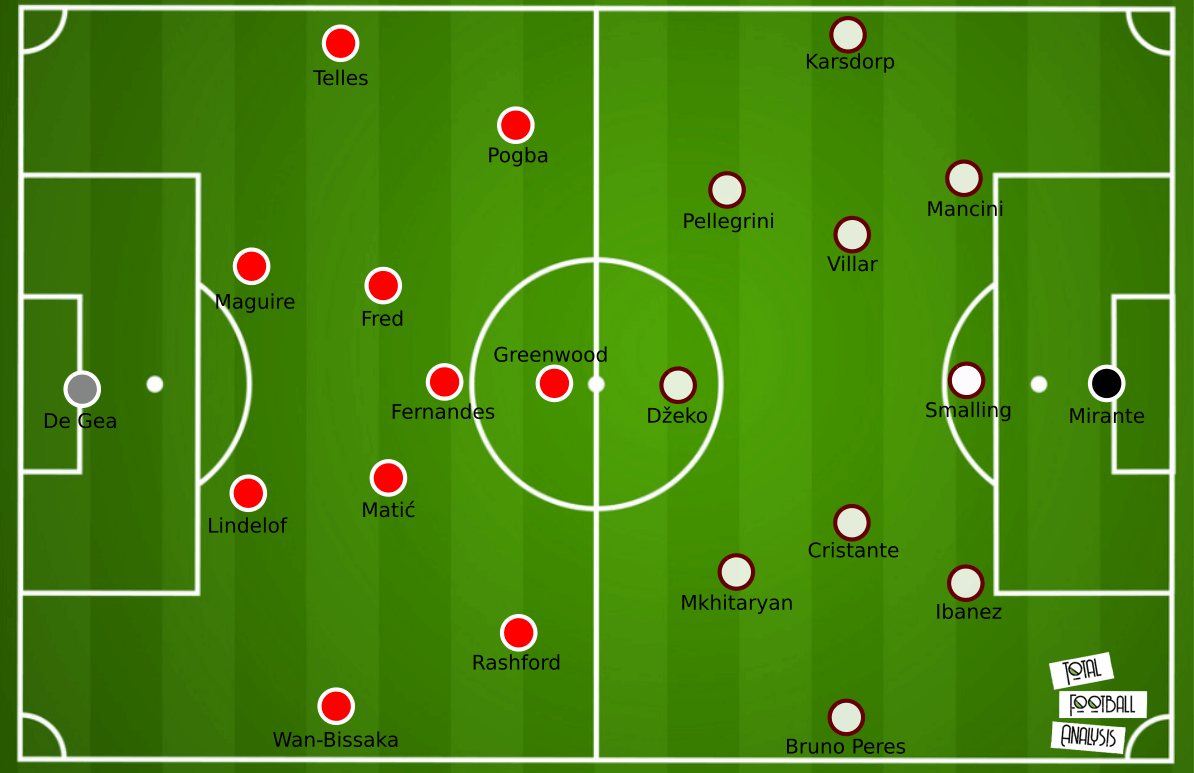 Paulo Fonseca will have a tough time putting out a decent starting XI given the injuries they have suffered lately. The Giallorossi lost Pau Lopez, Leonardo Spinazzola and Jordan Veretout to injury in the first half itself at Old Trafford, which was definitely a contributing factor in their poor performance on the night. Riccardo Calafiori, Marash Kumbulla, Pedro, Nicolo Zaniolo and Stephen El Shaarawy are all also unavailable, which lays bare the problems at the Stadio Olimpico at the moment. We expect them to line up in their usual 3-4-2-1 formation, with Antonio Mirante replacing Lopez in goal, while the centre-back trio should be Roger Ibanez, Gianluca Mancini and Chris Smalling. Rick Karsdorp and Bruno Peres will be the wing-backs – Peres is a right-back, but Spinazzola and Calafiori’s injuries mean that he will be needed on the left side. Gonzalo Villar will play in central midfield alongside Bryan Cristante, who will move forward from the centre-back position he occupied in the first leg.

It is difficult to lay out Manchester United’s expected lineup and tactics here, but we do expect a lot of rotation from Ole Gunnar Solskjaer. Roma are only playing for pride in this match, and fans can be forgiven for looking forward to next season already, since Fonseca’s departure has been announced, as well as the identity of his successor – Jose Mourinho.

Manchester United should, barring a stunning collapse, make it into the final of this season’s Europa League. The result of the other semi-final is still up in the air – Arsenal will fancy their chances at home, but Villarreal are a very capable side, as they showed in the first half, and this should be a close encounter with both sides capable of joining United in Gdansk on 26th May.