On Thursday night, Copa Libertadores saw a clash between the Argentinian Racing Club de Avellaneda and the Brazilian Sao Paulo sides, both former champions of the tournament. The two South American giants topped Group E with four and six points respectively and the clash was expected to be one of the defining moments in the tournament for both sides.

Sao Paulo, coached by former Chelsea star Hernán Crespo, hadn’t won a match in Argentina in Copa Libertadores since 2005, while the home side was facing pressure after a bad run that has left their coach, Juan Antonio Pizzi, in a bad position and under pressure to resign from his role.

The match was a vibrant and intense one as expected and the 0-0 draw left us many interesting aspects from both sides’ tactics. In this tactical analysis, we’ll have a look at the key points of the match. 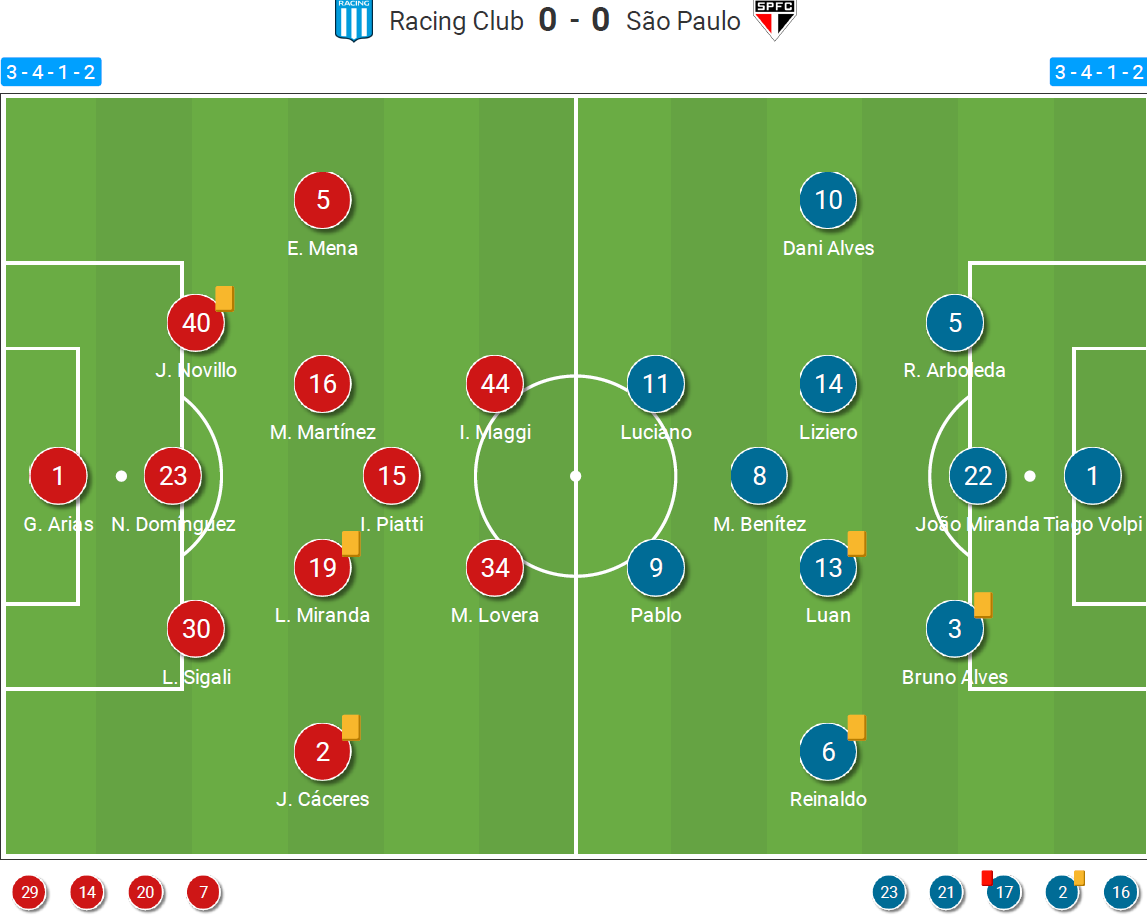 Both teams lined up in a 3-4-1-2 formation. The home side had in the ex-MLS star Ignacio Piatti their most internationally recognized player, with Maxi Lovera, on loan from Olympiacos, being another standout player for the Argentinian side.

Racing’s attacks: mobility and using spaces on the wings

Racing dominated the game well and put into practice their match plan efficiently. Their high and intense press prevented Sao Paulo from progressing from the back and also allowed them to recover the ball high up the pitch to start their attacks from advantageous positions very often.

Racing were very practical in the buildup for most of the game. Their first idea was to play short and build with their back-three but Sao Paulo pressed high and after a couple of mistakes, Racing changed their approach to playing long balls and trying to win the second ball or press Sao Paulo in their own half.

Sao Paulo pressed very well in goal kicks, forcing Nery Domínguez, Racing’s middle centre-back, to drive the ball forward between them or risk the ball with diagonal passes. In the example below, we can see this setup and one of the few mistakes Racing made in the match. 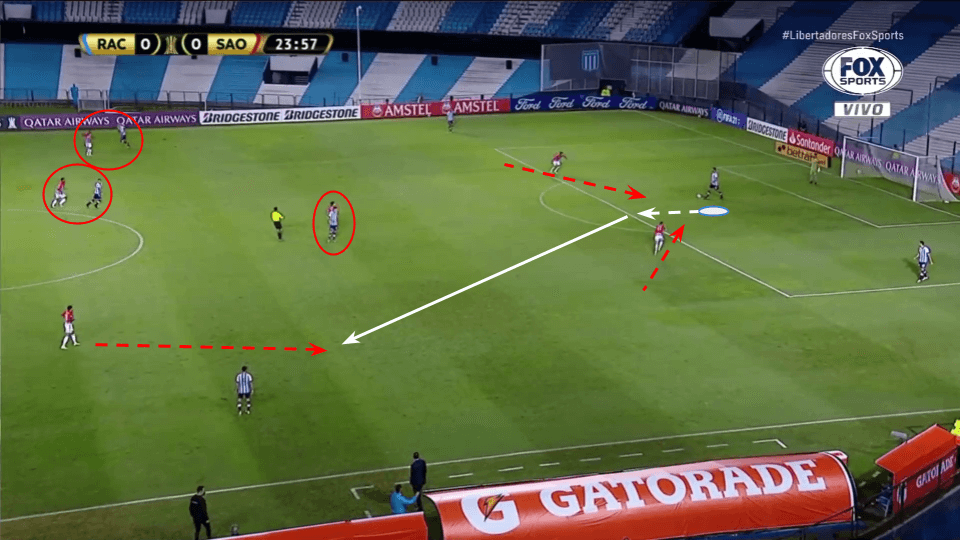 Racing didn’t fall into the trap of risking the ball and trying to play from the back too many times and instead preferred to play long balls and fight for the second ball. This was one of the main differences in the game as Sao Paulo preferred to play short passes and Racing could recover the ball higher up the pitch and establish themselves in the opposition half this way.

The times when the Brazilians’ pressing didn’t work well, Racing looked to find Maxi Lovera between the lines. Lovera, who was one of the two strikers on paper, played in a free role and was key to Racing’s progression, moving very well behind Sao Paulo’s midfield and finding lots of space to create a numerical advantage in midfield as none of the centre-backs followed him when he dropped deep. Once he received the ball, Lovera was quick to turn and attack, accelerating the attacks with his dribbles and passes and even attempting a couple of shots from distance.

In the following picture, we can see Lovera’s movements to receive between the lines. Sao Paulo’s midfielders are man-marking Racing’s and the centre-back doesn’t follow the Argentinian forward so he has plenty of space to receive, turn and play forward. 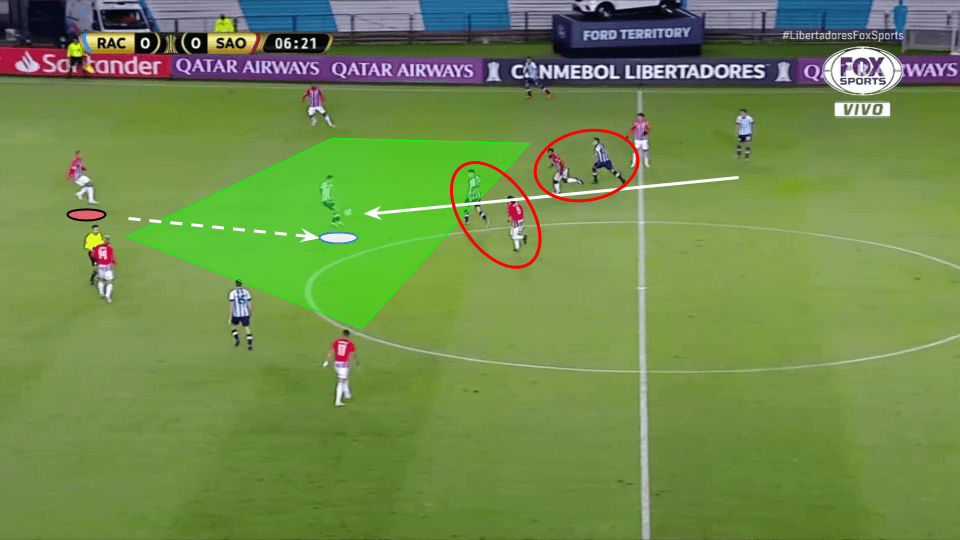 When the attacks naturally reach the opposition half, Racing again looked to activate Lovera so he accelerated the play through central areas or play wide and then cross. Sao Paulo centre-backs struggled to follow him in most phases of the game and he managed to create numerical advantage and receive the ball free from any mark several times.

Below we can see another example of Lovera receiving free and with space to turn and attack. When he dropped deep, Lovera often found spaces to advance almost to the edge of the box and if a rival stepped out to challenge him, he had space to use his dribbling skills and advance anyway. 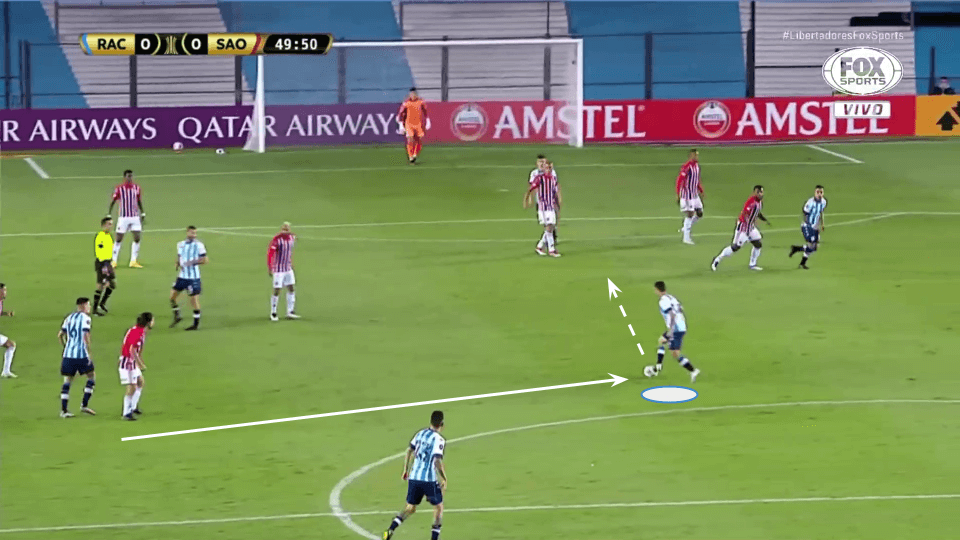 When they reached the opposition half, Racing looked to play quickly and directly. Their possessions weren’t very long and they dominated the ball by recovering it quickly rather than by keeping it for long periods.

There was a lot of running in behind from Racing’s striker, be it Maggi or Cvitanich when he came in. They pinned the centre-backs with constant movements in behind and prevented Sao Paulo’s defensive line from closing down spaces and playing closer to the midfielders, creating a perfect space for Lovera to operate comfortably.

The Argentinians also managed to create a lot from the wings despite the wing-backs not being especially offensive. Both Cáceres and Mena timed their runs very well to get into good positions and crossed a lot of times (5 crosses and 0.64 xA between both). Racing used the wings very effectively in general and attempted 16 crosses in total.

Racing entered into Sao Paulo’s half 72 times in the game, reaching the final third in 60% of those possessions. Sao Paulo, on the other side and despite possession being quite balanced (52% for Racing) only managed to reach Racing’s half 47 times, and only 45% of those attacks reached the final third.

This dominance translated into some good chances but the finishing wasn’t the best. They also had a goal disallowed for offside in a very good cross from Mena. Their clearest chances came from set-pieces but anyway, they deserved to score and win the game. Looking at the xG for this game, Racing got 1.86 while Sao Paulo only got 0.35.

The aspect of the game in which Racing dominated was the press as we’ll see in the following section of this analysis.

Racing pressed very high during the whole game and only allowed 7.48 PPDA. By doing this, they forced Sao Paulo to play long balls, which isn’t their usual style, or advance with one of the wide centre-backs and taking risks with passes to central areas.

The home team orientated their press so Sao Paulo were forced to play to the right and build up with Arboleda, forcing him to leave his position to then recover and attack his back. If the Colombian centre-back tried to play line-breaking passes, Racing’s midfield was very intense and aggressive to press the man receiving the ball, recovering it or forcing him to play backwards.

The following sequence is a very good example of how well-organized and intense Racing were in the press. In the first image below, we see how Racing man-marks every player except Sao Paulo’s right centre-back, who receives the ball. 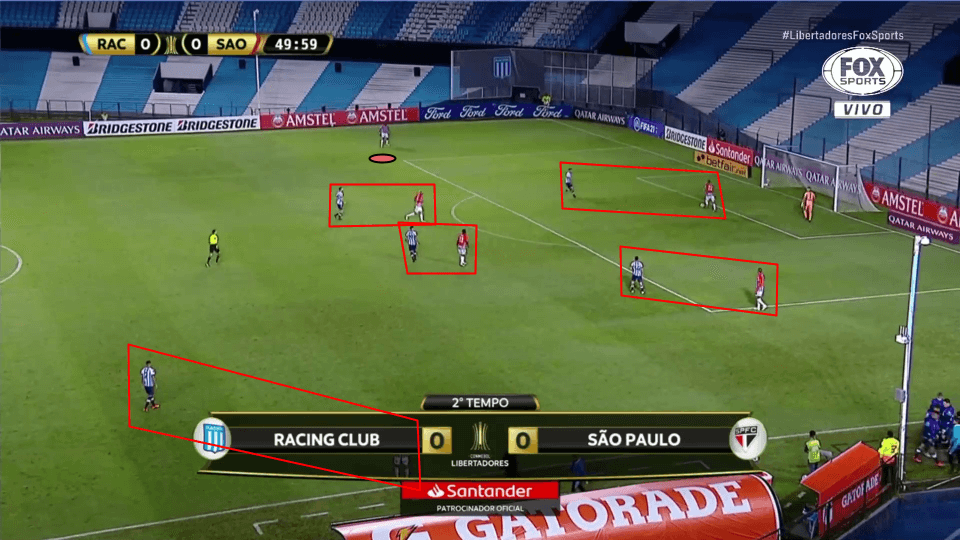 Once Arboleda receives the ball, Racing’s striker presses him very intensely, forcing him to make a decision and pass the ball into a zone dominated by Racing players. As man-marking persists, the pass is very risky and the Sao Paulo midfielder who receives the ball is forced into a mistake as he’s surrounded by several pressing rivals. 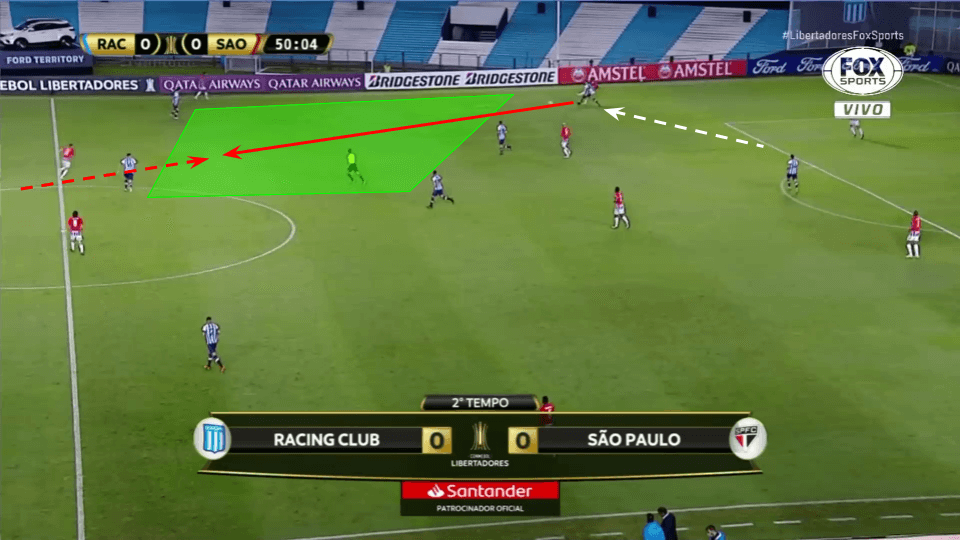 Below we can see another example, this time further up the pitch for Sao Paulo. The same logic applies. Arboleda is forced to take risks on the right side and when he plays the inside pass, the receiving player isn’t in a good position to turn and has to play in a zone dominated by Racing players. 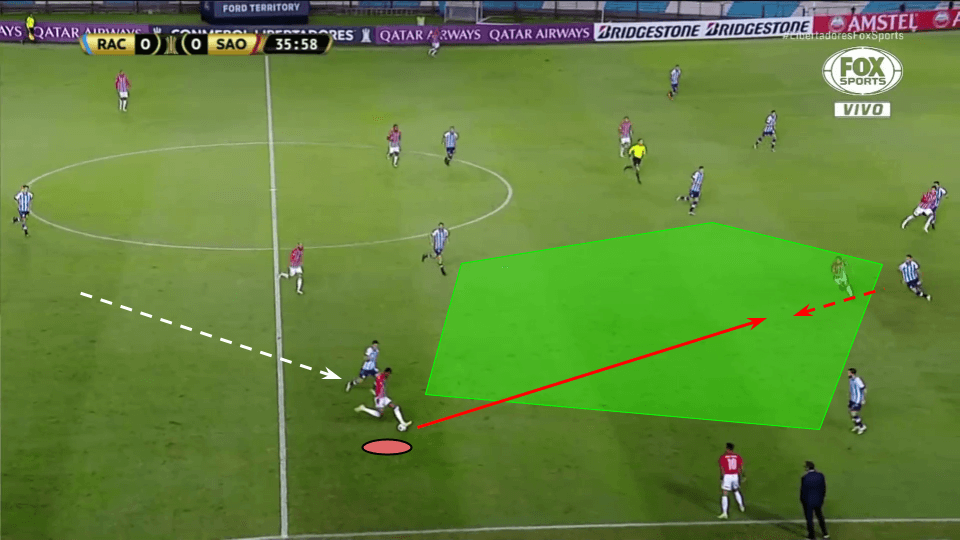 Notice how the striker is key at putting pressure on Arboleda and forcing him to rush into passes and the left centre-backs doesn’t doubt to leave the defensive line to follow the supporting player and prevent him from turning comfortably, as opposed to what Sao Paulo did with Lovera.

As we saw in the previous sections, Racing dominated the game with their aggressive style and Sao Paulo couldn’t find a way through the home team pressing tactics.

Despite having more attacking wing-backs in Alves and Reinaldo and looking to attack through the wings as dong it through the middle was very difficult, Sao Paulo struggled to create danger and only attempted seven crosses. Reinaldo was the main attacking threat of Sao Paulo, providing three out of the four crosses from the left side and being the only player from the Brazilian side to register any xA with 0.3.

Another player who did quite well to help his team was Pablo, the striker. He dropped deep or made runs into the wings to receive direct balls and was good at holding the ball while waiting for teammates to arrive. However, he wasn’t found often enough and when it happened he was too isolated so he couldn’t create much.

Sao Paulo’s two only chances came through a good cross from Reinaldo in the first minutes when the shot was saved spectacularly by Racing’s goalkeeper Arias and with Dani Alves hitting the crossbar from a free-kick.

It was a very attacking poor performance from the Brazilian side in general. They had some technically superior players in Alves, Benítez, Luan, Pablo, Reinaldo or Eder when he came in but they struggled to get the ball in good situations and were completely blown away from the match by their rivals’ intensity.

Another key point of Racing’s press that prevented Sao Paulo from taking advantage of their technical superiority was the Argentinians’ intelligence to commit fouls in good positions. Every time Sao Paulo managed to break their press, especially if it was by dribbling or running with the ball, Raving were quick to foul them and stop their attacks before they could take advantage of spaces in behind.

Most of the fouls were committed in the half-spaces in Sao Paulo’s half when the centre-backs drove the ball forward or when a creative player came deep to try to turn and progress as we can see in the map below, representing Racing’s fouls in the match. 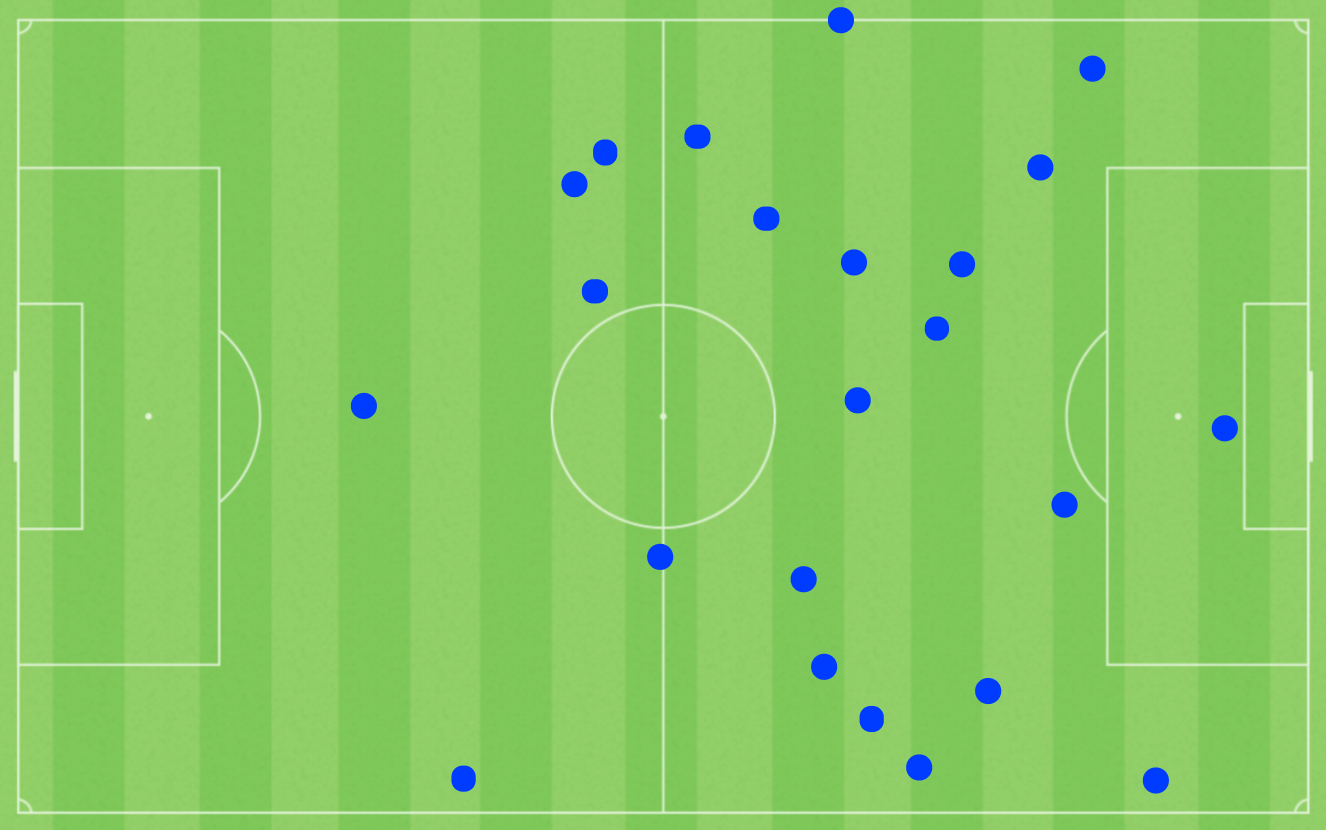 It was a typically intense Copa Libertadores match and the attacking players didn’t have the chance to show much but it was very interesting from a tactical point of view as Racing pressed very well and dominated the game without having long possessions or attacking constantly.

Hernán Crespo will need to work on his team’s buildup and progression as they were unable to advance for the whole match but the draw was a good result for them given the difficulties they faced and they’re still in the race for the title.