At the end of January, the defending MLS Champions unveiled their newest addition to the squad. Joao Paulo was announced as Seattle Sounders‘ third designated player, a sign that they were only planning on improving as they headed into the 2020 MLS season. The player made the move from Botafogo on loan.

But to fans of the MLS, Paulo might be a relatively unknown player. He has been playing competitive first-team football since 2010 but has only played in his home country of Brazil before making the move to America. This tactical analysis and scout report will hopefully introduce Paulo to curious fans and identify exactly how he might fit into Brian Schmeltzer’s tactics.

Paulo started his career in Brazil and has played there his whole career. He has played 125 games in the country’s first-tier, and 69 in its second. In those games, he has scored a total of 12 goals and recorded 15 assists. He plays as a central attacking midfielder but has experience playing on the right side of the midfield as well.

Despite having a low direct goal involvement, Paulo is dangerous in his team’s build-up. He is also known for his good deliveries from set-pieces as well. In the rest of this analysis, we will identify how these skills will be a benefit to the Sounders as they look to successfully defend the MLS Cup.

When taking up a central position, Paulo looks to receive balls from his teammates and quickly transition up the field. Many of his passes look to release players into space in wide areas. We can see an example of this in the image below. As he dribbles into the free space, we can see his teammate making a darting run down the left-wing. 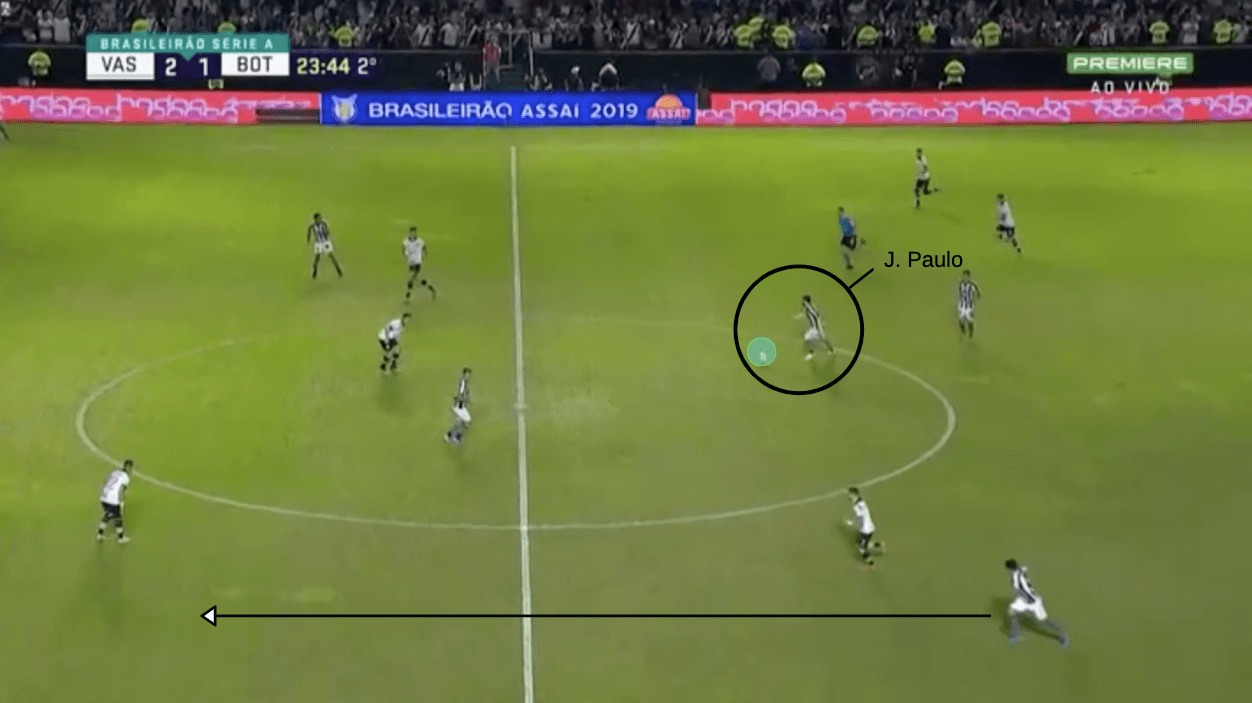 Paulo plays the ball into the deep area, allowing his teammate to explode into space. This passage of play breaks the midfield lines and creates a 1v1 in a wide area. 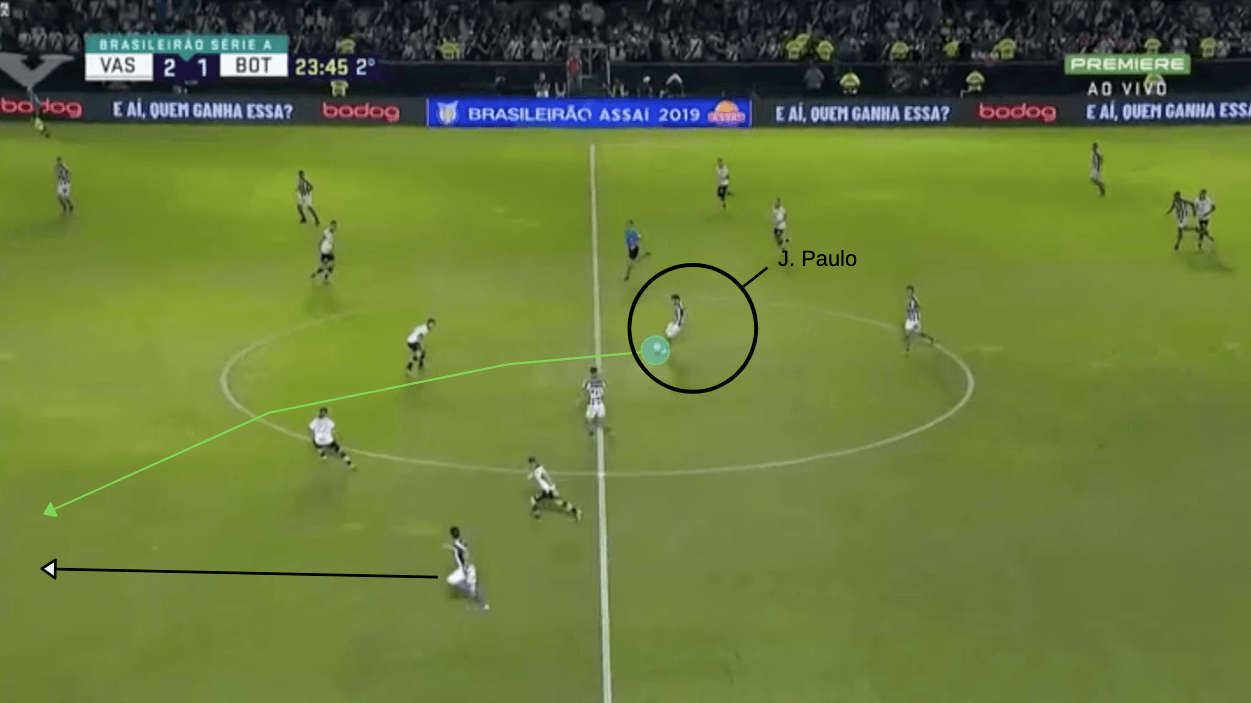 The above example shows how Paulo can help his team quickly break from deep areas, transitioning from defence to attack. But Paulo has the ability to help create chances in more advanced areas too. Here we can see the midfielder drifting out wide to link out with the wide right player. As soon as the player passes the ball into Paulo, the Brazilian quickly plays a ball directly over the top of the defenders into the deep space out wide. 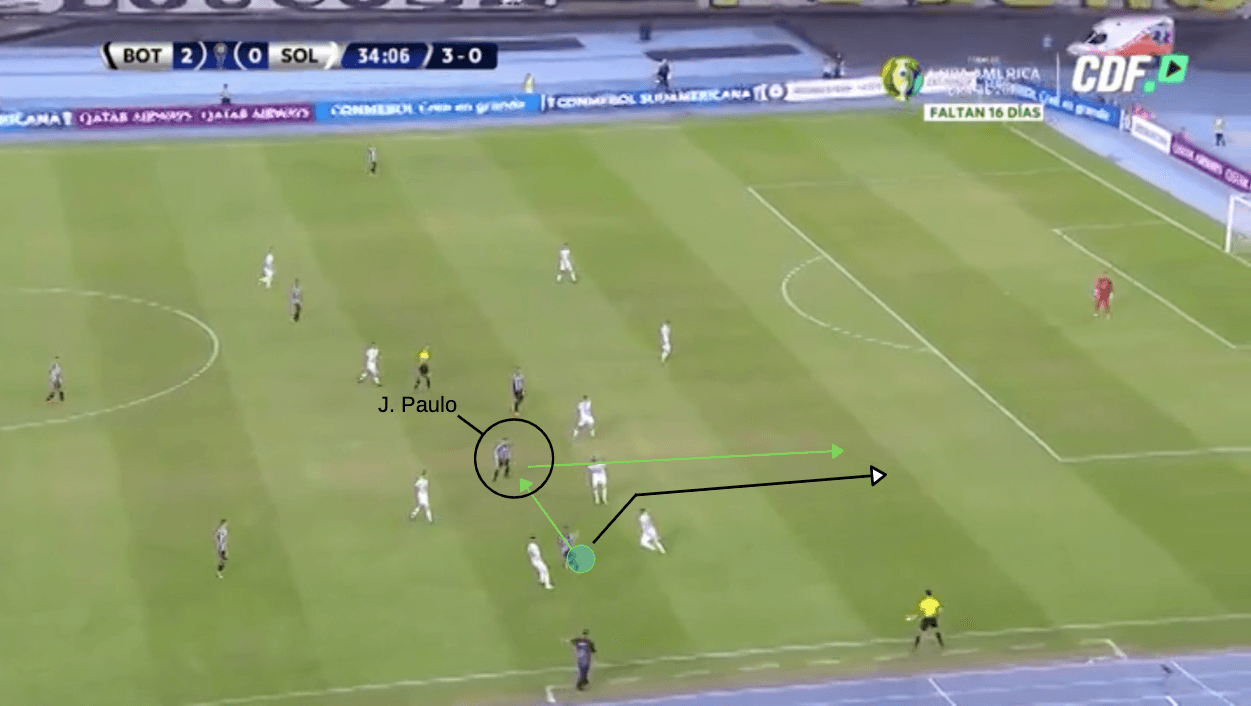 We can also see him look to play the balls out wide from a more central location. It must be said, however, that upon reviewing many of his highlights, Paulo has a varying success rate with these forward passes. This is especially true when playing longer passes from deep areas, or when attempting to release a player on his first touch.

It is clear that he takes risks with his passes, attempting to pull off the spectacular instead of playing it safe. But this shouldn’t necessarily be a concern for Sounders fans. When he pulls off these passes, they generally help his team transition up the field quickly.

The players’ forward passing accuracy, as mentioned above, is impressive. However, he does only have a 58.2% accuracy when it comes to long passes. He attempts 6.42 of these per game on average.

This style of play could suit Seattle Sounder’s star man Jordan Morris. Morris is known for quickly bursting into areas in-and-behind the opposition’s defensive lines. We can see an example of Morris linking up with Raúl Ruidíaz to create a 1v1 against LA Galaxy’s goalkeeper, which Morris converts. 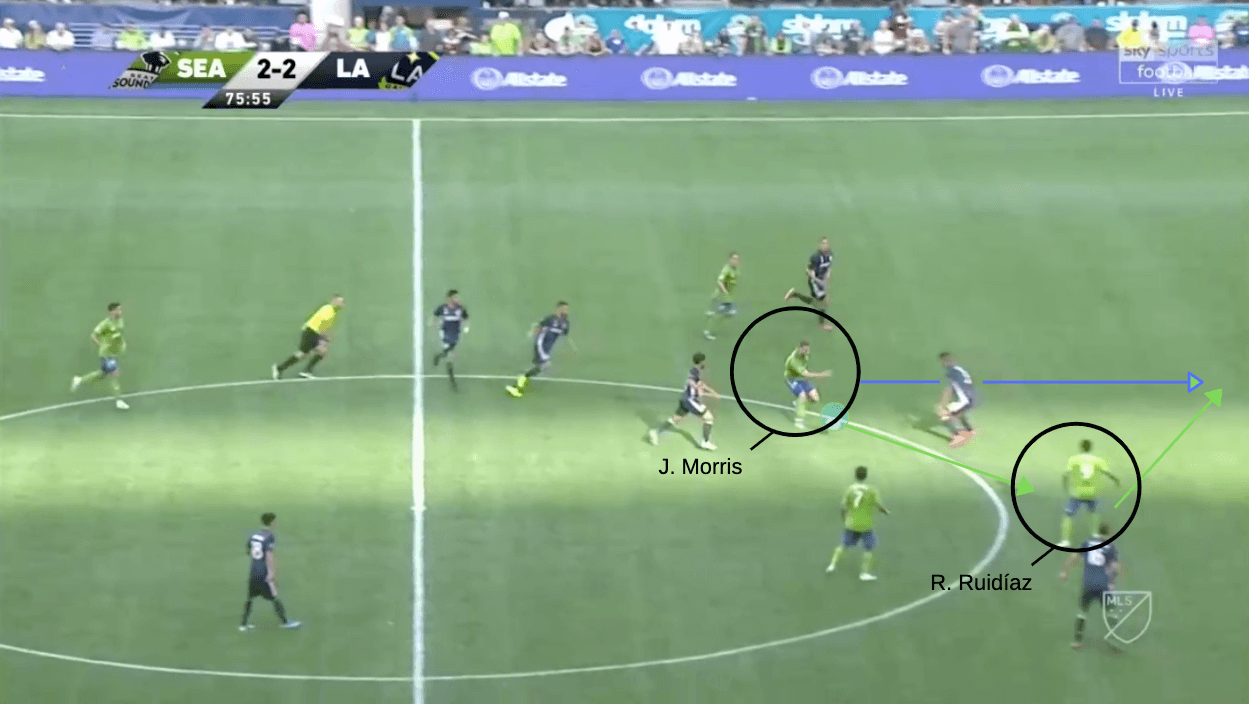 The introduction of Paulo to Seattle’s buildup play should hopefully result in Morris finding himself barreling down on the opposition’s goalkeeper much more regularly.

When Seattle completed the signing of Paulo, one of the main things that was mentioned about the player was his set-piece delivery.

“João is a tactically excellent player who solves problems on the pitch, while his passing and set-piece service will help us be even more goal dangerous,” said Sounders’ sporting director Chris Henderson.

Set-piece delivery has been a skill that Paulo has used throughout his career. On countless occasions, the Brazilian has assisted teammates after accurately placing a ball onto their head from a dead ball. He has assisted many times from corners, but free-kicks as well. The image below shows Paulo’s delivery from a deep freekick, one that his teammate manages to convert. 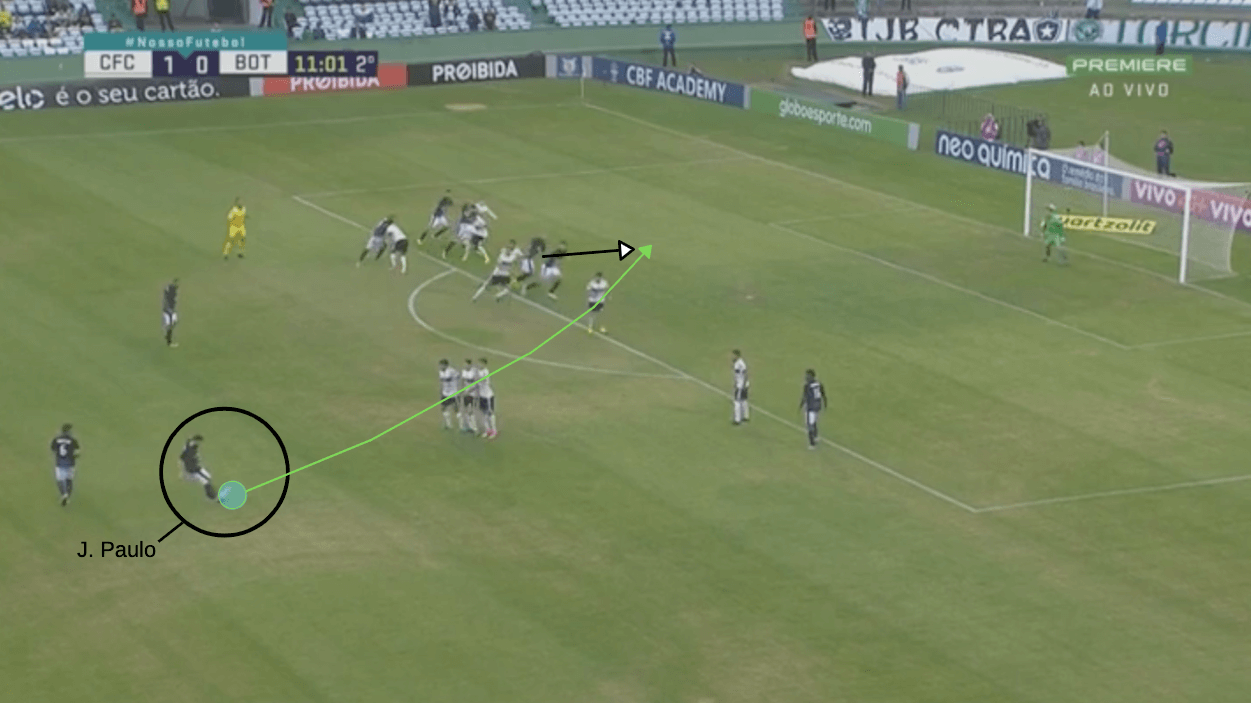 Of course, accurate set pieces are not necessarily useful if teammates are unable to get their head on the ball. Last year Seattle struggled when trying to create chances from corners, especially. They averaged 6.34 corners per game, but only recorded a shot from their corners 27.8% of the time. Their opponents on average had 4.71 corners per game, managing to achieve a shot from 31.6% of their efforts.

There is some potential for Seattle to become dangerous from set-pieces, however. Centre-back Xavier Arreaga wins 55.2% of his aerial battles on average, suggesting that he could be a threat in the air with the proper delivery.

But the Sounders will miss Roman Torres, who has recently made the move to league debutants Inter Miami. Torres won 63.7% of the aerial battles he was involved in last season. With the proper delivery, he could have been a huge asset in the air.

Things become a bit more worrying when we look at Seattle’s forward players. Jordan Morris, Will Bruin and Raúl Ruidíaz all struggle in the air, with an aerial duel success rate of 41.7%, 37.2% and 26.8% respectively.

The introduction of Paulo will certainly help improve deliveries into the box, but until the management can find a true aerial threat, it could be a moot point. Luckily, the Sounders have recruited Shane O’Neill from Cincinnati FC. The centre-back has an aerial success rate of 61.4%.

The side have also just recruited Yeimar Gómez Andrade from Argentinian side Unión de Santa Fe. It might take a while for the player to become accustomed to the MLS, but he does bring with him an aerial success rate of 68.2%.

So, while the Sounders have lost a player like Torres, they have seemingly replaced him in terms of aerial dominance. This, as well as the acquisition of Paulo, could be a slight indication of how Schmeltzer aims to win his set-piece battles this season. If this is true, then Paulo will be a massive asset to the defending champions.

Overall, Paulo should help create many more chances for Seattle Sounders this season. His instinct to always look forward is an asset that should prove useful to his new side If he can strike up a good partnership with Seattle’s current crop of attacking players, they could become a deadly force on the counter. Additionally, should the team’s new defensive recruits find themselves goal-hungry in the box, Paulo’s delivery could result in quite a few great strikes. Only time will tell before we know if bringing the Brazilian to Seattle was a smart decision. Hopefully this scout report and tactical analysis has shown exactly how Joao Paulo will fit into Brian Schmeltzer’s tactics