Hoffenheim, fresh off their DFB-Pokal defeat to Bayern Munich, came to SC Freiburg’s Schwarzwald-Stadion looking to pick up their fifth win in their last six Bundesliga matches. Freiburg, who sit just one place below them in the Bundesliga table, started the match just four points off of Hoffenheim. An even match led to both teams creating quality chances, resulting in a very even expected goals scoreline. Ultimately, Luca Waldschmidt’s penalty was the difference for Christian Streich’s squad. His shot propelled Freiburg to a 1-0 victory, keeping them in eighth place, one point off of Hoffenheim. 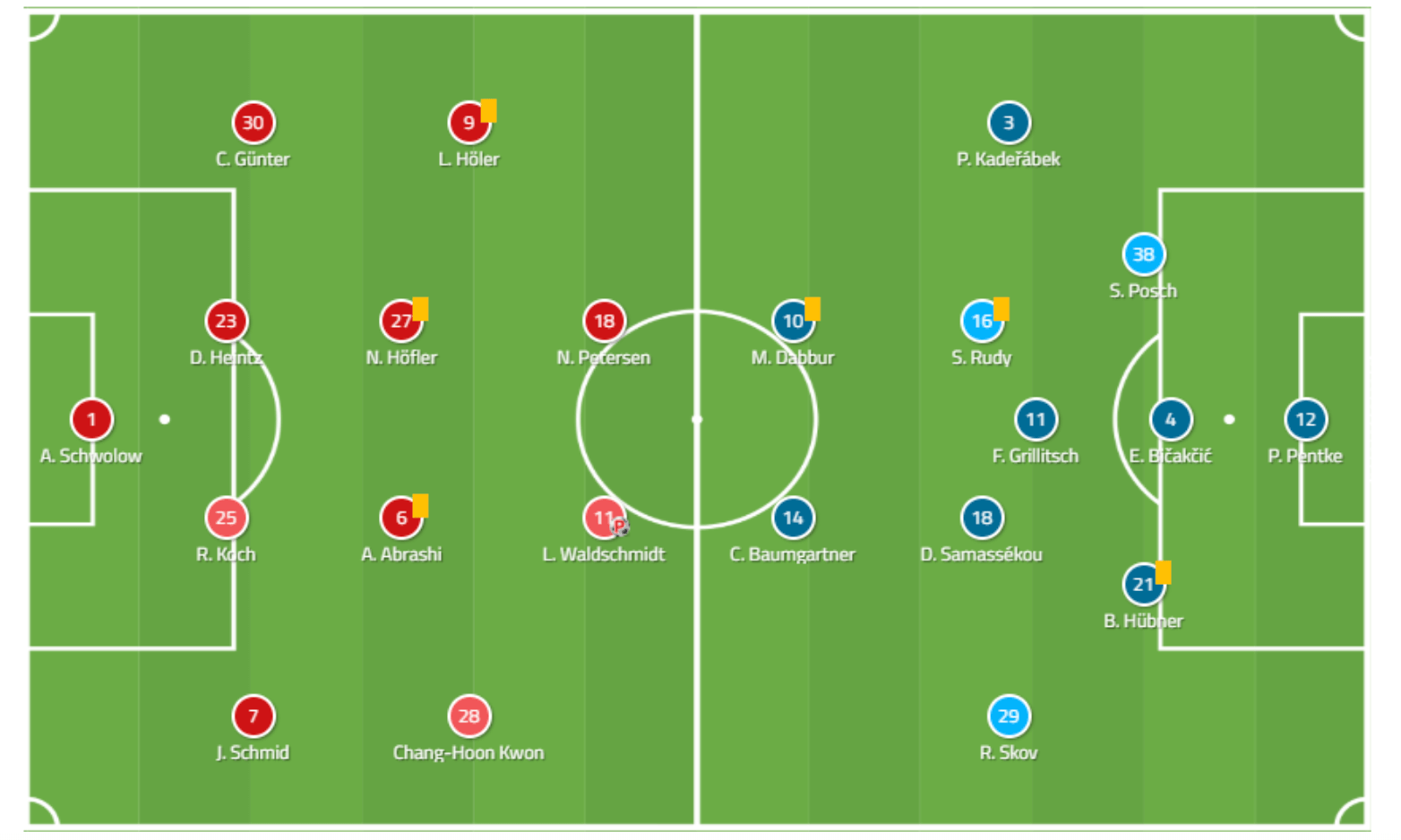 Christian Streich’s Freiburg lined up in a 4-4-2 with Alexander Schwolow in goal. In front of him, Dominique Heintz and Robin Koch were the centre back pairing, with Christian Günter playing as the left back and Jonathan Schmid as the right back. The two central midfielders were Nicolas Höfler and Amir Abrashi, who are both defensive midfielders by trade. Lucas Höler worked on the left wing while Chang-hun Kwon found himself down the right side of the pitch. The two strikers were Nils Petersen and the aforementioned Luca Waldschmidt, who scored the lone goal on the day.

Alfred Schreuder sent out his Hoffenheim squad in a 3-5-2 formation, looking to gain a man advantage in the midfield. Philipp Pentke started in goal as Oliver Baumann is still out with an injury. The three centre backs were the captain Benjamin Hübner, Ermin Bicakcic, and Stefan Posch. In front of the defenders were Sebastian Rudy, Florian Grillitsch, and Diadie Samassékou in the centre of the midfield. Robert Skov was the left winger while Pavel Kaderabek was on the right side. Hoffenheim’s two strikers on the day were Munas Dabbur and Christoph Baumgartner.

Freiburg looked to overload and outnumber Hoffenheim in key areas on the pitch in order to play through them. By creating a numerical overload, they were looking to be able to pass through their opponent, typically in the middle of the pitch. This would draw in the defenders, which could ultimately open up space for players to attack. 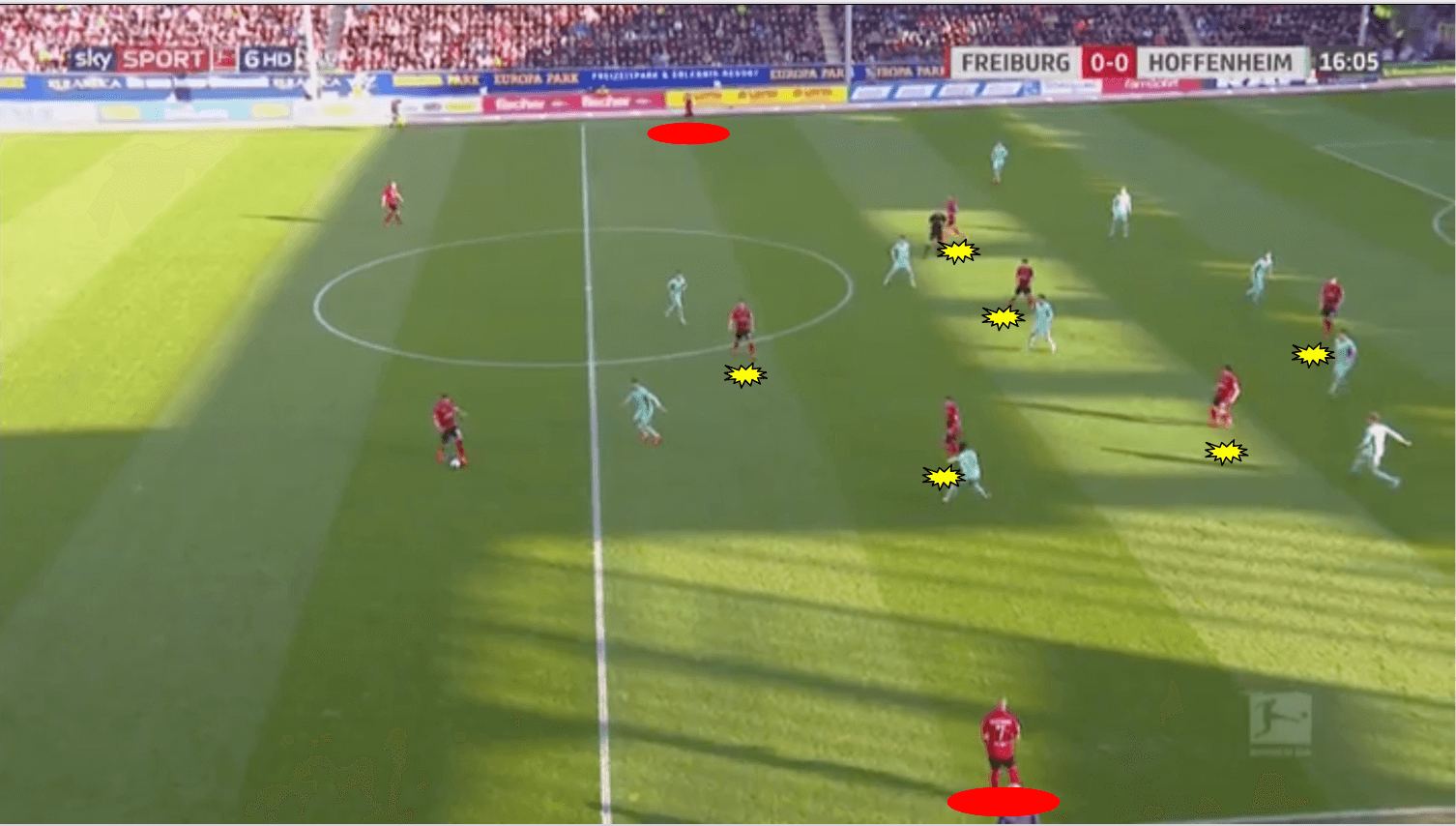 Freiburg worked to get their outside backs, Günter and Schmid, to play as wide as possible. In the image, they are both highlighted in red as the centre back has possession. As they work to create width, the six attacking players overload the centre of the pitch. This creates a problem for Hoffenheim, as they must compact their defensive shape in order to address the most pressing issue, which is the overload. By compacting, Hoffenheim has to concede the space along the outside to Günter and Schmid, who have plenty of space to receive the ball and attack. The result of the above play was a ball played quickly into the feet of Freiburg’s forward, who received the ball in the half-space, one of the most advantageous positions on the pitch. The forward’s second touch betrayed him, but Christian Streich will be happy with his team for having created the opportunity. 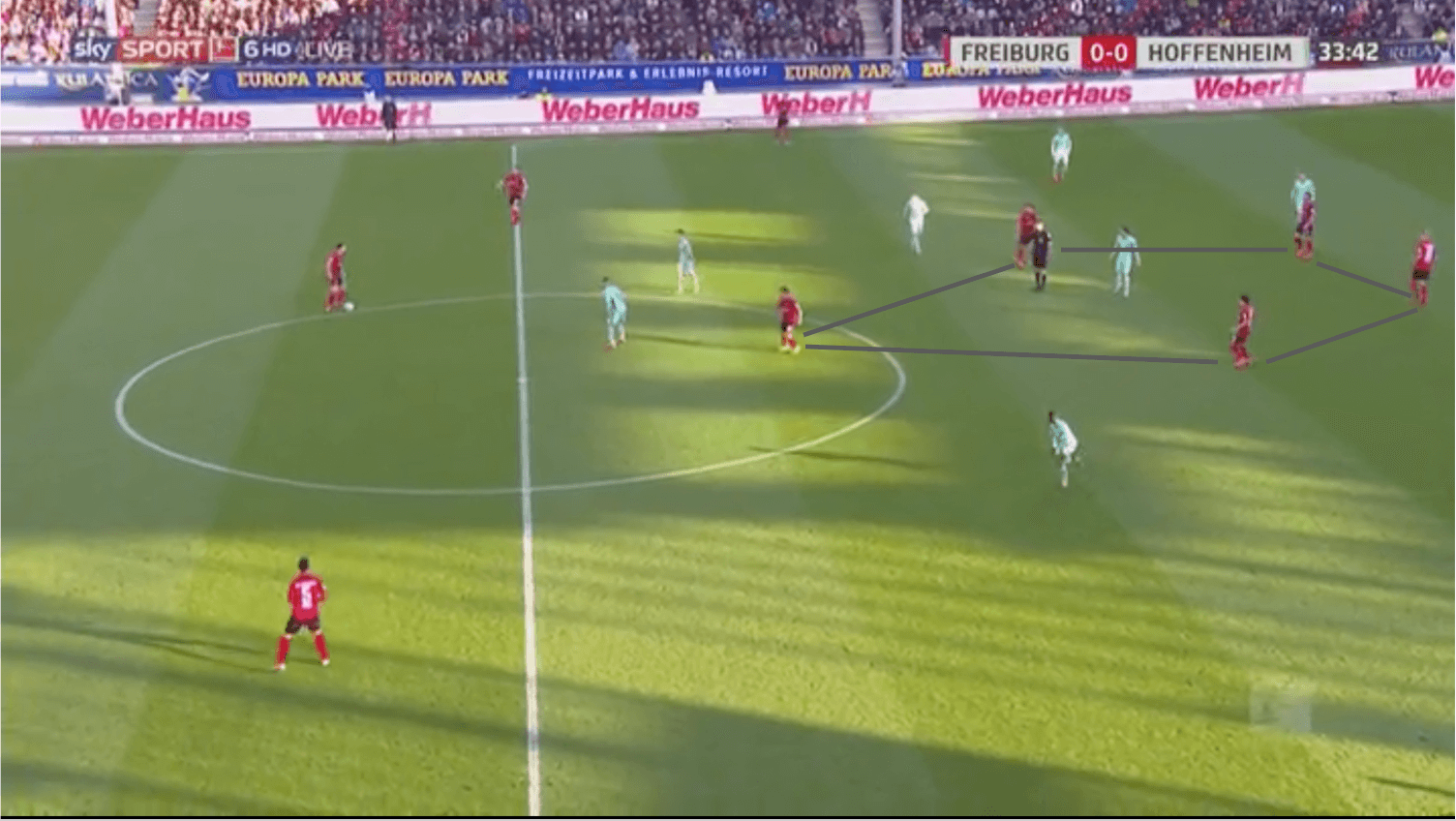 Freiburg continued to do this, even more narrowly, as they attempted to exploit space on the outside. In this instance, Freiburg have gone even more narrow as they build this hexagonal shape in the middle of the pitch as their central defender is in possession. This shape could be used successfully to draw in the opposition, but it can also be used to outnumber defenders. The holding midfielder Abrashi, located directly behind Hoffenheim’s two forwards, has two options if he’s able to receive a pass and turn. His options, the midfielders, are positioned away from the two defenders in space, ready to receive the ball and progress it up the field. The two Freiburg players highest up the pitch are also ready to make runs away from the ball, pulling their defenders with them. This ability to manipulate the defence creates space and time for Freiburg’s midfielders in the middle of the pitch.

Freiburg’s build up in possession

For the first half of the match, Freiburg were generally able to progress the ball up the field without much of a problem. If Hoffenheim sent men forward to press the ball, they only did when Freiburg had a goal kick. Freiburg’s response was to have Schwolow send the ball long and not play it to his centre backs, who were standing on either side of him. If Hoffenheim lost possession, but the ball didn’t go out of bounds, Hoffenheim typically dropped off into their own half. This allowed Freiburg to find a fairly typical buildup structure. 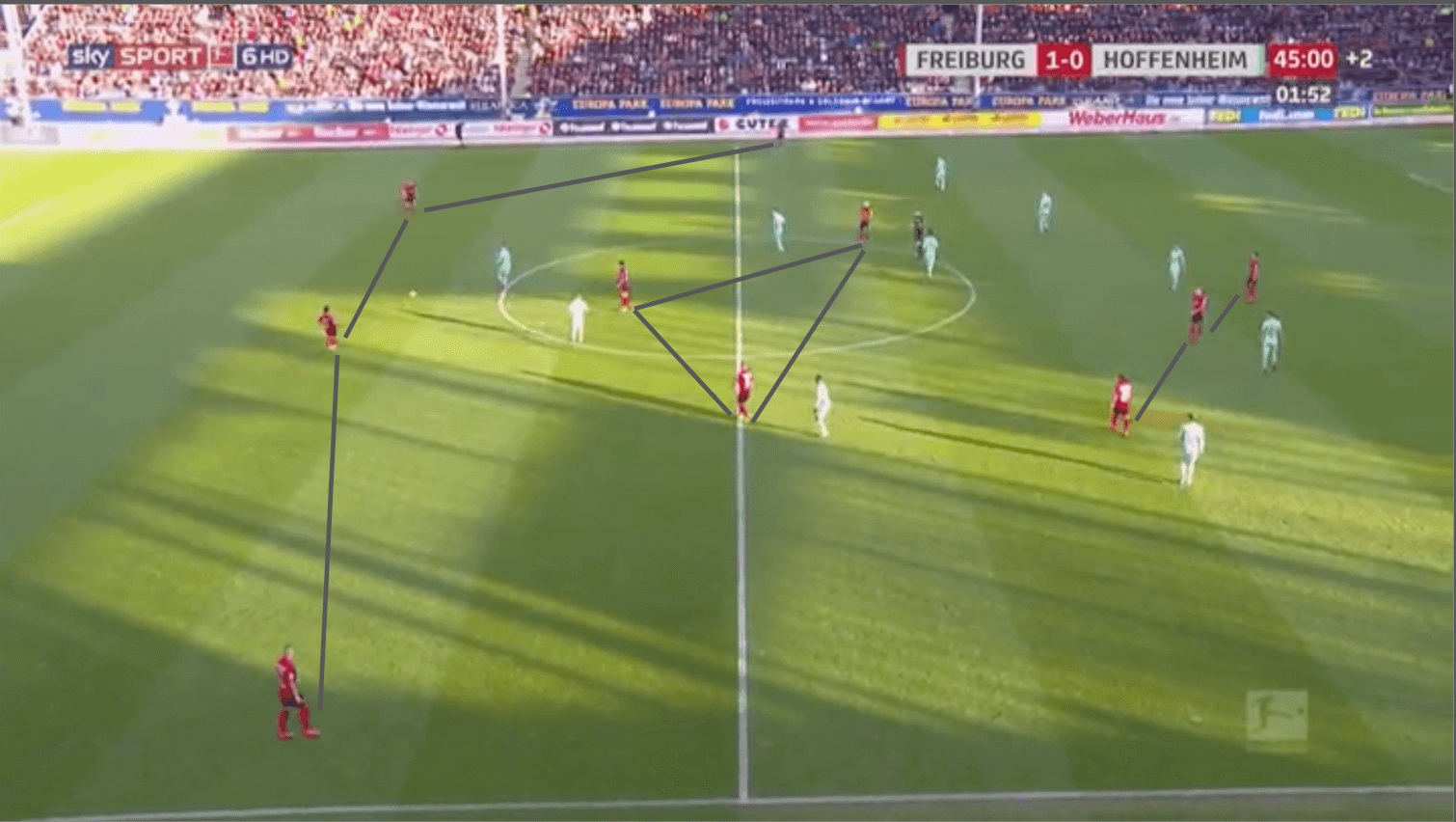 Either Koch, Heintz, or Gulde, who subbed on for an injured Heintz, would dribble up the pitch and Freiburg would find something similar to this shape. Outside backs would provide the width, and the midfielders would look to form a triangle, which would allow them to make passes that attempted to break lines of pressure. While the attackers didn’t always work as compactly as shown above, they did set up positions in the centre of the pitch to create those aforementioned overloads.

However, as will be discussed, Hoffenheim switched to putting more pressure on the ball out of the back, and Freiburg was forced to deal with it. They found the answer in dropping a midfielder to their defensive line. 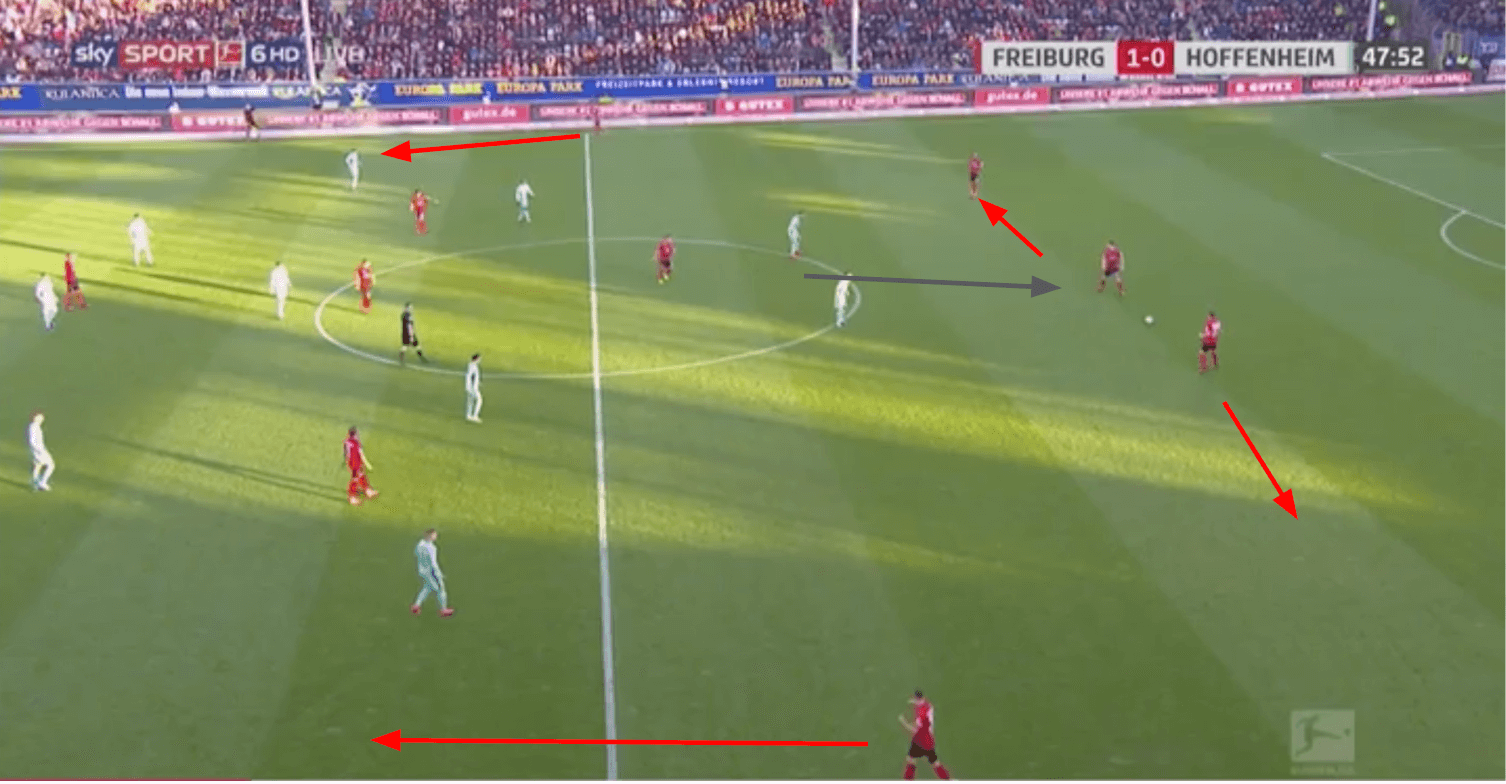 Nicolas Höfler drops to receive the ball from his centre back. This causes a chain reaction of movements by his teammates to find better positions. Heintz and Gulde, the centre backs, push out wider, which then causes the outside backs, Günter and Schmid, to be able to push even higher up the pitch and continue to provide width in an attempt to spread Hoffenheim out. 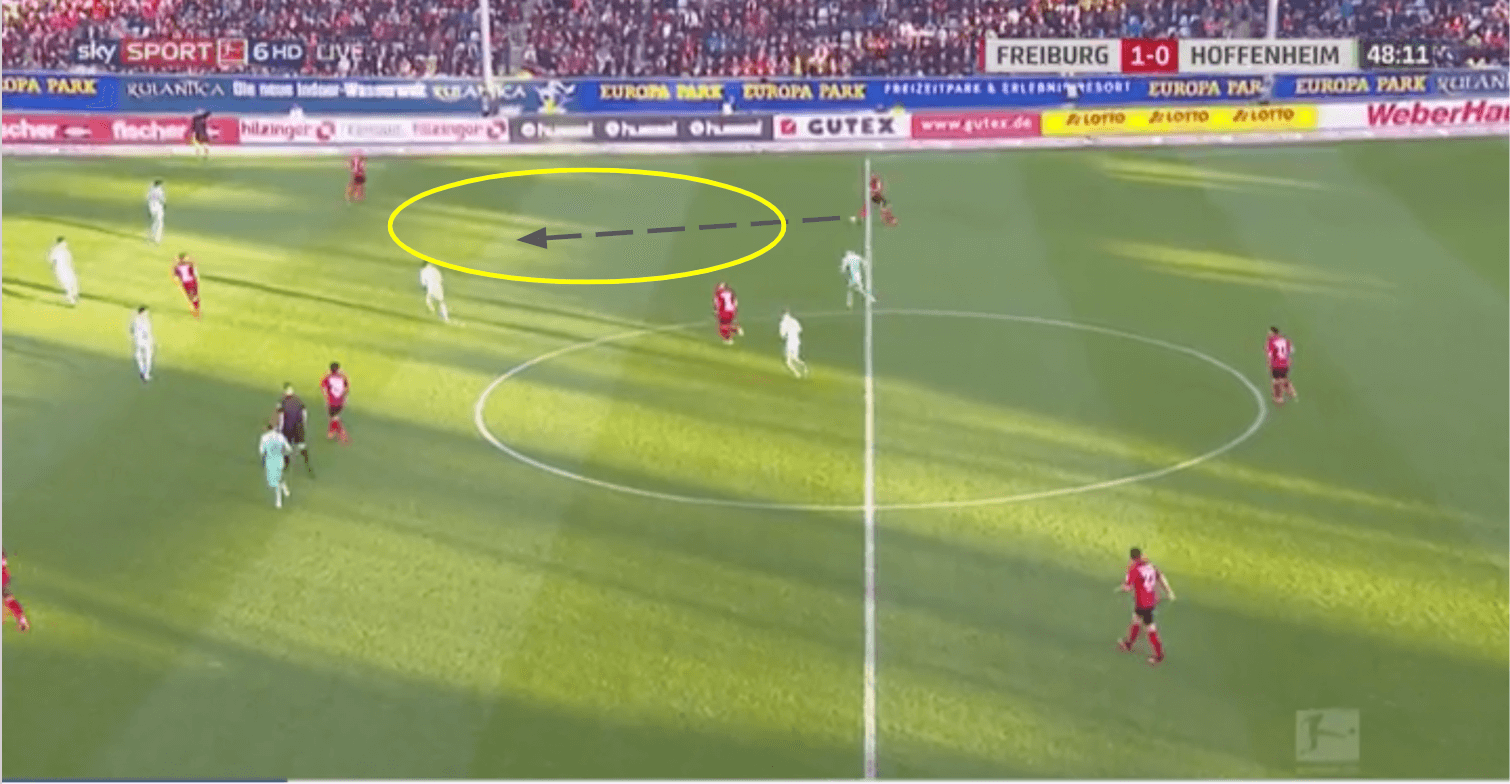 Freiburg possess the ball and as Hoffenheim adjusts, space for Gulde to attack opens up. Höfler plays the ball to Gulde, whose first touch is an effective one forward into all of the space in front of him. As he attacks the space, Hoffenheim must close him down, which ultimately creates a 3v2 situation where Freiburg’s attackers are outnumbering Hoffenheim’s centre backs. Unfortunately for Freiburg, they were unable to possess the ball properly in this situation, but the chance and the overload was still created successfully.

One of the main reasons Freiburg had to change their build up was because Hoffenheim switched their tactics in the second half, putting a lot more pressure on the ball in their attacking third. This was brought about most likely by the fact that they went down a goal after Luca Waldschmidt buried a penalty. Hoffenheim looked to force Freiburg to send the ball in the air down the pitch, which they hoped would result in more possession. Hoffenheim’s tactical changes made sense; in the first half, they only saw 43% of the possession, which shifted to them seeing 54% of the possession in the second half after switching to the press. 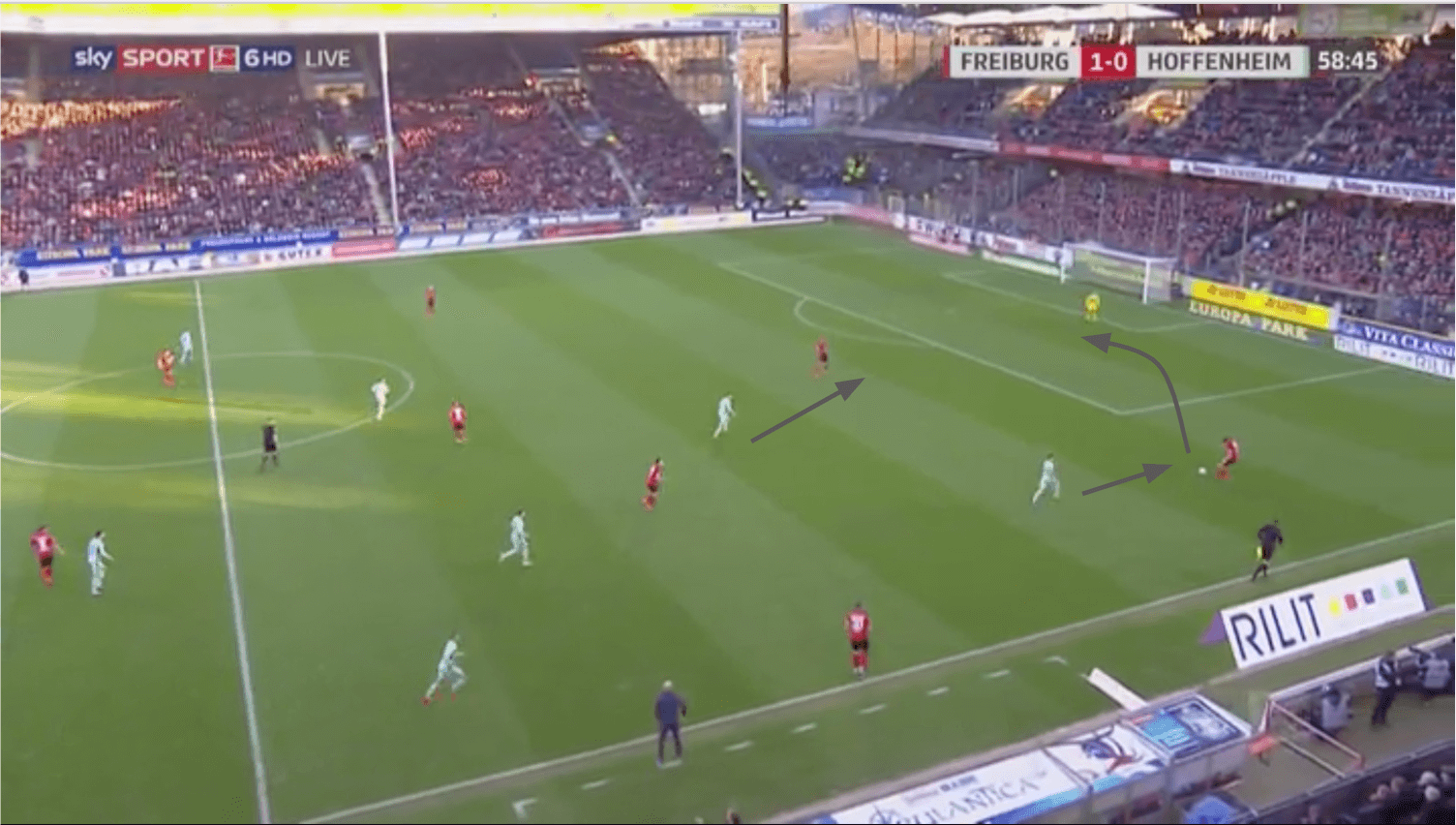 Off of a thrown-in, Freiburg sends the ball back towards their own goal. The two forwards, Munas Dabbur and Christoph Baumgartner, provide pressure on the centre back and then the goalkeeper, forcing the ball to be played long. In this instance, seconds after Alexander Schwolow sends the ball long, Hoffenheim are able to recover possession. This is incredibly encouraging for Hoffenheim, as they only needed to commit two players forward in order to win back the ball.

This press became even more efficient when Hoffenheim subbed on Ihlas Bebou as a forward and dropped Baumgartner into the midfield. Bebou’s speed and ability to close down the opponent allowed for Hoffenheim to see even more of the ball, with them seeing 69% of the possession for the first 15 minutes he was on the pitch. 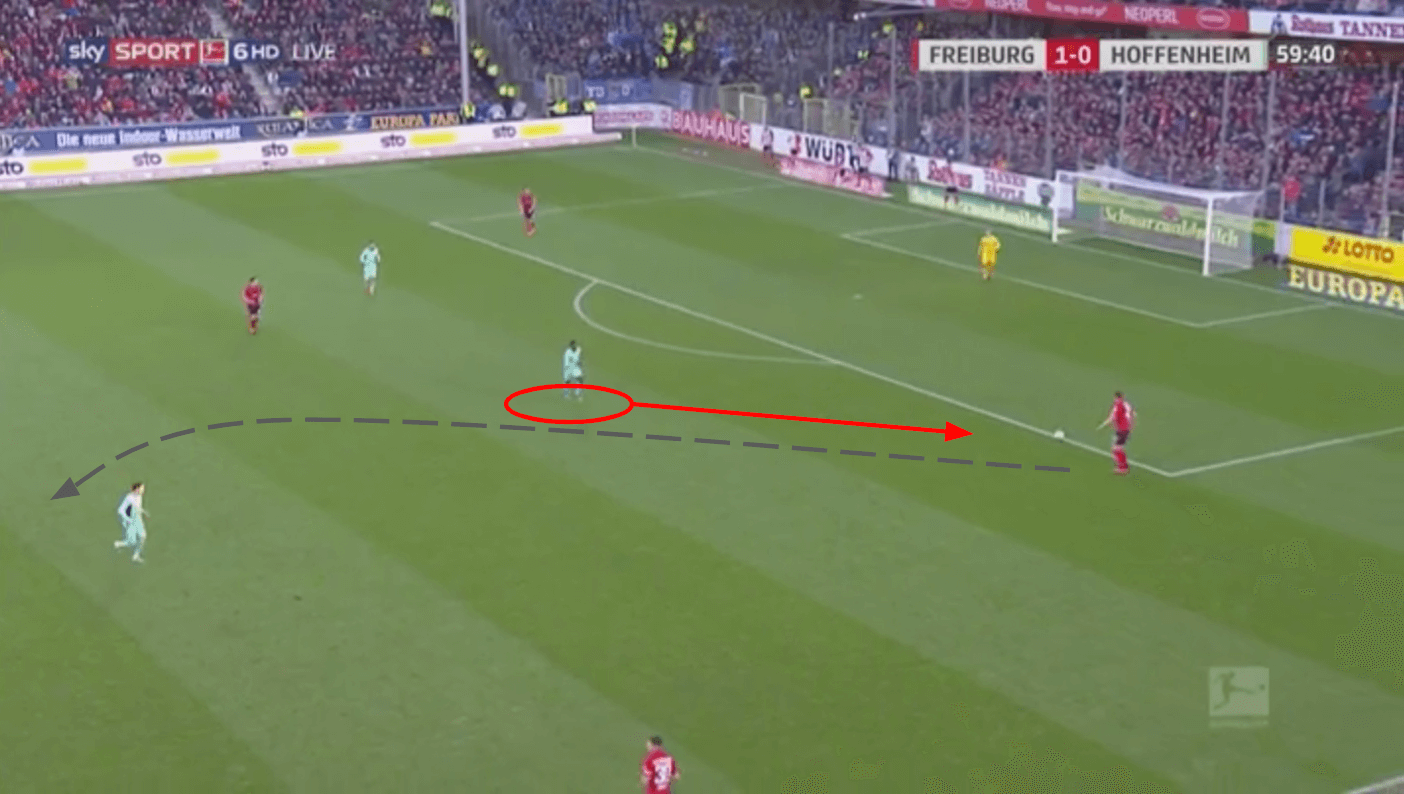 As Heintz finds himself in possession, Bebou is far away from him. Heintz has options up the pitch as well as his goalkeeper who could quickly switch the ball to the other centre back. Heintz also has the possibility of finding his holding midfielder, but he was unable to get out of Bebou’s cover shadow, effectively rendering him useless in this situation. Bebou closes down Heintz so quickly and intelligently that Heintz has no choice but to clear the ball, turning it over to Hoffenheim in the process. Hoffenheim used their forwards to continue to pester Freiburg’s backline, quickly earning more possession in the process.

Hoffenheim build up through middle

Along with switching to the press and seeing more of the ball, Hoffenheim’s ability to build up through the middle quickly provided them with some of their best opportunities of the match. A lot of these began as Freiburg tried to become more compact in their own half, but were forced to expand because of Hoffenheim’s width. 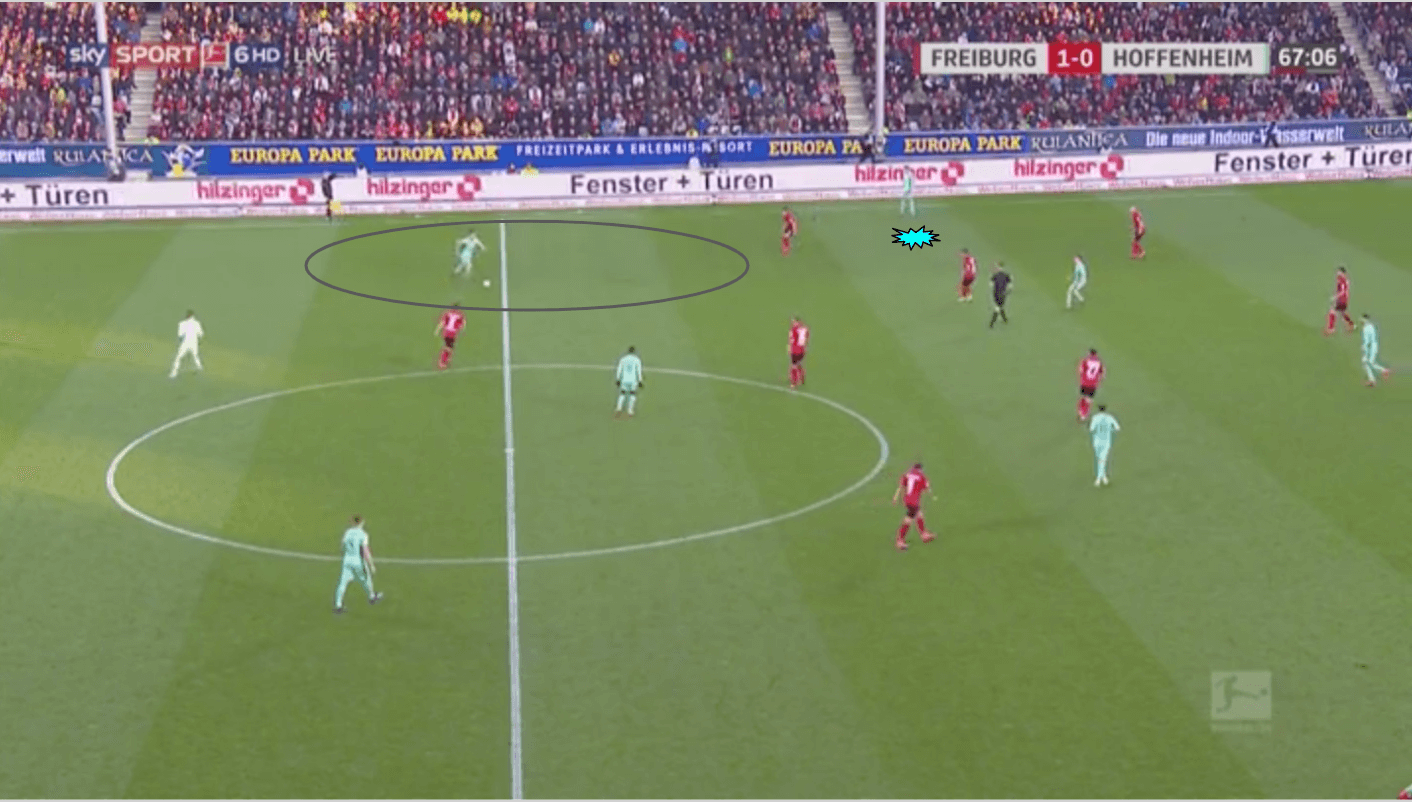 Here, Benjamin Hübner finds himself in space with the ball. To his left, up the pitch, is Robert Skov, essentially on the touchline. While not in the image, Pavel Kaderabek is providing the same width on the right side. Freiburg obviously doesn’t send a defender to the right side, but their outside backs will be tempted to cheat over two to three metres to close down any passes. These two to three metres are vital: they force the central Freiburg players to cover more space, which opens up passing lanes, which Hübner takes advantage of in this case. 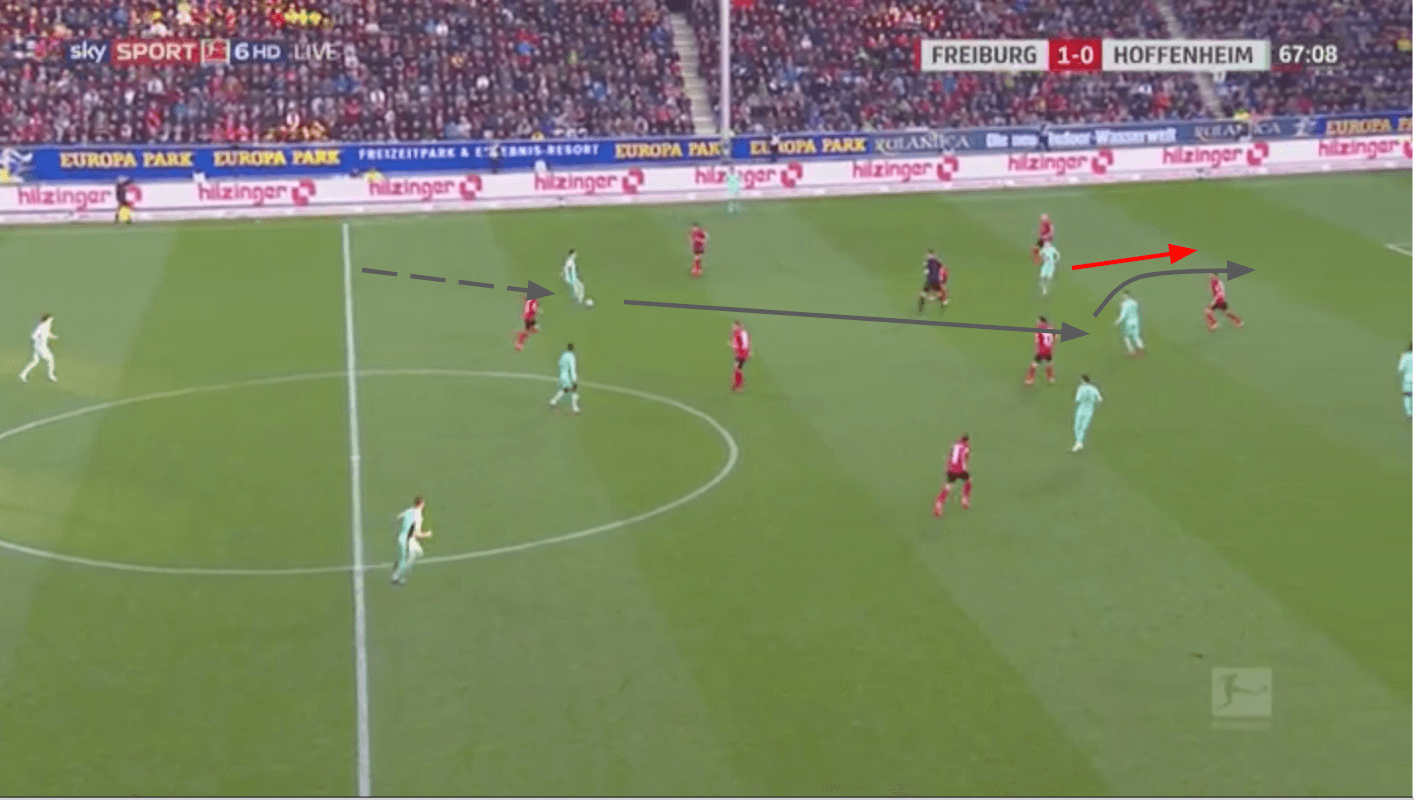 Hübner dribbles forward in order to attract pressure. As he does, his teammate checks to the ball. Hübner plays a long pass on the ground, and a simple flick from the striker puts Christoph Baumgartner in on goal. The shot ultimately bounced off the goal, but Hoffenheim had discovered what would work: long passes through the midfield with a short layoff immediately following. 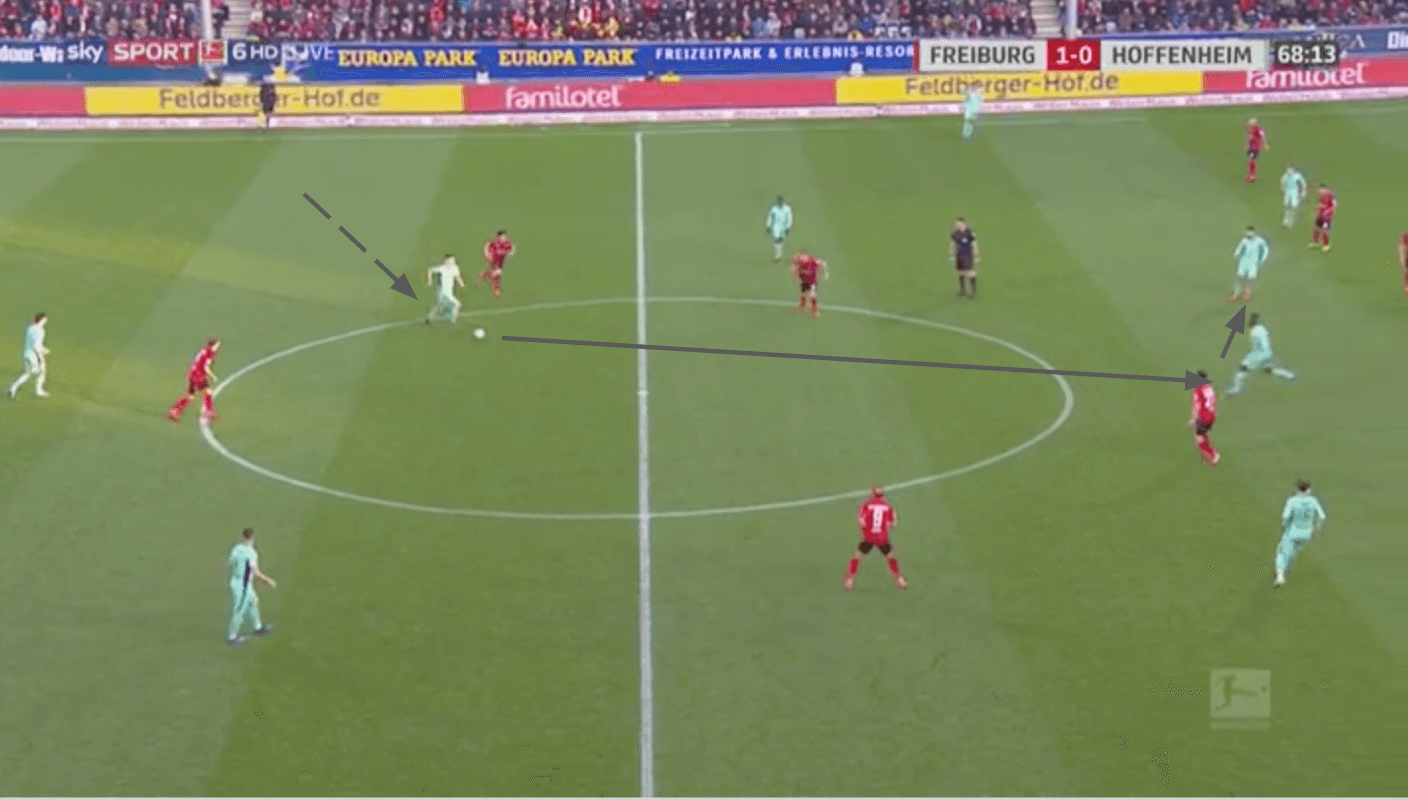 Again, Hübner attracts pressure as he drives forward with the ball. As he drives forward, Bebou, who had done so much to win the ball back for his team, checks towards his teammate. Hübner plays another long pass, and Bebou plays a quick wall pass to his teammate, which opens up space for Bebou in front of the four defenders. Freiburg continues to drop off and allows Bebou to take a shot, earning another quality chance for Hoffenheim. Their width created the passing lanes for defenders like Hübner to play long, direct passes through the midfield in order to get players in on goal. Hoffenheim continued to use this to create chances, but Freiburg remained disciplined and were able to escape with all three points.

After a close match, Freiburg ended their two game losing streak with a victory over Hoffenheim in the Bundesliga. Freiburg will look to continue their success as their next two matches definitely provide opportunities for them to gain points and possibly overtake Hoffenheim, as they take on Augsburg next weekend, who currently sit in 12th place, and then Fortuna the following week, who currently find themselves in 16th.

Hoffenheim have matches coming against teams towards the top of the table, with a showdown against Wolfsburg next Saturday, followed by a match against Borussia Mönchengladbach in two weeks time. Both Hoffenheim and Freiburg will look to pick up points as they are both respectively five and six points away from qualifying for the UEFA Champions League.