In a game which encapsulated the Bundesliga as a whole on Saturday night, Bayer Leverkusen took on Borussia Dortmund with both sides close in the table. Bayer Leverkusen were looking to get back on track following a disappointing defeat to Hoffenheim last game week, while Dortmund were looking to carry on their best form of the season, having scored 15 goals in total over the previous three game weeks. The game was equally a goal-fest, ending 4-3 to Bayer Leverkusen, and the game was all about the build-up play of both sides as well as the individual errors from both teams, which allowed build-up to be so effective in the game. In this tactical analysis, we will look at both sides build-up and presses, as well as highlighting some of the key reasons there were so many goals in the game and how Leverkusen ultimately won. 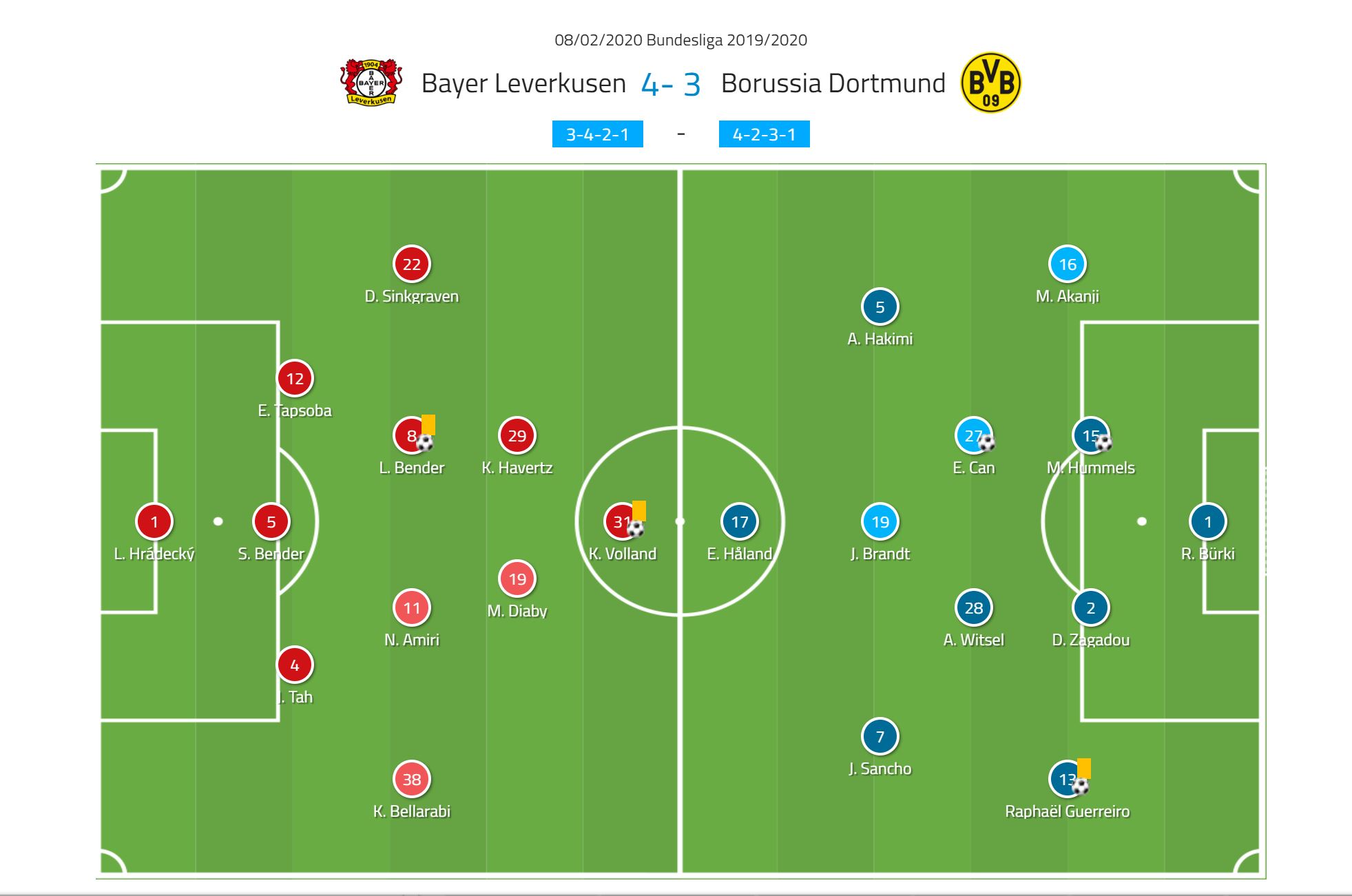 One of the main advantages to playing a back three is the ability to have more players further forward during the build-up phase, with another being that a back three has the ability to stretch the first line of the opposition press. We saw Leverkusen apply both of these advantages relatively well in the game, and they were able to score goals from these situations and tactics as we can see in the example below.

The stretching of the first line of the press often forced Julian Brandt to move up from the number ten to press the backline, this meant on paper, Dortmund were left with the midfield two of Axel Witsel and Emre Can. However, as mentioned, Leverkusen would drop into a 3-5-2 with Kai Havertz dropping deeper as he does in the example below. Havertz drops and Witsel presses him, leaving the two central midfielders for Leverkusen in a 2v1 against Emre Can if they could get the ball into the central areas.

We can see this illustrated below, with Emre Can (number eight) outnumbered by the central midfielders six and seven. Despite committing players onto the backline to press, Dortmund still couldn’t prevent the wing-back gaining possession, and so the full-back pushes up to press, which takes another player from their backline if they don’t retrieve possession. 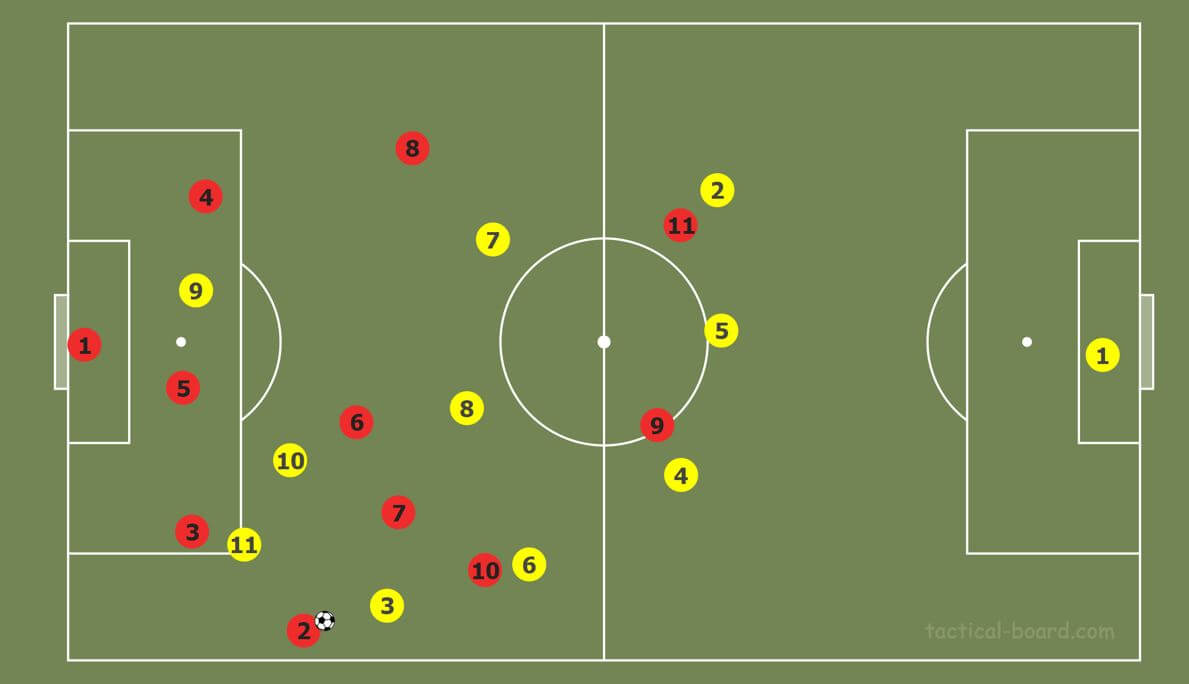 In this next example, we can see the same concept happening again, which occurs in the build-up to their first goal. Goalkeeper Lukáš Hrádecký plays a long pass into Kai Havertz, who is pressed by Axel Witsel in a central midfield area. Having started deeper, Nadiem Amiri continues his forward movement to support Havertz. Again this creates a 3v2 in the midfield, and a 2v1 on Emre Can. Full-back Raphaël Guerreiro tries to anticipate the pass to the wing-back Karim Bellarabi, but Havertz just plays the ball inside. 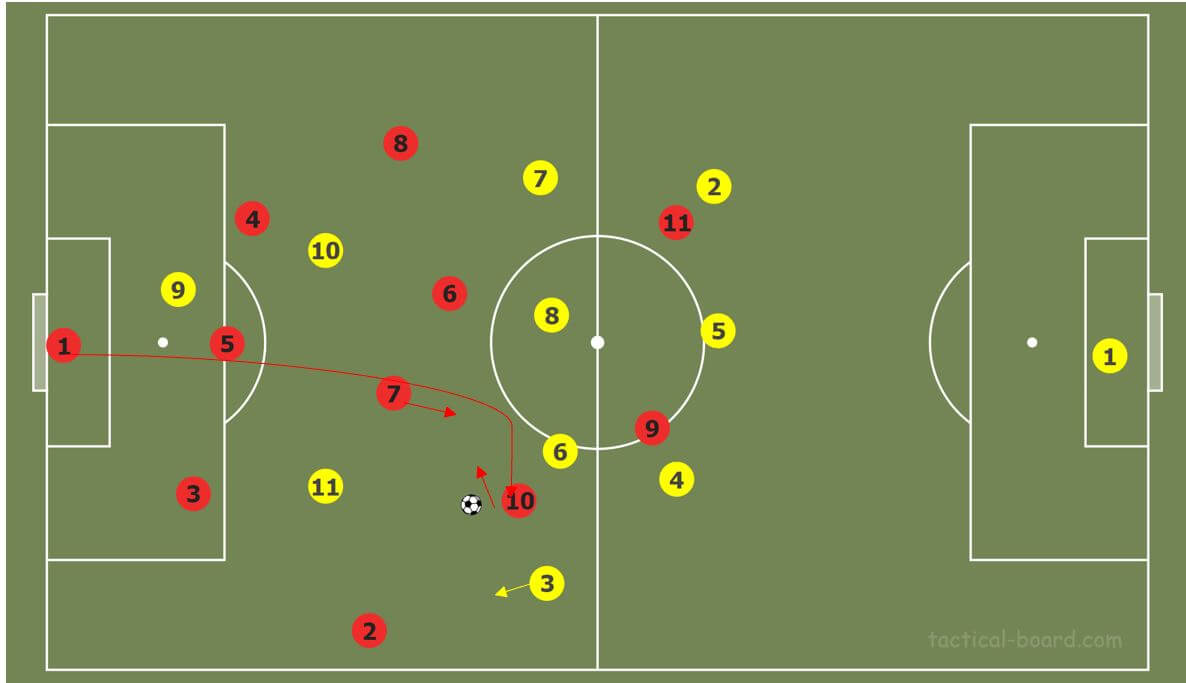 We can see this situation here below. In theory again, if Havertz does drop to receive and a player drops just in front of the defence, it would naturally be the role of the number ten to press this midfielder and keep close to them. However, as mentioned, the number ten Julian Brandt often pressed the back line due to Dortmund being stretched along this line. Therefore, as Havertz receives, Brandt is still with one of the three centre backs, and so Amiri is free to receive the ball and play through the middle. The positioning of the other Leverkusen central midfielder also opens this space up for Amiri, as Can is too wide to have an impact.

As a result, Leverkusen are able to get in behind Dortmund with one pass and score.

Leverkusen did not do a great job in pressuring the backline and Dortmund were allowed too many times to get the ball in the half-space and look to isolate and exploit the wide centre back. We can see below the problems they had, with the Dortmund full-back staying wide to increase the size of the passing lane, and the pressing player struggling to get across to deal with the player, which at times was due to Witsel dropping deeper. This meant that with one pass Dortmund could be up against Leverkusen’s defence, and this caused issues. 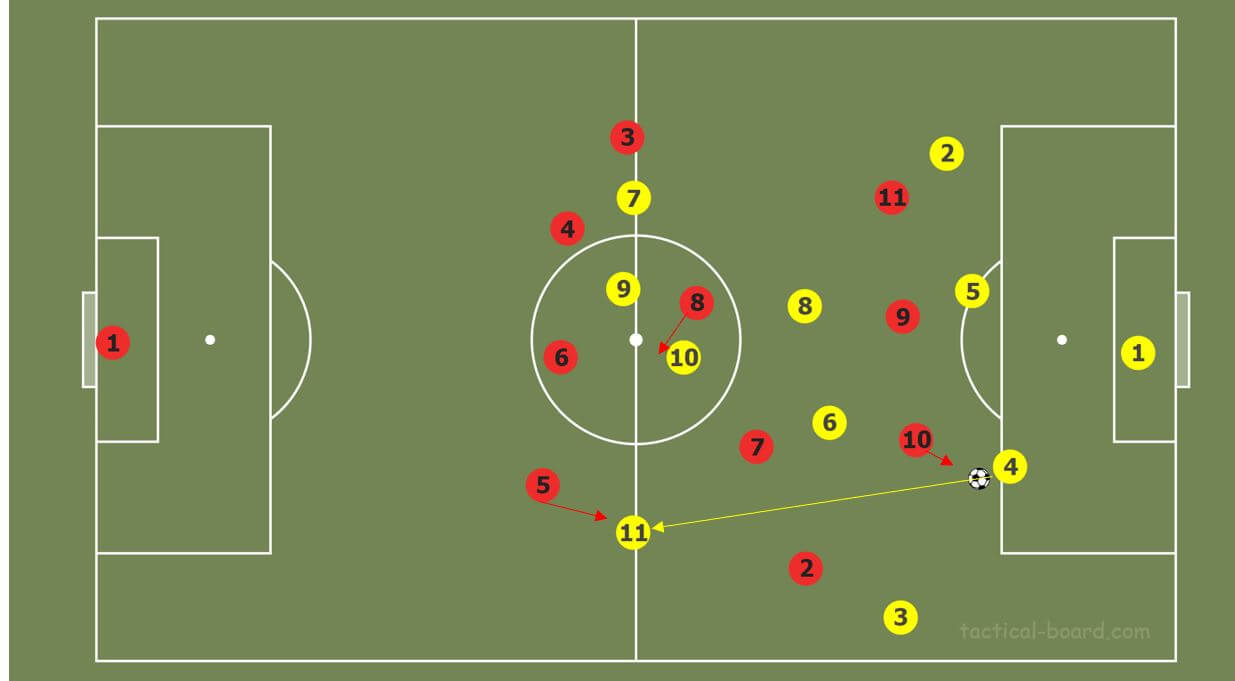 Just for proof, we can see below Dan-Axel Zagadou’s forward pass map, showing the number of passes he played into this half-space area. The receiver of this pass would differ from Julian Brandt to the winger, but with Brandt in a central area, it kept other Leverkusen midfielders also there. We can see Jadon Sancho here receiving with pressure from behind from Jonathan Tah, with the passing lane being made wider due to Bellarabi being focused on pressing Guerreiro if he receives the ball. At this point, the situation isn’t too bad for Leverkusen, as Sancho can’t play the ball inside with Brandt marked, but in other situations it caused problems.

We see the same pass here from Zagadou to Sancho, but this time Guerreiro pushes higher, and Bellerabi loses him, meaning Dortmund can progress up the pitch with Leverkusen missing a third of their backline effectively.

As a result of this space being conceded by Leverkusen, Jadon Sancho was able to isolate Jonathan Tah and cause problems. Karim Bellarabi also wasn’t a great help to Tah, and at times could have helped his countryman out, as we can see below. Here Havertz is able to do Bellarabi’s job for him almost, with Havertz pressing the full-back. This should be a cue for Bellarabi to drop deeper and help protect the wing, but instead, he stays in no real position at all, and the ball goes into this space triggering a race between Tah and Sancho.

Furthermore, it takes nine full seconds for Bellarabi to get back into the game, by which time Sancho has already threaded a pass inside to Brandt where Dortmund get a chance for a shot on goal.

We can see in the example below, having received the ball behind the midfield, Sancho has the chance to use his pace and dribbling skills in the 1v1 against Tah, and also has the option of Erling Braut Haaland down the line.

Again in this example, Bellarabi is caught in no useful position, which forces Tah to step up to deal with Sancho, which in turn creates space for Haaland to run into and drive up the pitch with.

My personal nickname for Kai Havertz is the title for this section, simply because it’s the place you see him creating space and receiving the ball in so often. Dortmund looked unprepared for this, and Leverkusen found it too easy at times to pick him out, where he has the ability to turn and play excellent passes into the strikers. Dortmund ultimately lost the game because they allowed Havertz to perform his signature move as we can see below, where he is able to receive the ball, turn, and play a pass into the striker for a goal. Here, it would be useful for the full-back to push in to deal with Havertz, or for the midfield to get tighter to not allow that pass through under any circumstances.

We can see in this example below, Havertz doing the same thing in a deeper area, and again is under no pressure and is allowed to turn. Again, the wide wing-back helps exacerbate this space for him, but he is excellent at using it.

Just for a bit of context, this is how Hoffenheim dealt with Havertz at the start of the season; such was their fear of his attacking threat. He was man marked for virtually the whole game and Leverkusen were held to a 0-0 draw. Other managers have also employed different systems to deal with him, all with differing success, but Dortmund didn’t seem to have a specific plan.

It was a strange but very entertaining game from two sides in similar positions in the table. Despite scoring so many goals in recent weeks, Dortmund continue to allow lots of goals in at the other end, and this will certainly be a concern to Lucien Favre. This was an important win for a Leverkusen side who have lacked ruthlessness in recent years, and picking up three points in the way they did eventually would have pleased Peter Bosz I’m sure.