In an extremely eventful UEFA Europa League clash between Villarreal and Arsenal, the La Liga representatives tallied a 2-1 victory over their Premier League counterparts. However, Mikel Arteta can be happy with this scoreline considering at one point Arsenal were 2-0 down and left with 10 men on the pitch against a surging opponent.

Still, the second half change in tactics from both sides shifted the tides and Unai Emery’s pragmatism almost ended up costing him dearly. This tactical analysis will dissect some key points from the game and tell you what transpired on Thursday night.

As ever, we’ll start the analysis by taking a look at both teams’ respective lineups. The hosts were deployed in a 4-4-2 formation, which did have the markings of a 4-3-3 with some variations as well and little to no surprises on the night.

The front two of Paco Alcácer and Gerard Moreno were often joined by Samuel Chukwueze while the midfield tandem of Dani Parejo and Étienne Capoue was reinforced by Manu Trigueros.

Unfortunately for Villarreal, Emery’s second half changes hindered the team’s tactics as they lost control of the game. But more on that later on in the analysis. 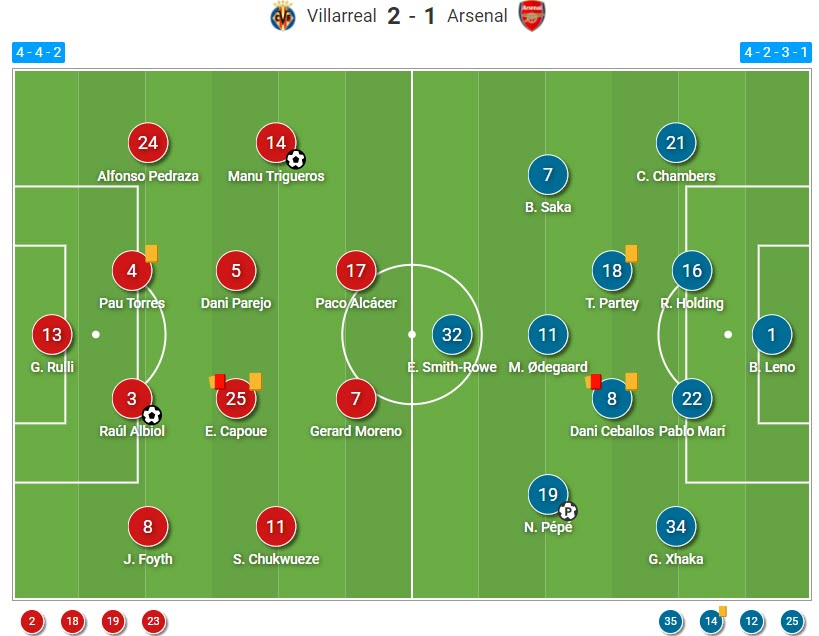 Arsenal also had their struggles on the night. Arteta essentially deployed a 4-2-3-1 or a 4-4-1-1 system that had no clear centre-forward in the lineup. Martin Ødegaard received a big start in a rather flexible role that let him drop deep as well as provide runs beyond the opposition’s defensive line. Emile Smith-Rowe had a floating role as well, often being the furthest man up front and pressing the backline in the defensive phase.

It was interesting to see the partnership of Pablo Marí and Rob Holding in the defensive line as well as the appearance of Dani Ceballos in midfield, which was a big issue for Arsenal.

The Gunners received width from Bukayo Saka and Nicolas Pépé and relied heavily on it but couldn’t do much for the entirety of the first 45 minutes of the game.

A big topic of discussion from Thursday night’s game has been Arsenal’s pressing. Arteta decided to apply an aggressive high press to stifle Villarreal’s build-up scheme but ended up getting burned almost immediately.

The Gunners were generally deployed in a 4-4-2 structure that turned into a 4-2-4 when pressing high with every player having a specific role to play in those tactics. Smith-Rowe was instructed to follow the ball-carrier, thus circulating both of the centre-backs and the goalkeeper, while the wide players, Saka and Pépé, covered the channels towards the full-backs.

Behind them, Ødegaard and Ceballos would follow Villarreal’s double pivot, sticking tightly to them in an attempt to stop the central progression. However, this setup allowed Villarreal enough freedom on the ball to manipulate and bypass the press.

Notice the setup in the image above. We see Smith-Rowe rushing the centre-back and the goalkeeper but Villarreal can easily bypass him. Both Parejo and Capoue have a marker on them but with dynamic superiority in movement in their favour, they always get to the ball first, even if it’s with back to goal.

But the biggest problem Arsenal faced in their pressing tactics was the positioning of the wingers. Saka and Pépé wouldn’t press the centre-backs in the first half but would rather retreat to keep the full-backs in their cover shadow. But this gave the Villarreal backline too much space and time on the ball, as can be seen in the first image above.

Gerónimo Rulli is only pressed by Smith-Rowe and he easily finds Parejo in the central corridor. Since Pépé is caught in no man’s land between the centre-back and the left-back – while also covering neither – Parejo easily threads the ball that starts the attack for 1-0. 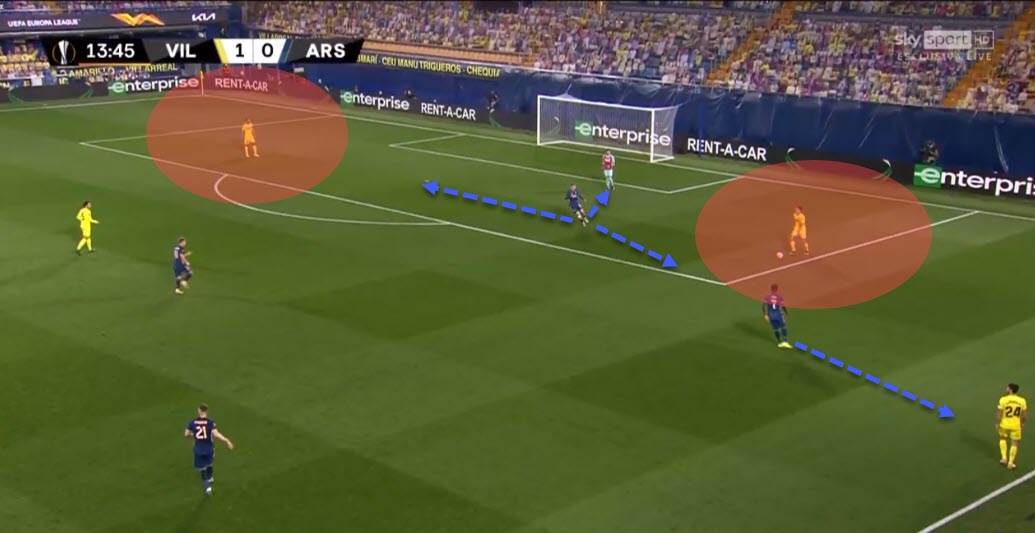 Here’s another example, this time starting with Pau Torres on the left. Again, Saka doesn’t press while Smith-Rowe struggles to cover three players in the backline. This gives the defender enough time and space to deploy one of his trademark long passes that switch the play towards the right side of the pitch.

These passes would mostly be aimed at the likes of Alcacer and Chukwueze, both of whom were positioned high up as outlets against Arsenal’s high press tactics. Isolating the young winger was especially dangerous due to his incredible dribbling abilities and pace.

We can see Alcacer’s and Chukwueze’s connections down below. Notice how alongside Moreno, they are the highest points in Villarreal’s attack and the defenders would often aim for them in the face of the press.

Chukwueze would give pace and width to their attacks while Alcacer stayed high even when Moreno dropped deep to link up with the midfield. This gave Villarreal an outlet to aim for and someone who can pin the backline or drag the defenders to create space elsewhere.

Our next example shows him doing exactly that through excellent off the ball movement while Trigueros deploys a pass towards the left wing that ultimately leads to Villarreal getting a goal-scoring corner kick. 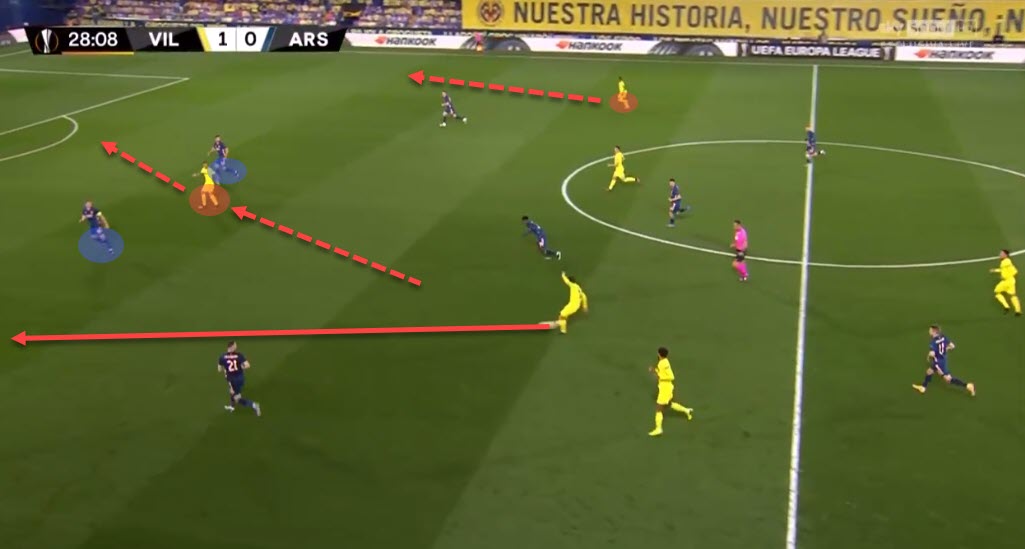 Villarreal were great at exploiting Arsenal’s mishaps in the first half of the game. However, they also managed to limit their opposition to long balls towards the flanks and aimless recycling of possession in the backline.

Below you can see two graphs – the one on the left is Arsenal’s general shape & passing on the night while the one to the right depicts their progressive passes. There are a couple of key things to note here. Firstly, their strongest connections were formed in the backline as the four defenders had the majority of possession and were passing to each other a lot, struggling to penetrate Villarreal’s defensive block.

Secondly, notice how progression was achieved largely through long balls towards their wingers. Pépé, for example, has received the most (7) and that is also how Arsenal got their first penalty call which was ultimately scrapped due to the young winger’s handball.

Still, these graphics show us that Villarreal were effective in nullifying Arsenal’s build-up tactics. They’ve done that through two main setups: the effective high press with good counter-pressing and interesting rotations in a settled defensive phase.

Let’s start with the former aspect: the high press. Generally speaking, Villarreal will deploy a 4-4-2 mid-block that gradually transitions into a 4-3-3 but against Arsenal, they tended to come out of their shape in a heavy man-marking scheme, as pictured below.

Moreno would track the ball-carrier while Alcacer and Chukwueze tried to mark the wide options. Behind them, Parejo sticks to Thomas Partey while Trigueros and Capoue deal with Arsenal’s dropping players who aim to create superiorities.

The Gunners weren’t quick enough to bypass the press, which stifled their progression greatly. But despite that tendency to press high, Villarreal were more impressive in their standardised 4-4-2 mid-block that showcased their defensive rotations.

As already explained briefly in this tactical analysis, that structure would change into a 4-3-3 when the wide players joined the first line to tackle the numerical inferiority. 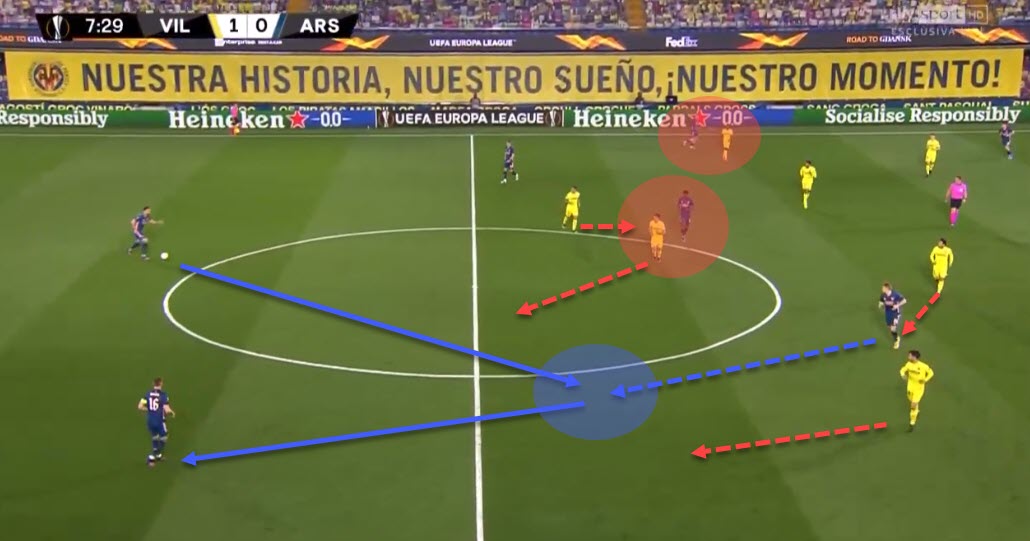 Let’s explore a very interesting sequence here. Arsenal are recycling the ball from left to right and through a dropping midfielder. We see Parejo is sticking to Ødegaard while Trigueros pushes up to complete the 4-3-3. On the other side, Moreno, who was keeping Partey in his cover shadow now leaves the player to Alcacer while he pushes up to put pressure on the ball-carrier.

Out wide, we also see Chukwueze tracking the full-back while Capoue roams between the lines in case Arsenal decide to drop another player deeper to assist the build-up phase. As the ball is recycled, Villarreal’s players rotate accordingly.

Trigueros jumps forward, Alcacer shifts wide and leaves Partey to Moreno again while Parejo has stuck to Ødegaard, forcing him to quickly send the ball to the backline instead of progressing with it forward. 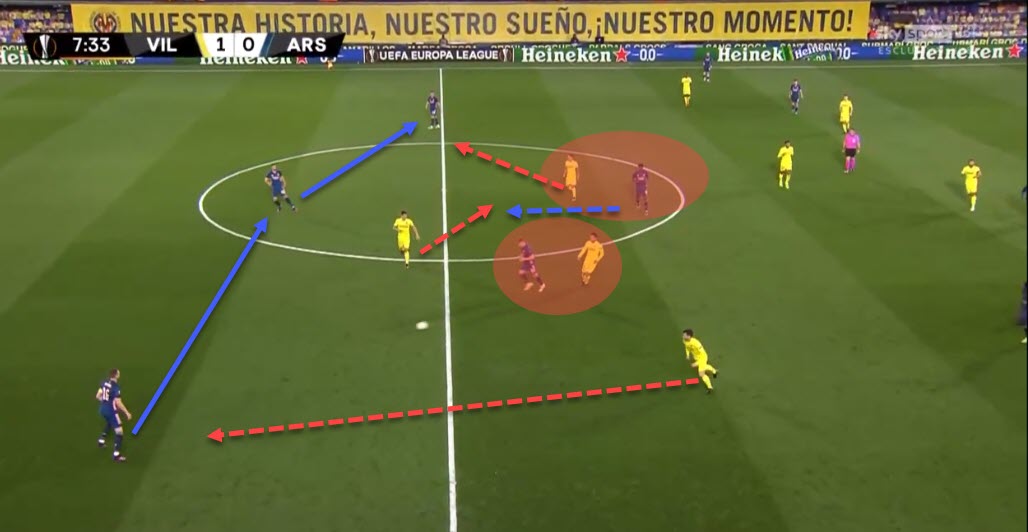 It’s important to note that this sequence ends in Arsenal going for yet another long ball towards the wingers and ultimately, it gets intercepted and Villarreal can reset for their attacking phase.

It’s a good sign for Arsenal that Arteta quickly recognised what was lacking in his tactics and fixed it. Emery, on the other hand, made some changes that almost cost him the game. From the very start of the second half, the Gunners’ pressing tactics were vastly improved.

To be completely fair, the structure itself remained mostly unchanged. Arsenal still pressed with Smith-Rowe leading the line, followed by a midfield duo behind him and the two wide players on the wings. The timing and the triggers, however, were different.

Now, Saka and Pépé apply pressure on the centre-backs and provide support to the lone striker. Behind them, pressure is also immediately applied to the full-backs who were constantly found by lofted balls from the goalkeeper in the first half. 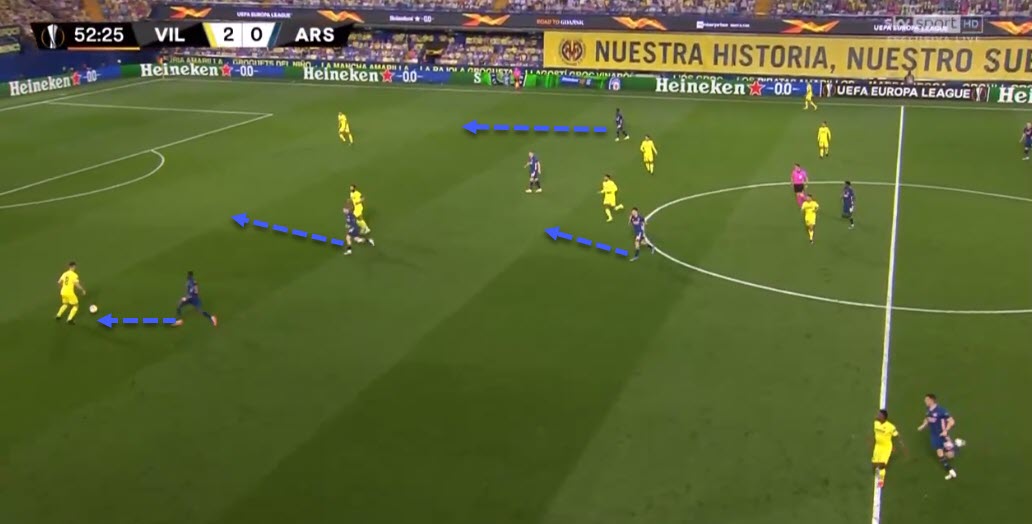 You can see the same 4-2-4 pressing scheme above and the pressure that is applied to the centre-backs, which wasn’t present in the first 45 minutes of the clash. Intriguingly, this is how Arsenal got into a very promising situation at the very start of the second half.

We can see that sequence unfold down below. Smith-Rowe on the ball-carrier and even though Saka is again caught between the centre-back and the full-back, this time he gets support from the deep and the ball gets intercepted. Due to his new role putting him higher up towards the box, he is in a great position to receive and immediately threaten Villarreal. 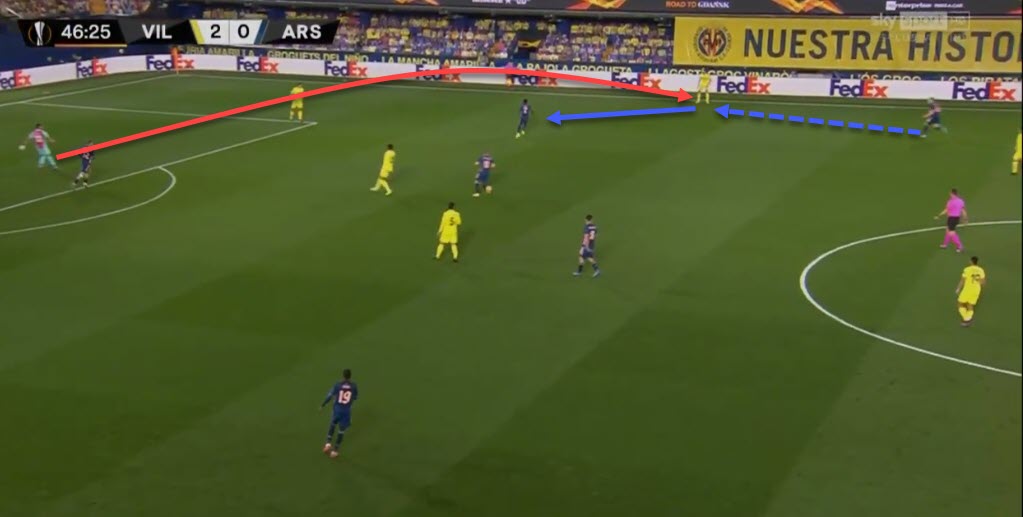 But Arsenal’s newfound success in their pressing scheme was also due to Emery’s decision to drop Alcacer for Francis Coquelin. Yes, that way he ensured the midfield was overloaded and the build-up phase had more support but he also removed a crucial outlet higher up the pitch, often leaving Chukwueze as the lone choice up top.

Moreno tends to drop deeper as well, linking up with the midfield, so that meant the only real way to expose Arsenal’s press was through Chukwueze’s pace on the right. Compare Alcacer’s pinning movement from the first half to Coquelin’s deep positioning in the following images. 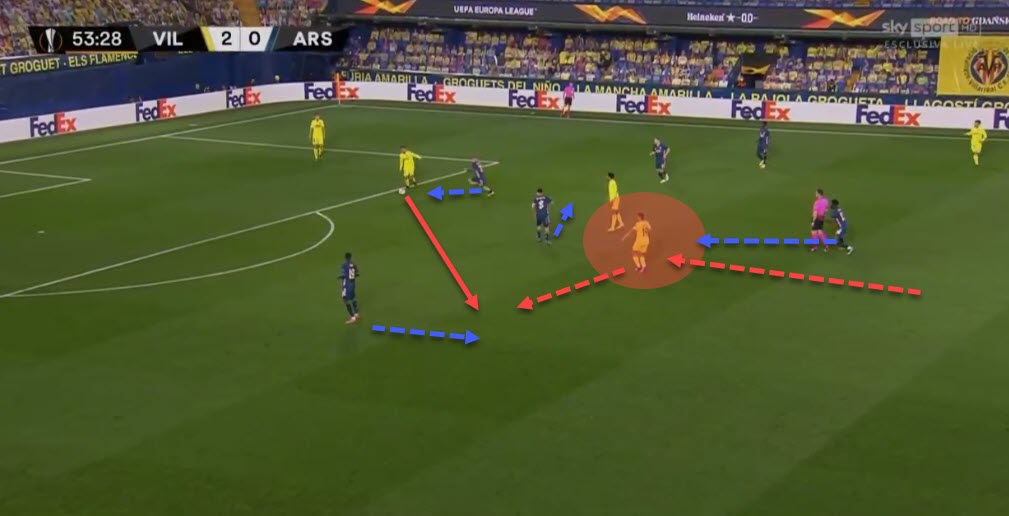 Here, he’s dropped into Villarreal’s half to assist progression and while it does serve a purpose, it ultimately limits how quick and effective they are in transitions and tearing through Arsenal’s structure.

When moving into the opposition’s territory, the same thing would happen as Coquelin assumed a deeper position than that of the player he replaced. And you can immediately see how Moreno and Chukwueze (off-screen) are left isolated. Of course, Moreno can perform Alcacer’s role too but a major strength of his player profile is also the ability to offer link-up and drag markers away. 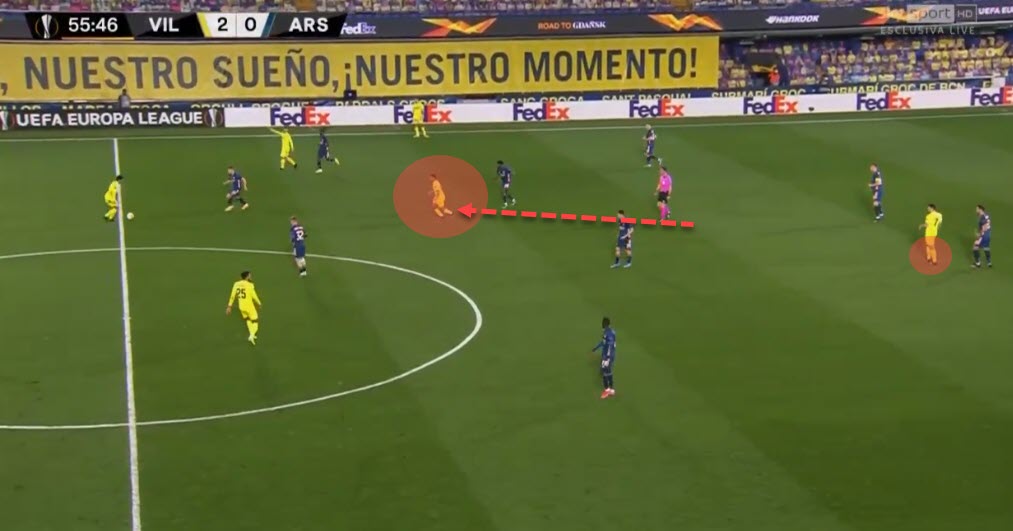 The new structure, however, was too pragmatic and defensive, surrendering control to Arsenal when it was supposed to suffocate them and finish the job.

Emery’s night went from almost perfect to almost disastrous but in the end, they still head to London with a 2-1 lead. However, the away goal might be crucial in Arsenal’s chase of the Europa League final, the one thing that has eluded Villarreal for years now. As things currently stand, they just might meet Manchester United there if everything goes according to plan and the Red Devils also finish the job against Serie A representatives Roma.

Hopefully, this tactical analysis has provided enough insight to show you the key talking points from this entertaining tie. We’ll be back here next week so stay tuned.