The first leg of the Europa League semifinals will be played on Thursday night. Two Premier League contestants Manchester United and Arsenal will face Serie A side Roma and La Liga side Villarreal respectively.

This preview will show us potential line-ups for those matches and a data analysis comparing these teams in the competition so far.

First, we will show predicted line-ups and data for the Manchester United – Roma tie.  These two teams have some history in Europe, playing against each other in the Champions League on a couple of occasions, and it is hard to forget United’s memorable 7-1 win over their Italian opponents at Old Trafford in the 2006-07 Champions League. Below we can see the potential line-ups for both sides for the first leg. 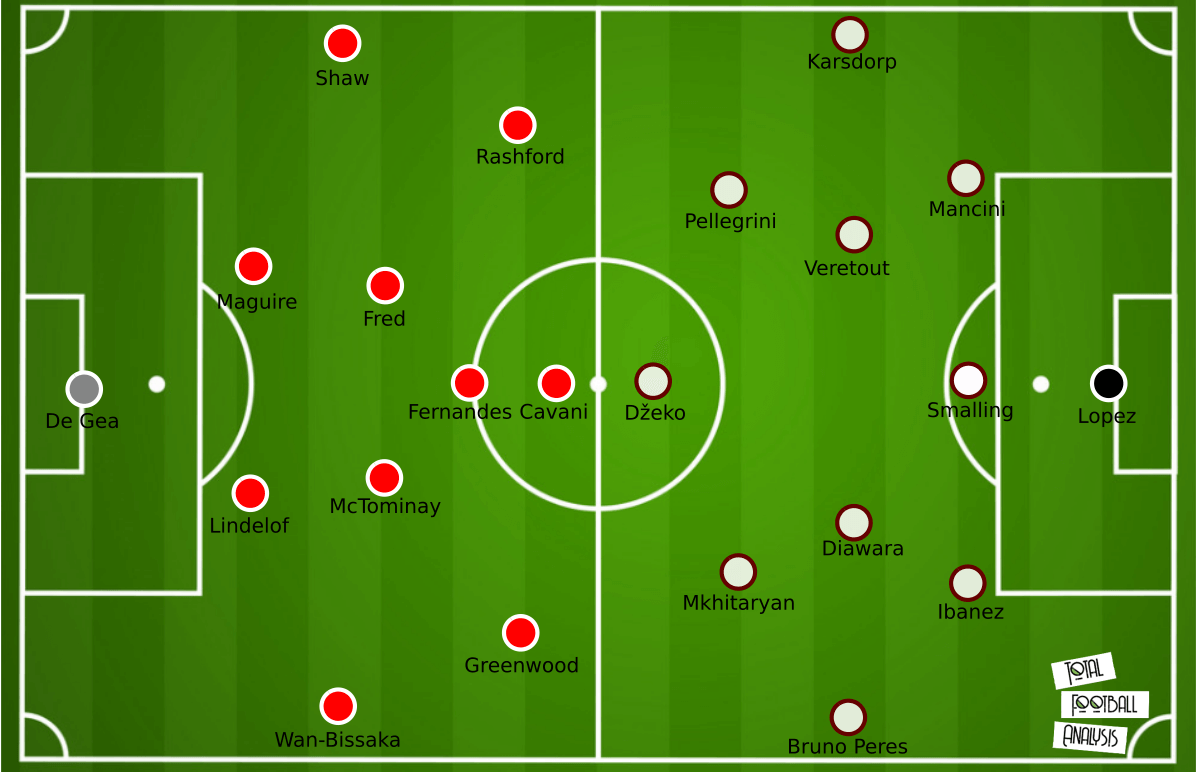 Manchester United will start with their usual 4-2-3-1 formation. David de Gea will probably start in goal, as Ole Gunnar Solskjaer seems to have clearly made Dean Henderson his number one goalkeeper, with De Gea starting in the cup competitions. United’s first-choice centre-backs, Harry Maguire and Victor Lindelof will start, along with Aaron Wan-Bissaka at right-back and Luke Shaw on the opposite flank.

Solskjaer usually uses a midfield pivot of Scott McTominay and Fred in big games, and this is unlikely to change for this match, particularly as Paul Pogba is currently observing the Ramadan fast and therefore will probably not be ready to play from the start. Bruno Fernandes has been ever-present for the Red Devils and will continue as the number 10, with Marcus Rashford and Mason Greenwood flanking Edinson Cavani up front. One possible tweak, if Pogba is able to start, could see the Frenchman play on the left, where he has done well in recent matches, with Rashford shifting to the right and Greenwood moving up front.

Roma, on the other hand, will line up in their preferred 3-4-2-1 shape. Paul Lopez will be in goal, behind a centre-back trio of Gianluca Mancini, Roger Ibanez and former United defender Chris Smalling. Smalling has endured an injury-hit campaign this season, but returned to the lineup last week, and he is an integral part of Roma’s defensive prospects in this match. However, if he does suffer a setback and is unable to feature, we expect that Bryan Cristante will slot into his slot, where he has played recently despite being a midfielder. Rick Karsdorp and Bruno Peres could be the starting wing-backs, but like Smalling, Leonardo Spinazzola also returned from injury last weekend, so he could come in on the left for this match. Jordan Veretout, who has scored 10 goals already from midfield this season, is expected to partner Amadou Diawara in the centre of the pitch, while captain Lorenzo Pellegrini will be joined by another United old boy in Henrikh Mkhitaryan as the two number 10s, behind Edin Dzeko. Dzeko has a good record against United, having scored seven goals in nine appearances during his time at Manchester City, and will be motivated to do well against a former derby rival. 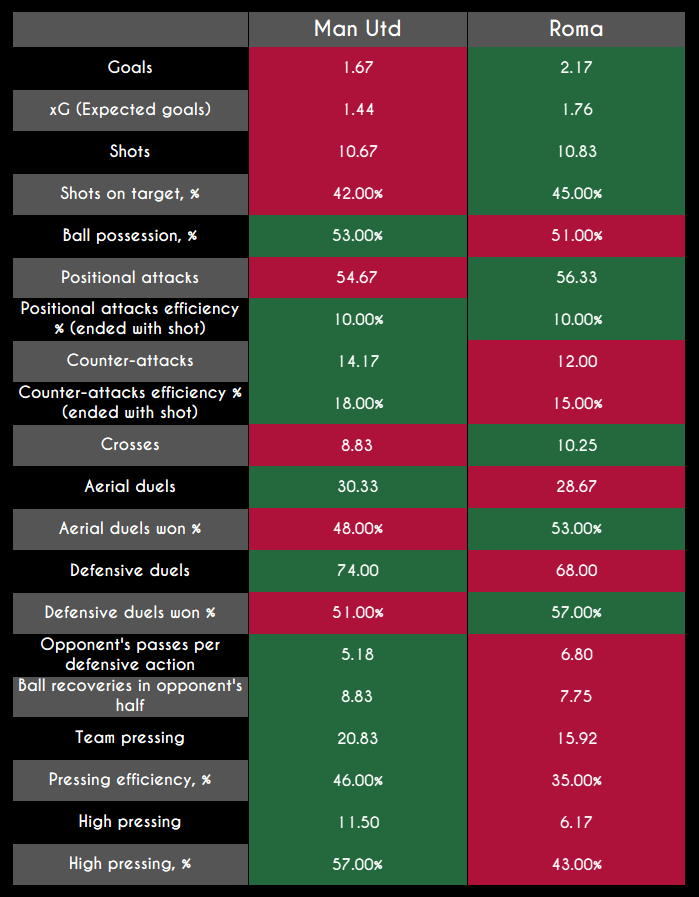 On this highlights table, we can see a team comparison across different areas and metrics based on their performances so far in the Europa League.  It is important to note that Manchester United joined the competition in the knockout phase after dropping down from the Champions League, while Roma played through the group stage.

When it comes to goals we can see that Roma have scored more goals and had a higher xG per match while both teams have had a similar number of shots per match. Manchester United have averaged a slightly higher possession share in their matches, on average, with 53% compared to Roma’s 51%. Roma have performed well in aerial and defensive duels so far which is an encouraging sign ahead of facing a dangerous side.

We can see that Manchester United’s numbers indicate that they like to press and don’t allow opponents too many passes before trying to regain possession. They have attempted almost twice as many high pressing actions per match as Roma and it will be interesting to see how this will work against Roma’s formation with the three at the back. The key for Roma is to be cautious in their own half when in possession and try to find Mkhitaryan and Pellegrini in the half-spaces to try and create a numerical overload against United’s midfield pivot.

These two teams also have some illustrious history in Europe – their last meeting was in the quarter-finals of the 2008/09 Champions League where Arsenal won 4-1 on aggregate. Of course, there is an additional layer of intrigue for this tie, given that Villarreal’s head coach is none other than Unai Emery, Mikel Arteta’s predecessor as Arsenal manager. Emery has won this tournament three times in a row with Sevilla in the not-too-distant past, and the Spaniard will definitely be wanting to get one over his former side, no matter how polite and composed he is in public. 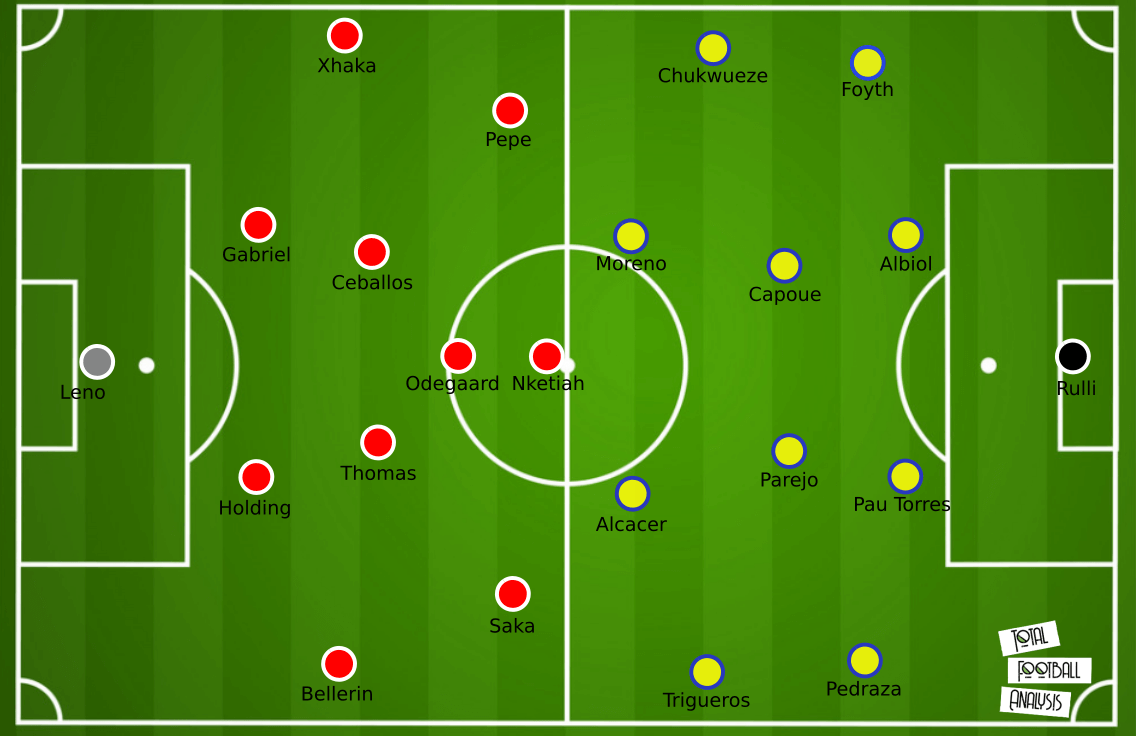 Emery will start his team in a 4-4-2 formation that can shift to a 4-3-3 on occasion since Manu Trigueros is a central midfielder playing out wide, while Gerard Moreno often drifts into the flanks. Geronimo Rulli will start as the goalkeeper, with the excellent centre-back duo of Raul Albiol and Pau Torres in front of him. Alfonzo Pedraza and Tottenham loanee Juan Foyth are the likely full-backs.

Dani Parejo and Etienne Capoue will form a very experienced and talented midfield, with the two players’ skills complementing each other. Samuel Chukwueze is expected to start on the flanks along with Trigueros, who will be a lot more central, while Chukwueze will stretch the play by staying wide on the opposite flank. Moreno, who is third on the La Liga goalscoring charts, will be partnered by Paco Alcacer up front. The only absentee for the Yellow Submarines is Vicente Iborra, who has a long-term injury.

Mikel Arteta’s luck is much worse, as he will definitely be without Alexandre Lacazette, Kieran Tierney and David Luiz, while captain Pierre Emerick-Aubameyang could also miss out. Bernd Leno is expected to be retained as the goalkeeper despite an awful mistake against Everton at the weekend which led to the only goal in a 1-0 defeat. Rob Holding and Gabriel have been the regular defensive duo in Luiz’s absence, and should continue, while we may see a recall for Hector Bellerin at right-back, despite Calum Chambers’ encouraging form in recent matches. Of course, Arsenal do not have any natural left-backs available to them due to Tierney’s absence, and while Granit Xhaka has deputised to good effect in recent matches, this will definitely be an area targeted by Villarreal, especially through Chukwueze’s pace against the Swiss midfielder.

Thomas Partey and Dani Ceballos will start in midfield and we can expect Martin Odegaard to play as the number 10, given that he returned from injury in the last match. Bukayo Saka and Nicolas Pepe will be the wingers, while Eddie Nketiah is the only available striker in Lacazette and Aubameyang’s absence. The comparison above will allow us to have a quick analysis of how these two teams stack up against each other. Both teams have outperformed their xG totals thus far, which is a sign of some excellent finishing, but could also mean that luck has been on their side and that this may not be sustainable. Arsenal have attempted more shots, but Villarreal have been more accurate at hitting the target. Both teams prefer to play with a possession-based style, so it will be interesting to see which of these two manages to take control of the game. When it comes to counter-attacking statistics, 22% of Arsenal counter-attacks have ended in a shot on goal, and with players like Saka and Pepe in the XI, it may not be such a bad idea to play on the break in this match.

Arsenal press relatively high and recover the ball quite often in the opposition half, and this could be an effective strategy, combined with a solid defensive shape, against their opponents.

Thursday night will bring us two very high-quality matches and it is difficult to predict who will go through. Manchester United have a better squad than Roma and with the first leg at home, they can put together a significant advantage, while Arsenal could be better served by letting Villarreal have the ball in their match. We could very well be in for an all-English final this season, but both United and Arsenal will first have to overcome quality opponents to get to the final in Gdansk.