Missed opportunity: How Tuchel’s Chelsea should have finished Real in Madrid – tactical analysis

On Tuesday evening, the first of the 2020/21 UEFA Champions League semi-finals between Real Madrid and Chelsea. It was eventually a draw although Chelsea arguably deserved the victory. This tactical analysis will take a deep dive into the tactics of both sides, and how it ended up as a draw. We will run through three key talking points, complete an analysis of what led this to become a draw, and who heads into the second leg as the favourite. 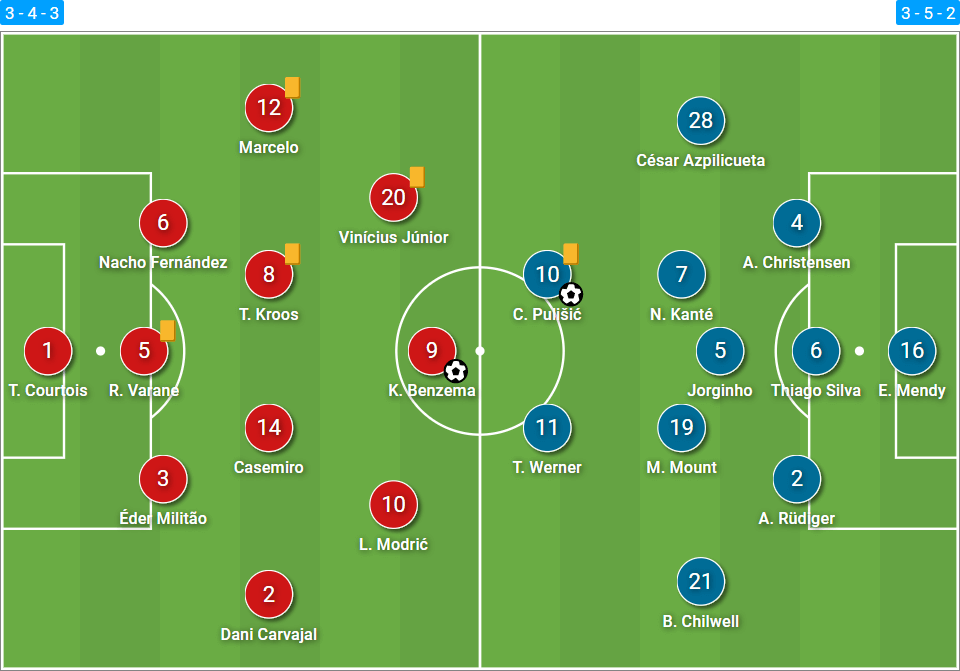 Real Madrid had a handful of key players out for this game, most noticeably El Capitan Sergio Ramos. Federico Valverde has caught coronavirus, while Ferland Mendy and Lucas Vázquez each have their own respective leg injuries. Notably, Zinedine Zidane matched Thomas Tuchel’s back three, partly due to tactical reasons, partly due to lack of full-back options.

Tuchel again only had one injury concern to tend to, which was that of Mateo Kovačić, who did not travel with the squad. The former Real Madrid man was also out of the last tie against Porto, in a game in which they lost 1-0. Tuchel has mixed around with his front three since his arrival, but today he started with two up top instead.

It is fair to say that Chelsea began this game with utter attacking intent. What started as a 3-5-2 evolved into a 3-4-3, with Mount on the left and Pulisic on the right, both exploiting the gaps in the half-space left by Madrid’s back three. In Spain, they call it a ‘back four with an elbow’, and the idea in this game was to allow Marcelo to roam forward by positioning Carvajal on the other side deeper.

Neither of Chelsea’s midfielders in this game were hitting defence-splitting through balls to find the runs of Mount or Pulisic down the half-space, instead, the back three assumed this role. Rüdiger was the most dominant of the three defenders in this regard. 75 touches, six accurate long balls, and two successful dribbles made for an exemplary display as he kickstarted many of Chelsea’s attacks. 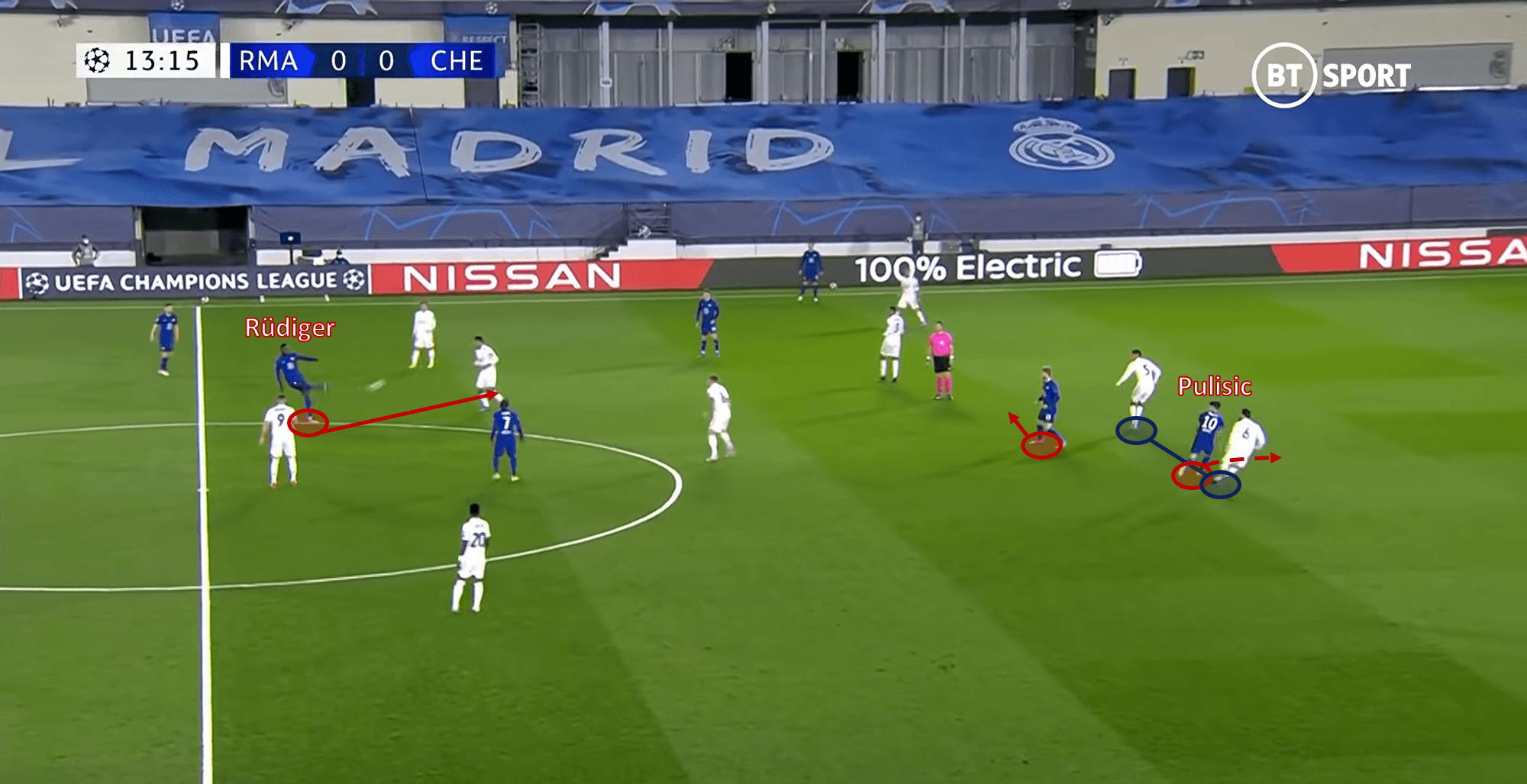 Here we see one of Rüdiger’s successful long balls. He spots Pulisic’s run and finds his man with the lofted through ball. 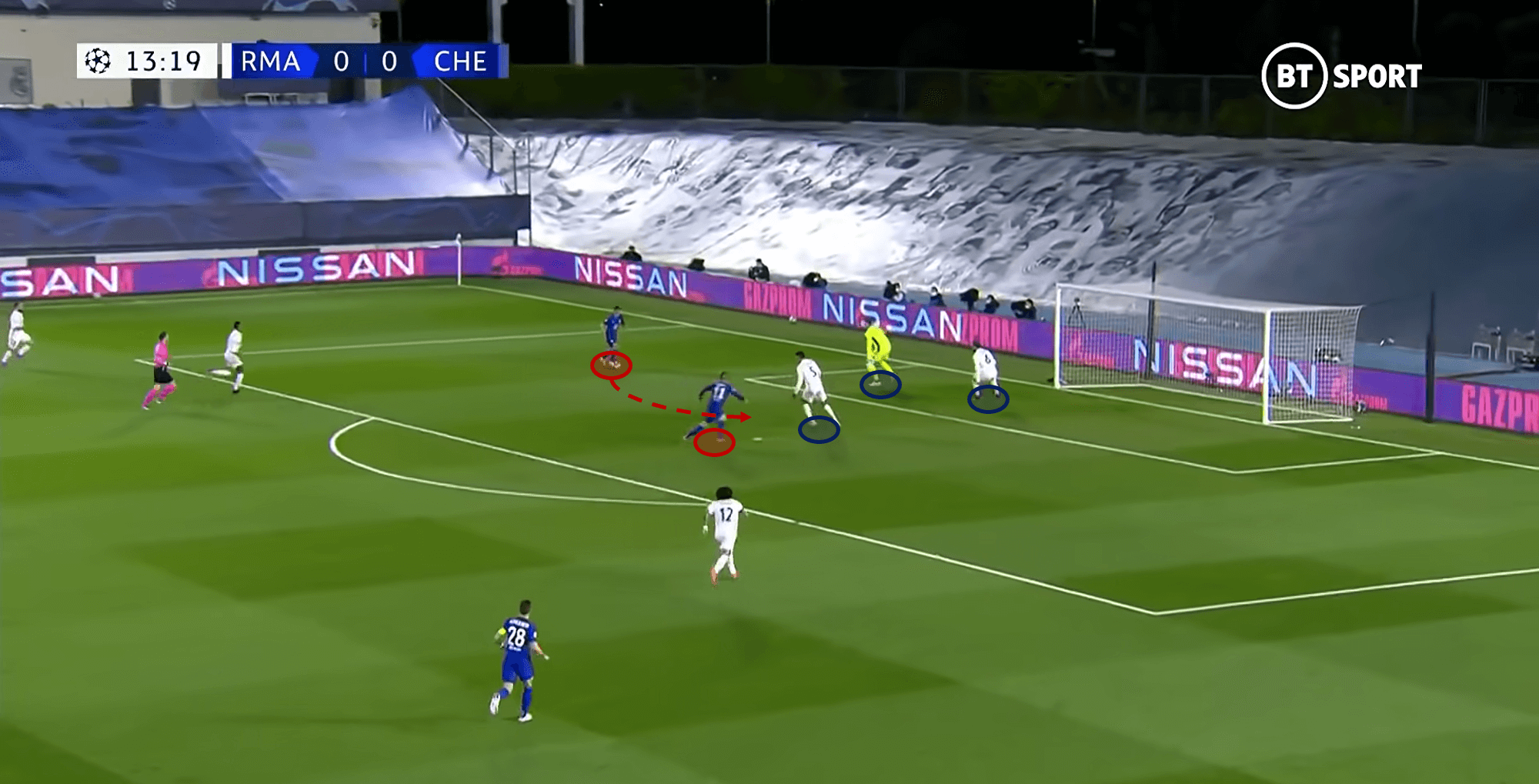 This allows Pulisic, with Werner in support, to run around Courtois and calmly finish into the net past a few defenders.

Chelsea’s defenders were clever with their time on the ball, sitting with it at their feet until the right moments where Madrid’s team had shifted to one side, before dispersing the ball to the other side. This broke the lines of press and gave Kanté the time and space to run into the final third and release either Pulisic or Mount.

Kanté here positions himself beyond the two Madrid men, Marcelo and Modrić, to receive the ball. 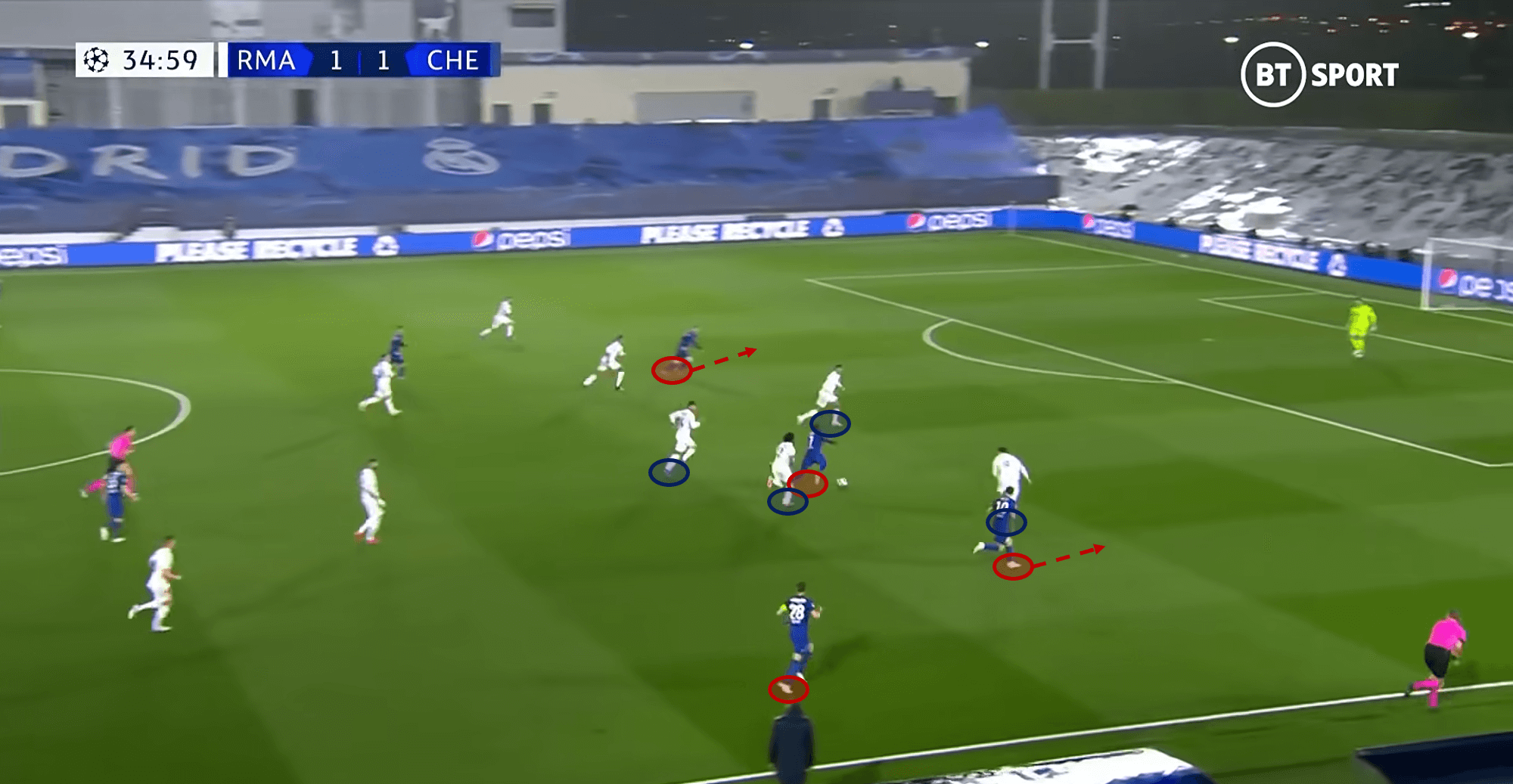 The Frenchman carries the ball up the pitch, leaving the Madrid defenders backline in the process, with runners on either side to find.

Once the ball got into the final third, Chelsea were unbelievably direct. Both Mount and Pulisic were taking on their opponents in a 1v1 on a more consistent basis than we are traditionally used to. Tuchel noted the one thing Madrid lack at the moment: pace and energy. He took advantage of this. Mount and Pulisic got into dangerous areas to create as a result. 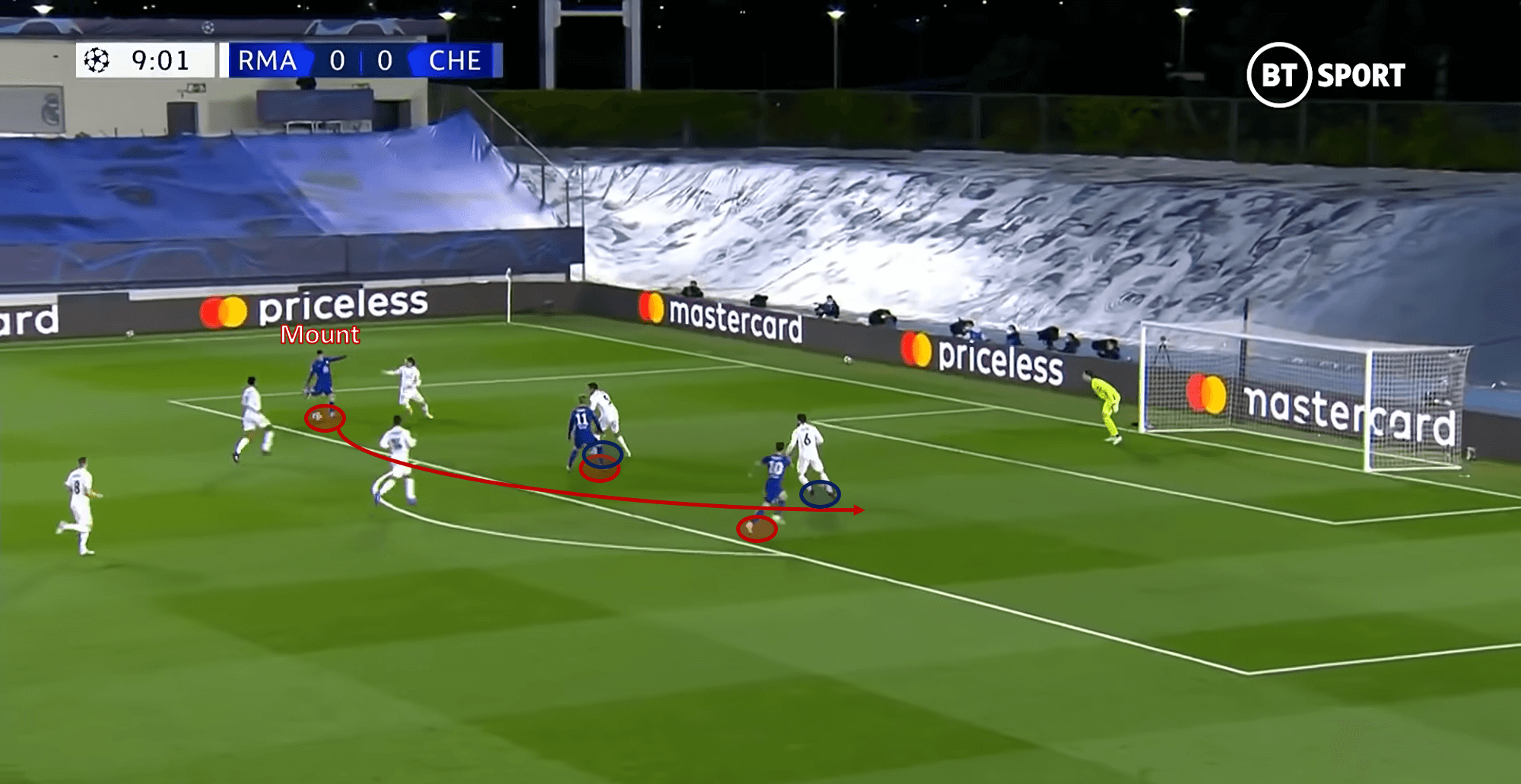 Mount here in a dangerous position has a couple of options for a pass.

Again though, it was the finishing that ultimately let Chelsea down. An underrated side to Werner’s game is his movement off the ball. He constantly stretches the opposition’s defensive structure and puts himself in the right spots to grab a goal. Unfortunately, he missed yet another high-value opportunity inside the six-yard box and never truly recovered.

In a rare occurrence, Zidane lined up his men in a 3-5-2, which has only happened on a couple of occasions this season, although they did win both those fixtures. In this game, the midfield three featured the stalwarts of this Madrid side by this point: Casemiro, Kroos, and Modrić, but the balance was altered in a formation that was not a 4-3-3.

In this game, Kroos played much deeper than a #8, and by average positions, operated lower down the pitch than defensive midfielder Casemiro. It is hard to gather if this was for tactical reasons, or if Kroos just can’t provide the energy necessary to operate as a #8. Kroos did what he prefers to do, drop deep to collect the ball and find runners or combine with Modrić in midfield. 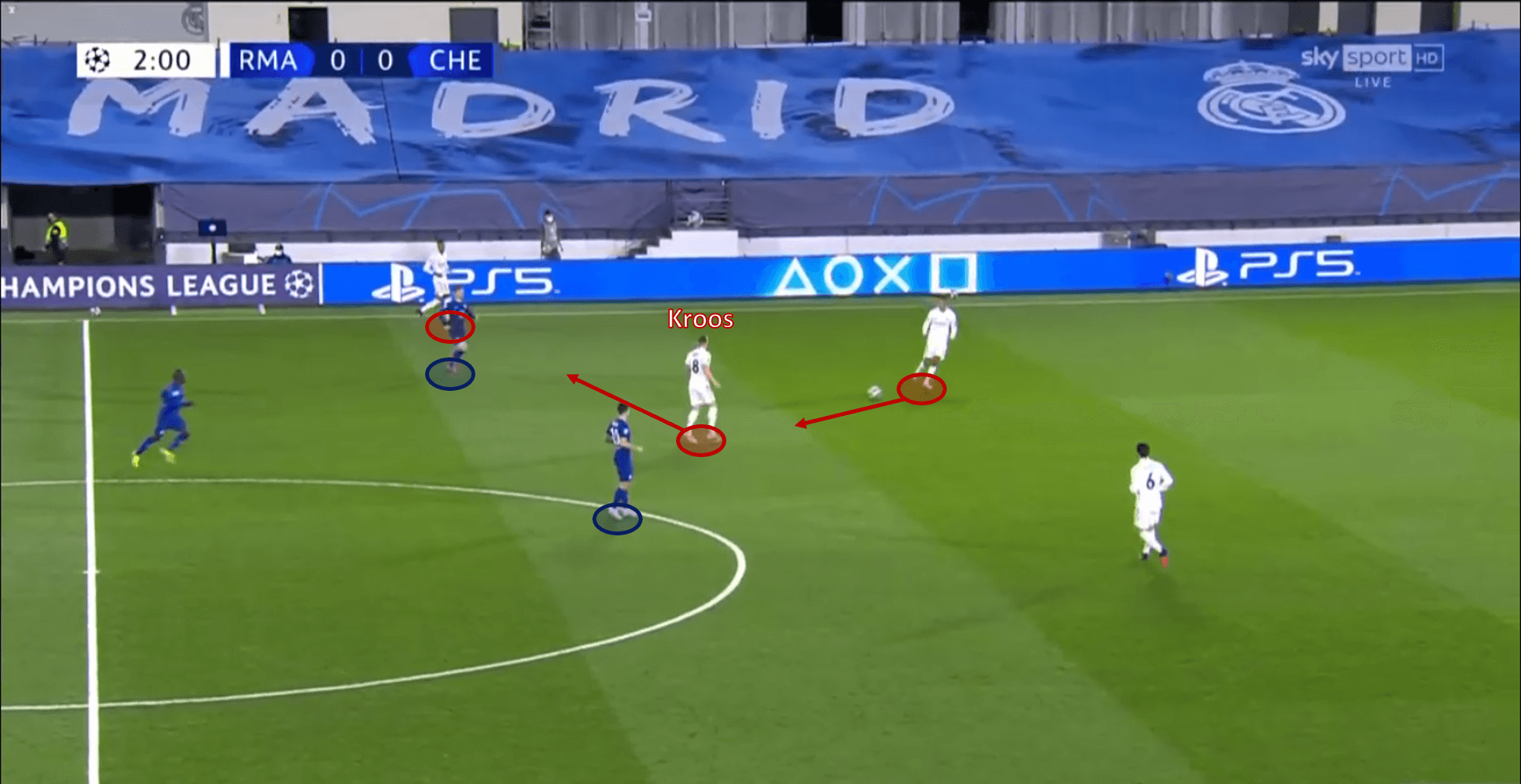 This was where Kroos played a large portion of this game. Inside his own half, rotating the ball across the field.

The problem, however, was that Kroos was getting constantly overrun by Kanté in that area of the pitch, pushing him back even further and limiting his impact on the game. Casemiro moving into the gaps that Kroos was leaving often meant that Chelsea had large areas beyond the midfield to roam into and run at the Madrid defence from, creating goalscoring opportunities in the process. 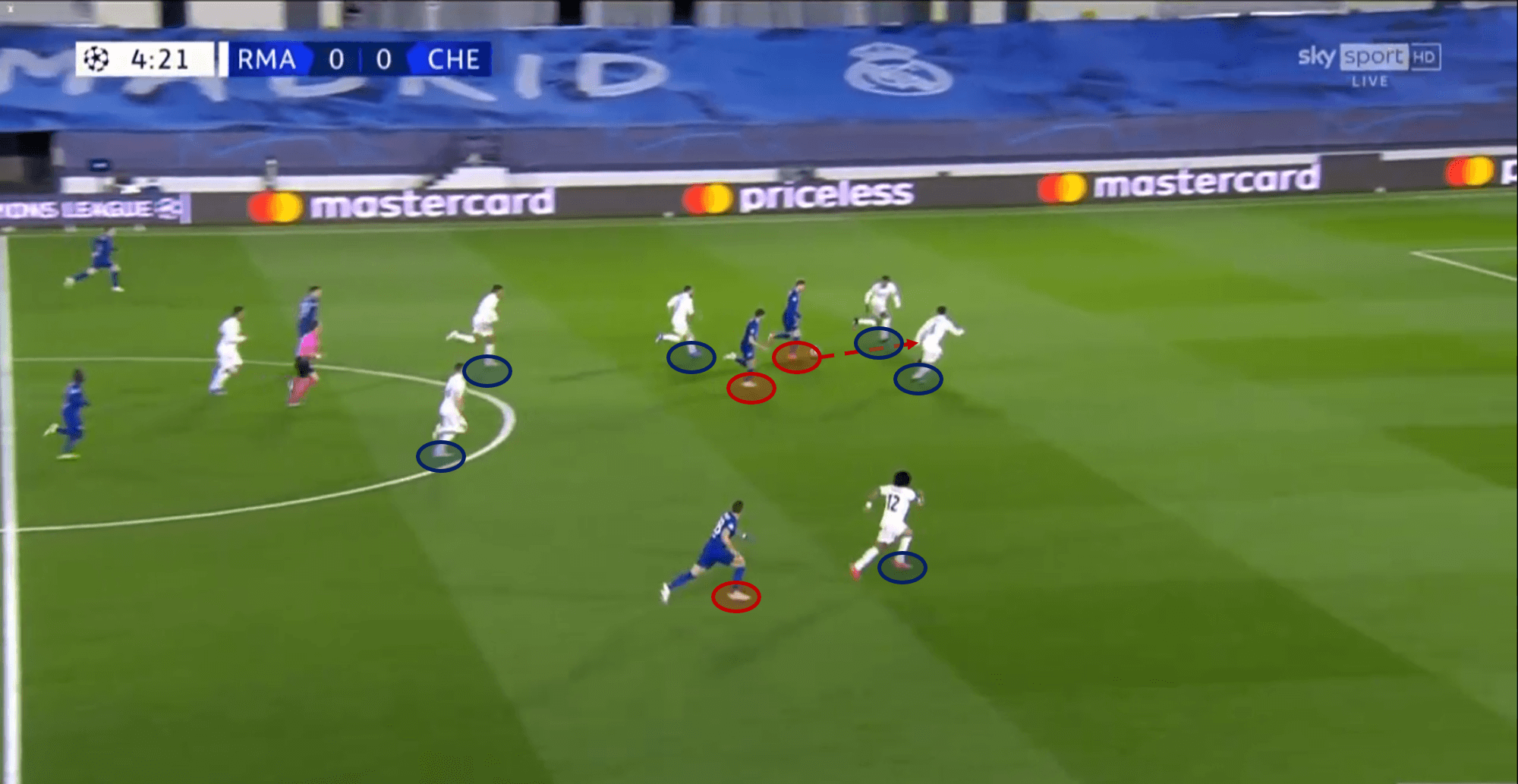 Notice how the Madrid men were sprinting back after being beaten in midfield.

It was a big reason why Kanté was awarded man of the match at the end of the game. Six dribbles, 17 ground duels, and two key passes do not even go to show his biggest and most beneficial asset in this game, which was his energy. He harried Kroos out of the game, severely limited the German’s ability to orchestrate the game for Madrid.

Chelsea fundamentally disjointed Madrid’s midfield from its attack, leaving them severely reliant on some individual brilliance from either of the two forwards. At any given moment, Madrid only really had two players in the final third whenever they had the ball in dangerous areas. This forced Madrid to shots from outside the area. 56% of their efforts were outside the area. 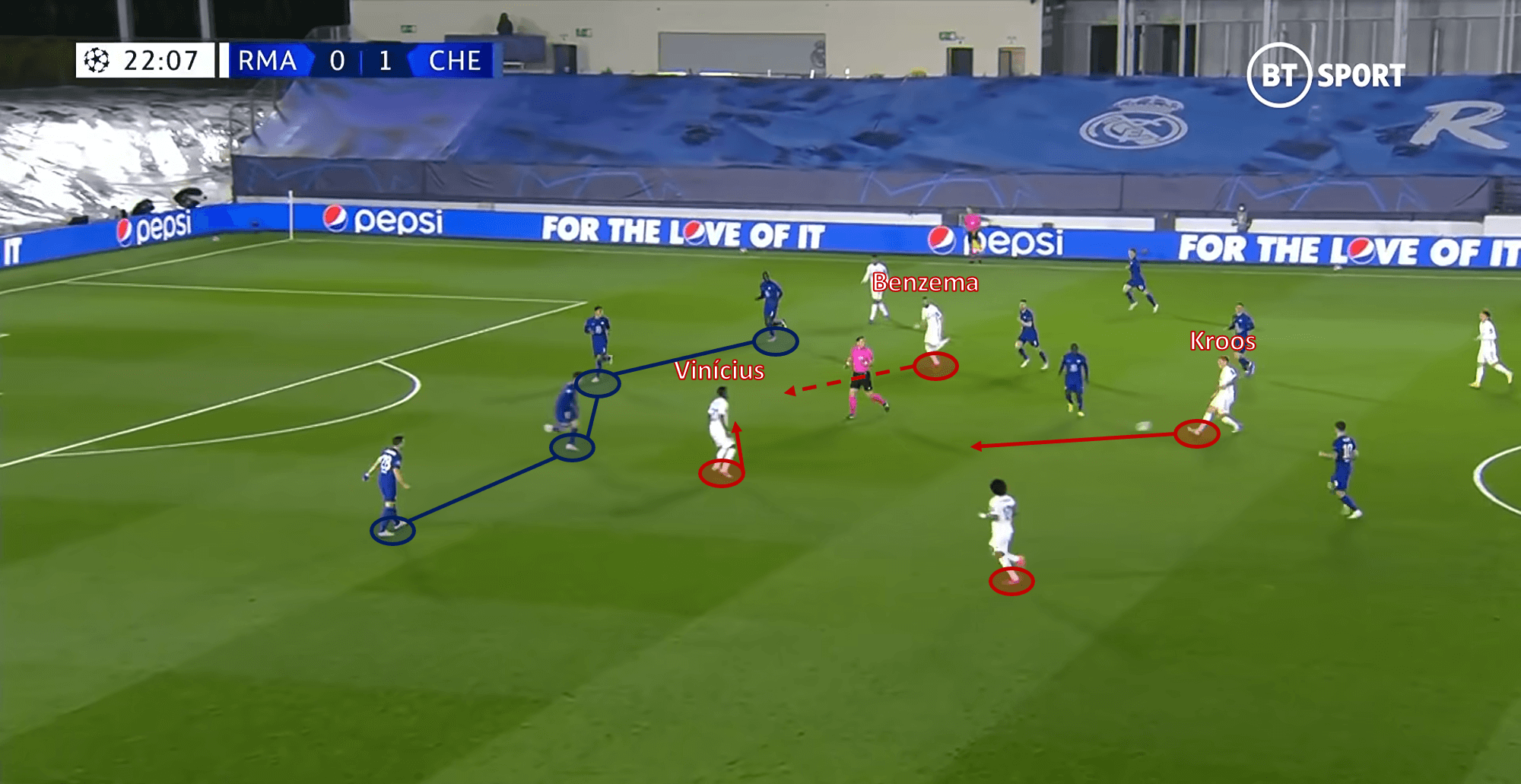 In one of the moments where Kroos entrenched into Chelsea’s defensive third, he plays the ball into Vinícius’s feet, with Benzema moving to receive the ball already. 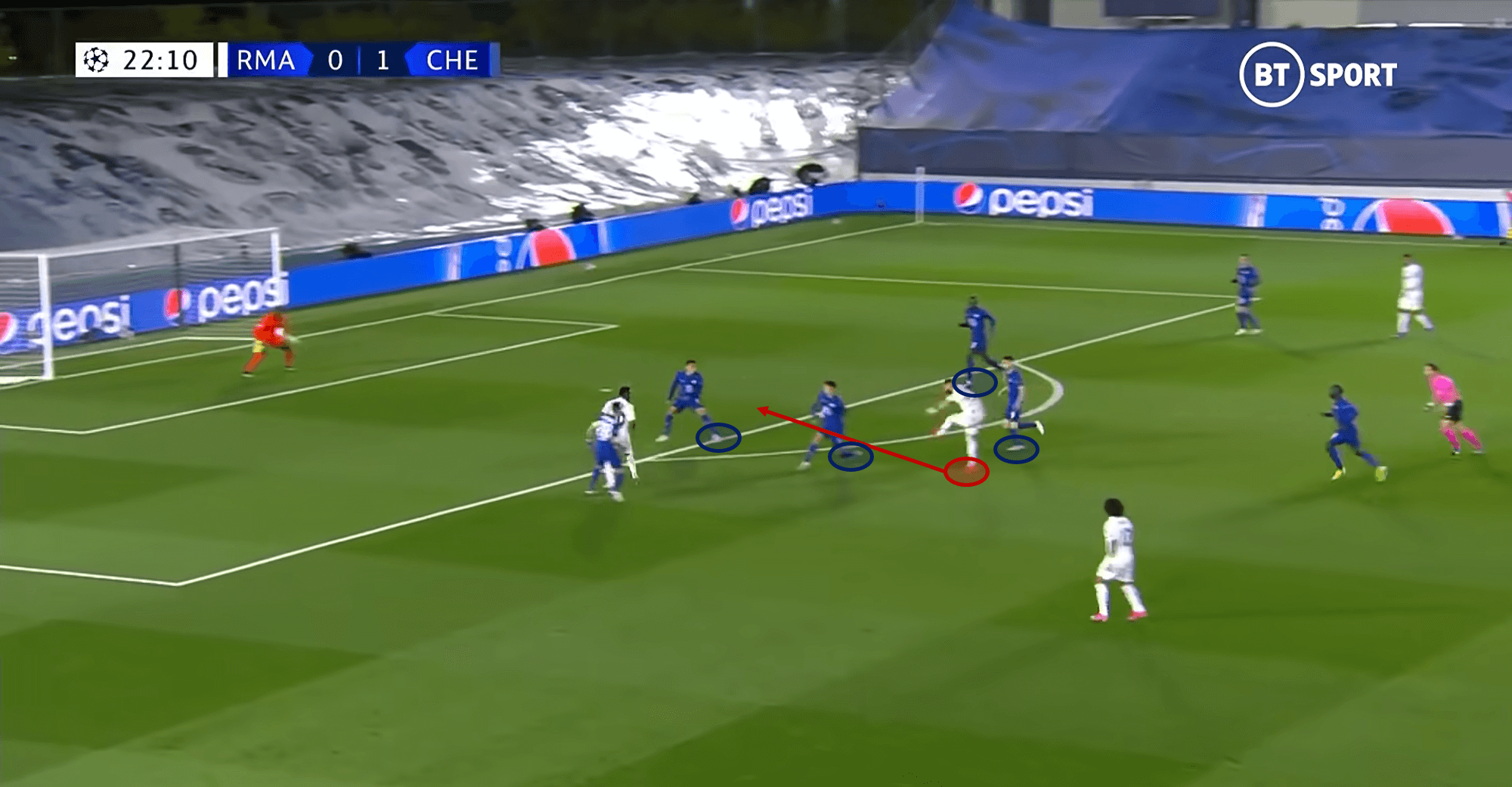 With defenders all around him, Benzema was limited to taking a long shot from outside the area, which hits the outside of the post.

Zidane ultimately played a risky game by matching Tuchel’s formation. Chelsea, till this point, are more comfortable playing a back three than Madrid. Not even just under Tuchel, this Chelsea squad utilised a back three in big games under Lampard, and some of the longstanding members of the squad will remember Conte’s back three system as recently as 2018.

Madrid under Zidane on the other hand have experimented much more this season, with the coach showing much more adaptability than we are used to seeing. Regardless, this squad’s experience with a back three dwarfs in comparison. It showed in the match. While Chelsea’s wing-backs were marauding up and down the wing, Madrid’s plan was less clear, especially down the left flank with Marcelo. 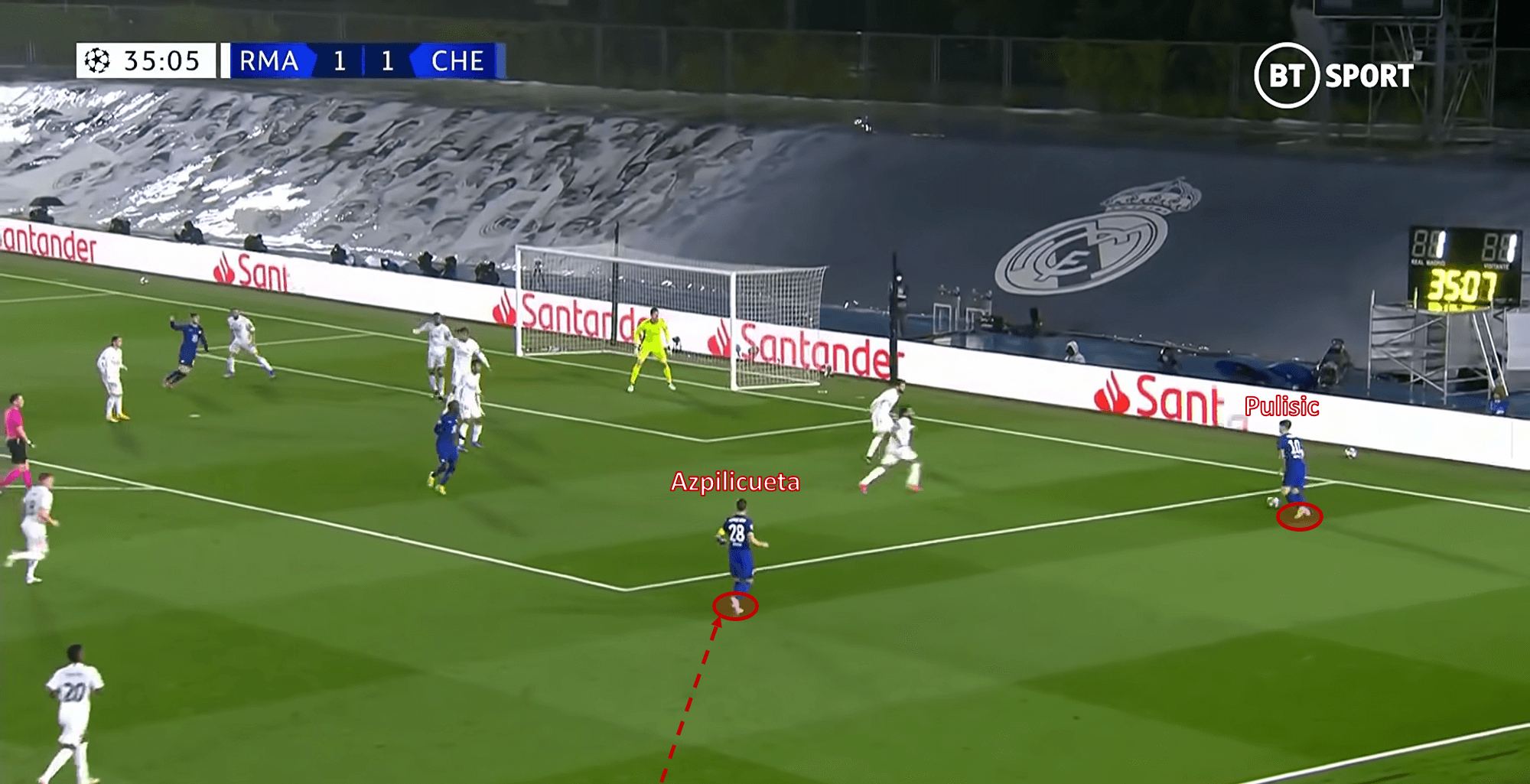 Azpilicueta here moves very high up the flank to support Pulisic in a wide zone. 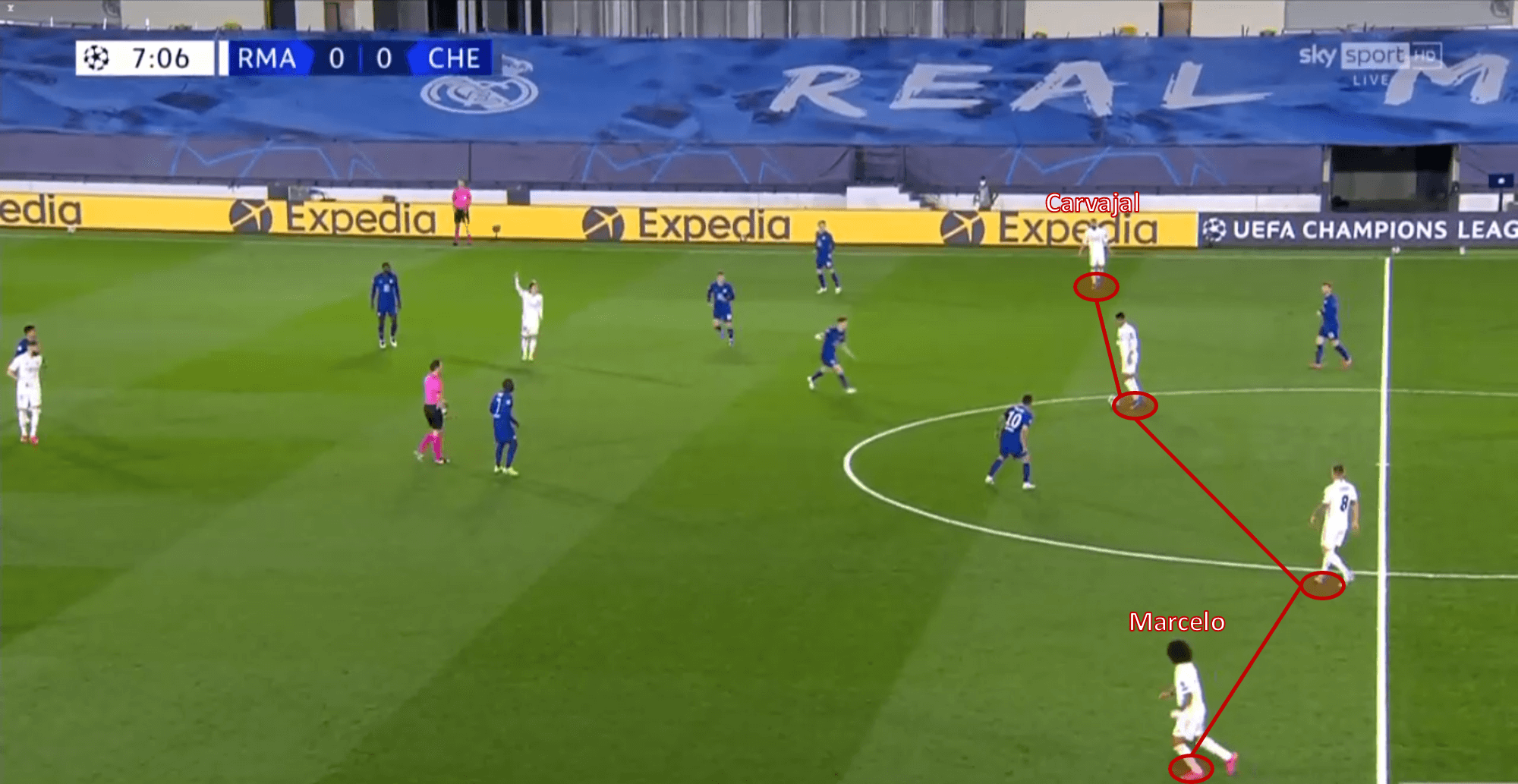 Even during periods of possession, Madrid’s wing-backs were not high enough up the pitch to aid ball progression.

With three central defenders, Nacho and Militão as the outside centre-backs pressed higher than Varane in the heart of the defence where he could cover if they lost out on a 1v1. The problem was that this happened an awful lot during the match. In fairness, this mainly happened in the first half, as Militão particularly grew into the game. 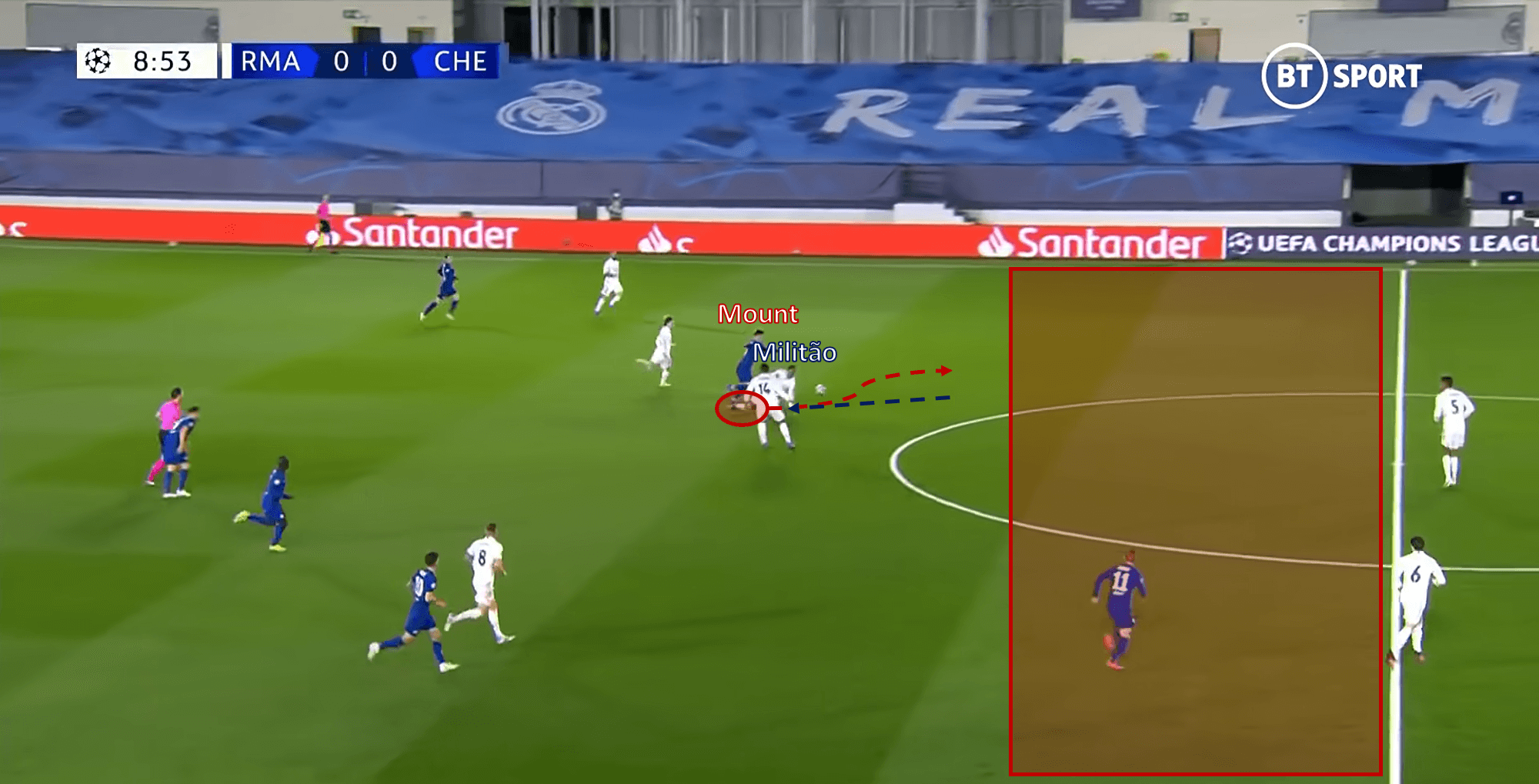 Militão steps out the defensive line to press Mount, but the Englishman flicks past the Brazilian.

Although Mount moved to the left of Werner when Chelsea had possession, it was still more of a central role than anything. When he carried the ball into the final third, he had the two wing-backs, Azpilicueta and Chilwell to find with a through pass, who could drill the ball across the face of goal to switch the play and drag Madrid from one side to another.

Notably, as Chelsea manipulated the ball, it was the wing-backs who were making runs beyond the defence in central areas. A moment like this happened in the first half with Azpilicueta making movements high up the right flank, causing Marcelo to drop deeper to track him, creating space between the wing-back and centre-back to exploit for the Spaniard. 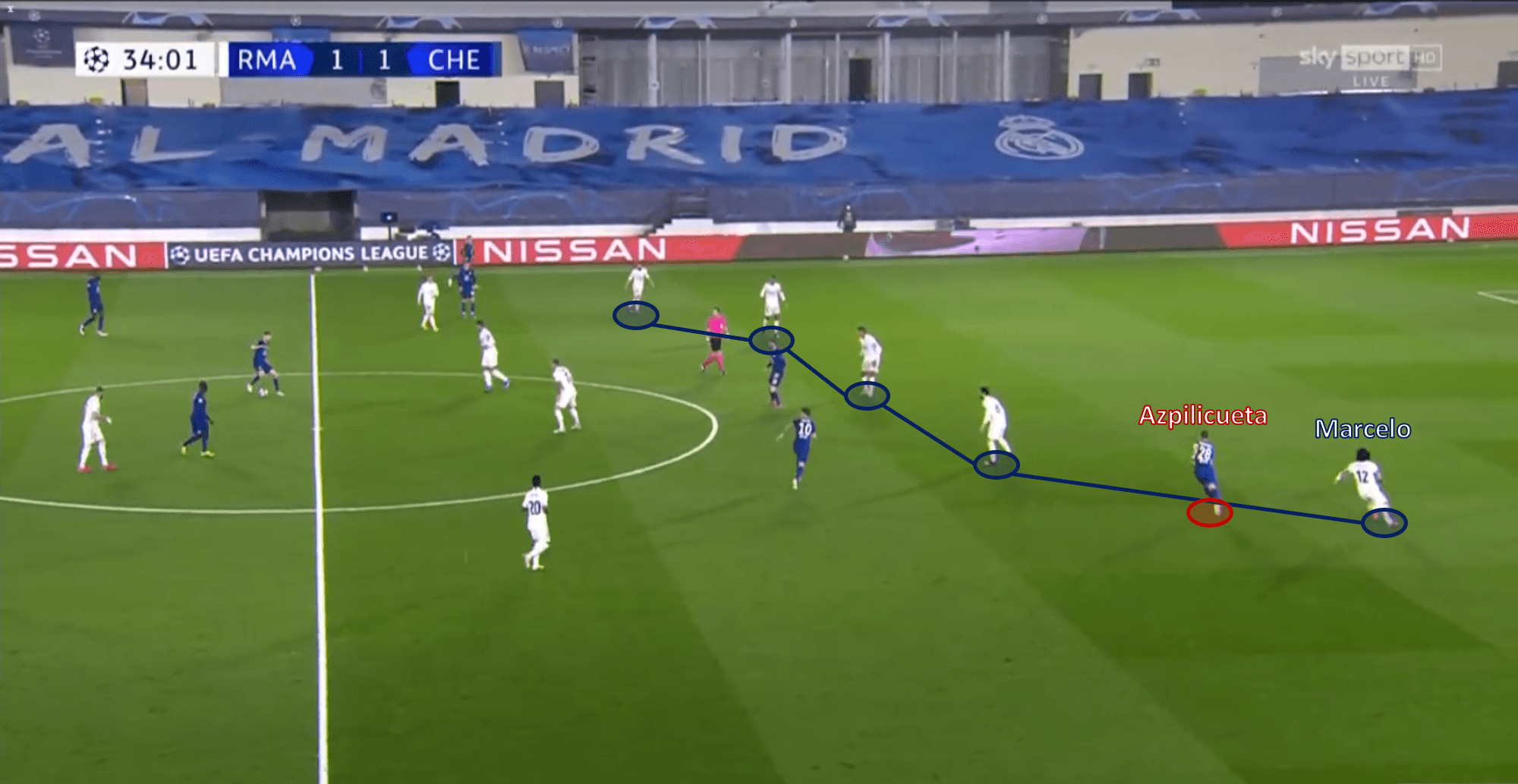 Azpilicueta drags Marcelo much deeper out of position and so far away from the closest centre-back.

If it were for better finishing, Chelsea could have scored at least two goals in this game, putting the second leg heavily in their favour. Tuchel’s men racked up an xG of 1.6 to Madrid’s 0.6 which backs up that statement. Instead, they head into a second leg where key Madrid players return from injury, looking for vengeance in a competition they had fiercely dominated only until a couple of seasons prior. It is looking like the last hurrah for some members of this Madrid team, and one can only imagine they will be looking to make it a memorable one. It’s either Man City or PSG in the final waiting for them.