Inter are enjoying an impressive resurgence in Italian football, currently sitting top of Serie A, holding an 8-point lead over 2nd place Milan with a game hand in hand. A lot of their success is down to their attacking prowess, with Romelu Lukaku netting 20 goals so far in Serie A. As a result, the Belgian striker has been linked with a transfer to another club in Europe, which would leave a huge gap in the Inter front line. Should Lukaku leave the club, they will likely be in the market for a replacement to partner Lautaro Martinez. This data analysis will look to identify potential targets for the Italian giants, comparing the 2020/21 Serie A stats of eight strikers who have impressed this season.

To be included in this report, players must be 30 years of age or under and be playing at a Serie A club this season, with a market value of under 50m euros (according to Transfermarkt). The striker must have a physical presence about him to replicate the physical presence of Lukaku, and those involved have an impressive goal/assist contribution this season (in relation to the number of appearances made). All these prerequisites allow us to identify potential targets that would be able to come in and have a positive impact in Inter’s current system, who are also realistic and affordable transfers from their own division. Below is a list of players involved:

In this data analysis, we will look at how each player has performed over the course of the 2020/21 campaign in Serie a. There will be a scope on three key areas – goal contributions, on the ball work (dribbling and passing) and the defensive side of the game. The stats of the players above will also be compared to Lukaku in each of these areas.

Should Romelu Lukaku leave the club this year, he leaves big boots to fill. His form this season has been astonishing, he looks to be reaching the peak of his game, and whoever replaces him will have to chip in with their share of the goals. In this segment, we will look at aspects like the goal and assist record of each player, as well as shot accuracy and xG. 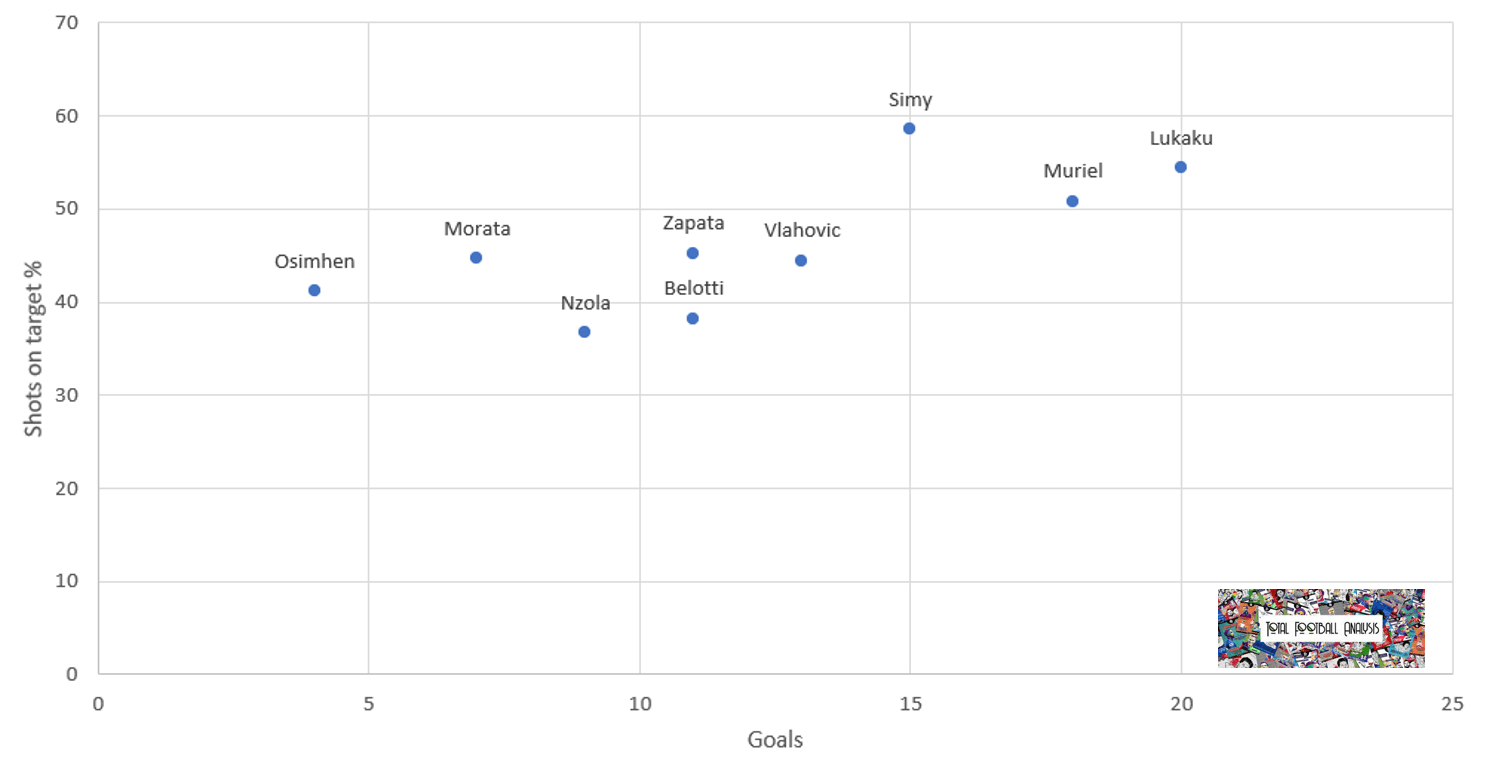 This first graph gives us a visual idea of how lethal each player is in front of goal, with their shot accuracy and goal record on display. Lukaku is ahead of all potential replacements with 20 goals this season, with Muriel close to him with 18. Simy, who has 15 goals this season, has a shot accuracy of 58.5%, the highest percentage of the lot, showing that he is very reliable in front of goal – his side don’t create many chances, but when he is presented with one, he is likely to take it.

It is important to remember that Osimhen has only featured in 15 games this season for Napoli and has started only a small number of games. Nevertheless, he has contributed with 4 goals, and registered a shot accuracy of 41.2%. Once he gets back to full fitness and acquires more Serie A match experience, he could be a deadly striker in the division, no matter which club he is representing. 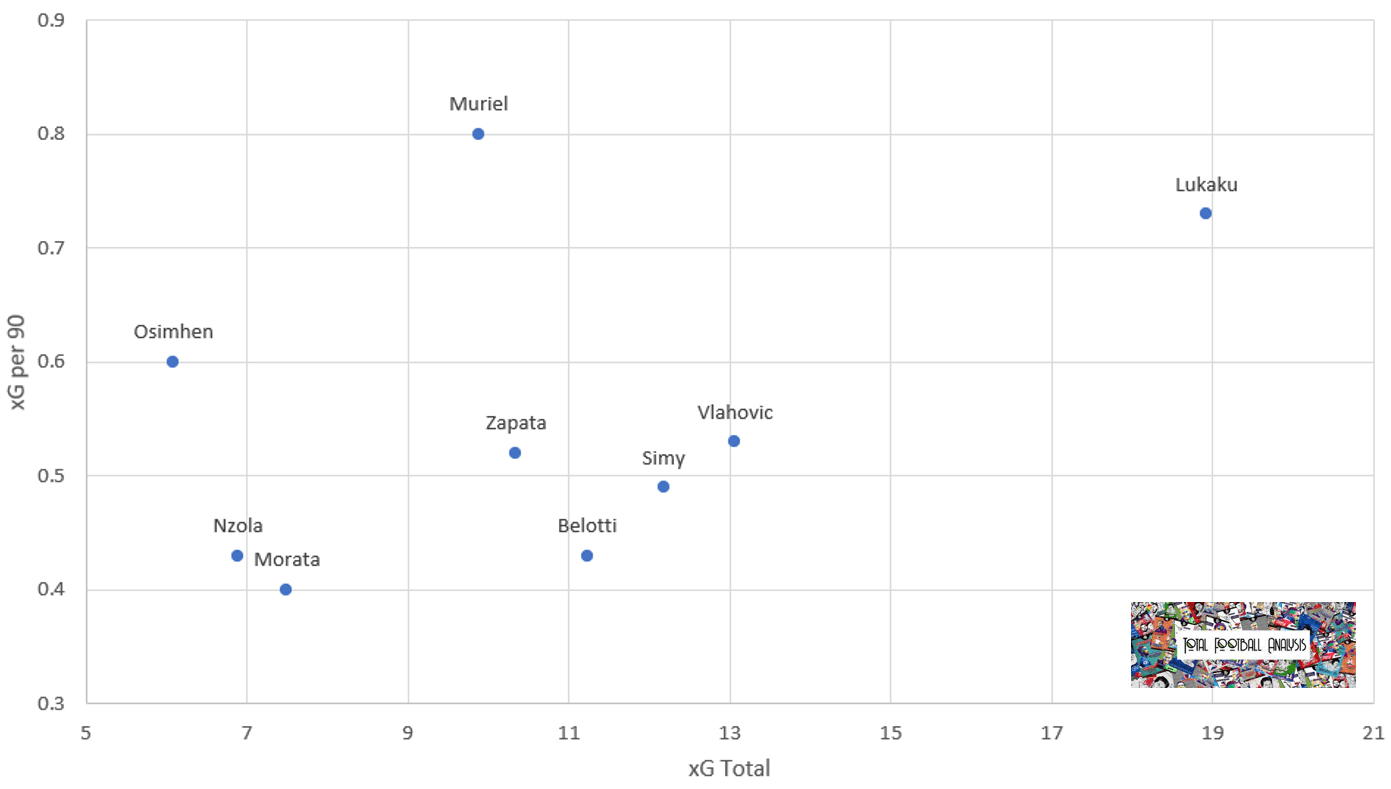 Here, we see an xG representation of how each player performs in front of goal, giving us an idea of their reliability and consistency in front of goal. Luis Muriel is miles ahead in the average xG per 90 category (0.8), but its Lukaku leading the way by some distance with the overall xG for the season (18.93). Behind him, we have the likes of Belotti (11.23), Simy (12.18), and Vlahovic (13.07), who have showed a consistency in being involved in goalscoring opportunities.

While Romelu Lukaku isn’t known for his passing and dribbling talents, he is effective in both areas, so it is important that any potential replacement that Inter bring in is able to create chances as well as put them away. In this segment, we will discuss the assist record of the players along with their overall passing accuracy for the season, as well as looking at how they perform when it comes to dribbling. 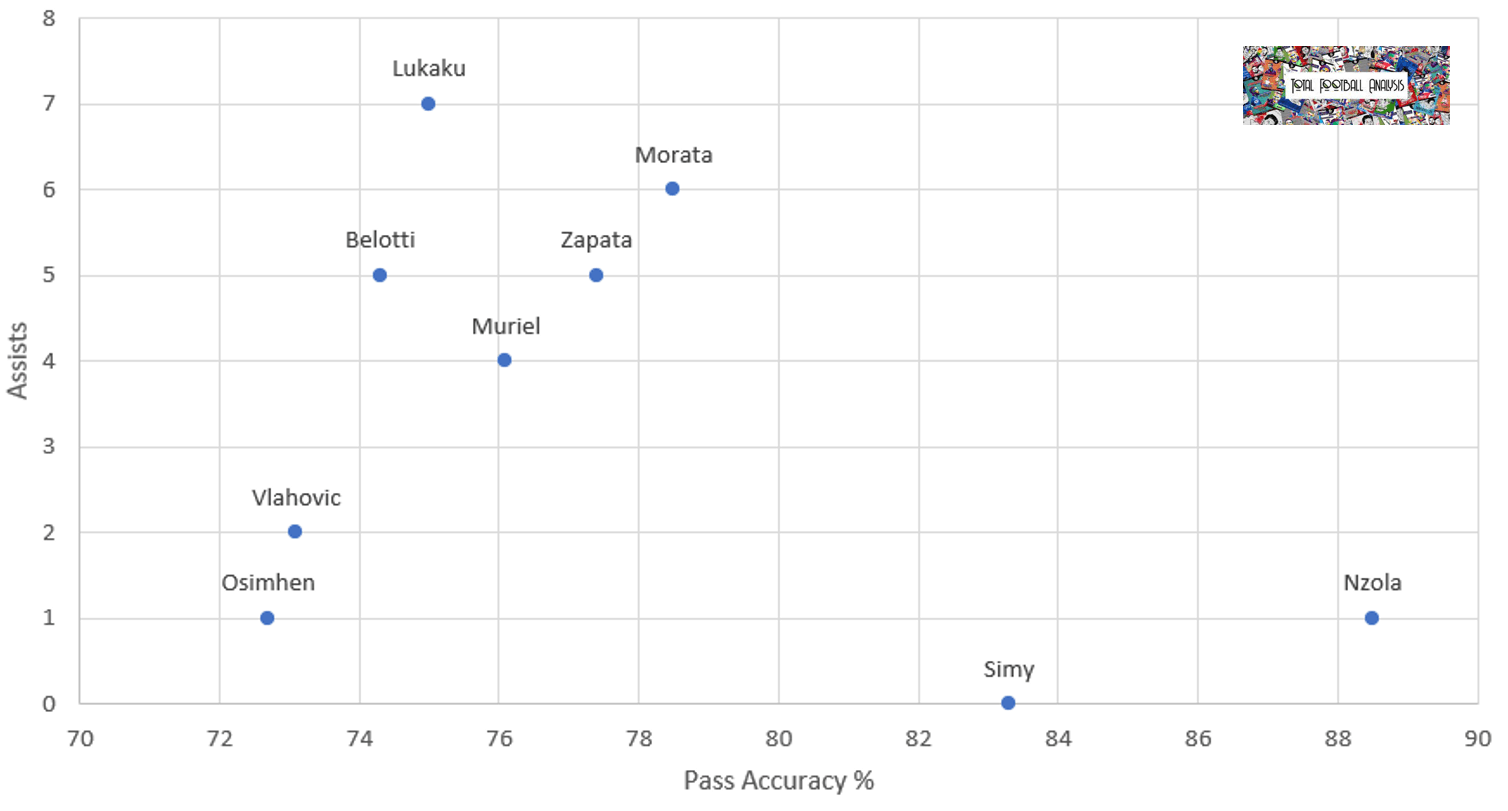 This graph gives a visual representation of the number of assists made by each player this season, along with their overall passing accuracy. This gives us an idea of how able they are to provide chances for others when they can’t score themselves – an important element in the Inter system. Immediately, it’s Nzola who stands out thanks to his impressive pass accuracy of 88.5%, showing how comfortable he can be with the ball at his feet. Crotone’s Simy also impresses in this area with a pass accuracy of 83.3%, but has registered 0 assists; though this may be linked to his team’s struggle in Serie A.

Again, we see an indication of just how important Lukaku is to Inter, leading the way with 7 assists. His ability to both score and create in such a high volume is incredible and is a massive part of why Inter are finding the success they have been this season. Morata also impresses in this area, with 6 assists to his name, and a pass accuracy of 78.5%, suggesting he is still a trustworthy player on the ball.

Osimhen and Vlahovic will both want to improve this corner of their game, with both players having less than admirable numbers in both passing accuracy and assists. 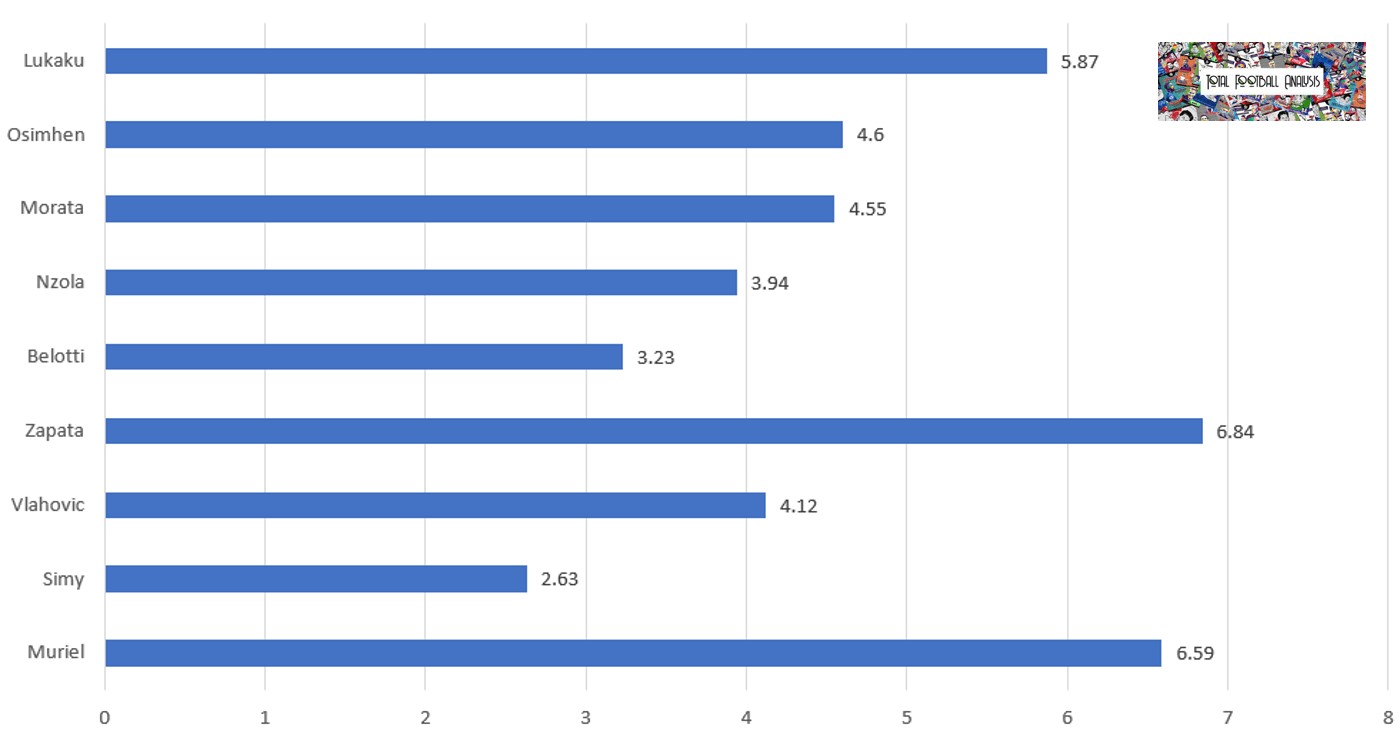 This next graph shows the average number of touches each player has in the penalty area per 90 minutes. While this may seem like a tiny detail, it highlights a player’s ability to get involved and get on the ball in the box, in dangerous areas – this also highlights a desire and an ability to contribute to and build attacks; not just finish them off. Zapata (6.84) and Muriel (6.59) both register high numbers of ball touches in the penalty box, which highlights the fact that they have the skills mentioned before, while also standing as a testament to the Atalanta attacking system.

Simy registers the lowest touches in the box per 90 with 2.63, but again, this is likely down to his side’s struggle in the division – he is reliable in front of goal and isn’t required or expected to make a huge contribution other than scoring goals. 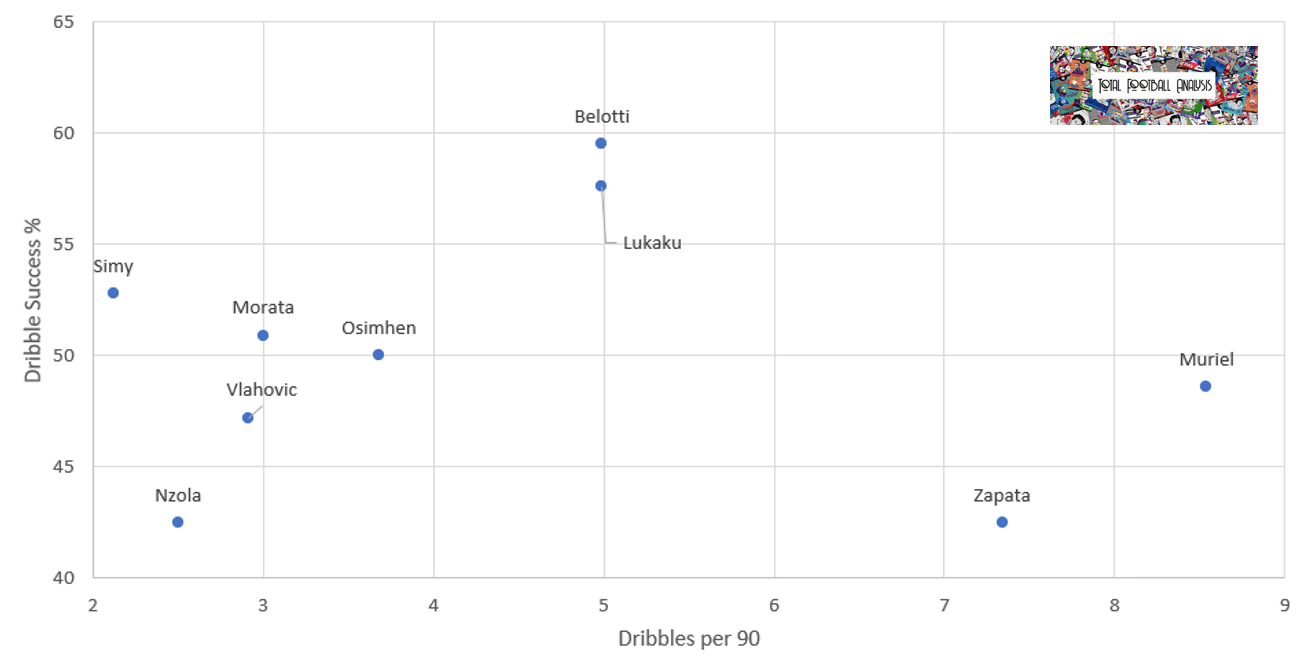 Above, we can gain a further insight into how competent these players are on the ball, as we analyse their dribbling statistics. As with the previous chart, we see Zapata and Muriel leading the way in attempted dribbles per 90 (7.34 & 8.54 respectively) – but Zapata in particular will want to improve on his success rate of 42.5%

Belotti averages a healthy amount of dribbles per 90 (4.99), but its his success rate that turns heads in this area, with 59.5% of his dribbles being successful, the highest of the lot here. We are also starting to see a little trend of the same players producing lower numbers in this segment, with Simy, Zola, Vlahovic, and Morata all attempting a low number of dribbles.

While being effective on the ball and being clinical in front of goal is vital for any Inter striker, contributing in defensive and physical areas are just as important. Should Lukaku leave and be replaced, the new striker would need to be somewhat strong as well as providing defensive energy too. 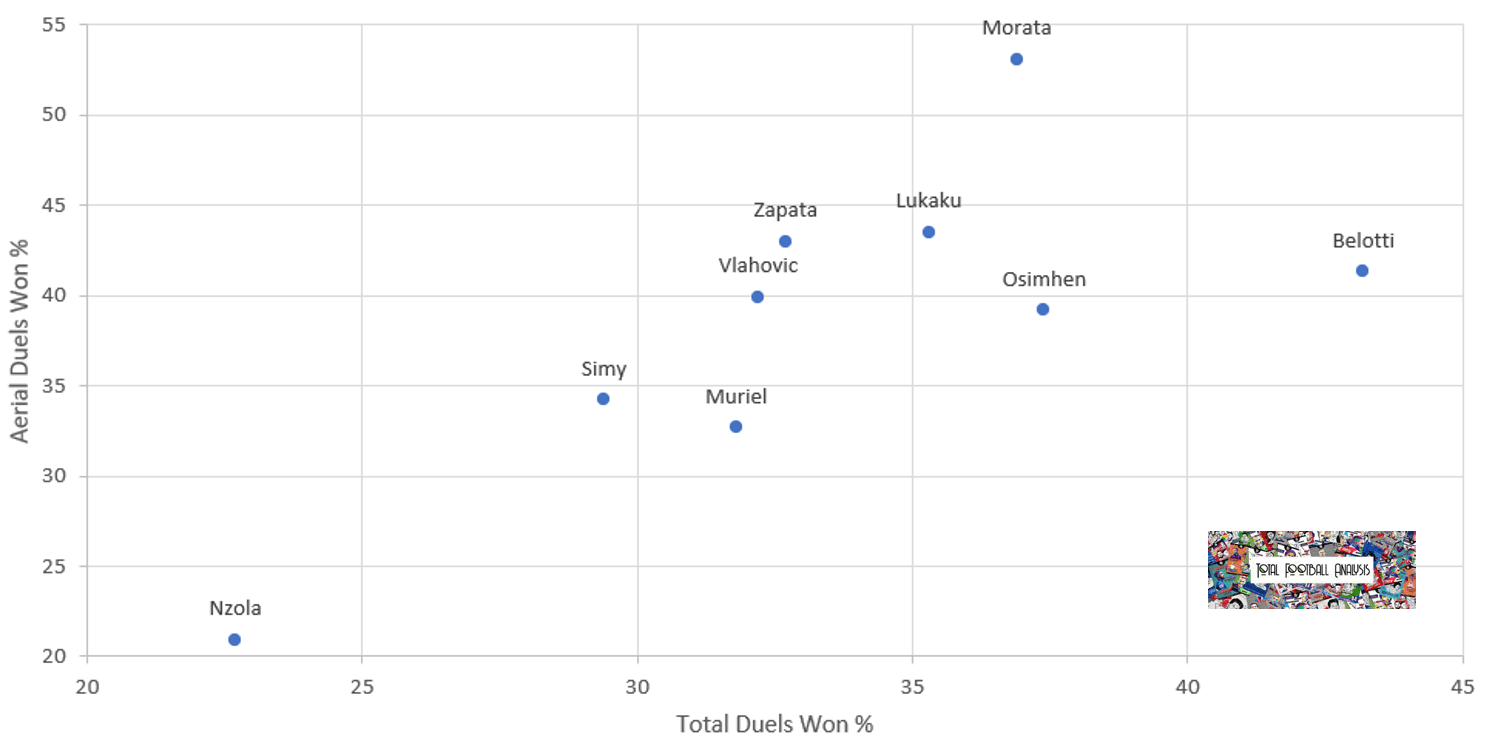 The first graph of this segment shows how effective each player is in a duel – both aerially and in general. Both areas are important they are elements of Lukaku’s game that benefit Inter greatly: he is able to use his strength and aerial ability to regain possession or further an attack. He has a record of winning 43.5% of his aerial duels, with an overall duel win rate of 35.3. 3 players hold higher success rates this season – Morata (36.9% total duels, 53.1% aerial duels), Osimhen (37.4% total duels, 39.2% aerial), and Belotti (43.2% total duels, 41.3% aerial.) All 3 of these players have demonstrated the necessary set of physical skills to be an effective presence. Our data suggests that Nzola isn’t a player who relies on physicality, ranking with the lowest rates in both of the areas above. 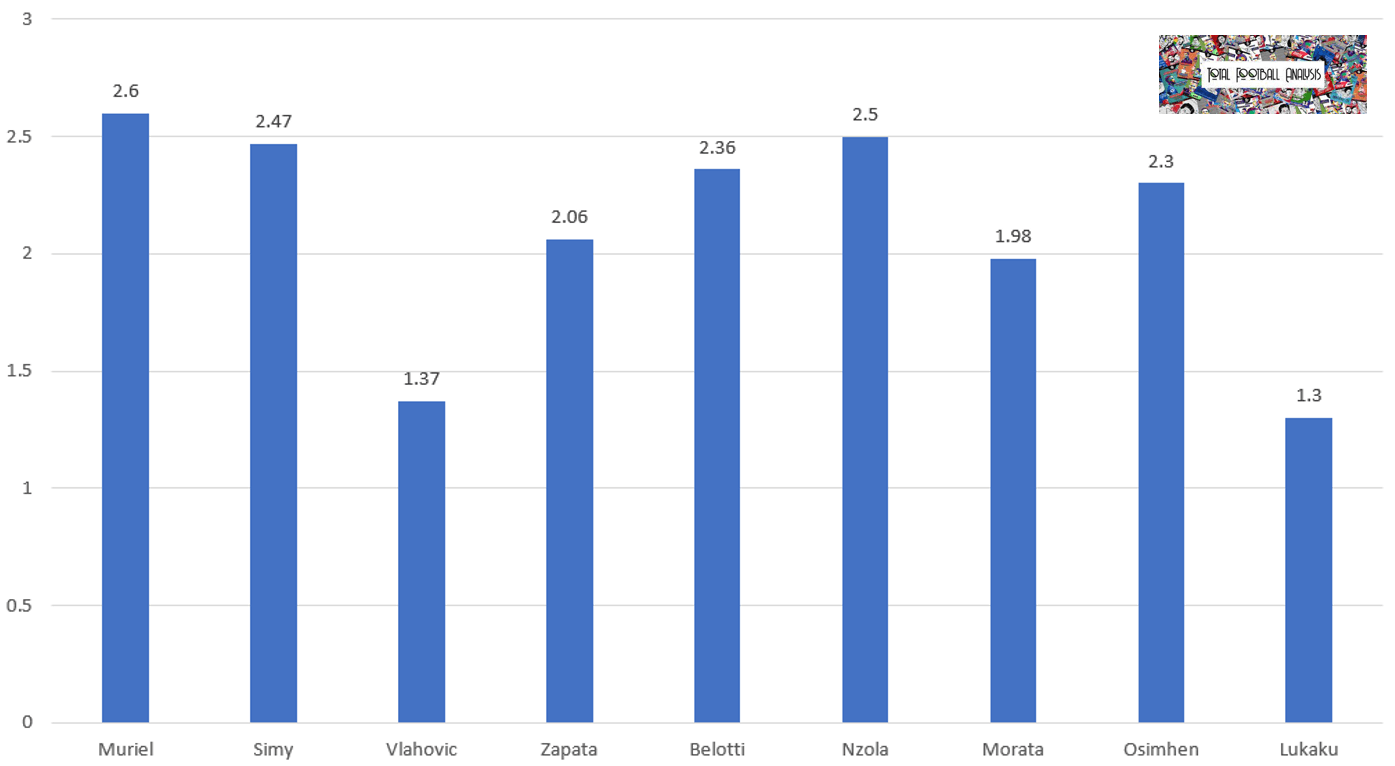 This final graph shows us the average number of recoveries made by each player per 90 minutes. As we can see, this isn’t Lukaku’s specialty – this role often falls to other players around him. However, if Inter were to sign a striker who possesses the ability to make a significant amount of recoveries, this could push their game even further. Muriel, Simy, and Nzola all have impressive numbers in this area, showing a desire and ability win the ball back for their side. Belotti and Osimhen also show that they are capable, while Vlahovic doesn’t seem to be the type of player to apply himself as much in this area.

It goes without saying, there is still a strong chance that Romelu Lukaku will be in an Inter shirt for the 2021/22 season, but with his form growing stronger by the week, it would be no surprise if another big club came knocking. This data analysis report has helped to identify a number of potential targets for Inter, who meet the criteria outlined at the start of the report. There are four players who positively stand out for different reasons – Simy, Álvaro Morata, Luis Muriel, and Dušan Vlahović. Simy has proven that he is very effective and clinical in front of goal for a struggling team, but he also impresses in other areas like passing, dribbling, and making recoveries. This player would be a cheaper option for Inter, given his age (28) and that his side are staring relegation in the face. Morata has showed us that he is an effective player in physical situations, which would fit in well with Inter’s system. He would also bring experience to the side having played in Serie A for a number of years, as well as other top leagues in Europe. Luis Muriel may be the most expensive option of the final four players, but his wide skill set and energy both on and off the ball would make it worth every penny. His eye for goal is remarkable, but he is also very effective in building attacks too. Finally, Vlahovic may be one of the most realistic options, but may also have a large price tag on him due to his age and potential. At just 21, he has a good range of skills that has made him an important part of Fiorentina’s set up – he would be a good long-term option for Inter. And there we have it, the top four potential Serie A strikers who could replace Lukaku without spending a mammoth transfer fee. The players who didn’t make the top four still possess various qualities, but our data doesn’t suggest that they would be able to fill the boots of Lukaku and would likely all be more expensive than Inter would like. The future is bright for both Inter and Lukaku, regardless of where the Belgian forward ends up.