In football today the word ‘identity’ can be treated as a buzzword. Something that looks good on a social media post or as part of an advertising campaign. New coaches take over at a club and talk about wanting to instil an identity as part of their game model at a club. There are some coaches, however, with whom the word identity becomes more than a buzzword and becomes integral to the way in which they expect their teams to play.

These coaches are, largely, amongst the most well known and highly regarded in football today. The likes of Pep Guardiola, Jurgen Klopp and Marcelo Bielsa are all examples within the Premier League while if we go further afield the likes of Julian Nagelsmann and Jesse Marsch often talk of the importance of identity within their game models at RB Leipzig and RB Salzburg respectively.

There is, however, another example of a coach imprinting their identity on the way that their team plays and this is happening in an unusual place. MK Dons currently play in League One, and under their coach, Russell Martin, they are playing a possession-based game with an emphasis on penetrating the opposition defensive structure and occupying the final third. This playing style has resulted in some incredible displays of football at Stadium MK. It has been especially striking that even when the club have been struggling in terms of results Martin has refused to compromise on their style of play.

In this article we will examine this style of play and game model to better understand what makes MK Dons so interesting. 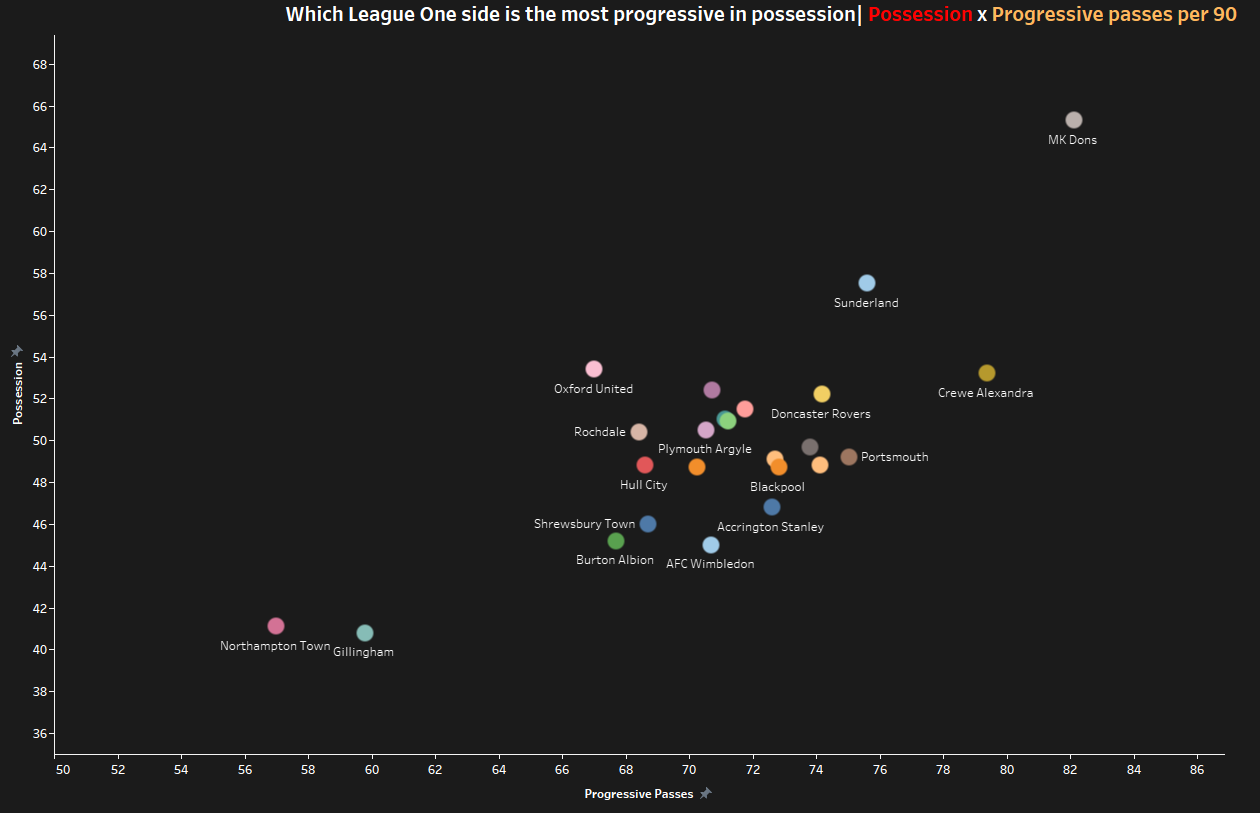 When we talk about MK Dons in the attacking phase it is important to first understand their approach to the game from a possession point of view. We start by comparing all teams in League One and looking at their average possession and how many progressive passes they are averaging per 90. As you can see from this scatter graph there is truly no comparison as MK Dons are averaging, at the time of writing, 65.3% of possession and 82.12 progressive passes per 90.

While they tend to dominate possession within their matches the emphasis is very much on the importance of possession with a purpose. They look to penetrate through to the opposition penalty area as often and as quickly as possible. 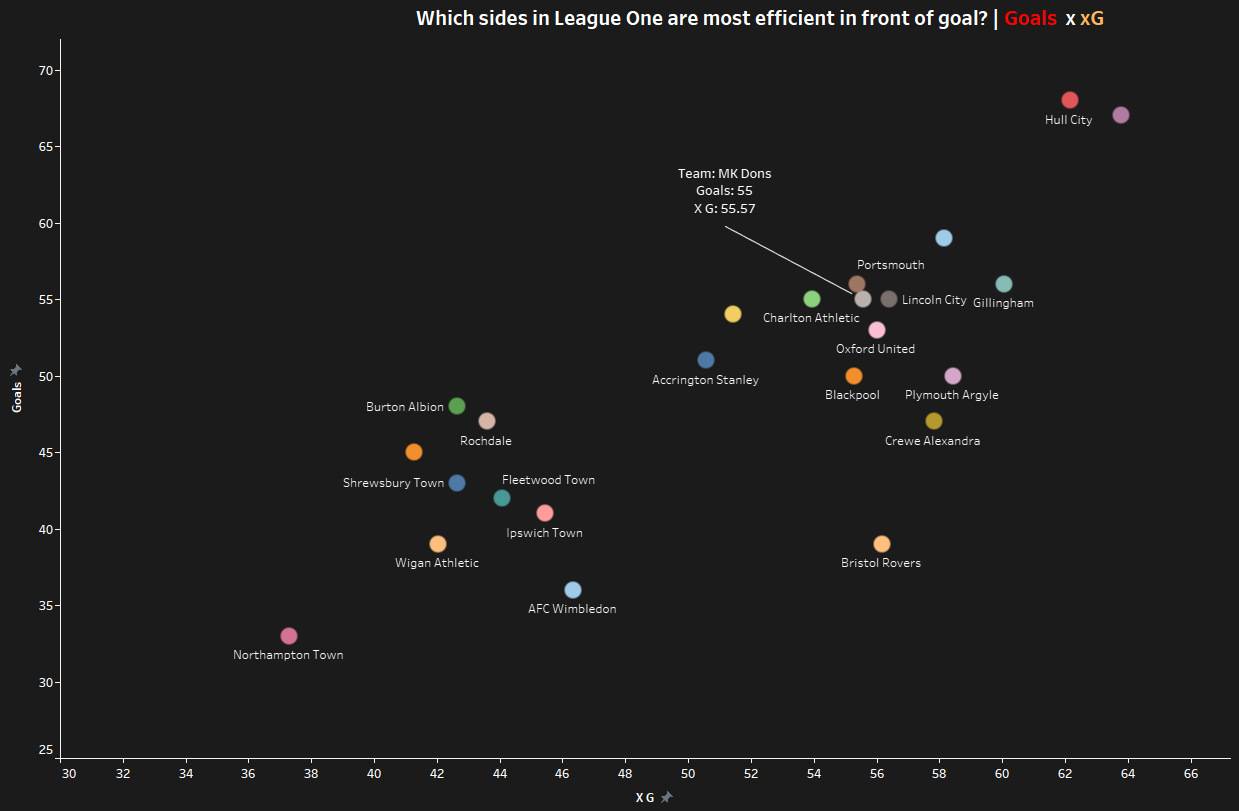 How does this translate to their efficiency in front of goal? In this plot we are looking at each team’s goals scored compared to expected goals. As you can see, while MK Dons are no longer the outlier they were on the previous chart they are still very much in the pack of teams that are competing in the top half of the table. They have scored 55 league goals this season from an xG of 55.57. In other words they are scoring at almost exactly the rate that we would expect them to. 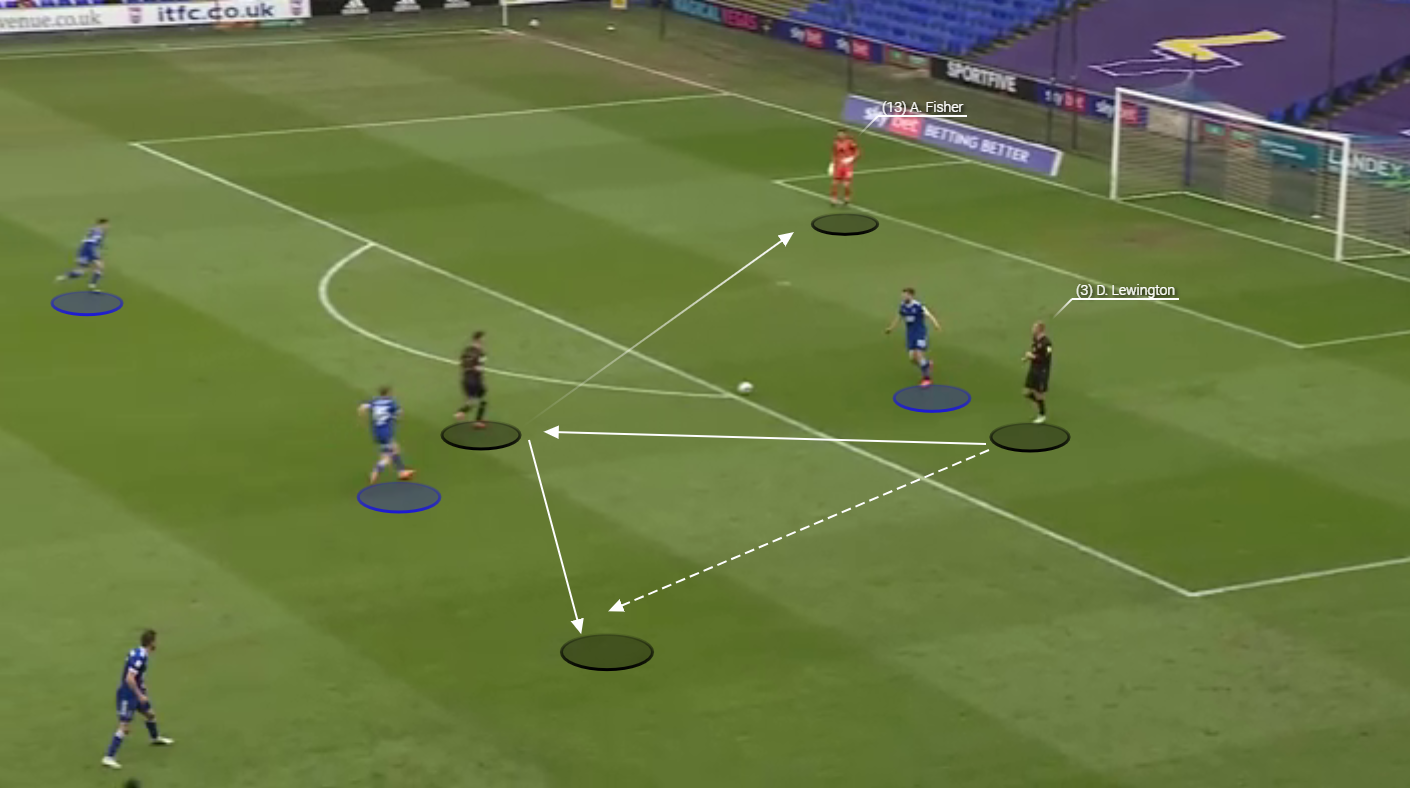 The first thing that stands out when watching MK Dons in the attacking phase. They use either a 3-5-2 or a 3-4-2-1 system and one of their primary principles of play is that they look to build up from the back and progress through the thirds.

This means that in possession they have to be brave in their actions. This is shown in this image as Dean Lewington is bringing the ball out from the back. The central midfielder drops deep to combine and receive ahead of the line of pressure and in this instance, we would normally expect the next pass to be out to the goalkeeper at an angle. Instead Lewington continues to move forward and receives the ball back after a 1-2 before progressing forward. 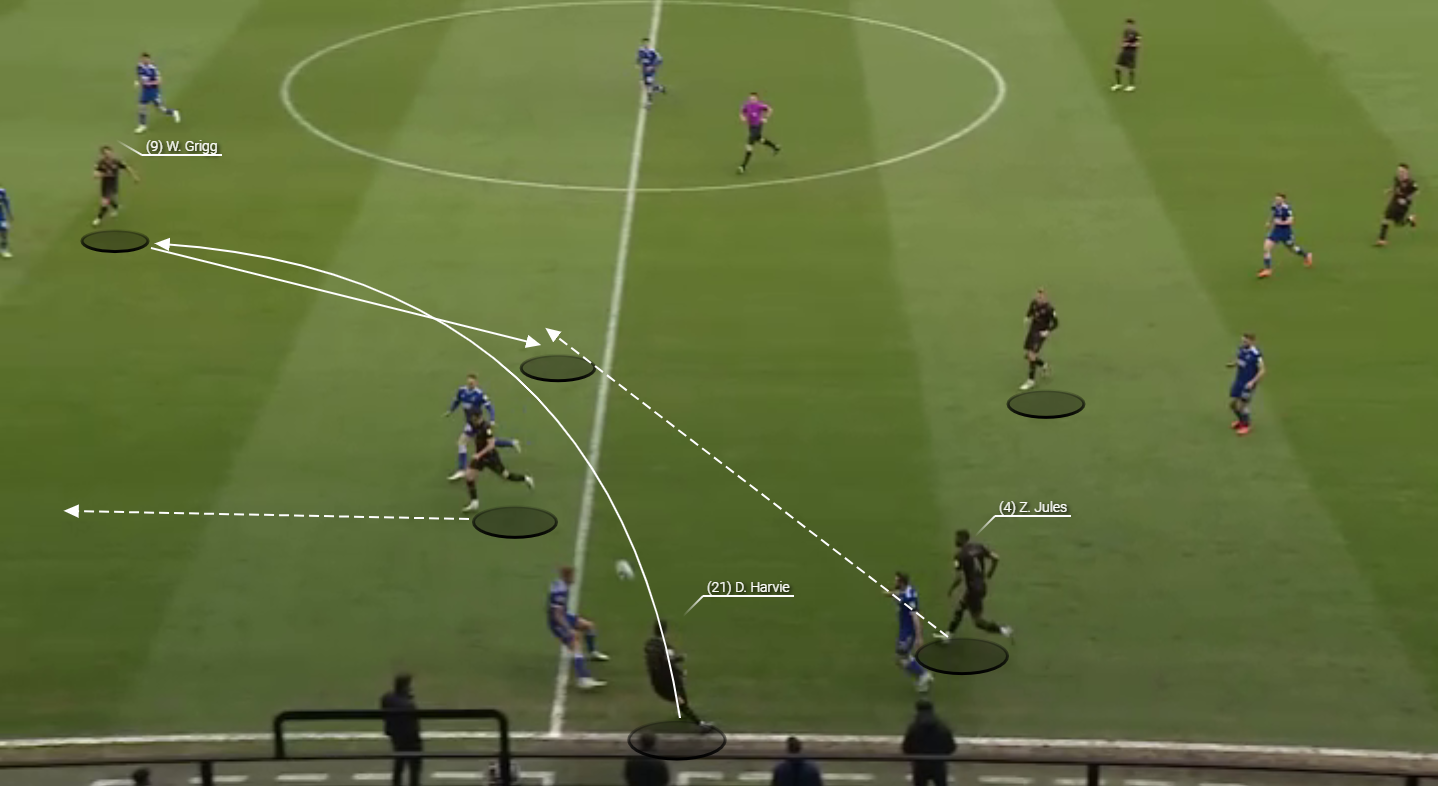 As they progress the ball through the thirds and into the middle third of the pitch there are a lot of up, back and through concepts to allow MK Dons to break through and access the final third. The creative way that these are set up, however, means that often the wide central defenders are included in this motion.

As soon as MK Dons start to build-out from the back in these positions the two wing-backs move quickly to a high line. This stretches the width of the opposition defensive structure and means that there is always a wide option on either flank. In this example we see the left wing-back Daniel Harvie as he receives the ball on the left flank. He immediately fires the ball around the corner to the feet of the striker who is coming back in order to receive with his back to goal. The up, back and through concept is completed by the left-sided central defender Zak Jules moving up to receive the ball back from the striker in the opposition half.

We have already discussed the preference that MK Dons have for playing progressive passes but this mindset extends to forward movements without the ball as players are encouraged to be aggressive and proactive in their movements. 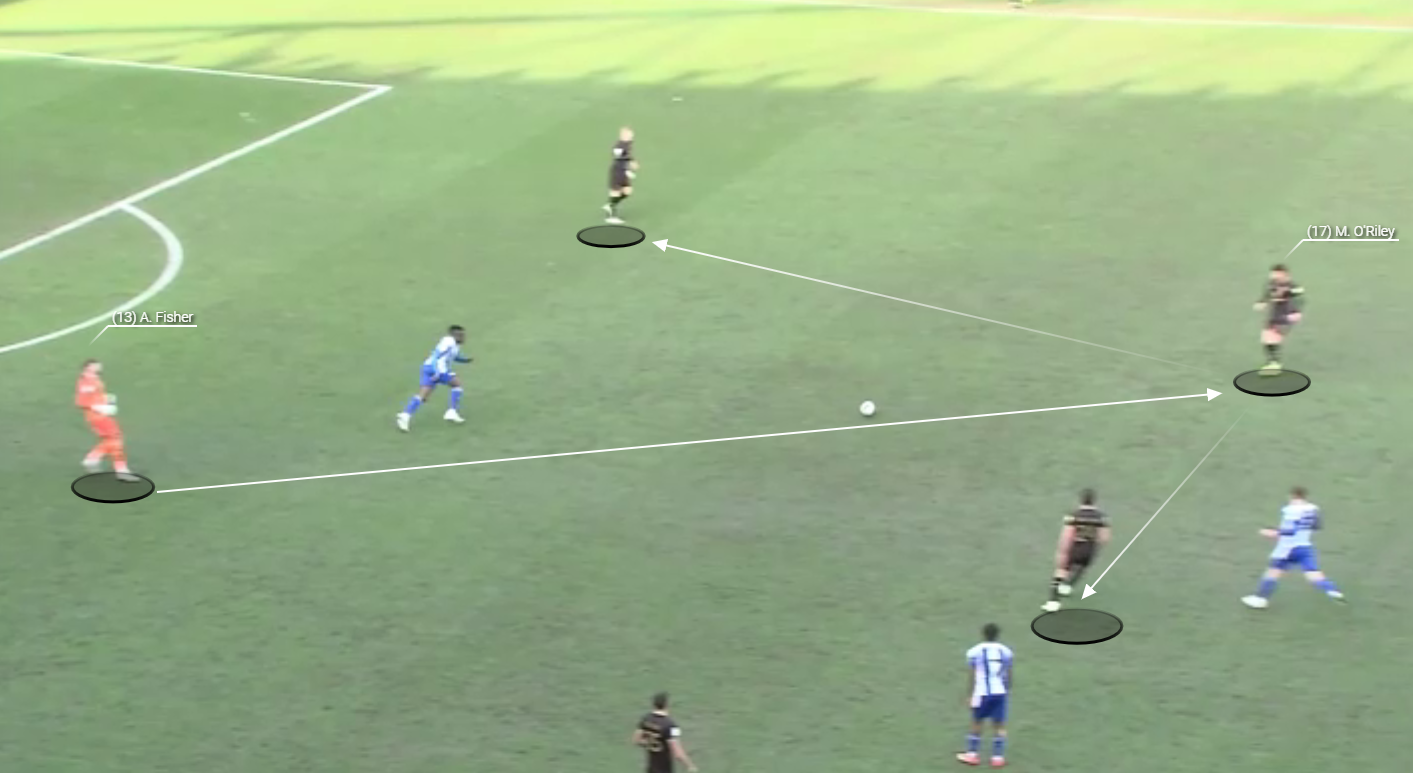 Rotations and vertical movements play a huge role in the attacking game plan that Russell Martin uses at MK Dons. The central midfielders move back towards the ball in order to receive the ball before moving it out to the wide central defenders or wingbacks. It is also notable how proactive the goalkeeper, typically Andy Fisher, is in possession as he is often positioned outside of his area acting as another active part of the build-up for his team.

In this example we see this as Fisher is initially in possession, 25-yards out from goal, as he is pressed he could be forgiven for looking for a longer pass in order to escape the pressure. Instead, he has the composure to find the feet of the rotating midfielder who receives and then turns to attack forward and through the lines. There are two passes that are perhaps easier in order to retain possession but MK Dons players are encouraged to be brave and proactive in possession.

Next, we will look at the way in which MK Dons play out of possession when they are in the defensive phase. It is interesting to note, as you can see from the graph, that they are one of the most proactive sides in League One when it comes to pressing the ball. They have the fifth-lowest PPDA (passes per defensive action) in the league which means they try to press the opposition when they have the ball. At a PPDA of 9.28 they are allowing the opposition an average of 9.28 passes before triggering a defensive action. 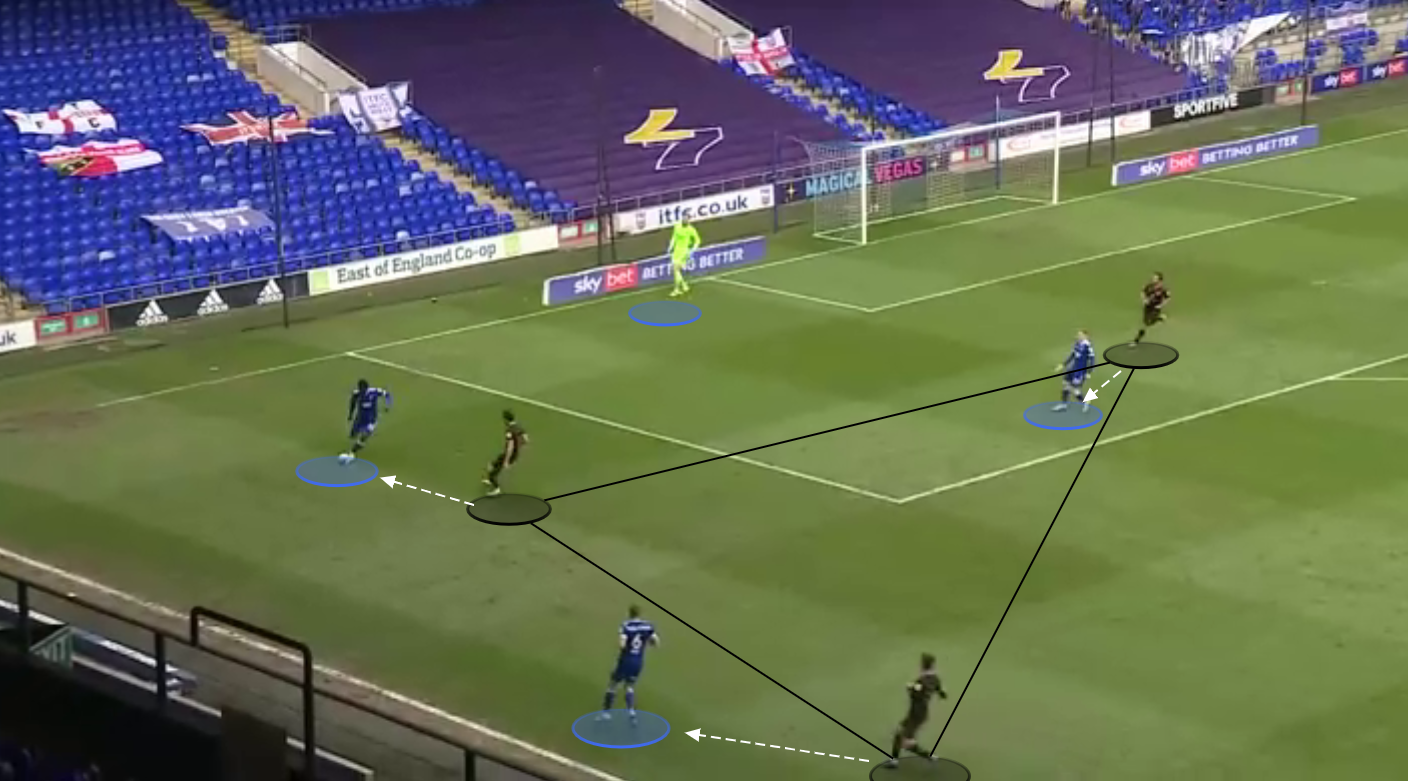 When MK Dons move to press high in an aggressive manner they tend to do so with man on man orientation. The player pressing the ball carrier will move quickly to engage and will block the passing lane behind him. This press will then be supported by players moving to press and engage the opposition players who are positioned closest to the ball in order to prevent the man in possession from easily escaping the pressure.

We see this in this example as one player engages the ball while two others move to cut off potential passing options. 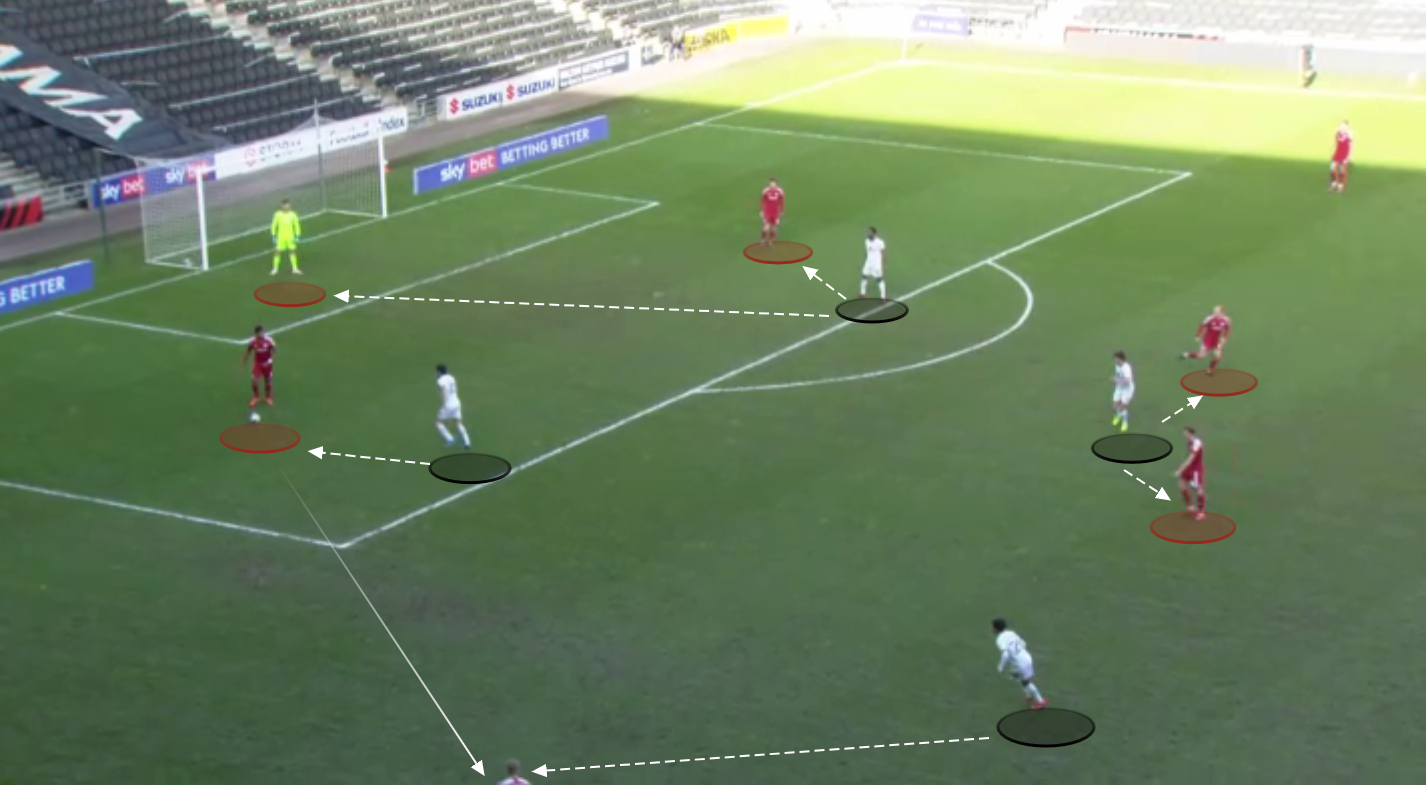 We see this again here with the opposition having possession inside their own area. While the first player moves to engage the ball there are two others with dual coverage, responsibility for pressing two potential ball receivers. This time there is a trap in place as the wide player closest to the ball is left open to receive the pass. As he does so the press is triggered and when he receives the ball, facing his own goal and tight to the touchline the aggressive press causes a turnover of possession. 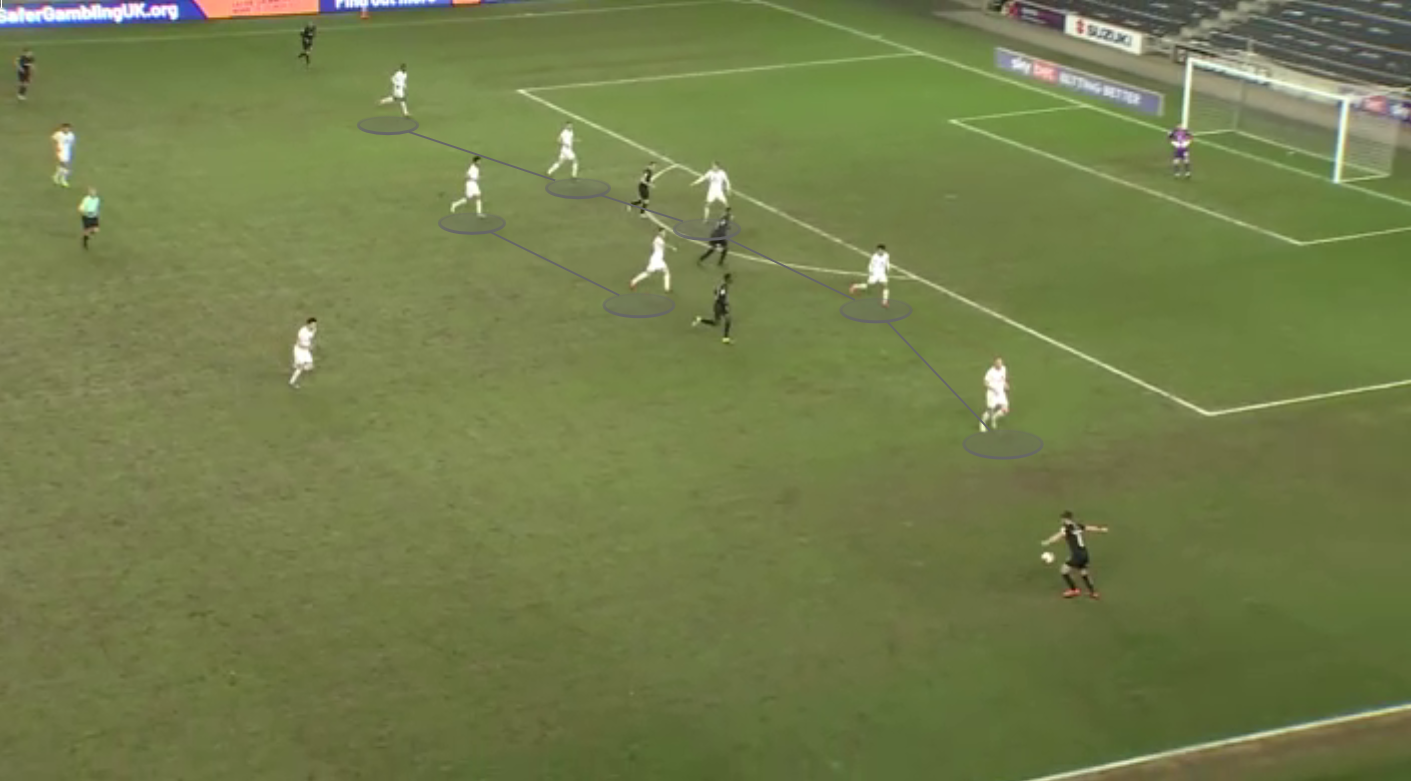 The key to this defensive structure is a simple one, balance, as the wingbacks drop deep to occupy traditional fullback positions out of possession they form a back five. As the opposition looks to attack in the wide areas the wingback/fullback is free to engage the ball carrier with the central defender on that side of the pitch able to cover the space left open.

In this example you can see the spacing of the MK Dons defensive structure, as well as their communication as players, are passing on information regarding the movement of opposition players.

At the time of writing MK Dons sit 12th in League One. They have dropped points in some matches in which they would have been expected to win but no matter what the outcome of the match Russell Martin stays true to his vision and footballing identity.

MK Dons are a side that feel set up for success under Martin, the key will be in keeping the coach at the club and if they continue to perform this way that may be extremely hard. 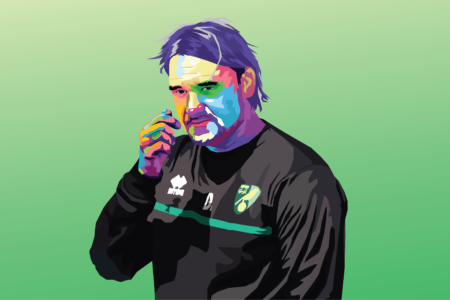