There is a plethora of young English talent who have the potential to represent the country at a senior level currently playing first team football at club level, and this is the case in almost every position on the pitch. While English youngsters who are featuring in the Premier League are earning plaudits and call-ups to the senior England set-up – think Mason Greenwood at Manchester United, Curtis Jones at Liverpool, or Phil Foden at Manchester City for example, there is also a strong number of exciting young players currently plying their trade around Europe who should not go unnoticed. In this data analysis, we will take a look at four young English central midfielders who have displayed electrifying potential that should attract the interest of a future call-up. We will compare their stats from several key areas, against each other, with the aim of gaining more clarity about the potential they all possess.

To maintain consistency and realism, we have outlined a number of essential requirements that must be met to be included in this article. At the time of writing, the players must meet these rules:

Below is a set of player profiles for the four players who will be included in the data analysis.

At just 17 years of age, Dortmund’s Jude Bellingham already looks like a star in the making. After impressing in his debut season at Birmingham City in 2019/20, making 41 appearances along the way, many clubs swarmed with interest. Eventually, the youngster made the wise choice of leaving England for Germany, where he has been amongst the fist team of Dortmund regularly, making 19 Bundesliga appearances and 7 appearances in the Champions League to date. Bellingham has 1 senior cap to his name but expect that number to rise drastically in the coming years.

In 2016/17, Ronaldo Vieira had his breakthrough season at Leeds United, competing in the EFL Championship on 34 occasions that campaign. His performances during that and the following season at Leeds attracted a lot of attention. His destination was Sampdoria in Serie A. After 2 seasons at his new club, he now finds himself on loan at fellow Serie A team, Hellas Verona. While his season has been hampered by injuries, his future still looks incredibly bright and just 22 years of age, he will be keen to display his potential once more.

19-year-old defensive midfielder Clinton Mola is yet to feature in the 2020/21 season due to injury. Because of this, we will be using his data from the 2019/20 season – in which he featured a handful of times for at German Budesliga 2 side Stuttgart. Through his short career, both in Germany and at the higher youth ranks of Chelsea, Mola has played a variety of positions, including left-back and centre-back, but is also a very capable central midfielder, hence his inclusion in this analysis.

Up until the end of the 2019/20 season, attack-minded central midfielder Angel Gomes was a bright prospect at Manchester United, having made a handful of first team appearances over a couple of years. However, with those appearances becoming less and less common for the now 20-year-old, he took the decision to seek first team football elsewhere. In the 2020/21 season, he has found just that, playing a vital role in the midfield for Liga Nos side, Boavista.

In this first segment of data analysis, we will cover 3 key areas that demonstrate essential skills for a central midfielder – overall duels, aerial duels, and breaking up play with interceptions and recoveries. 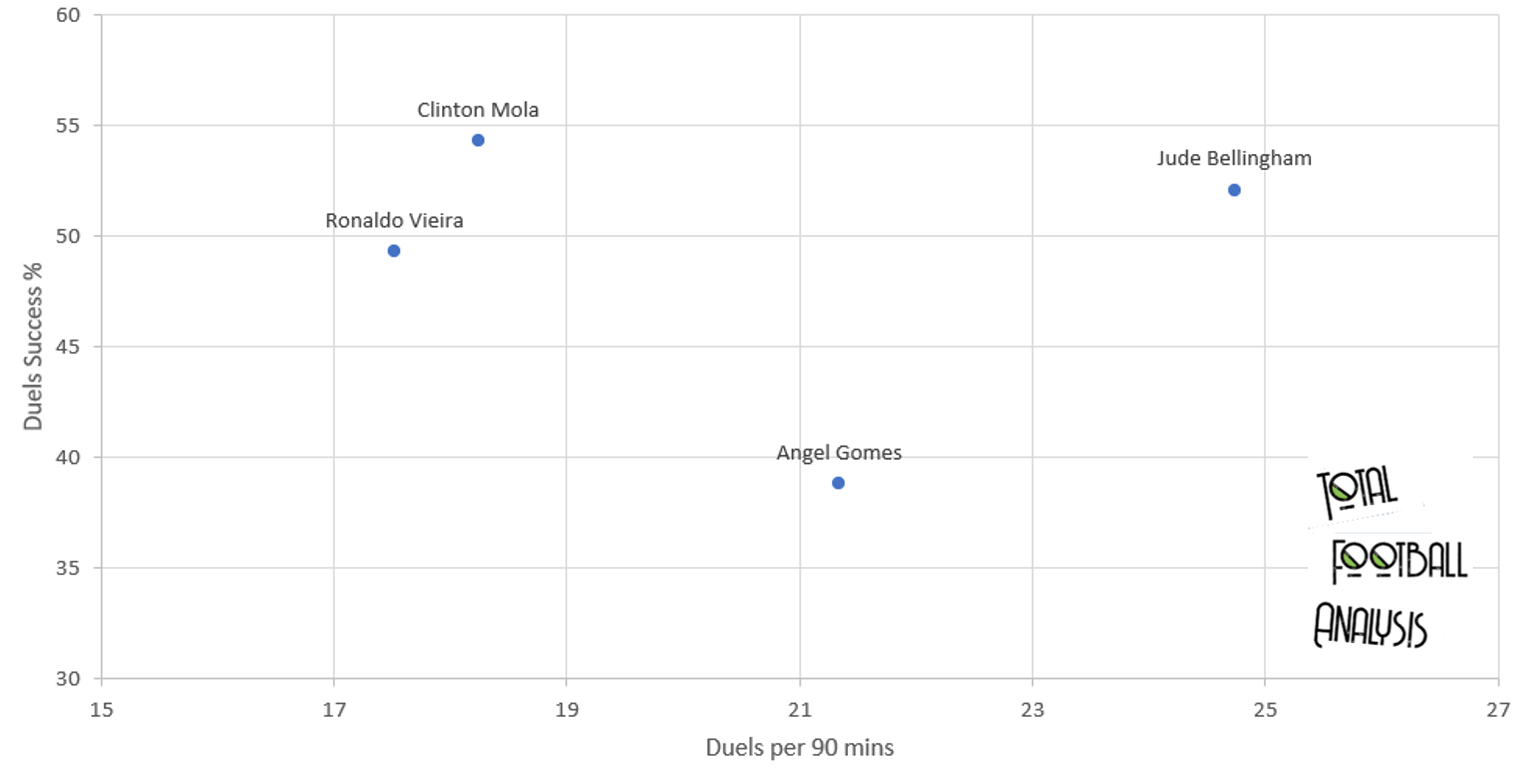 This first graph shows us how many duels each player participates in on average per 90 minutes, with a success rating included as well. Straight away, you can notice that Jude Bellingham is way ahead in terms of number of duels per 90, recording an impressive 24.74, with a decent success rating of 52.1%. This demonstrates his desire to get involved in a challenge and regain possession for his team. Clinton Mola, while averaging lower than Bellingham and Gomes, boasts a higher success rating, winning 54.3% of his duels. Mola is a naturally defensive player, which shows through here, and could help him become a fine defensive midfielder in the years to come.

Although he more of an attacking midfielder, Angel Gomes will want to improve on his defensive game in the coming years. The former Old Trafford youngster does have the second highest average of duels per 90 in fairness (21.34), but he also has the lowest success rating of the group, coming out on top in just 38.8% of his duels. Ronaldo Vieira is almost the opposite to Gomes. The Serie A midfielder averages the lowest number of duels per 90 (17.52), but a success rating of 49.3%, which could be classed as above average. The fact that he is winning a decent number of duels indicates that he has the ability to contribute in a defensive capacity. 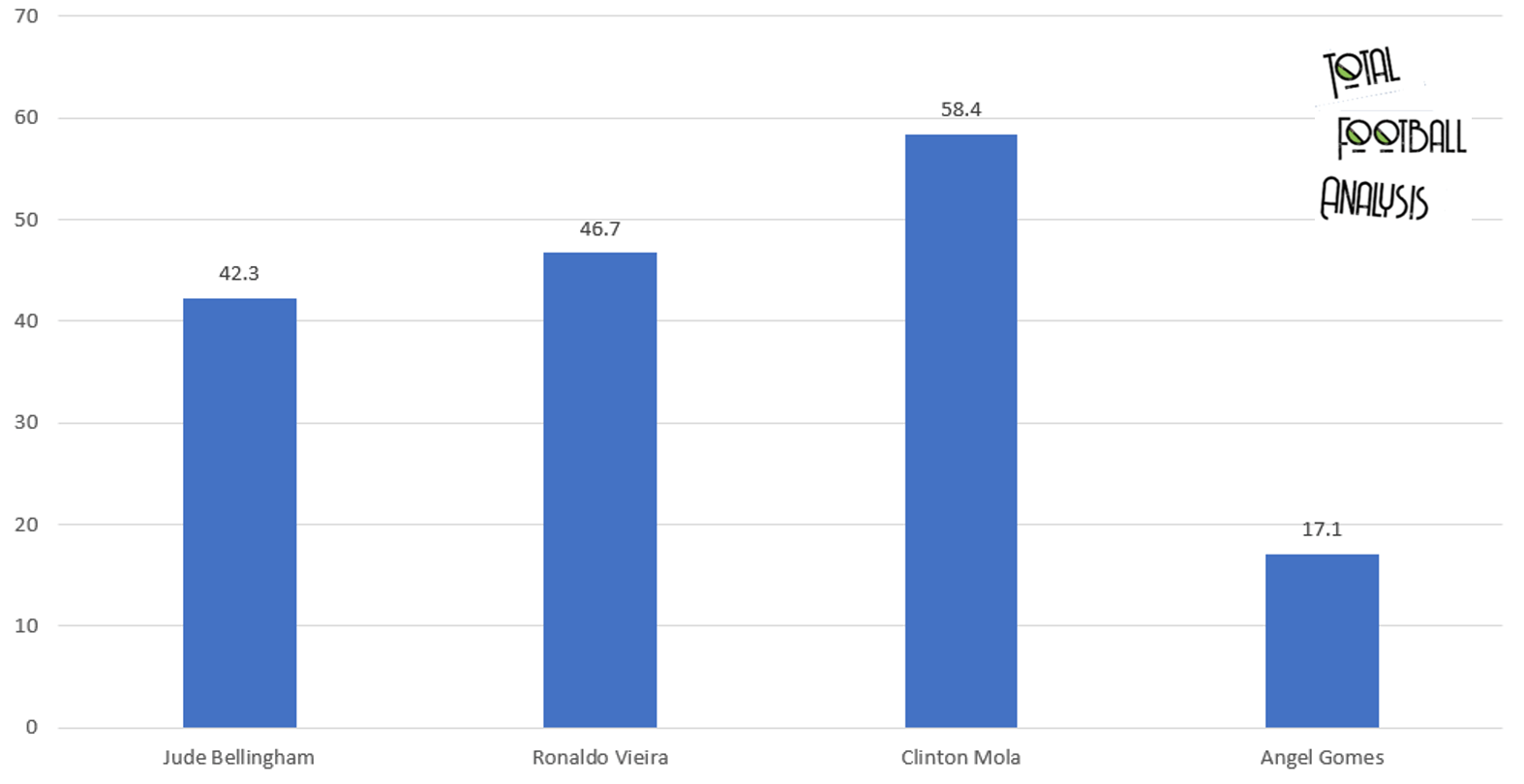 The above graph gives us a visual representation of how each player performs in aerial battles, giving us a clearer idea of their overall defensive ability. Leading the way is Clinton Mola, who won 58.4% of his aerial battles in the 2019/20 campaign, with Vieira and Bellingham recording success rates of little under 50%. Angel Gomes is the player again struggles, winning just 17.1% of his aerial battles this season. It is, however, important to regard his playing style and role – not many attacking midfielders are known for their aerial prowess.

Breaking Up the Opposition Play 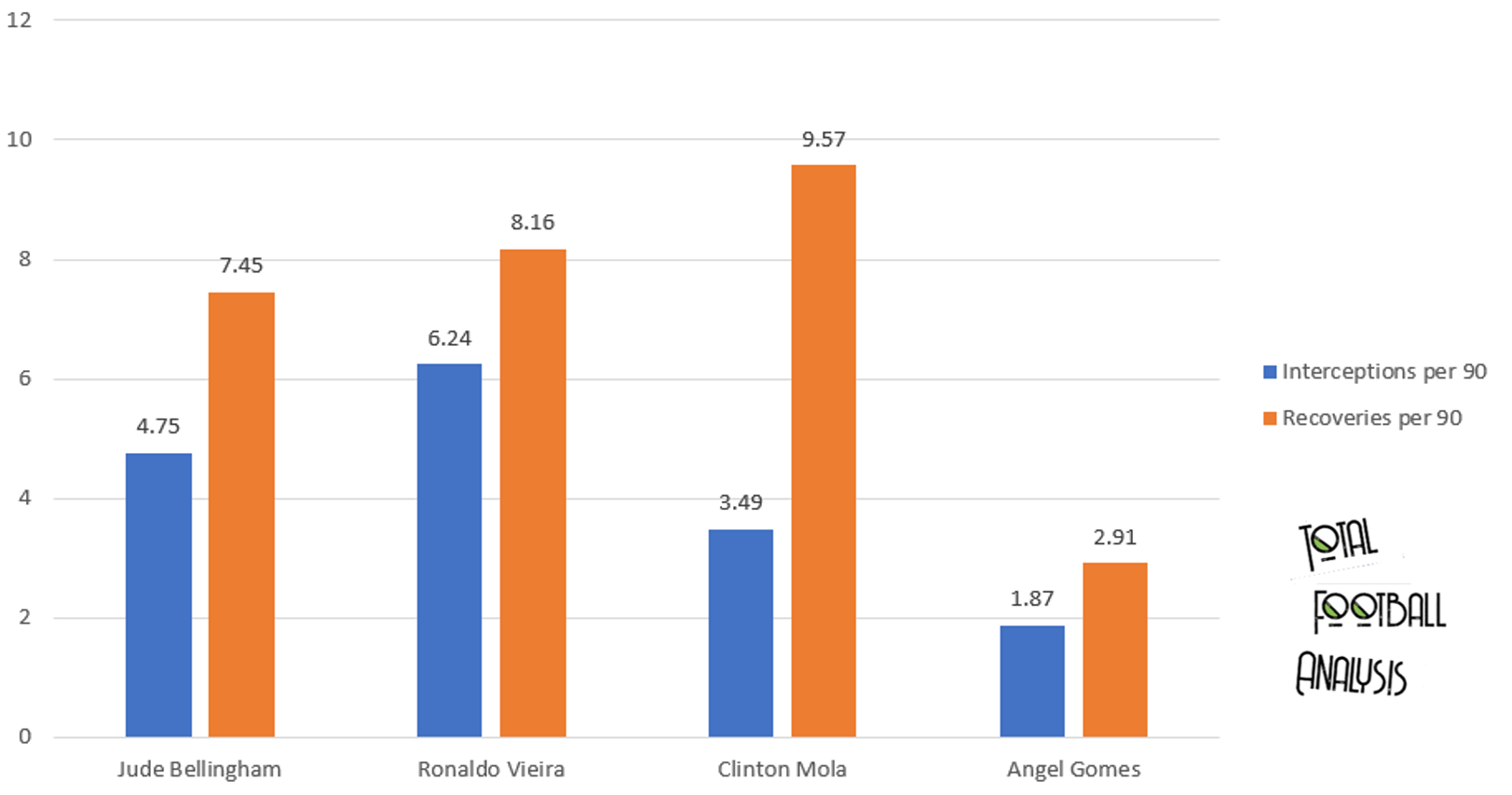 Regardless of whether you are a defensive midfielder, or a more attack-minded midfielder, contributing off-the-ball has become a vital element for almost every team. Above, we have a chart that shows the average number of interceptions and recoveries made by each player per 90 minutes. Angel Gomes again has the lower numbers; he is the most attack-minded player of the group. Despite having the lowest numbers, making 2.91 recoveries per game is impressive for an attacking midfielder as this indicates he is capable of winning the ball in dangerous areas of the pitch.

Clinton Mola again demonstrates his defensive power, averaging 9.57 recoveries per 90, showing his work-rate off-the-ball to be phenomenal. Ronaldo Vieira is the man who has recorded the highest average number of interceptions per 90 (6.24), showing that he has the ability to read the game and cut out dangerous passes. Vieira also impresses in winning the ball back via recoveries, averaging 8.16 per 90.

This segment will cover arguably the most important areas for a central midfielder – their work on the ball. We will analyse their numbers in key areas like passing and dribbling to gain an understanding of their talent on-the-ball. 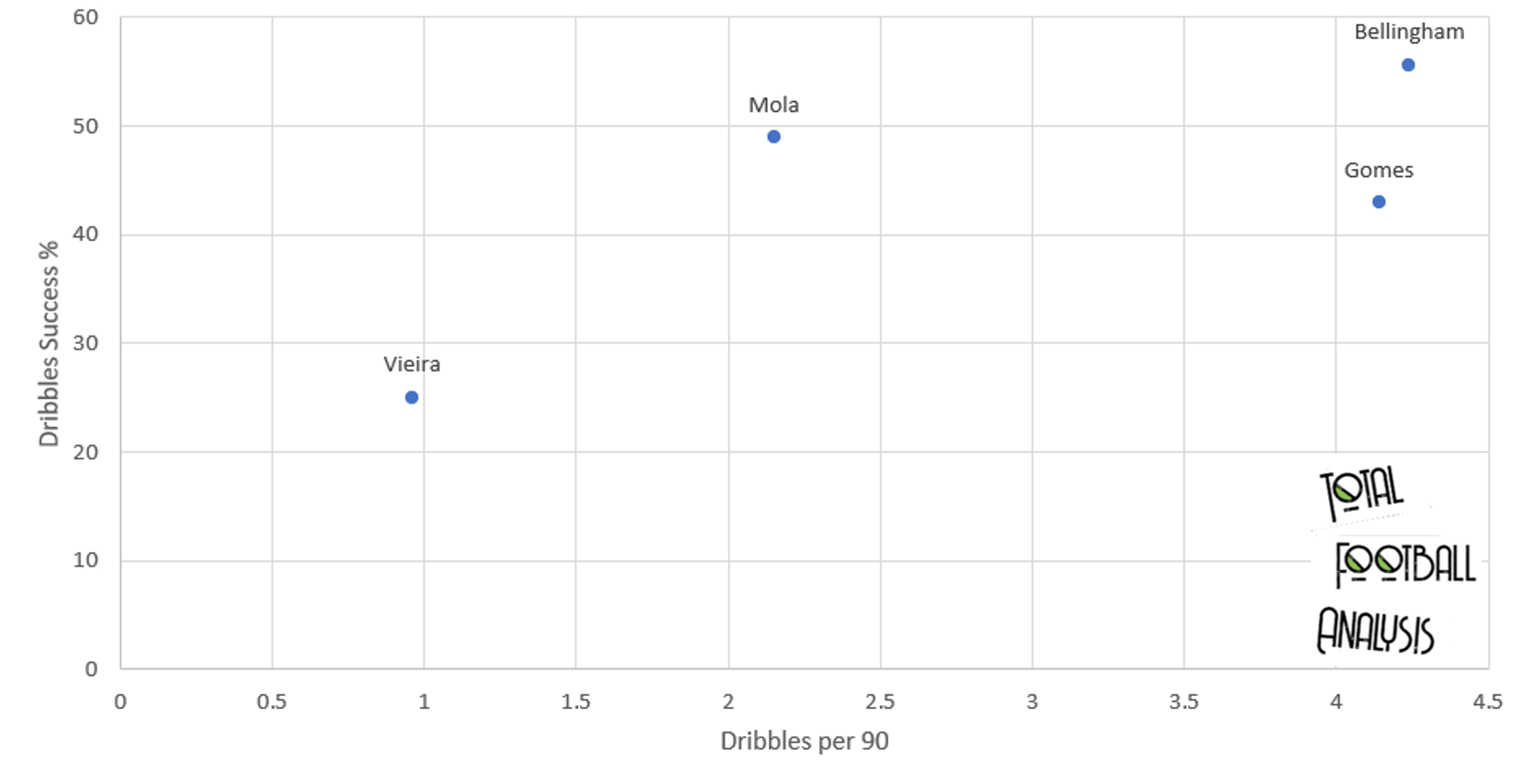 This graph compares the average number of dribblers per 90 along with an overall success rate. This will allow us to understand how talented each player is at carrying the ball forward to progress an attack for their team. Jude Bellingham clearly possesses good ability on the ball, especially when you consider he is a first team regular in the Bundesliga. Bellingham tops both the average number of dribbles (4.2) and success rating (55.6%), representing not only the talent, but a level of consistency too. Angel Gomes also impresses in this area of the game, averaging 4.14 dribbles per 90, combined with a success rating of 42.9%; insight into his capabilities on the ball for Boavista.

Ronaldo Vieira and Clinton Mola both register lower averages for dribbles per 90 (0.96 & 2.15 respectively), but it’s Vieira with the lower success rate. The former Leeds man has seen just 25% of his dribbles this season be successful – compared to Mola’s 2019/20 success rate of 48.9%, which is actually quite impressive. 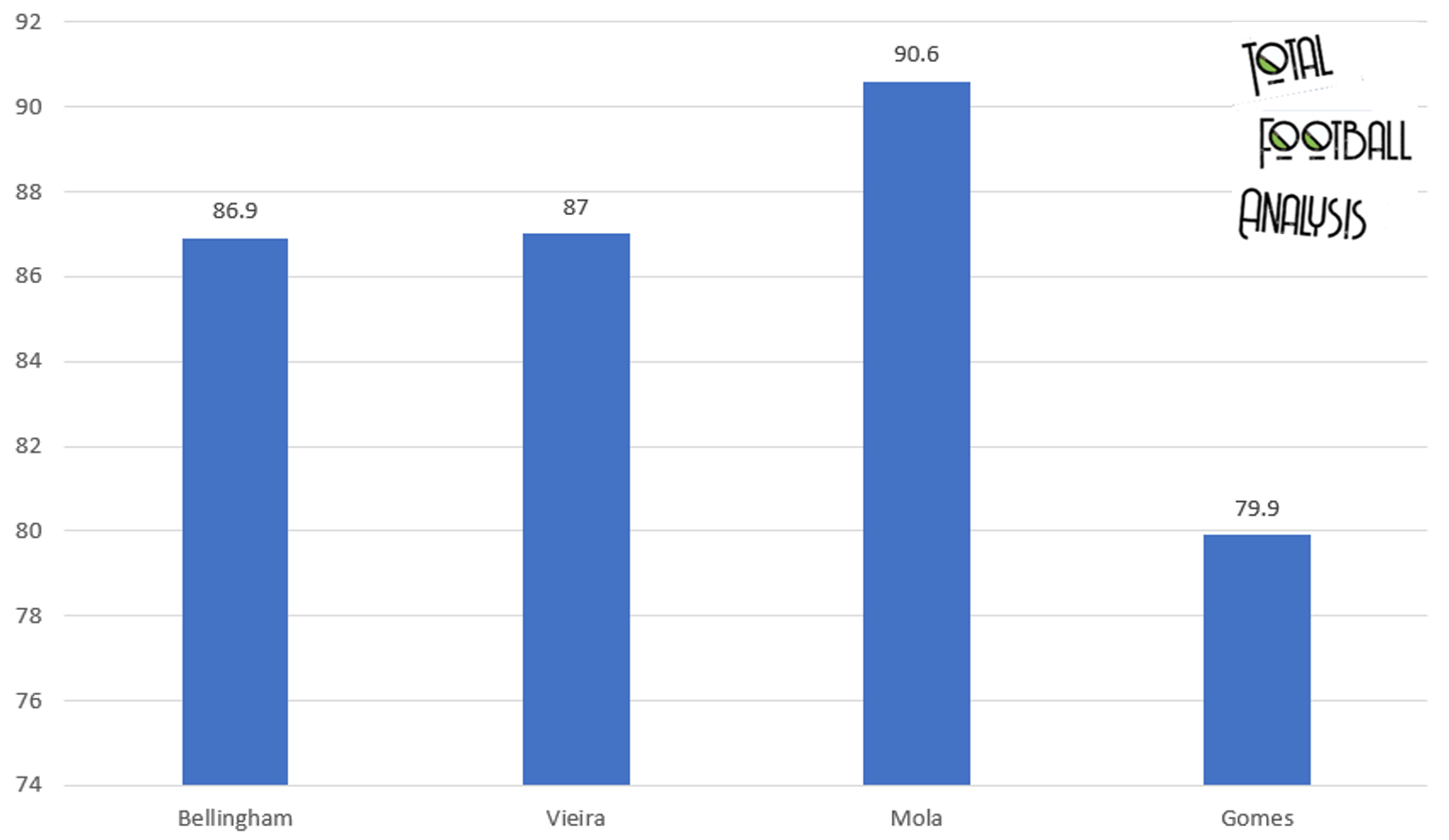 We can now get a picture of how each player distributes the ball generally, with a chart of their overall passing accuracy. Clinton Mola impresses yet again, with a notable accuracy of 90.6% over the course of 2019/20. Ronaldo Vieira and Jude Bellingham (87% & 86.9% respectively) also register admirable accuracy ratings, both demonstrating that they too have potential in the passing department.

Angel Gomes’ lower accuracy rating of 79.9% suggests that he needs to work on either his passing technique, timing, or decision making to equip him better for progressing the attack with a pass.

As a central midfielder, you may often be responsible for driving an attack forward, rather than simply retaining possession with sideways and backwards passing. The above graph shows the average number of forward passes each player makers per 90, along with the accuracy of their forward passes. Surprise, surprise – Clinton Mola stands out again in both areas. With an average of 18.38 forward balls per 90, and an accuracy of 81.3%, he clearly has an intent to push attacks on quickly but is also very capable of doing so in Bundesliga 2. Bellingham (13.91 & 72.9%) and Vieira (14.88 % 77.4%) also boast respectable stats in this area.

Understandably, Angel Gomes attempts less forward passes (8.82) as he is often more advanced positionally than the other 3 players, but he will definitely want to improve on his accuracy in this area (64.8%) – taking that next step will allow him to be much more threatening in attacks for his team.

In this final segment, we will consider the goal contributions made by each player. While goals and assists are not a make-or-break component of a successful midfielder, having them on your record certainly pushes your game forward. 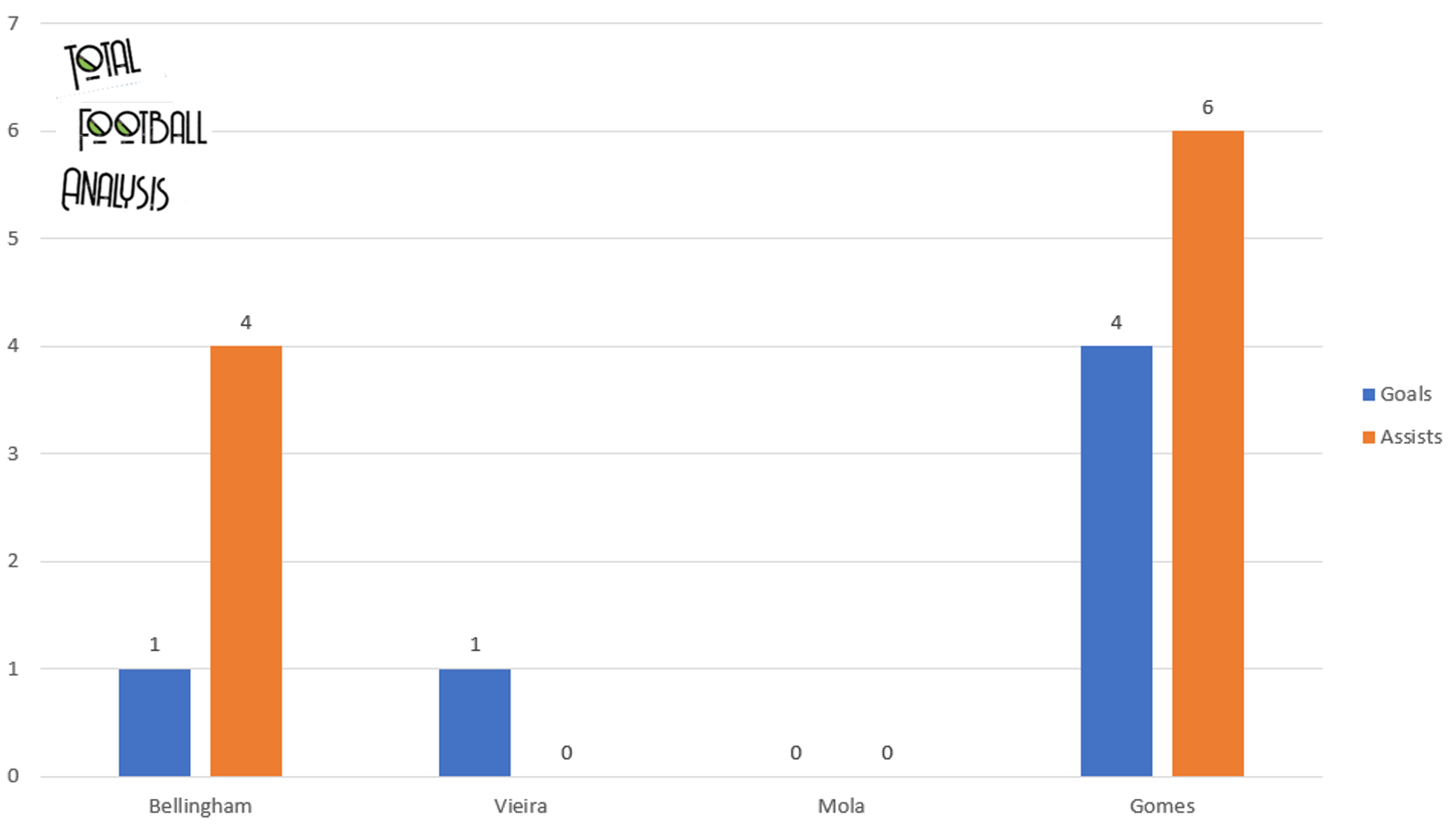 Previously in this article, it has been mentioned that the type of role each player has will impact various stats. And this seems to be the case here as well. Angel Gomes has a very impressive goal contribution this season so far, with 4 goals and 6 assists. This highlights his attacking desire, but also suggests he is able to take up dangerous positions from which he can contribute greatly. Jude Bellingham also seems to have little problem with this at Dortmund, with 1 goal and 4 assists this campaign.

Clinton Mola (0 goals/assists) and Ronaldo Vieira (1 goal & 0 assists) would both like to increase their records in the goal contributions margin, but as defensive midfielders, this is not their priority.

If this data analysis has proved anything, it’s that England have four very talented young midfielders playing around Europe. While it is important to remember the level each of these guys is currently at on a club scale, their potential is quite clear, and if they can be nurtured and coached in the right way, they each have promising futures. Clinton Mola appears to be a very versatile footballer, able to provide defensive contribution as well as possessing passing capabilities – if he hits the ground running when he returns from his injury, expect to hear his name a lot more often. Angel Gomes clearly has talents in the attacking department and being a regular feature in the Liga Nos will develop his skill-set even more. Ronaldo Vieira is now in his third season in Serie A football, and despite having an injury-hit campaign so far, his future could be huge if he carries on developing in the way he has done so far. Jude Bellingham, having already received his first senior cap for England, has huge expectations surrounding him. At 17, to be a regular starter for Dortmund in the Bundesliga and Champions League speaks volumes about the talent this player has. England have plenty of young talented players in the Premier League and the EFL, but they must also keep their eyes on the young Englishmen abroad too. 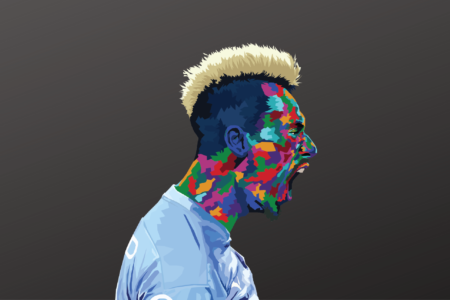 Bipin Singh: What makes him one of India’s hottest prospects?

Scoring a lot of goals has always been an integral part of Sergio Lobera’s teams, and this is the case […]