The North London Derby had a very different setting this time, with both Arsenal and Tottenham not having great seasons. Spurs were top of the tree early on but a string of poor performances has seen them fall to seventh, heading into the derby. They were six points adrift of Chelsea in fourth and looking to close the gap in the hope of securing Champions League football next season. As for Arsenal, they were sat in tenth, needing a win to close the gap to the Europa League spots. They were 10 points adrift of Chelsea and eight adrift of Everton in sixth heading into this fixture. Both sides needed a win and although it was not a top of the table clash, there was still plenty to play for. In this tactical analysis, we will look at the tactics of both sides and our analysis will show how Arsenal managed to overcome an early setback to dominate and win the game. 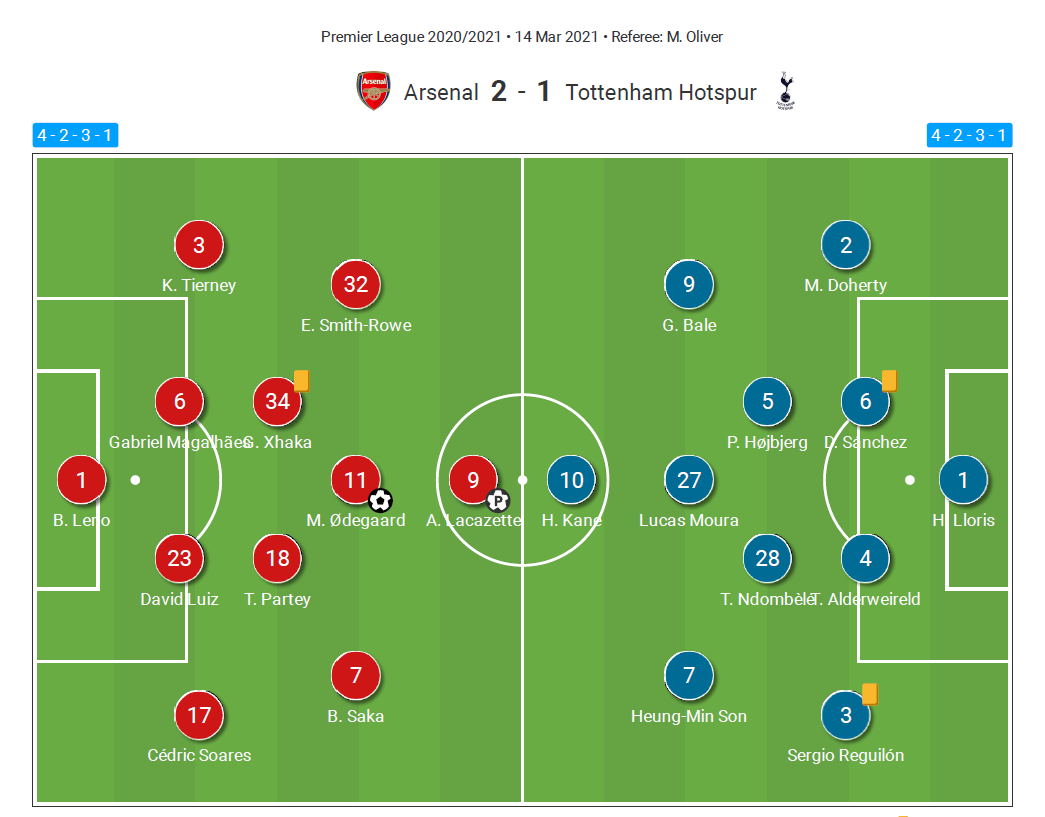 For the hosts, star striker Pierre-Emerick Aubameyang started on the bench owing to disciplinary issues, meaning that Alexander Lacazette led the line. Bukayo Saka started down the right, with Emile Smith-Rowe down the left owing to Martin Ødegaard starting in the attacking midfield position. Granit Xhaka and Thomas Partey occupied the defensive midfield spots with Gabriel partnering David Luiz at centre-back and Cédric Soares occupying the full-back spot along with Kieran Tierney.

For Spurs, Gareth Bale started again having been in good form with Harry Kane leading the line as usual. Heung-Min Son started down the left as usual and Lucas Moura occupied the attacking midfield position. Tanguy Ndombele and Pierre-Emile Højbjerg completed the midfield with Matt Doherty and Sergio Reguilón occupying the full-back spots leaving Davinson Sánchez and Toby Alderweireld to complete the defence.

Both sides had opted to use the 4-2-3-1 formation to start and with the lineups covered, we will move onto the analysis. 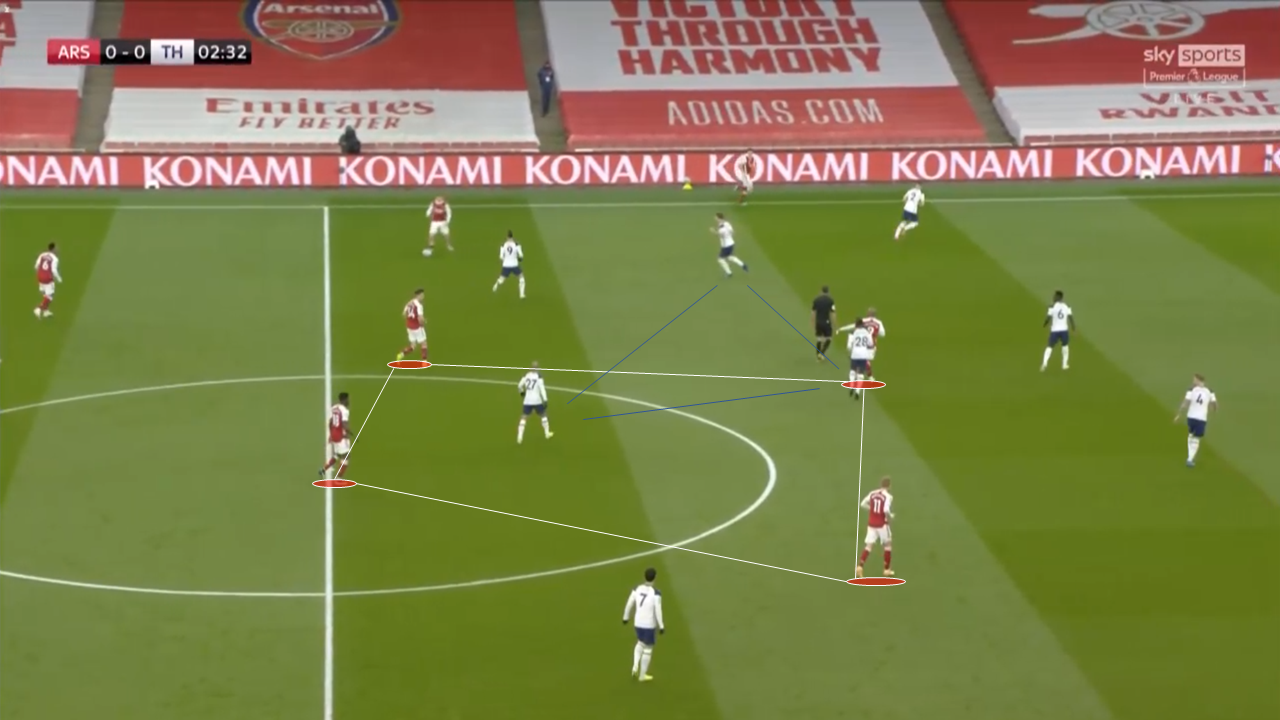 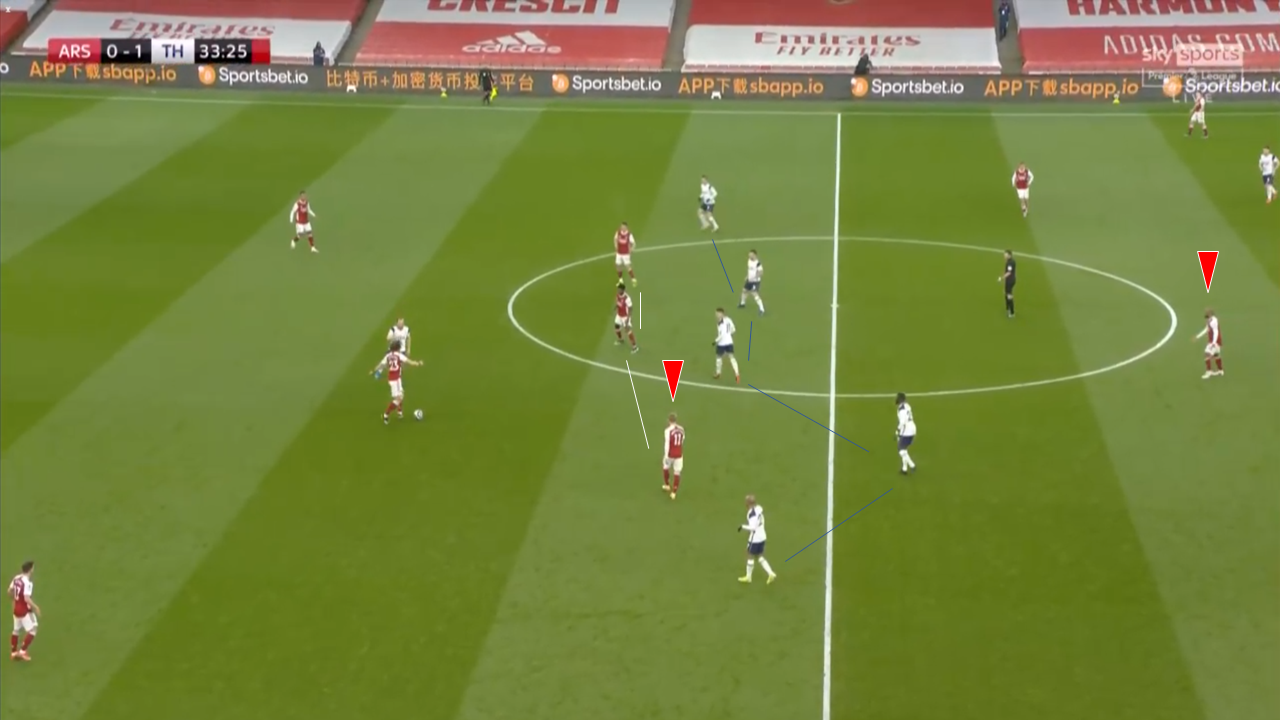 When this happened, Ødegaard would then drop even deeper alongside Partey and Xhaka and with Kane being the only Spurs player actively pressing the centre-backs, Arsenal were under no pressure in the build-up. The Spurs midfield would have to push up, in this case, to try and stop the simple ball to one of the three central-midfielders and in such cases, Lacazette could find himself in space in between the lines. However, what was perhaps more important was that the likes of Smith-Rowe and Tierney could operate much higher up the pitch in ample space.

The midfield overload had meant that Spurs’ midfield was drawn centrally to prevent being outnumbered in the middle of the pitch and in doing so, they left wide spaces open down the left-flank. 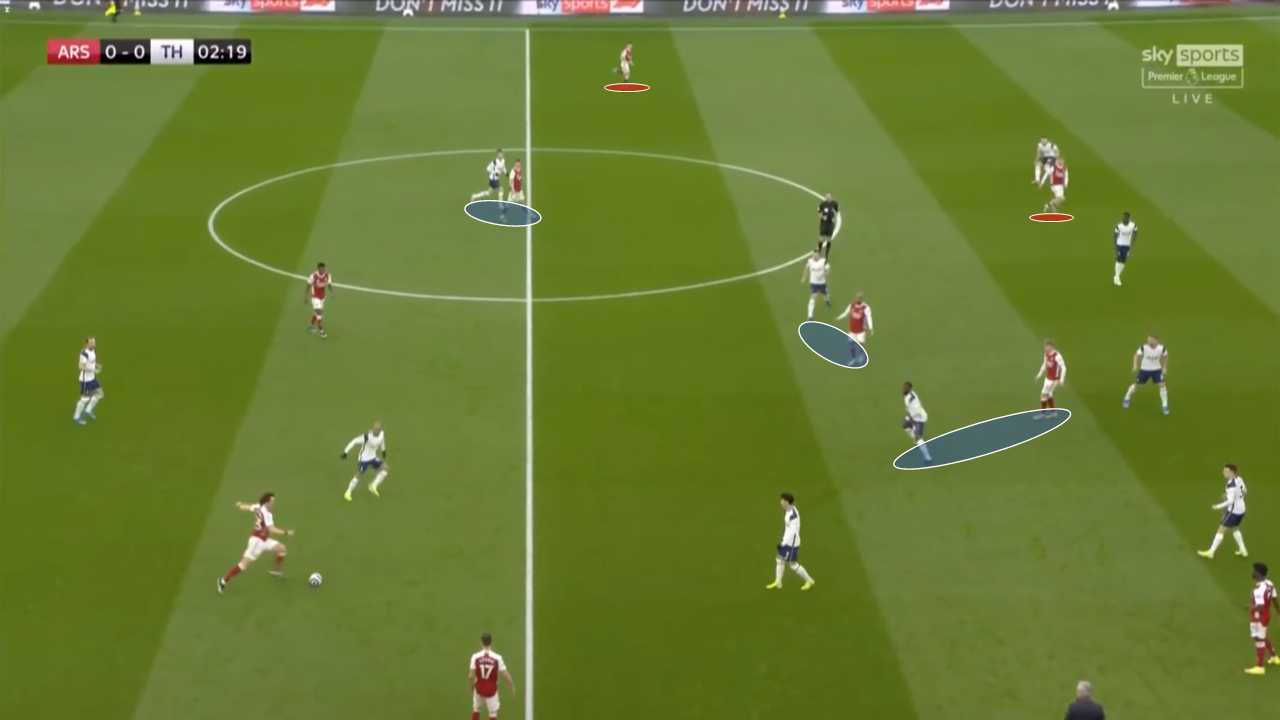 This played right into Arsenal’s hands. As mentioned earlier, Spurs did not press well, and Luiz and Gabriel could often play out with the ball and move past Kane. Then Moura would aim to put some pressure on the ball carrier with the two defensive-midfielders dealing with Lacazette and Ødegaard to block off the pass to them. Bale would move inwards to block Xhaka while Son would stay close to Soares down the flank. Now, while it may seem like there are no passing options for the ball carrier, what this did was in fact open up more space for a pass to the opposite flank.

Although Lacazette dropped deep, Smith-Rowe would stay slightly further and occupy Doherty, meaning that Tierney virtually had the left-flank all to himself. Arsenal compressed the Spurs players and drew them into midfield in order to open up a large number of spaces down the left for Tierney to run into and smart movement and play from Smith-Rowe saw them create dangerous attacks down the flank. In fact, Arsenal’s first goal came in a similar manner, with Tierney having space to run down the wing and with Smith-Rowe’s clever movement, the defender could not engage Tierney in time, allowing him to cross for Ødegaard to score. 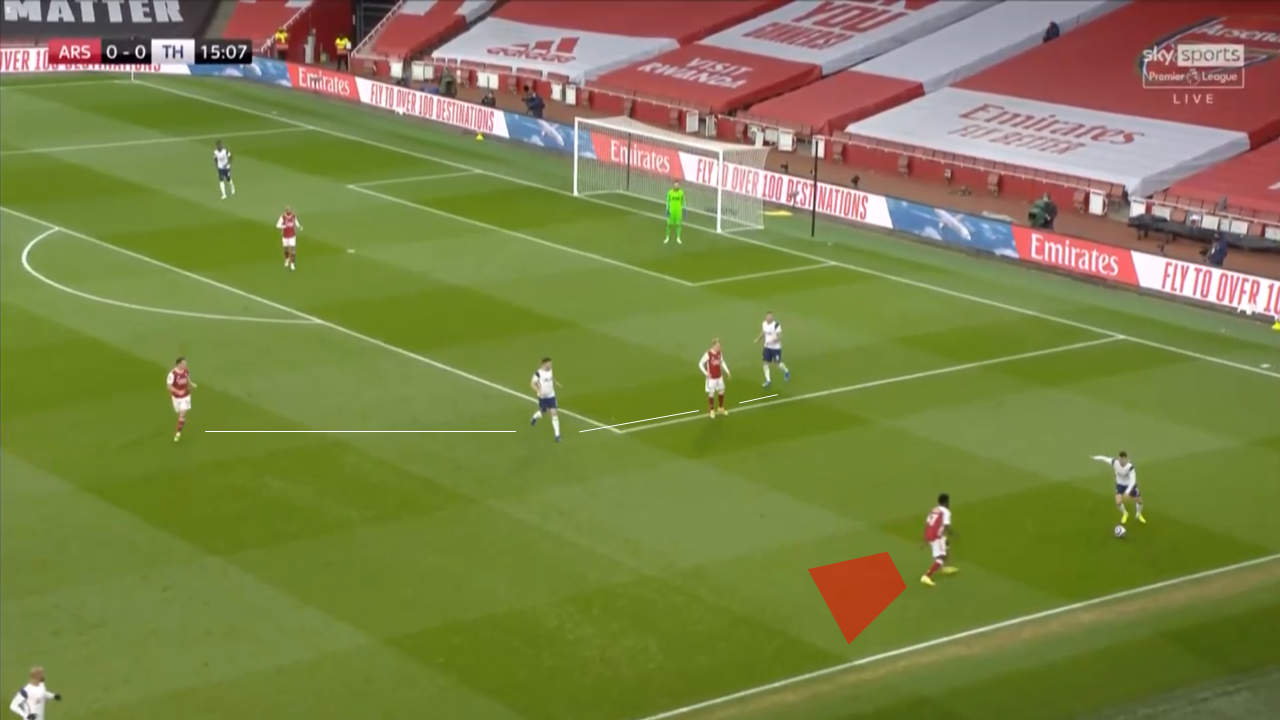 Where Spurs failed to press effectively, Arsenal seized the initiative with their pressing. They looked to disrupt Spurs’ build-up through the middle and prevent the likes of Ndombele and Højbjerg from getting on the ball and dictating the flow of play. Lacazette and Ødegaard were once again key to this, with the pair crucial to diverting the ball out wide. Both of them would push forward to close down the centre-backs, with Ødegaard keeping the defensive midfielder in his cover shadow at first. This meant that the centre-back would push the ball out wide, where Saka would keep the winger in his cover shadow while Xhaka or Partey would move forward to cover Højbjerg or Ndombele. This restricted Spurs to having to play long balls in the hope of finding their players further ahead. 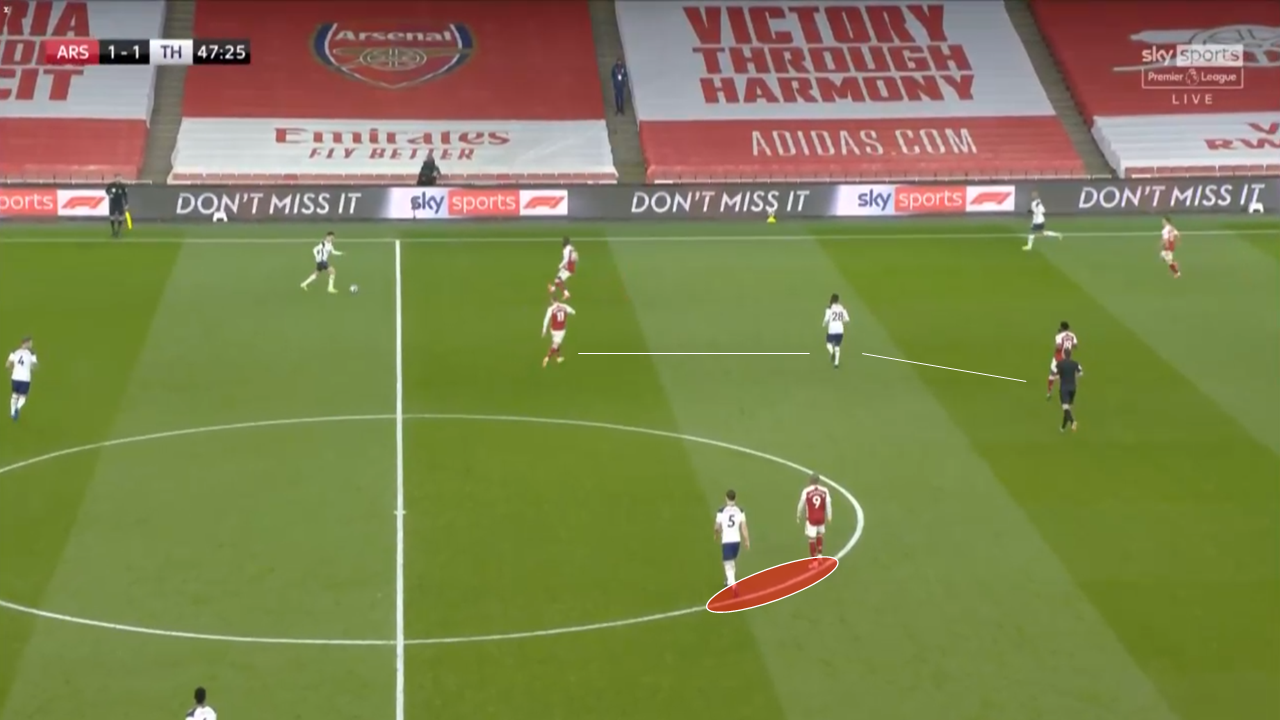 Even when Spurs did get to higher positions on the field, Arsenal’s midfield overload once again stunted their build-up through the centre. Lacazette would mark one of the defensive midfielders while Ødegaard would look to cut out the passing lanes to the other, with Partey and Xhaka close by to engage in case the pass still went through. Spurs would then be pushed to the wing, where they could be pressed easily or would once again have to resort to long passes from deep in order to move towards the Arsenal penalty area. Son’s early injury also meant that Erik Lamela and Moura would then try to swap positions in order to drag their players out of position but except for the moment of individual brilliance from Lamela to score a rabona goal, nothing much came from this for Spurs. 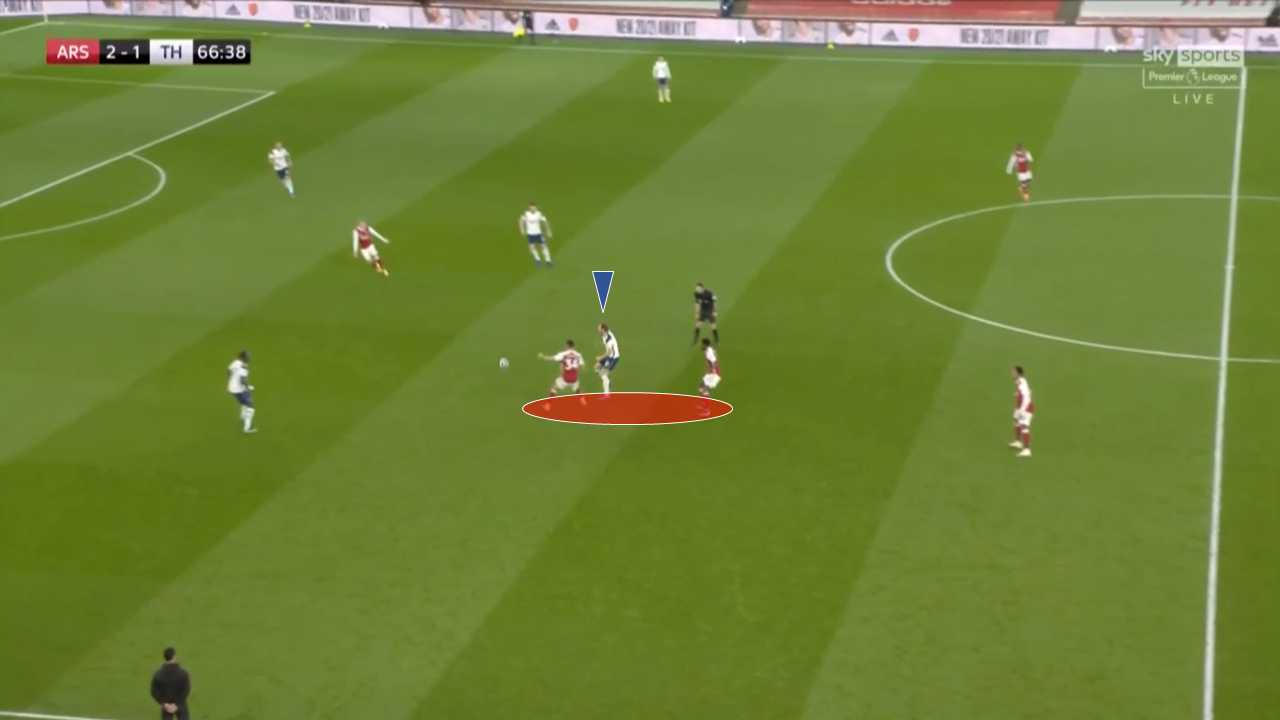 Although Spurs were, twice, inches away from equalising despite going down to 10 men, their fightback was a somewhat tame one tactically. The lack of central build-up meant that Kane had to drop into much deeper positions to receive the ball and provide some impetus but without proper runners ahead of him, he was unable to play long balls into the channels to create any proper attack. He was also quickly closed down in midfield, with Arsenal not allowing him space to turn and look for a pass, meaning that he would have to cycle possession backwards. The only form of threat that Spurs posed was from long balls to the middle, where they looked to win the second ball and attack the Arsenal penalty area. 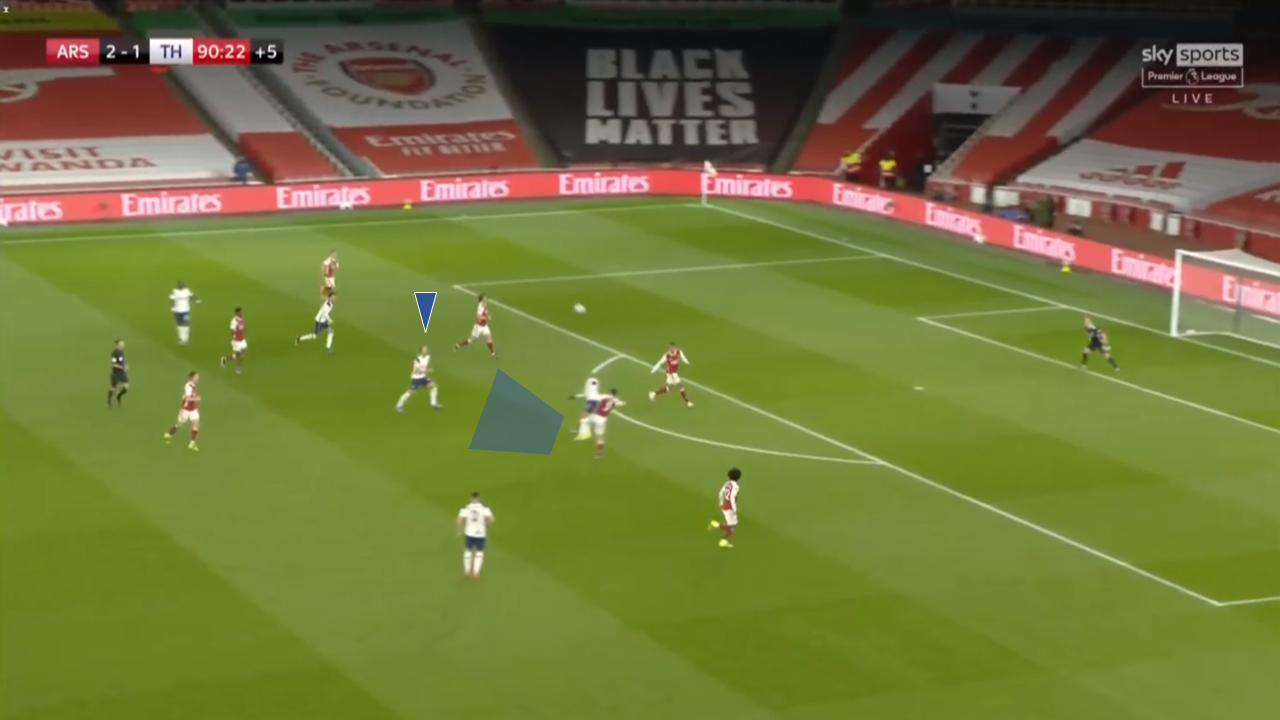 Moura would play behind or next to Kane, looking to win the header and play the ball down to the Englishman. Going a man down only meant that Spurs would be further lacking in the central areas and long balls were their only go as they chased an equaliser with the clock running down. While this was not a significant way for Spurs to find an equaliser, Arsenal did commit errors and commit fouls in dangerous areas. These were perhaps the only time Spurs looked threatening enough, with Kane hitting the post from a free-kick and Sánchez seeing an effort cleared off the line by Gabriel after a loose ball in the box at the end of a set-piece. However, with a man down and with Arsenal defending resolutely, the points stayed at the Emirates.

Spurs still sit four points ahead of Arsenal in the table, but Liverpool’s win means that they drop down one spot to eighth. They remain six points behind Chelsea in fourth but with a crucial game in hand away at Aston Villa, who sit just one place behind them in the table. As for Arsenal, they still have an outside chance of making the Europa League places if they can maintain their form heading into the final 10 games of the season. They too have a game in hand as they travel to high-flying West Ham for another London derby next week and with the Hammers knocking on the door of the Champions League places, it is surely an important game for both sides.