Manchester City had sailed away in the title race by the time they hosted their neighbours at the Etihad, aiming to regain their throne as soon as possible after losing it to Liverpool last season. Their 21 game winning streak in the league had put them 14 points ahead of Manchester United, who had slipped up in recent times. Nevertheless, it was over a year ago that United lost on the road and it was clear that either record was going to be broken by the time the full-time whistle was blown. City aimed to put the title race to bed with United hoping to close the gap as much as possible in the hope of mounting a late title push. In this tactical analysis, we will look at the tactics of both sides and our analysis will show the key reasons behind United’s impressive victory. 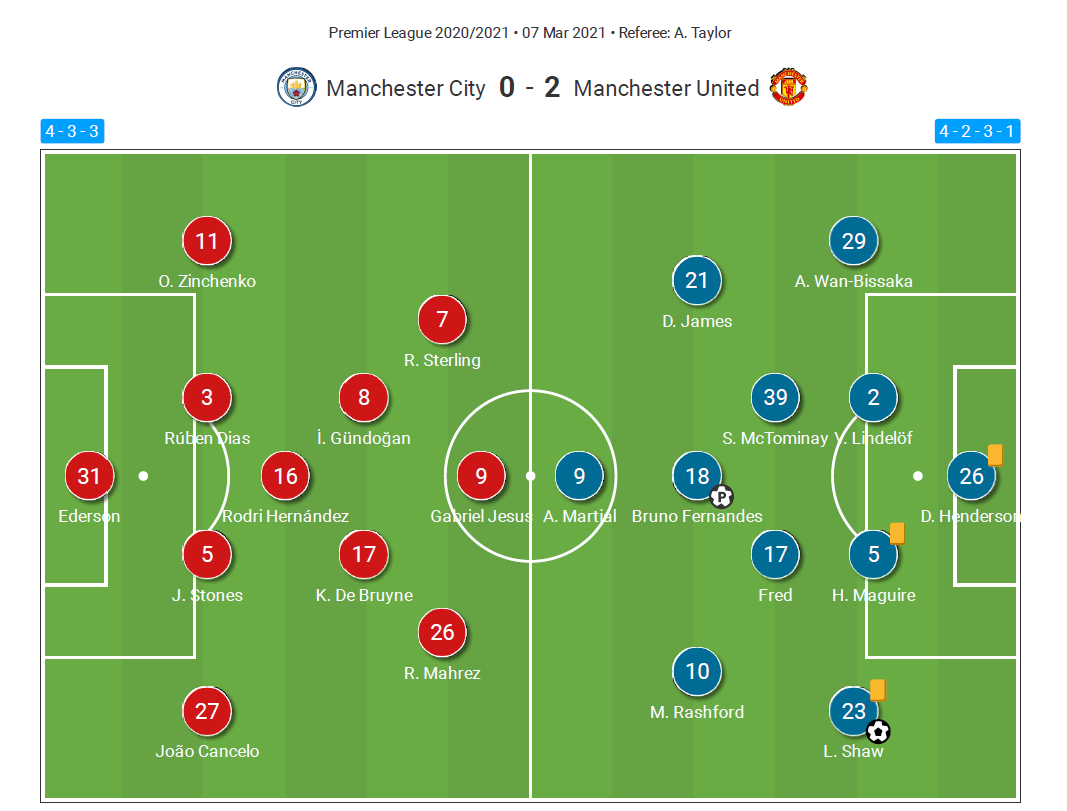 The home side’s lineup was strong, with the defensive partnership of Rúben Dias and John Stones having been outstanding this season. João Cancelo had also been excellent with İlkay Gündoğan also impressing in recent times in the heart of the City midfield. Rodri was having a good season so far as well, with the talismanic Kevin De Bruyne coming back to form after missing games due to injury. The front three consisted of Raheem Sterling, Gabriel Jesus and Riyad Mahrez, with the former yet to score against Manchester United in over 20 games.

For United, Anthony Martial and Daniel James returned to the lineup, with the latter having been on good form recently. Scott McTominay also made the lineup after missing out in the mid-week fixture and partnered Fred in midfield. Victor Lindelöf started as well in place of Eric Bailly, with Dean Henderson between the sticks owing to David De Gea’s absence due to the birth of his child.

With the lineups done, let us move into the analysis. 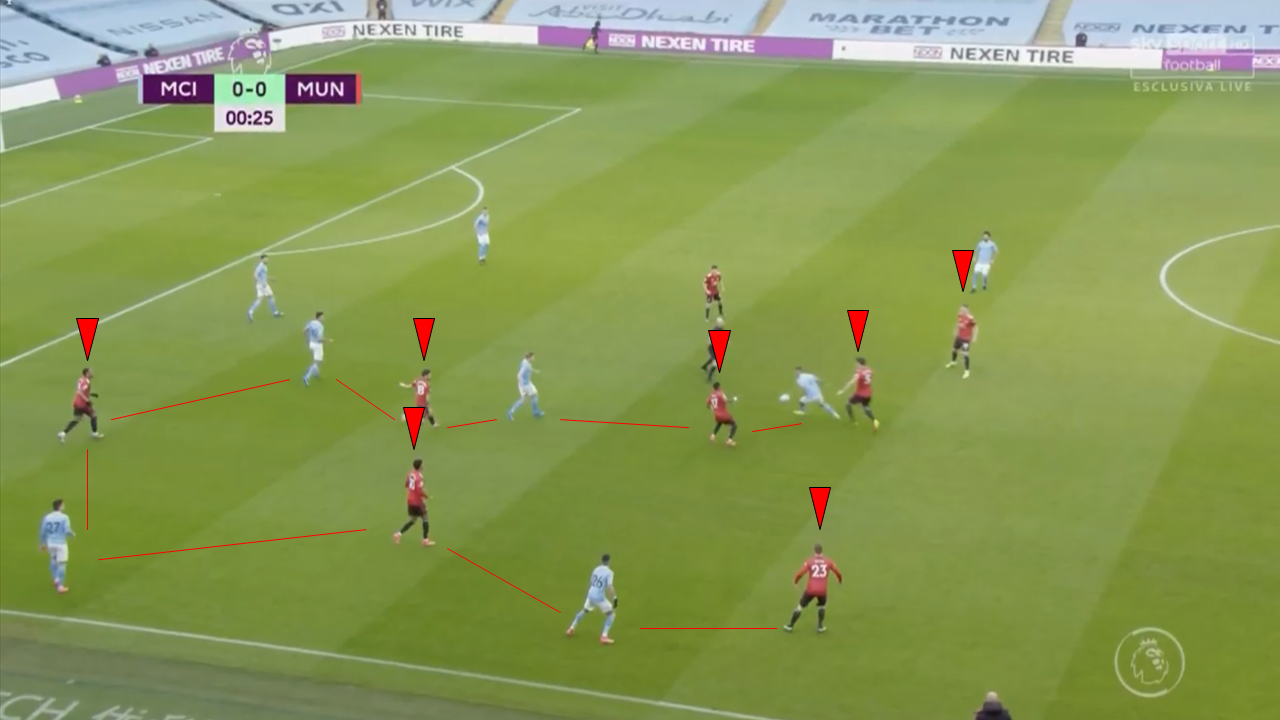 A key part of United’s tactics was to press City in the wide areas. They looked to maintain a compact structure and moved into positions such that they could close down the opposition easily. Fred and McTominay looked to stay narrow in midfield in order to stifle the likes of De Bruyne and Gündoğan while the front four could press and look to win the ball or force City out wide. This was in fact crucial to United’s early opener.

A Cancelo throw-in saw Maguire follow Jesus and actively pressure him into losing control. Fred was on hand to close down his fellow Brazilian, with the lose ball finding the feet of Rashford who could then run at the City defence. A pass to Martial who used his quick feet to move into the box then saw Jesus concede a cheap penalty in the hopes of correcting his error higher up the pitch. City rely on their build-up and progression through the centre and United were quick to pressurize them in these areas. 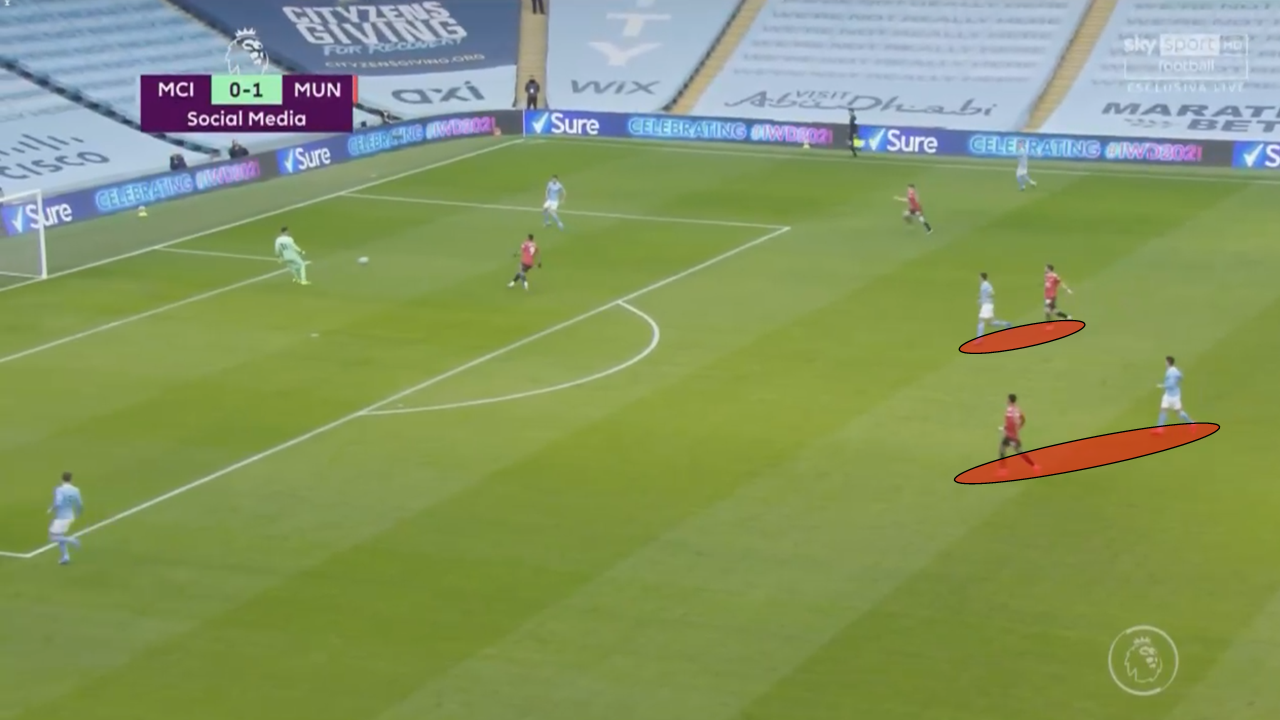 Another interesting point was United’s clever man-marking. While City usually move into a 2-3-5 on the ball in advanced positions, with Cancelo and Oleksandr Zinchenko moving into midfield, this time around it was only Cancelo who joined Rodri, forming a 3-2-5 as City looked to spread the United frontline. However, United were clever to not be dragged into this, with Marcus Rashford and Bruno Fernandes man-marking Cancelo and Rodri respectively.

James and Martial would run and apply pressure on the ball-carrier, with the other two sticking to their men to prevent City from advancing through the middle. Cancelo had been a major asset this season owing to his attacking ability and it was clear that United were looking to stifle him as much as possible. 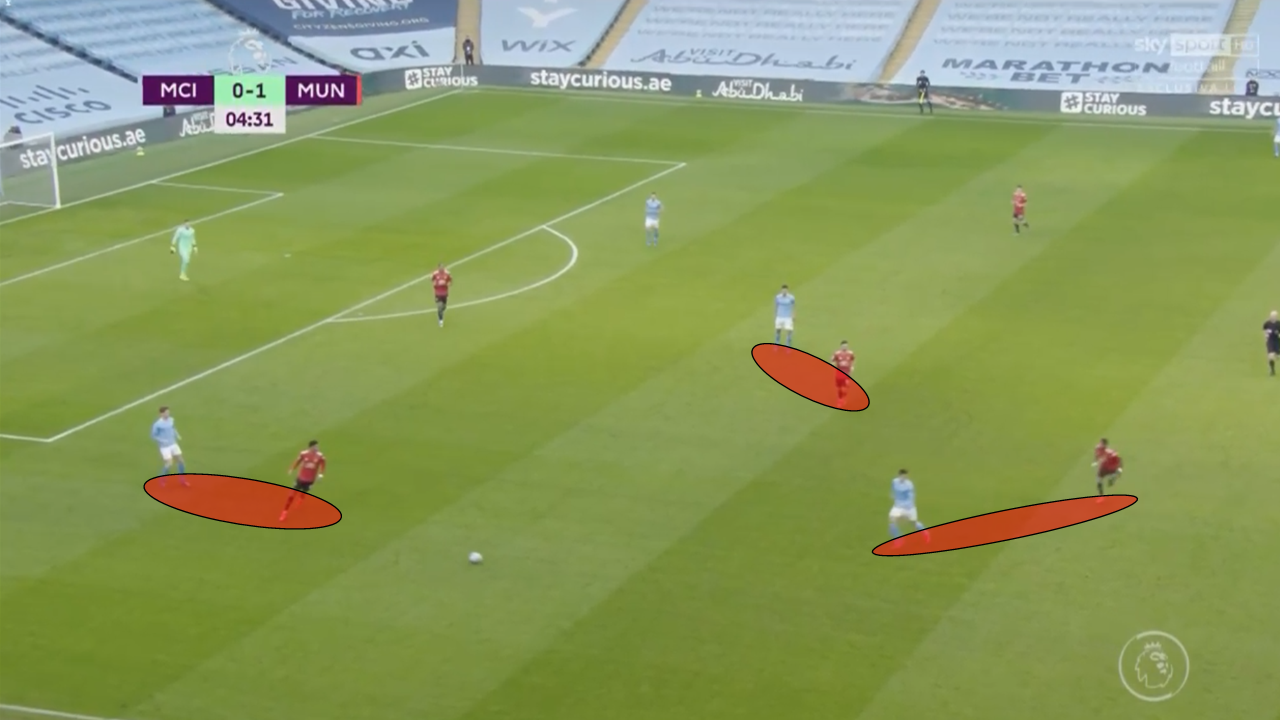 Of course, United could not always rely on only Martial and James to press, and Rashford had to move up to press Stones on his second or third touch as well to prevent the defender from having enough space to play long balls and bypass the midfield. In such a case, United made sure to not leave Cancelo as well. As Rashford moved up to press, Fred would move up in order to mark Cancelo and prevent him from find space in midfield. Should the ball still be played into him, Fred could hold up play while Rashford drops back and the two of them could dispossess the City defender. It became clear that United understood that City’s build-up and distribution to attack depended on Cancelo’s performance and midfield and instead of sitting back and defending the attacking line, United looked to nip the problem in the bud. 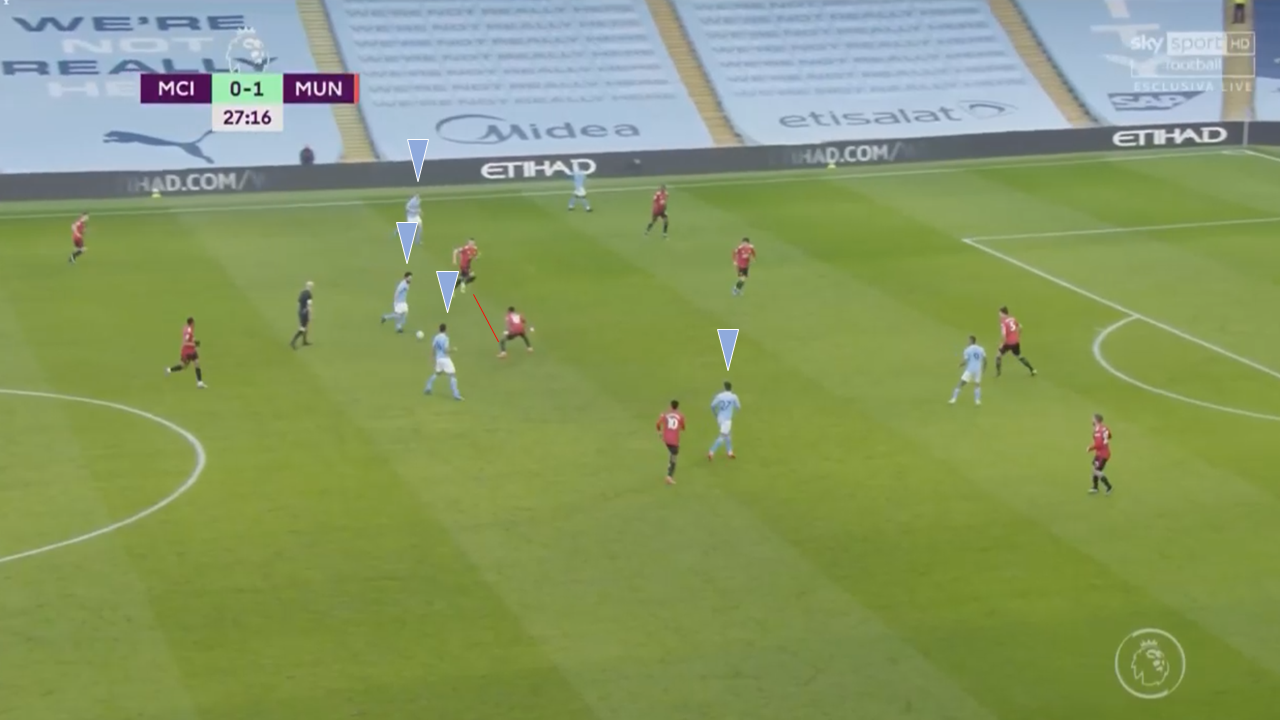 However, City still aimed to create numerical superiority in midfield, with Gündoğan and De Bruyne dropping into midfield to support Cancelo and Rodri. United often found themselves in a 4v3 scenario in such cases, with only Fred and McTominay compact in midfield with one of the front four dropping in to help them. The backline could not commit owing to City’s front three looking to run in behind and should one of the defenders commit, an attacker could find ample space to move into. 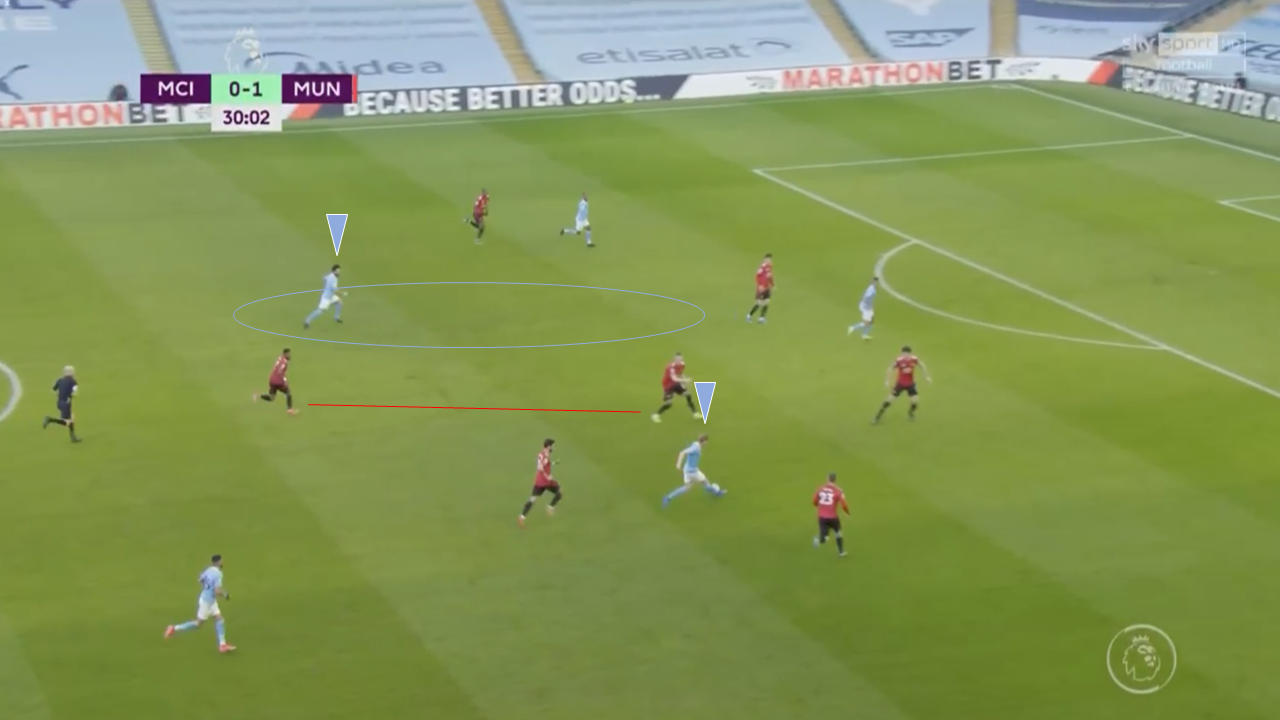 United also did appear to shoot themselves in the foot at times, with Fred and McTominay not being able to effectively pass the ball out of midfield. They were often dispossessed, allowing City to come at them quickly and finding gaps in midfield where one of the central midfielders should have been. Fred or McTominay would be caught out of position, as shown above, and the defence would have to be properly positioned to ensure that they can cut out the passing lanes.

Gündoğan and De Bruyne aimed to exploit as much space as possible in such situations but United’s work rate off the ball was impressive, with the side quickly getting numbers behind the ball and thwarting the City attacks. Although this happened on a few occasions, City were unable to capitalise. 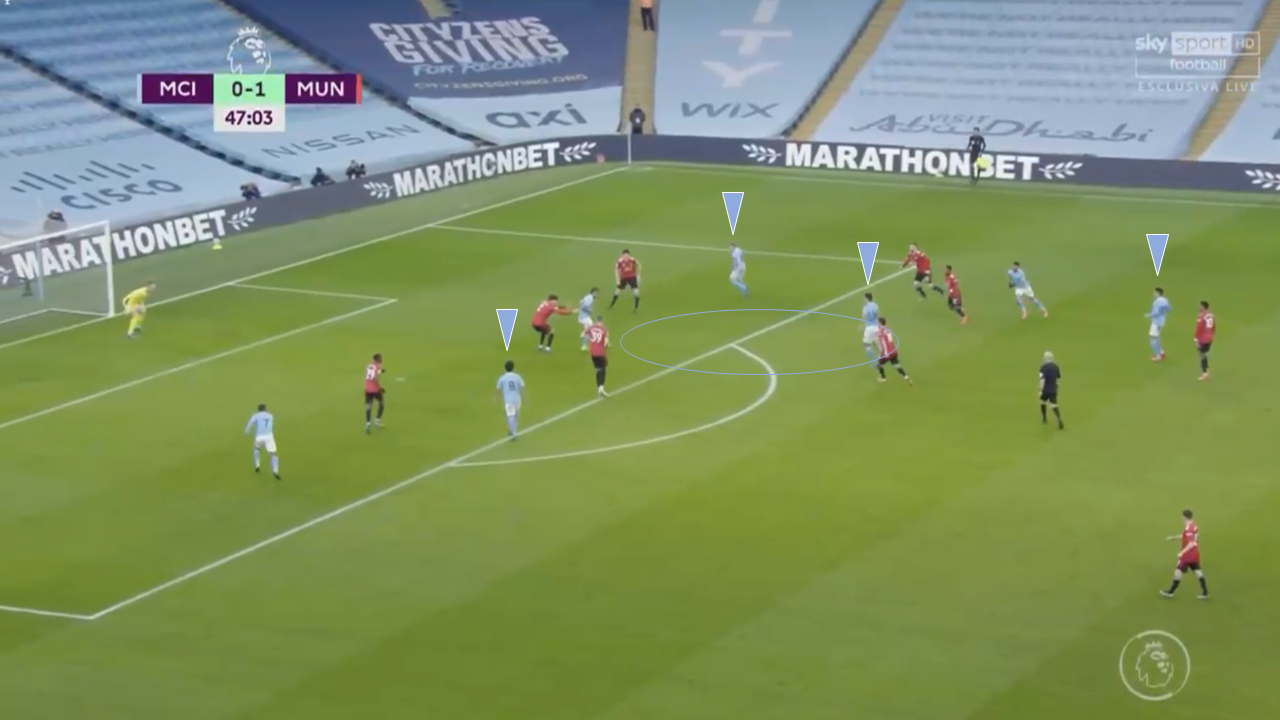 City also looked to move into very advanced positions as often as possible, with Rodri and Cancelo playing very high up the pitch. Considering that City saw the bulk of possession, it was understandable that they pegged United back, with the Red Devils having to defend deep. However, owing to the midfield superiority that City were creating, their midfielders were able to find space on the edge of the box. Admittedly, these areas create lower quality chances as opposed to playing into the box, and while United looked to prevent the latter, they were not as efficient in blocking out the former. City had a total of 23 shots, showing that they were able to put the pressure consistently on the United defence but the quality of output was shockingly low for this City side, with only six shots being on target. United succeeded in preventing City from splitting their defence and never looked fazed despite the number of attempts at their goal.

United efficient on the counter 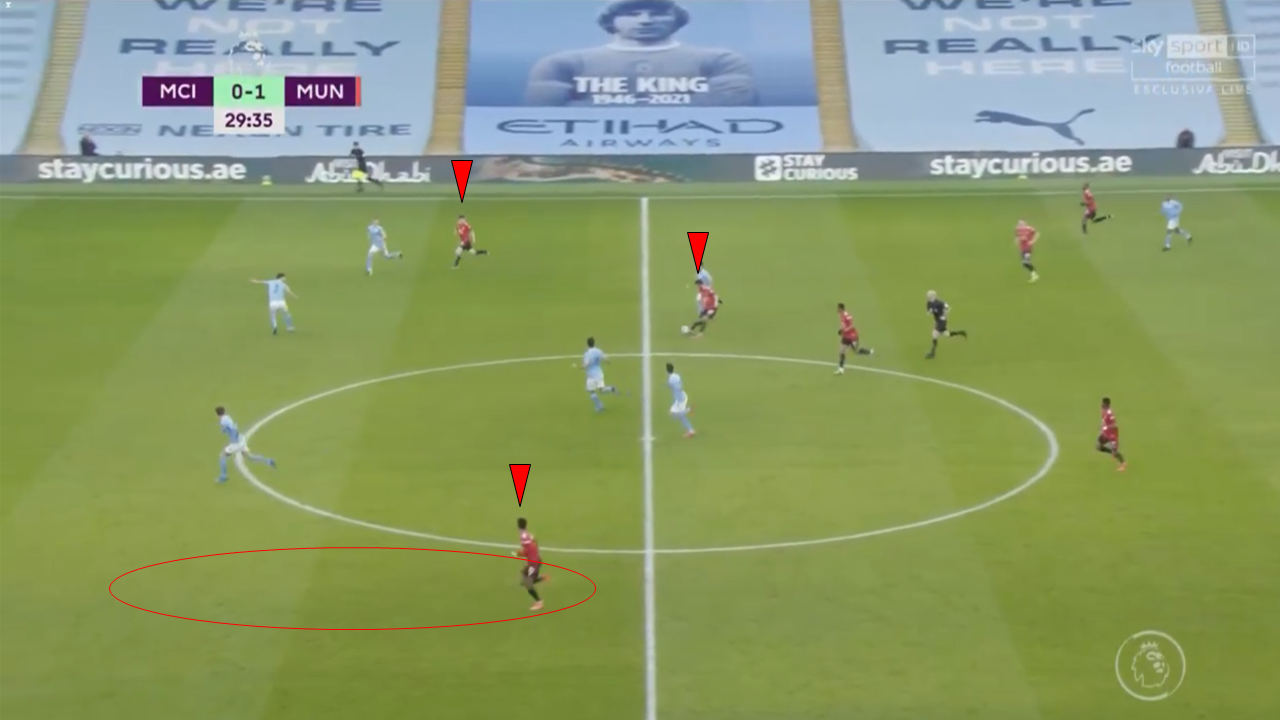 It was clear that United’s game plan revolved around hitting City on the counter, and they were efficient in doing so. Fred and McTominay looked to play the ball to Fernandes who could then showcase his passing ability to find one of the runners moving into space. The pace of James and Rashford was crucial, with Martial often dropping deep and holding up play in order to drag defenders out of position. 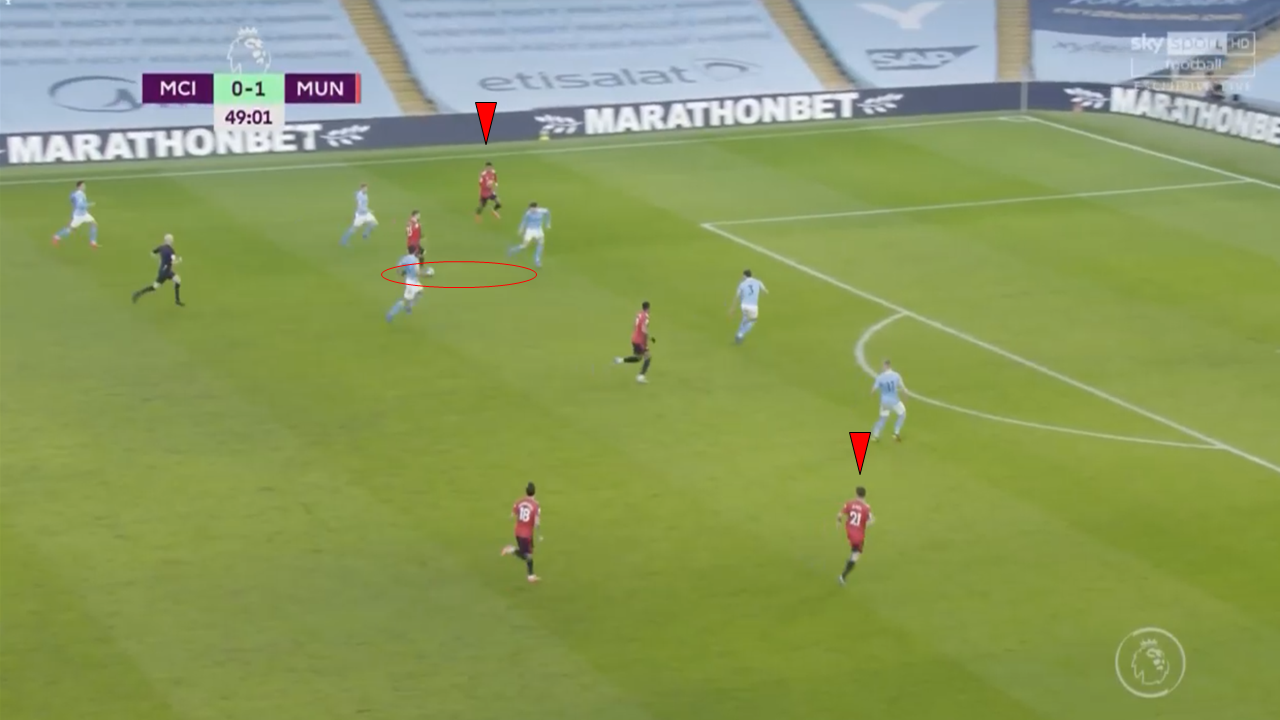 This efficient use of the counter was crucial to United’s second goal. While Luke Shaw’s run was impressive in creating the chance, notice the movement of Rashford and James on the break. They maintain their width, spreading the defence and opening up spaces in the middle for Shaw and other runners to move into. Stones cannot commit owing to Rashford moving in behind and the same goes for Zinchenko, who cannot move centrally owing to James making a blindside run.

This eventually opened up enough space for Rashford and Shaw to link up and an impressive finish from the left-back put United two goals ahead and in prime position to win the game. They had executed their plan to perfection, attacking the space in behind the City defenders that opened up with the full-backs and midfielders looking to push forward. United only had eight shots and 34% of possession, but with six shots on target, they scored twice and sealed an impressive derby win.

While the defeat means that City lose their winning streak, this should not do much harm for their title hopes seeing that they are still 11 points clear at the top with 10 games to go. The quality of the City side is excellent and any chance of a slip seems out of the question. They have had an excellent season in difficult times and barring any major issues in the closing stages, they thoroughly deserve the trophy at the end of the season.

As for United, their slip up since January has virtually knocked them out of the title race although the side has done well to find themselves in second. They would hope to preserve this position ahead of Leicester City, who are just a point behind and Chelsea, who are four points behind. Their ambitions of getting back into the Champions League next season looks highly likely though and with the Europa League and FA Cup still to play for, United would be looking to finish with some silverware this season.