Rough diamonds: Analysis of Arteta’s Arsenal in the build-up against United

On the last matchday of January 2021, Arsenal faced Manchester United at the Emirates Stadium. After picking up their form against Chelsea, they have played six unbeaten matches in a row, and successfully made it seven in this game. They are the second-best in-form team in the Premier League at the moment. As for Manchester United, they held on to second place in the table, but the loss against Sheffield United in midweek was a huge blow, combined with two more dropped points in this game, which allowed Manchester City to extend their lead at the top of the table, with a game in hand as well.

In this game, particularly in the first half, Mikel Arteta introduced a wide diamond that helped Arsenal to play out from the back. This tactic helped the team to progress the ball from the first to the second phase, bypassing the high press of their opponents, which will be the main theme of this tactical analysis.

Arsenal were without Pierre-Emerick Aubameyang and Bukayo Saka, while new arrival Martin Ødegaard came on as a substitute. However, they were still able to field quality offensive players, such as Emile Smith-Rowe as the number 10, and Nicolas Pépé and Gabriel Martinelli on the flanks.

Manchester United played their strongest lineup in some respects, with Ole Gunnar Solskjær choosing Edison Cavani over Anthony Martial as the striker. Paul Pogba was moved wider as the left-winger, and Marcus Rashford played as the right-winger.

United pressing high and the trap

United have pressed in a rigid man-oriented system earlier this season, but it seems as though Solskjær has changed something recently. Instead of sticking to the old plan, they tried to cover specific zones to guide the ball into traps on most occasions.

When they pressed high, instead of going man-to-man, they left the centre-backs and goalkeeper for Cavani to cover. Then, Bruno Fernandes and one of the United midfielders covered Thomas Partey and Granit Xhaka. The benefit of this arrangement was to leave one of the United midfielders deeper to cover areas behind the pressing block. So, when Fred went higher, Scott McTominay could provide support by staying deeper, and vice versa.

The below image shows Cavani chasing the ball and cutting the passing lanes after the first pass was exchanged between the centre-backs. From here, Arsenal had no way back to the other vertical half of the pitch, and were forced to go out wide with the United players pushing onto them. Fernandes did his job to stick tight to Partey as well. 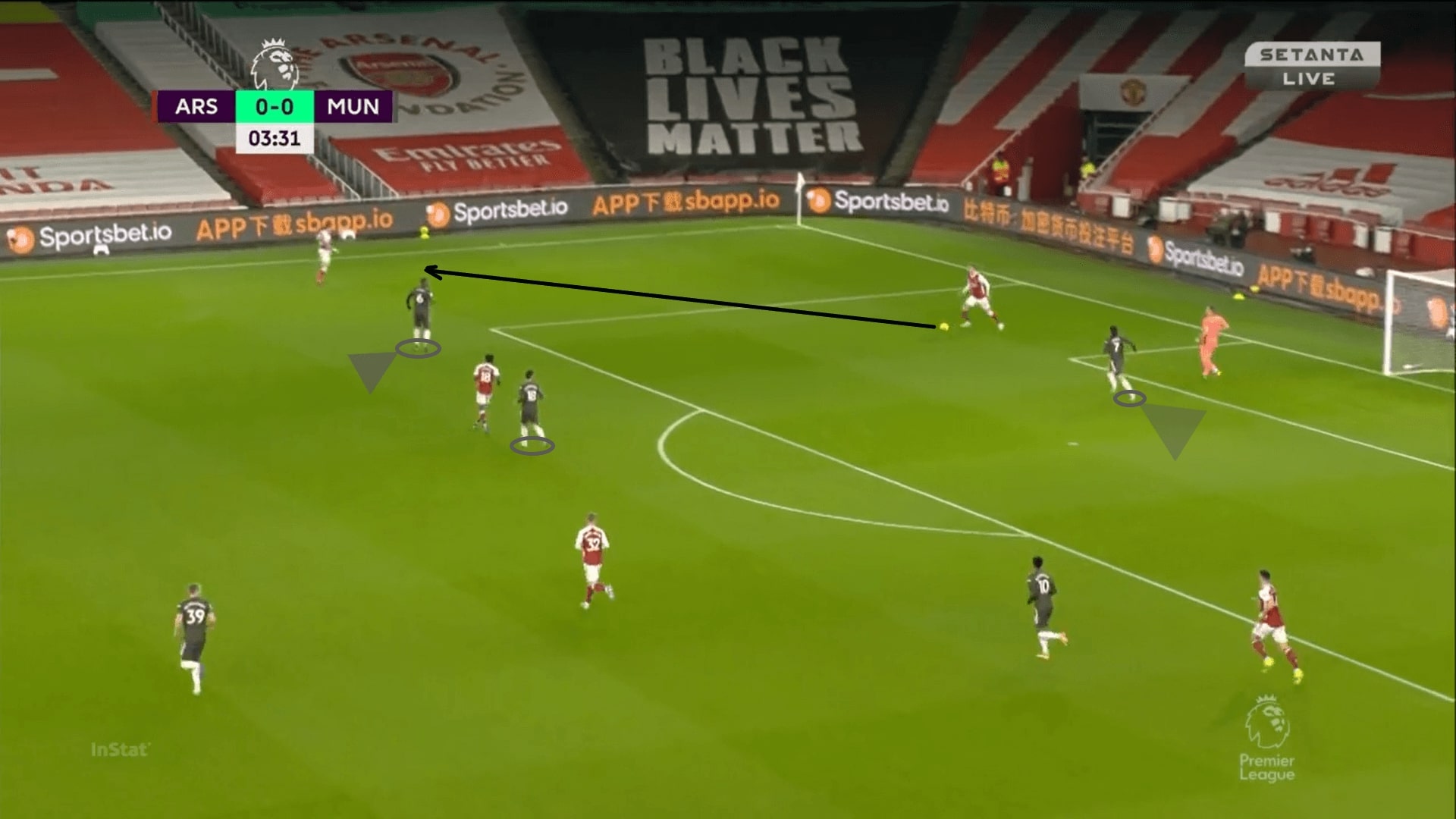 The positioning of the winger was the key to guide the opposition into traps. He needed to stay narrow, in the half-spaces to close the vertical passing channel. Then, the centre-back is likely to play the ball out wide with the full-back as a supposed free target.

Pogba did this job, and lured Rob Holding into finding the right-back, which was the trap being created by United.

When the right-back received the ball, the lateral option, Partey, was unavailable because of Bruno’s man-marking. A return pass to the centre-back was not possible either since Cavani was already there. Then, the right-back would have to try to find the right-winger vertically, as this was the only viable option. 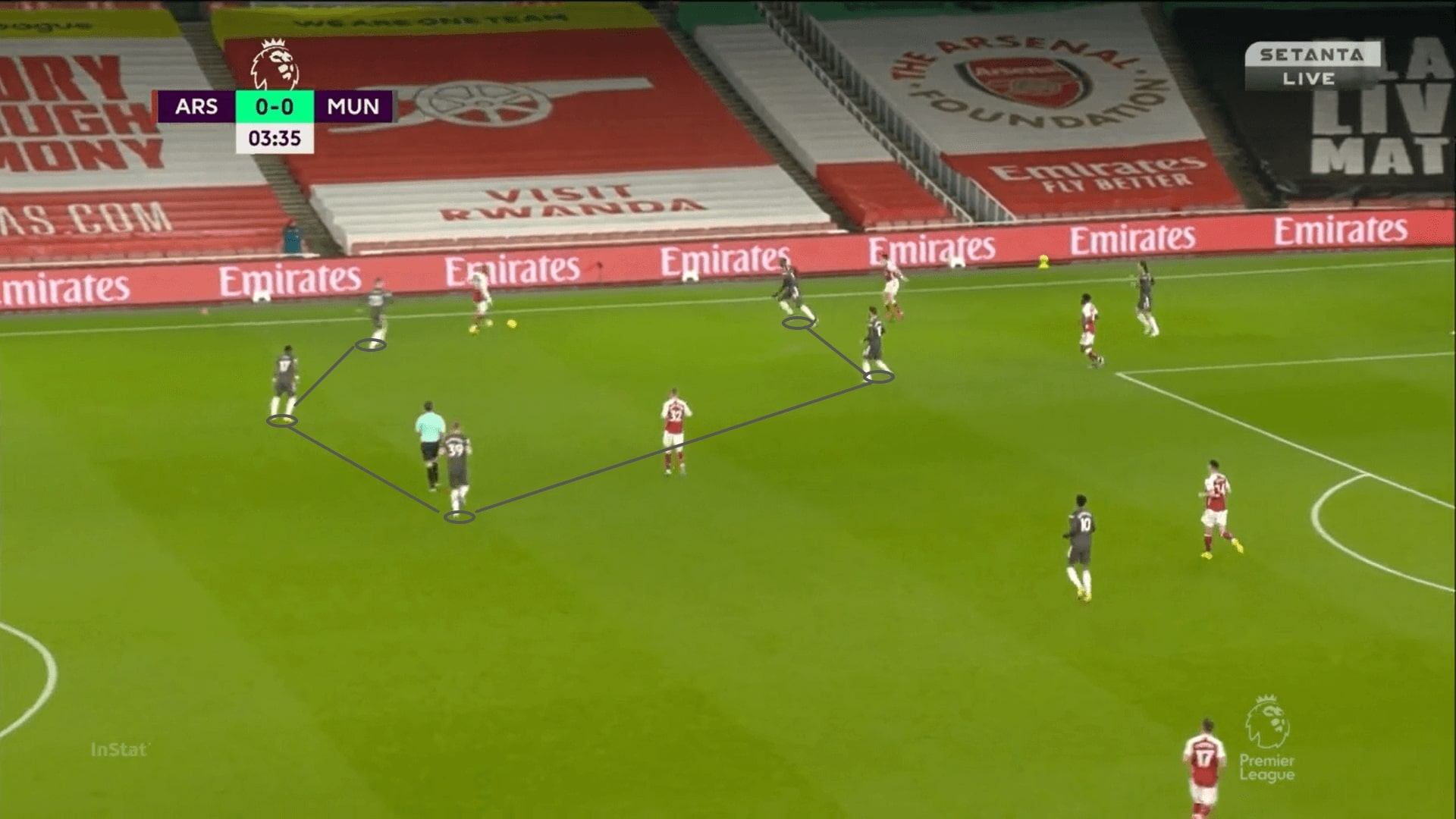 This would trigger United’s trap, as they looked to congest that wide zone through numbers and by pressing the closed body of the receiver. We will explain more on this from an Arsenal perspective below, but what the Red Devils did here was to compress space and win the ball back in such situations.

The wide diamond of Arsenal

However, despite having a good game plan, United’s press was not good enough. For example, United did not put continuous pressure on the ball, while another area that could be improved was in the spacing of the press – sometimes they were defending large areas and arriving late to put pressure the ball. Sometimes when Fernandes joined Cavani in the first layer, the midfielders behind were forced to defend a lot.

In some situations, United set the block too low, allowing Arsenal to play at their own rhythm, and this was how the Gunners attacked with a wide diamond.

One of the advantages with a diamond is the number of passing options offered around the ball. Usually, teams play with this shape in midfield, which you could refer to as a 4-1-2-1-2 formation but the same can happen in wider areas as well. Apart from the two diagonal options around the ball, an option at the vertex, which formed the diamond, is the key to progression. It ensures that this player is behind the first layer of the opposition’s press, and the player could pass vertically if the defence chooses to close the wide players. 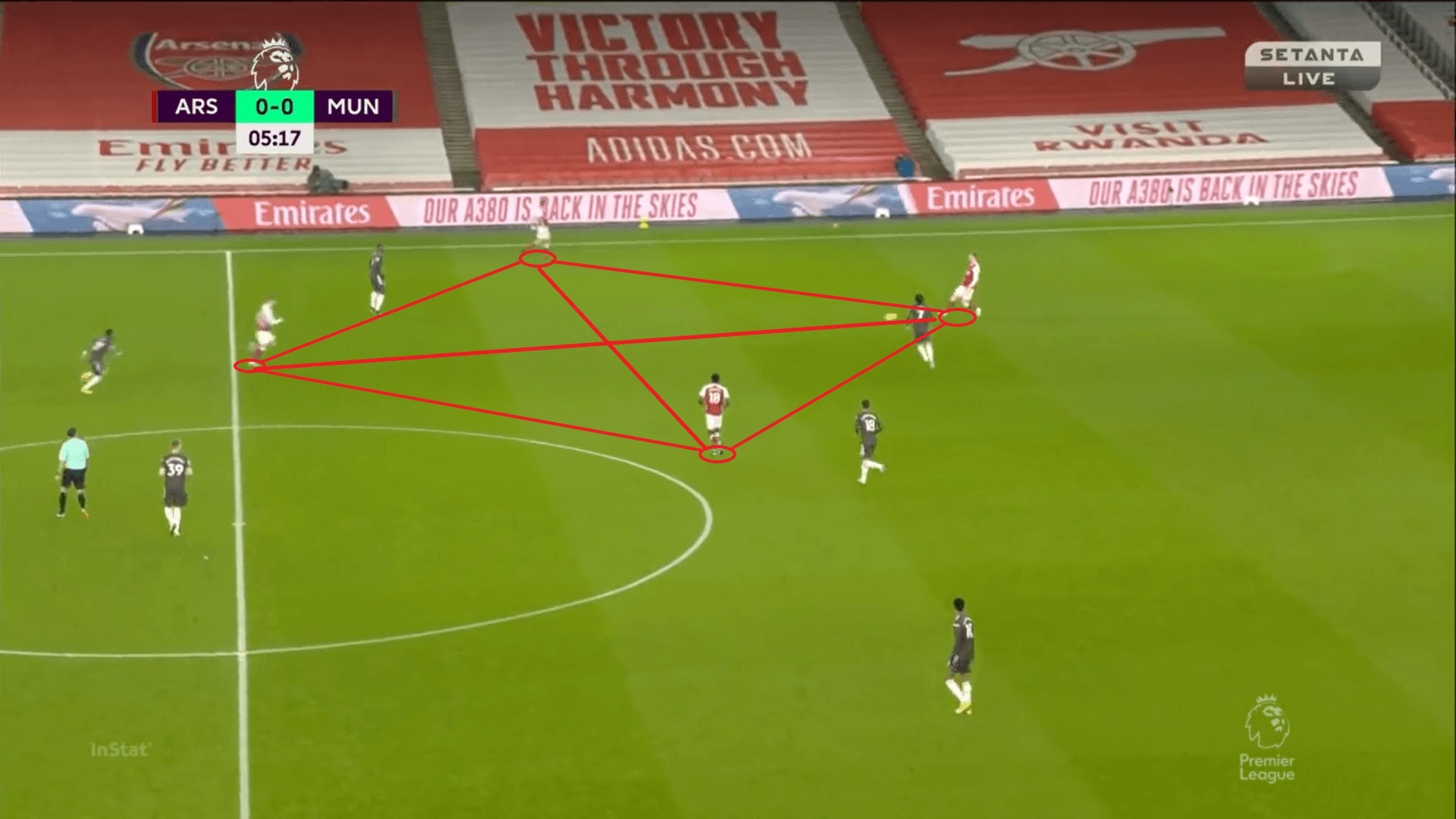 Arsenal’s diamond was often created on the right, formed by a centre-back, the right-back, the ball-near midfielder, and the tip, which could be the striker, the winger, or the offensive midfielder.

The above image shows the structure, which was fully constructed as United pressured the ball too late, giving the hosts time to open up through this shape. You can see the number of triangles that have been created through this strategy, and there are a number of passing options due to the spacing and distance between players as well.

In the first half, Smith-Rowe, the attacking midfielder, usually dropped deeper as the free player to form the tip of the diamond. Fred was not tight enough to restrict his movement, while Pogba somehow oriented himself towards the right-back, and Cavani was late in pressuring Holding, allowing a vertical pass to be played. 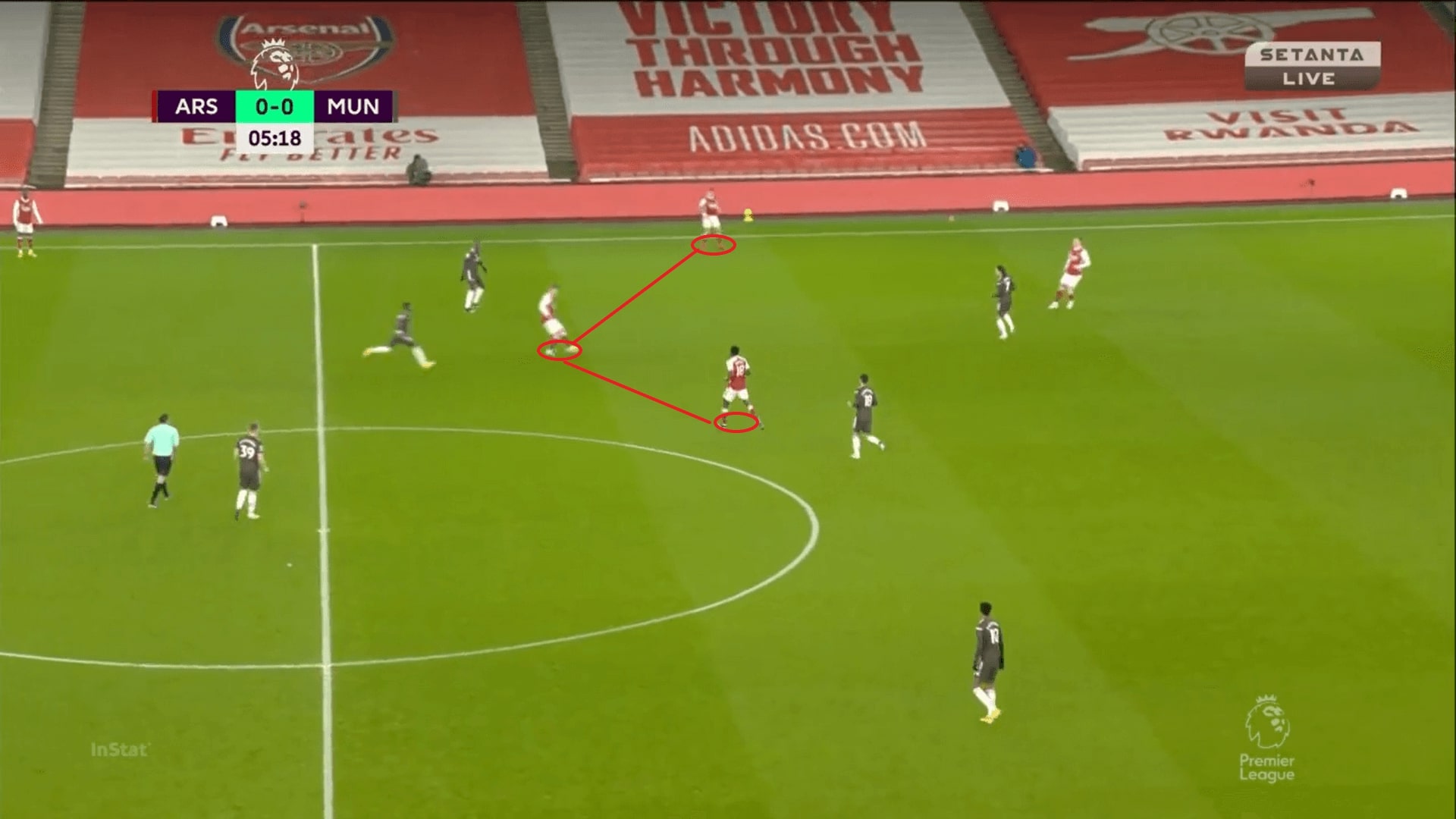 Even though Smith-Rowe dropped with a closed body shape, this diamond structure helped him to find the third man (Partey in the above example), and there was more than one third man. Here, the 20-year-old midfielder could go right or left to Héctor Bellerín, and United would not know until the pass was played.

Another possible variation was the right-back going up simultaneously with the vertical pass – then, when Smith-Rowe received, he could be released behind Pogba. 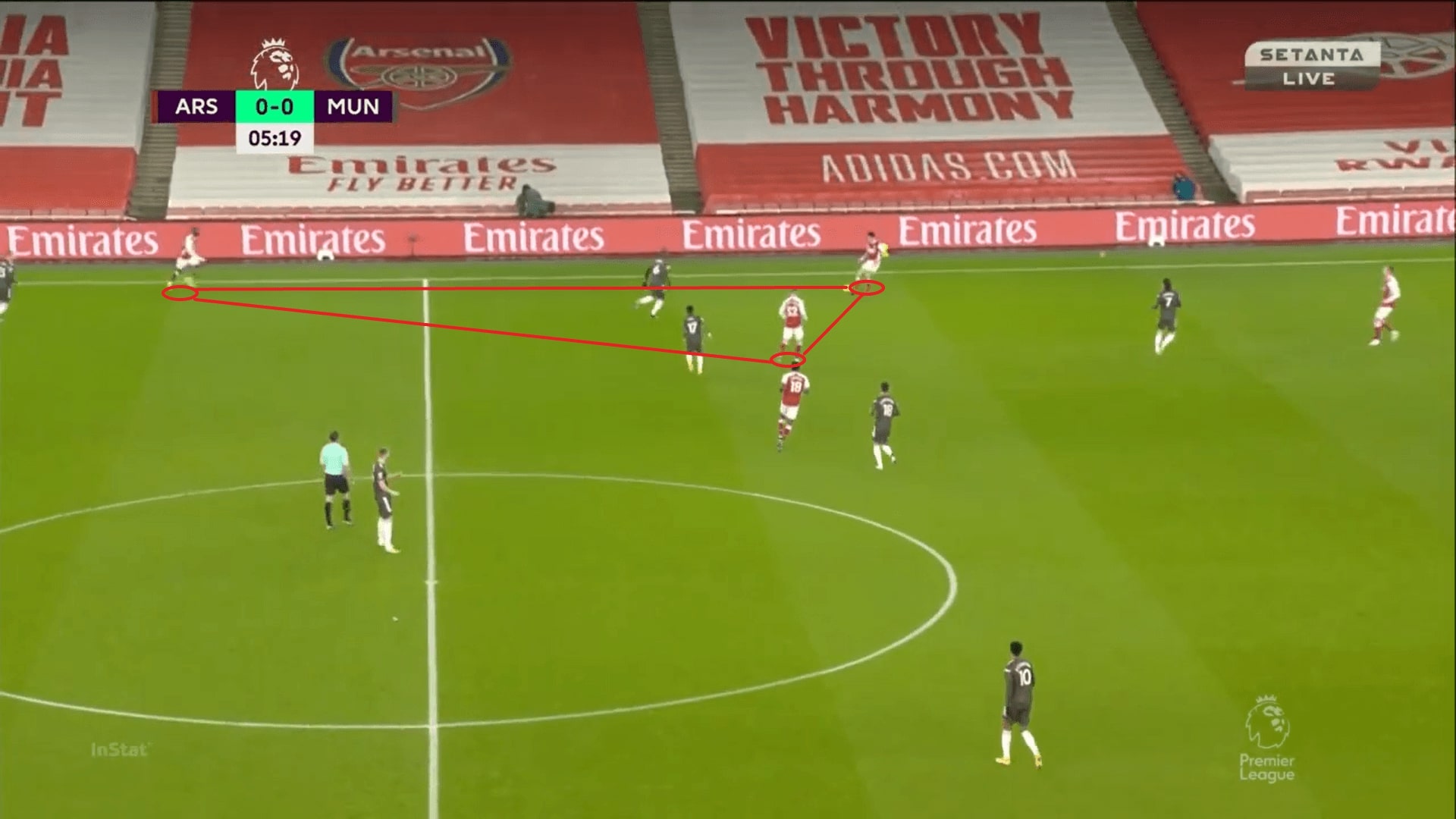 Arsenal were able to keep the right-back and defensive midfielder in front of the second layer with no issues. It was also possible to add additional elements on top of the diamond, for example, with the winger.

Now, the right winger appeared on the right flank, when Bellerín returned the ball to Smith-Rowe, and thus became the next option for a pass. This additional player formed an extra triangle, so actually Arsenal were attacking in two shapes. With a simple pass and movement, they were in the offensive third. Fred was not doing enough to limit the impact of Smith-Rowe.

If the dropping player is left-footed, like Smith-Rowe, he should be able to go central and find Partey with a pass with his stronger foot. 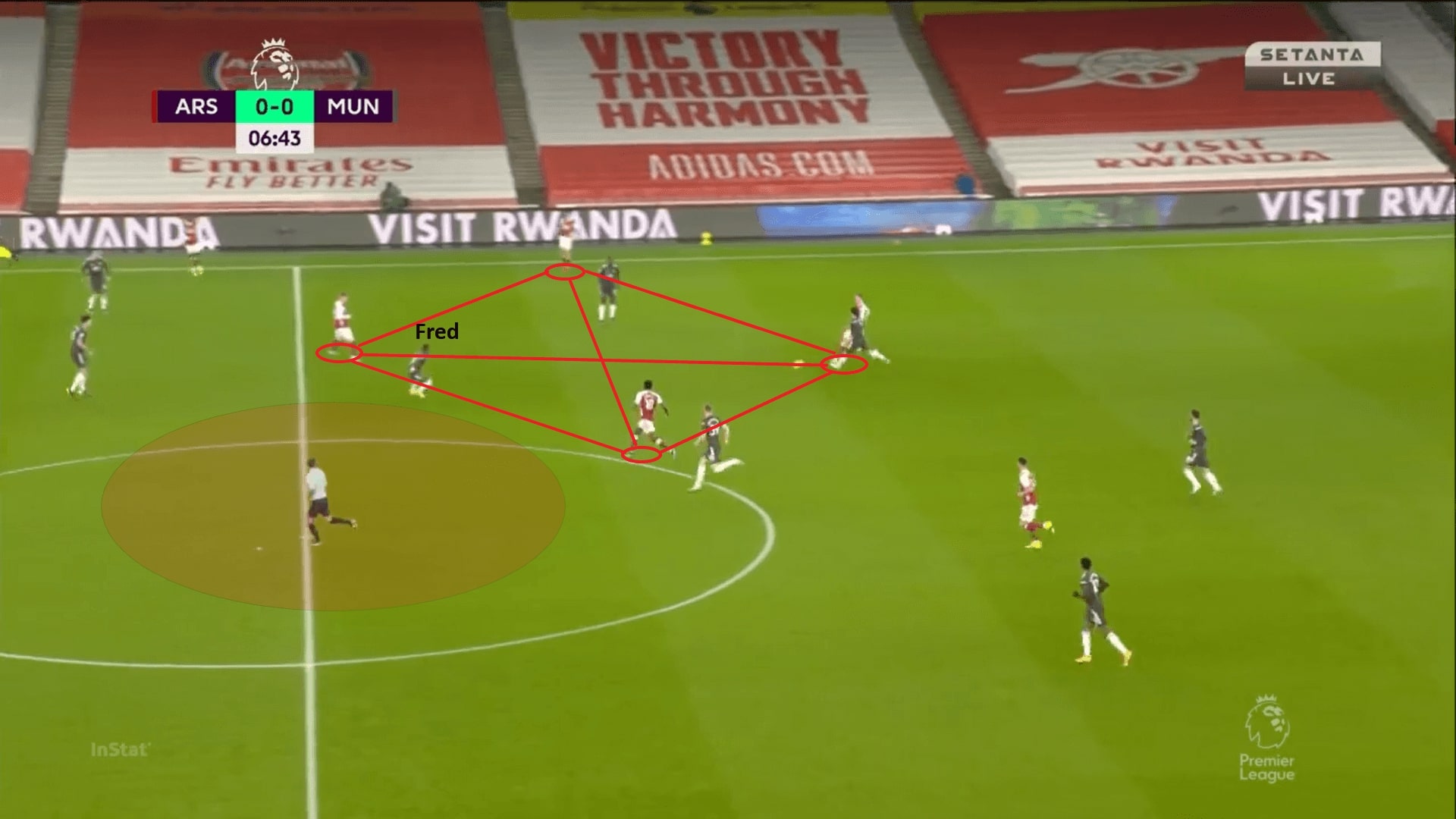 Another example here, where we can see how the diamond also worked with the strengths and traits of the players involved. The wide options in the structure, especially Partey, were strong at ball progression and running with the ball. The home side could use this ability to advance the attack into the second phase.

Once again, we see that Cavani did not put enough pressure on Holding. Credit should be given to the central defender as well since he had the courage to bring the ball forward, and not kick it away early, which would have disrupted this shape.

In this case, McTominay and Fred went to the same option, while Pogba once again covered the right-back. This meant even a 3v3 was favourable to Arsenal, since the vertical channel was opened for the pass. 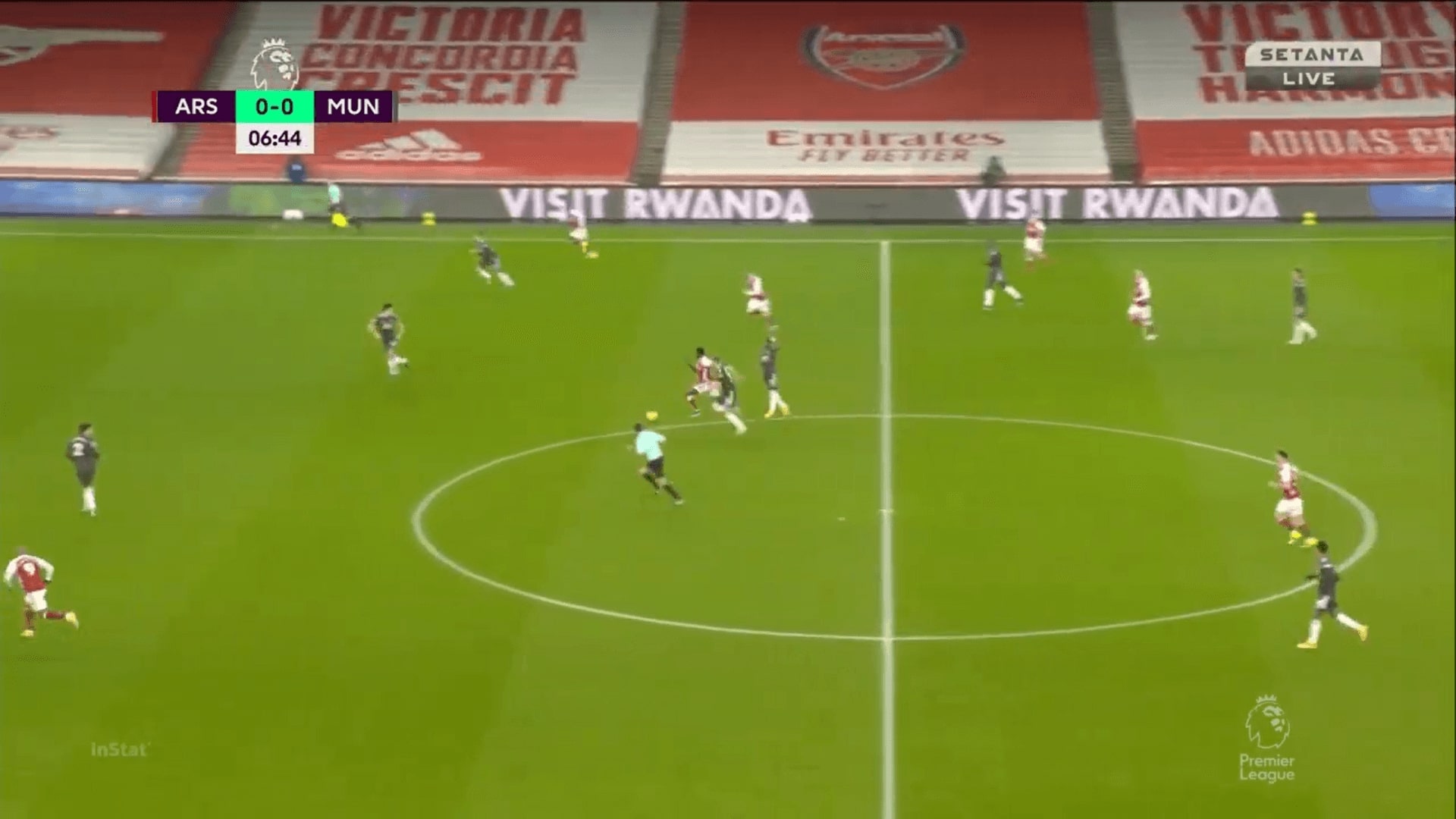 Smith-Rowe was clever enough to maximize the dynamism created through the diamond. Playing the ball to the right-back was good, but laying it off to Partey was even better. The €50m signing was good enough to synchronize his movement with the pass, fixing the positioning to offer himself as the third man.

United did not defend this situation well. Partey was able to use his physique to separate the opposition and the ball with his body, and he is good at running with the ball. When Partey received possession, Arsenal were able to get behind United’s pressing players, and then directly run at the back four.

However, one thing that Arsenal did not do well enough was in the quality of their final pass. For passes in and into the final third, they were disappointing at times, killing the momentum of attacks. For example, Partey soon gave the ball away when trying to feed the ball to a runner. 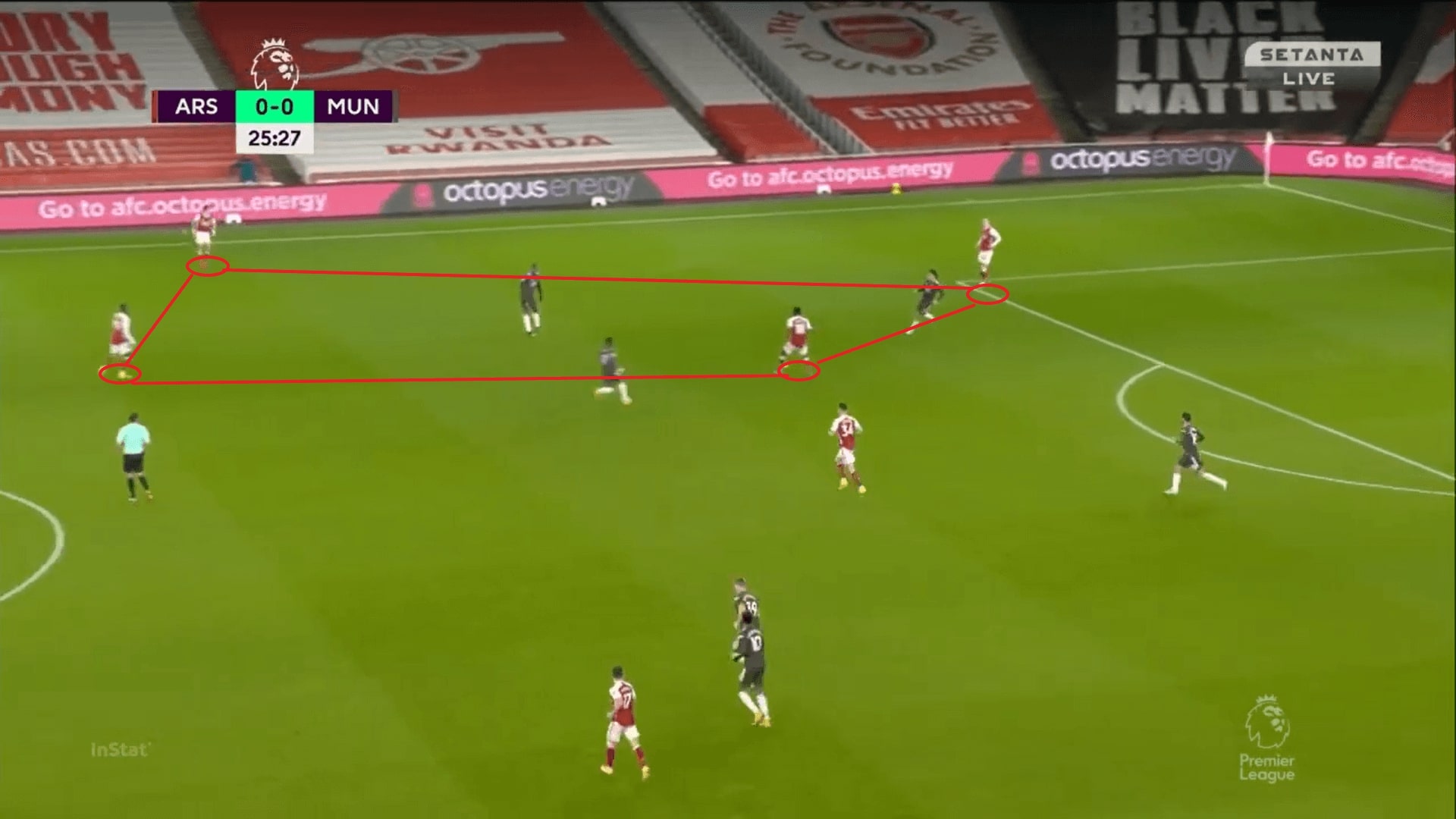 The positioning of the Arsenal players was good enough to give United a difficult task. Without pressure from Cavani, Holding could play a vertical pass, which could catch out United. In this case, he found Partey with a diagonal ball.

Arsenal were capitalizing on United’s spacing issues when Fernandes joined Cavani in the first layer, and thus Fred or McTominay needed to step up to cover Partey. Given the spacing issue, United’s pressure was always late. Although Pogba did block the passing lane between Partey and Bellerín, it was impossible to stop the pass to Pépé, who dropped off the backline, unless a centre-back joined the press in the opposition half. 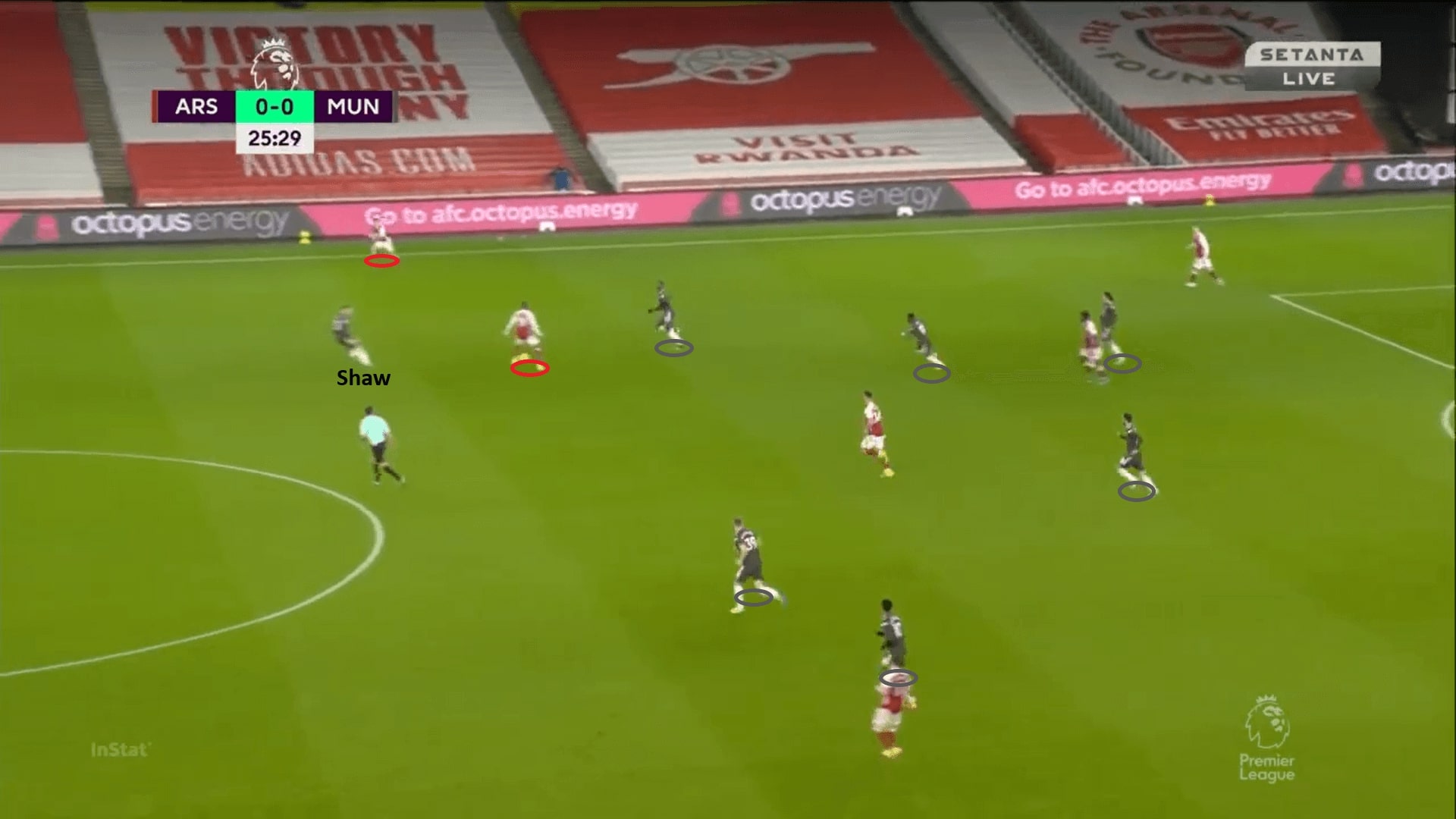 Instead, it was Luke Shaw, the left-back, who was left to deal with Pépé. He was in trouble as Arsenal had a 2v1 numerical overload behind the press. The spacing issues always resulted in late pressures, and United were not able to stop the pass out as well as a result.

Arsenal were able to get into the final third by using the wide diamond to advance quickly again, but once again, the final ball let them down. 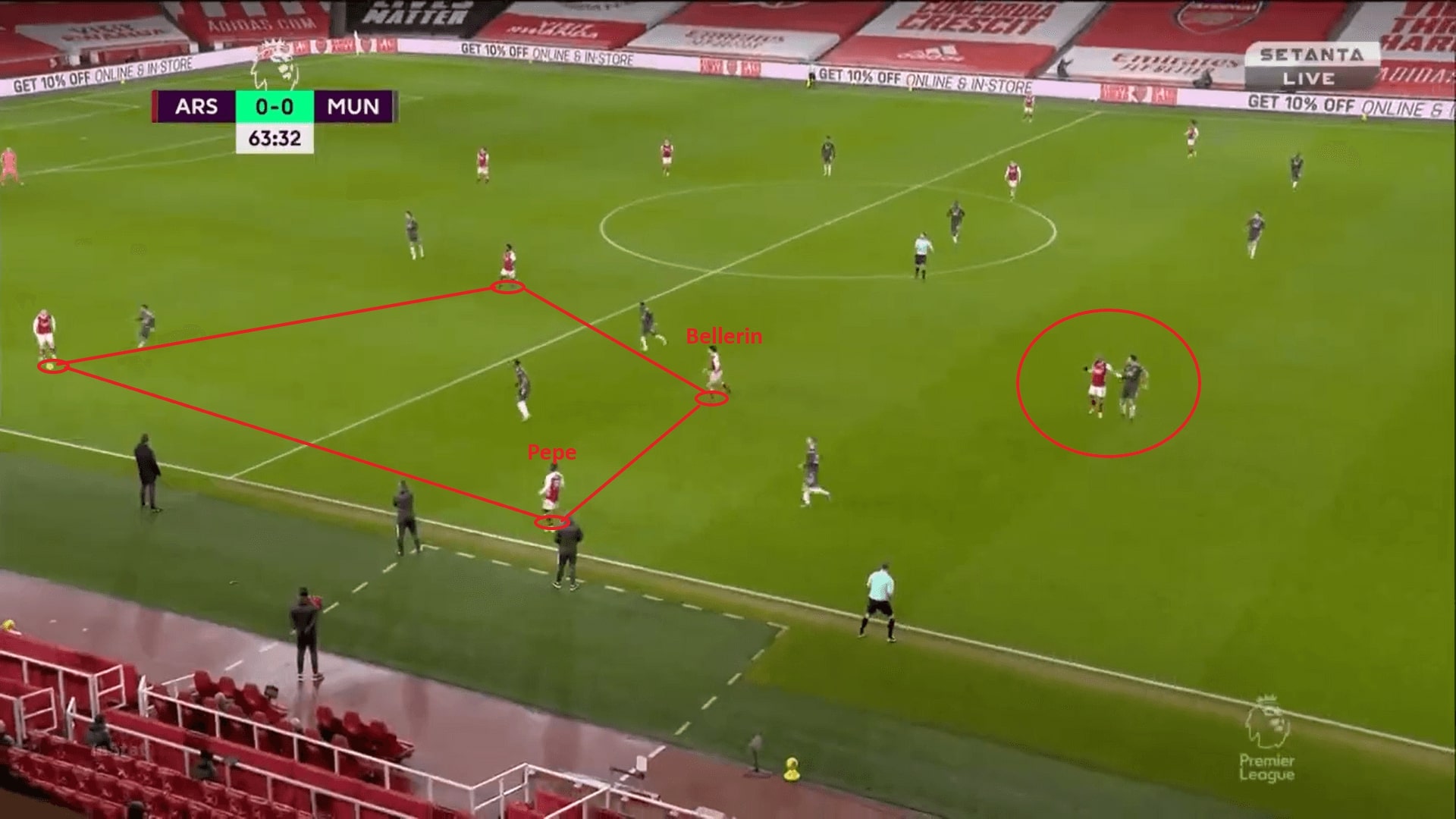 The diamond also saw rotations, so sometimes you would see the right-back providing the vertical option, for example, rather than the lateral option. The structure was the same, with Pépé out wide. However, Pogba positioned himself better here, since he shut the vertical channel to Bellerin, leaving Pepe to Shaw. Compared to the previous examples, United did much better here in shutting down the vertical option for Holding.

However, with the left-back stepping up, it meant that Alexandre Lacazette was now able to isolate Harry Maguire in a 1v1. Holding could directly skip the second phase and put the ball in the final third with one simple long pass into the space, and this resulted in a free-kick gained in a promising position.

In this analysis, we have tried to show you the impact of Arsenal’s wide diamond, and how it was useful in advancing the attack from one phase to the next. The dynamism of this structure was very strong, given the possible passing options offered to the player on the ball, and this shape also worked to have the Arsenal players use their strengths in areas where they would work the best, such as Partey’s ability to progress the ball through runs from deep, for example.

In the second half, Arsenal changed things, including dropping Granit Xhaka deep as the third centre-back. Also, Smith Rowe went to the left and rarely moved to the other side, meaning that this diamond on the right was not created as many times as it was in the first half. However, we have already seen the benefits that this shape brought to Arsenal, and it will be interesting to see if Arteta uses this strategy in upcoming matches.