Not many players managed to mark the 2019/20 La Liga season as much as Martin Odegaard had. With the young Norwegian prodigy topping the charts for Real Sociedad across the board, it was just a matter of time before Real Madrid decided to recall him early and for Zinedine Zidane to introduce him into his star-studded squad.

However, fast forward half a season and for one reason or the other, Ødegaard has become an outcast at the Santiago Bernabeu. Now, if recent reports are to be believed, he is on the verge of going on another loan, this time to London and Arsenal in the Premier League.

For that reason, this tactical analysis will be a scout report on Ødegaard and will tell you how Mikel Arteta can use the young midfielder in his tactics. The data analysis part of the piece will also aim to uncover his strengths and see how he stacks up against the rest of Arsenal’s current roster.

Let’s dive straight into it.

The first part of this analysis will focus on Ødegaard’s player profile as we’ll try to decipher how he’s been used over the years and what exactly is his best position to date. During the early years of his career, the Norwegian talent has been largely used as a right-winger.

He was never really blessed with too much pace, which remains true to this day, but his technical ability and dribbling skills meant that he was deadly out wide. However, as the gained more experience and matured as a player, Ødegaard started drifting more towards the middle, occupying the right half-space and playing as a right midfielder or, at times, as the no.10, just behind the striker.

Below you can see his player dashboard that highlights some of his key attributes, namely creativity and progression. Note that the data for this analysis has been taken from Wyscout and includes all La Liga players from the 2019/20 season, when Ødegaard was at Real Sociedad, that have played at least 1000 minutes throughout the campaign. 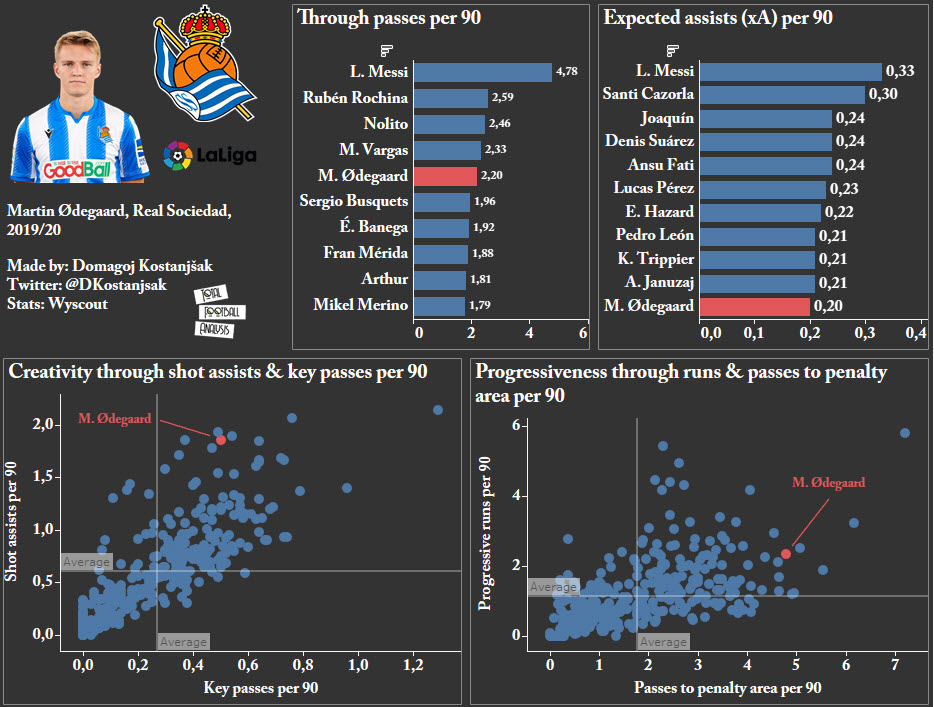 The reason for taking the previous season as opposed to 2020/21 is because of a much larger sample. As mentioned earlier in the analysis, Zidane has opted against using the youngster often, partly due to injuries as well, so the current season sadly can’t offer much insight. Still, 2019/20 was an incredible year for Ødegaard as a whole.

As you can see from the graph above, the youngster excels at decisive passing and is also both a great creator and progressor of the ball. When looking at shot assists and key passes per 90, he ranks among the very best players in La Liga, especially in the former category. Barcelona’s Lionel Messi is the clear outlier in all examples but seeing how the Argentine is barely human in footballing terms, we can look past him in these graphs.

Sending through balls is also something of a speciality for Ødegaard and he ranked fifth in La Liga in that metric last season with 2.2 per game, again only outshined by the very best Spain had to offer that year. While he won’t always record plenty of assists, he is still able to produce solid numbers, registering 0.2 expected assists (xA) per 90 as well, enough for an 11th place finish in the rankings.

Finally, looking at his heatmap and preferred positions above, courtesy of Wyscout again, we can see this favouritism towards the right side of the pitch but also the tendency to cut inside to a more central position. Ødegaard is a versatile midfielder but works best when given a free role in the final third.

The heatmap also tells us that he is quite the progressor as well since he will regularly drop deeper to assist the build-up and then carry the ball forward before deploying a deadly through ball. If needed, he can also be played as a right-winger but will always cut into the half-space, making him an ideal candidate for teams who like to attack with advanced full-backs or wing-backs.

Now that we have established his player profile, let’s see how does he stack up against Arsenal’s current roster and what he could offer to Arteta should he indeed land at the Emirates.

In one of our previous pieces on the site, we delved deeper into the state of the Premier League and tried to uncover the best and the worst performers so far. The data analysis revealed Arsenal were a team aching for creativity and a team unable to compete with their rivals.

Defensively, they still don’t concede that many chances despite largely failing to win duels of any kind across the pitch but offensively, they are among the teams who don’t create much and also register a low volume of shots per game. Since they are still very positional, as indicated by their possession values and low frequency of long ball usage, they tend to shoot from closer range, albeit with little success to show for.

So how does Ødegaard suddenly improve on those aspects? We’ve already seen from the initial data analysis the 22-year-old excels at shot assists and is an expert at getting the ball into the penalty area. Let’s see how he compares to Arsenal’s squad. 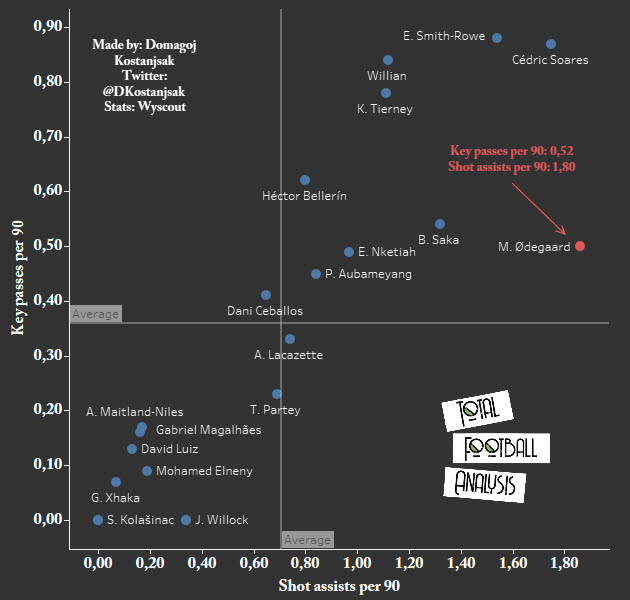 The graph above depicts Arsenal’s 2020/21 stats and Ødegaard’s 19/20 data to see whether he would improve their current team. With 1.8 shot assists per 90, the Norwegian midfielder tops the chart and outperforms every other player in the graph. Another very important aspect here is game time and with that in mind, only names with adequate minutes this season will be taken into account.

Out of the players with regular game time in 20/21, only Willian, Kieran Tierney, Héctor Bellerín and Bukayo Saka have registered more than Ødegaard’s 0.52 key passes per 90 minutes.

Let’s explore a couple of examples of that incisive passing and see whether it can be applied to Arsenal as well. Below is an image depicting a quick transitional situation with Ødegaard running with the ball towards the final third of the pitch. 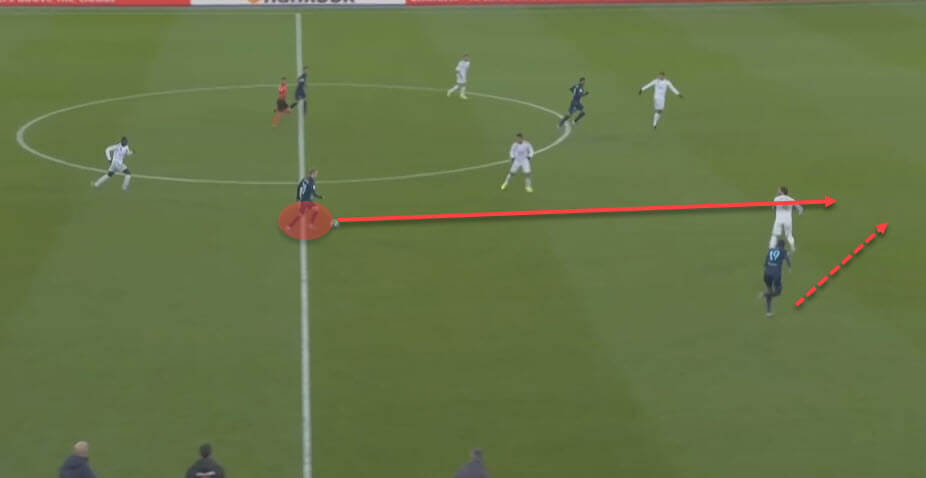 His first instinct is always to try and find runners behind the opposition’s defensive line. With the likes of Pierre-Emerick Aubameyang, Willian or the full-back option marauding into the danger area, Arteta could certainly use Ødegaard as a valve to release those runners and provide them with great service.

We’ve already seen that not many Arsenal players register that many shot assists or key passes per 90 minutes and the situation is rather similar when we take a look at through balls and deep completions per 90 (A non-cross pass that is targeted to the zone within 20 metres of the opponent’s goal) as well.

Below is another graph comparing the player with the Gunners’ 20/21 squad and it does seem like Arteta doesn’t have a player of his quality in the squad. At least not in this particular mould. 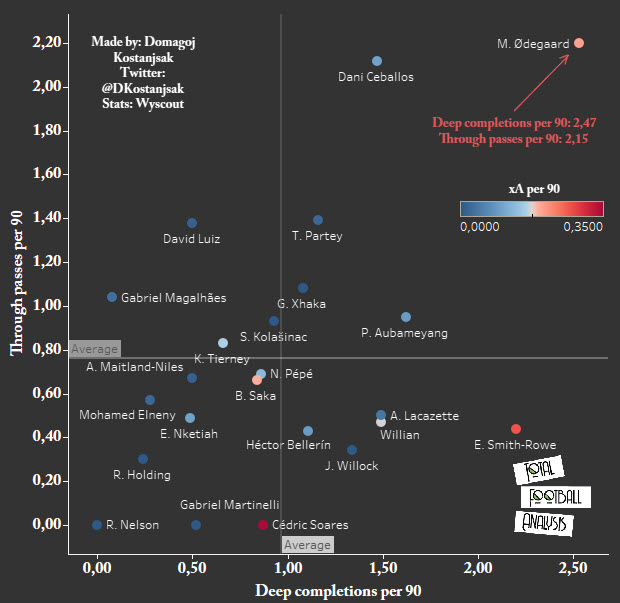 With 2.47 deep completions and 2.15 through balls per 90, Ødegaard outperforms every single player on this chart, including the ones with lower game time than him. Given their recent issues with both chance and shot creation, this could be the key to overturn their misfortune.

As mentioned earlier in this tactical analysis, the Norwegian likes to position himself more centrally when attacking the box and could be key in unlocking compact low blocks. Our next example shows his ability to break the lines and find solutions that may not be visible at first.

Below, La Real are on the offensive but the channels towards their key targets seem blocked. However, Ødegaard finds a way through.

It’s this kind of passing that truly sets him apart from most of the other playmakers. He is only 22 but already exhibiting a very high level of both confidence and skill. Still, as he matured over the years, his role somewhat changed as well.

Now, even though he is a top-class creator, he works hard for the team as well, which we’ll discuss in the next section of this tactical analysis.

Being naturally a much more aggressive and advanced midfielder, Ødegaard is not necessarily a world-class progressor. However, with him taking up a bigger role at Real Sociedad in 2019/20, we saw the youngster mature into a leader on the pitch. With his undeniable technical qualities, he was able to relieve La Real off the pressure from the opposition by assisting the build-up and advancing play.

We know Arteta would love to play in a 4-3-3 system with two number 8s in front of a sole pivot and the Norwegian prodigy may very well slot into that more advanced position with ease. This, after all, was the case at Real Sociedad where he predominantly played as the right midfielder in a midfielder trident.

The graph below deals with progressiveness and once again, we’ll compare Ødegaard to the rest of the Arsenal roster. 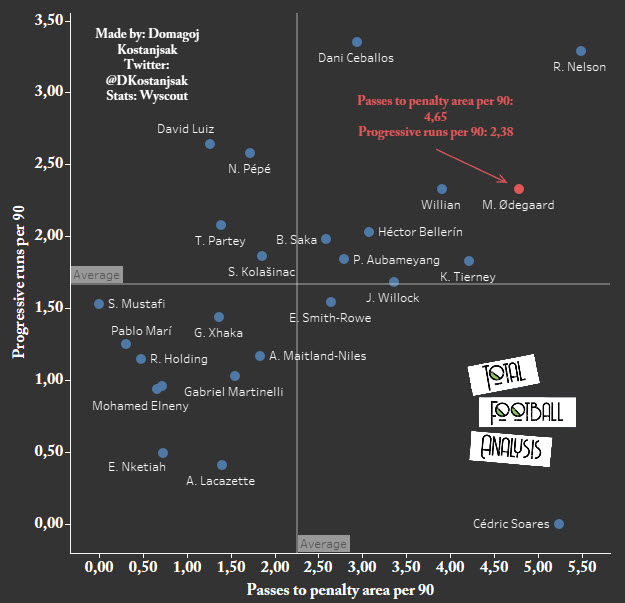 This is another indication of how powerful a weapon Ødegaard can be when entering the final third and within it. But another big characteristic of his is how he’ll always show for the ball and aim to move it up field.

Let’s explore a couple of examples from 2020/21 while wearing the Los Blancos colours. In the first image, Ødegaard is trying to assist the build-up by dropping deeper against Deportivo Alavés’ press. 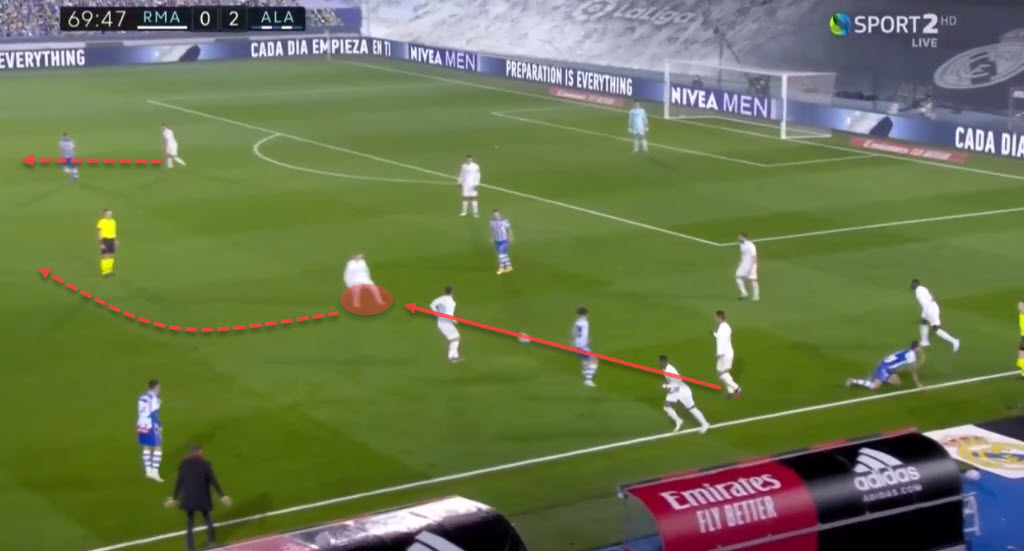 Even though progressive passes are not necessarily a clear outlier in his arsenal, he will often progress through runs and exploit and/or create space that way. In the image above, as soon as he receives the ball, the young midfielder will start his run towards the opposition’s half.

This then translates well into his other strengths as he often combines these runs with incisive passing, especially when it comes to through balls, which we’ve already mentioned in this tactical analysis.

For a heavy positional team like Arsenal, having such a profile potentially slot next to Thomas Partey could bode well for Arteta’s tactics. But this progressiveness doesn’t always mean he has to drop so deep to receive the ball.

Often, his movement and space occupation can open new passing channels for his teammates to exploit and this, once more, translates well into unlocking compact blocks. 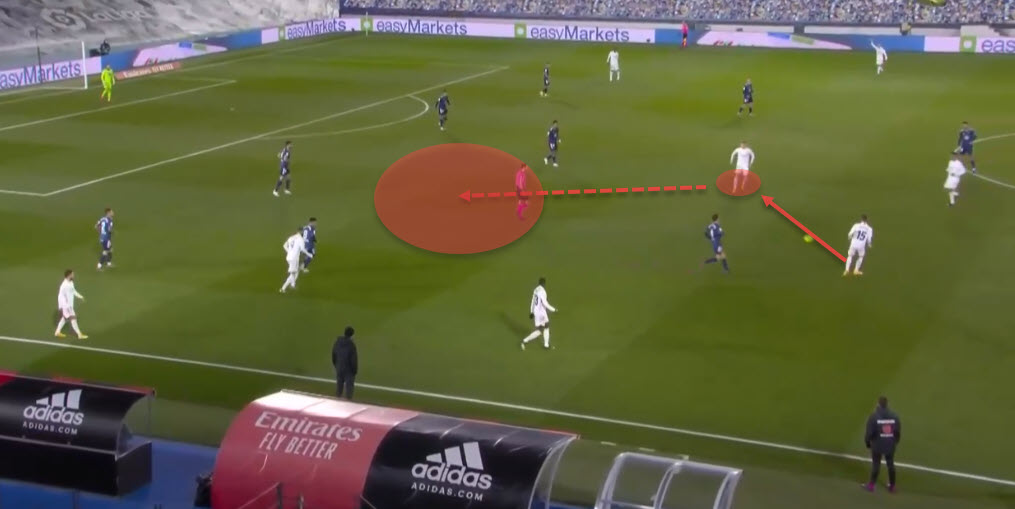 Above, you can see a different example of his ball progression, this time happening closer to the final third of the pitch. A very interesting characteristic of his player profile is that he actively exploits space whenever he’s in possession.

This image clearly depicts this tendency as Ødegaard charges into the space between the opposition’s line as soon as he receives the ball. From there, Real Madrid have an advantageous position and can construct their attack with runners in behind.

This tactical analysis was a short scout report on some of Martin Ødegaard’s main traits and how they could potentially benefit Arsenal. Quite clearly, the youngster compares well to the rest of the Gunners’ squad but there is always a question of adaptation and fitness issues.

Seeing how he’s blossomed into such a brilliant playmaker full of talent, Zidane’s decision to send him on loan does feel weird. Not only that but if he can show his true self and play at the level we know he can, this could prove to be a huge mistake for Los Blancos in the short-term.

Hopefully, this tactical analysis has shed some light on why Ødegaard should be able to improve Arsenal’s tactics and see the Gunners grow by the end of the 20/21 campaign.