Jonna Andersson is a 28-year-old player who has been at Chelsea Women for three years now and has been developing year after year, gaining confidence and experience, while also repaying the trust of her coach by making some very encouraging performances in the last couple of years.

Andersson is now getting close to her peak form, especially in the current season, where she has been able to play regularly and help her team to the top of the FAWSL standings, win the FA Women’s League Cup as well as reach the quarter-finals of the UEFA Women’s Champions League.

In this tactical analysis piece written in the form of a scout report, we will shed some light on this player’s defensive and attacking traits while also focusing on her passing, crossing, and goalscoring abilities based on data.

Jonna Andersson is becoming one of the most consistent left-backs in Europe, and one reason for this is her discipline and her defensive awareness.

For a left-back, being aware of the required defensive duties helps the team a lot in being balanced and not concede penetration from the wings. And in this regard, Andersson has been excellent especially in winning defensive duels. She wins 68.2% defensive duels per match and intercepts the ball 4.94 times per 90 minutes and this enabled the whole Chelsea defence to be more balanced and concede less.

And even when she faces quick opponents or excellent dribbles, she does not give up easily and follows the action, even when gets bypassed. Just like you can see in this example, she got bypassed by Manchester City’s winger but she followed her opponent and was able to deviate her crossing attempt at the end. And this highlights Andersson’s defensive awareness and determination to prevent dangerous actions from occurring on her flank. 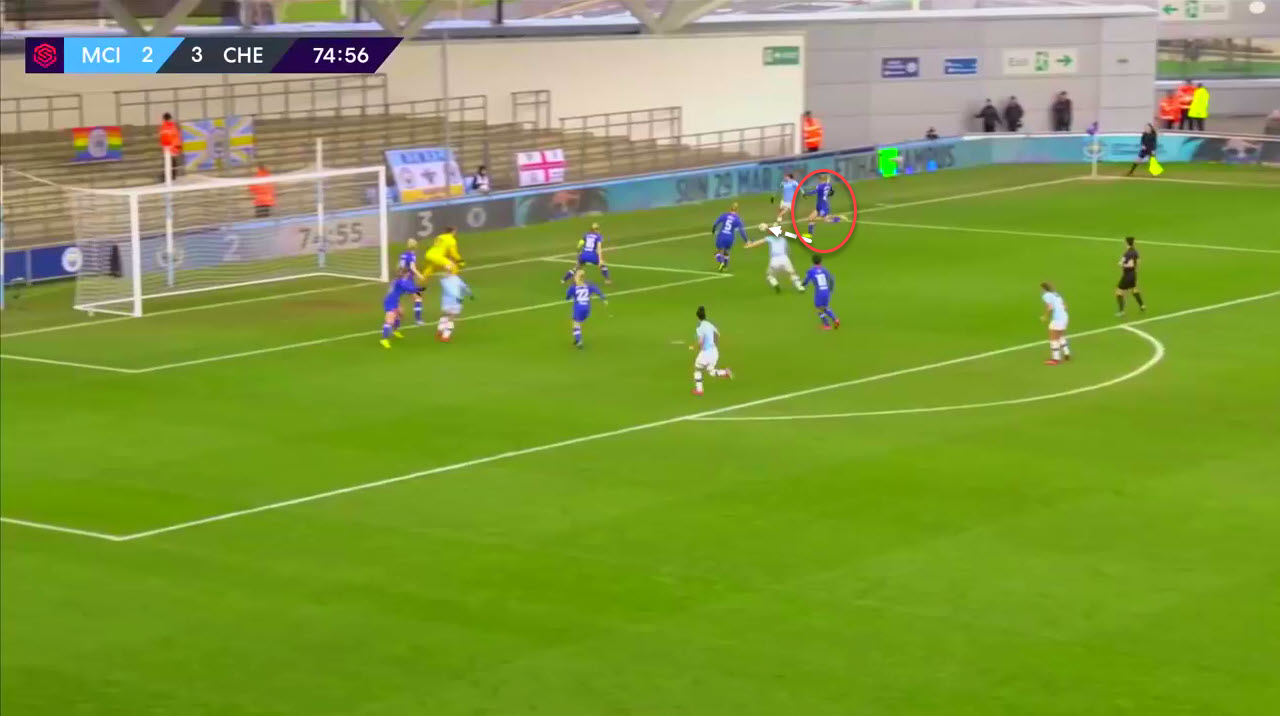 Moreover, Andersson has got pressing duties as well as part of Chelsea’s tactics to prevent the opponents from advancing and disrupting their build-up. And that’s why we often see her advance and try to stop the opponents’ midfielders/wingers from moving freely with the ball and attempting to intercept it.

Andersson intercepts the ball 8.36 per match in the opposite half and this is a big number that contributes in enabling the team to create many counter-attacks per match. And you can see in the picture below how she was pressing on Atletico Madrid’s winger and trying to steal the ball from her at their own half, and this was recurrent in almost all matches. 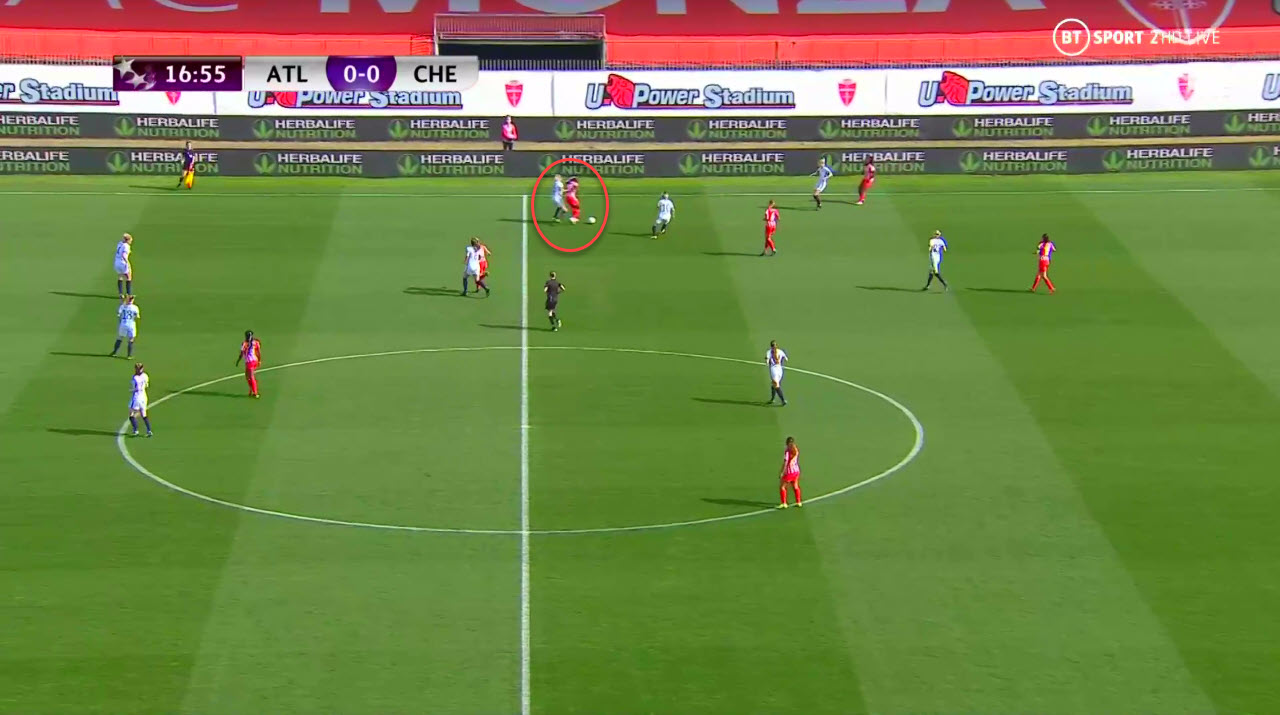 In terms of attacking performance, Andersson has been contributing regularly in the team’s goalscoring attempts mainly by crossing. She scored 14 goals during her time at Linköping from 2008 to 2017 while she scored 4 goals until now for Chelsea and made ten assists with her current team. And even though these numbers are not huge, Andersson is now becoming a fundamental weapon in Chelsea’s chance creation. With her accurate crosses, she often creates danger and this in turn leads to corners, goals or big chances.

She passes towards the final third with 62.4% of accuracy, which means that almost all her passes in the final third are dangerous. And the fact that she does not join the midfield so often, makes her able to cross more from the wing since she usually advances on that side of the field, like you can see in this heatmap. 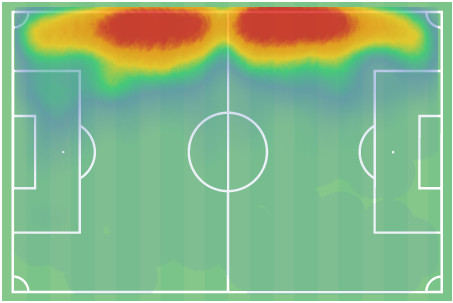 This shows that Andersson advances to the opponents’ own half as much as she stays in her team’s half, and this can only mean that Andersson is becoming a regular attacking left-back who knows when to advance and also when to stick to defence to not put her team’s defence in danger. The balance we saw in that heatmap is reflected on the pitch, and as we explained earlier about how she is attentive in defence, it should be said that Andersson is also usually concentrated when crossing.

She often sends pinpointed crosses towards the players who move towards the box like Kerr, Harder, Kirby, Leupolz and the others. Like you can see in this example, Andersson does not only cross the ball as a desperate attempt, she calculates her teammates’ movements and cross the ball with precision towards the spot the player is running towards.

And this created more chemistry between Chelsea’s attacking players and Andersson because they became aware of her crossing quality and they knew that they should just move and try to escape from marking whenever Andersson gets the ball in the final third. 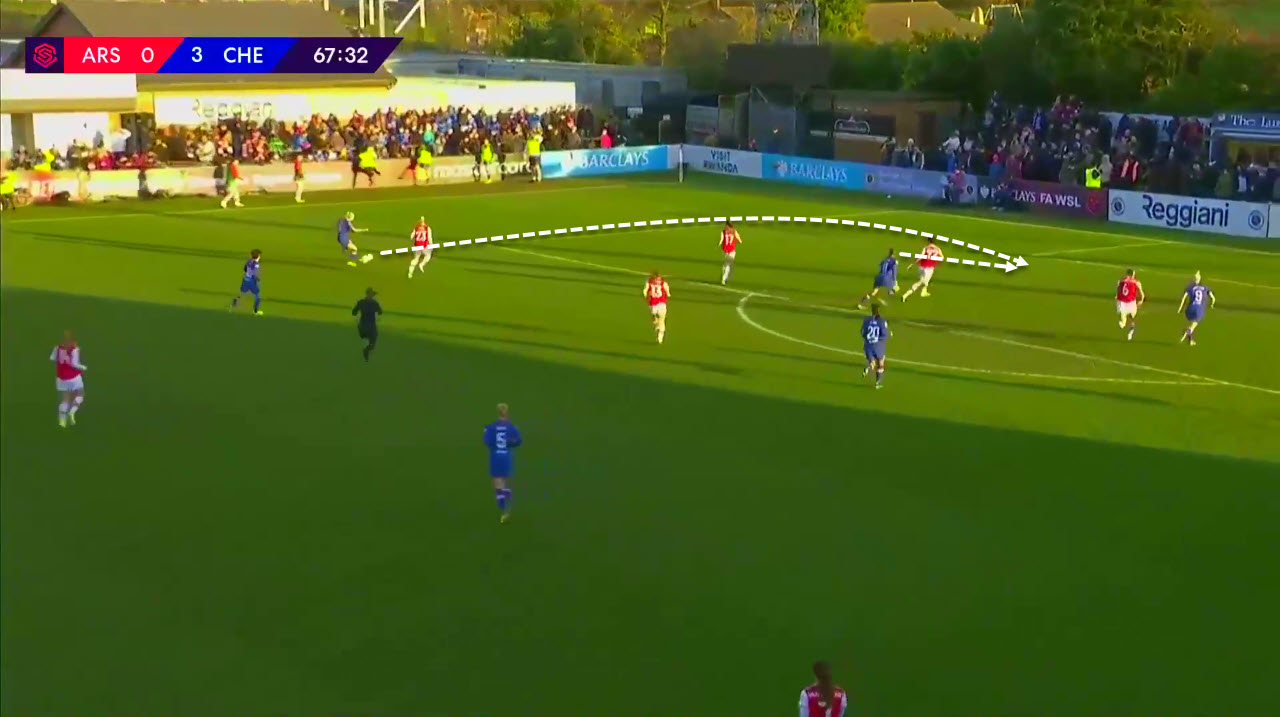 Moreover, when carrying out this analysis about Andersson’s tactical awareness, we should also highlight her movement without the ball. In fact, the Swedish international’s chemistry with Chelsea’s midfielders is growing more and more and this can be noted when watching the team play. Andersson often moves without the ball at the back of the opponents’ defenders while knowing that she will receive the ball since there is mutual confidence between the players. And this creates the difference in difficult matches.

For instance, you can see here how Ji So-yun saw Andersson’s acceleration and passed to her between three opposing players, and this not only sheds a light on Ji’s great pass, but also on Andersson’s awareness of the free space left behind the opponents’ defenders and the decision of making the run without the ball. 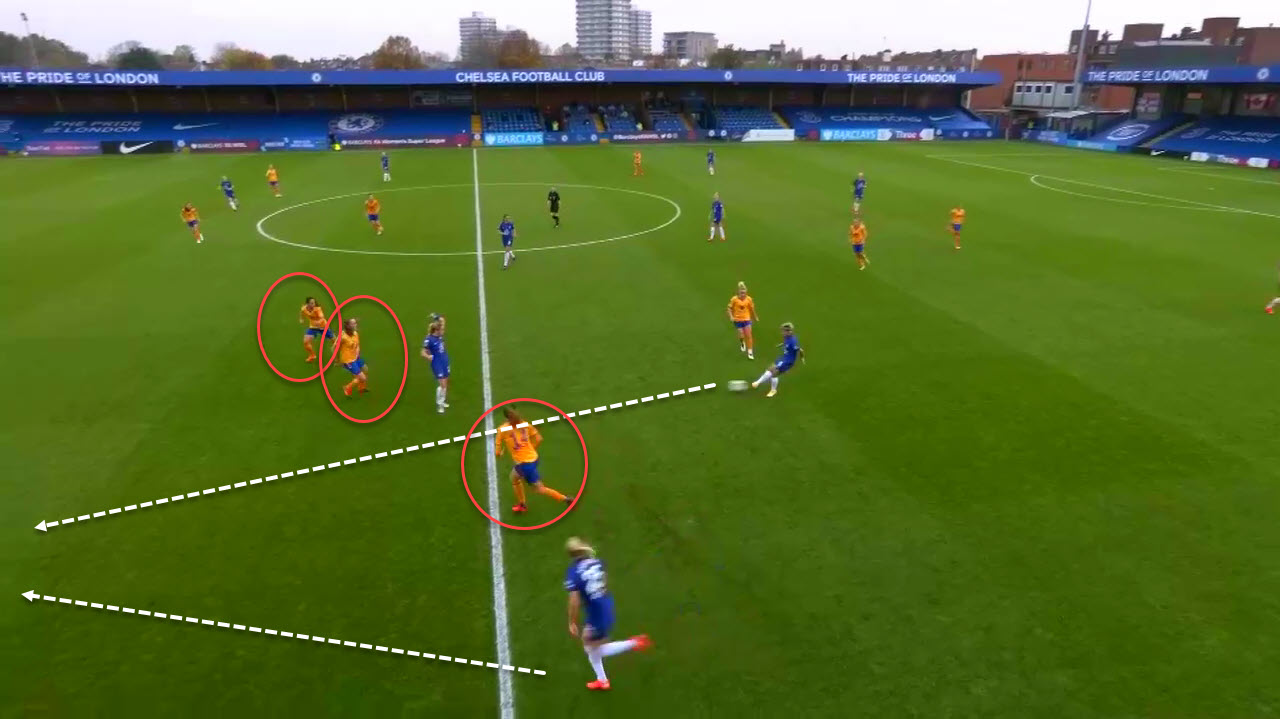 This pass, along with Andersson’s quick acceleration, allowed the latter to be in a great crossing position, and she did so with precision towards Chelsea’s striker. This combination was recurrent in Chelsea’s attacks and it just shows how Andersson acts like a winger whenever the team is attacking. 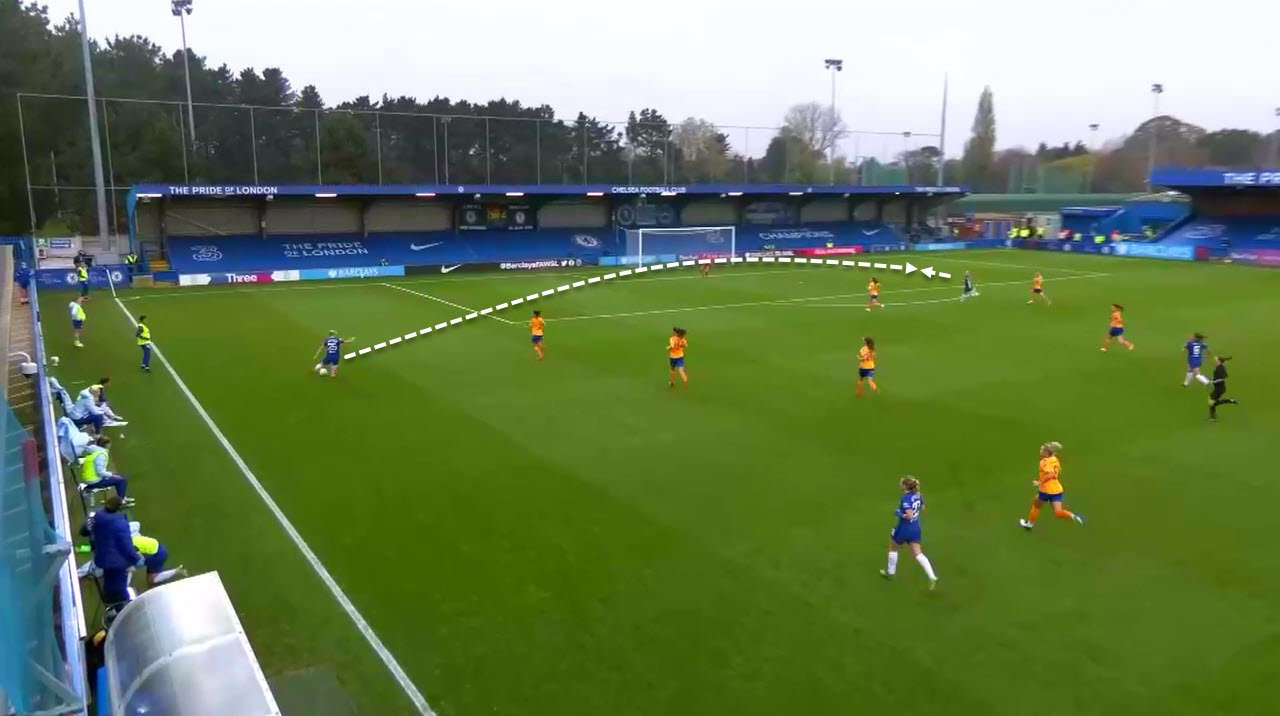 In addition to these traits, Andersson can actually score goals. Even though this is not her primary role, and despite the fact that she is not scoring many goals, this player is able to score whenever she gets the opportunity to do so. And what is more fascinating is that she scores with both feet. Emma Hayes does not really rely on Andersson to score goals, she mainly relies on her in making assists, crossing and providing passing options when she joins the attack while she relies on players like Kerr, England, Harder, Kirby, Cuthbert and others for shooting and scoring.

Yet, Andersson was able to score some beautiful goals during her journey with Chelsea so far and she can even work on this aspect even more since she has the abilities needed to score more goals especially by shooting from distance. 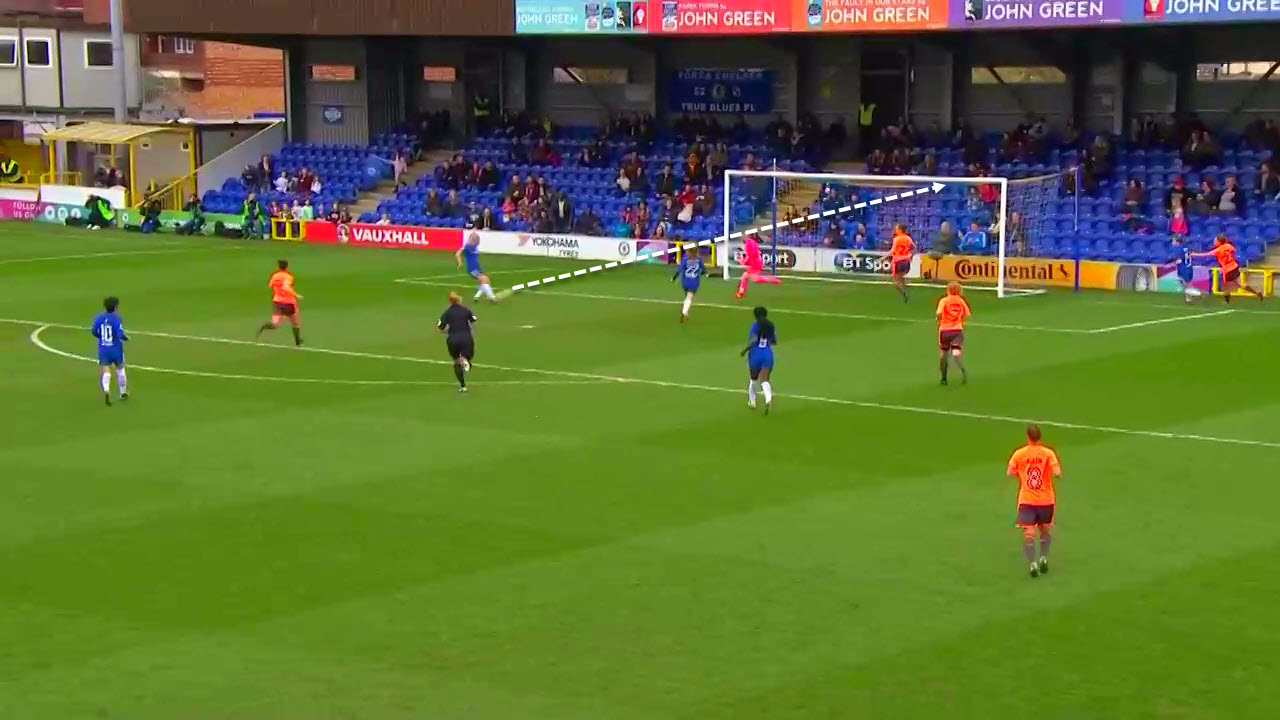 You can see in these examples how she was able to score goals with both her left foot and her weaker foot by shooting in difficult angles with great precision and power and even from complex positions. And this is why it would be beneficial for the team if Emma Hayes exploits her left-back’s goalscoring abilities more often by making her shoot more, and position herself inside or near the box more often when possible. 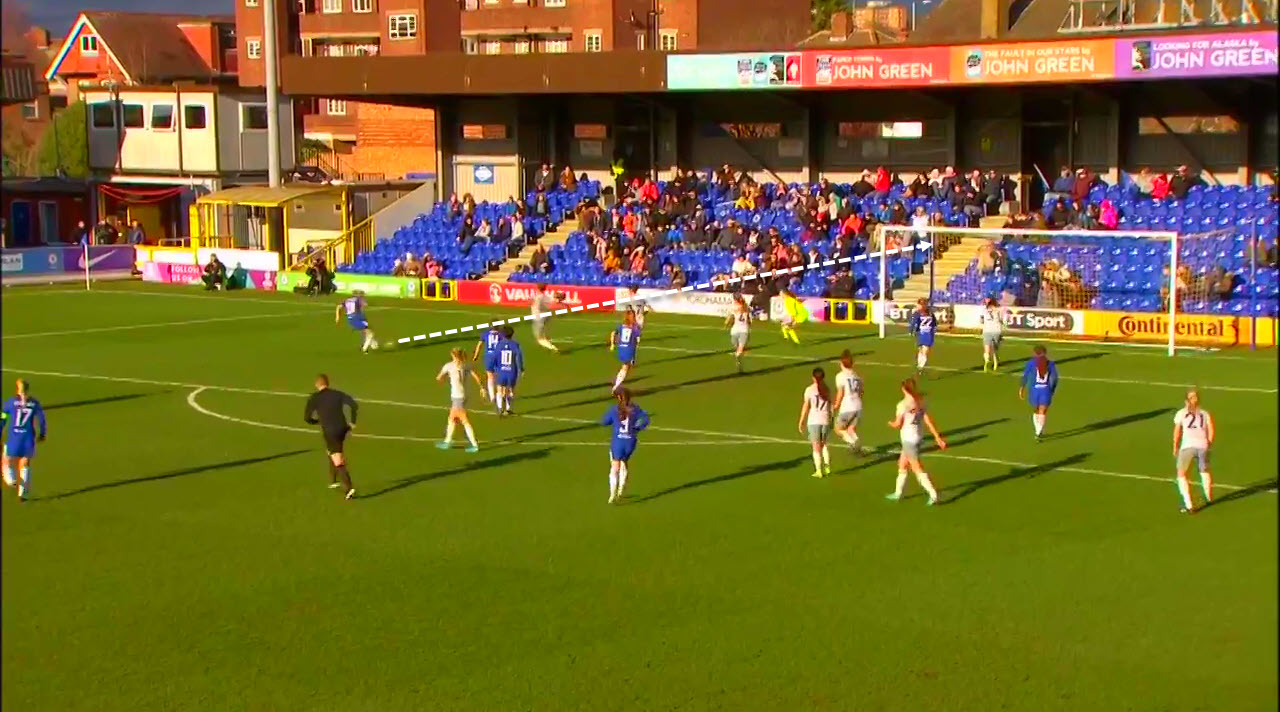 Jonna Andersson is becoming one of the most talented left-backs in FAWSL and in Europe, and if she continues in playing with the same determination and concentration, she can even become more performant both in the defensive and the attacking phase and contribute extensively in Chelsea’s future triumphs.

Moreover, the Swedish national team will definitely need such a player in the upcoming continental and international competitions since Andersson has now become one of the best Swedish left-backs as well. 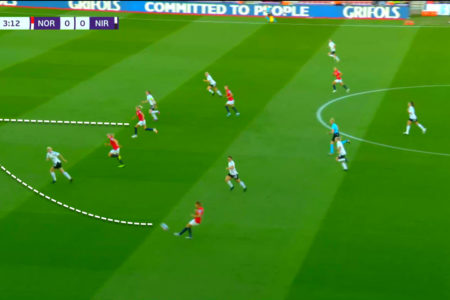 UEFA Women’s Euro 2022 kicked off at Old Trafford on Wednesday, July 6 with an opening match between England and […]