West Ham Women hosted Chelsea Women in the 16th round of fixtures in the FAWSL and the game ended with a 0-2 win for Chelsea who consolidated their lead at the top of the league with this away win. This allowed them to keep some distance from Manchester City, the side in second place, with a lead of two points in the table. On the other hand, West Ham United’s situation got worse since they are now at the bottom of the standings with only eight points.

In this tactical analysis article, we will shed some light on Chelsea’s performance, what they did in terms of attacking tactics in order to break down West Ham United’s defence, and how the hosts reacted to being behind in score. The analysis will begin by presenting the line-ups and formations, before tackling both teams’ performances.

The visitors started the game in a 4-3-1-2 formation, with Zećira Mušović as the goalkeeper, Niamh Charles, Maren Mjelde, Millie Bright and Jonna Andersson in defence, Sophie Ingle, Guro Reiten and Ji So-Yun in midfield while Pernille Harder played behind the two strikers, Sam Kerr and Bethany England. Emma Hayes preferred to rest Fran Kirby and Melanie Leupolz for the upcoming UEFA Women’s Champions League fixture against Atletico Madrid, while the captain Magdalena Eriksson was absent due to injury. 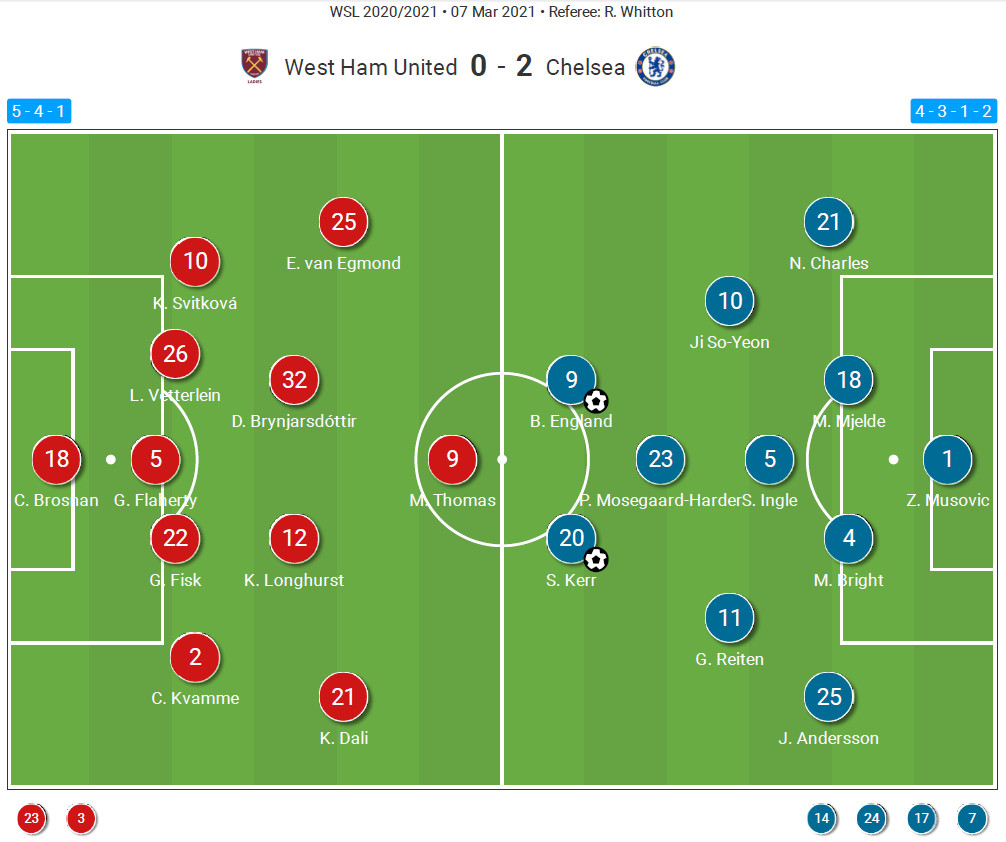 As we saw in the line-ups above, West Ham United’s coach, Olli Harder, preferred to start with a very defensive formation relying on two defensive lines composed of five players in defence and four midfielders, in an attempt to stop Chelsea’s dangerous players and continuous attacks.

In fact, West Ham’s players tried to focus on preventing Chelsea’s attackers and midfielders from getting space in the final third, and this was key to either intercepting the ball or forcing Chelsea’s players to make difficult passes that did not have much chance of reaching the intended receivers.

You can see below, for example, how Andersson tried to pass to England who was asking for the ball, but at the same time Andersson was surrounded by four West Ham United defenders. This made passing in the final third more complicated for Chelsea who therefore needed to apply another approach to break down this defence. 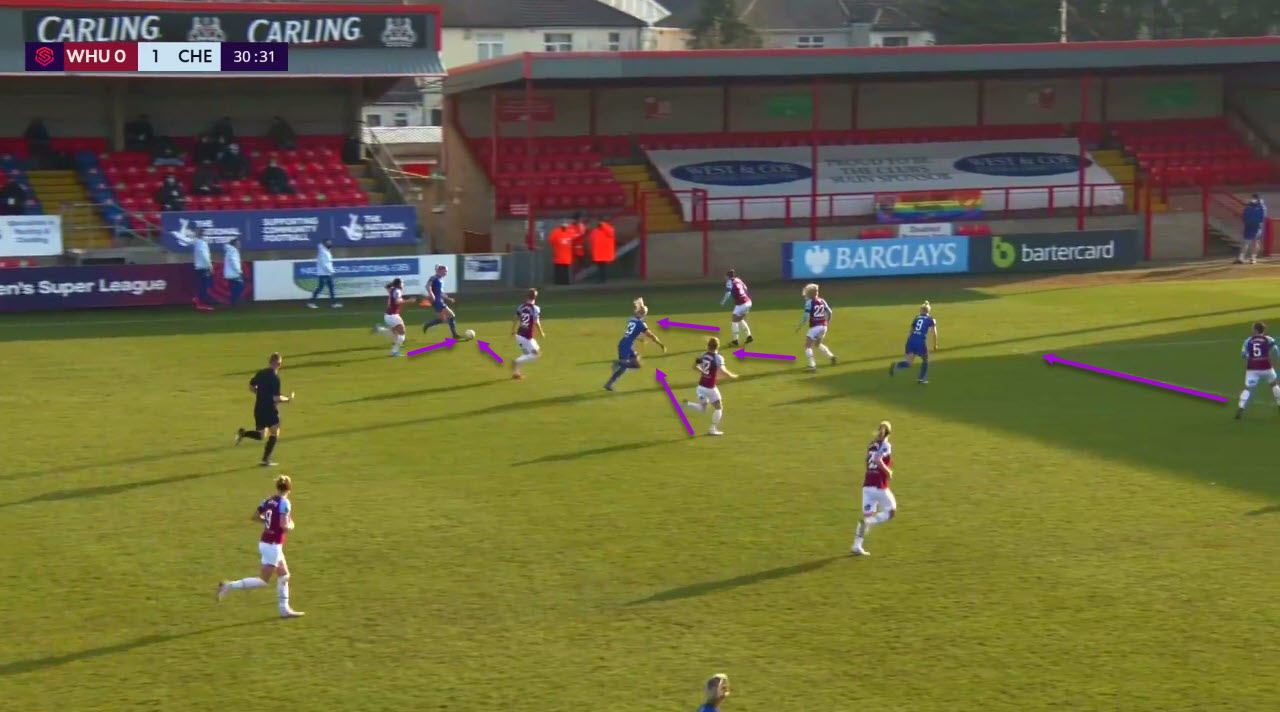 Moreover, even if the ball reached England in this case, Flaherty was already waiting for Andersson’s decision and would have gone in the direction of England’s run to intercept the ball.

The positioning of the West Ham players also allowed them to prevent dangerous players like Harder, England and Kerr from having too much influence on the game, and with their compact defensive shape, it was difficult for Chelsea to bypass them without attempting ambitious passes and losing the ball. Chelsea also lost 22 out of 58 offensive duels with a success rate of just 37.93% mainly due to West Ham’s approach and to some individual mistakes as well. 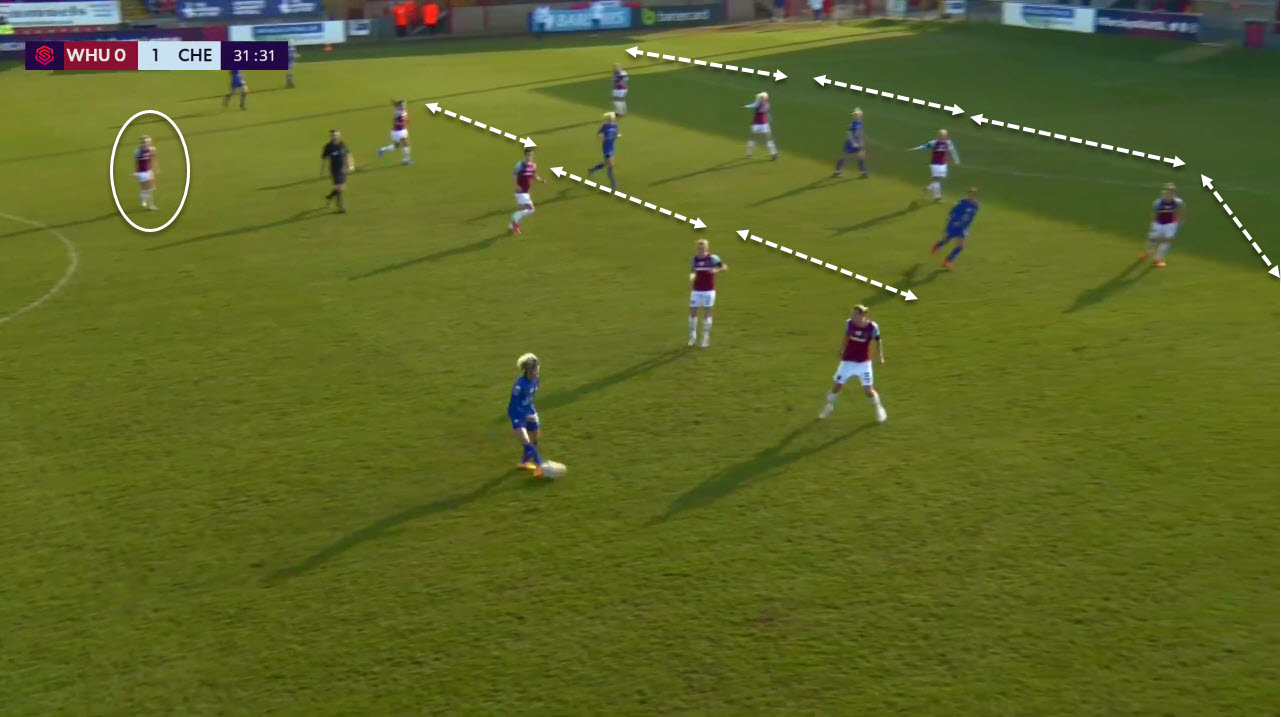 However, in the attacking phase, West Ham did not create many opportunities since Chelsea had more possession; 61.47% for Chelsea and 38.53% for West Ham United. Also, the team did not attack with numbers since they were afraid of Chelsea’s quick and dangerous counter-attacks. This is why we saw only desperate attacks from West Ham United which lacked concentration and precision. West Ham United relied solely on Martha Thomas to win aerial duels and hold up the ball, with their sole attacking tactic being to try and find her with long balls once they won the ball back in their defensive third of the pitch.

Thus, Thomas had to try and hold off multiple Chelsea players while waiting for her teammates to get up the pitch in support. However, the Chelsea players were attentive enough in defence and did not allow this to happen, even though West Ham United made many attempts to surprise them, but Thomas’ passes often lacked accuracy, while her finishing let her down when she was able to create a couple of chances for herself. 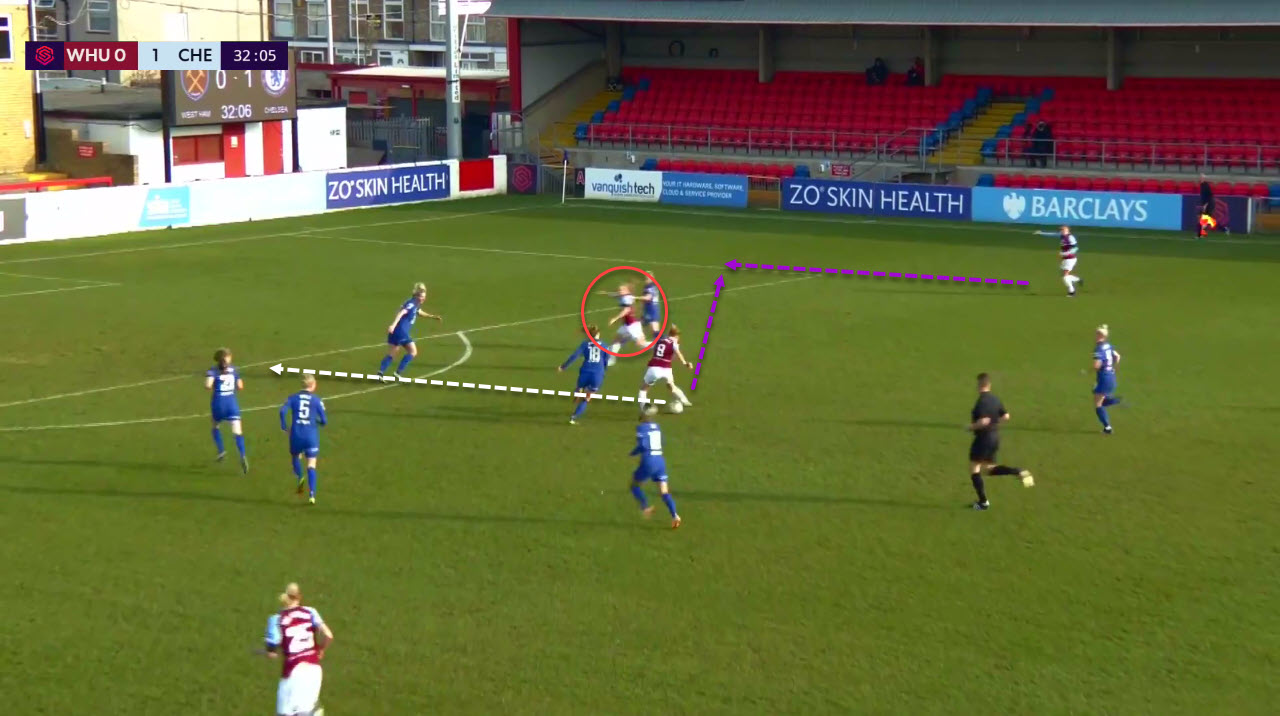 As you can see in the above image, Thomas was in an excellent position after she dribbled past her marker and was able to give her teammate a through ball in behind the Chelsea defenders, or pass to her other teammate who was unmarked on the wing. However, she missed this chance by making a wrong pass to Longhurst that was intercepted by Bright.

Chelsea took 15 shots in this match with seven of them were on target, yet, most of these shots were headers. And more importantly, both of Chelsea’s goals came from crosses and with headers. This was due to West Ham United’s poor marking, as well as Chelsea’s accurate crossing and intelligent positioning inside the box. Chelsea made nine accurate crosses in attack that brought danger to West Ham United’s defence, and this was the way in which they managed to break down the Hammers’ defence, since they were unable to penetrate centrally.

As we can see below, England was the player who crossed the ball to Kerr here, and that’s how they were able to confuse the West Ham defenders who expected both players to just wait for the other players to create chances for them. 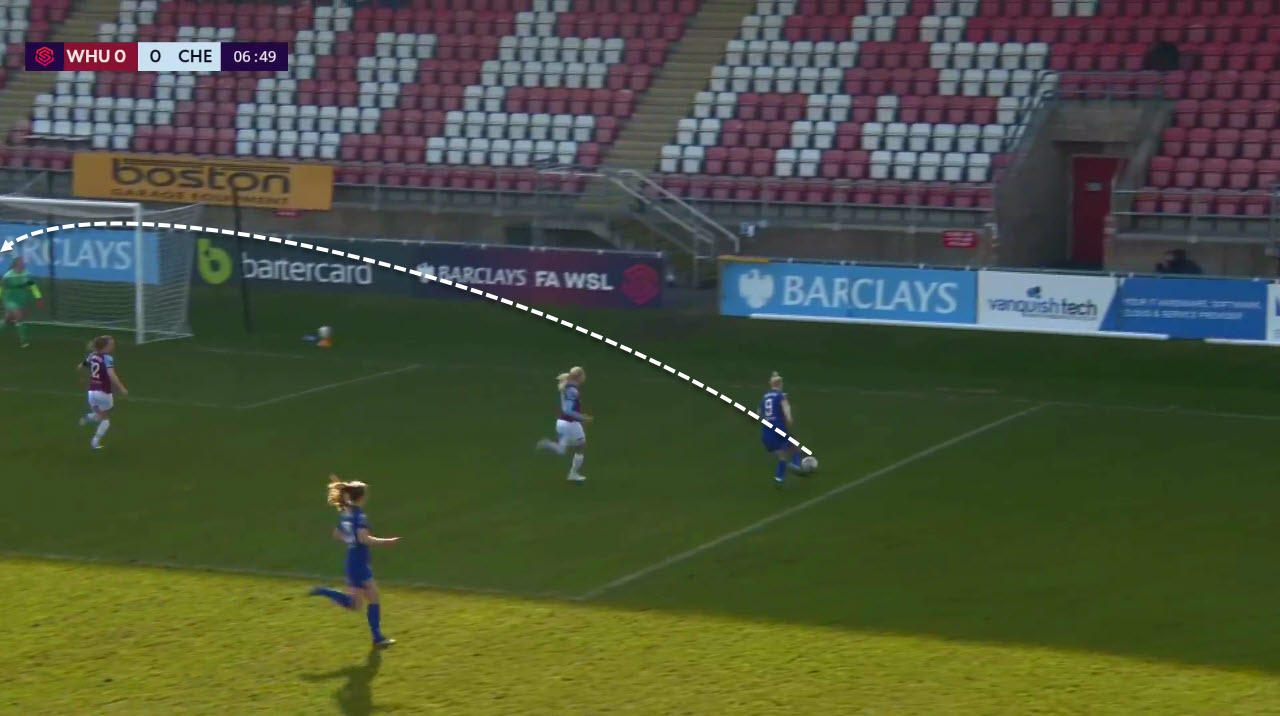 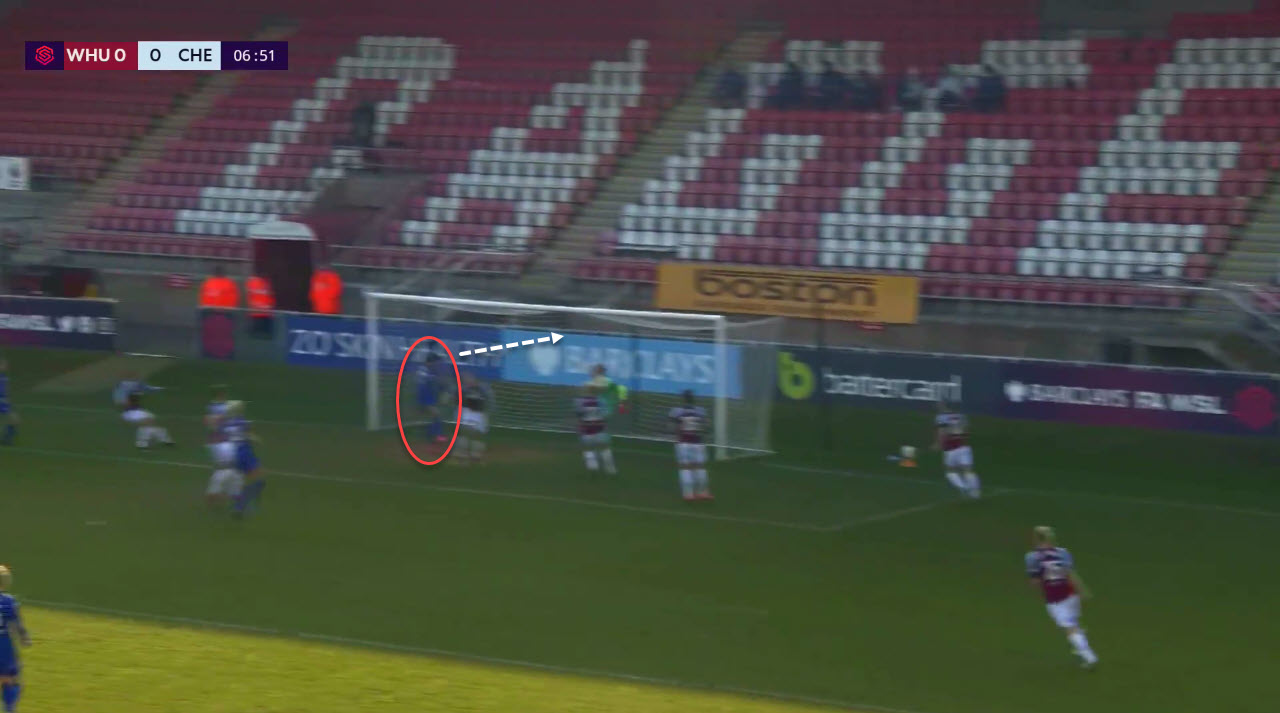 In fact, both Chelsea strikers were able to confuse the West Ham United defenders twice since the second goal was borne out in the same manner but from a different player. This time, it was Kerr who moved to the right wing and crossed to England who was waiting unmarked inside the box. This highlights West Ham United’s poor defending in these situations. 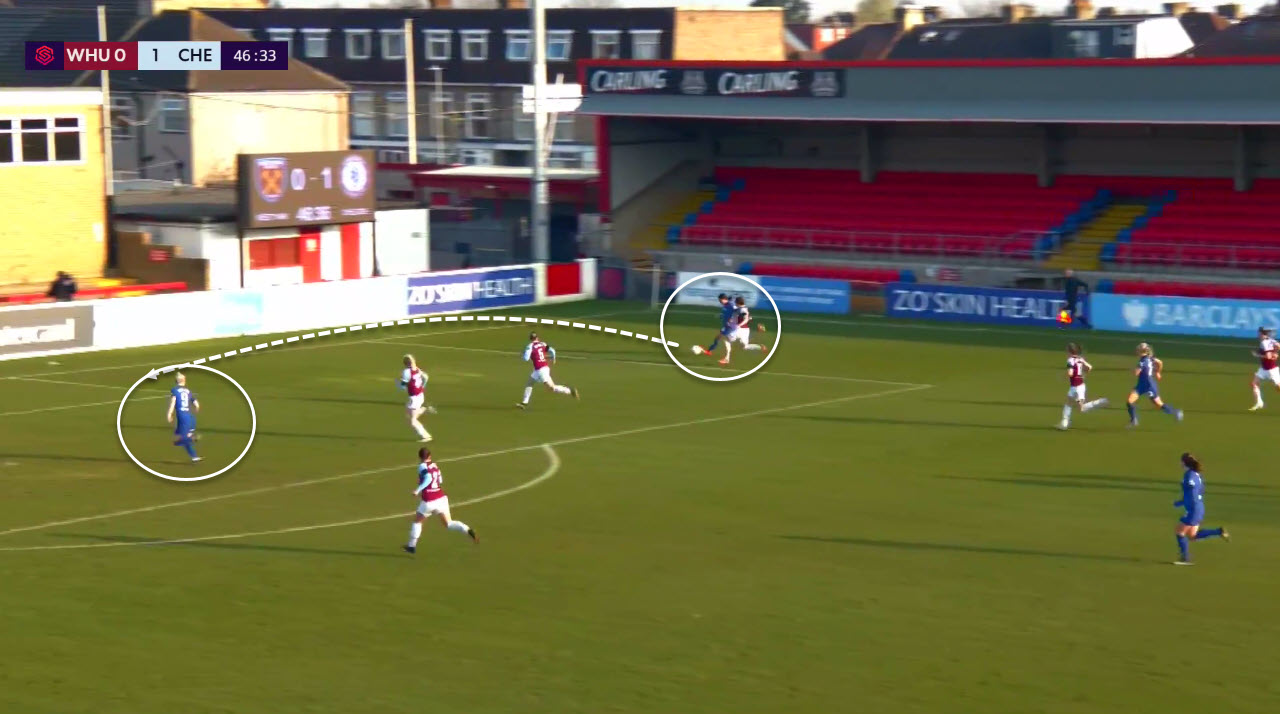 Chelsea were able to remain inside the final third for the larger part of this match and this allowed them to score twice and create many other chances which were not very dangerous but contributed in exhausting the West Ham United defenders.

With 48 accurate passes in the final third, Chelsea were effective in penetrating down the wide areas, with the continuous movements of their players, mainly Harder, Ji, Reiten, England and Kerr causing West Ham a lot of problems.

At the end of the day, Chelsea got the victory they wanted over a defensive West Ham United side thanks to their efficiency and accuracy while crossing. This was a much-needed win for the Blues to keep their good run of form going prior to their UEFA Women’s Champions League match, as well as to stay ahead of the chasing pack in the league.

On the other hand, West Ham United will need to be more attentive when defending deliveries from wide areas, and work further on defensive marking if they want to concede fewer goals in the upcoming matches. At the same time, they need to focus more on the attacking aspect as well and try to exploit the chances they create if they are to have any hope of escaping the dire situation they find themselves in at present. 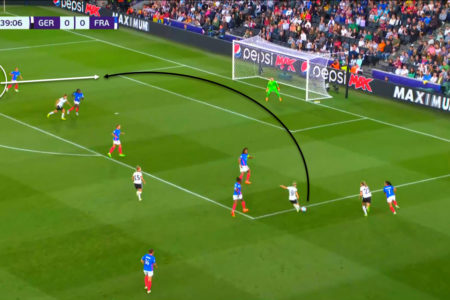