The 2020/21 Serie A campaign has been the home of numerous high-scoring and entertaining games, with this tie between Sassuolo and Napoli fitting into that category with a thrilling 3-3 draw. Following this fixture, both teams would want to improve their form – Sassuolo now have just one win in their previous five games: two in five for the visitors Napoli. While Sassuolo aren’t necessarily expected to qualify for the Europa League or Champions League for next season, Napoli supporters will be expecting a turnaround in form to make a push for UCL qualification, with the club currently sitting in 6th. They would have to catch the likes of Juventus and AC Milan to make this a possibility. In this tactical analysis, we will take a look at some of the key areas that allowed both teams to cause damage to their opponent – particularly the tactics used in the build-up to a goal. 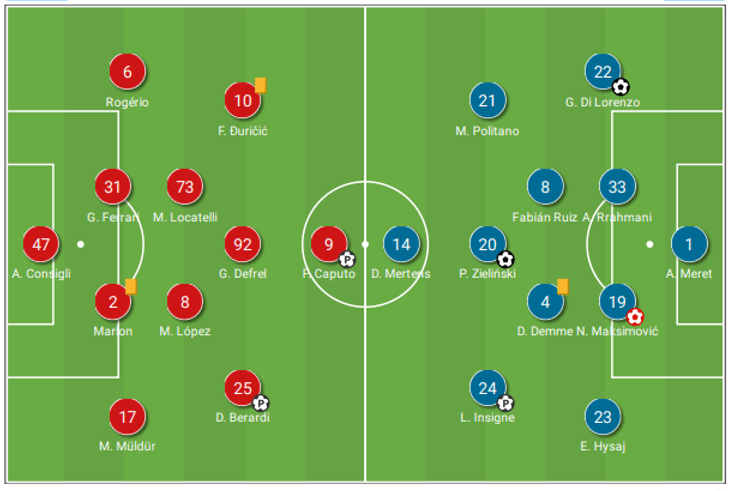 Hosts Sassuolo deployed a 4-2-3-1 shape. The veteran Francesco Caputo, who has an impressive 11 goals and 6 assists in 19 appearances this season, leads the line for the home side, with wide support from Domenico Berardi and Filip Đuričić. Grégoire Defrel operated as the advanced central midfielder, with Maxime López and Manuel Locatelli sitting in the deeper midfield roles. The back four consisted of Marlon and Gian Marco Ferrari in the middle – Mert Müldür and Rogério playing as full-backs. Andrea Consigli was the man between the sticks.

Visitors Napoli also set up with a 4-2-3-1 formation, with Belgium international Dries Mertens playing as the lone striker. Attacking support came in the form of Lorenzo Insigne and Matteo Politano from wide areas – Piotr Zielińksi playing as central support. The two deeper roles in midfield were taken by Fabián Ruiz and Diego Demme. The backline consisted of Elseid Hysaj, Nikola Maksimović, Amir Rrahmani, and Giovanni Di Lorenzo – from left to right, with Alex Meret in goal.

Sassuolo’s mixed fortunes out of possession

Sassuolo have been gaining a lot of attention and credit for their play in possession this season – and rightly so. Roberto De Zerbi has created an impressive identity and culture at the club that sees them play with admirable style. However, their defensive work in this game, despite conceding three goals, was positive in some areas – especially in the early stages of the game.

Napoli seemed adamant on playing out from the back to have possession in the attacking third, with the aim of pinning the home side back into their own defensive third. Sassuolo had other ideas and applied great amounts of pressure to Napoli high up the pitch. Sassuolo’s depth was not very low anyway, but pressing triggers like a poor touch, or taking a lot of time on the ball acted as a catalyst to unleash the press onto Napoli.  In the image above, we see Defrel chasing down the Napoli man on the ball, who is already scrambling to regain control. Ruiz and Politano provide extra pressure by marking the two nearest passing options, forcing Napoli to go a little more direct. Sassuolo’s marking throughout the pitch was too much for Napoli to play through, and we a turnover in possession – an occurrence that popped up a few times for Sassuolo throughout the game.

As we see above, Napoli were still applying high pressure in the latter stages of the game – in this instance they were in search of a last-gasp equaliser, while Napoli were still insistent on playing a short passing game. After a risky quick throw-in, Gian Marco Ferrari uses his natural defensive ability to win the ball back on the half-way line, before knocking it past an oncoming Napoli opponent to break into space, launching a transitional attack for the home side. After carrying it into the Napoli half, he releases a pass to Lukáš Haraslín, who made a run with pace wide on the right flank. The Slovakian winger darted into the Napoli box with the ball before winning his side a penalty, which was dispatched to make the game 3-3. It was Ferrari’s awareness and tenacity that allowed him to regain possession, before displaying composure and good decision making to progress the Sassuolo attack.

Despite their good work in the pressing department, Sassuolo let themselves down on a couple of occasions when trying to defend a Napoli attack, often leaving spaces for them to exploit. While this was good individual play from Insigne to beat his man and get the cross in, we are looking at this segment of play through a defensive scope. Firstly, López, the man in the 1v1 situation with Insigne, makes it way too easy for the Italian winger to get past him – and there was no covering defender behind him either. Another disappointing piece of defending was their shape. Not only is the marking of the only two Napoli players in the box poor, but the space between the yellow-marked players towards the back post is also far too large, and it allows Di Lorenzo plenty of space to simply wait in. Sassuolo needed a commanding leader in this situation to get his defence into shape to deal with the cross.

As mentioned, Napoli approached the game with a focus on build-up play via possession – using short passes to play through the thirds. However, Sassuolo’s pressing and off-the-ball work in midfield forced Napoli to work the ball into Sassuolo’s half in a more direct nature, which paid dividends. From there, they were able to execute some brilliant pieces of combination play to create goal-scoring opportunities.

From a Sassuolo perspective, they will again be disappointed with their defensive display here as they left a huge space for Napoli to work in with very little defensive presence. The trio of Politano, Demme, and Di Lorenzo work wonderfully well together in this passage of play, executing a triangle passing combination which ends with Demme receiving the ball on the turn towards goal. He then picks out Zielińksi at the edge of the box, who is unmarked by this point, who turns and unleashes a wicked shot past the keeper to make it 1-1. Exploiting the space left by Sassuolo shows great awareness and reaction by Napoli to move an attack so smoothly. The little bits of movement from the wide trio made things even more difficult for the Sassuolo defenders that were nearby, especially Demme – he managed to make himself a dangerous target in an open space inside the penalty area, which was quickly recognised by Di Lorenzo.

As Napoli found their best attacking approach throughout the game, they began utilising clever movements off-of-the-ball to take advantage of a poor defensive set up from Sassuolo. In the image above, we see Insigne dropping deeper to collect the ball in an attempt to progress the attack via a smart dribble, or as we see above, a brilliant long pass to the opposite flank for the arriving full-back, Di Lorenzo, who caused Sassuolo endless amounts of issues. The precision of the pass was perfect from Insigne and was met with a good touch from Di Lorenzo, who carried the ball to the byline before cutting back and winning his team a penalty. While this may seem like a simple long ball pass followed by a clumsy tackle, the option to drop Insigne a little deeper to pick up the ball was taken a few times, as he has the technical ability to execute such skills as the ones seen above. He wasn’t getting much joy operating as a winger sitting high and wide all the time, so Napoli altered things to place him in these positions more often.

In this final segment, we provide an analysis of some of the tactics used by the home side to create some good chances that resulted in goals. Sassuolo showed great quality on the ball, able to keep possession smartly but also able to strike at the right moment

We saw a number of occasions where Napoli were happy to commit a number of players to a high-pressure system to try and win the ball back from Sassuolo high up the pitch. However, they found little success with this tactic, and Sassuolo often played through the press with relative ease. This is exactly what we see in the image above. Locatelli is the Sassuolo man on the ball, having just escaped a potentially dangerous situation with three Napoli players looking to dispossess him. After breaking free, he takes little time to look to launch a counter-attack, while Napoli are too slow to react and regroup. Locatelli fires a pass into Defrel, who receives the ball on the turn and carries the ball into the Napoli half before releasing the ball to Berardi out wide. The Italian winger then dribbles towards the edge of the box, drawing a foul – a free-kick from a very wide angle. The free-kick is whipped goalwards and flicked in off of the head of Napoli defender Maksimovic. The ability of Locatelli to beat the Napoli press and quickly exploit their lack of ability to regroup is an example of the way this Sassuolo side thinks.

Above is an example of using a combination play of their own to exploit an exposed Napoli back-line. Rogério (Sassuolo no. 6) exchanges a 1-2 move with Đuričić where there is little cover by Napoli. After receiving the ball in the box. Rogério lays a pass into Caputo who wins a penalty. The focus is on the 1-2 between the two Sassuolo players as they showed a real awareness and determination to progress some possession that looked only half-decent to begin with, into a dangerous chance that resulted in a penalty.

One thing that is certain – the entertainment value of this game was fantastic. Two ambitious sides who weren’t afraid to attack weren’t afraid to adapt to slightly different tactics, yet stuck to their principles. Sassuolo’s pressing, especially in the midfield and forward areas, was phenomenal – Napoli found it extremely difficult to cope with and lost the ball a number of times because of it. Napoli’s ability to alter their tactical approach was impressive while exploiting the small errors in Sassuolo’s defensive setup allowed them to unlock their backline and create plenty of chances. The decision to change Insigne’s role made it difficult for Sassuolo to act quickly and stop the attacks that stemmed from him, while Di Lorenzo put in a top-class shift at right-back, contributing in both defence and attack greatly.