When the team sheets were released, there was a genuine sense of surprise that Real Madrid could enter this game playing a 3-5-2.

Social media was abuzz. There was definitely a need to shore up defensively to protect against this high-flying Atalanta attack and the absence of Casemiro due to suspension only made matters worse.

This analyst was certainly surprised, a bit concerned as well, but it was another masterstroke of adaptability by Zinedine Zidane. In the end, Real Madrid produced their most convincing UEFA Champions League display of the campaign, seeing out a fairly comfortable 3-1 victory.

In this tactical analysis, we’ll examine some of the underlying principles of success, as well as Real Madrid’s pensive start that nearly saw Atalanta bring the tie level. 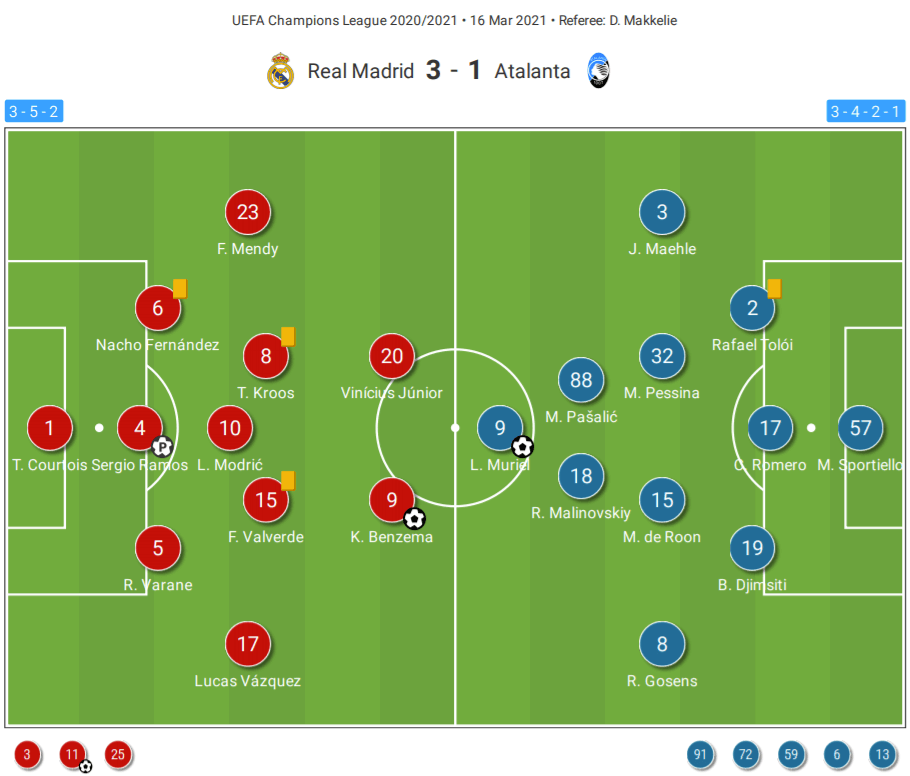 Deviating from his preferred system, Zidane’s 3-5-2 saw Thibaut Courtois in goal with Raphaël Varane, Sergio Ramos and Nacho Fernández filling out the back three. Luka Modrić and Toni Kroos mostly worked together in a double pivot, freeing Federico Valverde to start higher up the pitch.Ferland Mendy and Lucas Vázquez were penciled in as the wingers while Vinícius Júnior and Karim Benzema started up top.

Gian Piero Gasperini set out his side in a 3-4-2-1 with Marco Sportiello in goal. From right to left, the backline consisted of Rafael Tolói, Cristian Romero and Berat Djimsiti. Joakim Mæhle and Robin Gosens were the wingers while Matteo Pessina and Marten de Roon operated as the double pivot. Mario Pašalić and Ruslan Malinovskyi were the attacking central midfielders in the formation with Luis Muriel playing as the lone striker.

One of the key changes Zidane made in this second leg was the way he structured the team. Deviating from his customary 4-4-3, he instead used a back three to defend against the possibility of a 3-4-1-2 from Atalanta. Between the three centre-backs and a virtual double-pivot featuring Modrić and Kroos, he looked to secure the central part of the pitch while funnelling Atalanta into the wings.

By overloading the middle, Zidane was not only funnelling Gasperini’s men into the wings, but he was also provoking them into a more expansive attacking shape. Even when Atalanta looked to overload near the ball, they looked to maintain their width on the far side through their winger, which then created another issue…Atalanta’s ability to compete in the centre of the pitch.

In the early minutes, Real Madrid had some nervy moments, nearly conceding on a couple of occasions. When they struggled, it was less due to their defensive shape than their issues playing out of Atalanta’s high press.

Atalanta’s first chance came roughly two minutes into the match through Gosens. A high recovery led to a left-wing overload from Atalanta. Through the use of a smart pass from Pašalić into Muriel, Gosen’s showed excellent awareness to burst into the space his #9 vacated. 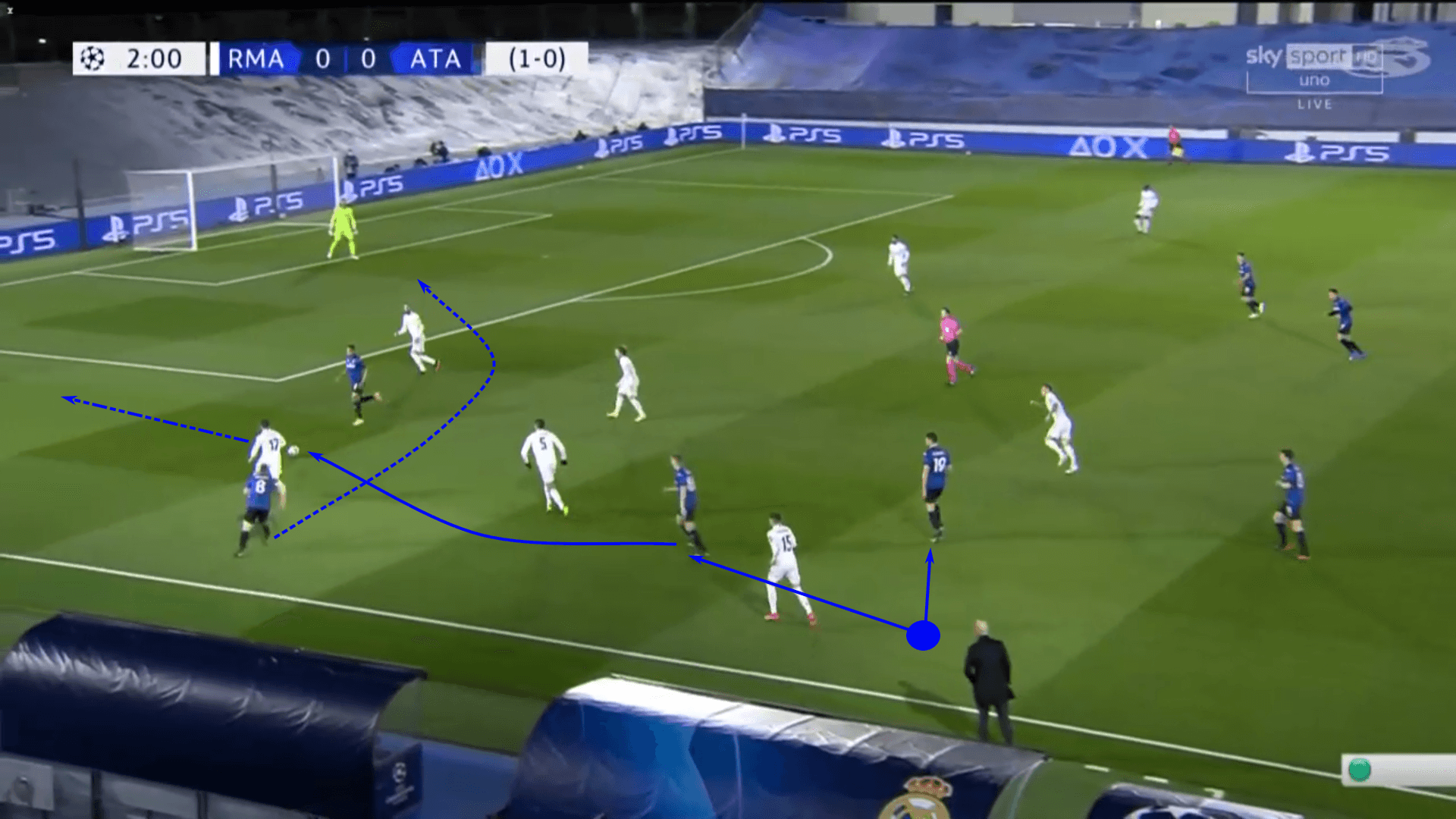 This is one of the few instances Real Madrid looked shaky at the back. Gosens’ run went untrack with Modrić the nearest player and Varane caught a no man’s land. Gosens picked out a nice patch of space in the box and latched onto the cross at the near post. The cross was a little bit ahead of him, so he did have to lunge at the ball. In the end, it was a fairly routine save from Courtois. 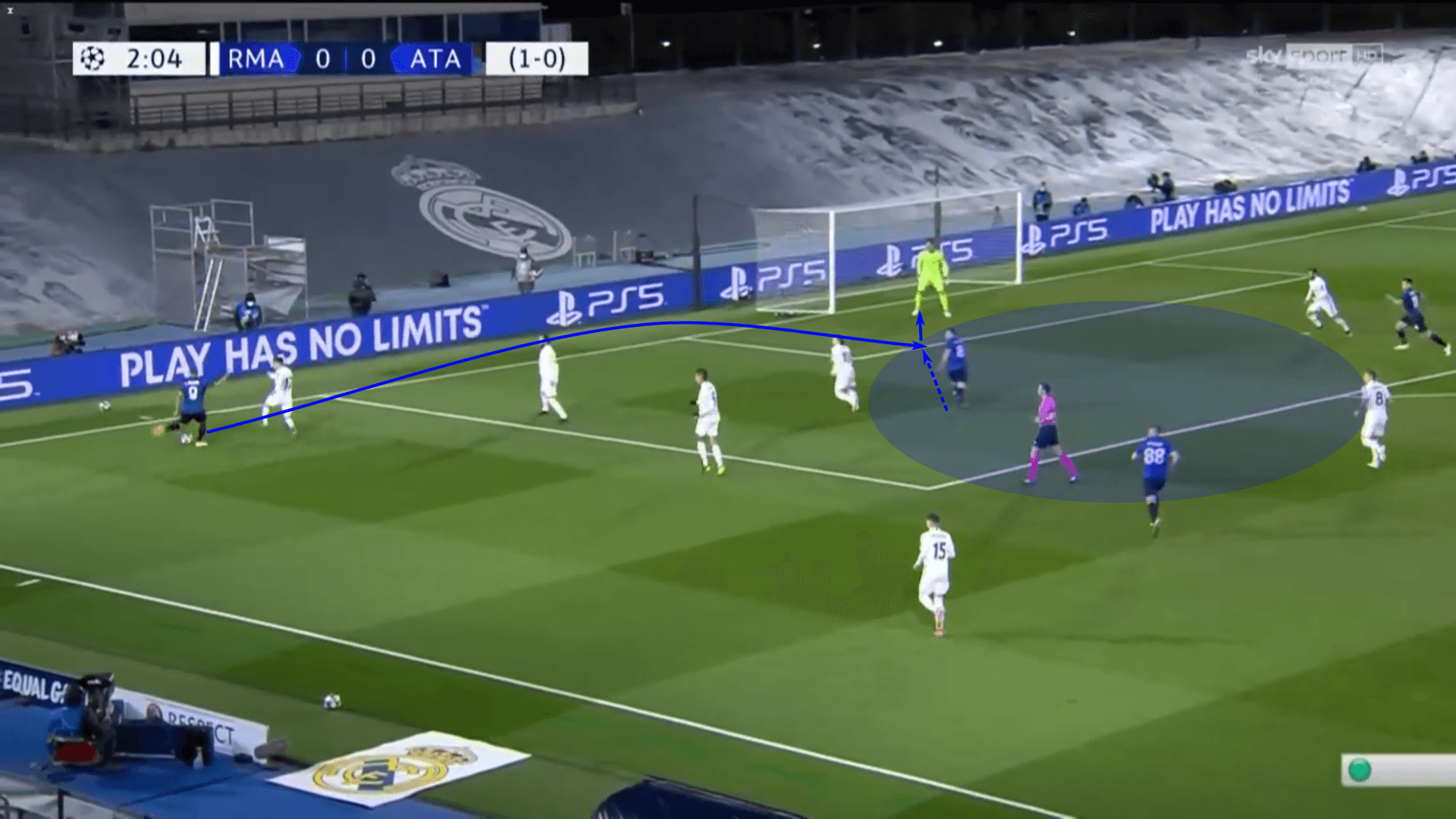 Once Real Madrid started to figure out how their 3-5-2 matched up against Atalanta, we saw them showcase much greater efficiency playing out of the back. One of the keys here was really managing the transition from defending with the back three to building out under fairly standard 4-3-3 conditions.

In the 16th minute, when Courtois had the ball, Ramos and Varane split out to the corners of the box while Vázquez and Nacho offered width. Kroos and Modrić operated in a double pivot, but if help was needed, Kroos often checked deep while Modrić occupied space higher up the pitch. 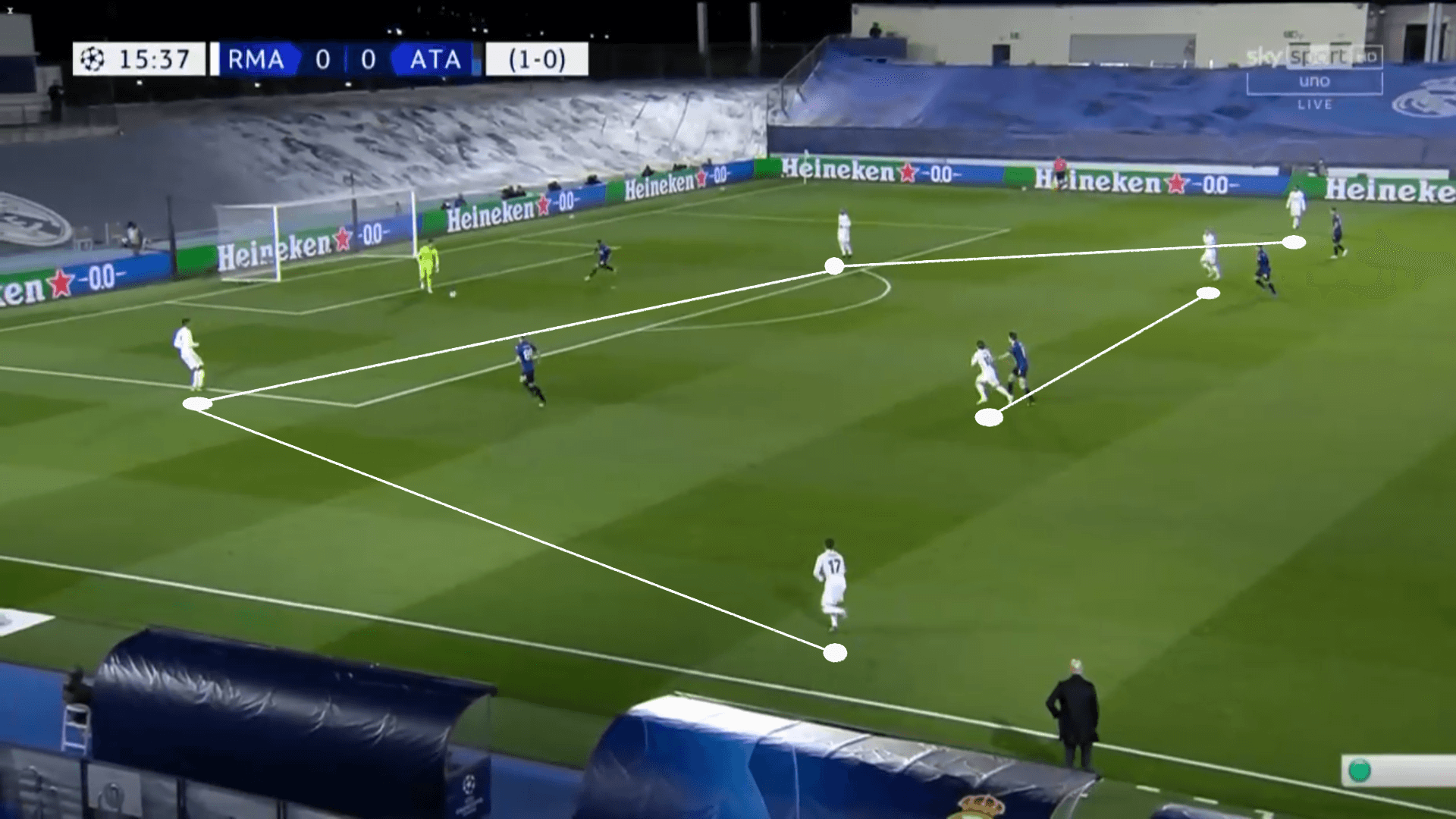 A few of the more interesting tactical notes were the inverted role of Mendy, the isolation of Vinícius Júnior on the left and a right-central overload typically featuring Benzema and Valverde. 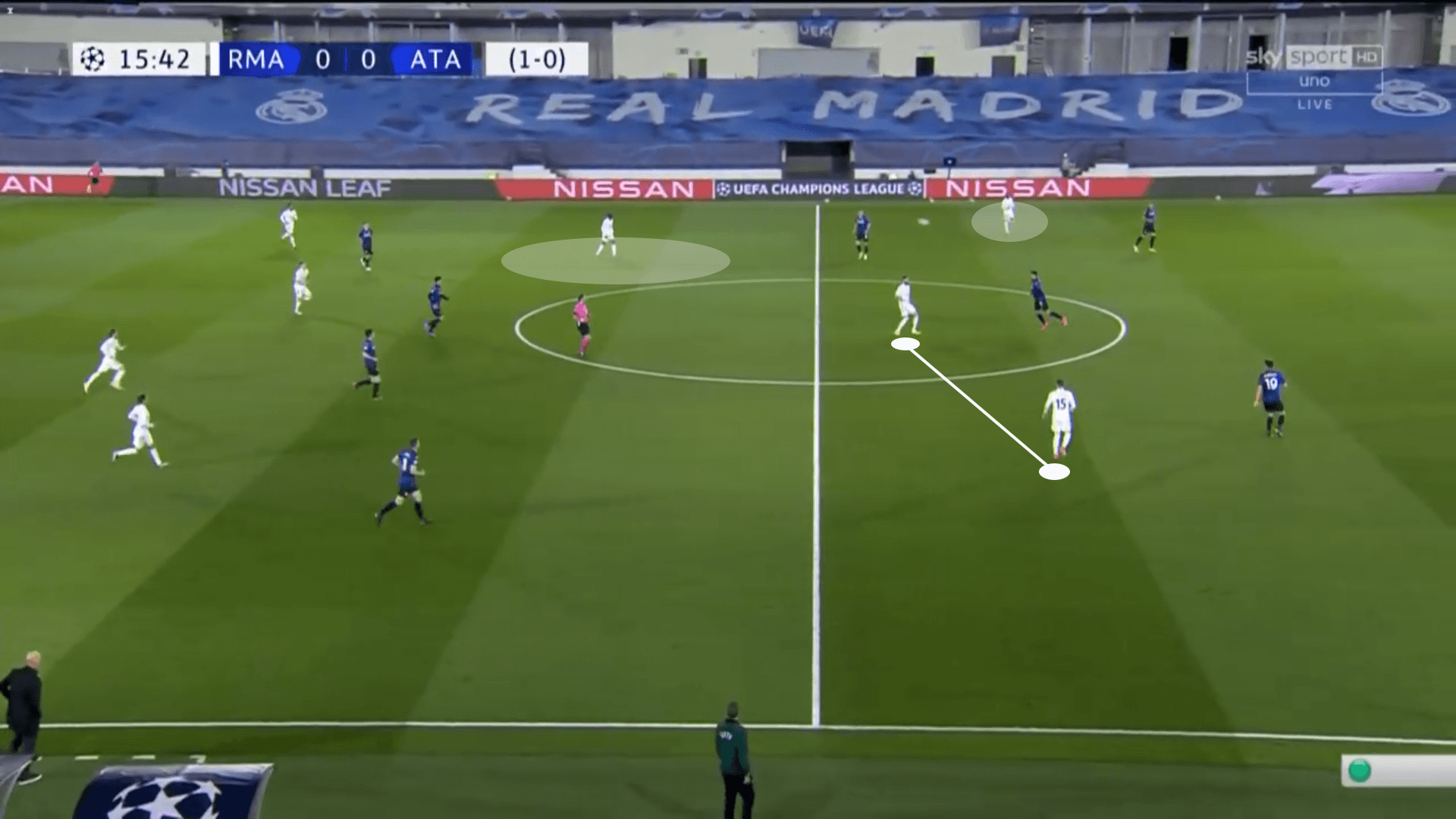 Those three tactical conditions were ordered to providing Vinícius Júnior with space to engage on the dribble. He was electric in this match. With Mendy pinching inside, he not only offered support against Atalanta’s transitional attacking, but also pulled support away from Tolói on the right. Further support was stripped from the captain with Benzema drawing Romero to the central channel.

Protecting the side against Atalanta’s counterattacking and direct possession we’re tactical keys for Zidane. Moving Mendy into an inverted outside-back role was a masterstroke in this match, especially in protecting against the central runs of Pašalić and Pessina. Further, moving Mendy into an inverted role often saw Real Madrid with six players behind the ball and gave Valverde the freedom to play higher up the pitch.

The other benefit was in transitional attacking. As Real Madrid won the ball in their defensive third, they often looked to target either Mendy or Valverde high in the half space between Atalanta’s holding mids and centre-backs. The Serie A side really struggled in this regard. For the match, Los Blancos had seven counterattacks, three of which resulted in shots, a 43% success rate. On the flip side, Atalanta had six counterattacks which produced zero shots.

Madrid’s defensive work and half space outlet passes were pivotal. In the following image, we see Real Madrid with numbers behind the ball in a low block. As Atalanta tried to force the ball into the central channel, Madrid’s backline made a fairly standard recovery and immediately played into the feet of Valverde. The end product was a process of releasing Vinícius Júnior down the wing followed by a tidy give-and-go with Benzema to set the young Brazilian up at the penalty spot. The shot went wide, but it was a warning sign for the visitors. 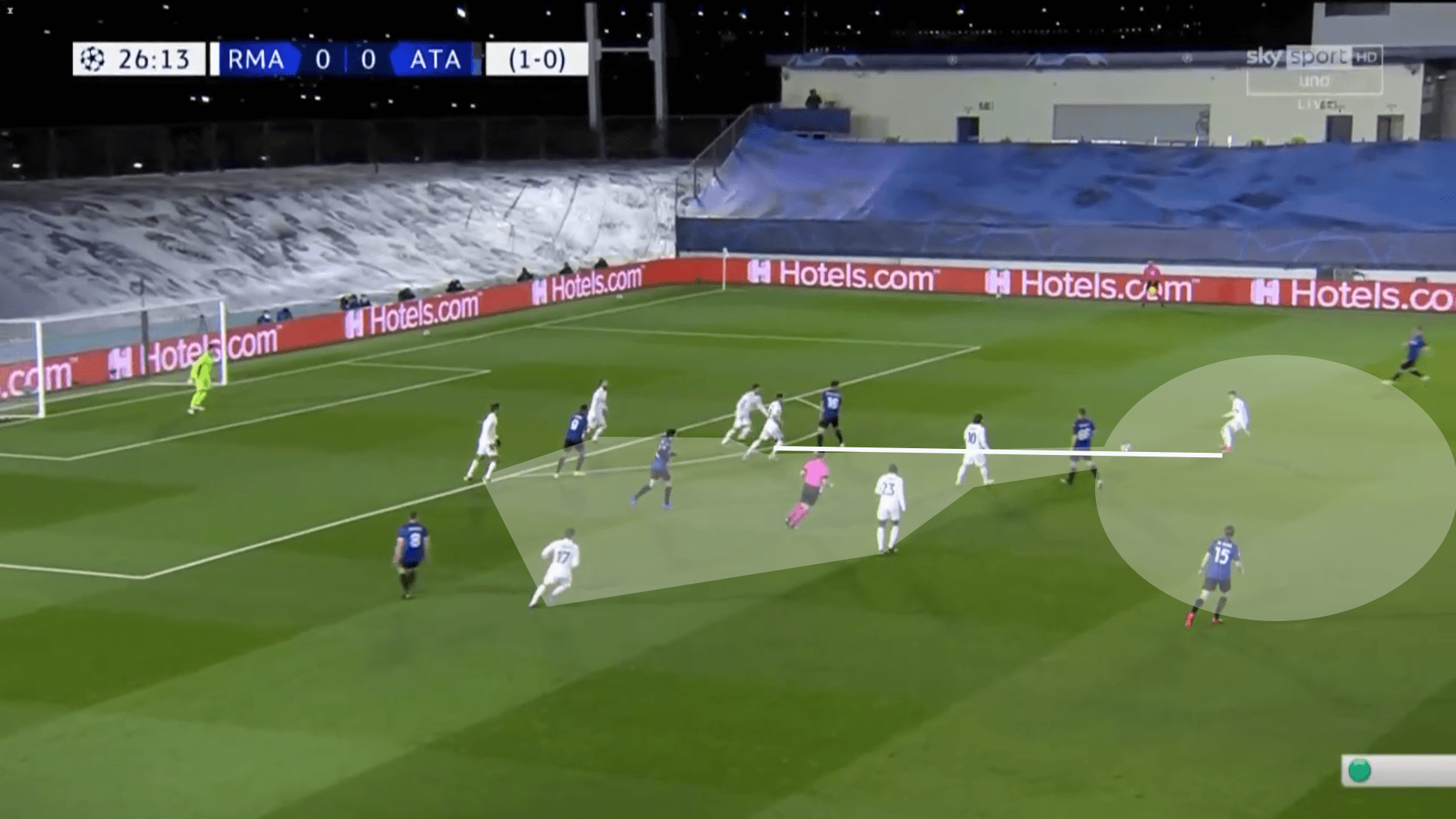 Later in the match, Vinícius Júnior was again involved, this time tracking back to make an excellent recovery and playing into the feet of Mendy. Once the Brazilian released his pass, he sprinted up the pitch knowing that Mendy could dribble forward and attract the attention of Tolói. 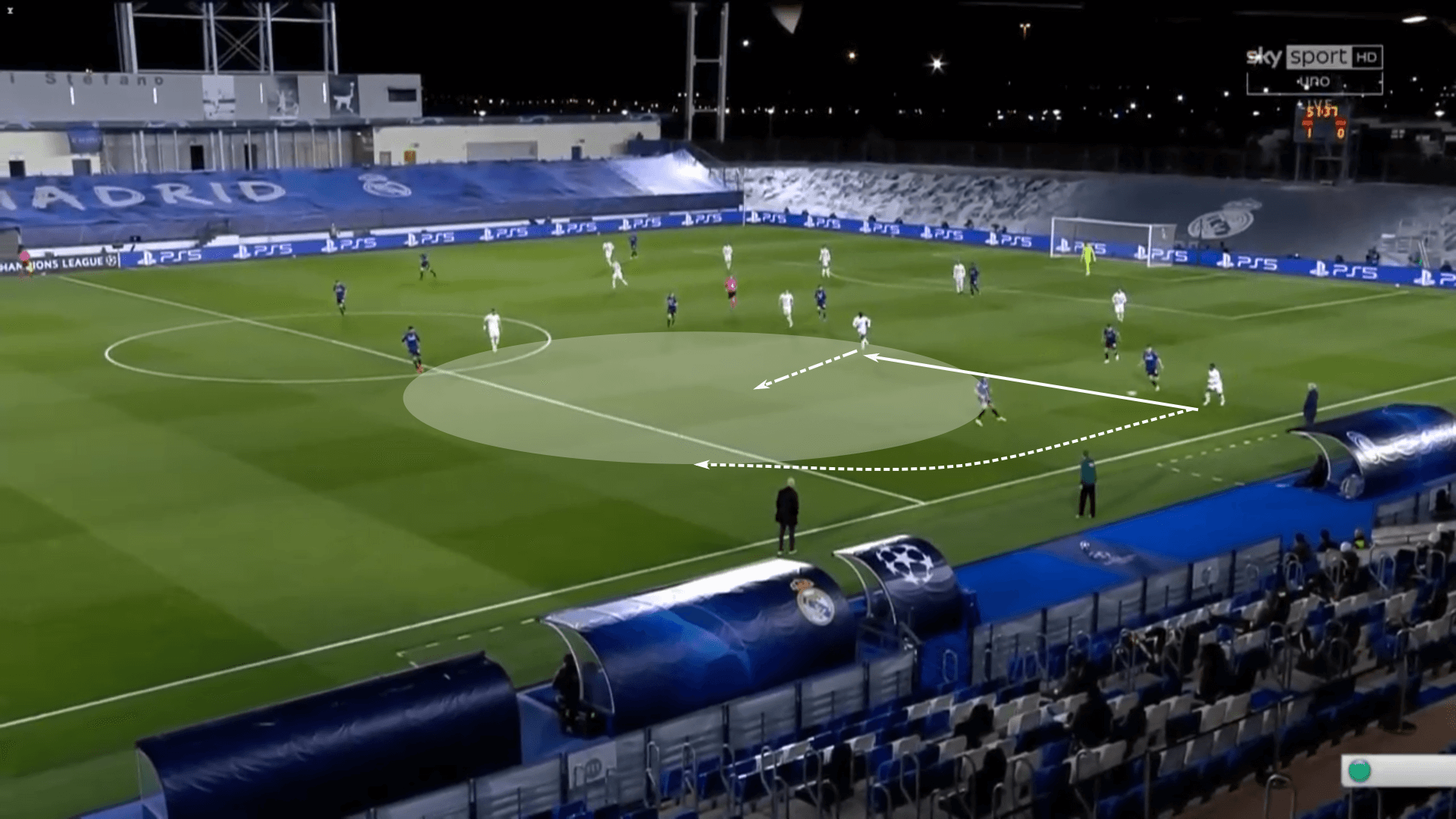 As the right centre-back stepped up to pressure Mendy, the gap between he and Romero was massive. Vinícius Júnior ran onto the through ball and somehow managed to dribble through three defenders before shanking his 1v1 attempt. 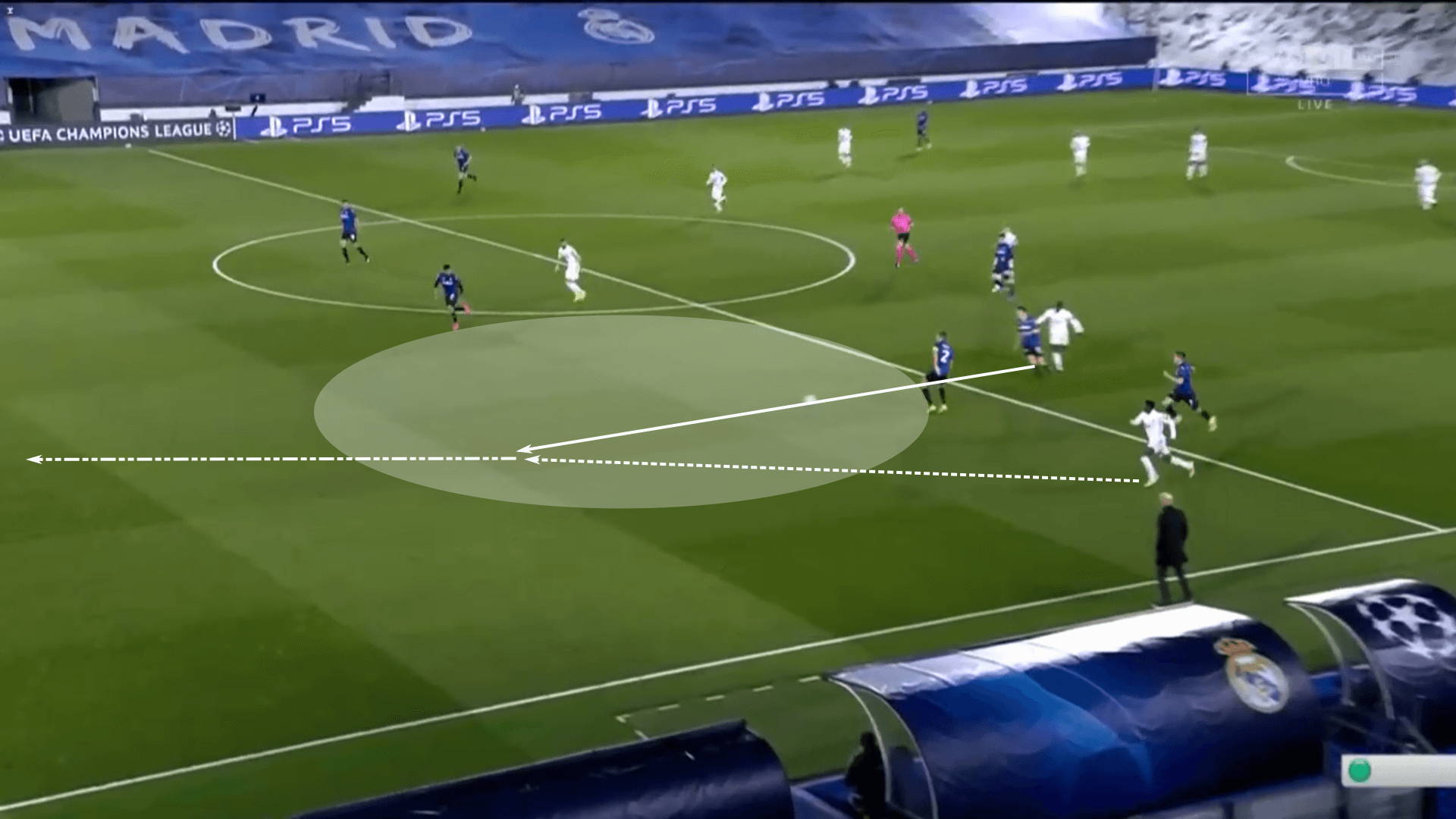 As mentioned, Vinícius Júnior was an absolute livewire in this match. Whether he was dribbling at Tolói or running behind the backline, he was a constant thorn in Atalanta’s side. Mendy and Valverde receiving the ball high in the half spaces helped to draw out the Atalanta backline and the work of Benzema to occupy Romero centrally can’t be ignored either. Vini Jr was so active because Benzema consistently forced Romero centrally. That left Tolói isolated for most of the match, which certainly favoured the La Liga side.

For their part, Atalanta did start to find some success in transitional moments once Ramos left the pitch, but at that point, it was too little too late.

As we see in most top tier competitions, it’s the mistakes that are decisive. That was certainly the case in this match. The first goal of the match was cut exactly from that mould.

As Atalanta looked to build out of the back against Real Madrid’s high press, Sportiello received the ball in his box and looked to play forward as Benzema applied pressure. Unfortunately for the goalkeeper, he hit the ball directly at Modrić, who did brilliantly to control the ball and set up Benzema’s opener. 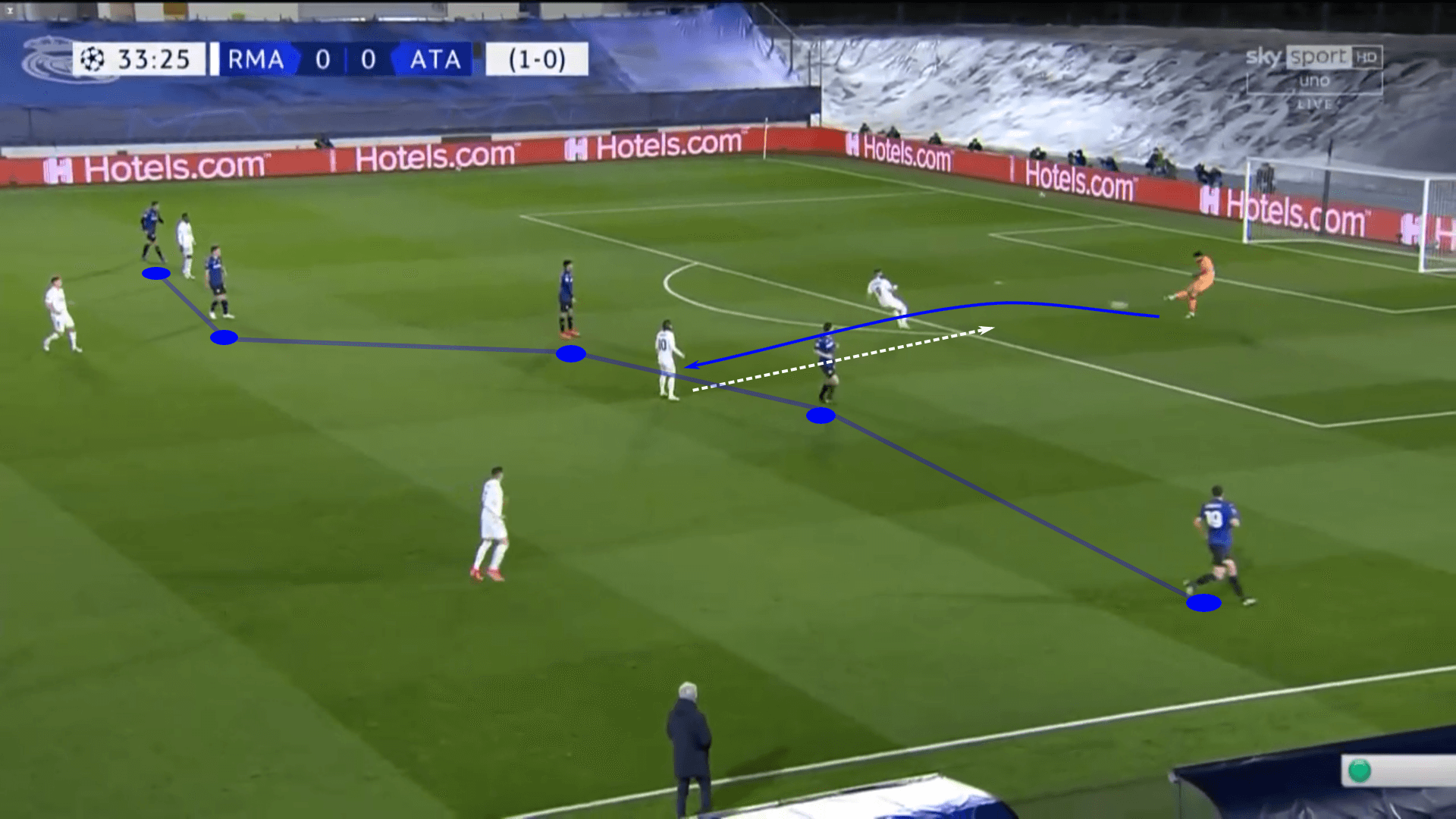 One of the issues in the sequence was the support offered to Sportiello. Looking at Atalanta’s five deepest field players, they’re virtually in a straight line. Although they offer width, there’s virtually no staggering of the lines to help La Dea beat the first line of the press. With no short options, Sportiello was forced to play long. Had the centrebacks dropped deeper towards the corners of the box, they would not only have given their keeper short options, but they would have also forced Real Madrid’s press to become more expansive, creating space for either Pessina or de Roon to check centrally.

From a different angle, we can see that even the high targets were well-marked. The odds of completing a pass under these circumstances would have been very low. Further, there are acres of space between Atalanta’s lines, so a second ball recovery in the midfield from Real Madrid would have immediately put Atalanta under duress. 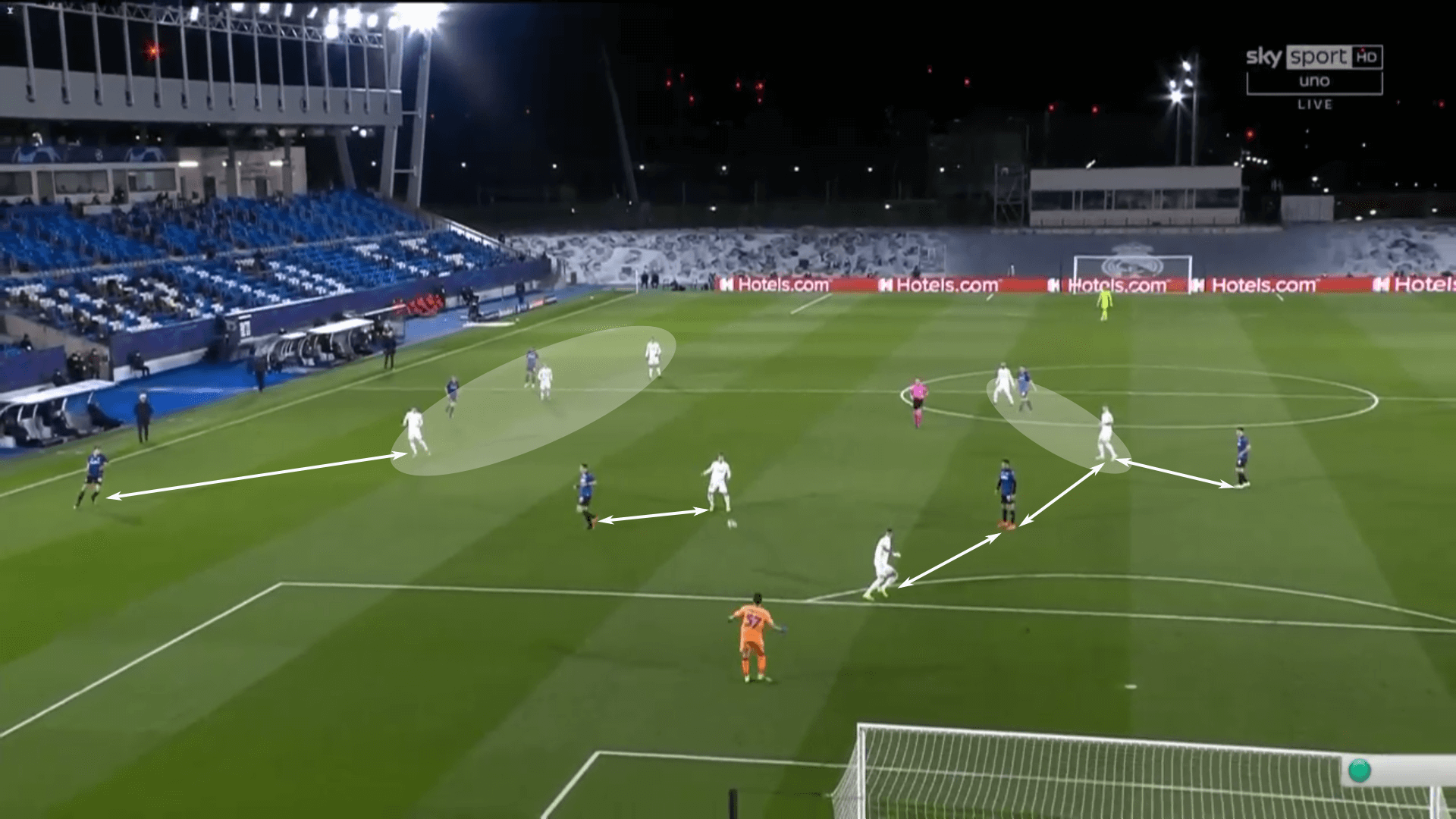 On the second goal, Vinícius Júnior’s aggressive run set up a Ramos penalty kick. We’ll take a look at the foul in just a moment, but the buildup to the foul is significant as well.

Again, it’s a transitional moment that spells doom for Atalanta. The ball is poked beyond the central midfielders, right into the path of Vinícius Júnior. Malinovskiy was beaten by Vinícius Júnior’s pace and de Roon was caught too far wide to recover. That left Tolói as the lone defender to engage Vinícius Júnior. 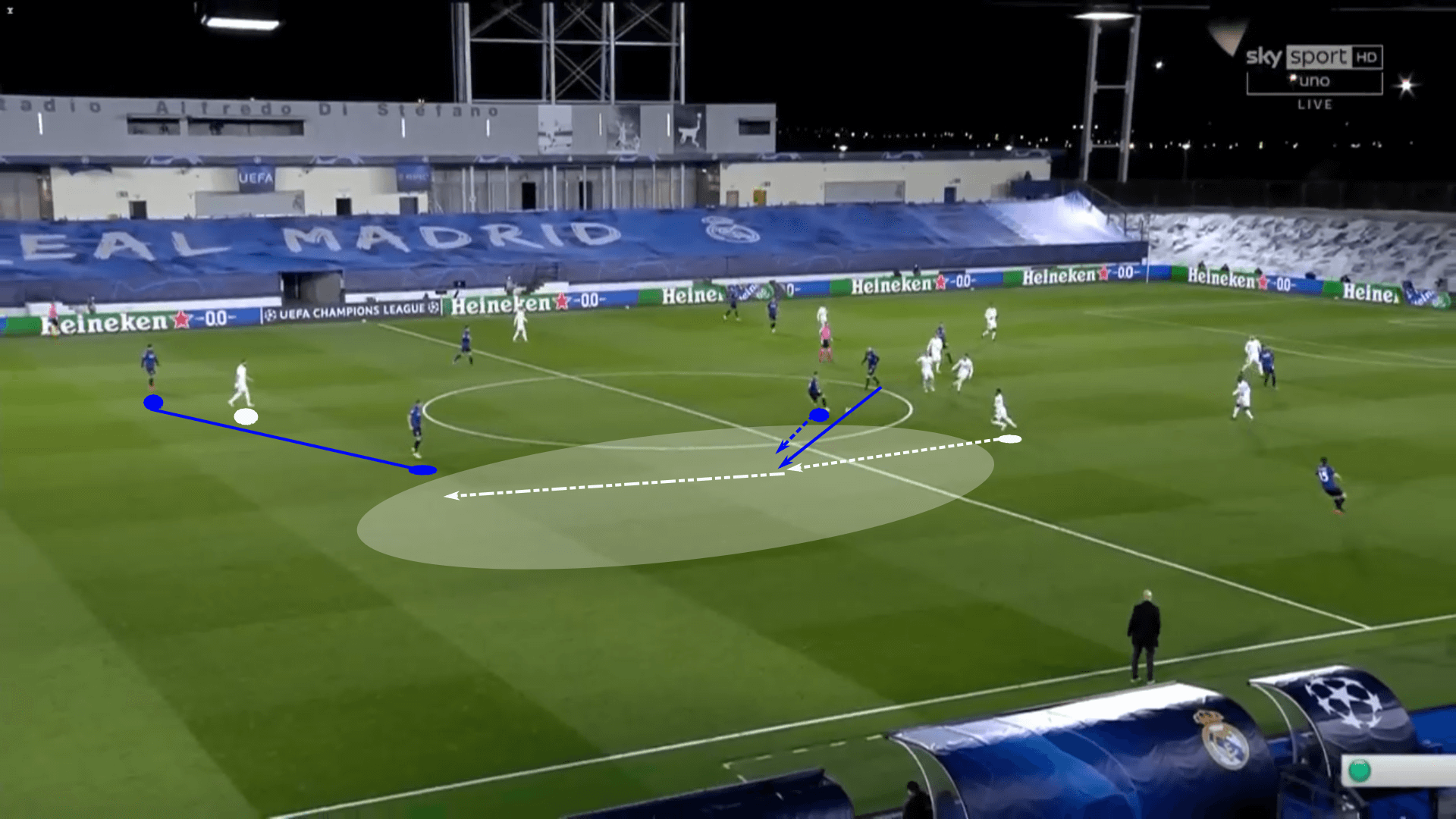 Just before the foul, we saw Tolói try to take away access to the central channel, and Vini Jr’s preferred right foot, through his approach. However, as you can see in the image, as Vinícius Júnior approaches, Tolói is off balance as he waits for Vinícius Júnior cut left. 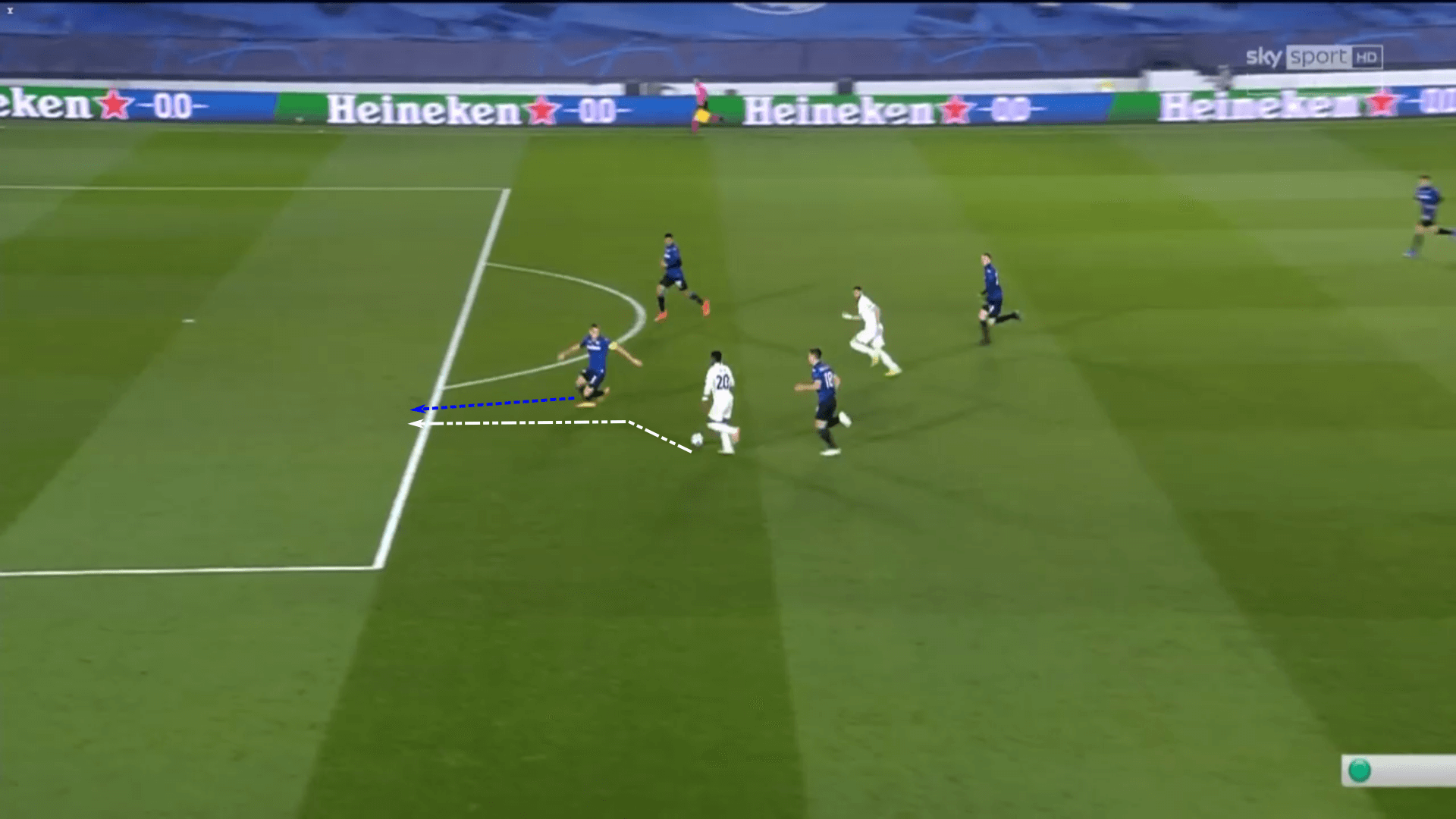 With his weight on his back foot, Tolói was already beaten, leaving him with the options of fouling the young Brazilian or letting him sprint into the box. Contact occurred just inside of the 18, which kept Tolói on the pitch, but effectively put the tie to bed.

While Atalanta’s mistakes loom large in this match, it is important to note that Zidane’s tactics and the status of the tie were major factors. As the game progressed, Atalanta naturally took more risks.

Rewatching the match while researching for this analysis, one of the standout points was Zidane, once again, showing tactical adaptability while maintaining philosophical fidelity. The change in shape and the way he connected the roles was a catalyst for their success, as was his ability to negate Atalanta’s attacking threats while simultaneously creating better attacking conditions for his stars up top. While he’s not a coach with a highly-defined, rigid system, his ability to make small tactical tweaks to get the best out of his players and pinpoint the opponent’s vulnerabilities was on display in this match.

Real Madrid move through to the quarterfinals with this 4-1 aggregate victory. They’re the lone La Liga representatives heading into Friday’s quarterfinal draw. Given the league’s overwhelming success in this tournament, they’ll likely enter their quarterfinal matchup as the underdogs. If the players can feed off their coach’s knack for surprises, they’ll be a tough out for whichever team draws them. 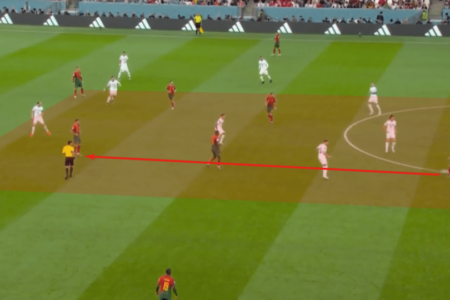 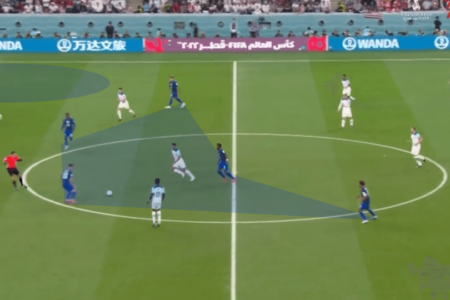