With all the hype and drama surrounding the proposed Super League, Jose Mourinho’s sacking as Tottenham’s head coach just a few days before the EFL Cup Final probably did not receive as much attention as it should have. Although Ryan Mason did win his first game in charge against Southampton in the Premier League, the final was only his second game in charge in his entire managerial career. This was in stark contrast to Pep Guardiola, who was now in his fourth consecutive EFL Cup final with Manchester City. Guardiola had overcome city rivals Manchester United in the previous round with relative ease and were surely the favorites heading into the tie. The odds were heavily stacked against Spurs, and in this tactical analysis we take a look at the tactics of both Manchester City and Spurs and our analysis will show how Guardiola’s tactics saw City win their first trophy of the season. 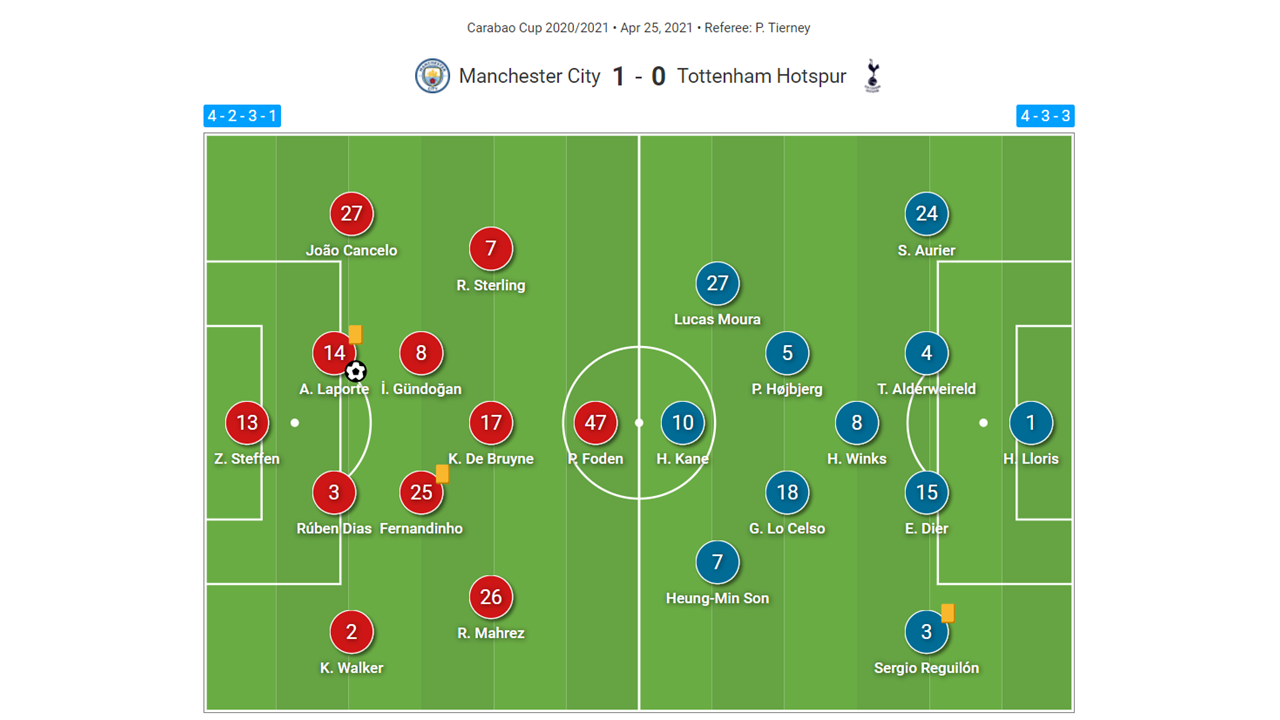 For Spurs, it was the 4-3-3, with Hugo Lloris in goal, behind Serge Aurier, Toby Alderweireld, Eric Dier, and Sergio Reguilón in defense. Harry Winks, Giovani Lo Celso, and Pierre-Emile Højbjerg started in midfield, with Tanguy Ndombele surprisingly left on the bench. Upfront, it was the trio of Heung-Min Son, Harry Kane, and Lucan Moura that led the attack. 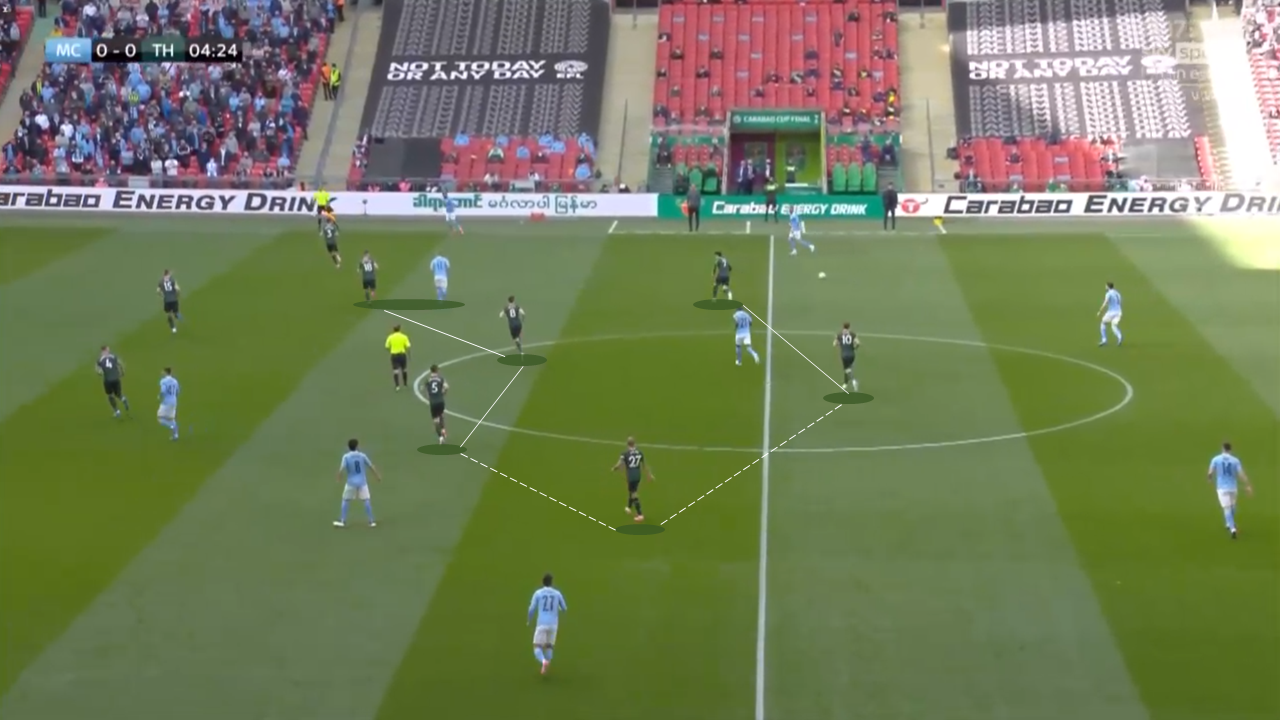 From the onset, it was clear that City were going to dominate possession, with Spurs looking to stay compact defensively to see out any attack. Spurs maintained their 4-3-3 structure when the ball was with the City center-backs, but as the ball progressed into their half, Spurs switched to a 4-4-2, with Moura dropping into the midfield. City look to play in the 2-3-5 formation off the ball and understandable, have many players in the midfield areas. Mason’s tactics clearly looked to cover this aspect, dropping his men into midfield in order to match City numerically in the middle of the pitch. 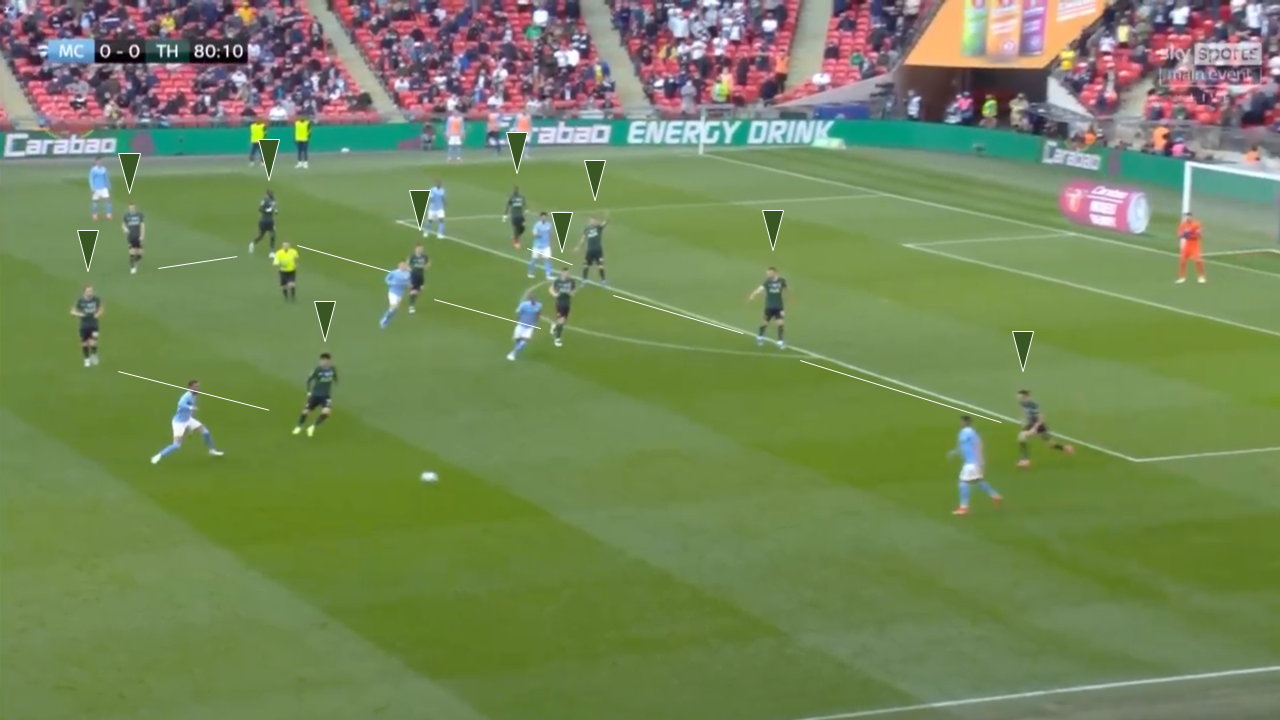 As mentioned, Spurs looked to maintain a very compact structure, forcing City to utilize the wings as opposed to central areas of the pitch. Their defensive line visibly got deeper as the game progressed and the side were forced into a low block, with the midfield line just ahead of the defense in order to minimize the pockets of space around the edge of the box. Son and Kane also dropped deep within their own half so as to prevent the deeper-lying City midfielders from operating in any space. While the tactics were good in that they pushed City wide, this often did not deter City. With tricky wingers like Mahrez and Sterling supported by the likes of Cancelo and Walker down the wings, City could also rely on the likes of De Bruyne, Foden, and Gündoğan to move out wide and aid in ball rotations down the flanks. This meant that City were still a threat from these areas out wide and were also regularly winning corners or even set-pieces, one of which they eventually scored.

Spurs did not have firm enough defense to see out City’s threat from the wings and despite resolute defending for over 80 minutes, they ended up conceding.

How did City dominate possession and break the lines? 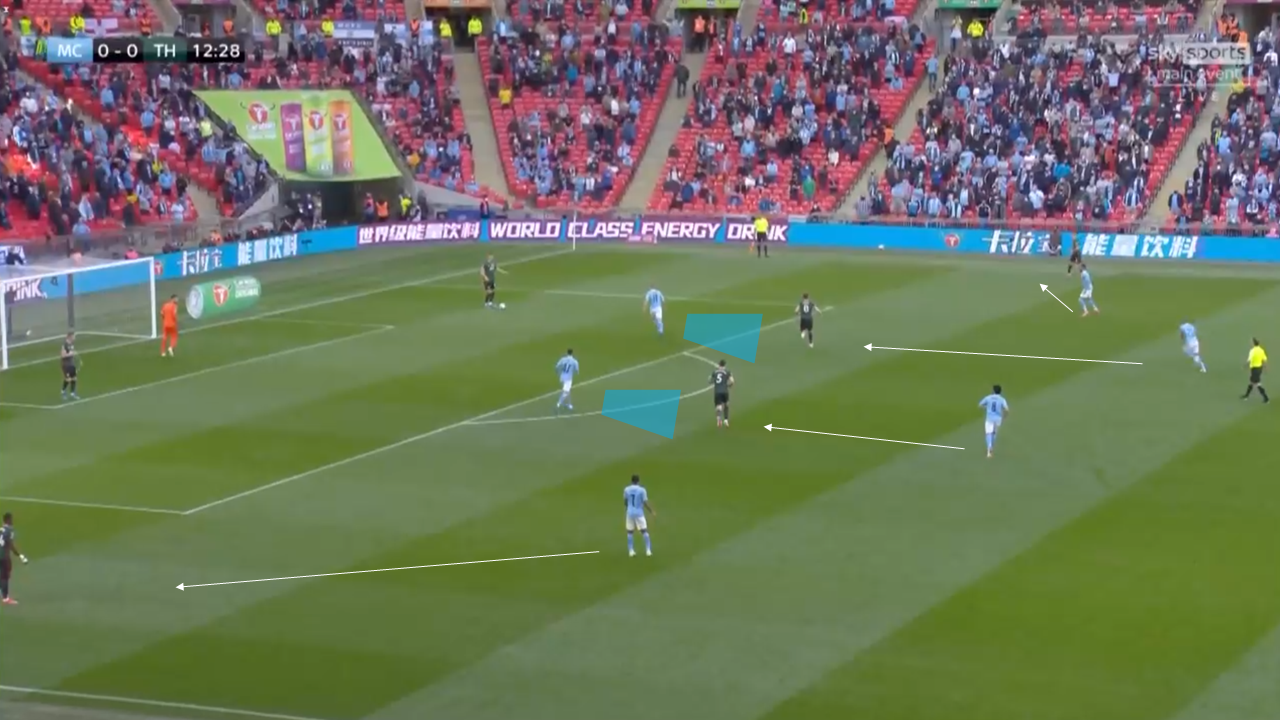 The stats clearly show City’s domination of the ball, with Guardiola’s side having 63% of possession in the game. However, their ability to hold the ball came from their set-up off it. As Spurs looked to build out from the back, City maintained their 4-4-2 structure, with De Bruyne and Foden keeping the Spurs pivots in their cover shadow. This prevented the pass directly to them and the goalkeeper had to play directly to the center-backs. De Bruyne and Foden would now aggressively press the ball carrier while still keeping the pivots in their cover shadow, with Fernandinho and Gündoğan also moving ahead to press the pivots in case the center-backs manage to play past their attackers. This forced the center-backs to play the ball out wide, where they would be met by the City wingers, or long to their forwards, and in this case, City could seek to win the aerial ball and regain possession. Spurs found it difficult to hold possession due to this and this meant that City could play how they liked, with the ball at their feet. 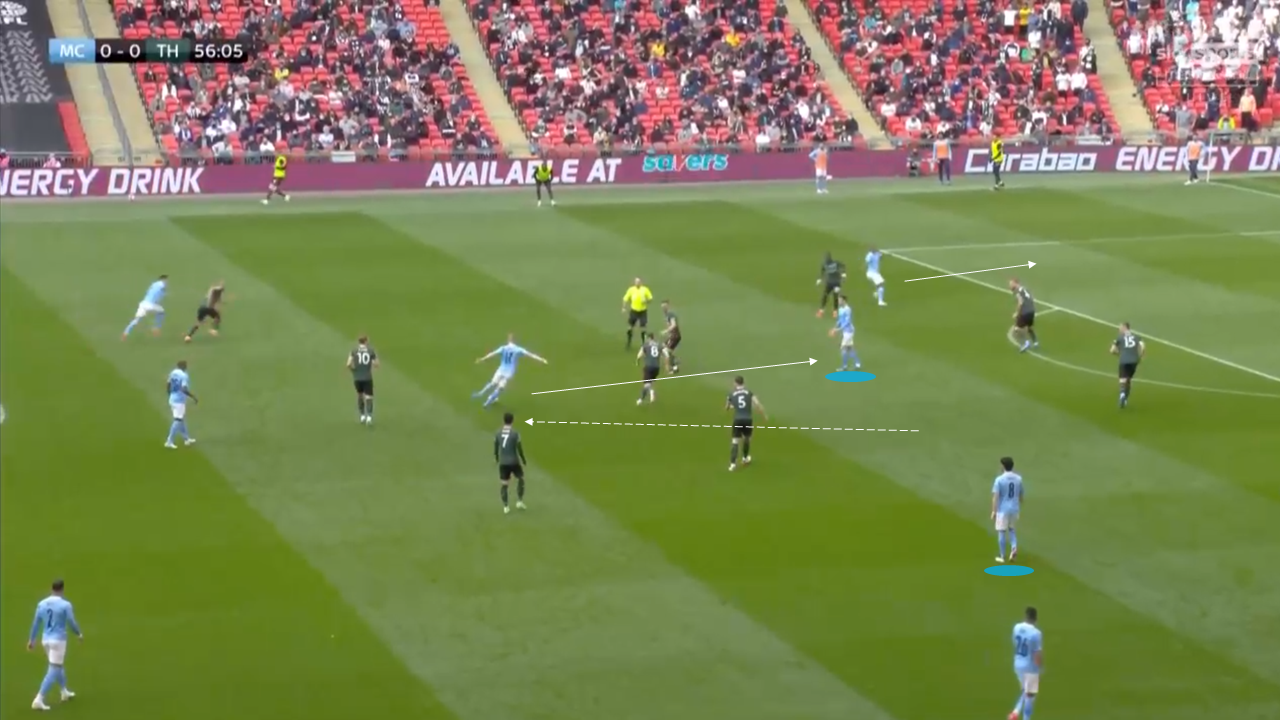 Now, once they had the ball at their feet, City looked to break the lines in order to find their goal. We mentioned how Spurs aimed to push City wide but obviously, the threat of attacking through the center is larger, and hence City aimed to find ways to pass through the compact Spurs structure. One of De Bruyne or Gündoğan would drop slightly deeper to receive the ball while the other, along with Foden, would move between the midfield and defensive line of Spurs. The ball carrier would have by then drawn a Spurs player or two out of position, creating space momentarily for their teammate between the lines. This allowed them to play quick passes through the center between the lines, and the ball receiver could then quickly move the ball down the wings with Sterling and Mahrez providing width to stretch the backline.

While City still ended up down the wing, this was a better method of doing so compared to being forced down the wing by Spurs as in the latter case, the defense is able to organize themselves to deal with an attack from the flank. With City playing this way and breaking the lines, Spurs had to regroup quickly and could often be caught out leaving spaces that the City players could look to exploit. This certainly led to some chances for City, with the wingers able to receive and cut in dangerously before finding room for a shot or a pass in the box. 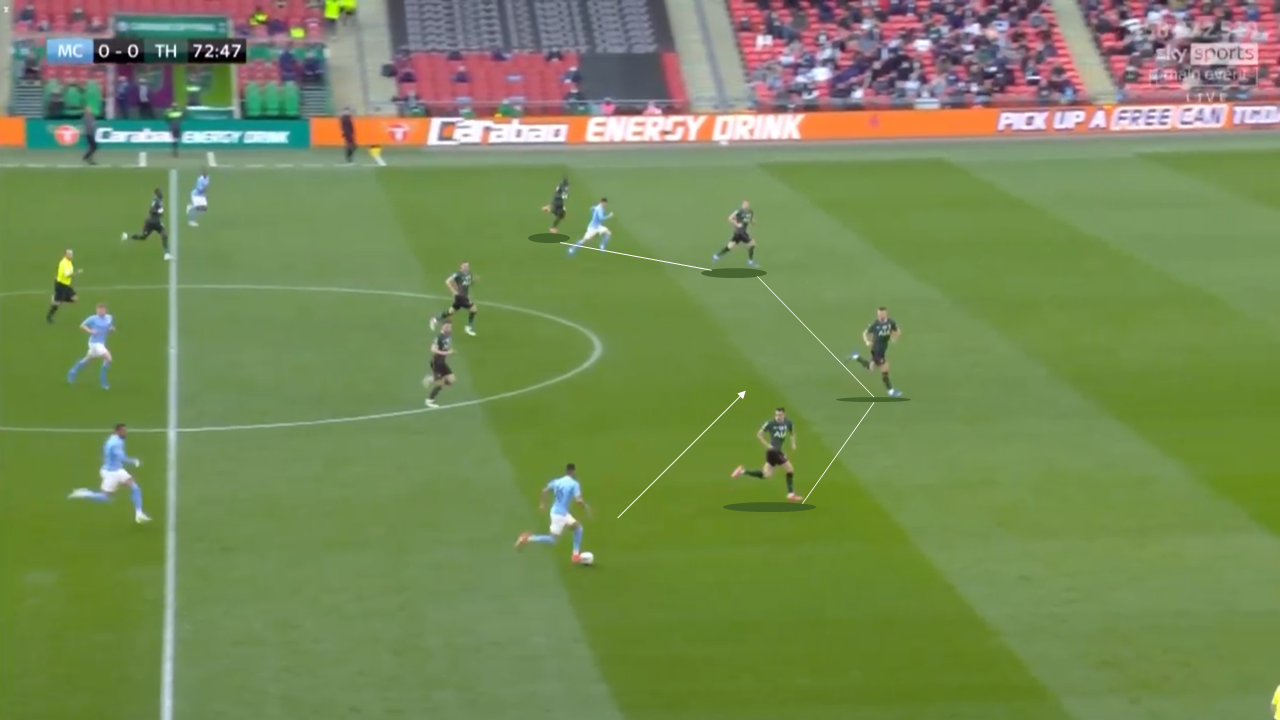 Another way that City looked to break the lines was using quick transitions. Spurs proved to be ineffective in attack, often losing the ball in the opposition half and City looked to make the most of this. Often within one or two passes, they would look to release their winger, allowing them to stretch the Spurs defense in the transition while also giving them a free run at the Spurs backline owing to the compactness of the Spurs midfield. There would not be a Spurs midfielder close enough to engage the winger, meaning that he often found himself in loads of space. City also looked to have their wingers cut in, something that Sterling and Mahrez are excellent at. Rather than moving wide and taking on the full-back, Guardiola’s side moved centrally, engaging the center-backs and attacking the half-spaces. While City could not make the most of these quick transitions, it did see them create shooting chances that troubled Spurs and enabled them to pile on the pressure. 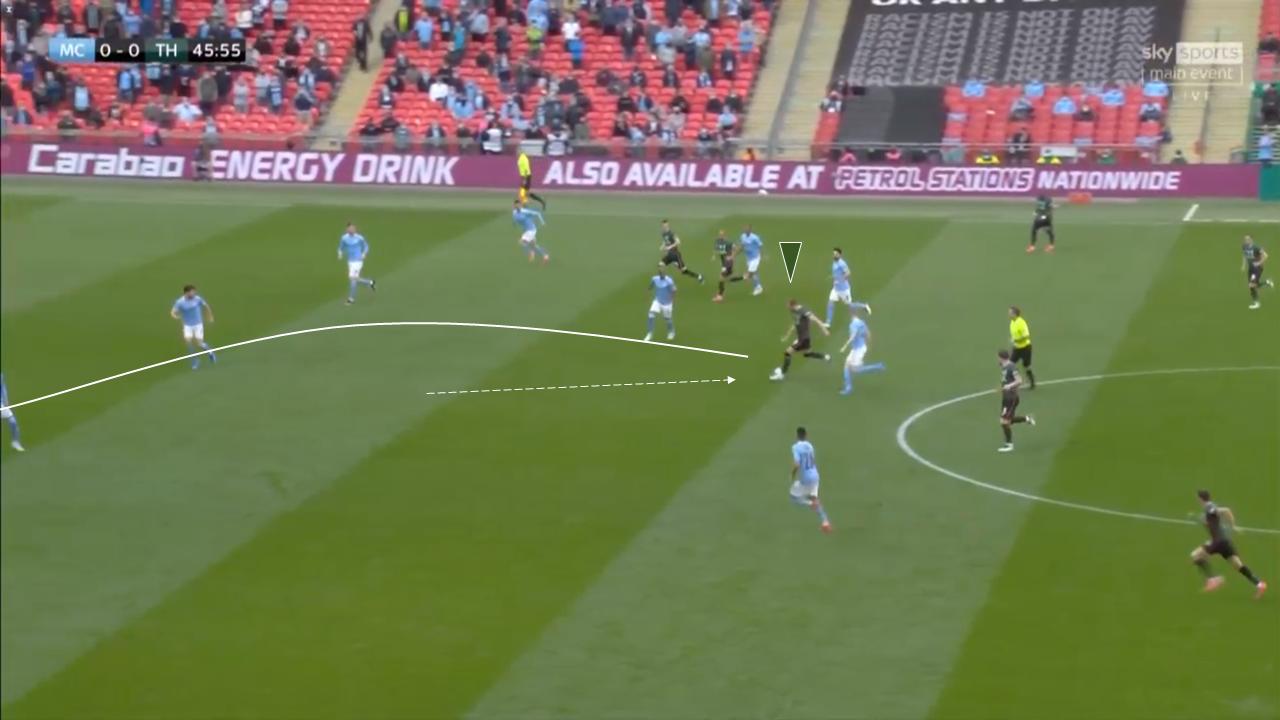 Spurs’ attacks were often very one-dimensional, with Kane having to act as a creator after dropping deeper to receive the ball. He would then look up to find Son who would provide width in attack with the aim of stretching City’s defense. This was, however, something that Guardiola had clearly prepared for, with his defenders quick to fall back upon loss of possession and along with Fernandinho, effectively had five players behind the ball to defend. While Spurs were looking to attack the spaces left by the City full-backs when they moved to the 2-3-5 formation, they were too slow in transition to capitalize on the spaces and could not regularly threaten the opposition. 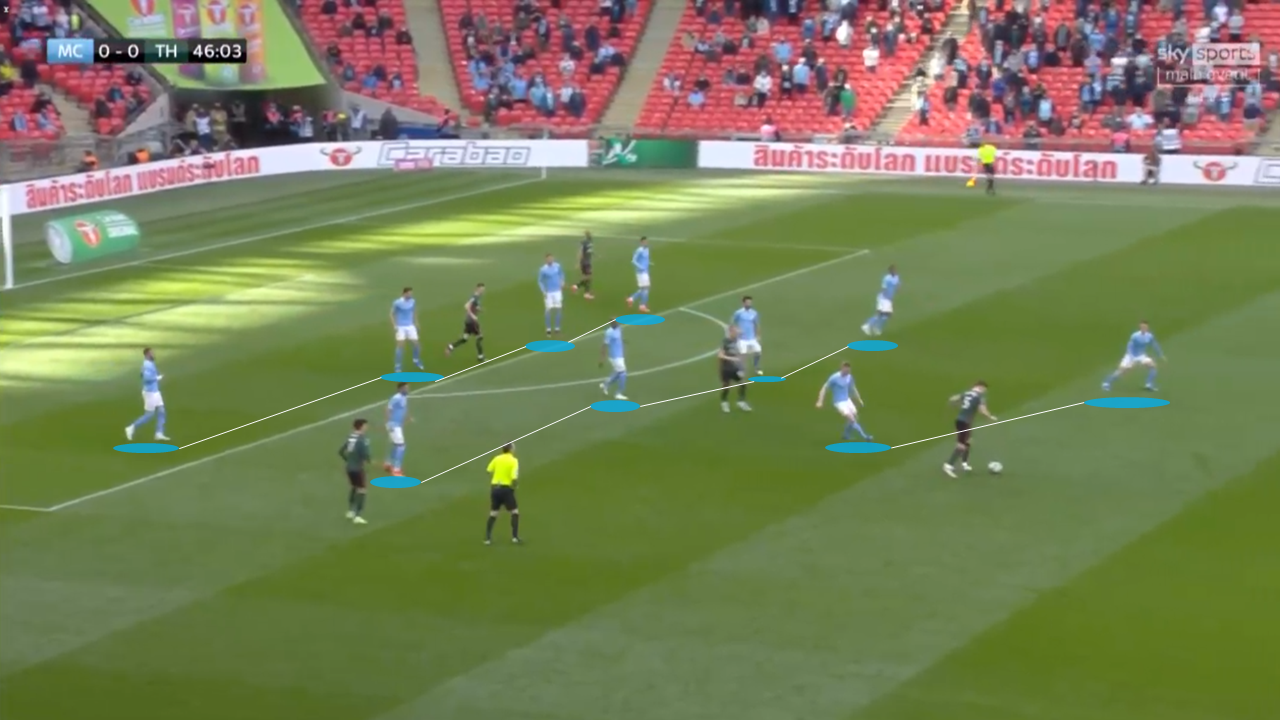 Even as the side looked to hold possession, as in the above scenario after playing the ball out wide to Son, City would move into a compact 4-4-2, very similar to Spurs’ setup and this meant that Spurs had to push the ball into the wider areas. The side, however, lacked the same quality as City in these areas, and with Lo Celso not able to provide a creative option through the middle either, Spurs never looked threatening. Despite the fact that his shot was Spurs’ only one on target, Lo Celso’s selection over Ndombele did not prove to be a good one, with the Argentine unable to rotate the ball well down the wings with his wingers and full-backs nor provide line breaking passes through the middle. This played right into the hands of City, who were unthreatened by Spurs’ attack and made life for the likes of Kane and Son very difficult. Mason’s side managed just two shots on goal, both from distance with only Lo Celso’s really forcing a save from Steffen in goal. With no real opportunity to score and being put under pressure for most of the time by a strong City side, it was only a matter of time before City converted one of their 21 shots and although only four were on target, Laporte’s header was enough to seal the trophy.

It was always going to be an uphill task for Mason to take on one of the best sides in Europe in just his second game, but Spurs never really posed a genuine threat in the final. They failed to create any clear-cut goal-scoring opportunity and without having anything to throw at City, were forced to defend for large periods of the game. While it seemed like they may have done enough to last the 90 minutes, some poor defending from a set-piece out wide gifted Laporte and free header which he converted with ease, and City comfortable sealed their fourth consecutive EFL Cup in a row. They look all set to wrap up the title in the next few game weeks as well and face PSG in the semi-finals of the Champions League, another trophy that they could potentially win this season.

As for Spurs, they lie five points behind Chelsea in fourth with five games to play and two behind West Ham in fifth. A spot in the newly founded Europa Conference League seems more likely for Spurs but they would be hoping that they can at least fight for a spot in one of the top two tournaments across Europe.