Bayern Munich Women hosted Chelsea Women in the UEFA Women’s Champions League semi-final and this first leg witnessed a very competitive match that ended with a 2-1 win for Bayern Munich which gives the advantage for the German team ahead of the second leg that will be played on May, 2 at Kingsmeadow stadium.

Sydney Lohmann opened the scoring at the 12th minute, the former Bayern Munich and actual Chelsea’s player Melanie Leupolz succeeded in equalising for the Blues at the 22th minute before the Swedish Hanna Glas added a beautiful second goal for Bayern Munich.

In this tactical analysis we will break down both teams’ tactics to get further insight on why Chelsea were not as effective as in the past few matches in terms of attacking and how were Bayern Munich able to put on a strong and balanced performance while providing an analysis on Chelsea and Bayern Munich’s individual performances.

Jens Scheuer preferred to start the match with a 3-5-2, a formation that Bayern Munich did not use since the 2018/2019 season. This sudden change of tactical shape had its impacts on the game and we’ll shed more light on this below. Scheuer relied on Laura Benkarth as a goalkeeper, Amanda Ilestedt, Marina Hegering and Simone Laudehr in defence, Hanna Glas and Carolin Simon as wingers, Sydney Lohmann, Sarah Zadrazil and Lina Magull as central midfielders with both Lineth Beerensteyn and Klara Bühl as strikers, leaving Lea Schüller on the bench.

On the other hand, Emma Hayes chose to go for the 4-1-3-2 formation with Ann-Katrin Berger as a goalkeeper, Jessica Carter as a right-back instead of the injured Maren Mjelde, Millie Bright and Sophie Ingle as centre-backs with Jonna Andersson as a left-back.

The midfield was formed of three players to give more security to defence and have more players in midfield to support the attack while keeping the balance. In attack, Melanie Leupolz remained more often in front of the defence as a defensive midfielder, while Ji So-yun was a bit more advanced and Guro Reiten played as a left midfielder who advanced quite often. While when out of possession, the three of them retreated to help in getting the ball back and avoiding Bayern Munich’s attacking threat. And upfront, Pernille Harder alternated between playing as a second striker alongside Sam Kerr and playing as an advanced playmaker at times, with Fran Kirby playing on the right wing. 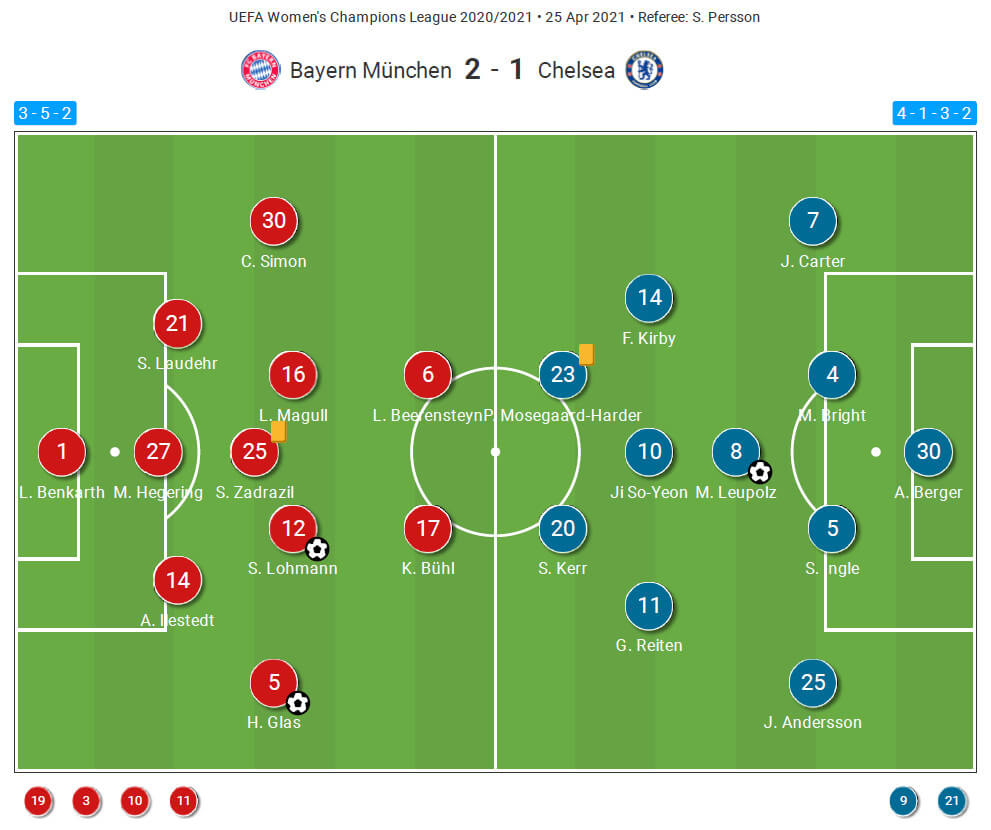 Chelsea faced an intensive play from Bayern Munich since the start of this match and this created some problems for their attacking phase. Bayern Munich defended with aggressivity and with instant marking as soon as Chelsea’s players got the ball. Moreover, surrounding the ball holder with two or three players each time made passing options less concrete for Chelsea’s midfielders and attackers and enabled Bayern to intercept the ball more often. Bayern players intercepted the ball 52 times in this match while Chelsea made 34 interceptions, and these numbers highlight Bayern Munich’s superiority in closing down Chelsea’s players effectively in this game as it also means that this new 3-5-2 formation suited Bayern Munich from a defensive perspective and playing with the right mentality plus the required intensity enabled Bayern players to minimise Chelsea’s attacking danger. 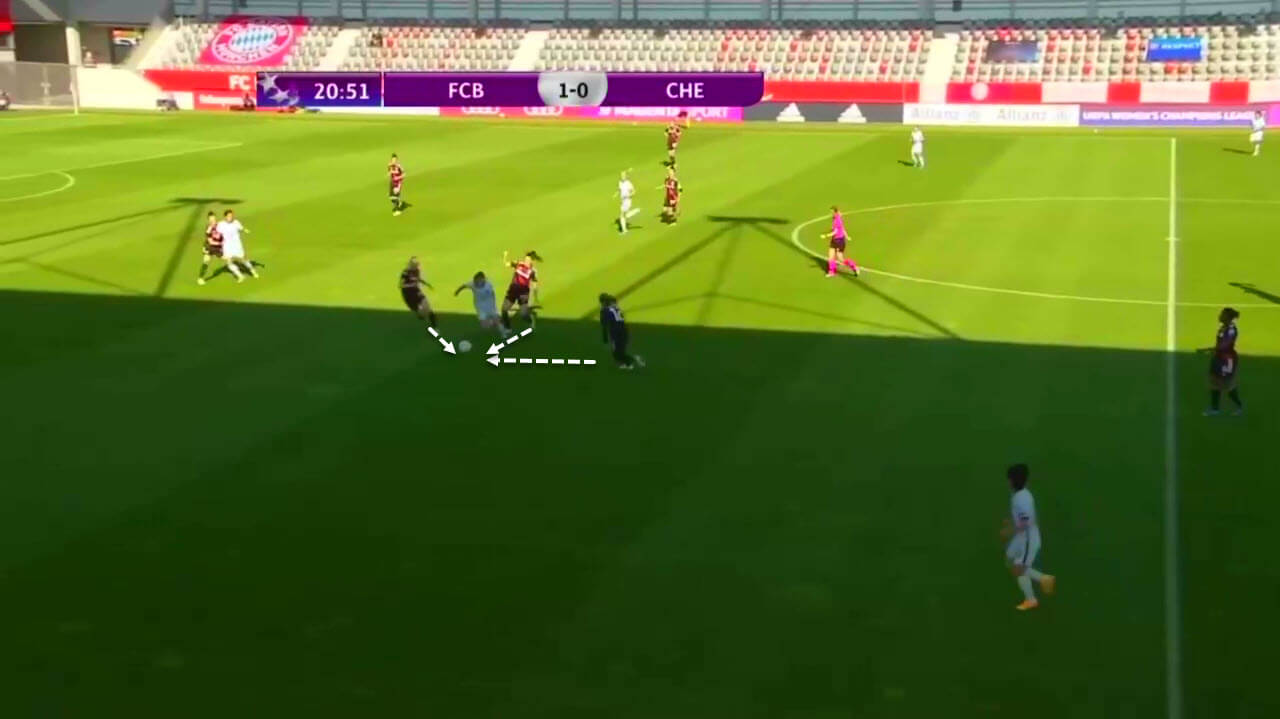 Playing with an extra midfield player and reducing the number of attackers to two, allowed Bayern Munich to have numerical superiority in many occasions like the one shown above, and this obliged players like Harder, Reiten and Kirby to retreat and receive the ball in midfield to help in linking defence to attack since Bayern Munich’s midfield “wall” prevented Leupolz, Ji, Andersson and Carter from finding adequate passing lanes. It is obvious here for example how Kirby dropped to give Ji a passing option but despite that, Bayern’s midfielder was attentive enough to disturb her and not allow her to turn and advance. 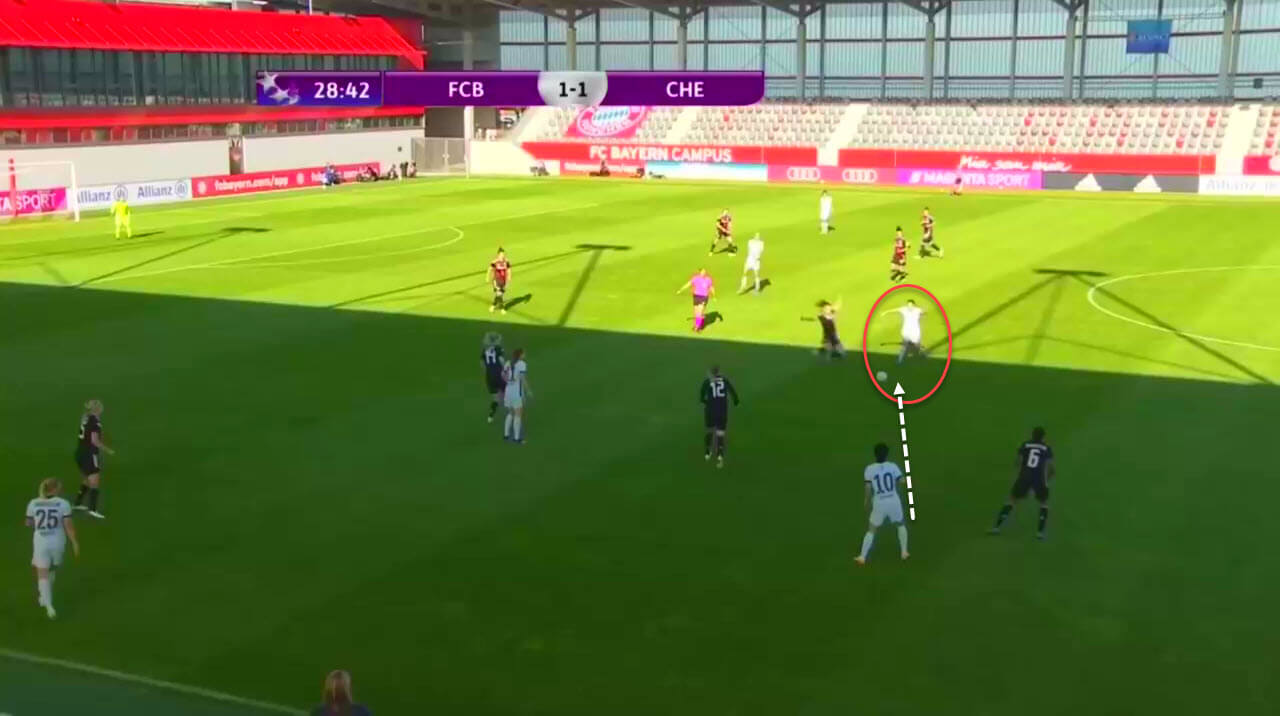 Moreover, Bayern Munich were aware of Andersson’s threat on the left flank since as opposed to Carter who is more defensive, she was relied on to advance more often with Reiten, Ji and sometimes one of Kerr and Harder supporting her on that left wing. However, Bayern players marked Andersson tightly throughout the match and we saw her surrounded by two or more players almost each time she gets the ball and tries to advance, which obliged her to pass backwards so often, like in this example. 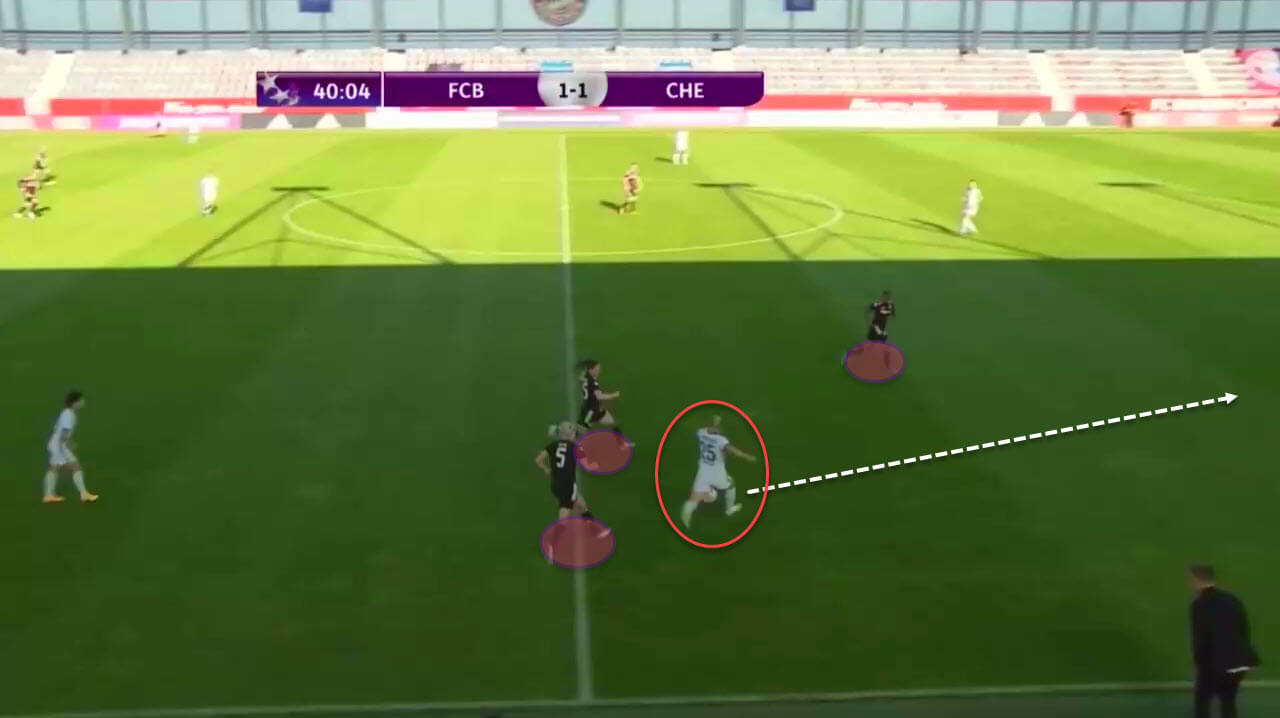 This led Chelsea to resorting to long-passes at the back of defence to Kerr or Harder since this weapon can be very effective given both players’ pace and physical strength, and also due to Bayern’s tight marking. In this regard, Ingle, did not forget about her midfielder characteristics even though she played as a centre-back. She provided some key crosses to Chelsea’s attackers at the back of defenders yet they did not exploit these chances in the desired way. Chances like the one shown below highlight Ingle’s vision and passing accuracy since she saw Kerr asking for the ball and crossed it immediately towards her. 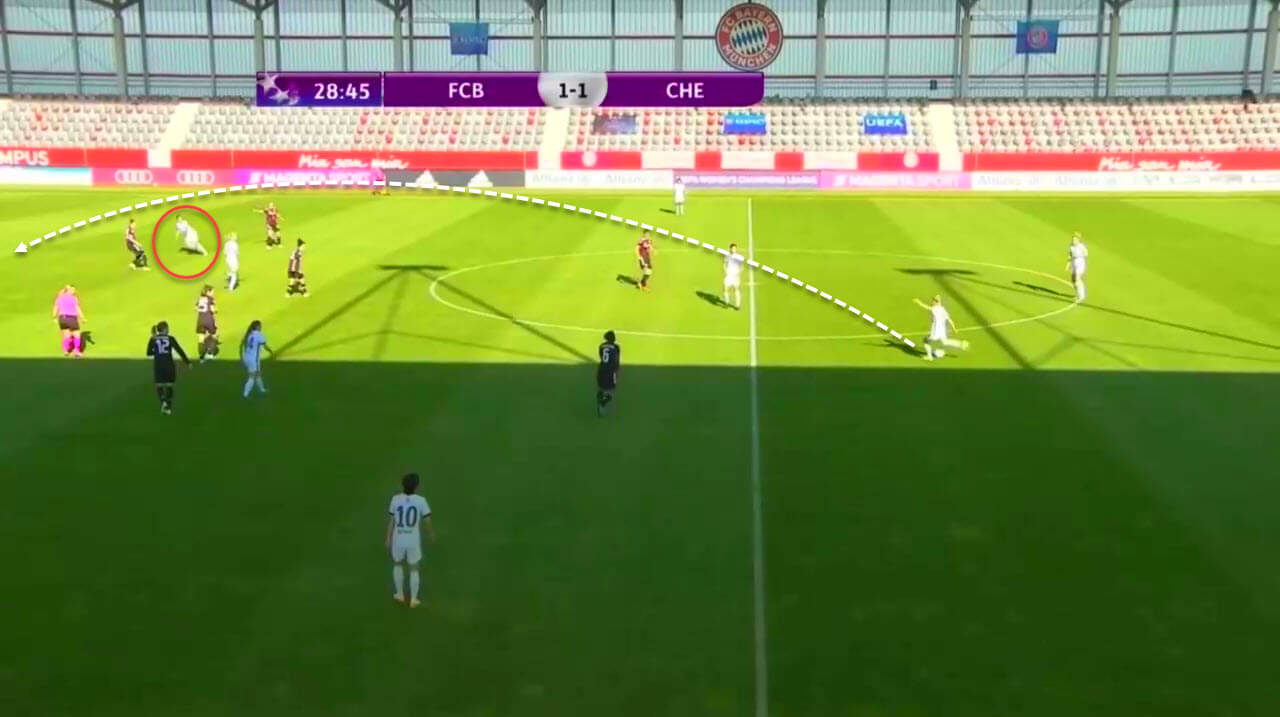 However, Hegering’s defensive reaction stood out in this action since she blocked Kerr’s shot with a well-timed sliding tackle to save her team from a clear goal-scoring opportunity and prevent Chelsea from concluding a well-played attack. 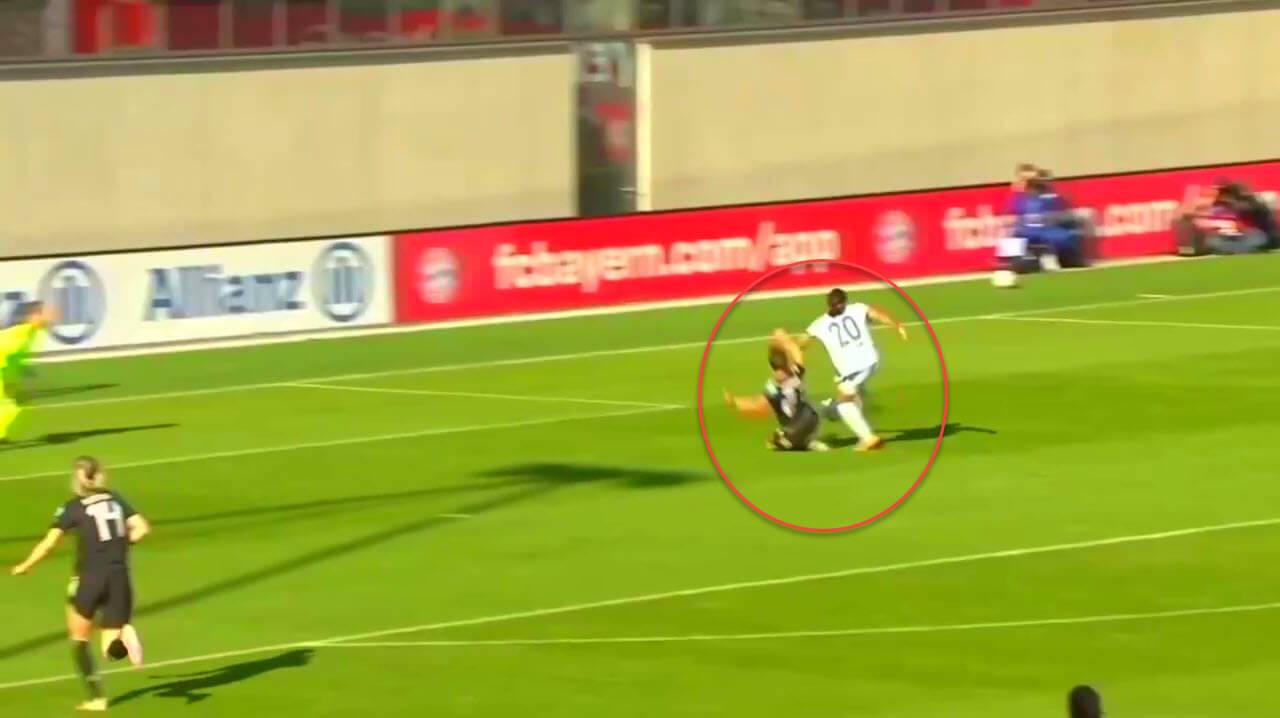 It needs to be said though that Chelsea played much better in attack following their equalising goal that came thanks to Reiten’s effort and free-kick which hit Leupolz and got in. It was also very interesting to see how Harder dropped to receive the ball in midfield so often and then she made triangular combinations with either Kirby or Reiten who often came closer to her, and this was another Chelsea’s weapon to beat Bayern Munich’s solid defence. These penetrations from midfield by Harder were important in disrupting Bayern’s defence since Harder’s moves were unpredictable, it was unknown if she would play a one-two with Kirby, with Reiten, with Kerr or with another player. 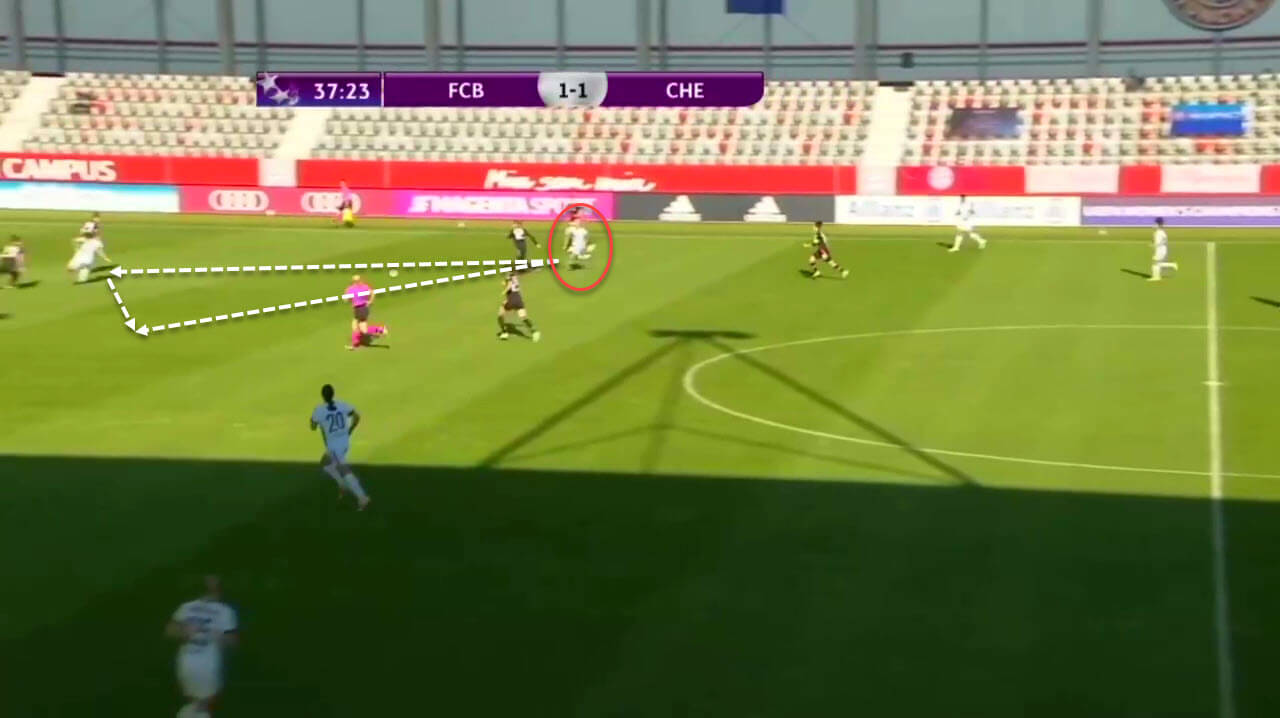 Chelsea had a fairly larger part of possession with 61.16% and 38.48% for Bayern, and although this is a positive statistic for Chelsea, it is at the same time telling of Bayern’s strategy in this match; letting Chelsea have the ball more often but defending very well and exploiting any counter-attacking chances while playing quick football when having possession. Nevertheless, 38.48% was too little for a team like Bayern even though they succeeded in reducing Chelsea’s attacking danger despite them having a lot of possession.

Both teams reached the goal several times but the two of them had many shots off target, each team had only two shots on target out of ten for Chelsea and out of nine shots for Bayern Munich.  And this shows that they both were not often focused enough in the final third and at the same time it means that both defences were aggressive enough to disturb attackers and oblige them into shooting off target.

Bayern Munich waited for Chelsea most of the time in their own half and preferred to secure their defensive lines instead of pressing high and therefore risking to leave a lot of space at the back of their defence. This was often the case whenever Chelsea had the ball and this strategy worked to some extent for Bayern since the only goal they conceded was from a set-piece and all the danger that Chelsea were able to create, was countered by a very organised Bayern’s defence. 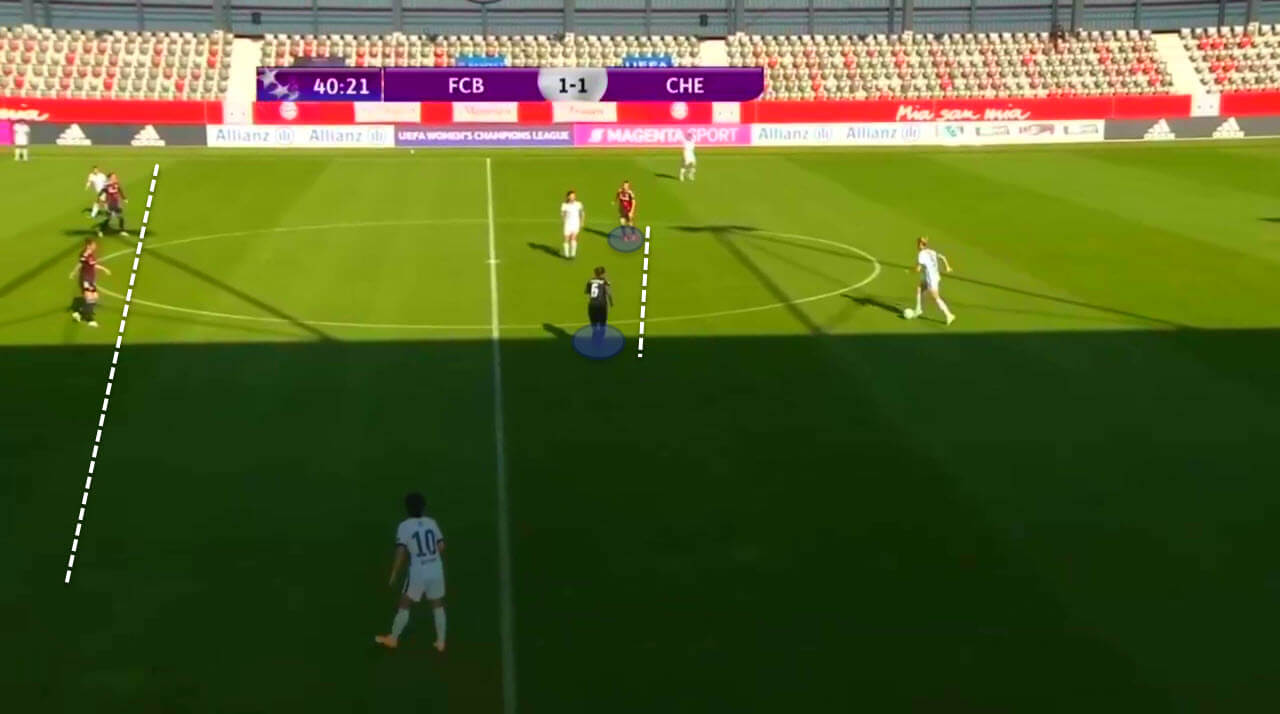 And when they were in possession, Bayern Munich relied heavily on Glas on the right wing to advance continuously and provide attacking depth with the support of Simon, Beerensteyn and Bühl who waited inside the box whenever Glas had the ball on the right wing. Also, Magull and Lohmann have continuously joined the attacks and as you can see in this picture, Magull was almost on the same line with Beerensteyn and Bühl while waiting for crosses. And let’s not forget that one of Glas’ crosses in the first-half was the source of Bayern’s first goal following Berger’s clearing mistake. 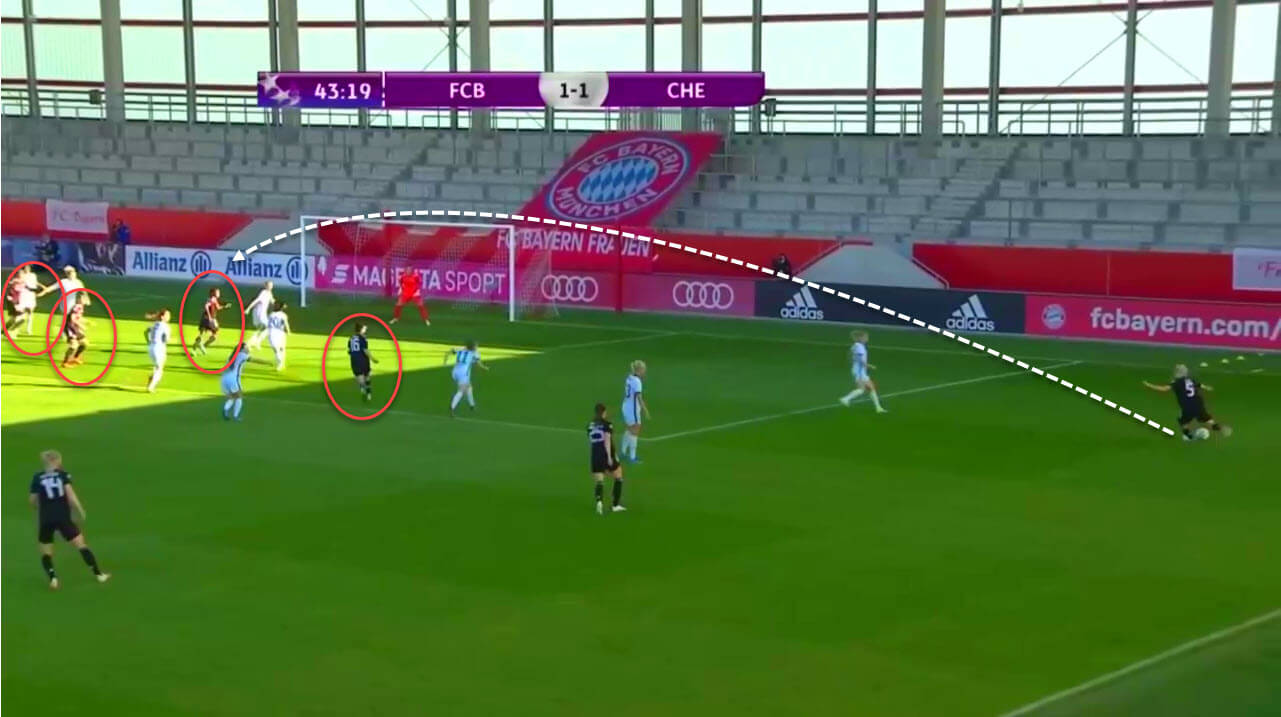 Then, Glas’ goal in the second-half proved that this player can be very dangerous when given even some free space since she fixed Chelsea’s defenders and decided to shoot without hesitation and with great precision to confuse Berger who did not see the ball at first. This was Bayern’s second shot on target and this fact highlights this team’s realism and ability to score goals out of half-chances even against big teams like Chelsea. 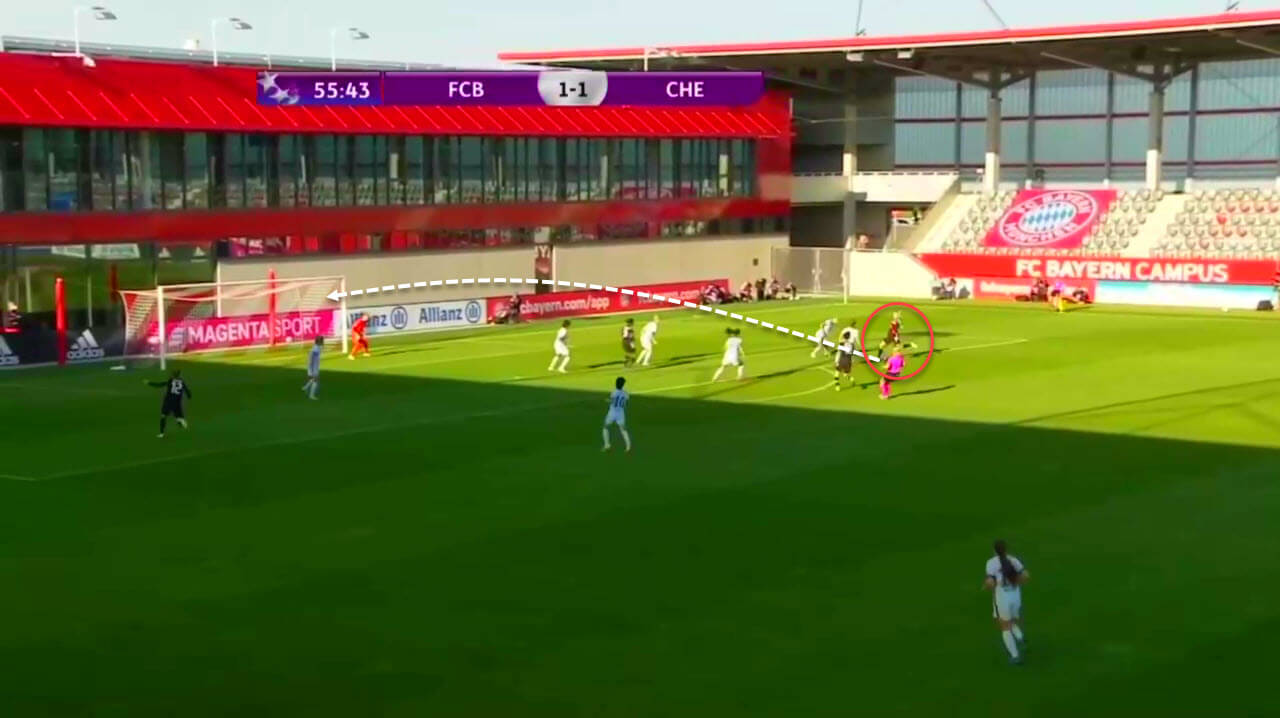 The 3-5-2 formation suited Bayern Munich in this match and allowed both Simon and Glas to advance so often while having their backs covered even though at times, we saw both of them retreating on the same line with the three defenders to make the formation 5-3-2 instead of 3-5-2. This tactical fluidity helped Bayern Munich in coping with the different situations of the match even though they did not attack a lot especially after scoring the second goal. And playing according to these ideas in the second leg would be risky for Bayern since Chelsea will most probably be more dangerous in attack and aim at scoring goals, and this would not favour Bayern if they keep on playing defensive football solely without making considerable attacking attempts.

With one of Paris Saint Germain or Barcelona waiting in the UEFA Women’s Champions League final, Bayern Munich and Chelsea will certainly give their all in a decisive match next Sunday to determine who will play the final even though Bayern Munich is having a slight advantage on aggregates following this first leg, thanks to their solid defending and finishing realism. Yet, everything is possible in the second leg and Chelsea have got all the necessary means to turn the table and qualify especially if they reach the final third more often in the next encounter and be more decisive in front of the goal.