Chelsea vs Bayern: How Hayes should use her attacking weapons to gain a first leg advantage – tactical preview

Chelsea Women and Bayern Munich Women will face each other next Sunday at the FC Bayern Campus in one of the most highly-anticipated games of the season, as this will be the first leg of the UEFA Women’s Champions League semi-finals. The winner of the two legs will then qualify to the final of the competition for the first time ever, facing either Paris Saint Germain or Barcelona. The remaining teams are all top-level teams and they are also very similar in terms of performance and form. However, there are many differences between them when it comes to tactics, key players, and plans.

In this tactical analysis, we will explore some of the key differences between Bayern Munich and Chelsea while we look mainly at their attacking systems and player choices to provide a preview for this huge women’s football game and see how Chelsea can head back to England with a fundamental first-leg advantage.

We will begin this analysis with the predicted line-ups and formations:

For Bayern Munich, the team has recently been using a 4-2-3-1 formation quite regularly, relying on Laura Benkarth as the goalkeeper, Hanna Glas, Carina Wenninger, Marina Hegering and Amanda Ilestedt in defence, and two central midfielders, usually Sarah Zadrazil and Lina Magull, to help in the build-up while at the same time prevent opponents from reaching the box. In front of them, Jens Scheuer relies on Linda Dallmann as an advanced playmaker, Carolin Simon and Lineth Beerensteyn as the wingers with Lea Schüller as the striker. 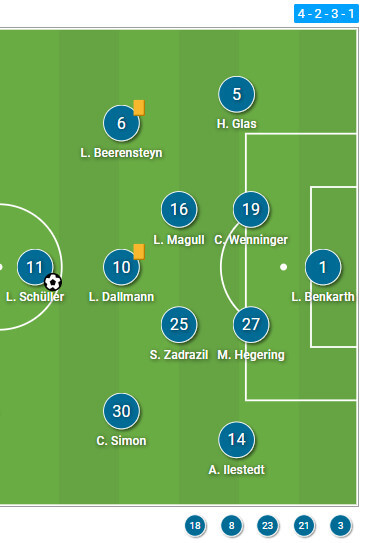 For Chelsea however, Emma Hayes has been using a plethora of formations in the last period, alternating between the 4-2-3-1, the 4-3-1-2 and the 4-4-2. These alternations were made in an attempt to find the most suitable formation that allows the team to get the best out of their talented players. More importantly, having a player like Pernille Harder in the team obliged Hayes to make some modifications to the way Chelsea play in order to make her fit in the system while at the same time keeping the other important attacking players in their roles, such as Fran Kirby, Sam Kerr and Erin Cuthbert.

Since Harder’s natural position is as a number 10, playing in the 4-2-3-1 or the 4-3-1-2 allowed Chelsea and Harder to be more efficient in attack especially when also taking into consideration Kerr’s excellent form in the past couple of months.

This leads us to say that Hayes is likely to use one of the 4-2-3-1 or the 4-3-1-2 formations, or potentially both, depending on the circumstances of the match. Chelsea will more likely start this match with the 4-2-3-1 formation if they want to attack and press Bayern Munich high, and then, if Chelsea manage to score early and Bayern Munich start advancing more frequently and become more dangerous, Hayes could probably switch to the 4-3-1-2 formation to provide more balance to midfield and prevent Bayern Munich from reaching the final third easily. This would be the best scenario for the Blues.

The probable formation would include Ann-Katrin Berger as the goalkeeper, Jessica Carter at right-back instead of the injured Maren Mjelde, since Carter is a more defensive player than Niamh Charles and can provide more defensive stability when facing a winger like Simon especially when playing away, and Millie Bright at centre-back, while the second centre-back is in doubt since Magdalena Eriksson has been injured lately and did not play against Manchester City, so if she will not recover before the match, Sophie Ingle will probably take her place as she did against Manchester City, with Jonna Andersson at left-back.

The midfield will consist of Melanie Leupolz and Ji So-yun as the central midfielders, with Pernille Harder playing as an advanced playmaker just behind Sam Kerr, the team’s striker, and on the same line with Fran Kirby and Erin Cuthbert who will play as wingers.

Chelsea can be very dangerous in this match if they rely on what they have been building this season especially following their wins against tough teams like Wolfsburg, and knowing that Bayern Munich lost to Wolfsburg lately in the DFB-Pokal semi-final means a lot since Bayern Munich’s defence looked vulnerable in that match. This defensive problem should be exploited by Chelsea because when Bayern Munich faced teams that play attacking football, they suffered a lot.

It is also worth mentioning that Bayern Munich got beaten by Hoffenheim where they gave up a 2-0 lead. This also backs up the idea of Bayern Munich’s defensive issues since they have been conceding many goals recently even when they win, like in their last match against Potsdam as well.

Therefore, if Chelsea use their high pressing system effectively and rely on the quick passing combinations between Kerr, Kirby, Harder and Cuthbert, they should be able to reach Bayern Munich’s penalty area several times and have scoring opportunities.

As you can see below, Chelsea’s attacking players have been usually attentive when out of possession by letting Kerr press high and disturb the two centre-backs while Cuthbert, Harder and Kirby stand in the same line and mark the full-backs as well as central midfielders. This is to force the opposition defenders into crossing the ball instead of building out from the back. If they insist on building up from the back, Chelsea are usually able to intercept passes and create counter-attacks thanks to their effective pressing. 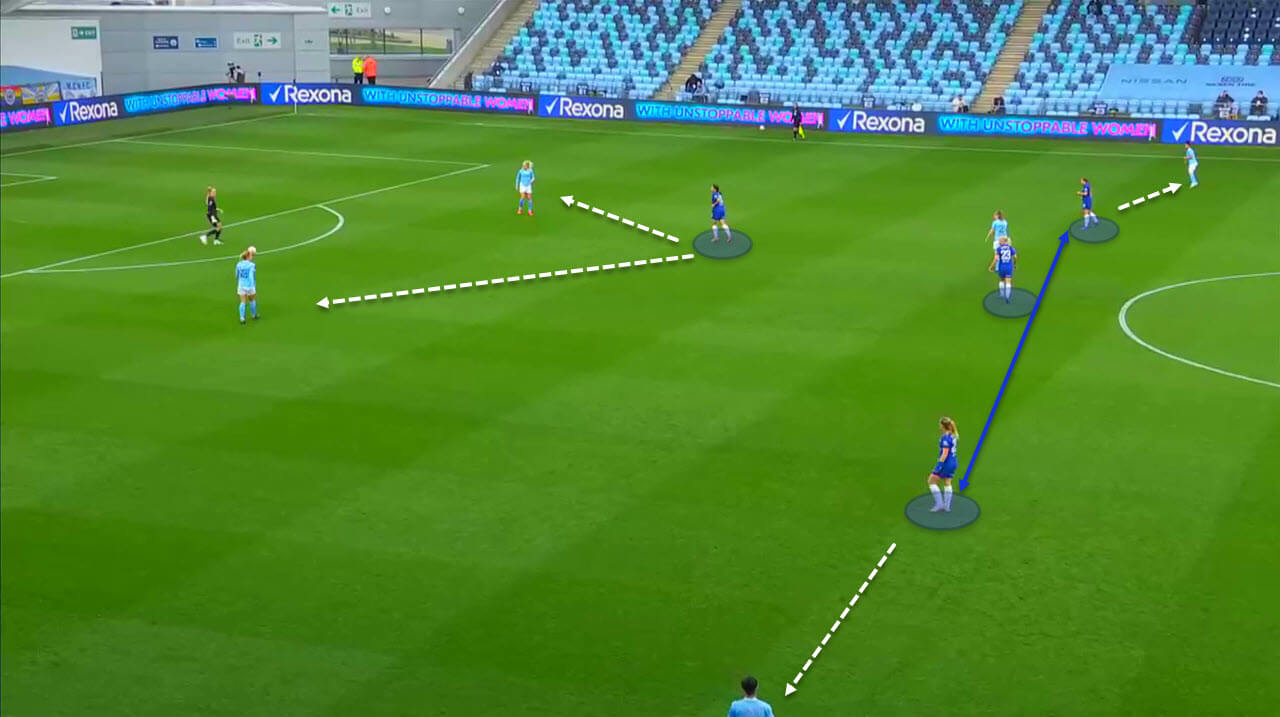 We saw this against Manchester City and also against Wolfsburg in the UWCL quarter-finals, a match in which Chelsea were excellent in attack as they exploited their opponent’s weaknesses in the final third. In this regard, Harder plays a big role since she often starts the action from midfield, and then when the ball reaches Kirby or Cuthbert she advances to join Kerr inside the box as a second striker.

This creates problems for opposing defenders since they often can’t predict her next move, and this element of surprise helps Chelsea a lot even when Harder does not finish the action. In other words, Harder’s movement without the ball inside the box and in the final third, in general, allows other Chelsea players to have more space to shoot and be dangerous, and here we are talking mainly about Kerr, since Harder helps her by getting defenders away from her.

At the same time, Harder often positions herself in key spots in order to provide passing options, as she did in this example when she saw Kirby passing to Kerr, and by moving towards that blue circle, she escaped from Ingrid Syrstad Engen’s marking and provided a passing option for Kerr who will receive the ball. 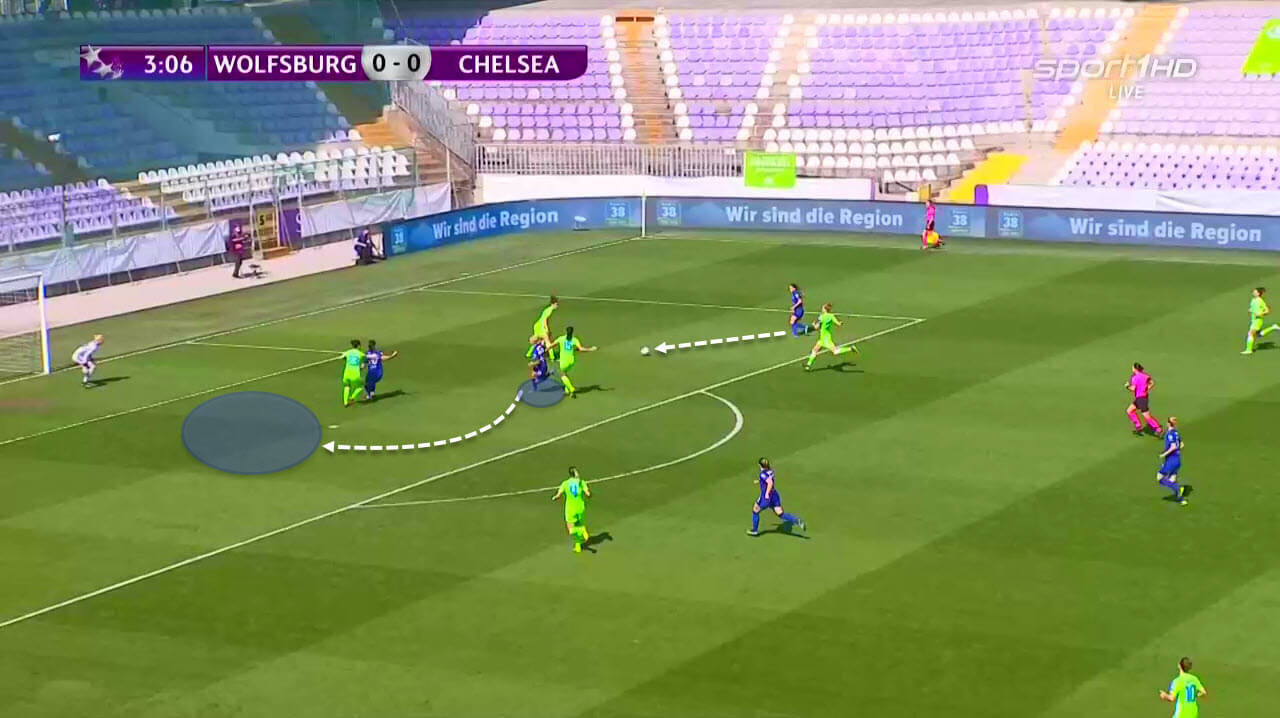 Moreover, relying on Kirby and Cuthbert’s movement, crossing and triangular combinations with Harder can be very effective to reach Bayern Munich’s goal since these players are quick and can help overcome Bayern’s defensive block. However, they will need to keep the balance to not risk conceding counter-attacks as they did against Wolfsburg. In the first leg of that quarter-final, Chelsea left too much space on their left flank for their opponents to advance and cross, and that did create dangerous opportunities for the German side, which could have potentially been exploited by a better team.

Playing with a high defensive block like this can be dangerous at times and Chelsea should be aware of this in order to not leave too much free space behind their defensive line, which is what happened when both Andersson and Eriksson defended high and were not able to keep up with their opponent when she advanced down the flank, while at the same time no one was able to cover them since Bright and Charles were marking their opponents inside the box. 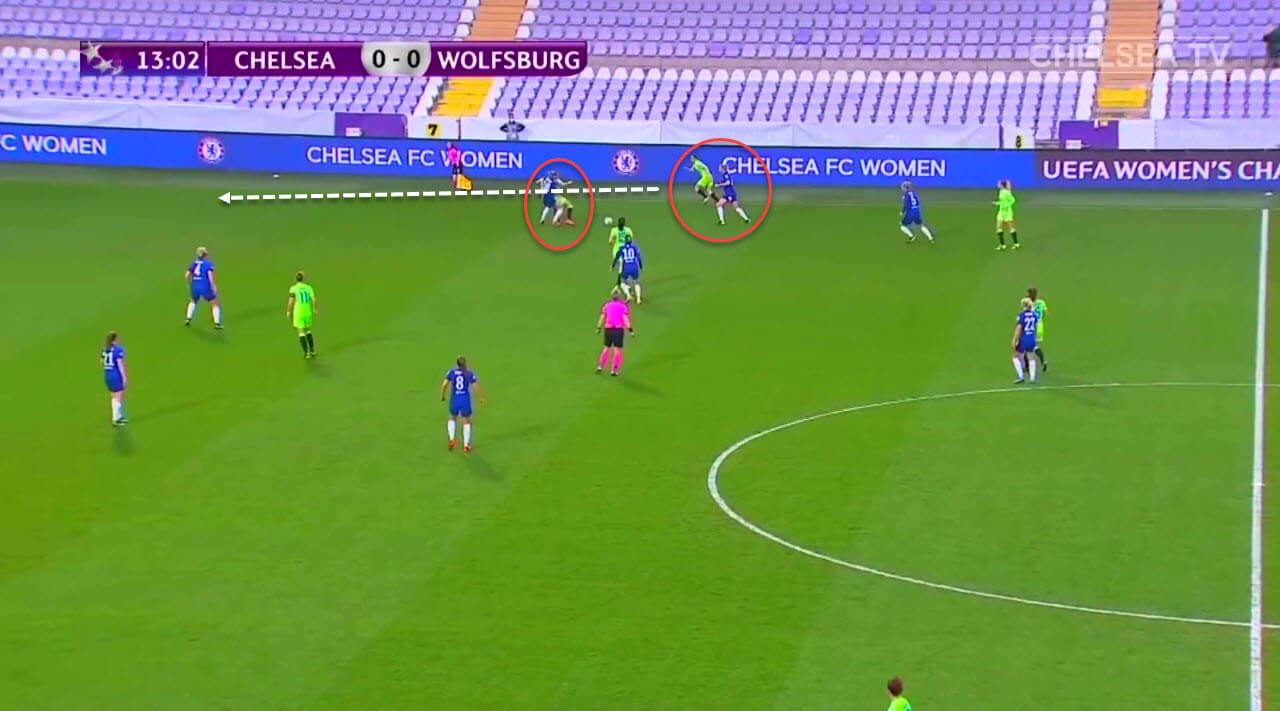 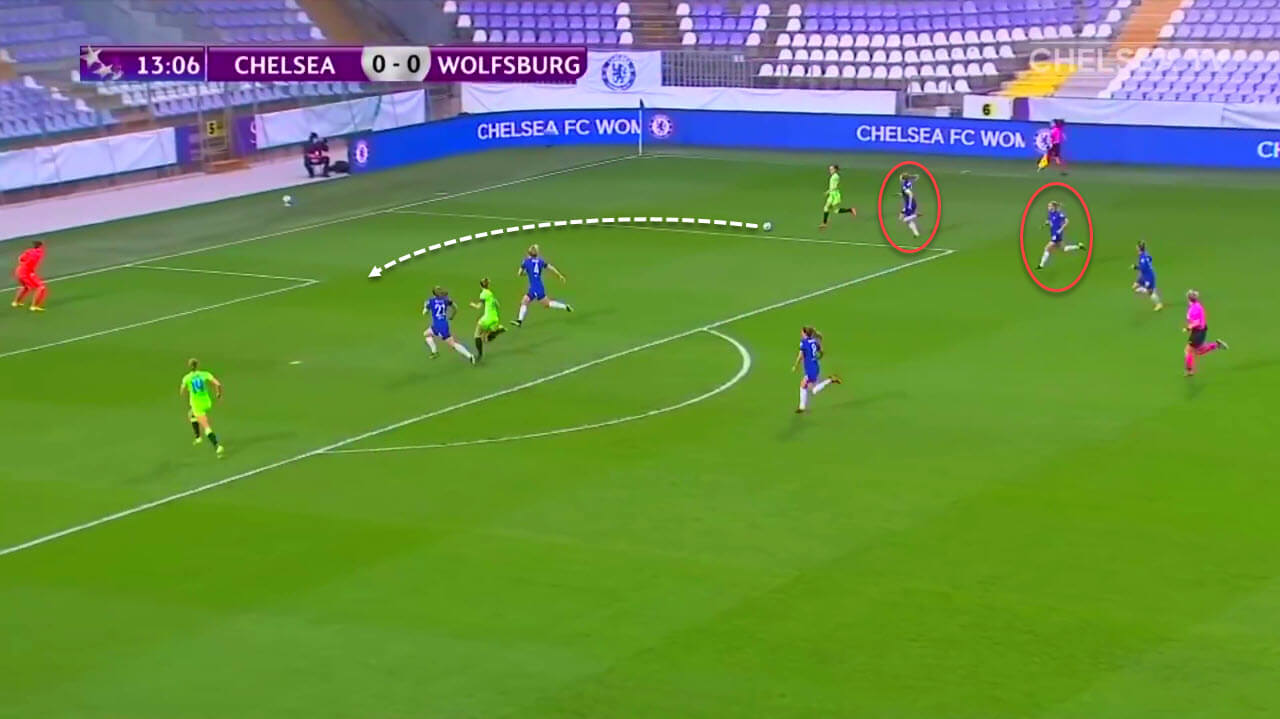 It is true that Bayern Munich are not having their best run of form at the moment, yet they remain a big team with talented players and the potential to pull of great results. Their attacking phase relies heavily on their striker Lea Schüller, since she is excellent at competing for the ball in the air and at taking shots. Her teammates help her a lot in order to give her suitable scoring chances, this includes crosses from the wings, Dallmann’s key passes, and more importantly, Magull’s attacking support.

The latter often plays an important role inside the box when she advances near Schüller to distract her markers and provide an additional passing option for her teammates. Such movements create a lot of danger for Bayern’s opponents as you can see in the following pictures. In the second image, you can see how Simon was crossing to Schüller and Magull attracted a defender by being inside the box waiting for the cross, and this allowed Schüller to be completely unmarked and have the space to score. Further, Dallmann’s creative touch is unique and this allows Bayern Munich’s attacking players to receive key passes regularly – they only need to position themselves well and move intelligently without the ball to receive Dallmann’s through passes. This can be quite effective against a solid team like Chelsea who will not give a lot of space for Bayern. Therefore, key passes like this back-heeled assist to Schüller can be extremely useful for Bayern. 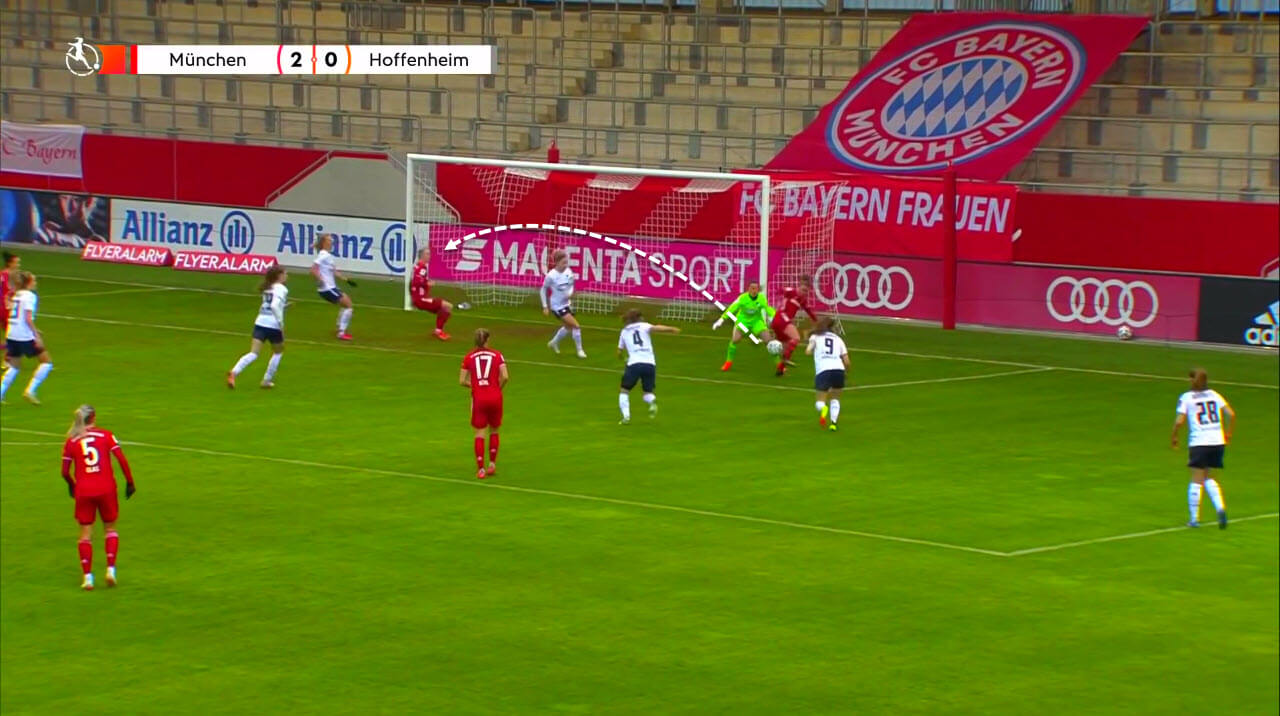 This match promises to be one of the best games of the season since both teams are doing extremely well in their respective leagues. The game will not be easy for either team even though Chelsea will have a slight advantage given their good run of form and their excellent attacking performances. However, Bayern Munich will also aim to score at home and especially not concede, and this should mean that they have a cautious approach due to the potential importance of away goals in this tie.