U19 European Championship 2022: How England’s youngsters reclaimed their title against Israel – tactical analysis

Friday saw England once again crowned winners of the Under-19 European Championship after they came from behind to defeat Israel 3-1 after extra time in the Anton Malatinsky Stadium, in Trnava.

It is the second time in five years England have won the competition, as they beat Portugal 2-1 in 2017 with a team which featured the likes of Chelsea stars Mason Mount and Reece James, Arsenal goalkeeper Aaron Ramsdale, and even the current Chilean international Ben Brereton Díaz of Blackburn Rovers.

England came into the final holding a richer history within the tournament. Competing in their 11th championship in this age group and their fourth final in total.  Before their victory in 2017, they finished runners to France and Ukraine in 2005 and 2009.

Reaching the final was a completely new entity for Israel who, on only their second participation in the tournament, are playing in the final for the first time.

Playing each other wasn’t a new experience for either team as this was the second time they faced Ian Foster’s team in this tournament, as they faced off in the group stage of the competition. England edged that match 1-0, with Liam Delap getting the only goal. 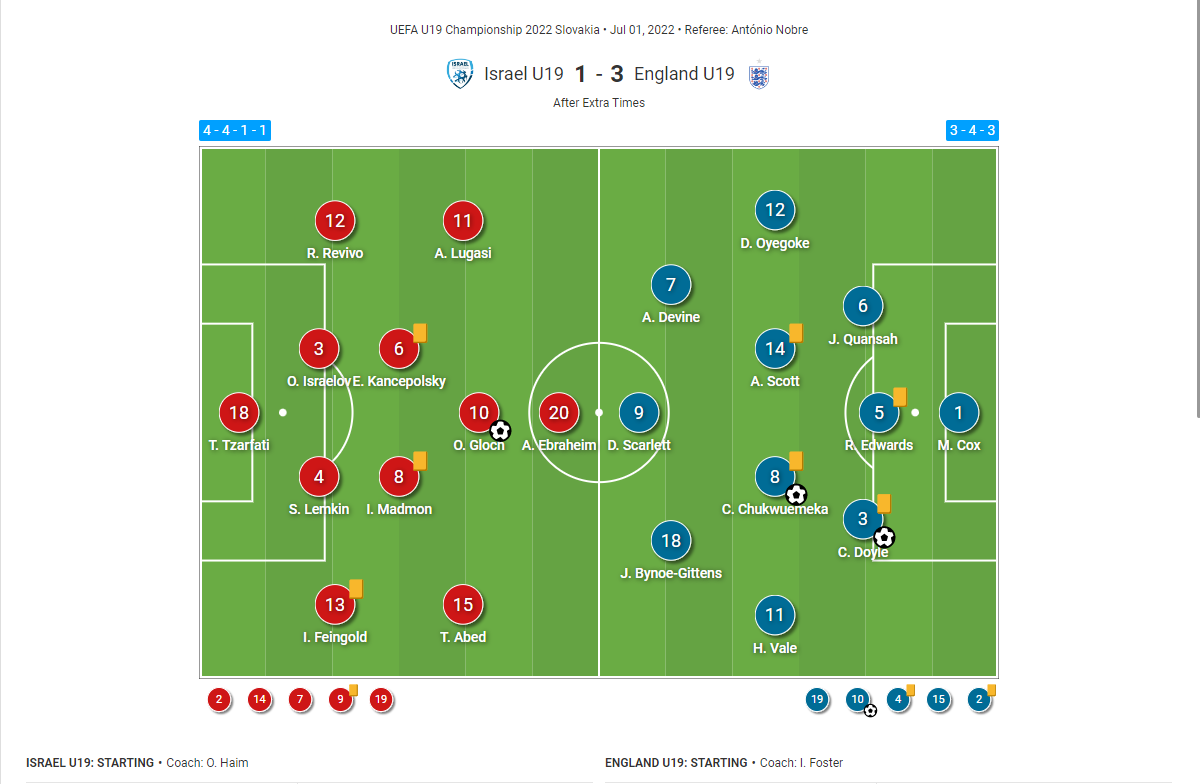 England approached the game with their accustomed variant of the 3-4-3 formation. This has been Ian Watson favoured formation throughout this tournament due to its flexibility.

The 3-4-3 can switch between a 3-4-2-1 by asking your wide players to play inside, and the wingbacks allow the approach to be either a defensive formation or an attacking formation during the transition as they can help overload the pitch at both ends. As you can see in the feature below. England’s shape has varied between a 3-4-3, a 3-4-2-1, and a 5-4-1. Which is the shape the team holds when they are defending in their own half.

Ian Watson made three changes from the team that faced Italy in the semi-final.  Daniel Oyegoke replaced Brooke Norton-Chuffy as the wing-back on the right-hand side, Alex Scott replaced Tim Iroegbunam in central midfield, and Jamie Byone-Gittens replaced Ramsey as the wide forward on the left-hand side.

Israel coach Ofir Haim didn’t surprise anyone as he kept the same starting line-up from the team that shocked France in the semi-final. Although Haim had the option to mix things up in the attacking third with Dor David Turgeman and Ilay Tomer. It was Oscar Gloukh that featured as the number 10 behind Ahmad Ebraheim who led the line once again.

Israel started the game in a 4-2-3-1 formation, but as shown in every match throughout this tournament, when they have possession, they can switch fluidly between a 4-2-3-1, a 4-4-1-1 and in this game a 4-1-4-1 without allowing their defensive shape and pressing strategy to become disjointed

In possession, Ofir Haim utilises the full benefits of the 4-2-3-1 formation. Israel plays with a number 10 and supports the creative freedom that the position needs, the wide players provide the lone forward with plenty of support centrally and the double pivot allows them to play out through the defence effectively.

In the first half, Israel were the better team. They dictated the tempo when they were holding possession and controlled the space during England’s possession.

As suspected, they kept to their usual defensive tactics, but their shape wasn’t just a solid, narrow and compact 4-4-1-1 shape. It appeared they favoured a 4-1-4-1 shape or a 4-2-3-1 defensive shape. Dependent on where England carried the ball.

You can see in the image below how Israel are holding a 4-1-4-1 defensive block and how they have blocked the passing lane down England’s left channel off. At this point, Ahmad Ebraheim Israel’s centre forward splits the pitch forcing Carney Chukwuemeka to play back to his centre backs 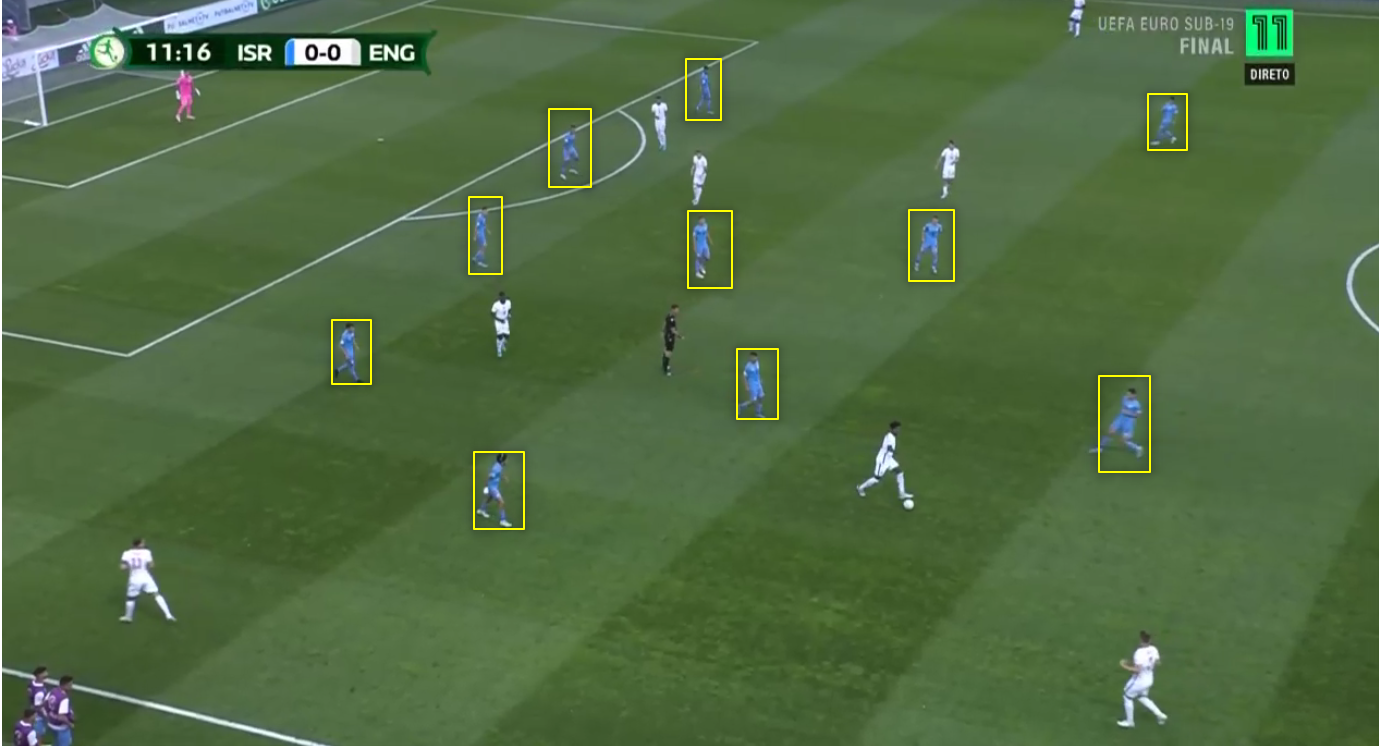 The defensive shape and block tended to switch situationally, depending on how England was attacking. The difference from above is that England are now playing forwards and have options to progress the play. When this happens, the team defending are left vulnerable to being pulled from their defensive shape.

In this instance, Israel’s defensive shape becomes a 4-2-3-1. This gives the team extra protection centrally because once the ball is progressed to the left-hand side there is always a chance that bigger spaces are created as the team shuffles across. 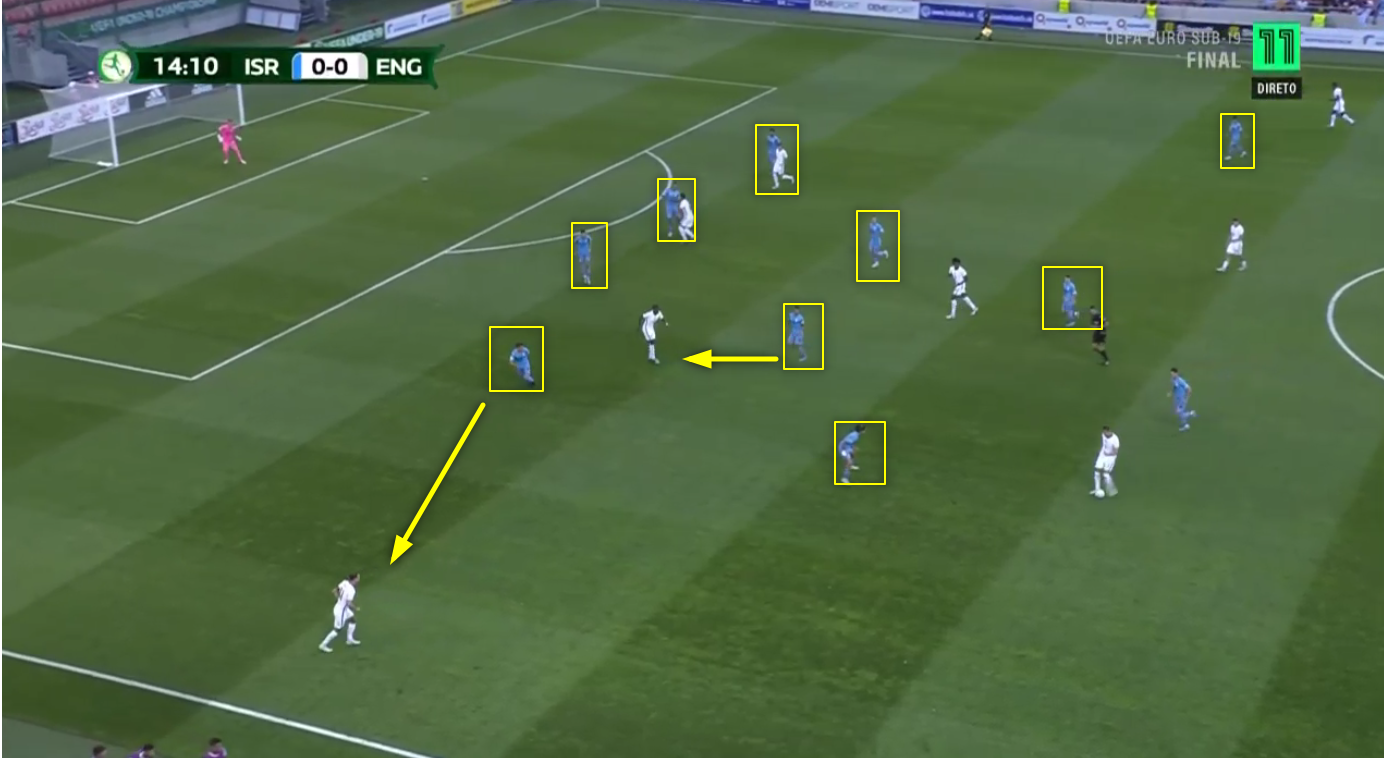 The reason for Ofir Haim and Israel keeping a compact and narrow shape was to stop England from playing through the centre and force them to play into the wide areas. As England played a 3-4-2-1 formation, their wingbacks are the only players covering each wide channel.

Israel’s tactics were then to press the wide areas more aggressively and look to win the ball back. This was done by overloading the wide areas 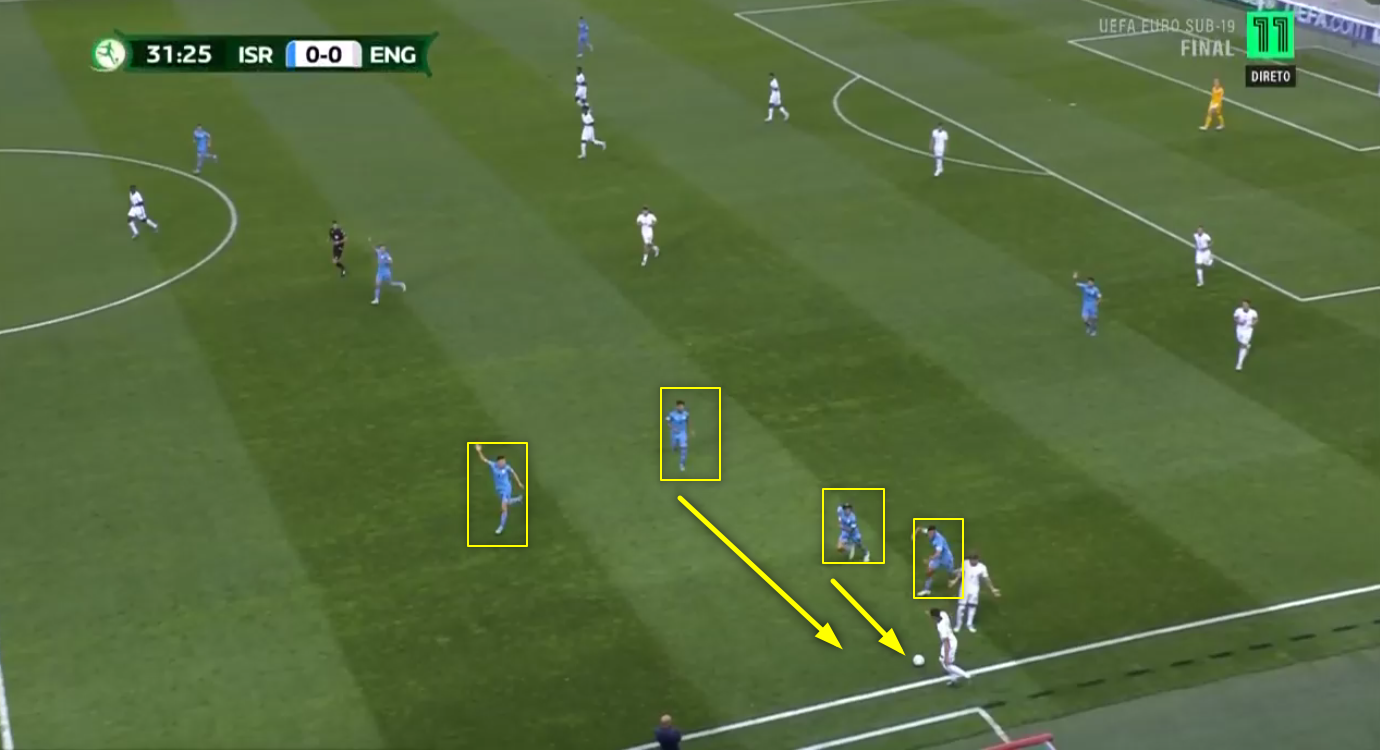 When a wingback is closed down quickly in this scenario it would take a player from another position to provide support. If that player is from the midfield and or even the outside centre back on that side, it will provide the defending team space to attack into. In this case, Israel were forcing England’s play out wide to catch them out of position.

Israel were having a lot of success drawing England towards the ball and stopping them from having any kind of effective defensive structure high up the pitch. Israel always set up to play out from the goalkeeper, however, there were times throughout the first half when the keepers wouldn’t play through the centre backs, he would play the ball in behind the England midfield as they were getting caught pushing up to stop Israel’s double-pivot taking control of build-up

This is how England looked to stop Israel from building up. They dropped Alfie Devine into the centre and pushed Carney Chukwuemeka to form a box shape block in the centre.

This encouraged Israel to go long from the goal kick. However, when successful, Israel was taking advantage of this as it opened up space in England’s defensive shape. As shown in the image below. 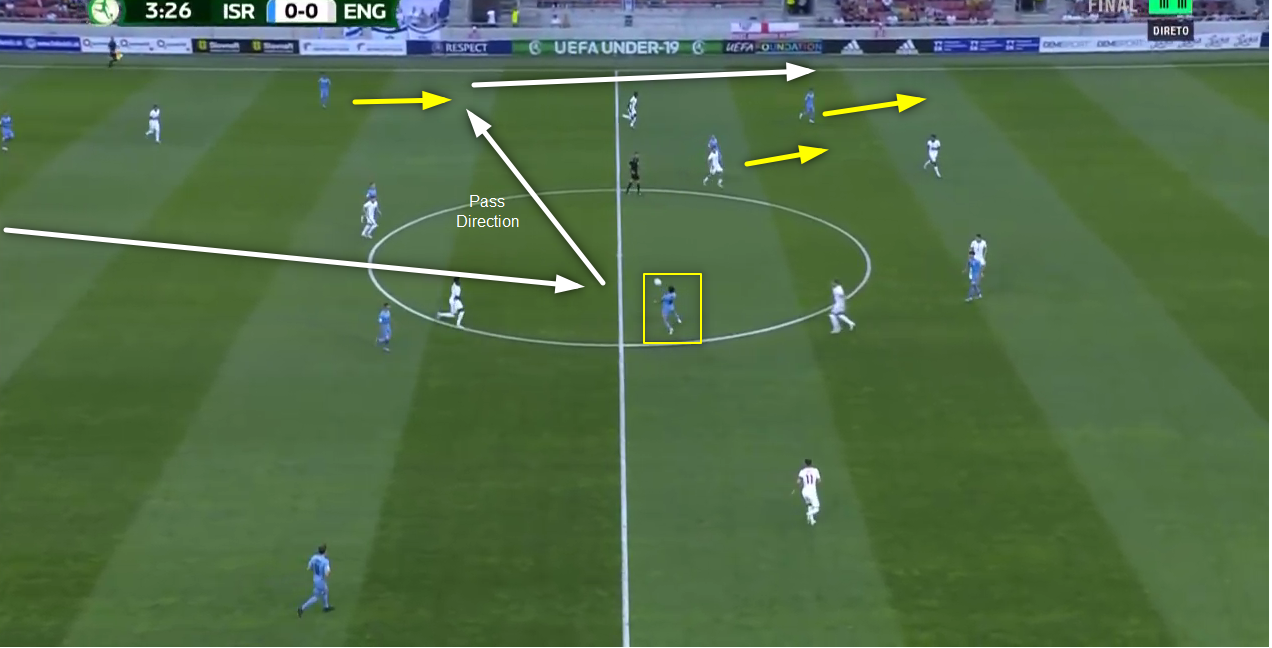 Due to Israel’s success through their build-up, they were able to keep England defending in a low block for many periods in the first half. This allowed Ofir Haim’s men to dictate the play. Israel were attacking in a 2-2-6 formation. The full-backs were playing high up and providing width whilst the wingers and the number 10 were pushing inside and joining the centre forward, creating a six-player forward line.

This shape gave Israel full coverage in all zones across the pitch and it countered England’s 5-4-1 defensive shape as it enabled Israel have a 6v5 numerical advantage in England’s defensive third. 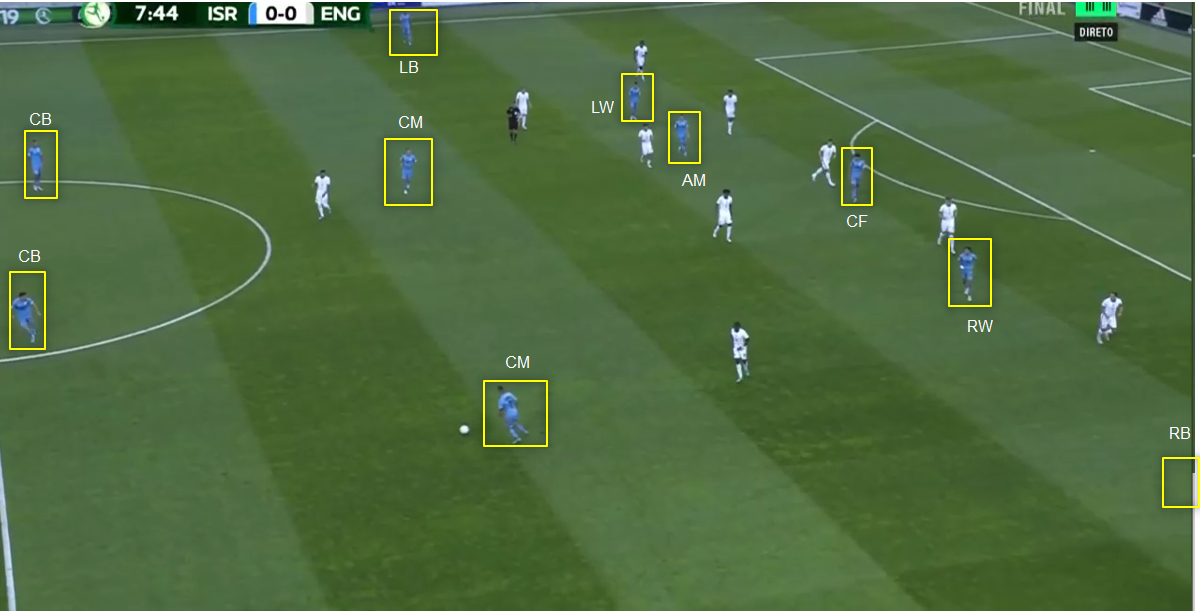 England’s defensive plan was clear. If Israel progressed with the ball and held possession in the England half, then Ian Watson’s men looked to defend in numbers. They set up in a 5-4-1 formation to protect their defensive third.

They sat narrow and compact and didn’t put pressure on the ball. 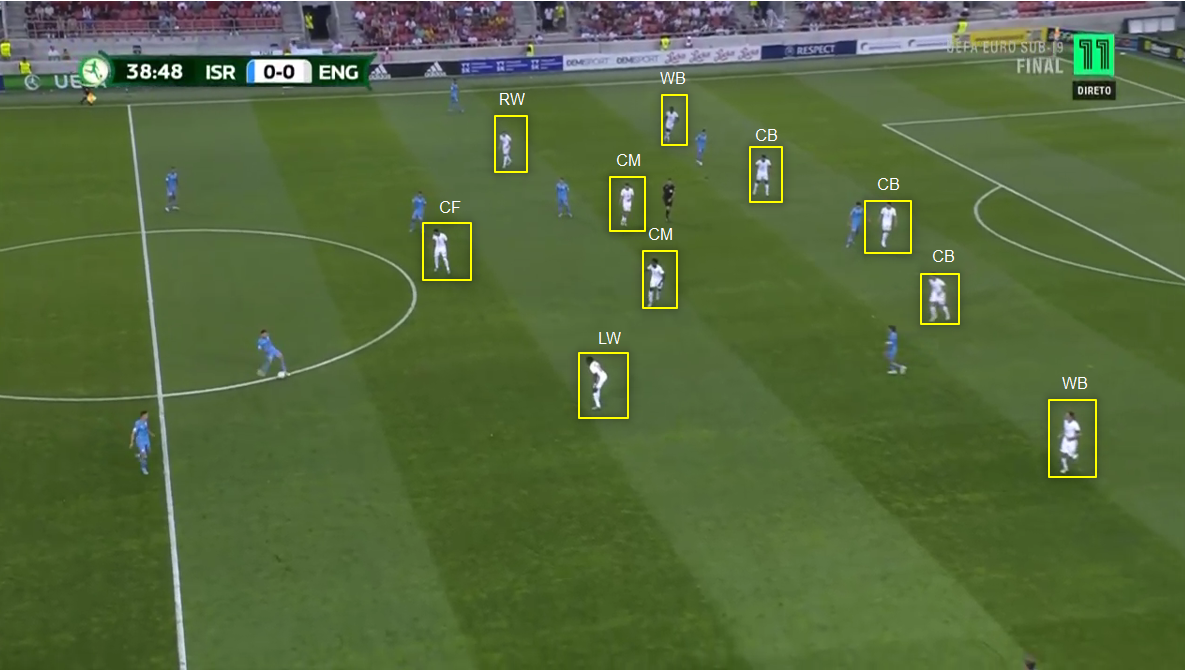 As we shown earlier during the analysis of Israel’z build-up. England’s defensive structure higher up the pitch followed the same principle. Protect the pitch centrally with a solid shape, with only one player putting any pressure on the ball carrier. It didn’t work, Israel was controlling the play in both halves of the pitch and England struggled to win the ball back.

In the second half England came out with a lot more purpose during their defensive phase. They pressed more aggressively high up the pitch and changed their high block structure from a narrow 1-2-2 shape to a 3-2 shape.

It allowed them to maintain pressure on the ball right across the pitch by giving up space in the centre of the pitch and forced Israel to play at a quicker pace during possession. When this happened, it created scenarios where they forced to play the ball into areas were England could create defensive overloads.

Ian Watson will be disappointed with his players when they attack. England didn’t attack with any kind of fluidity or set patterns.The 3-4-3/3-4-2-1 formation is a system that aims to win the game through transition, you can transition to attack in a 3-2-5 shape, and you can transition to defence in a 5-4-1 shape. Either way, you can support the play at both ends and catch your opponent off guard defensively. Like below. 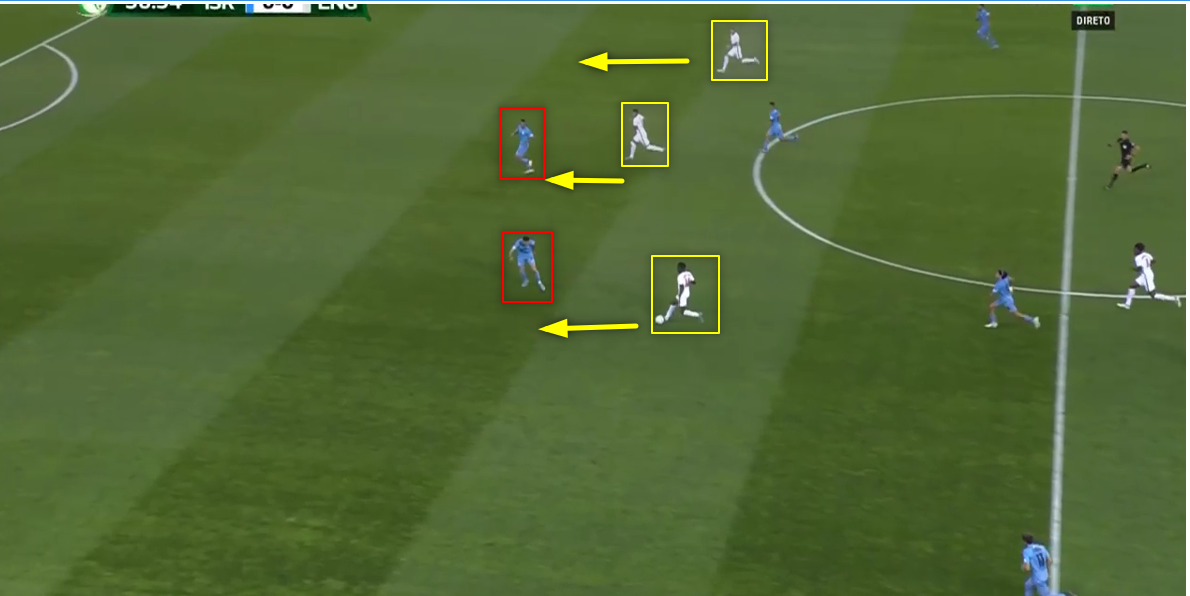 The more the game progressed, England enjoyed moments of good play where you could see Ian Watson’s tactics and game plan which he wanted the team to follow.

The purpose of why England set up in 3-4-2-1 and not a 3-4-3 is so Jamie Byone-Gittens and Alfie Devine can control the half spaces, play in between the lines, and offer support out wide. It gives them freedom to roam around the pitch. When this happens it can drag the full backs inside, as it does to Israel’s in the image below.

You can how much space has opened out wide for England’s wingbacks to attack. 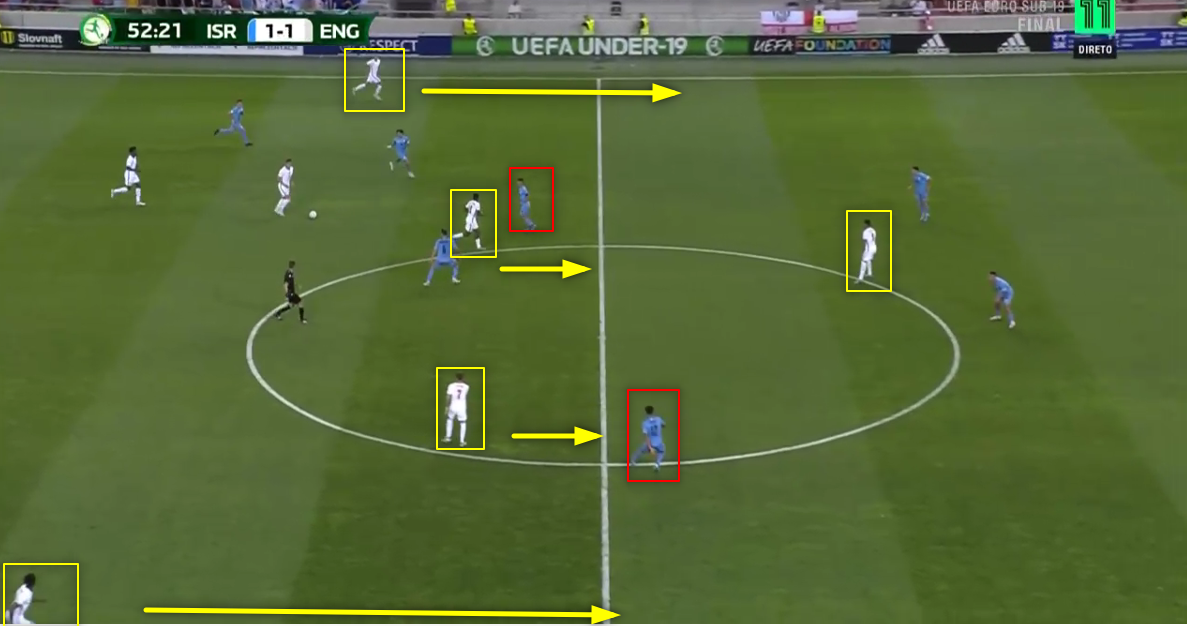 As the went deep into the second half and into extra time. England started to have more success with their vertical play. You could see more space becoming available as both teams were looking to transition quicker and quicker.

England were looking to attack and take advantage of this through the wide channels. Carney Chukwuemeka started to drop more and get involved in the build-up. This aided England’s verticality as Chukwuemekas progressive passing pulled Israel from their defensive shape as they looked to close him down.

You can how England are creating a 4v3 overload out wide. Chukwuemeka drops to take the ball from Callum Doyle and plays a vertical pass into Byone-Gittens. Once again, the position of Byone-Gittens as he drops in behind the midfield and pulls the full back inside creates space down the left channel.

This analysis has shown the key tactical aspects and how they were implemented in such a closely fought contest between England and Israel.