Ernesto Valverde 2022/23: What the Athletic Club fans can expect to see the 3rd time around in Bilbao – tactical analysis

Ernesto Valverde is likely to be appointed as manager of Athletic Club Bilbao for the third time.  Jon Uriarte won the Basque club’s presidential elections on Friday and as promised is looking to re-appoint their former player and manager on a rumoured two-year contract.

Valverde began his career as a manager of Bilbao’s youth teams, working his way through the B team and then becoming the Head Coach for the first time in 2003. The former Barcelona manager will be best remembered for his second spell in charge of the club when he replaced Marcelo Bielsa in 2013.

During this spell they qualified for the Champions League, reaching the group stages of the competition. They reached the 2015 Copa del Rey Final losing to Barcelona, 3–1 and they won their first trophy in thirty-one years after a 5–1 aggregate defeat of Barcelona for the Supercopa de España

The second half of the season has been an unsettled time for Bilbao. With Marcelino Garcia Toral’s contract expiring, and him then announcing there was a 50% chance that he wouldn’t be here next season, a period of uncertainty had started to develop amongst the club fanbase. So, the return of the Valverde has been a welcome boost and will bring some excitement back amongst the supporters.

This article will be a tactical analysis of Ernesto Valverde’s time in charge at San Mamés. We will provide an in-depth analysis of the tactics used in the defensive and attacking phases of play and show Bilbao’s fans what they are likely to see the third time around.

Throughout his second spell in charge at the club, Ernesto Valverde preferred a traditional 4-2-3-1 formation.  He has been known to show flexibility within his formation choices and will often choose a formation to suit the players he has at his disposal.

When he took over from Marcel Bielsa in 2013, he immediately set out to make the team more solid defensively and made the 4-2-3-1 his go-to tactic. Each season he was in charge the rate at which he deployed this system increased.

You can see from the graphs above that in his final two seasons at the club he used the 4-2-3-1 formation in 77% and 83% of the games they played.

The 4-2-3-1 suits Valverde’s adaptability as it’s ideal for adapting to different game situations. The two holding midfielders provide the team with balance in each of the four phases of play. Depending on the manager’s preference, you can give a good variance between each player stylistically. For example, you could play two defensive-minded players to give extra coverage to your attackers or play a deep playmaker and ball winner. Managers can adapt to the players available.

The 4-2-3-1 provides good attacking and defensive coverage in the wide areas as you have two players in each wide channel and depending on what tactics the managers use when in possession of the ball it can make a team unpredictable in the attacking third as the centre-forward will get support from two wingers and number 10.

Ernesto Valverde implemented the 4-2-3-1 formation because it suited how he wanted the team to play. They didn’t play with a particular style when they held the ball, as they liked to mix up their play. Sometimes they looked to be more direct and sometimes they would offer more patience and build through the thirds.

This approach was perfect for the players who played for Bilbao during this period, as they had players available to be flexible in their approach. Upfront they had Aritz Aduriz who played like a target man and provided a focal point for the team in the attacking third. He would provide the option for Valverde’s direct approach with the rest of the attackers being able to play off him. Players such as Iker Muniain and Beñat Etxebarria would like to get on the ball and disrupt the other teams with key passes and progressive play and then Inaki Williams who emerged on the scene during this period and was crucial for counterattacks. Attacking space in behind and carrying the ball forward in 1v1 situations.

When Valverde took the reins at San Mamés he made the team more productive when holding possession of the ball. In his first season, they averaged less possession but averaged more shots on goal per 90 minutes than the season before under Marcelo Bielsa. The aim was for the team to be less retentive in possession and more purposeful, their attacking play was more varied. Valverde’s tactics didn’t focus their play down a particular corridor on the pitch or a specific zone. Although the team look to utilise the wide areas and penetrate the opposition more with crosses than they did under Bielsa. The in-match situation and opponents would help dictate if they attacked through the wide areas or the middle of the pitch.

Between the 2013-14 – 2016/17 seasons the team finished in the top places in La Liga for most crosses per game, most long passes per game and finished in the top half each season for most short passes per game so this shows how they mixed their play during possession. In each of Bilbao’s four-season under Valverde, they averaged 53%, 50.8% 49.3%, and 51.10% possession. The chart below shows how they compared to the rest of the league during his last season in 2016/2017. 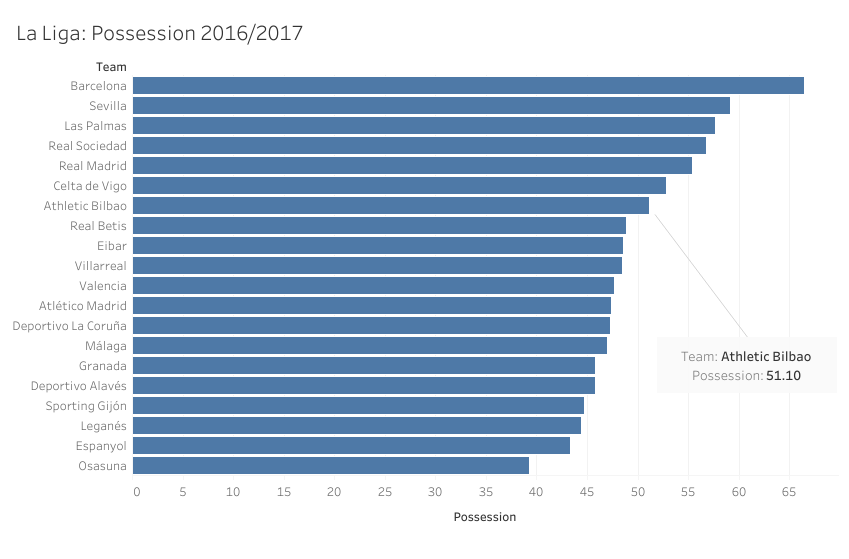 In their build-up stage, Bilbao changes their shape to either a 3-4-1-2 or sometimes a 3-2-3-2. Depending on the situation the players will usually take one of two positions. The image below shows only one full-back pushing high up the pitch to provide width as the winger of him has pushed up to join the centre forward in the attacking line. The player in possession of the ball is the right full-back who comes inside and sits narrow, joining the centre backs to make a back three. The right-winger in front will occupy the right channel and stay as close to the touchline as possible. This stretches the opposition and provides Valverde’s team more coverage across the pitch. 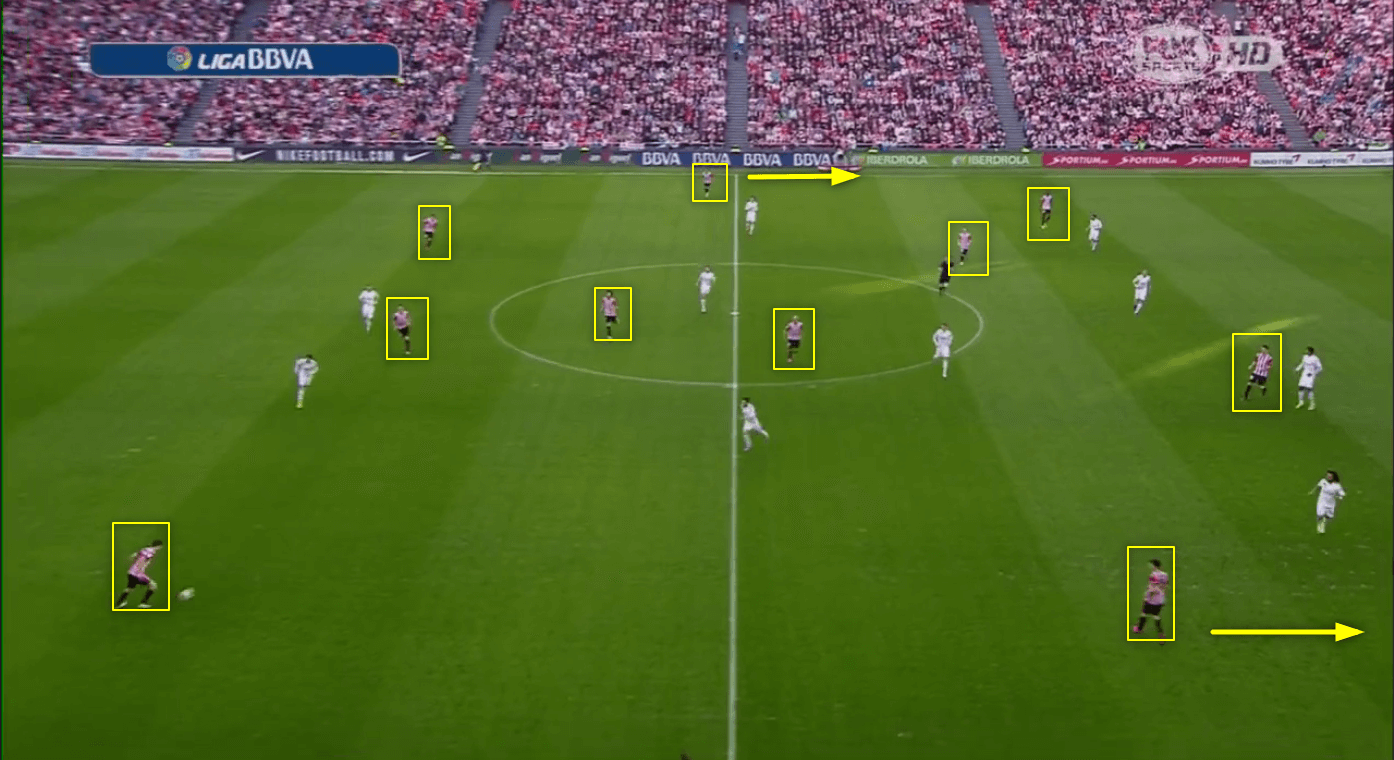 The other build-up routine would include the full-backs on both sides pushing higher up the pitch and one of the two holding midfielders dropping between the centre-backs to make the back three. The set-up between the wingers would remain the same with one staying wide and the other coming inside. The full-back whose winger in front of him stays wide usually sits narrow to support the play centrally.

It was usually when they were playing from the defensive third through to the middle third that Bilbao would look to keep hold of the ball. The reason for this was to draw the opposition and entice them to press. This would leave space behind to attack. You can see here as the play enters the middle third, how Bilbao have pulled Real Madrid out of their defensive shape and over to one side of the pitch. Look at the space across Madrid’s half of the pitch. This is when Valverde’s Bilbao would look to play direct. 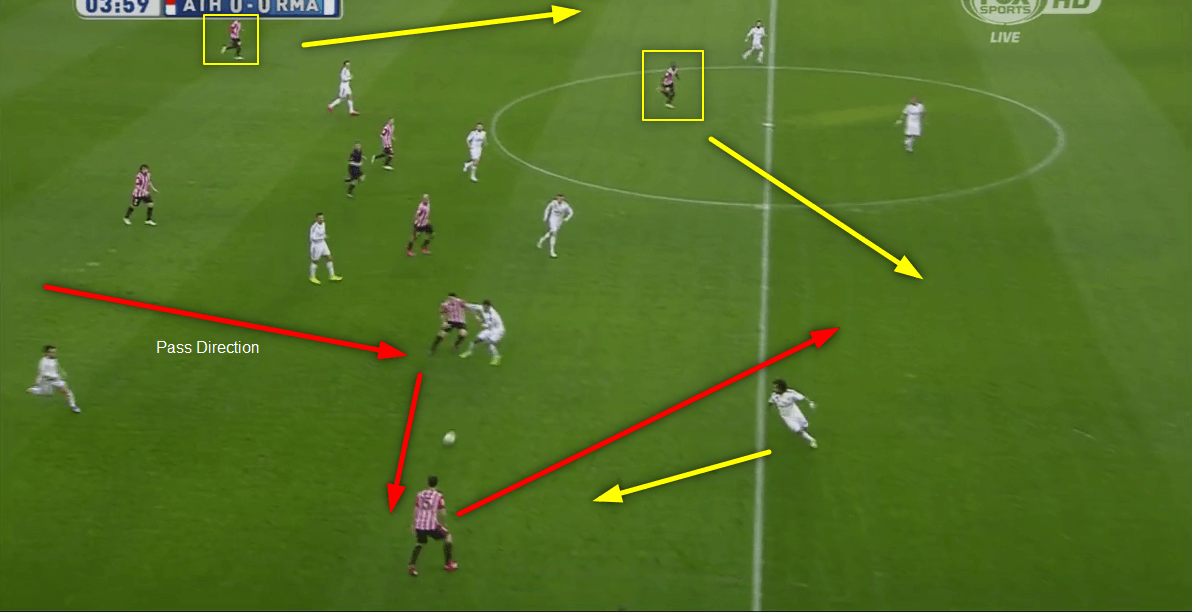 Looking to go direct and attack space in the attacking third suited the player’s strengths. Iker Muniain, Inaki Williams, and Raul Garcia were prominent members of the attacking quartet in the 4-2-3-1. All three were able to anticipate and attack space to disrupt the other team’s defence. Iker Muniain and Inaki Williams were quick and dangerous when dribbling 1v1. Then centre-backs like Yeray and Laporte and playmakers l Benat had a good range of passing to be able to support the movement of these players.

This example against Barcelona shows how the team approach the attacking third directly. Bilboa have a player in every zone across the pitch across Barcelona’s defensive third. The full-backs are occupying the wide channels, the wingers are occupying each of the half-spaces and the attacking midfielder is making a run behind the centre-forward, which creates space between Barcelona centre-backs. 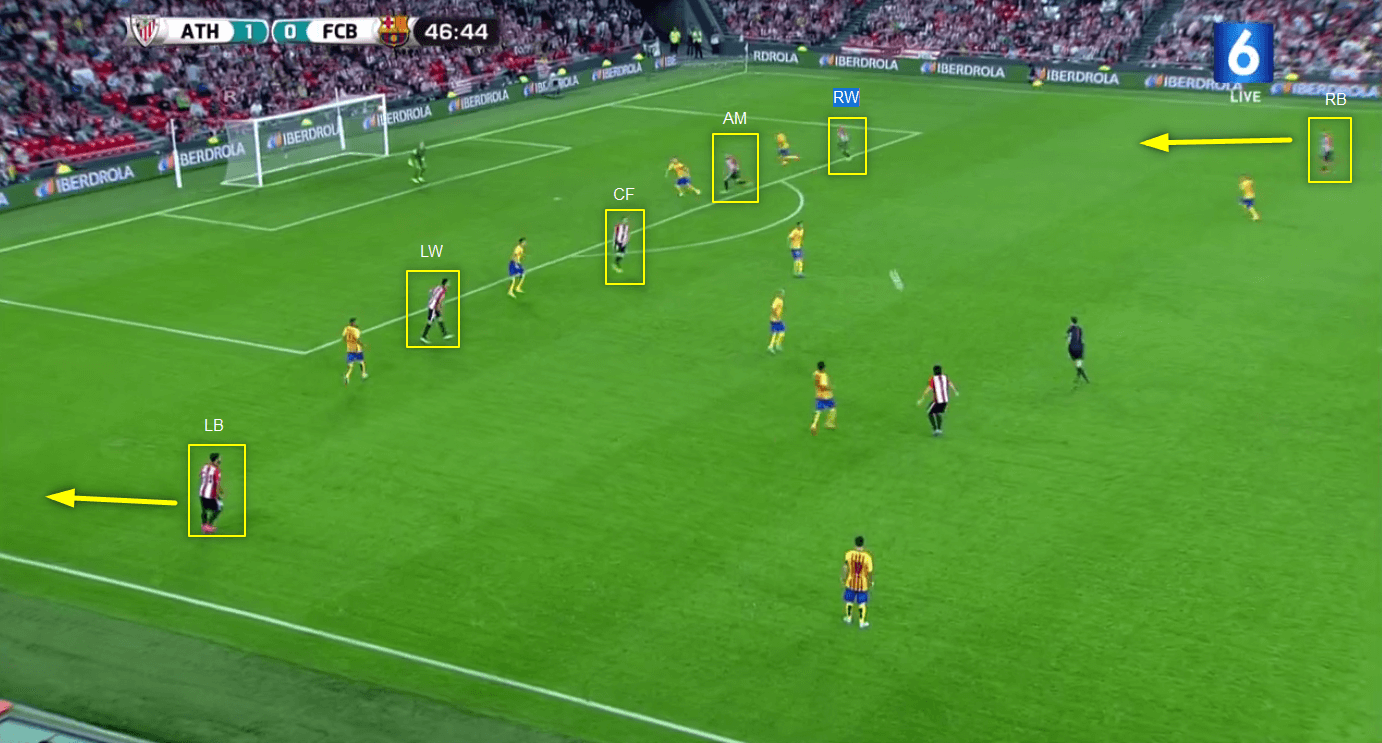 As much as Valverde enjoyed and wanted Bilbao to attack, he didn’t prioritise attacking over defending. Defending still played a big part in the tactics he deployed during this time. The team were defensively well structured out of possession and were difficult to break down. In three out of the four seasons in charge, Bilbao finished in the top three places in La Liga for the number of shots they conceded per game and the number of tackles they completed per game. Los Leones were aggressive and intense out of possession, but organisation was the key. 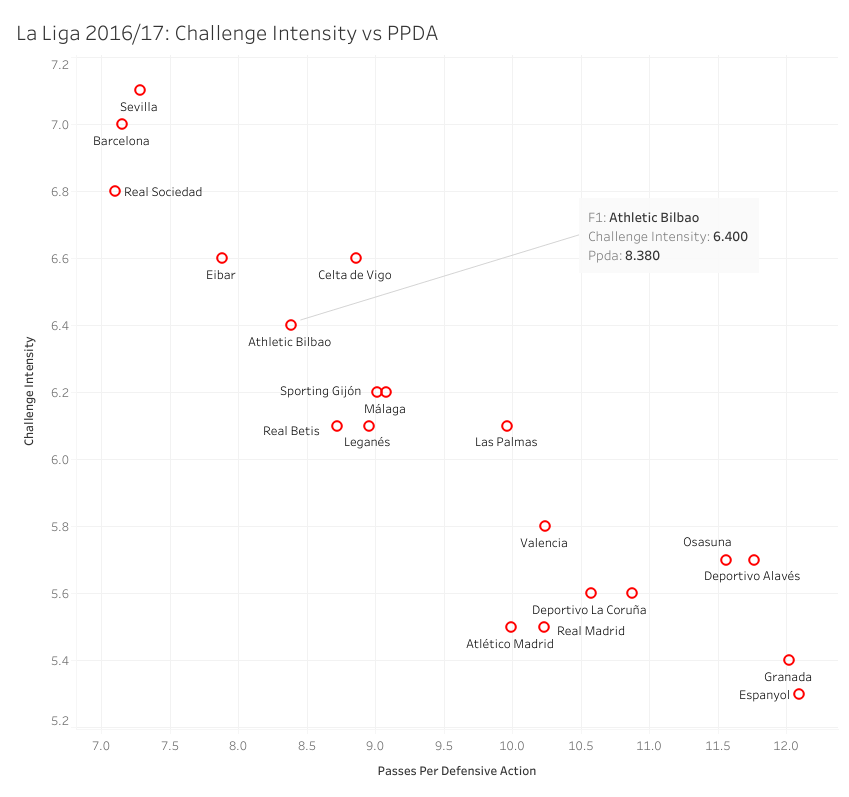 This defensive system proved to be effective as Bilbao conceded 43 goals and ended up being the 5th best defence in the 2016-17 La Liga campaign. The graph below shows how they compared to the rest of the league in Valverde’s last season. Their expected goals against were just under three goals less than the actual number of goals they conceded, this shows good defensive efficiency. They had the fourth best-expected goals against record in the league. 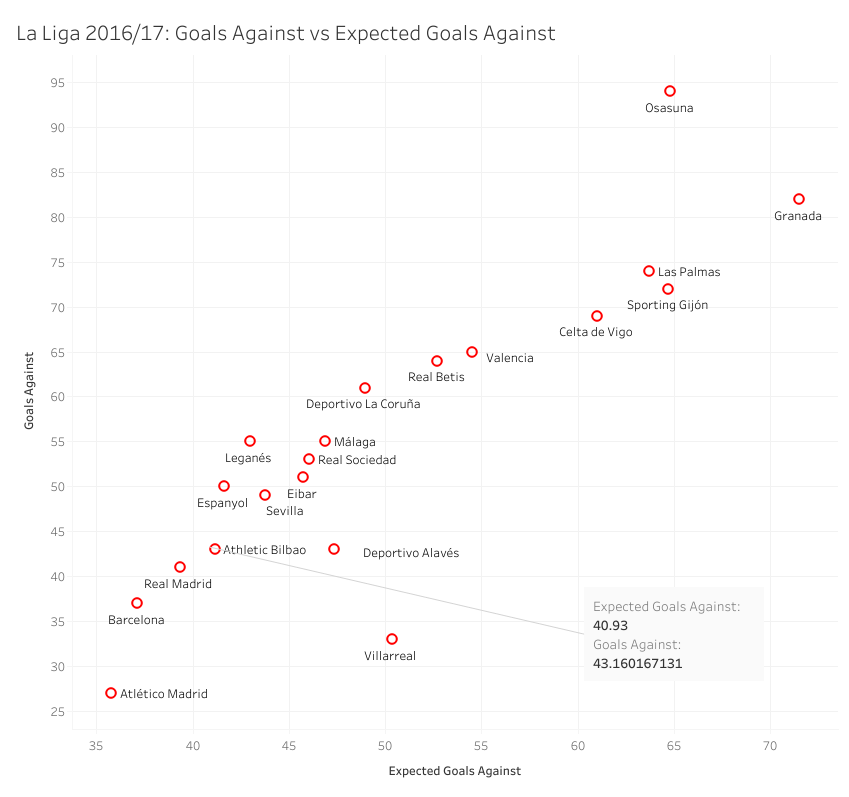 He has an effective defensive system which involves a mix of pressing high and maintaining a compact shape that makes the team difficult to play through. Like many in modern-day football, this is determined by the area in which the opposition keeps the ball or the rea the ball is played to. When an opponent has the ball in their own half, Valverde would look to play a high man-to-man pressing system that ensured the other team can’t play out from defence or at the least played through the areas Bilbao pressed them to.

This type of play forces the opposition into trying to play more quickly and more directly which inevitably gives them more chance of conceding possession.

Their man-to-man pressing system wasn’t as high voltage as Marcelo Bielsa man to man pressing system all over the pitch. Once the opposition start to play or look to play into the middle third of the pitch Bilbao would then look to stop pressing man for man and look to retain a solid 4-4-2 shape.  You can see here in the image below how the midfield and defence are sitting in two banks of four and providing little space between them. The forwards will gradually look to close the play down and force the opposition into wide areas, were they will look to press more aggressively. 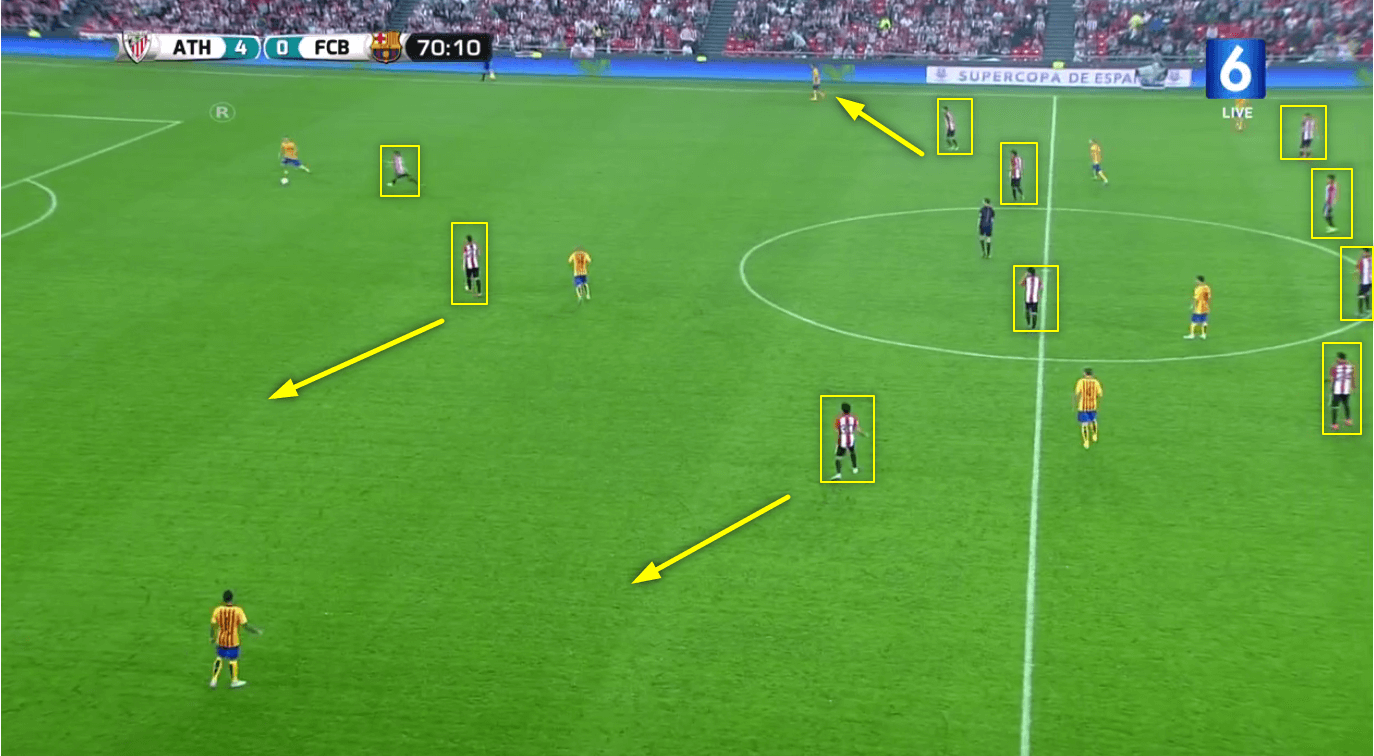 They maintained a compact shape to stop the opposition from playing through the middle of the pitch. This forces an opponent into trying to be more creative and again increases the risk of losing possession.

When Valverde left Athletic Bilbao in 2017, he joined FC Barcelona. He spent two seasons at Camp Nou where he won two La Liga titles and one Copa del Rey trophy. Once again he adapted his tactics to that of the players he had available. However, at Barcelona because of the quality of players and the profile of players the system had to be built to accommodate the players and the club’s philosophy.

His time at Athletic Bilbao will show a greater interpretation of the tactics he will look to implement the third time around.

This tactical analysis has focused on the attacking and defensive tactics deployed by Ernesto Valverde during his 2nd spell in charge of Athletic Bilbao.