Ross County’s signing of former Swansea City midfielder Yan Dhanda has been one of the most eye-catching deals of the Scottish summer transfer window so far.

The Dingwall club reportedly beat off competition from clubs in the EFL Championship and MLS to land the former England under-17 international on a two-year deal earlier this month.

Dhanda, who started his youth career at West Bromwich Albion before spending five years in Liverpool’s academy, fell out of favour at the Liberty Stadium last season making just seven appearances as his contract ran down.

However, he made 27 appearances and racked up 1,447 league minutes the season before as the Swans only narrowly missed out on promotion to the Premier League, losing out in the play-off final at Wembley to Brentford.

Ross County manager Malky MacKay has now convinced 23-year-old Dhanda that the Scottish Premiership is the best place for him to rediscover some of the form he showed in the 2020/21 season.

In this tactical analysis piece, in the form of a scout report, we will take a closer look at Dhanda’s playing style. It will be an analysis of Dhanda’s statistics from his time at Swansea, as well as his role in the Swans’ tactics to assess just how big an impact he could have in Scotland this coming season.

Dhanda is a right-footed central attacking midfielder (CAM). Under Steve Cooper at Swansea in 2020/21, Dhanda was most often used as the ‘10’ behind the two main strikers in Cooper’s favoured 3-4-1-2. He was also used as a central midfielder on occasion.

A natural attacking midfielder though, Dhanda has excellent ball control and is most dangerous dropping in between the lines. Comfortable with his back to goal too, he is capable of either playing the ball back with one touch or turning and looking to shoot. 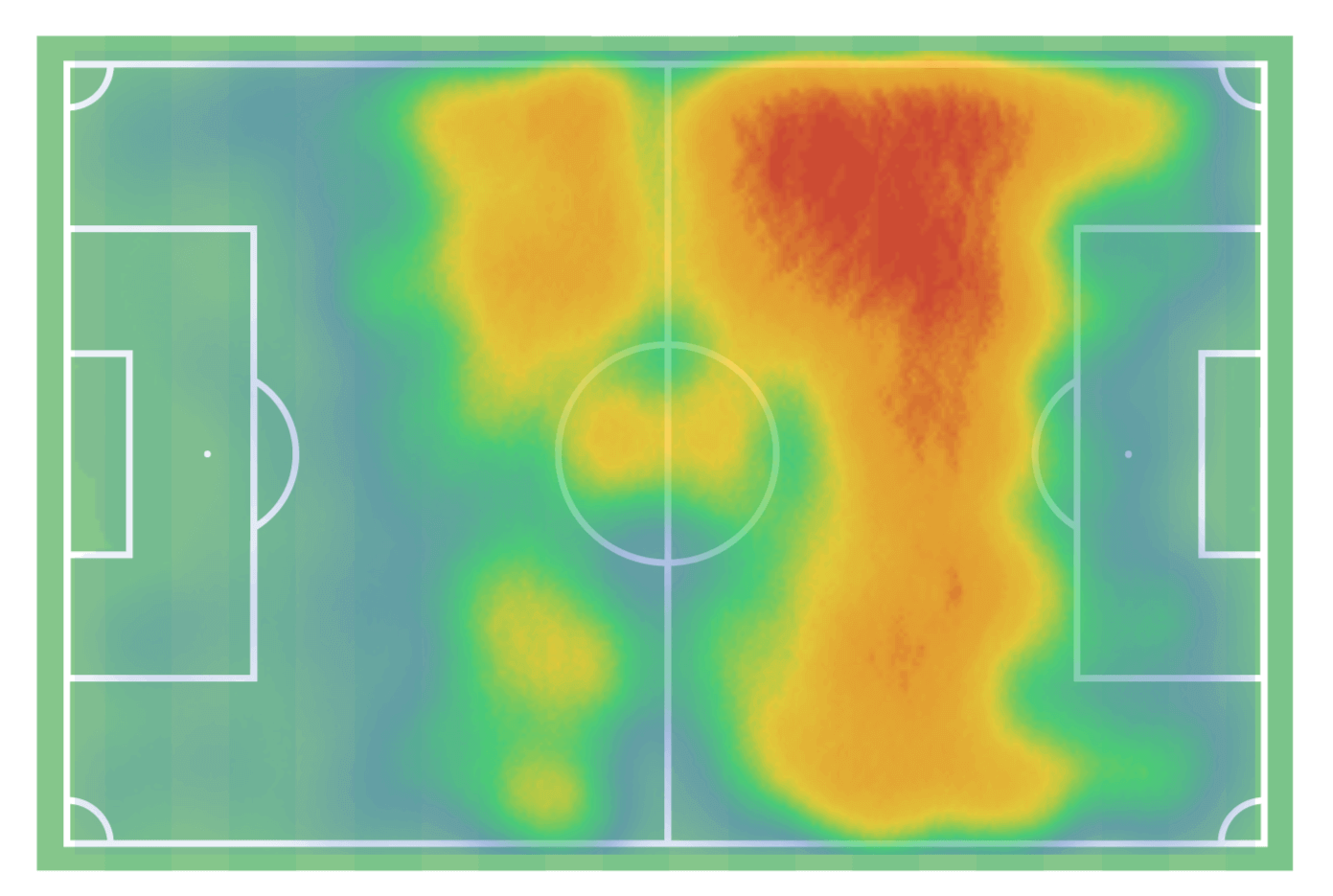 He likes drifting into the half-spaces to receive the ball so as to carry the ball further up field or cross into the box. He very much favours the left halfspace, as we can see in the above heatmap from the season before last.

Drifting into these areas allows Dhanda to get on the ball and open up the right side of the pitch on his stronger right foot, where he can drive forward to take a shot or play a through ball for a teammate.

At 171cm and 63kg, Dhanda is a slight figure on the pitch. However, he possesses excellent balance and has good body movement which allows him to evade opponents and ride challenges when they come in. 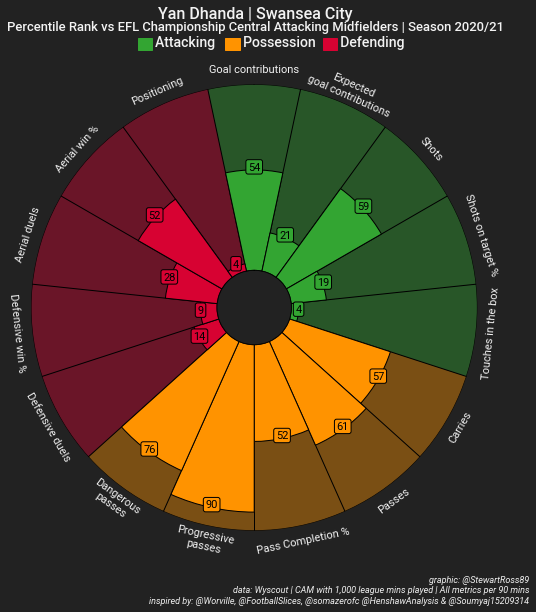 Looking at his pizza chart from 2020/21, which uses Wyscout data converted into percentile ranks to compare him with other central attacking midfielders (min 1,00 minutes played) in the league that season, we can build a clearer picture of Dhanda’s profile.

In the attacking section, we can see he had a contribution rank of just above average for players in his position, but this was a slight overperformance as he ranked below the bottom 25th percentile mark for his expected goal contributions. On shooting, he was over the average mark for the number he attempted per 90 but below for his on-target percentage. He also ranked quite low for touches in the box.

On possession, we can see he was just above average amongst CAMs for carries per 90 and his general passing and overall passing accuracy % were also around average. However, we start to see where Dhanda’s strengths lie with very impressive scores for progressive passes and dangerous passes (a combination of through passes and key passes).

Defensively, we can see Dhanda does not offer too much. His aerial duel success rate is actually above average but, compared to other CAMs in the league that season, he did not contribute off the ball much at all with low ranks for the volume of defensive and aerial duels and positioning (a combination of shots blocked and PAdj Interceptions).

As we have just seen in the pizza chart, Dhanda passes per 90 and his accuracy % were both around average for a central attacking midfielder in the 2020/21 EFL Championship.

However, he did rank very highly for progressive passes. His 6.5 per 90 was the third-highest average number of progressive passes attempted by all central attacking midfielders, minimum of 1,000 minutes played, in the league that season.

Consistent with his heatmap, this ball progression graphic, which also shows progressive runs, illustrates how Dhanda attempts most of his progressive passes to the left side of the pitch. Although this graphic only covers the last calendar year, and we know Dhanda did not play regularly over this period, we can clearly see this tendency to drop into the left half-space.

We can also see a high accuracy % for these types of passes, with only one of the 25 progressive passes included in this graphic not finding a teammate.

We can also see a nice range of passes which are looking to progress play for his team, from longer ones in deeper areas of the park to shorter ones in and around the box. 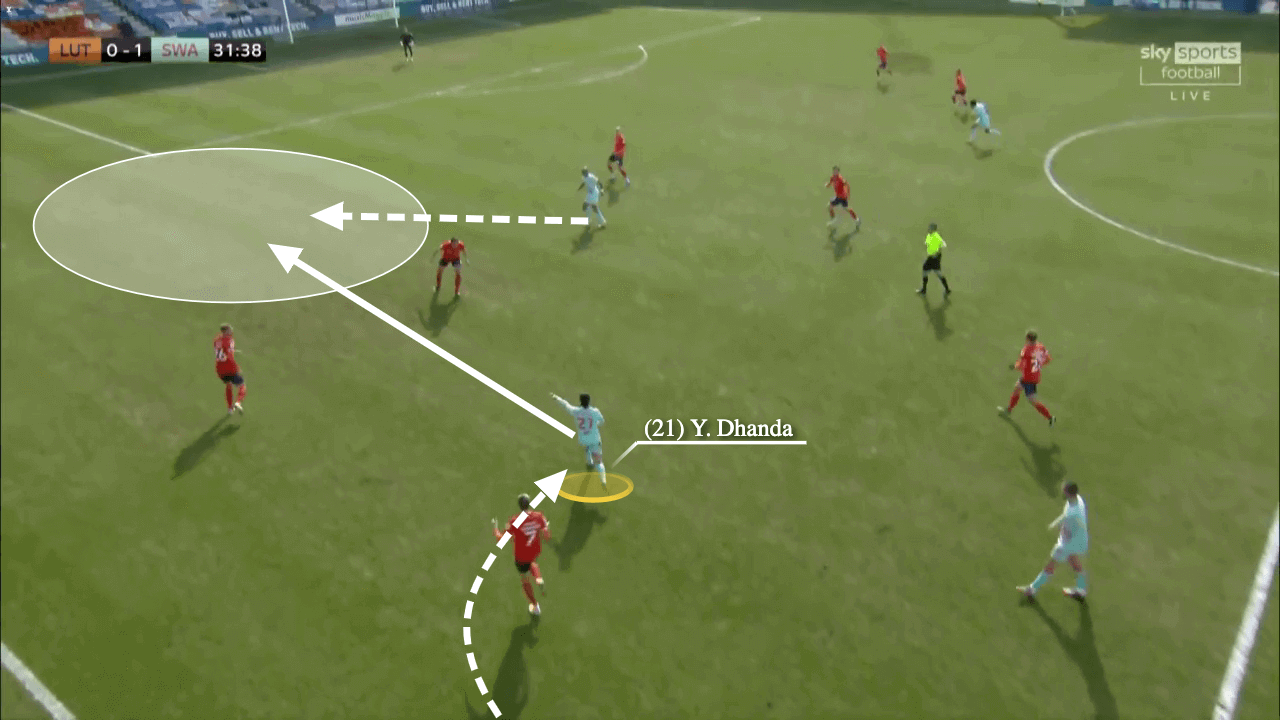 In this first still, we can see an example of how Dhanda drops deep to get on the ball to create. Away at Luton Town, he initially drops out to the touchline on the left side at about the halfway line.

Once he receives the ball from a teammate in the middle of the pitch, he shows good close control and decent speed to quickly carry the ball down the line, skipping by a covering Luton player and getting into his favoured position in the left half-space.

We can see Dhanda instructing the Swansea striker exactly where he wants him to make the run in behind. He then slides a nicely weighted ball beyond the Luton backline which the striker can then collect and drive into the box with. 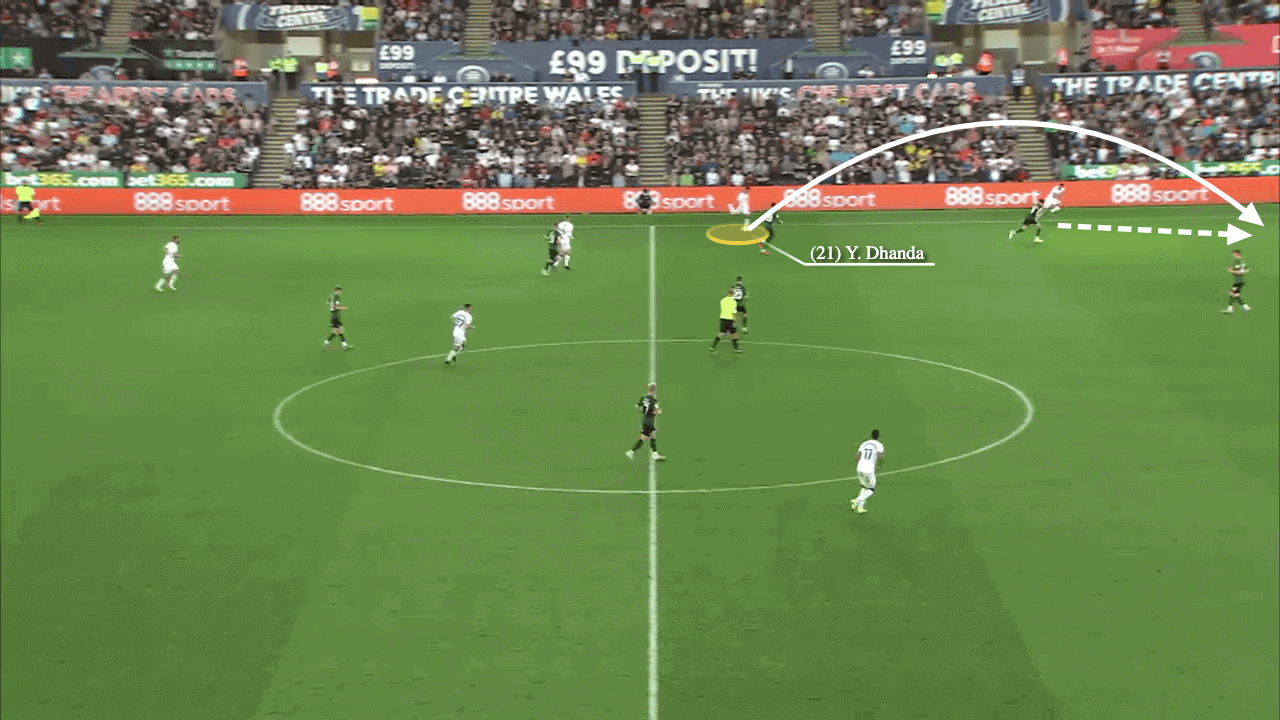 In this next example, from a game in the EFL Cup against Plymouth Argyle, we again see Dhanda dropping into this deep left position on the touchline. This time, rather than carrying, he plays a nicely weighted long ball down the line which gets his advancing teammate in behind wide left where he can cross early. 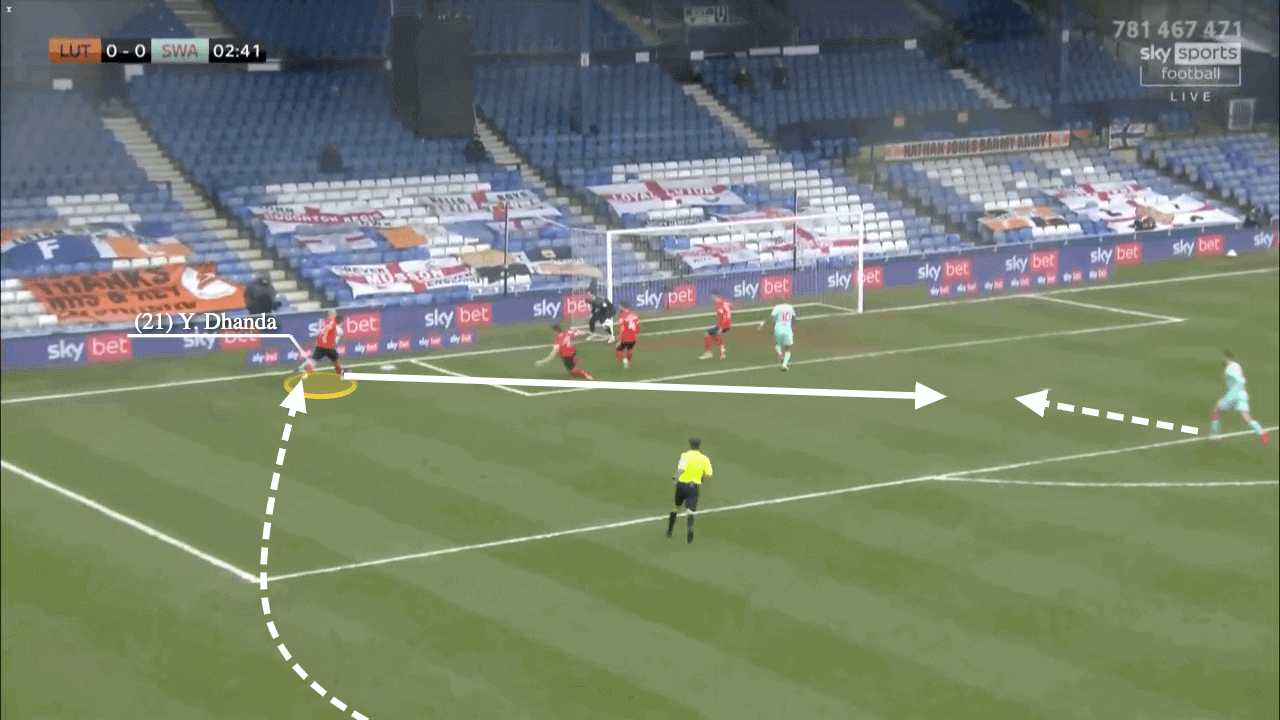 The next example, of one of his assists from 20/21, shows Dhanda’s further variation in his passing.

Again, attacking the inside left channel in the same game at Luton the season before last, Dhanda carries the ball well, once again showing good balance to skip by and get in front of his marker, to get to the touchline.

Once at the touchline, he displays good awareness to spot a teammate on the edge of the box before playing the ball into their path with an outside-of-the-foot pass. 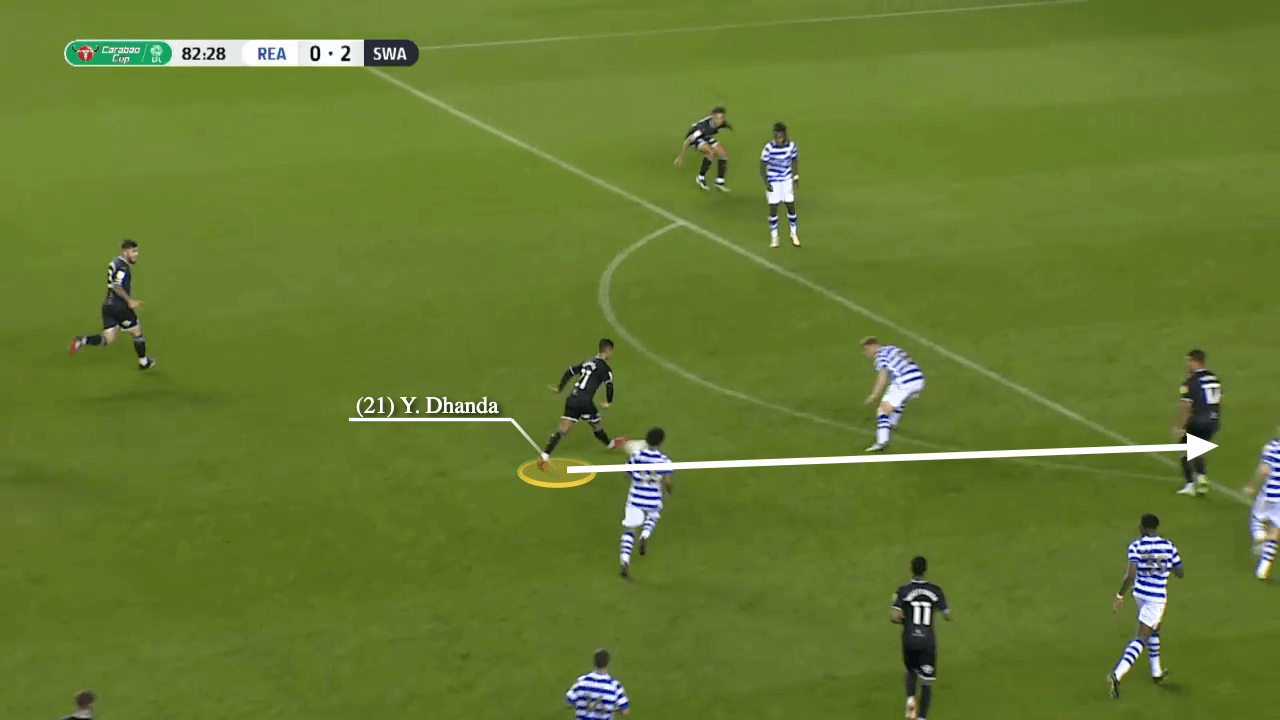 Another still, from an assist at Reading in the EFL Cup, shows another example of Dhanda’s capability of executing with the outside of his right. This type of pass, which can open up more angles of attack, is used by Dhanda in a more central area here, playing the striker through to finish.

Although not all these types of passes shown in these examples are always successful, we can see that Dhanda has the ability to produce the kind of passes that not many midfielders in the next season’s Scottish Premiership, certainly outside Celtic and Rangers, will have the ability to pull off.

As we seen in his pizza chart, Dhanda only ranked just above average for the number of shots attempted (1.71 per 90) for a CAM in the 20/21 EFL Championship, and quite low for his on-target percentage (28.1%).

However, Dhanda can still be a threat with his shooting and will likely get more opportunities to shoot in the Scottish Premiership.

Looking at his shot map for the 20/21 season, we can see his shots mostly clustered in the central areas on the edge of the box, with a more concentrated number on that left side, again consistent with his preference to drift into left half-space. 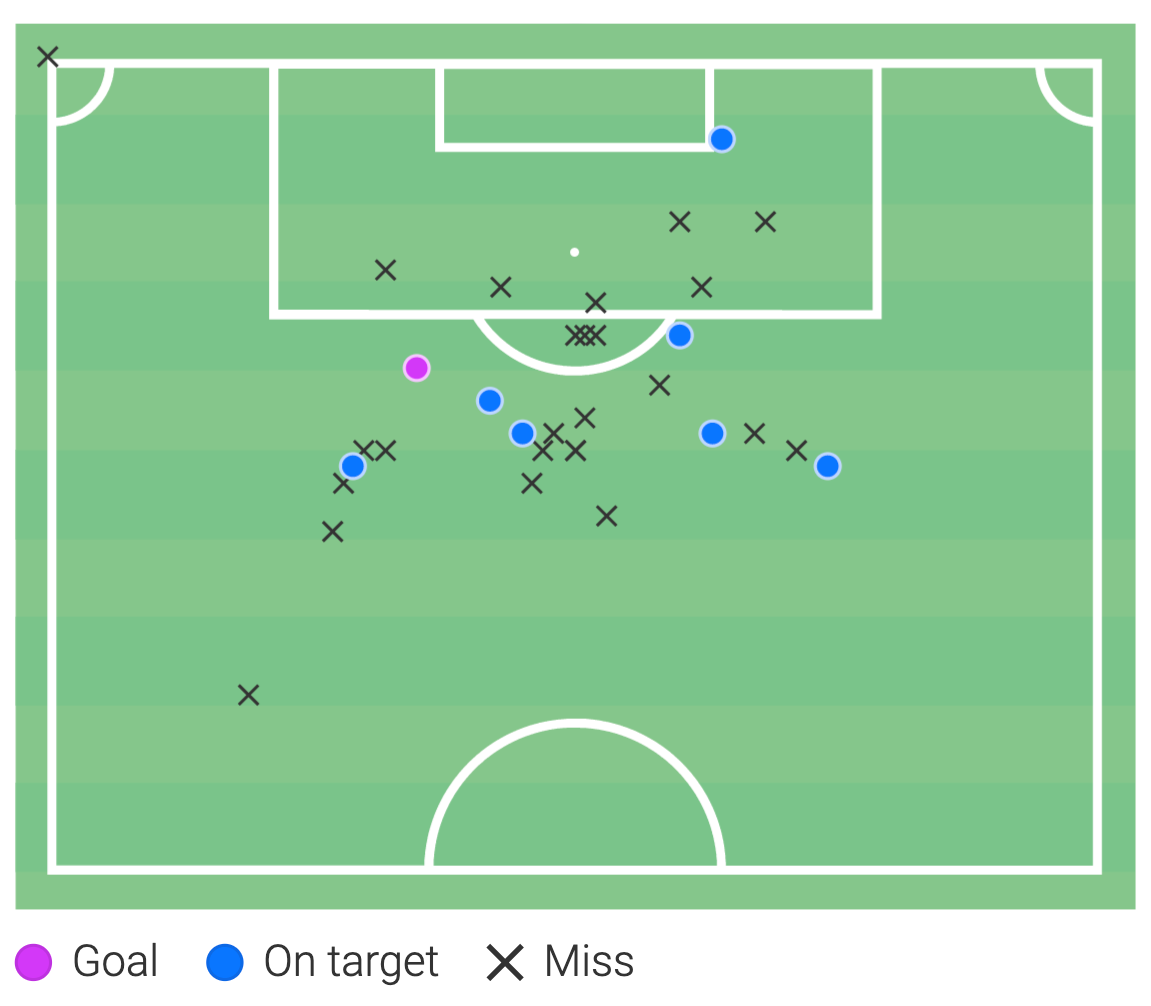 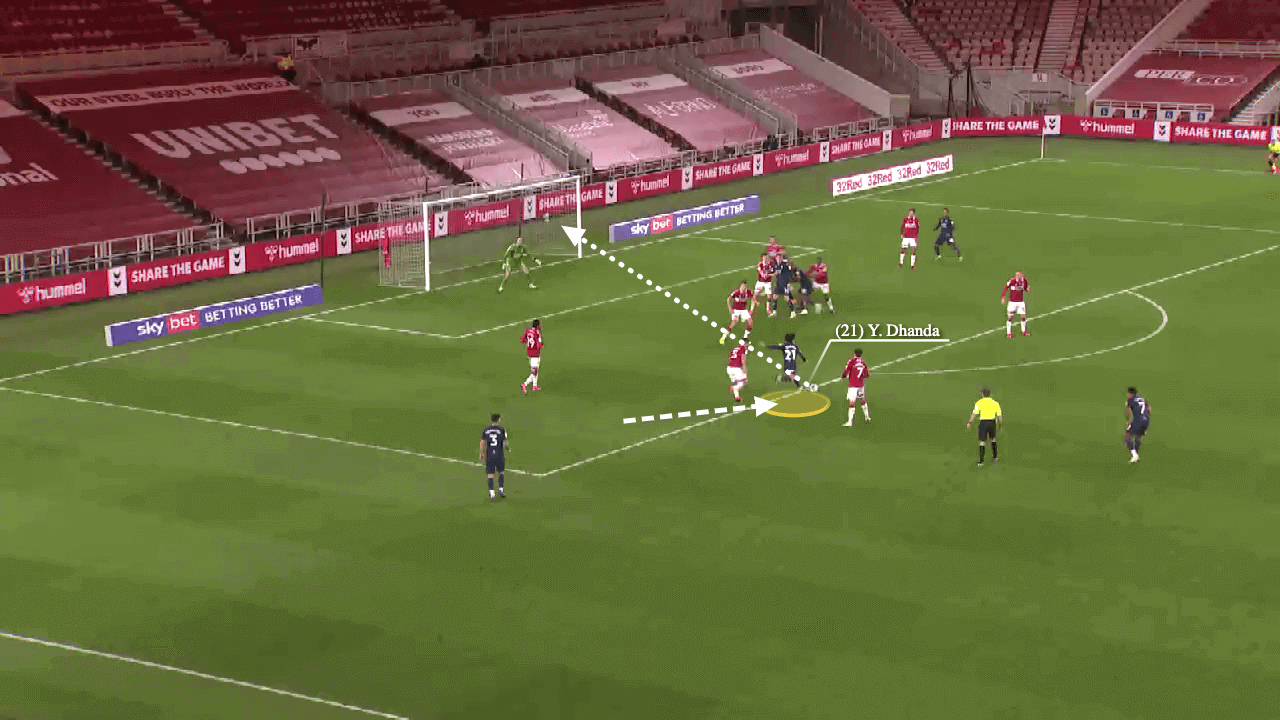 In this first example of his shooting, we can see Dhanda getting a shot off from his favoured position. Here he has drifted across from a central area to the left to receive the ball from the Swansea left-back, he then shows great balance and close ball control to evade the defender. This opens space for him to get his shot off, which finds the net via a deflection. 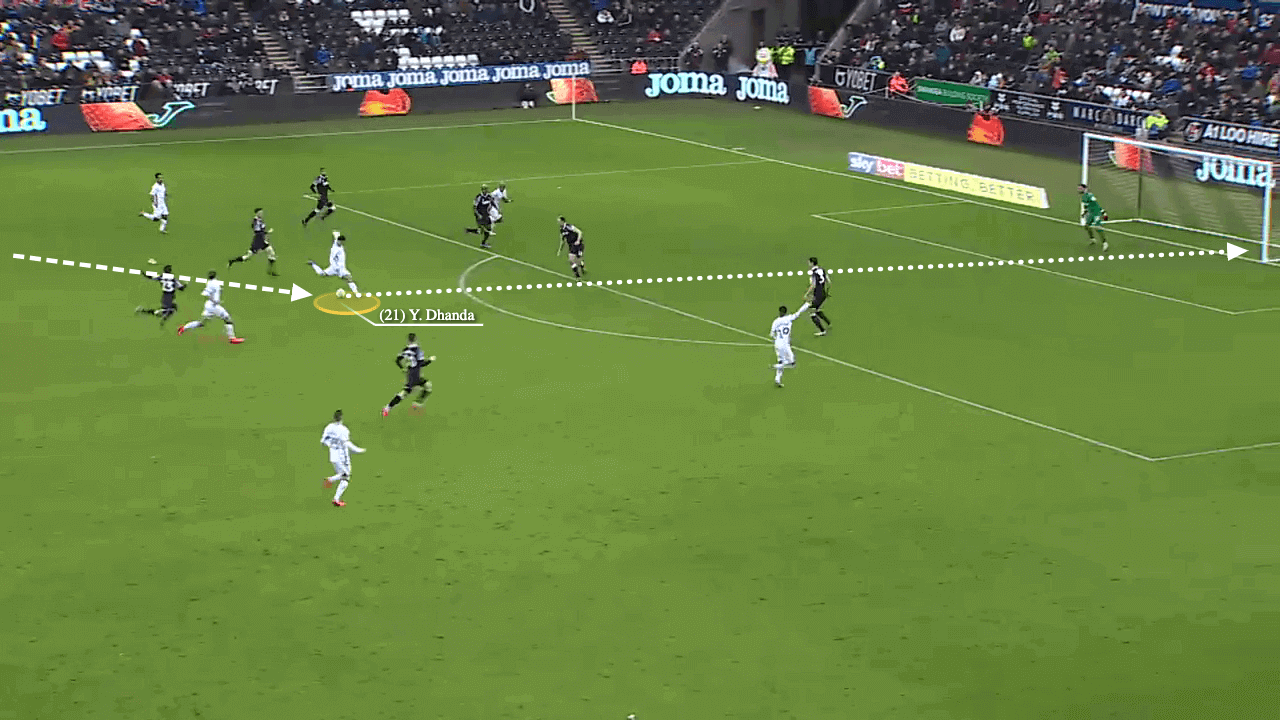 Here we see another example of a typical position that Dhanda likes to shoot from. In this example Dhanda picks up a loose ball in the middle of the park with his back to goal, he then quickly turns and drives into the edge of the box. His shot is not the most powerful but is well placed, low into the far corner to beat the goalkeeper.

As seen in his pizza chart, Dhanda does not offer too much defensively. He is not the quickest in defensive transitions and can often dive into tackles, which are also often mistimed. 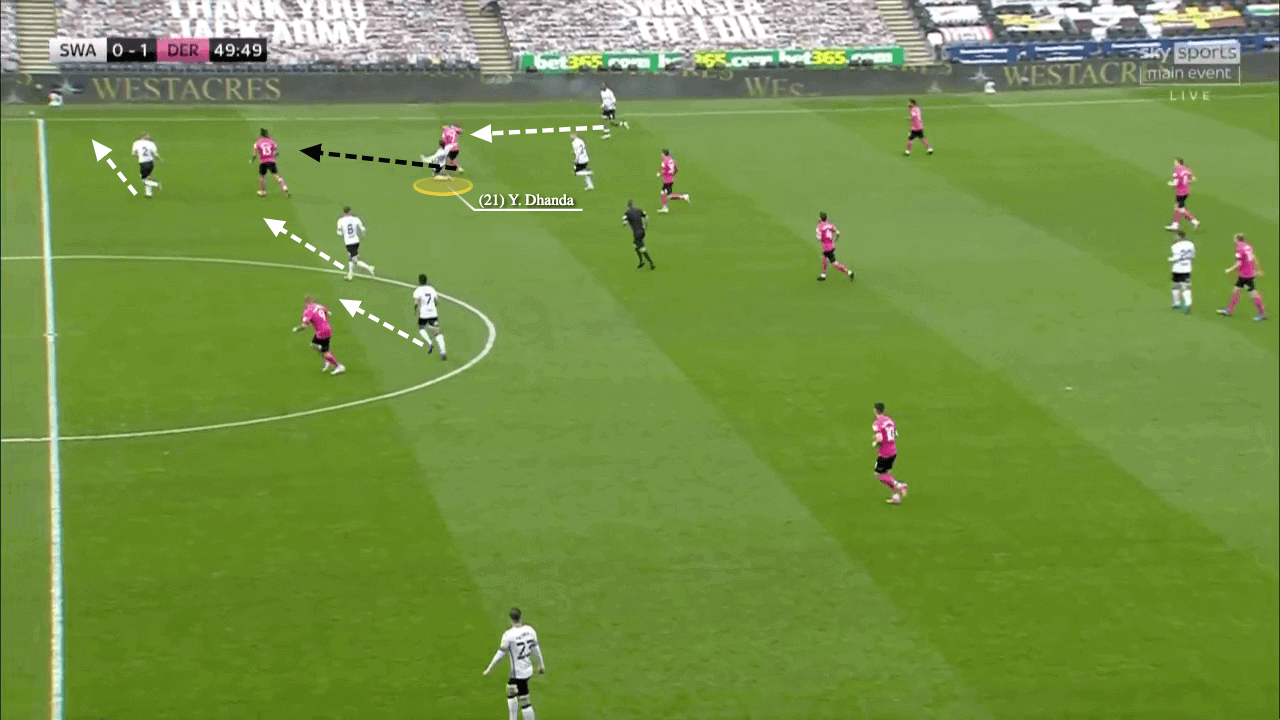 Here, we see a typical example of Dhanda diving into a tackle. In this situation, the Derby County player is carrying the ball into a wide area and does not appear to have too many options. Swansea also have several other players dropping into position to cover.

Dhanda would be best placed to stay on his feet here and keep tight to his man, as even if there is an opportunity to win the ball, he rarely demonstrates good timing and, as is the case in this example. He dives in, doesn’t win the ball, and gives away a foul. 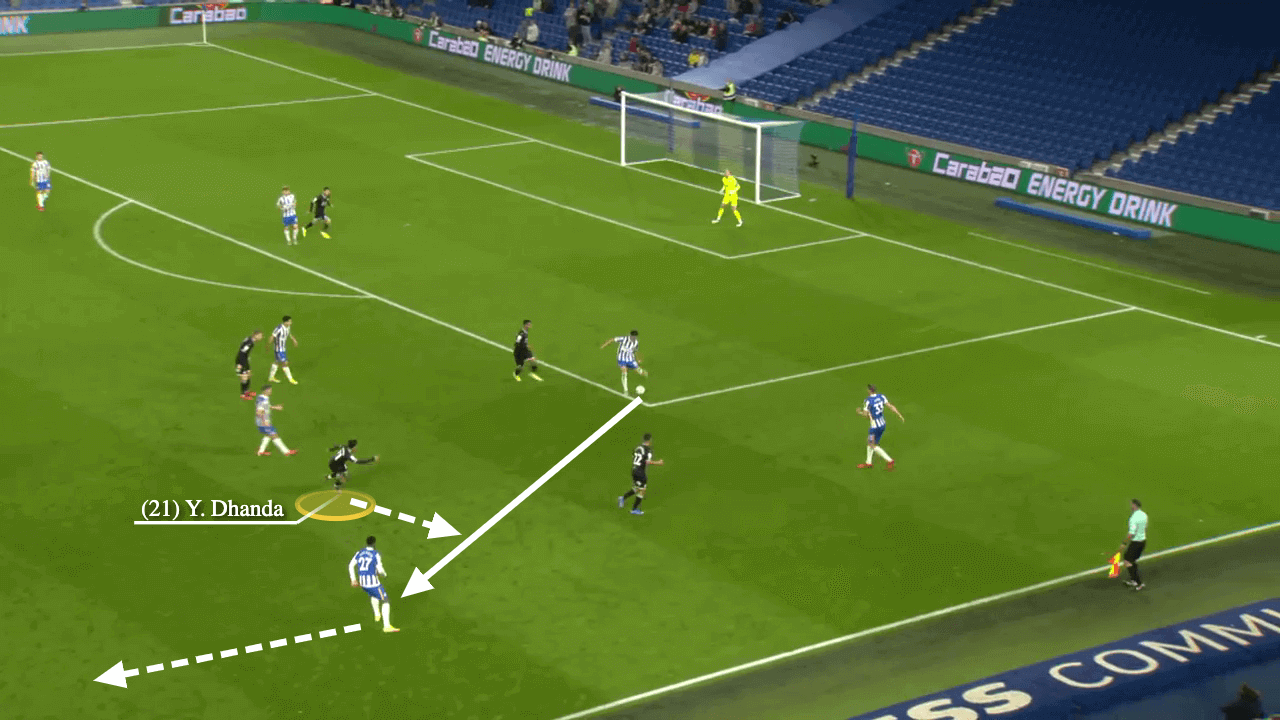 He also does not possess much defensive awareness. Away at Brighton in the EFL Cup last season, we can see Dhanda is not quick enough to spot the out ball for the Brighton defender in this situation. He does move into the path of the ball but is unable to cut it out and Brighton can carry the ball up the channel. Dhanda does also track back but does not have the pace to catch the opponent as Brighton progress the ball through the middle third.

With Malky Mackay favouring a 4-2-3-1, and Dhanda appearing a natural fit for the central attacking midfielder behind a lone striker, it may well be that he is not tasked with too many defensive responsibilities at Ross County.

This will suit both him and the club, as we have seen that Dhanda’s strengths are in an advanced playmaking midfield role, and for County, this would best utilise a player who has the potential to be by far their most creative player next season.

Dhanda undoubtedly has the potential to be a real standout in the Scottish Premiership next season.

If Mackay can get Dhanda anywhere near those levels he has shown previously for Swansea, particularly that 2020/21 season which we looked at in detail here, then Ross County will have pulled off one of their best pieces of recruitment in recent times in Scottish football.

If he does get near those levels then he will give the Highlands-based side a great chance of achieving their goal of replicating or even bettering their surprise top-six finish from last season.