The later months of the season have major significance to teams within the division, but the reason of importance varies deepening what part of the table you lie.

Regarding the EFL Championship, teams such as Peterborough United and Derby Country are fighting nail and claw to keep their place for next season, while the likes of Coventry, Middlesbrough and Blackburn Rovers are battling it out to displace Sheffield United, who currently obtain the final place-off place.

Both Luton Town and Nottingham Forest are aiming for a higher finish and have essentially secured their play-off spaces – but have an eye on automatic promotion, which made their matchup on Friday afternoon even more consequential.

During the last couple of seasons, Nottingham Forest have been quite inconsistent, finishing 17th, 9th, 7th and 17th again. Steve Cooper, former Swansea manager has breathed new life into the once upon a time European Cup winners.

As for Luton Town, their transformation has been quite remarkable under Nathan Jones. Jones left his roles within Brighton’s set-up, and at the time of the Welsh coach’s appointment, the Bedfordshire club were in League Two. Jones discussed how most doubted he would be a success, due to the quality of players at his disposal, in conjunction with the style of football he wants to utilise being a stark contrast. Jones wanted a challenge, and he certainly received one at Luton. Year after year they climbed through the leagues, and eventually ended up back in the Championship, a league they had not competed in since 2006. After finishing 19th and surviving their first season, Jones made slight alterations regarding player recruitment, and they have not to look back.

Luton Town made use of a 3-1-4-2 formation. James Shea started in goa, with Reece Burke, Sonny Bradley and Amari’i Bell within the back three. The wing-back roles were occupied by Fred Onyedinma and James Bree. In midfield, Kal Naismith, Allan Campbell, and former Premier League player Robert Snodgrass. Harry Cornick and Elijah Adebayo lead the line regarding Luton’s attack.

The away side made use of a 3-4-1-2 formation. Brice Samba started in goal. The back three included Scott McKenna, Tobias Figueiredo and Joe Worrall. Djed Spence played as Forrest’s right wing-back, while Jack Colback occupied the left-hand side. James Garner and Ryan Yates formed the double pivot. In attack, Lewis Grabban was utilised as Steve Cooper’s number ten. Just ahead of him were Brennan Johnson and Keinan Davis as a striker duo. Overall, both sides contrasted in some ways; Steve Cooper’s side look to put their stamp on this match as they wanted to control possession of this match. Additionally, the away side looked to play out and progress through the third, on the other hand, Luton made use of a different way of play. Luton’s play was varied— the home side at times was direct, looking to construct attacks quickly with long balls from the goalkeeper. At the same time, Luton was prepared to play out when the time was right and was success progressing through a third of the field on the odd occasion.

Steve Cooper’s side came into the away game with a clear way of play. His front free, which was formed by Lewis Grabban, Brennan Johnston and Keinan Davis was incredibly fluid. At the time Keinan Davis would drop deeper to facilitate build-up, while Johnstone play as a makeshift striker. Overall, the most common pattern showcased by Forrest was when Lewis Grabban and Keinan Davis would occupy the left half-space. From this position, the centre-forwards can combine with teammates, stretch the Luton defence and create openings. At times this tactic did work.

Here we have James Garner in possession of the ball, attempting to penetrate Luton’s backline. Both Keinan Davis and Lewis Grabban are positioned in the left half-space and both strikers do well to coordinate their movements. Davis darts into the space between Luton’s outside centre-back and central centre-back. While this movement took place, Lewis Grabban made the opposite run, as he wanted to occupy a wider position. 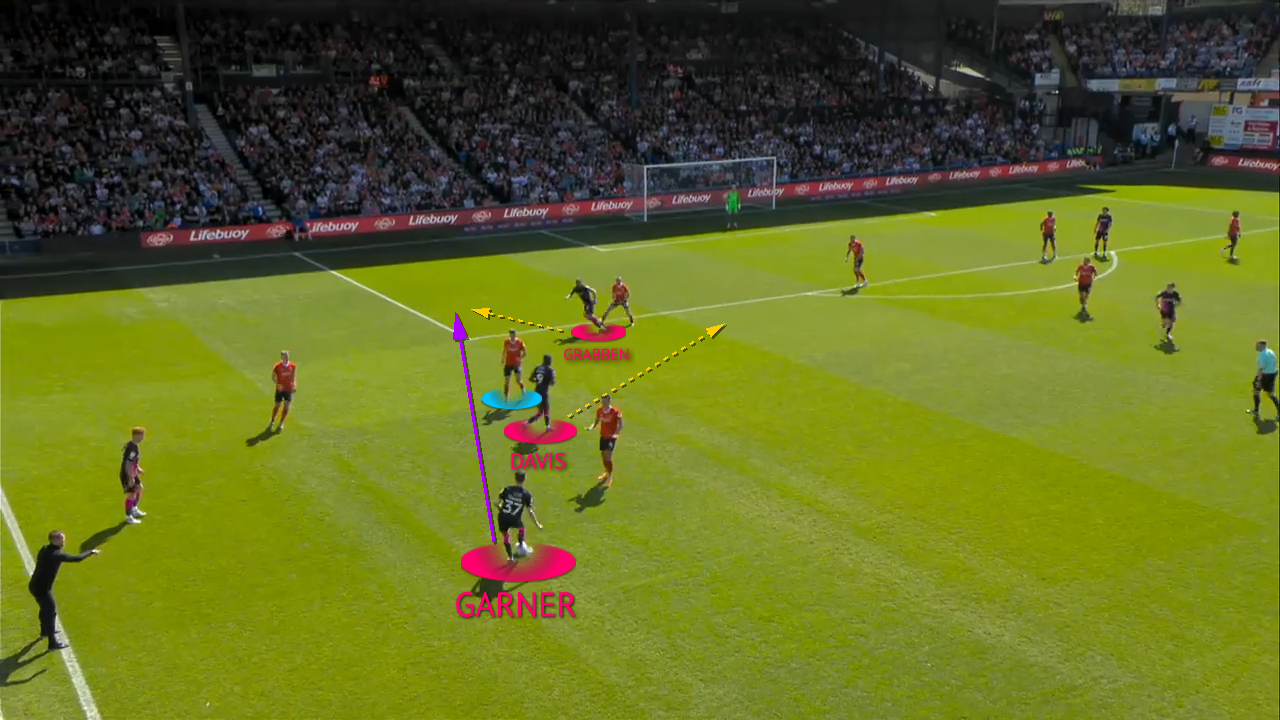 Instances of this precision and quality did occur, but not to the frequency Steve Copper was hoping for, resulting in a lacklustre attacking display from Nottingham Forrest.

A crucial reason Forest’s attack could not get going was due to the pressing system employed by Nathan Jones and his men. Luton made use of a 5-3-2 formation when out of possession; both central strikers, Harry Cornick and Elijah Adebayo pressed from the front passively when Forest’s centre-backs had the ball. Luton’s main aim was to deny their opponents passing into their double pivot, meaning the ball would have to be shifted out wide. When this occurred, Luton truly got to work when to work. On many occasions, Luton would create these three versus three situations, condensing the space in the wide areas and denying any sort of possession through those avenues.

Here, one of Nottingham Forest’s centre defenders is in possession of the ball, attempting to build out from the back. From this point, we can see the three on three. Luton’s wing-back Onyedinma pushed higher to support the press. Striker, Elijah Adebayo the opposition’s central midfielder, while Snodgrass denied an inward pass into the front three for Forrest. 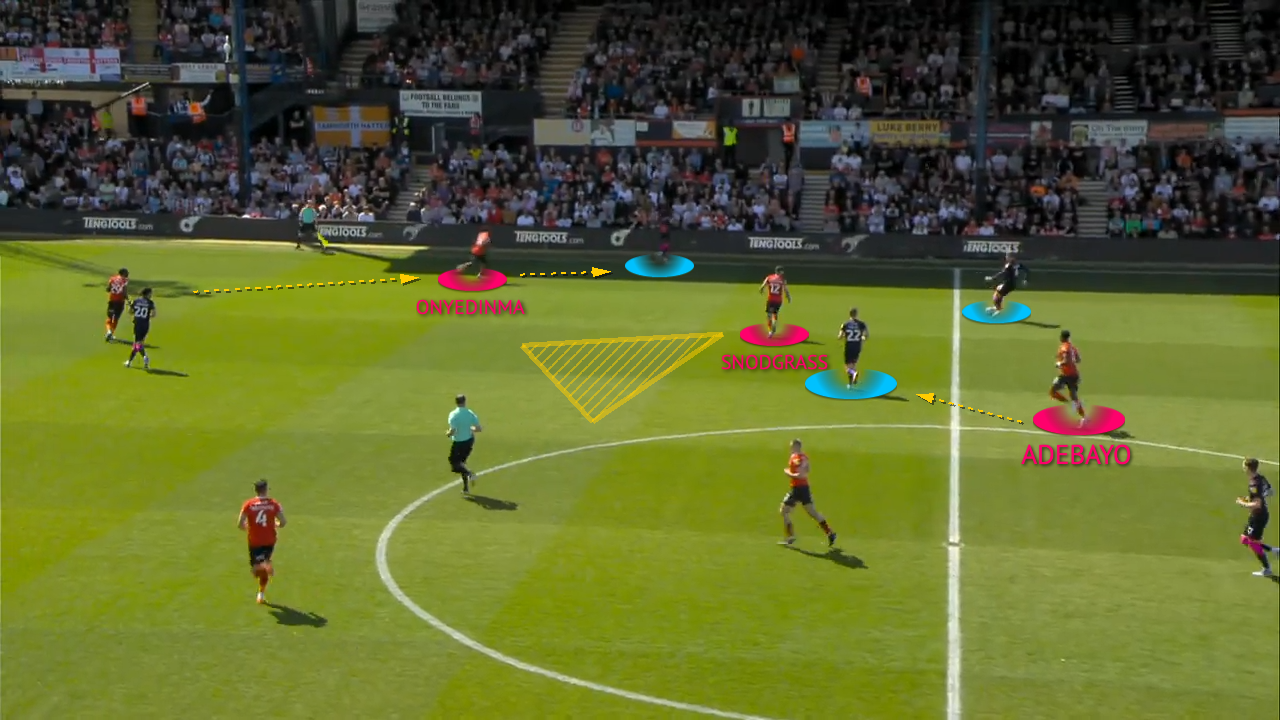 This tactic was quite convenient for Luton, as they were able to win the ball back quite high up the field; being able to apply pressure at a quicker rate. Additionally, Luton made use of other defensive strategies, their number six, Kal Naismith man-marked Nottingham Forrest’s number ten, denying him the freedom to roam, as well as killing off central passes. As mentioned prior, at times, Luton’s front two would initially make use of a passive press; the striker duo and the double pivot slightly deeper would make a box shape, against Forrest’s midfield pair of James Garner and Ryan Yates.

Before this game began, a major talking point was made regarding how both team’s wing-backs would fair, going head-to-head, especially in the matchup between Fred Onyedinma and Djed Spence. Onyedinma has had a good season since he arrived from Wycombe, scoring three goals and assisting four. Djed Spence has attracted the likes of Spurs and Bayern Munich due to his performance for the Midlands club since joining on loan for Middlesbrough. On the other side for Luton’s James Bree against Jack Colback. Colback is a central midfielder by trade but has fared quite well within this new role. Furthermore, being of his midfield experience, he can cut inside, operate centrally and combine with others.

Djed Spence in previous games for Forrest plays a massive part in the team’s ball progression, as he obtains fantastic ball retention, along with his technical ability and dribbling prowess, allowing him to bypass a team’s press. The home side was well aware of the threat the young English wing-back possessed and had a plan to stop Spence.

As mentioned previously, Luton created a three on three when Forrest was in the build-up phase and Luton’s line of engagement was slightly higher. When the home side was in a medium to low block, Onyedinma would man-mark Spence denying him space to penetrate Luton’s backline. Onyedinma man-marking continued even when the ball was on the opposite side. 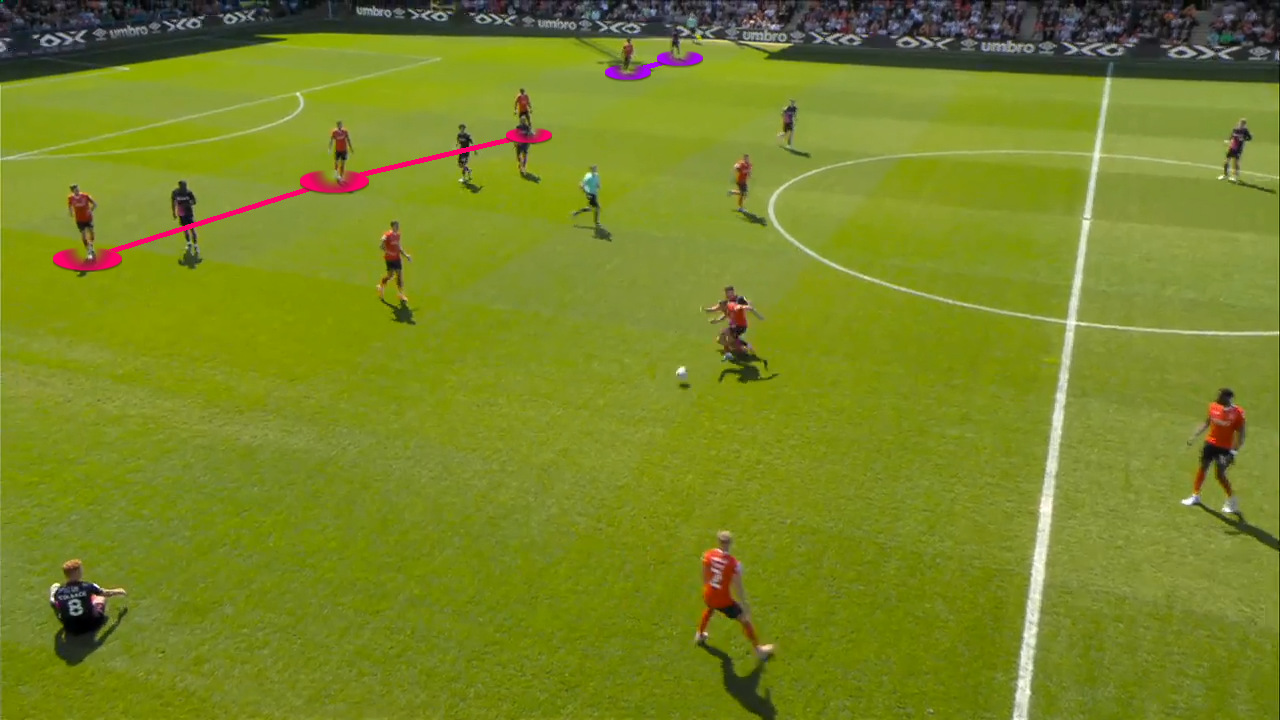 Both Luton Town and Nottingham Forest have come a long way. It seems Forrest has surpassed the stage of inconsistency look destined for bigger and better things since the appointment of Steve Cooper. Luton Town’s meteoric rise continues as a place in the Premier League, an accomplishment they have never achieved since the league’s introduction, is a legitimate possibility, instead of a pipe dream. The game between these two sides was incredibly significant, due to both sides vying for the same places on the tables. Forrest had a larger portion of possession, but Luton controlled the game based upon how Nathan Jones set up his team to play when out of possession. Forest wanted to move through the thirds, and Luton made use of a passive-aggressive pressing system; a tactical ploy to force Forest into wide areas and apply a good amount of pressure. Overall, Kal Naismith’s penalty won Luton the game, and Nathan Jones will be proud of his side, as the Championship is coming to a close and places are there to be won.